The first half of the week we backpacked to Ice Lake. Originally our plan for the second half of the week was to head to the Blue Mountains west of Baker City. But the forecast called for a lot of smoke there so we decided to head north into Washington instead. (Later we would learn that the forecast was wrong and the smoke cleared out of that area.)

After a very long day of driving across Washington we crossed Stevens Pass on Highway 2 and pulled into the Beckler River Campground where we grabbed a campsite (boy, it’s so much easier to find a place to camp on a weekday than on a Friday night!)

The forecast today called for partly sunny, which in the mountains usually means “mostly cloudy, so forget about any views.” So we decided to hike the Iron Goat Trail, a nice interpretive trail that was brought about thanks to the efforts of the now defunct Volunteers for Outdoor Washington, and others. (A wonderful guidebook can be found online.) A sign at the trailhead informed us:

In 1990 Volunteers for Outdoor Washington established a partnership with the USDA Forest Service to construct, maintain, and interpret the Iron Goat Trail. Many other organizations worked with them in this endeavor. Hundreds of volunteers working thousands of hours built the Iron Goat Trail.

This big red caboose greets hikers at the trailhead: 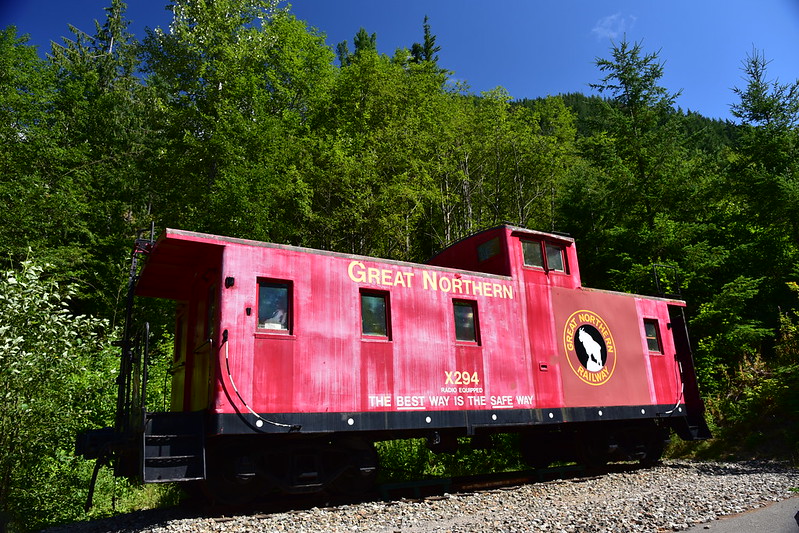 Interpretive signs at the trailhead explained how John F. Stevens looked for a railroad route over the Cascades by following creek after creek to its headwaters and encountering a lot of impenetrable terrain. He finally identified a promising route over the pass that would later bear his name. The Great Northern Railway opened the new rail line in 1893; it was considered a great engineering feat. They employed the use of switchbacks, tunnels, and snowsheds to get their trains safely through Stevens Pass.

It wasn’t an easy job, though. When coal-fired steam engines got stuck in a tunnel the exhaust could overpower the passengers and crew.

In one disastrous incident, nearly all of the passengers and crew were overcome by exhaust. With the engineer and most of the passengers unconscious, a crew member was able to unlock the brakes and roll the train back out of the tunnel, narrowly averting a tragedy.

After that the tunnel section was electrified. But that wasn’t the only problem. After 96 passengers and crew were killed when an avalanche swept two snow-bound trains off the tracks in February 1910, the Great Northern built seven miles of snowsheds and tunnels to protect their trains. But the cost of maintaining them and keeping the line open in winter led to the construction of the 7.8-mile-long Cascade Tunnel at a lower elevation, which was completed in 1929. The completion of the Cascade Scenic Highway in 1925 allowed cars to also travel this route.

We started off in a green forest: 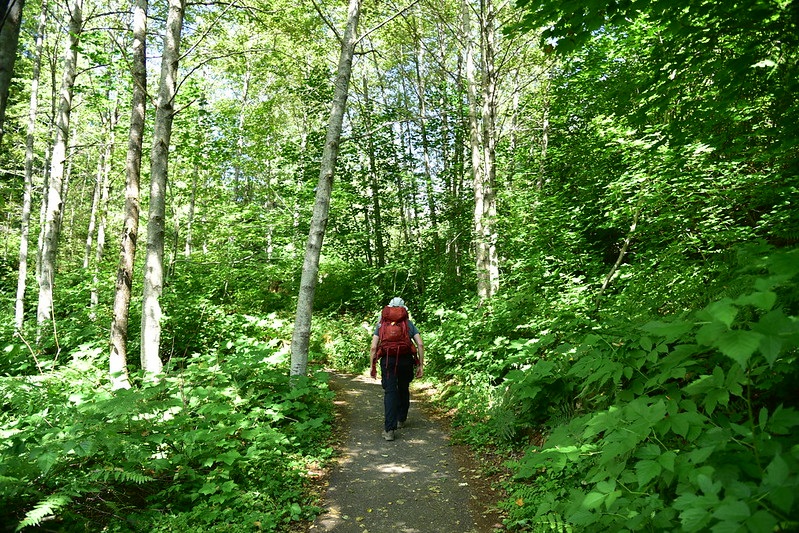 We soon came to one of the walls of an old snowshed, which was a third of a mile long. The Great Northern built 6.4 miles of snowsheds along 9 miles of track to protect their trains from avalanches. This one was built in 1913, and although the wooden roof and second wall are long gone, this concrete wall remains: 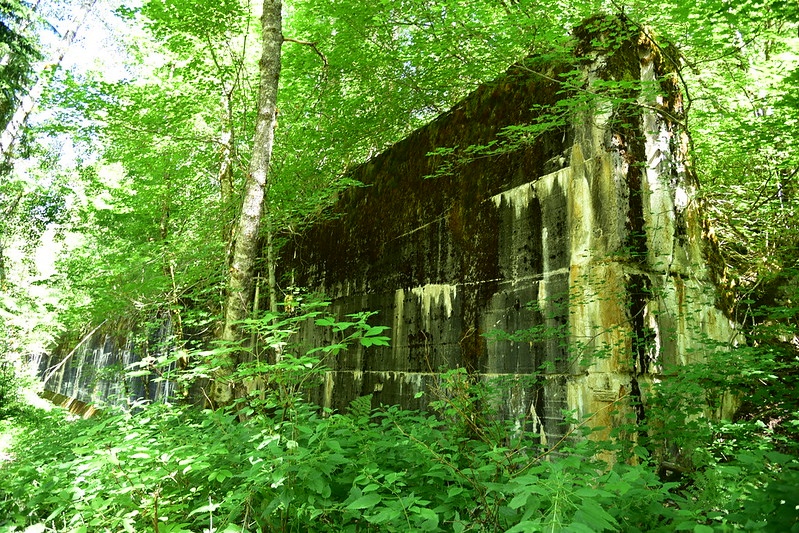 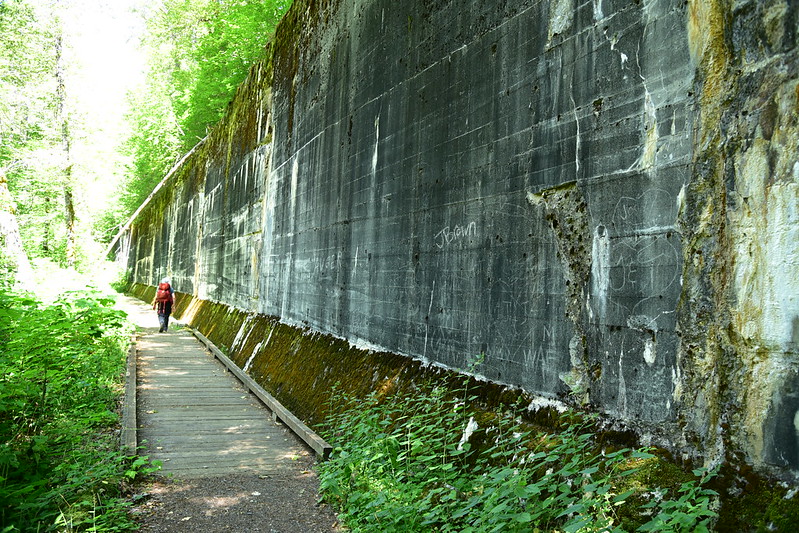 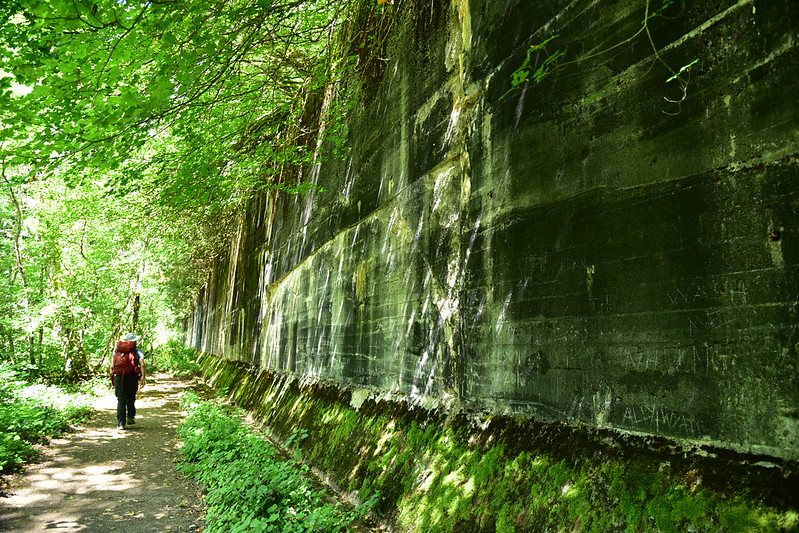 The first of several tunnels we would encounter: 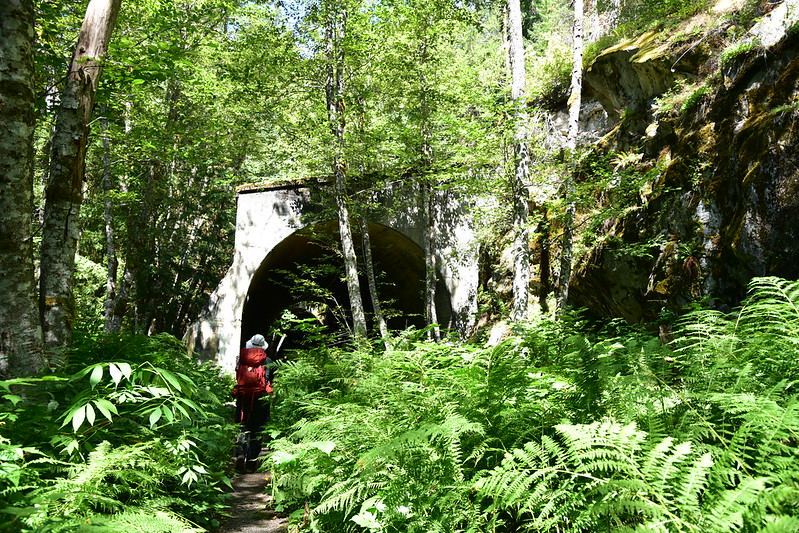 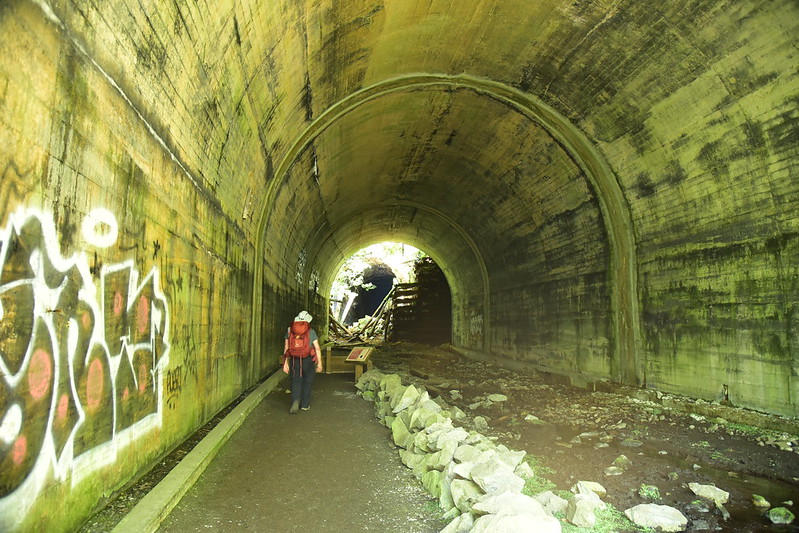 This little “tunnel” is called and adit and was used to gain access to the center of the train tunnel: 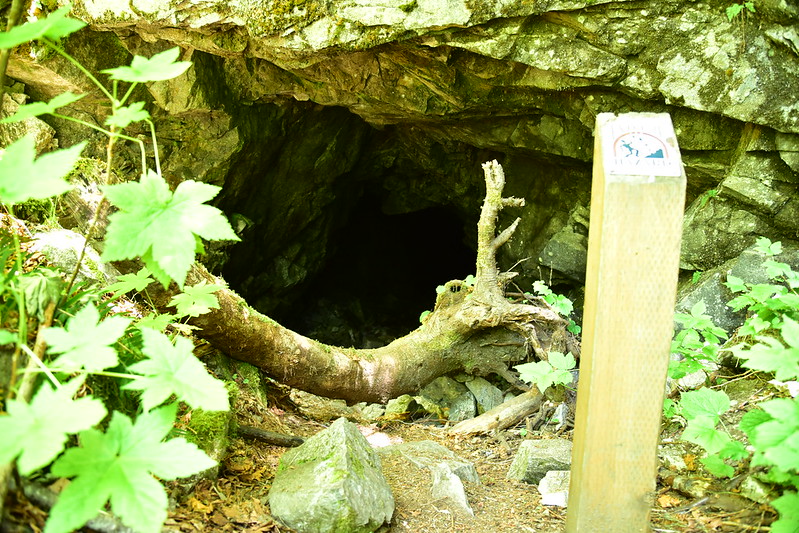 We passed the Twin Tunnels. 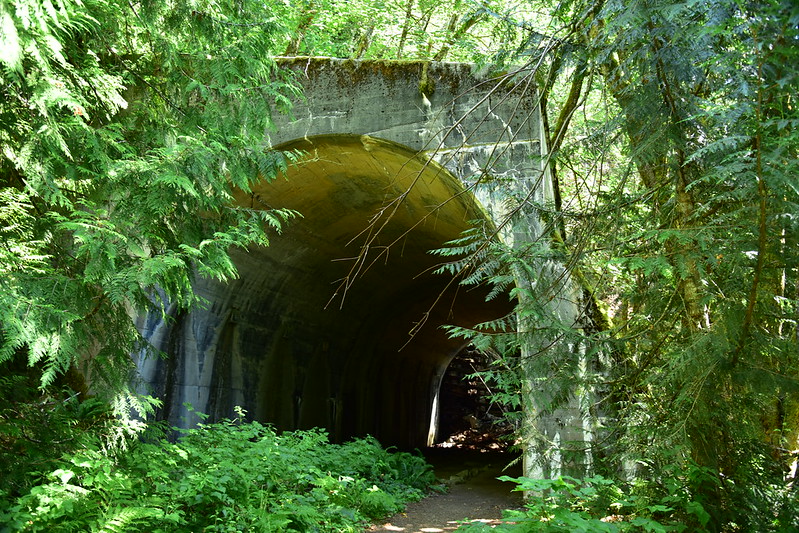 Obviously most of these are not safe to enter anymore: 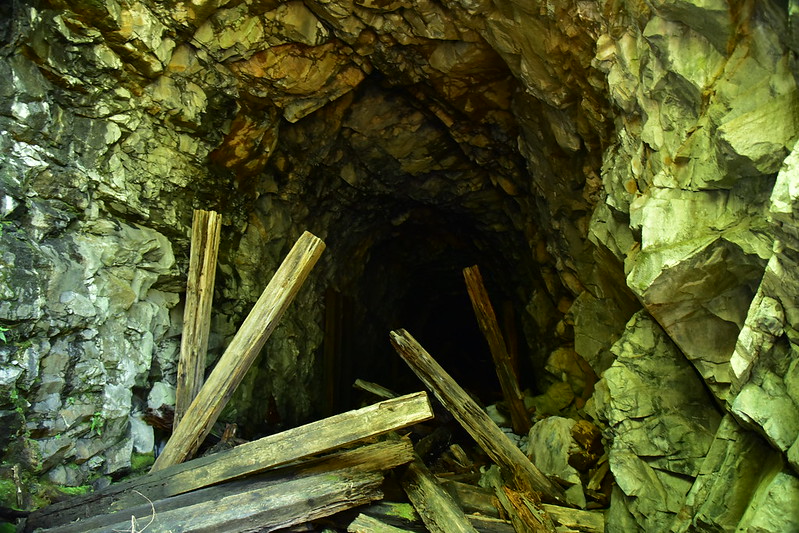 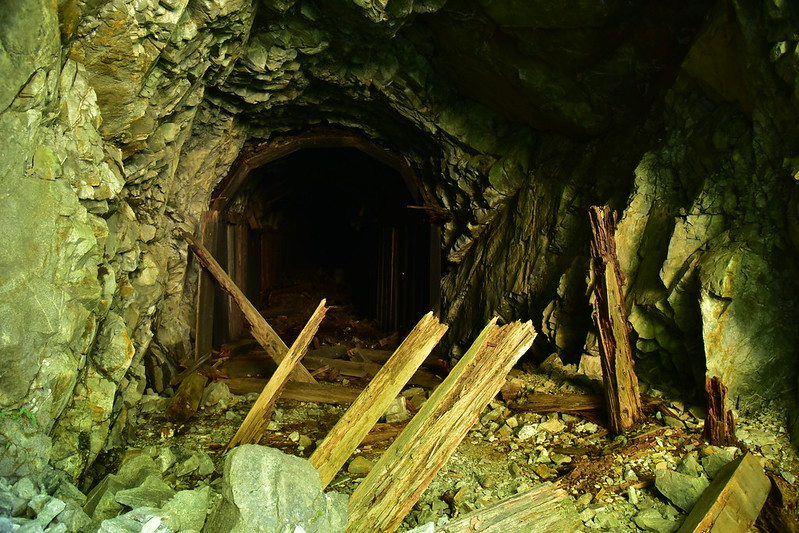 I loved this footbridge: 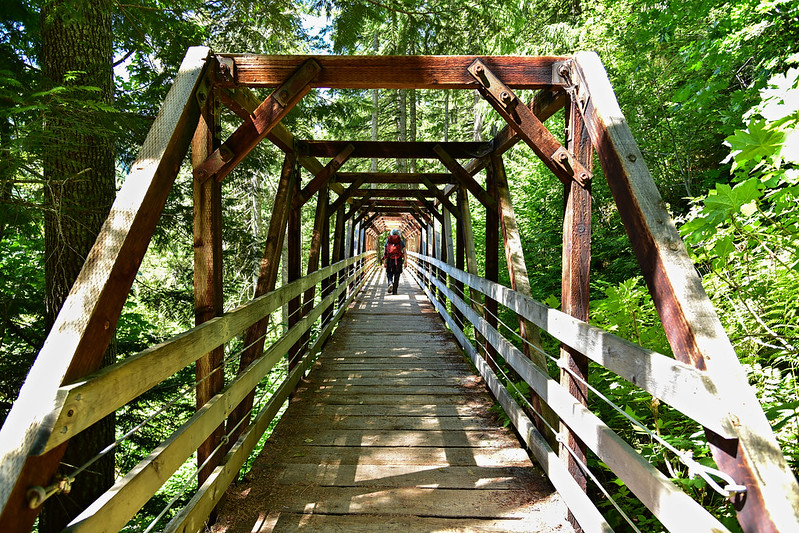 We took the Corea Crossover Trail which went uphill and connected to the upper part of the old rail line, then headed back east. We followed a spur trail to this timber spillway that was built in 1910 as part of the Great Northern’s fire protection system. It was accidentally discovered by a work party in 1910: 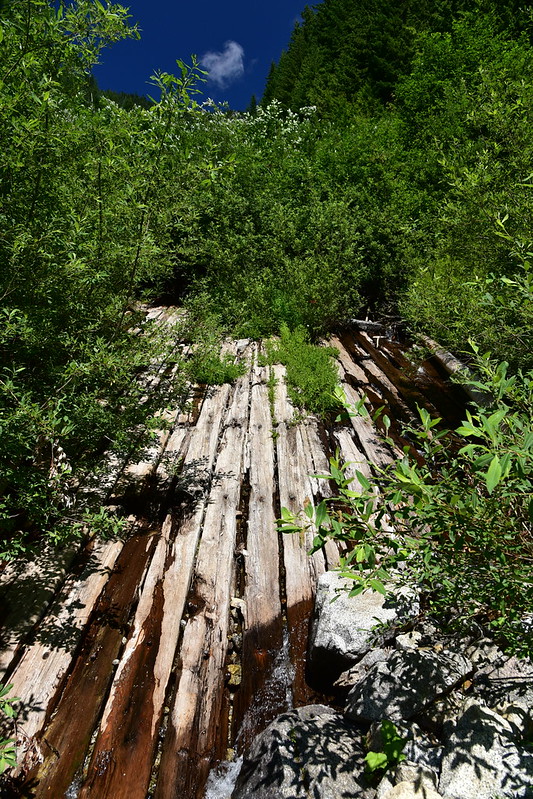 The vegetation opened up and we got some views of nearby mountains: 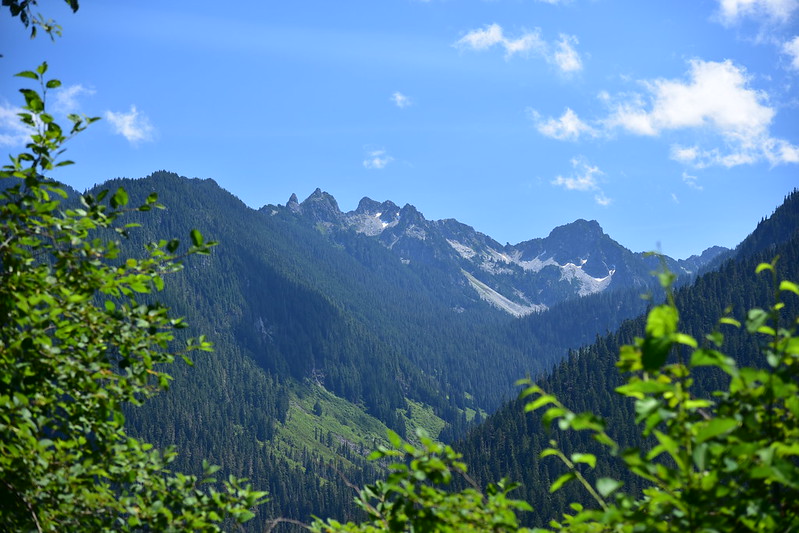 This tunnel was filled with debris from a rockslide above: 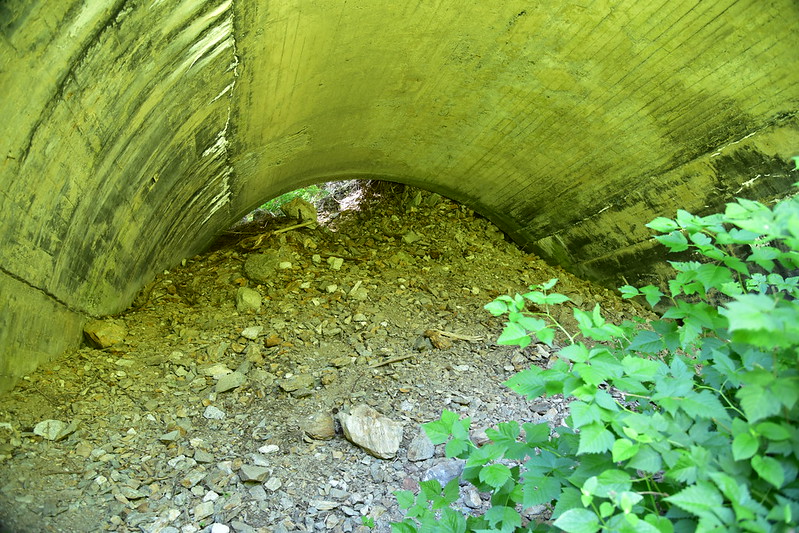 Passing another snowshed wall with views beyond: 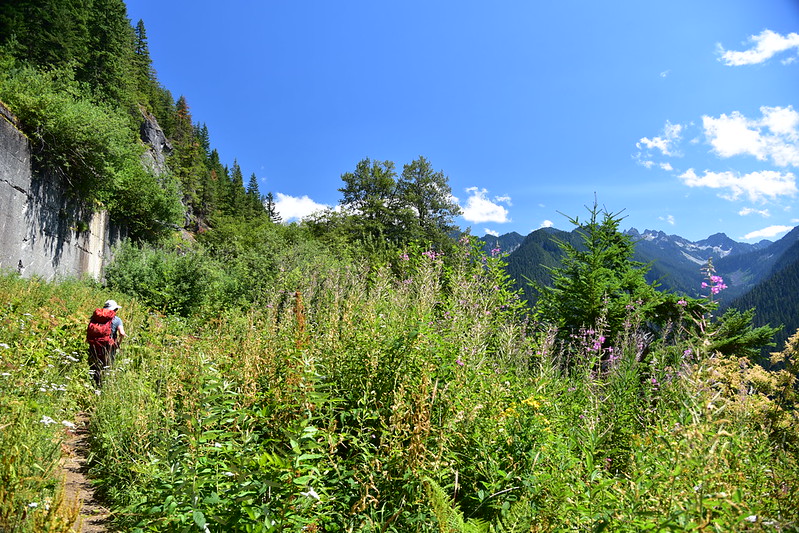 This rock arch was strange. There was no sign here telling us what it was. 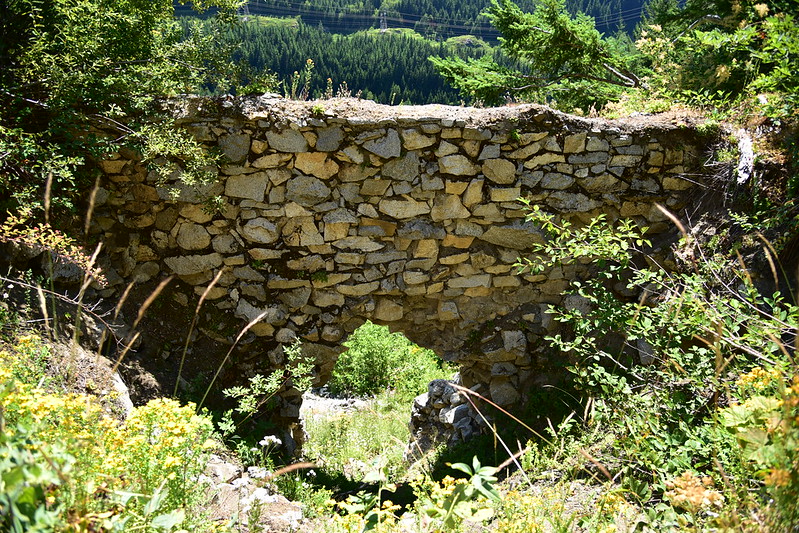 Between 1892 and 1913 trains had to slow to a crawl as they rounded Windy Point. But when the Windy Point Tunnel was finished in 1913 the trains could travel faster. The quarter-mile-long tunnel reduced the curvature, shortened the distance, and protected trains from avalanches. 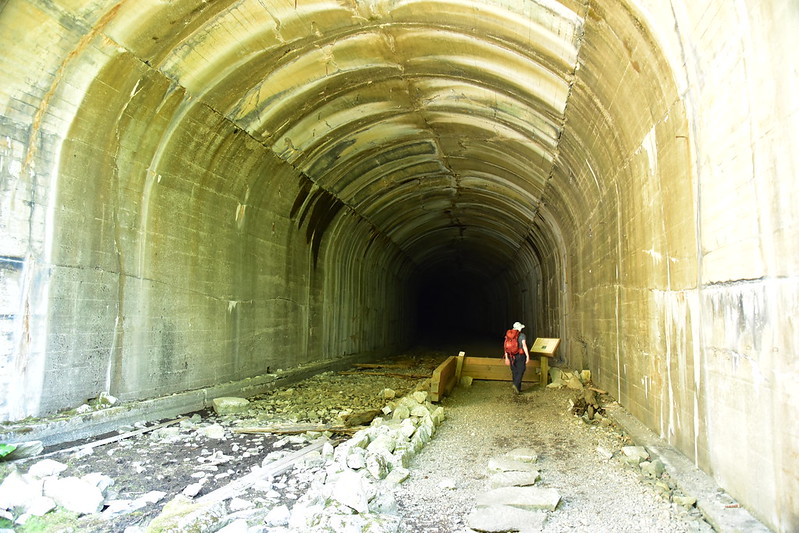 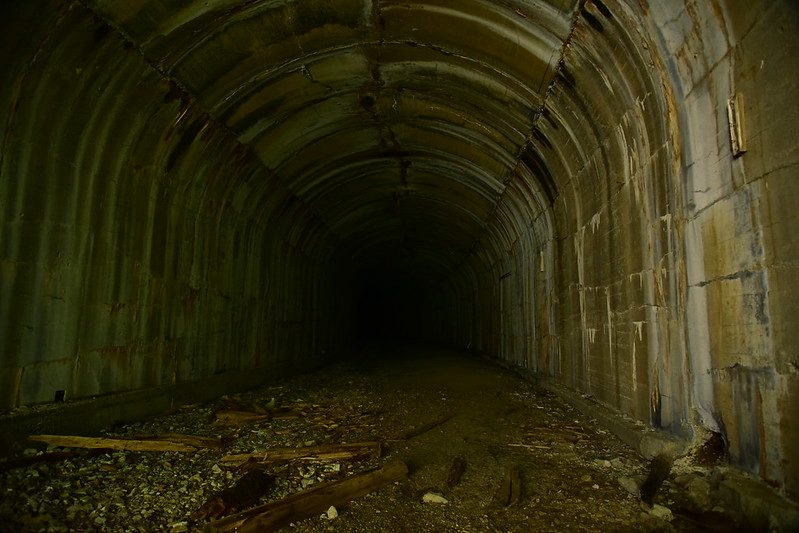 Before we took the connector trail back down to the lower trail we took a side trip and went out to Windy Point where we could look down on Highway 2 and the current railroad tracks as they entered the 7.8-mile-long Cascade Tunnel. According to the sign, “it was completed in 1929 by thousands of laborers working around the clock for three years.” 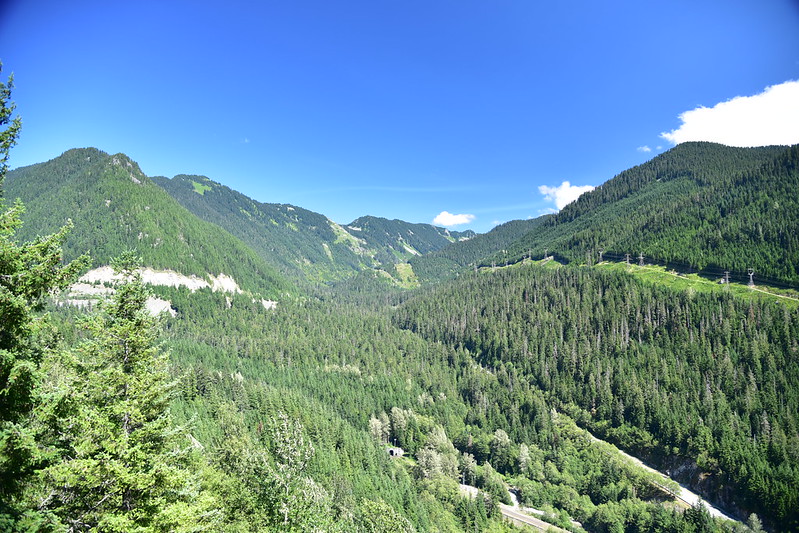 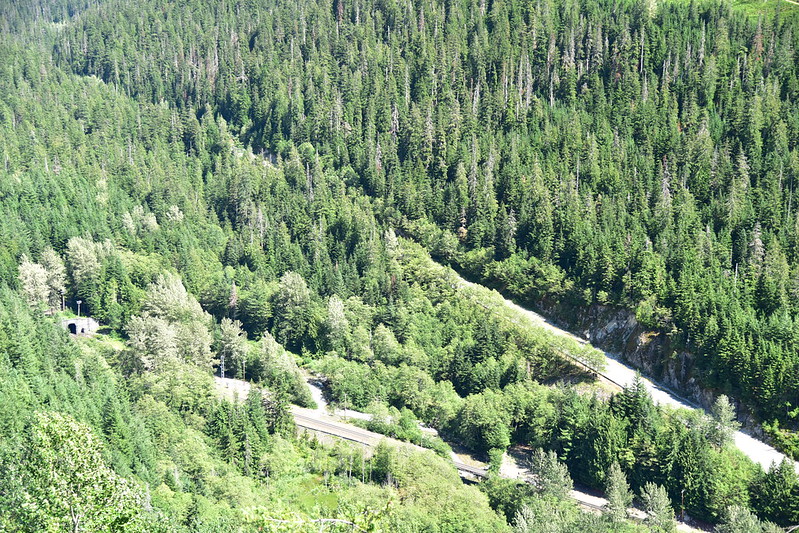 An iPhone Pano of the scene below:

For some reason there was a composting toilet at the viewpoint: 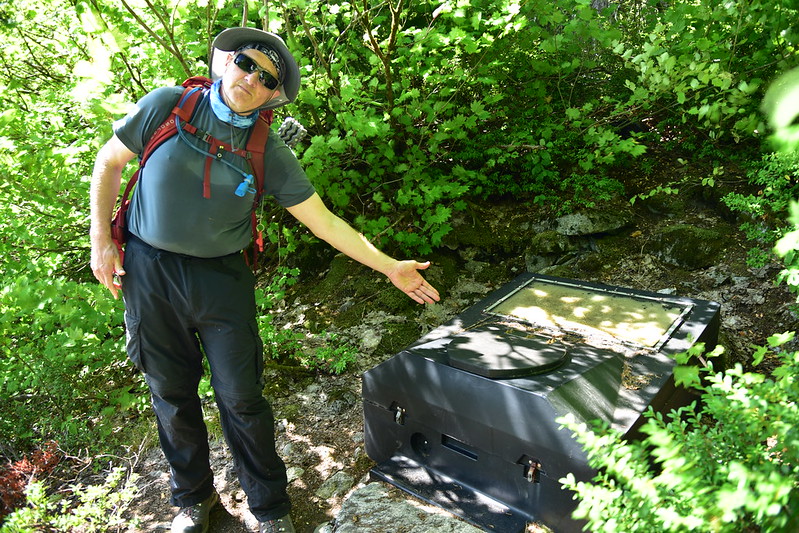 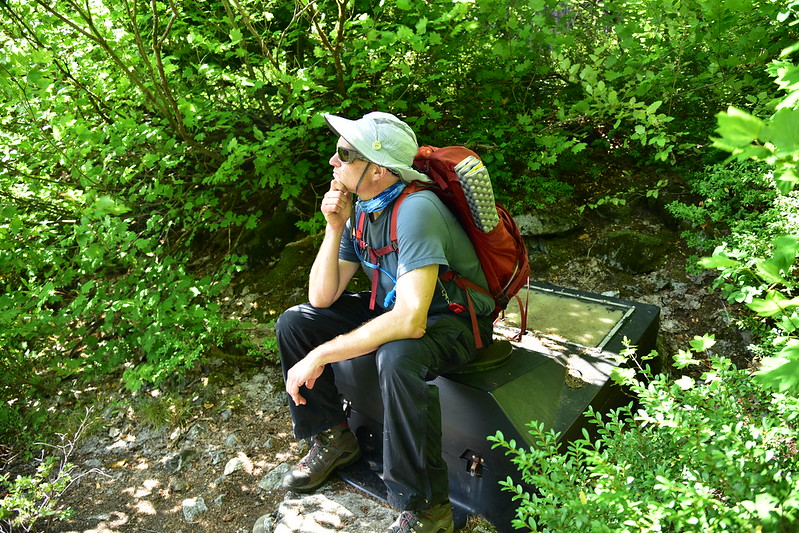 Then we took the long steep Windy Point Crossover Trail back down to the lower trail and to our car. Nice little hike! Seven miles total. Once again the forecast was wrong and it ended up being a whole lot sunnier than they said it would be. We would have had views if we had done a hike up to a peak. But this historical hike was still interesting.