Several weeks ago, Deb and I marked yesterday on our calendars for a day of snowshoeing. We really haven’t gotten out much this winter, constantly thwarted by weather and illness. I wish we had been thwarted again yesterday, because it turned out to be the snowshoeing day from hell.

It was just an off day right from the beginning. When I showed up at 8:30 to get Deb, she was still in bed! She had set her alarm for 7 pm instead of 7 am. So we got a later start than we had planned. And then once we got to the Santiam Pass area, we somehow managed to drive right by the sno park, and drove about five miles past it before we realized our mistake. So after all that, we didn’t get on the trail until 1:00.

The Maxwell Sno Park is a maze of interconnected trails, forest service roads, and logging roads. So you can customize your route pretty easily. We did the Maxwell Loop, which started out on a road, then cut cross country on a trail, then we were back on a road again. But the snow sucked the entire way. The snow had no integrity. It was this soft stuff (but not powdery) that didn’t support our weight at all, even with the snowshoes. So with every step, we sank several inches (sometimes more) into the snow. But the degree of sinking wasn’t consistent, so we were constantly off-balance. And the constant sinking into the snow was jarring to the whole body, especially when the sinking happened after you’d already put your full weight down on the snowshoe.

And our snowshoes didn’t sink straight down all the time; sometimes they sank at an angle, which was a killer on our legs and ankles. My snowshoe straps kept coming undone too. I had my poles to help keep me upright (it really was quite difficult to maintain balance in that snow), but because I was relying on them so heavily, my hands and wrists hurt (my hands still hurt today, where I was gripping the poles). The person in front had to break trail, so that was really difficult. We kept trading off, and as time passed, the intervals between switching grew shorter and shorter. Deb’s hip flexer was really bothering her. Heck, even MY hip flexer was bothering me! We moved SO slowly. It was agony. 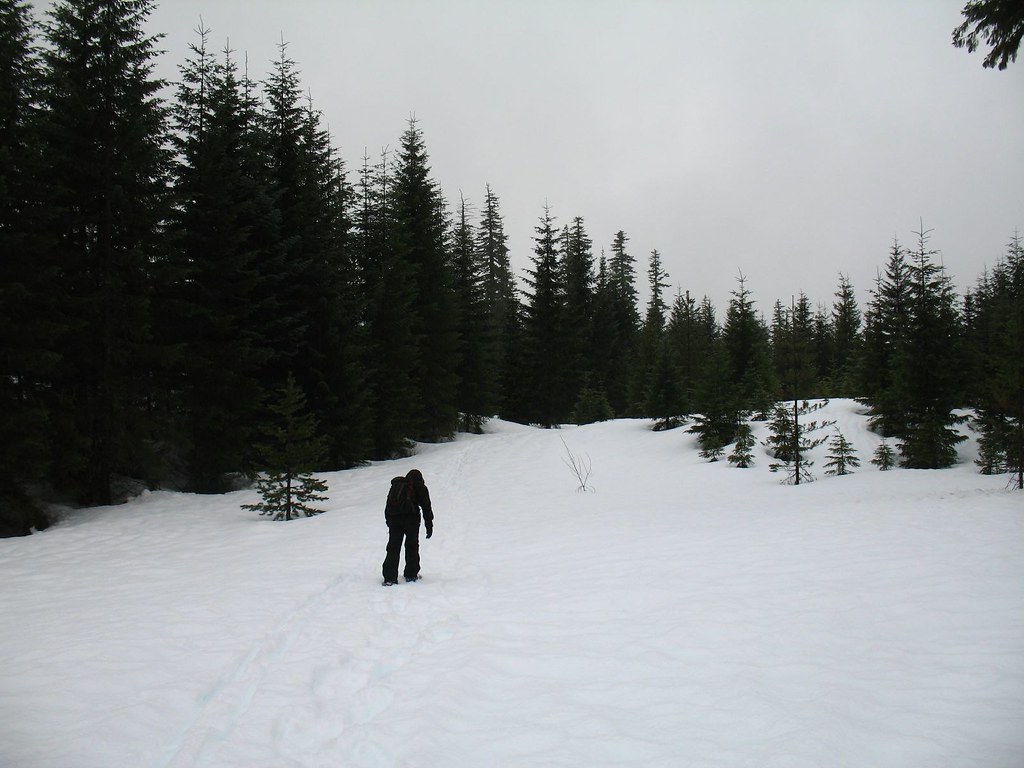 The last mile of the trail back to the sno park paralleled the highway, so we decided to abandon the trail there and go along the highway instead. But it turned out that because of all the snow piled up alongside the shoulder, there was very little room between the snowbank and the rushing cars and trucks. Too dangerous. So we walked on top of the snowbank, which was full of dirty sand that has been piling up there from snowplows all winter. As far as ease of walking, the snow we were on was only slightly better than what we’d been on back on the trail. It still took us an hour to go that last mile along the highway, with cars and semis blasting by us on the wet highway the whole time. In the end, it took us almost 4.5 hours to do 4.8 miles.

It really sucked that for all that effort we didn’t get any views or scenery. We went through several clear-cuts where we probably would have had views, but we were socked in with clouds. 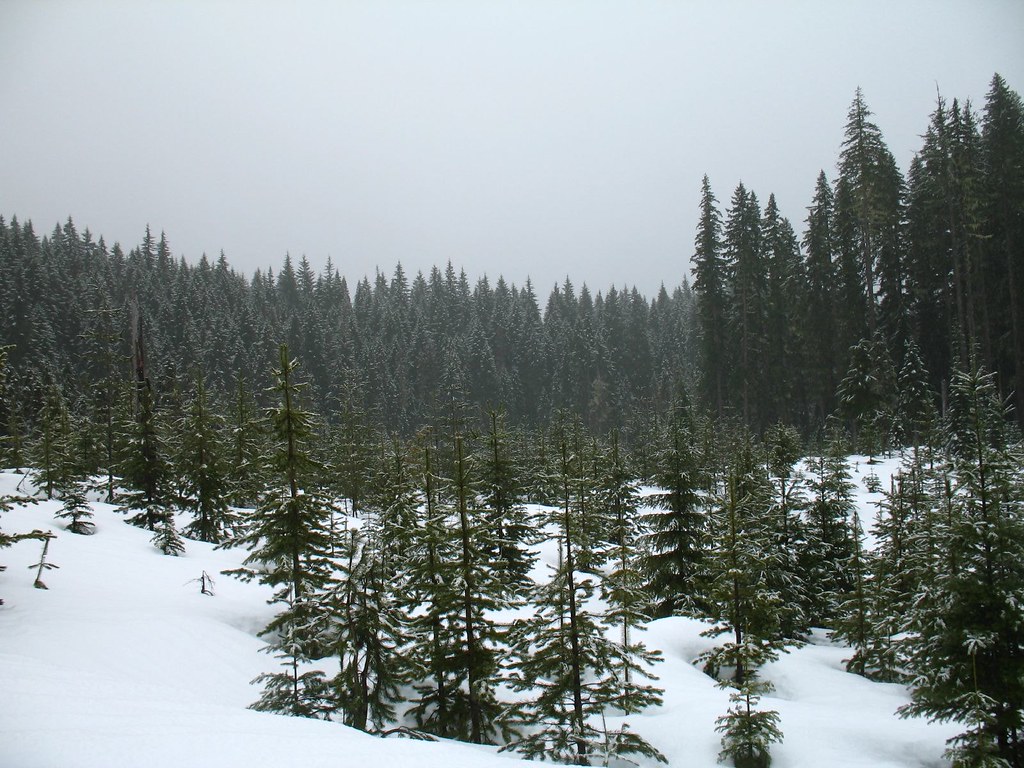 It snowed for a bit before we got started, and then snowed for about the first 15 minutes we were walking. So the trees had a little snow on them for a short while, but the rain soon washed it away. It rained/drizzled pretty much the whole time we were out there, which made the trek even more miserable. We were completely soaked, and everything in my pack got wet. Needless to say, by the time we got back to the parking lot, the car was a sight for sore eyes!

I am REALLY ready for summer hiking! Even the hottest uphill buggy trail days aren’t as bad as the brutal slog through that snow was yesterday! I hurt everywhere today.