When we woke up this morning it was COLD! The car said it was 39 degrees. We drove down to Lake Louise to do the Plain of Six Glaciers hike. On our way we hit a wildlife traffic jam and discovered it was due to a mother black bear and her cub. They were dining on the roadside vegetation. How cool to see a bear cub! 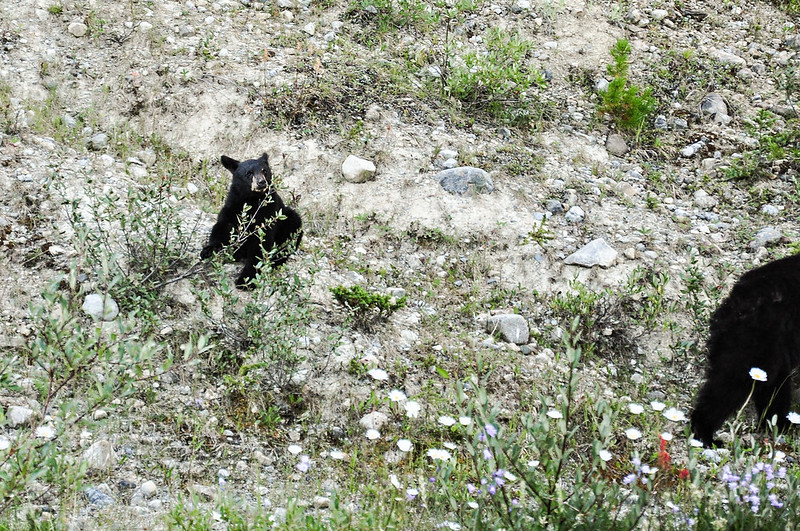 Greg has a nice long zoom lens and got some good shots of the cub: 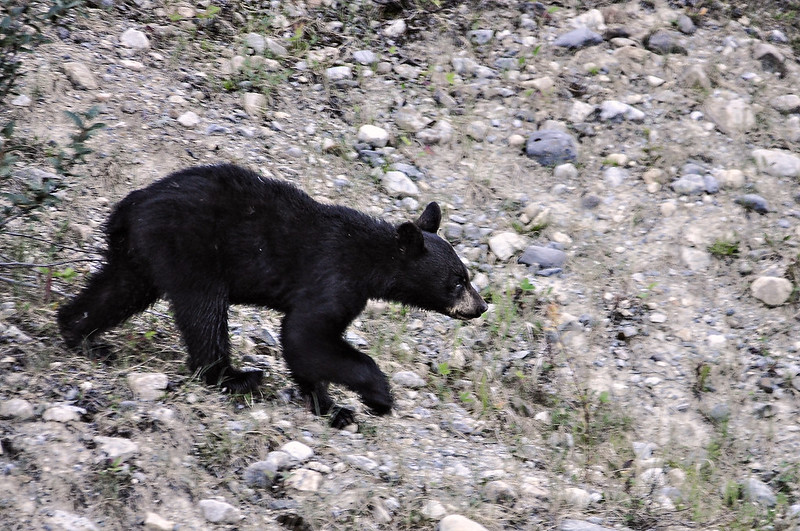 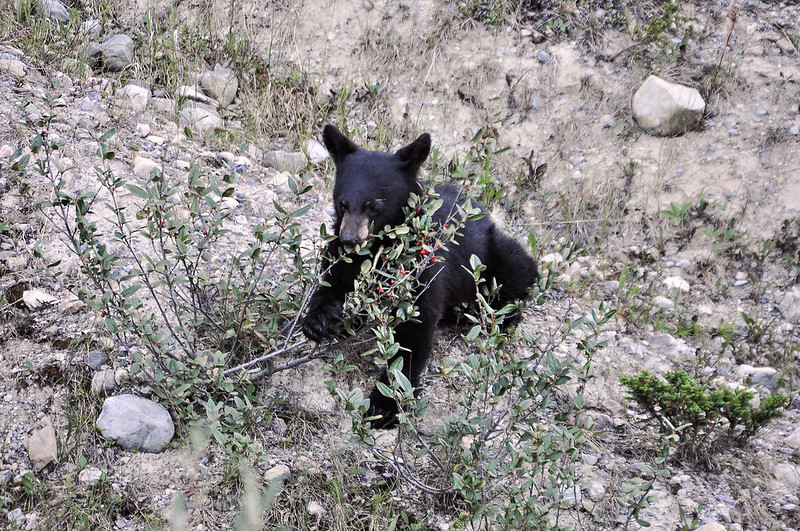 Because it was a clear calm morning (shocking!) we stopped in at Herbert Lake, which was doing some nice reflecting: 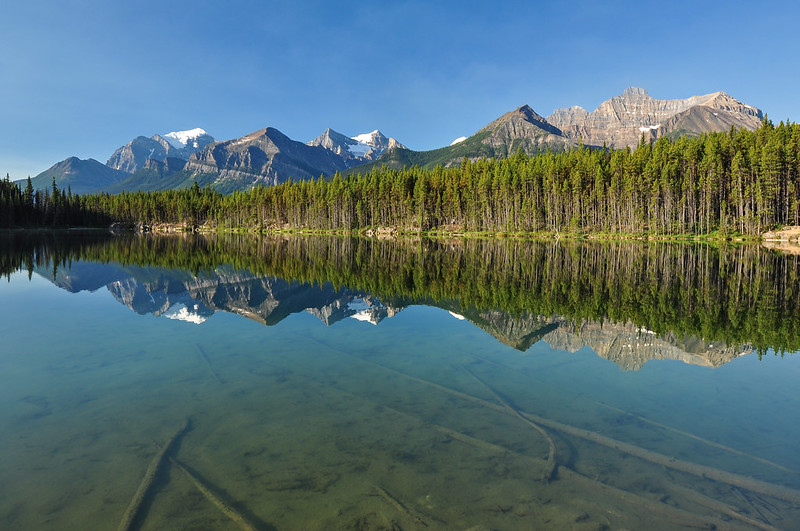 Even though we arrived at Lake Louise just before 9am, we got one of the last spots in the enormous parking lot. Glad we didn’t dawdle any longer looking at the bears! Of course the lakeshore was crowded with hoards of people and their selfie sticks. I took a quick shot of the lake before we continued on. 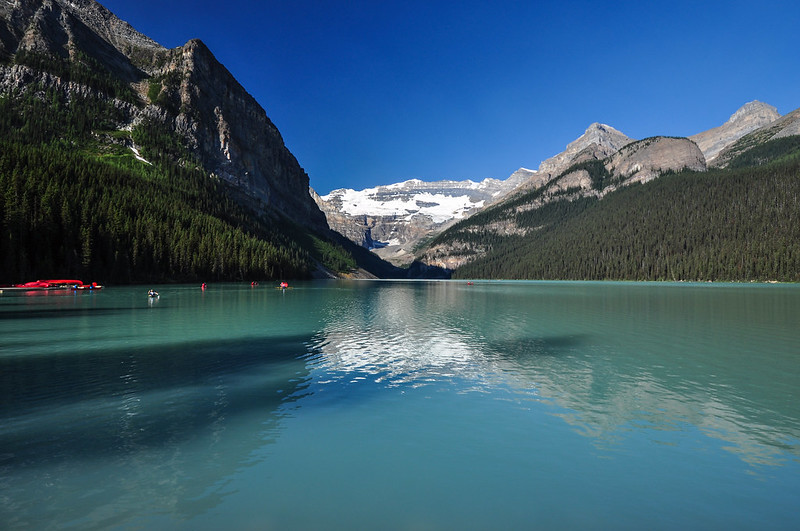 We were doing the Plain of Six Glaciers Hike, which started off by following the lake all the way to the other end: 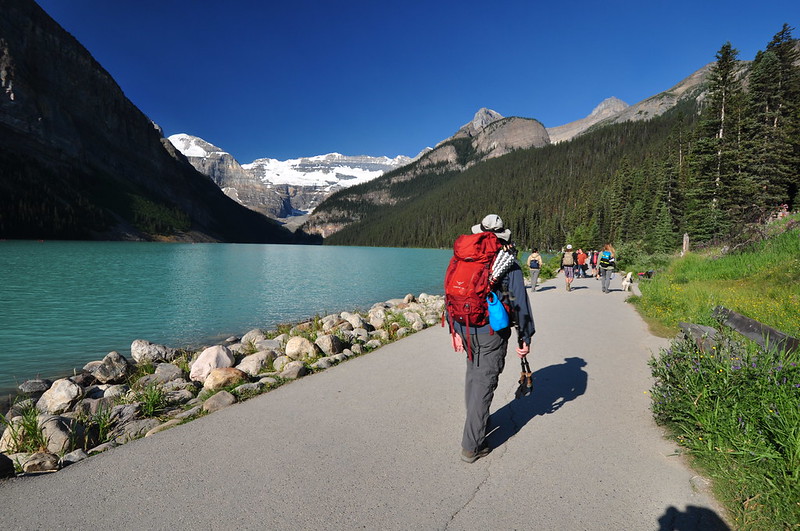 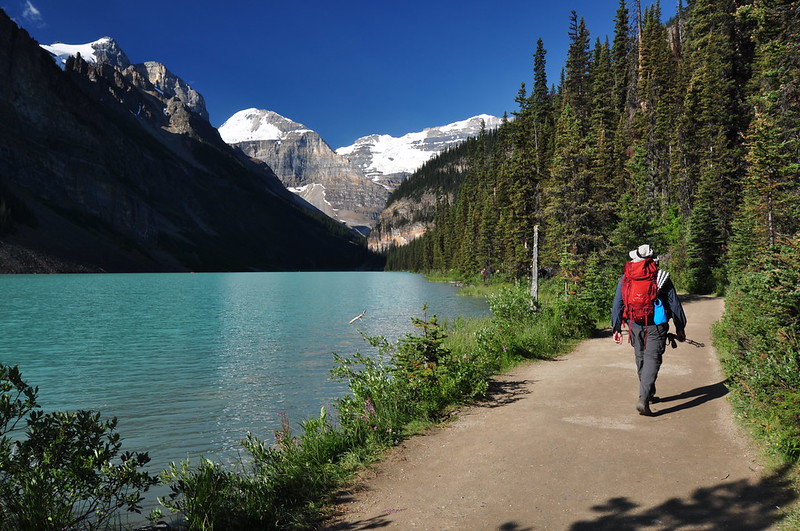 Crossing a boardwalk at the inlet: 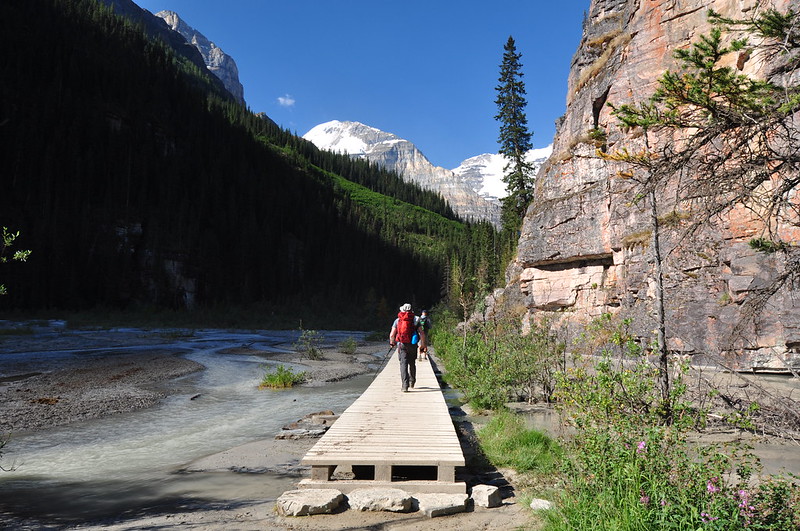 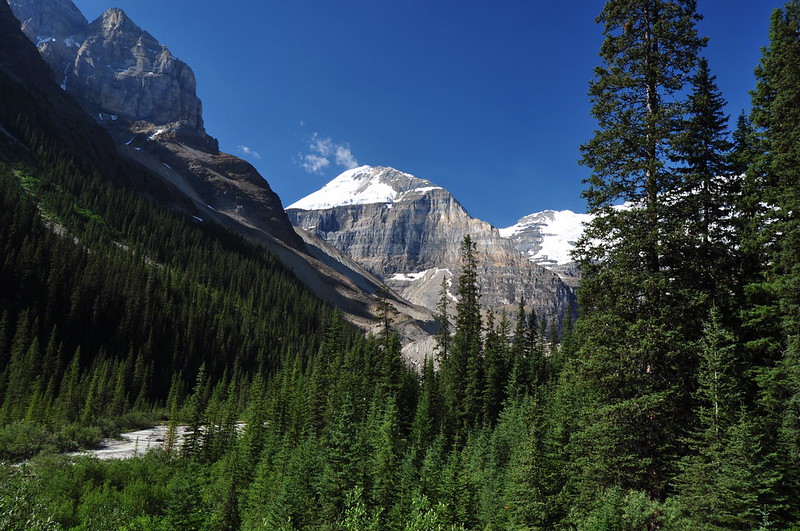 The trail starts rising. The trees here are small and provide no shade. It was hot: 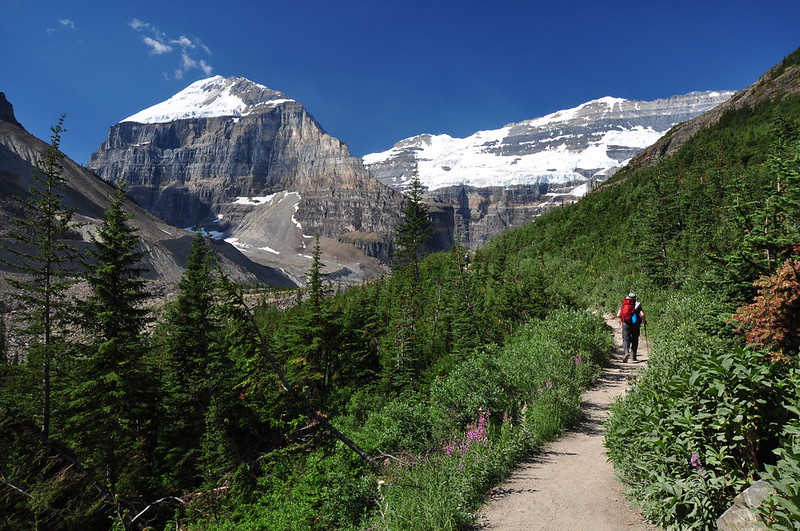 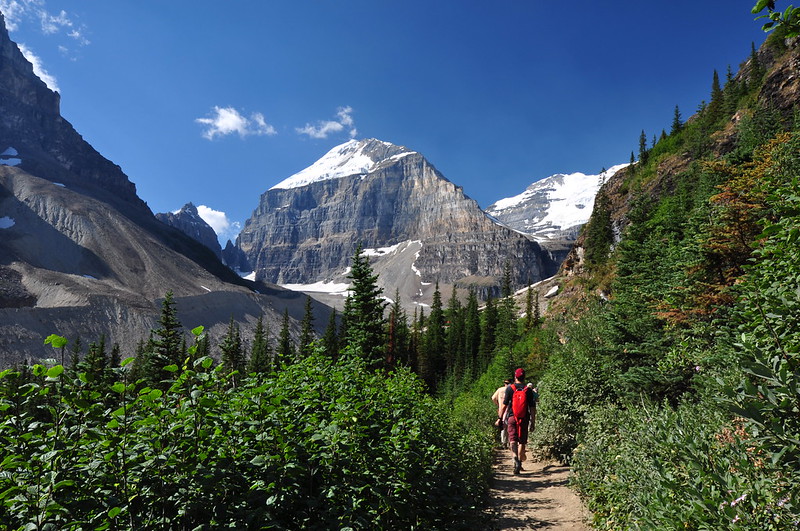 We got high enough that we could look back and see Lake Louise. But what’s this? The smoke had found us! We could see it hovering over the Bow Valley below. Crap. 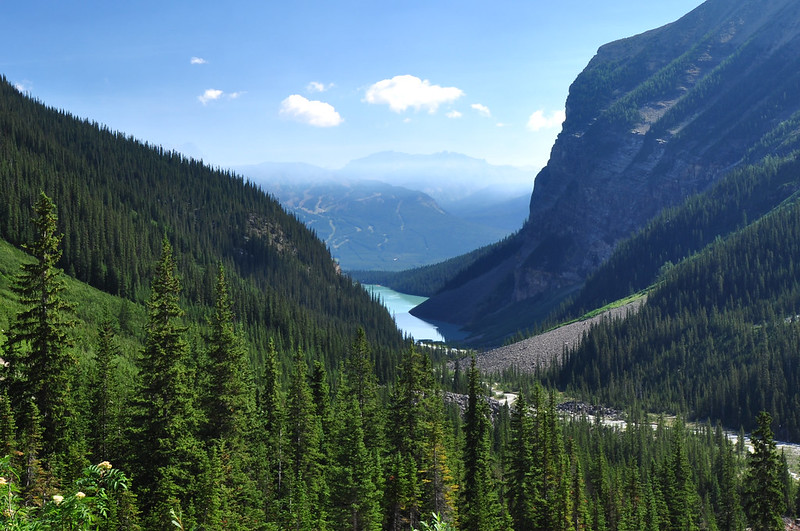 On we hiked, now above the treeline: 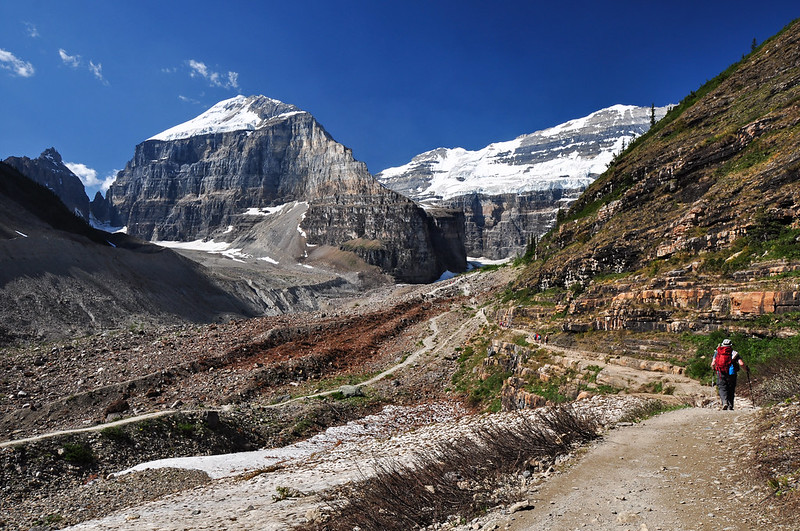 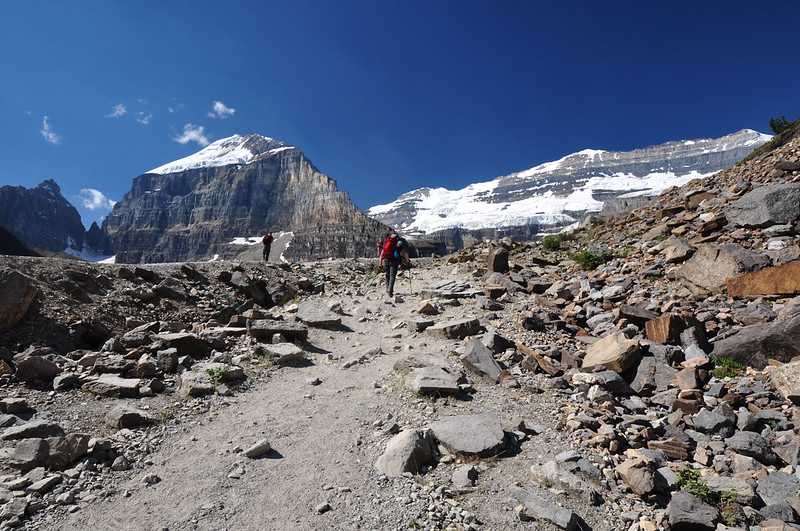 Looking back at Lake Louise: 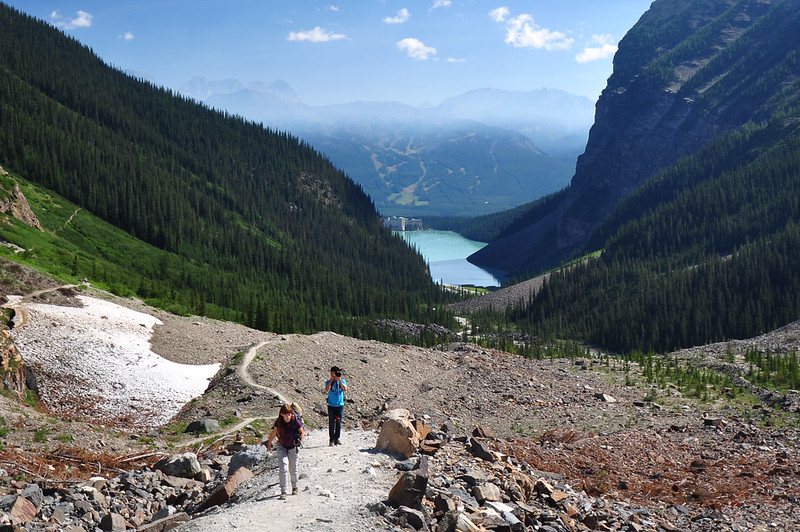 3.5 miles later we reached the teahouse. The Plain of Six Glaciers Teahouse was built by the Canadian Pacific Railway in 1924 as a rest stop for guests on their way to the Abbot Pass Hut (which we would soon get a view of). It’s in great shape considering it’s 93 years old! It was 11:30 and the place was hopping, but we managed to snag a table, a minor miracle: 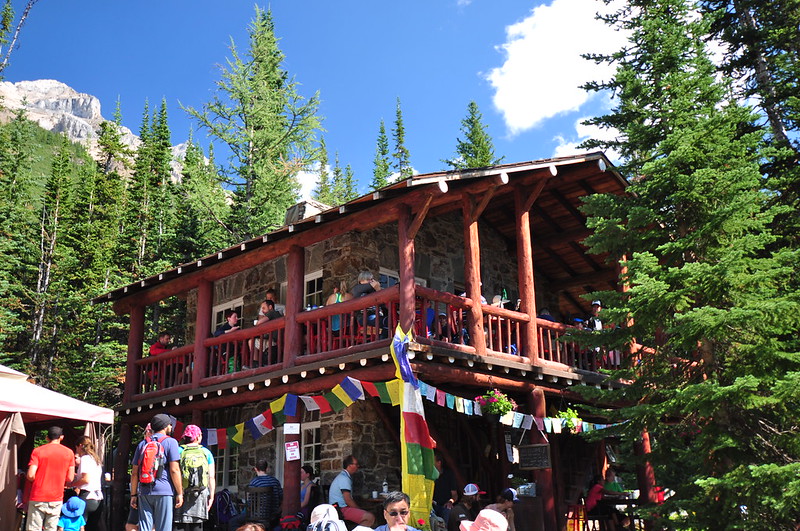 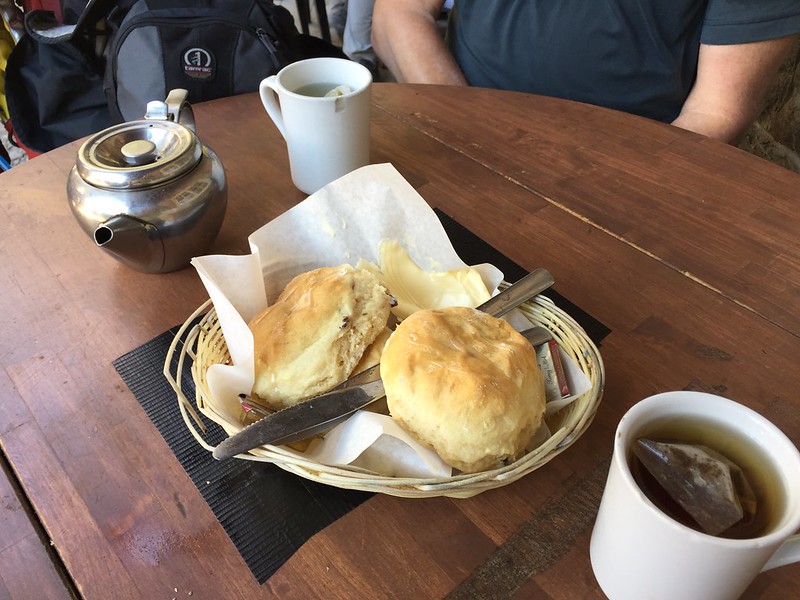 And our lunchtime “companion”, a Clark’s Nutcracker looking for crumbs: 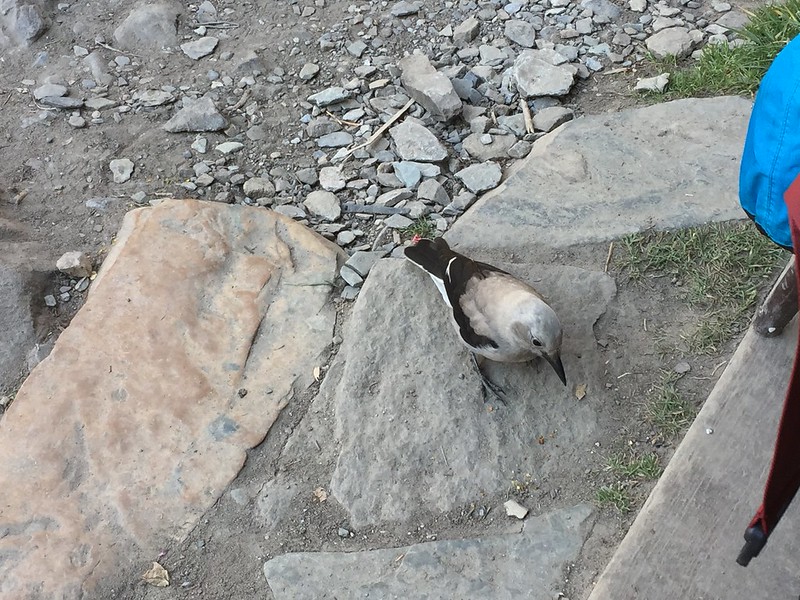 This teahouse doesn’t have a lovely lake like the Lake Agnes teahouse, but it does have this pretty stream nearby: 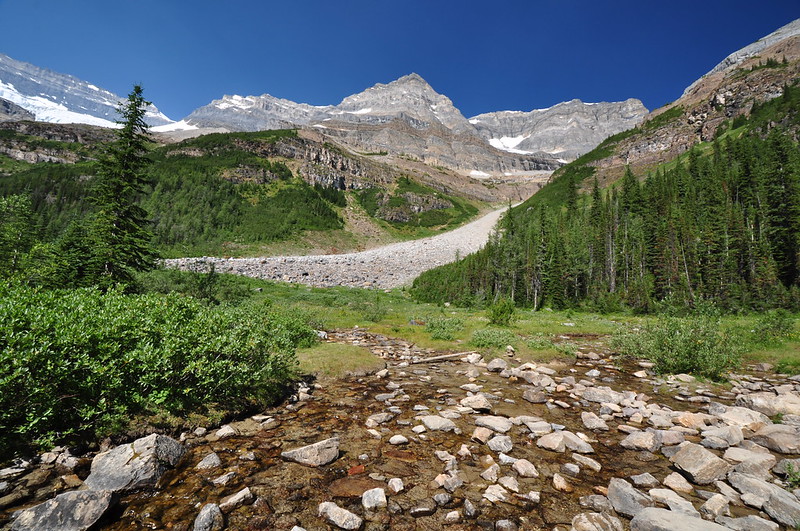 We continued on another mile to the viewpoint at trail’s end where got a view of the Abbot Pass hut way up in that gap: 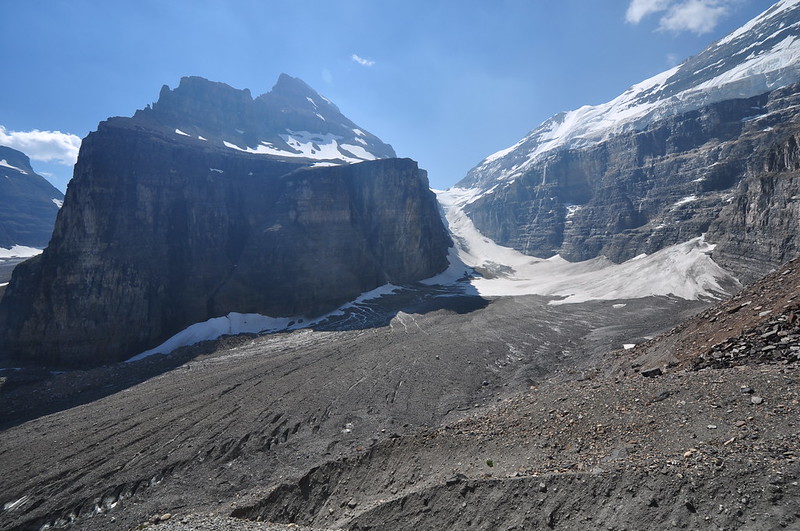 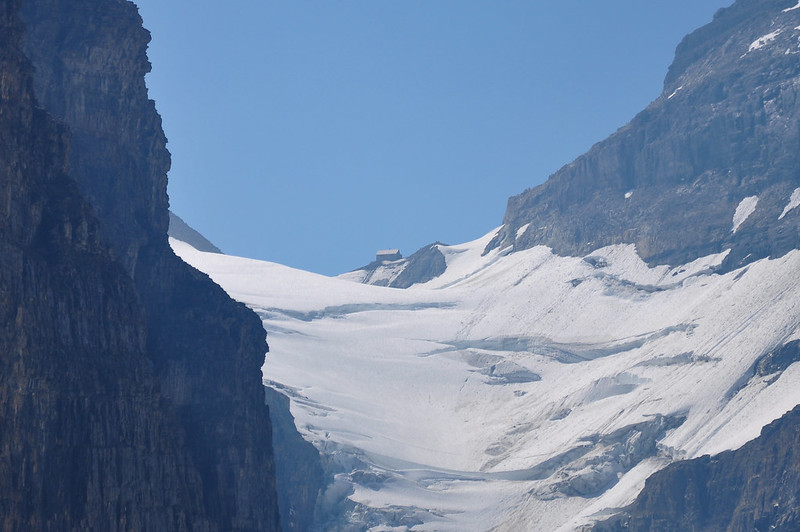 According to their website the hut “was built in 1922 with the stones from the pass and has served as a base for mountaineers and as a destination for strong hikers since then. Sitting at 2,926 metres elevation, it is second only to the Neil Colgan Hut on the list of highest permanent structures in Canada. The hut is on the Continental Divide so the provincial and National Park borders run right down the middle of the hut. Make dinner in Alberta, eat it in BC.”

We could now smell smoke and we could see that the smoke below was spreading out and working its way up from Lake Louise: 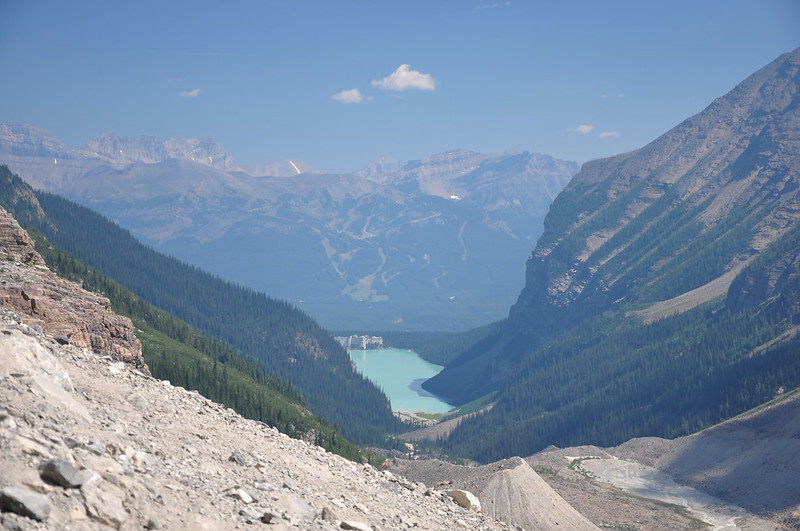 We sat and enjoyed our high vantage point for awhile: 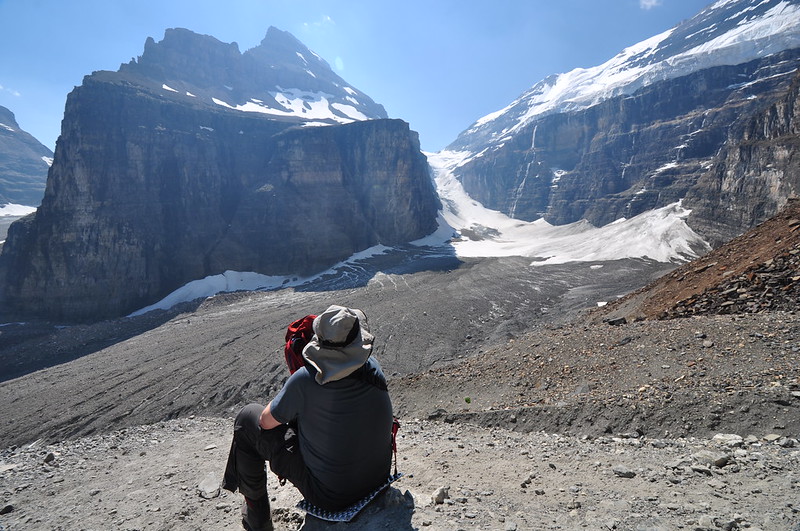 The view hiking back down: 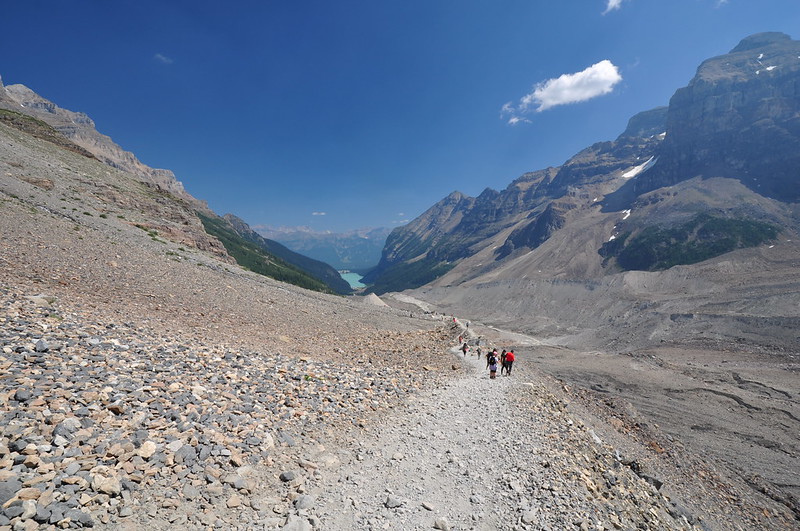 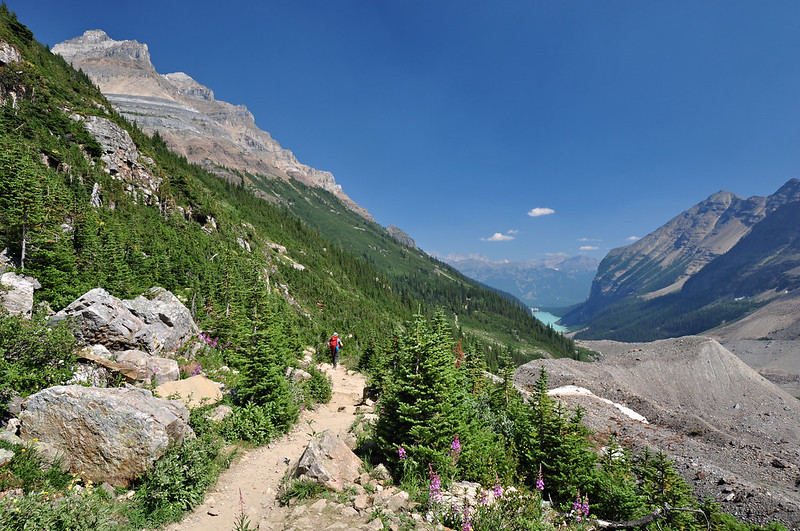 We passed many many people hiking up as we hiked down. At least half of them (if not more) looked unprepared for the hike. Due to the hot sun, the lack of shade, and the high elevation, this is not an easy hike.

When we got back down to Lake Louise we saw quite a few people were treating the far end of the lake like a beach, which was interesting: 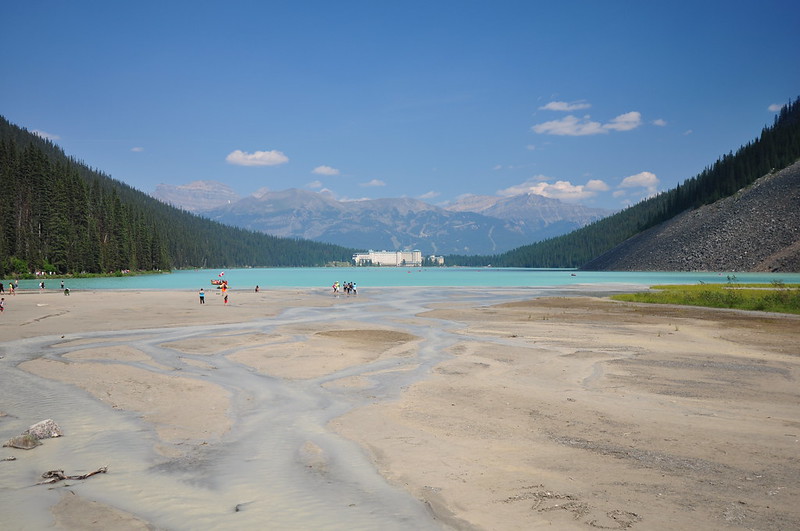 We could see the crowds near the chateau as we approached: 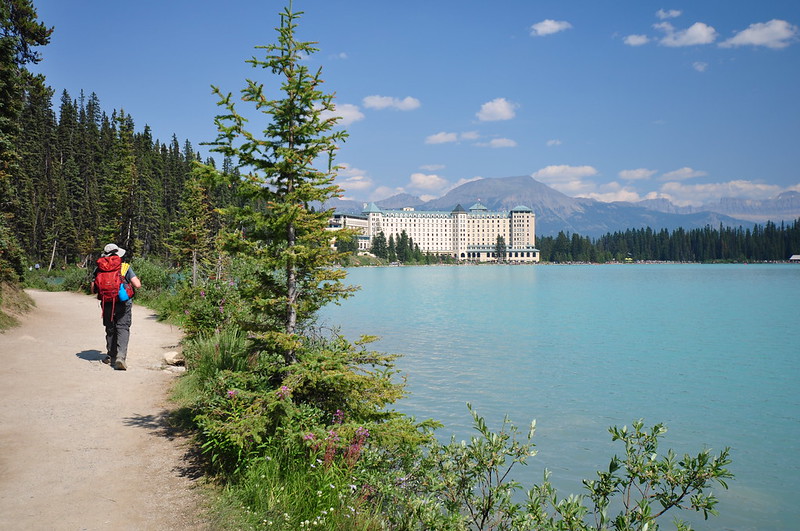 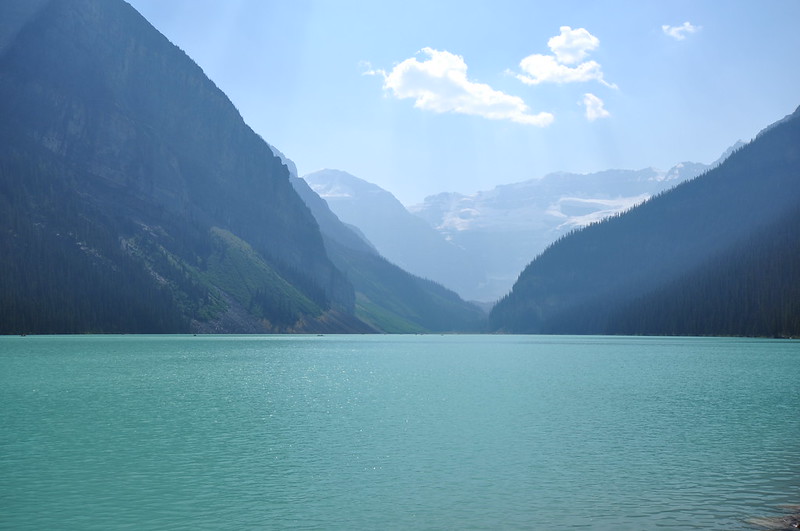 Our campground didn’t have showers so we paid to use the showers at the Lake Louise Campground before we left the area. Money well spent! The guy at the front entrance told us the shower building had just been rebuilt or renovated so I was very surprised that there were no benches in the shower stalls. What a dumb idea! Where are you supposed to put your stuff! I’ve showered at MANY a campground over the years and this is the first time I’ve encountered a no-bench situation. It was quite a balancing act to keep my dirty clothes, clean clothes, towel, and shower supplies off the dirty floor when all I had was one hook and the top of the door.

On the way back to the campground we saw the same two bears along the same stretch of road. Cool! 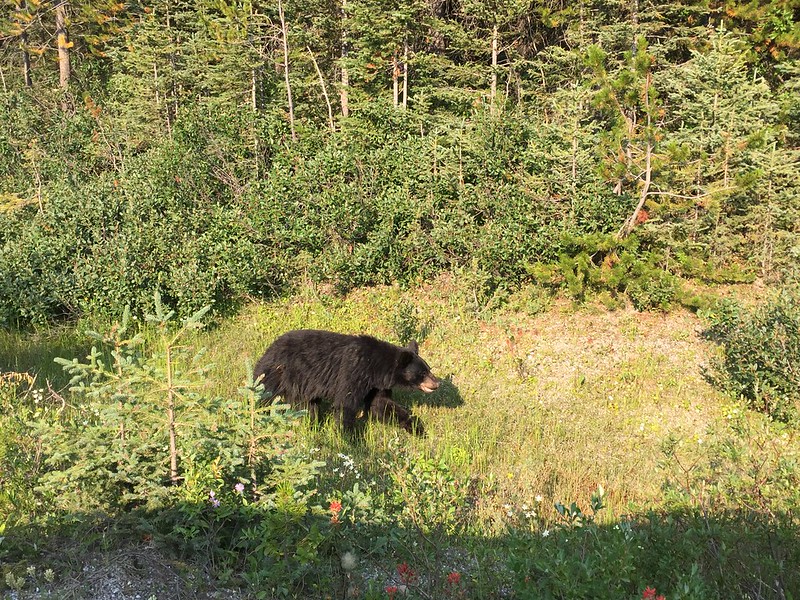 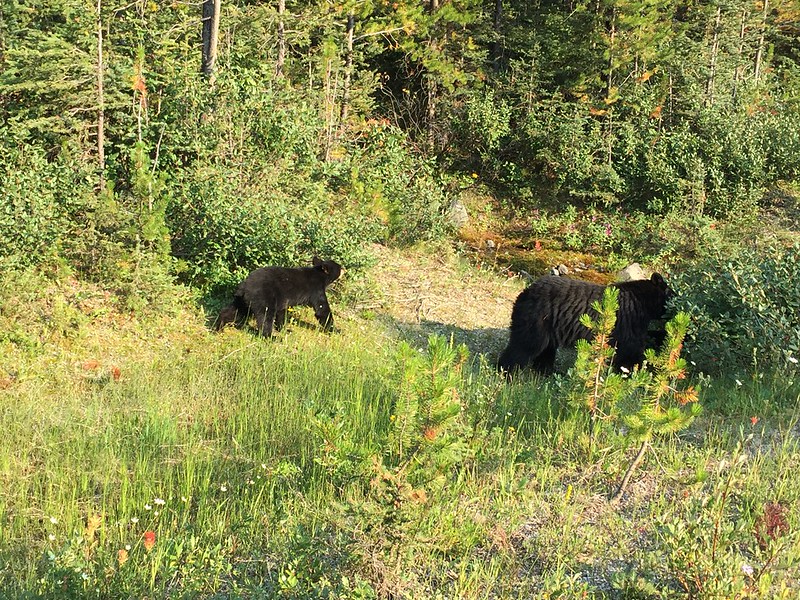