My sister and I went along on one of the Bull Run Watershed tours offered through the Portland Water Bureau. It was really interesting and beautiful. We learned all about the watershed and how it works and got to see an area of the Mt. Hood National Forest that few people get to see. We entered the watershed at the upper end, from Lolo Pass Road, working our day down Road 10 all the way to the other end below the two reservoirs.

Our first stop was Bull Run Lake, which is almost directly south of Lost Lake and has a similarly astounding view. If this lake was open to the public, I’m sure it would be as popular as nearby Lost Lake. 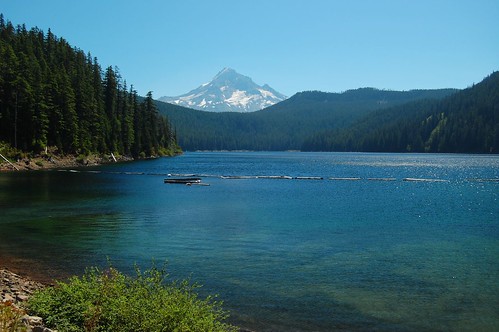 Further down, we stopped at Reservoir 1, one of two reservoirs from which Portland’s drinking water is extracted. 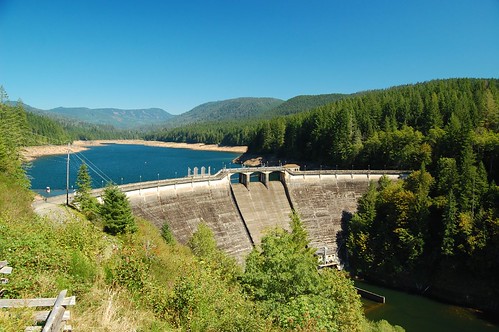 We also got to walk down several hundred stairs along the downstream side of the dam. Fortunately we didn’t have to climb back up; our tour bus met us at the bottom. 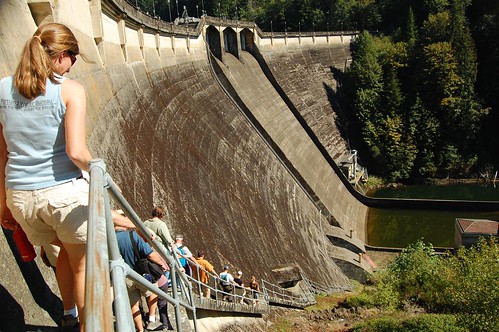 Speaking of the tour bus, the Water Bureau has a pretty snazzy rig for taking people around the watershed. Comfy seats, AC, and a toilet. And it has recently been decorated with the artwork of a Portland elementary school student. 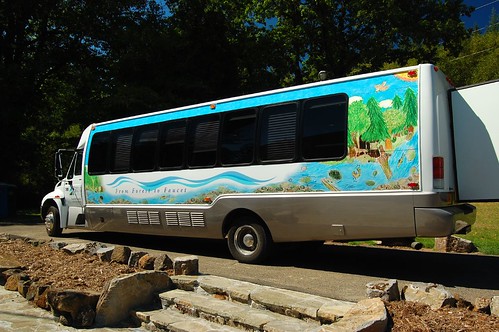 See the rest of my pictures here.

If you’ve never been on one of these tours, I highly recommend it. It’s a pretty long day (we left Portland at 8:30 am and returned at 5 pm), but it’s interesting information and if you’re curious what this closed-to-the-public area is like, this is your chance to see it. Well, part of it anyways. I just know there are hidden – maybe undiscovered – waterfalls tucked away in those hills. We actually saw one waterfall from the road, along Falls Creek, I think. But as long as the area remains a protected watershed, they shall have to remain hidden away.

On Sunday, my sister and I did a short one-nighter in the Bull of the Woods Wilderness. It was my first time there. I’ve never done any hiking in that particular wilderness, although I have been to the Opal Creek Wilderness next door. We hiked the Dickey Creek trail to Big Slide Lake, which is 5.5 miles in. (Some pictures below, but the whole set is here.)

At the beginning of the hike, the trail descends steeply for 500 feet. It would have been better if they’d built switchbacks, but instead the trail just plunges straight down the hill. Since the trail was covered with loose dirt and pebbles, I was afraid I’d slip and fall, even though I had my hiking poles, but I managed to stay upright.

After that, the trail passes through some lovely old growth. The forest is quite pleasant to walk through, and even though it’s too late for wildflowers and too early for fall color, we DID have our pick of yummy huckleberries. They were EVERYWHERE. Mostly the red ones, but some of the blue ones too. We picked as we hiked, sometimes stopping altogether for a particularly full bush. 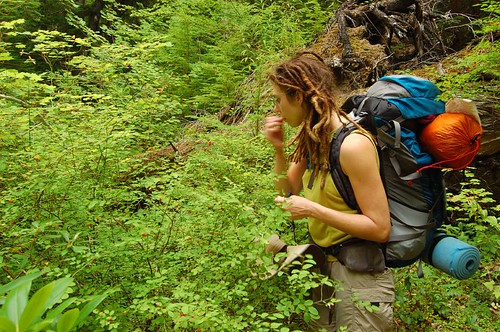 After 2.9 pleasant miles, the trail crosses Dickey Creek, which is a charming body of water. There is a little campsite here, and it would be a fine place to camp, especially on a hot day. The creek crossing was not a problem. Not only was the water level low enough for rock-hopping (my method of choice), but there is also a big log that traverses two-thirds of the water. The view below is from the log crossing. 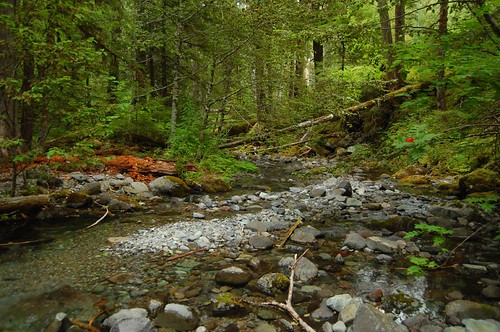 It is another 2.6 miles and 1,300 feet from the creek crossing to the lake. The trail climbs up and up and up, well-graded in most parts, but still going relentlessly up. The huckleberries kept us going. Finally we reached the first of two rock slides below Big Slide Mountain. The first one is obviously older, with quite a lot of trees and vegetation growing in it. A short while later is the second (newer) rock slide which is huge. It’s bigger than this picture conveys. 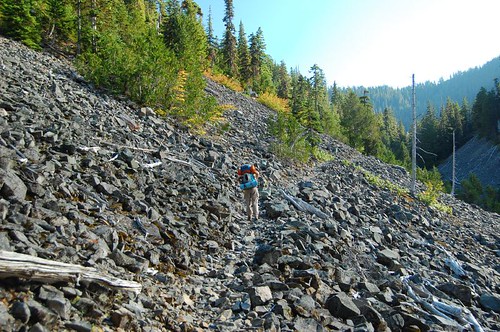 It was here that we saw the first fall color on this hike. There was a lot of vine maple growing in the rock slides, and those are always the first to turn. A note here: this whole trail will be spectacular in a few weeks. There is an unusually high amount of vine maple along the whole route. Except for at the rock slides, it’s still green at this point. I kept thinking as we walked by it all, “this will be so beautiful soon!” 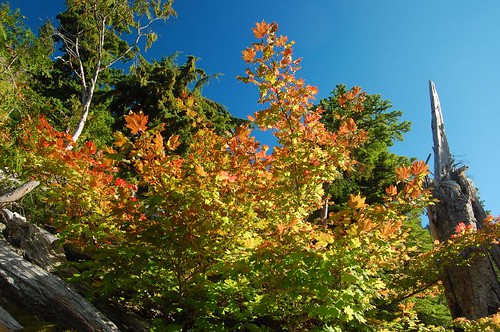 Shortly after leaving the second rock slide, there is an unmarked side trail plunging steeply down the hill on the right. This trail leads to the campsites on the west side of Big Slide Lake. Being a Sunday night, we had the place to ourselves, so we staked the tent and set about making dinner. The campsites here are pleasant. We took the one nearest the lake, but there were several others scattered in the trees on the slope above the lake. There are also at least two nicely-constructed fire rings. 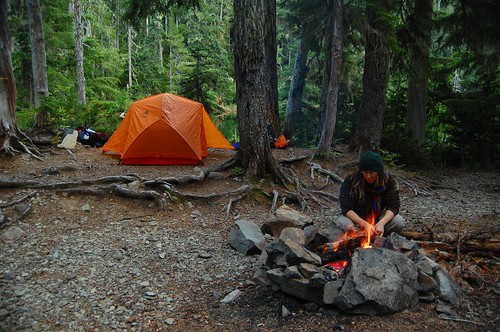 It got down to about 35 that night, but we still managed to stay pretty warm in our tent. The morning was clear and sunny, although the sun never reached the lake before we left, thanks to the high ridges surrounding the lake. You can hike up to those ridges, actually. And the trails up there connect with other trails in the wilderness. We had considered undertaking the 2.2 mile 1,300-foot climb to the fire lookout on Bull of the Woods Mountain, but we decided to hike out and go to Bagby Hot Springs instead. 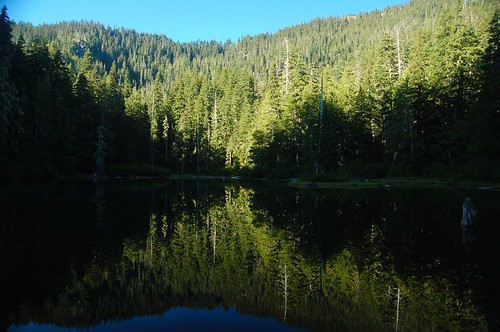 This is a really pleasant little lake for a one-nighter, and although it takes nearly two hours to get to the trailhead from Portland, the trail is short enough that it doesn’t require a whole day. I get the impression that this lake doesn’t get as many visitors as some of the other lakes in the wilderness, but according to the trail register at the trailhead, about 20 groups have hiked in here this month. Oh, I should mention that Big Slide Lake would be perfect for swimming on a warmer day. There is a cute little island that you could probably wade to, and the water in the lake is surprisingly warm. All in all, this is a nice little hike. I’d like to do it again later in the fall to see the autumn display!