On Memorial Day I had the crazy idea to take some friends hiking in the Gorge. Fortunately we got an early start because it was crowded out there! We did the loop that starts at Horsetail Falls, goes up behind Ponytail Falls and past Middle Oneonta Falls, and then up to Triple Falls. Of course everything is vivid green and there are lots of wildflowers blooming along the trail. This is a really pleasant hike, and even though there’s some elevation gain, it’s a good trail for newbie hikers since there’s plenty of scenery and the total distance comes out to about 4.5 miles.

I never cease to be impressed at walking behind a waterfall. 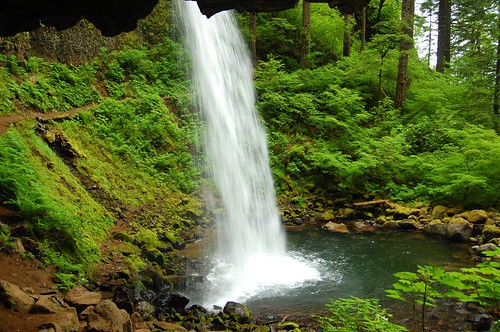 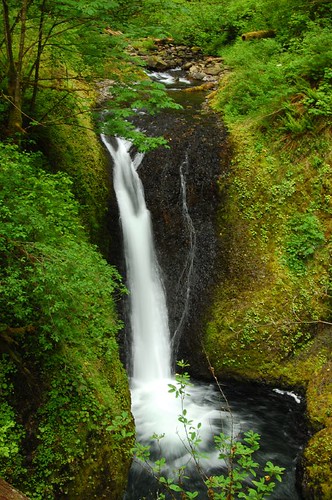 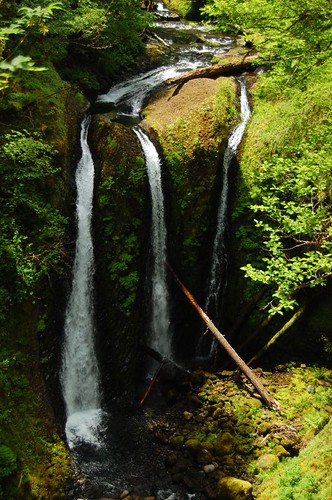 If you have the book 60 Hikes Within 60 Miles: Portland, you may have seen or even done this unique hike. If you’re a Trails.com subscriber, you can see the trail guide here.

This is an interesting “trail”. The Salmonberry River travels through the Coast Range in a deep canyon, through which a railroad track also passes (it’s actually the route of the Oregon Coast Explorer train from Tillamook). Since there are no trails or roads, the way to see the canyon is by walking the train tracks. This can be both tedious and difficult, since sometimes the earth between the railroad ties has eroded away, which means you have to step on the ties themselves, which makes for an awkward pace and a need for great concentration. But the scenery is worth it, especially this time of year when everything is really green. 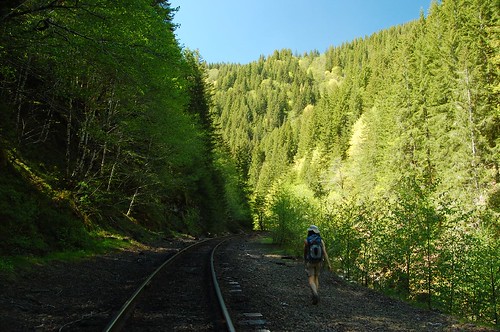 We started from the Cochran Pond, as recommended in the guide. We walked downhill for probably 4 miles before turning around and heading back. Along the way we crossed several small trestles and two big tall ones. The trestles were kind of fun, actually. We also walked through two tunnels. By the way, bring a head lamp for the tunnels! We forgot ours and just had the flashlight from the car. Fortunately because it was a bright sunny day, only the middle of the tunnel was dark. 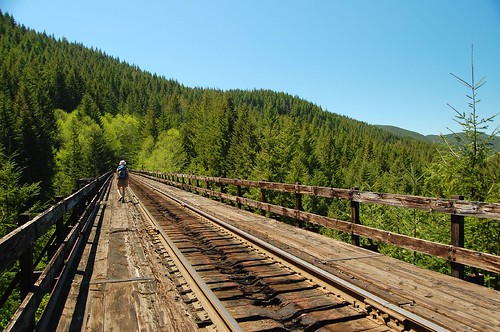 We saw two trains. One we didn’t hear until about a minute before it came around a bend. The book says the trains are required to blow their whistles all through the canyon, but this one wasn’t. Still, it was going uphill and going slow, so we had time to get out of the way. When the other train passed, we were already taking a break alongside the tracks. It also did not blow its whistle through the canyon, although it did once it saw us sitting by the tracks. We also saw three maintenance trucks with their special railroad wheels. 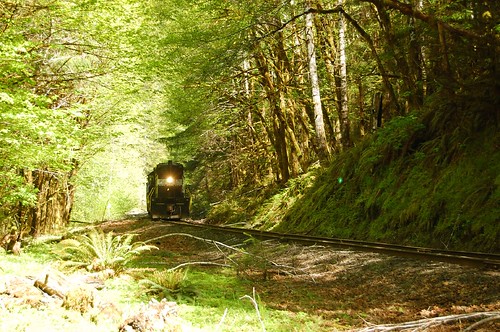 The map in the book is a little off-scale. We traveled a long distance after the second tunnel, and looking at the map we should have reached the third tunnel, but we never did. Bring a topo map. Not like you’re going to get lost out here, but it’s nice to know where you are.

This is a different kind of hike, for sure. But it’s quite scenic. The whole section is quite long, 16 miles I think. We’d like to explore further out towards the other end, where the steel bridges are and the two-house town of Enright. Maybe in the autumn.

Took lots of pictures, which you can see here on flickr.