When my sister and I visited Banff in 2005 we did the hike from Lake Louise up to the Lake Agnes Tea House. We enjoyed delicious tea with warm biscuits and honey and declared that every hike needed a tea house. I told Greg we definitely needed to do this hike while we were in Banff so today we headed up there.

Our first stop was to drive up to Moraine Lake, which is a popular stop for all tourists in Banff. Good thing we got there early because there were already a lot of people at 8:30am. But man, what a view! It took quite a bit of jockeying to get a photo that didn’t have people standing in the way. 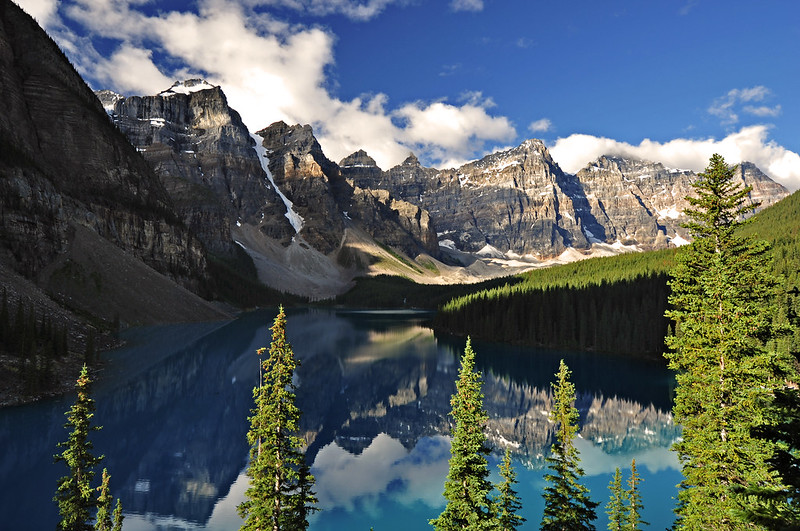 We had another pika sighting and Greg was lucky enough to get two really awesome shots: 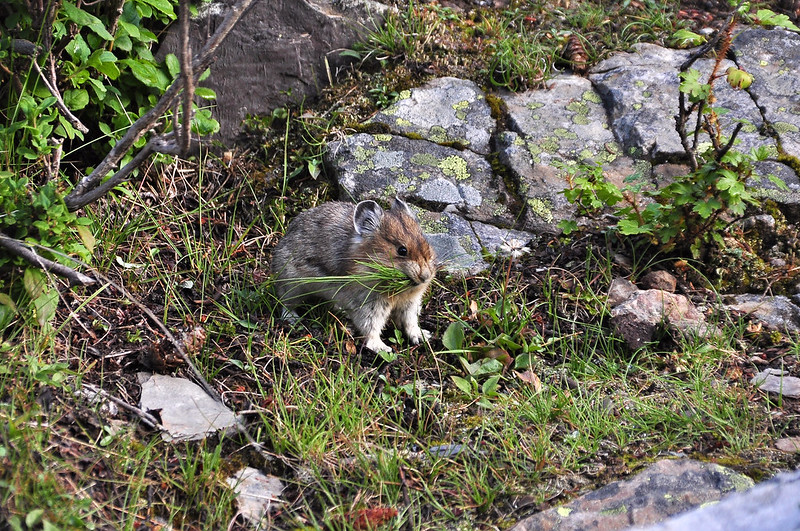 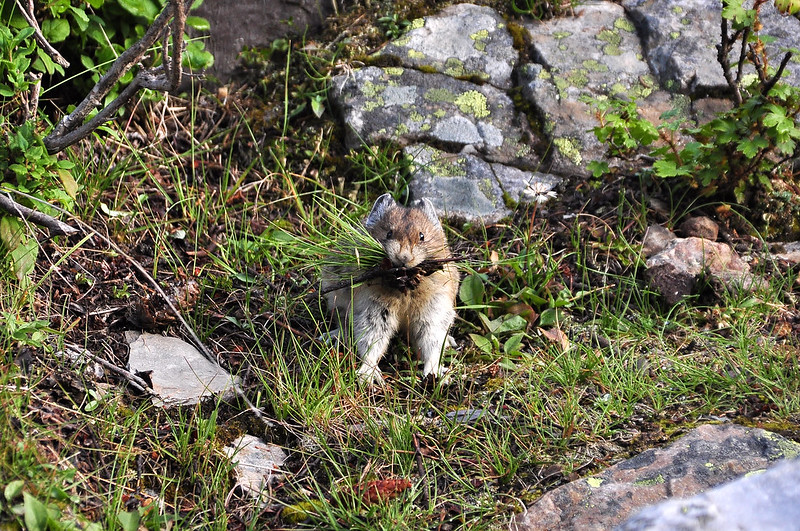 We got back in the car and drove to Lake Louise, the star attraction of Banff National Park. This place is so popular that the parking lot often fills by 10am! We were able to snag a spot, and then were dismayed to discover that the public bathrooms in the parking lot were closed. The hotel was not an option, as it was surrounded by numerous signs that basically told us to keep out. 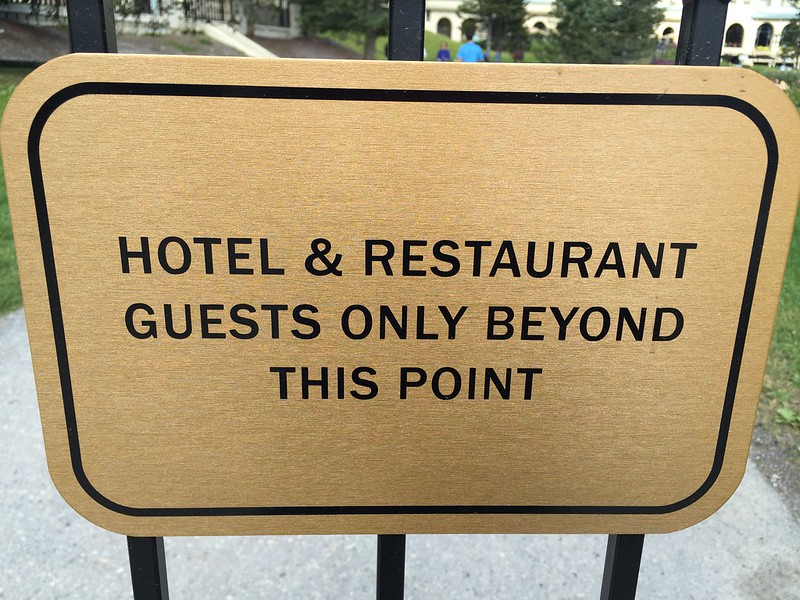 Lovely Lake Louise is such a cool color. What you can’t see in this photo are the HUNDREDS of people along the lakeshore. 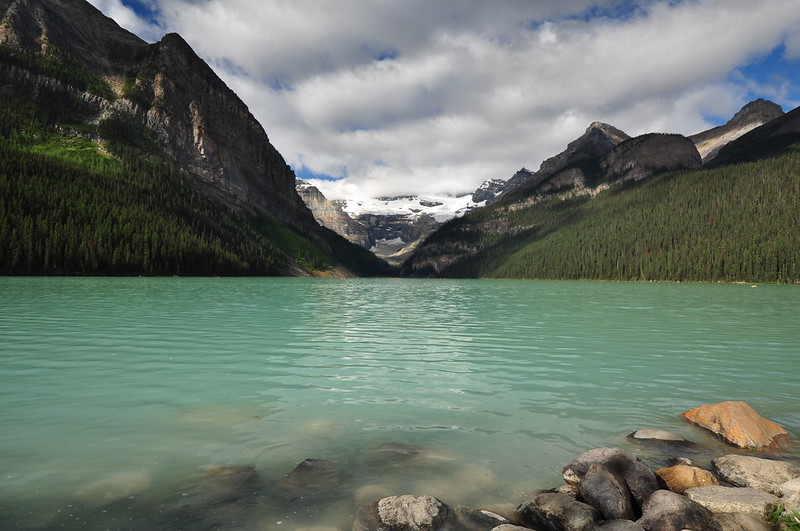 We began the climb up to Lake Agnes. We passed Mirror Lake with the Big Beehive towering high above: 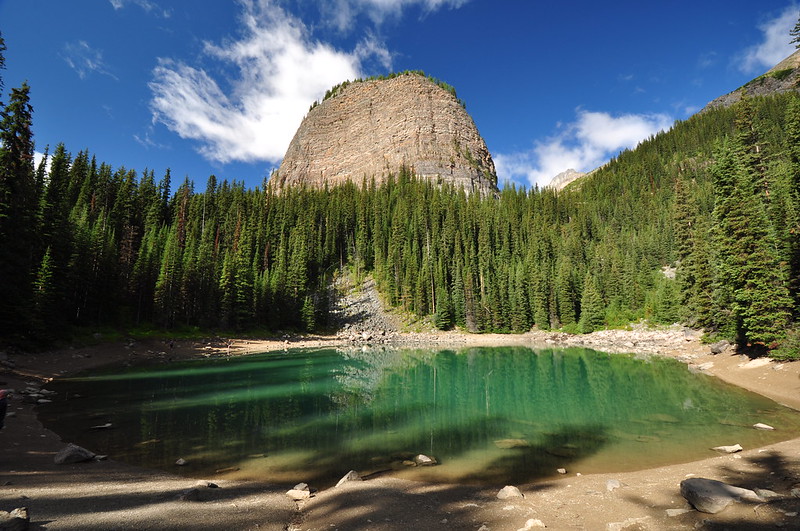 After jockeying through the crowds on the trail we finally reached the Lake Agnes Tea House: 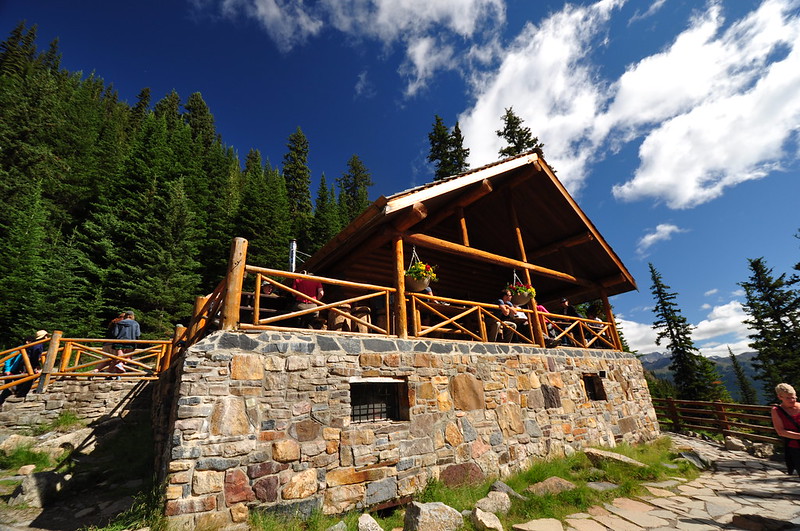 What an impressive menu! 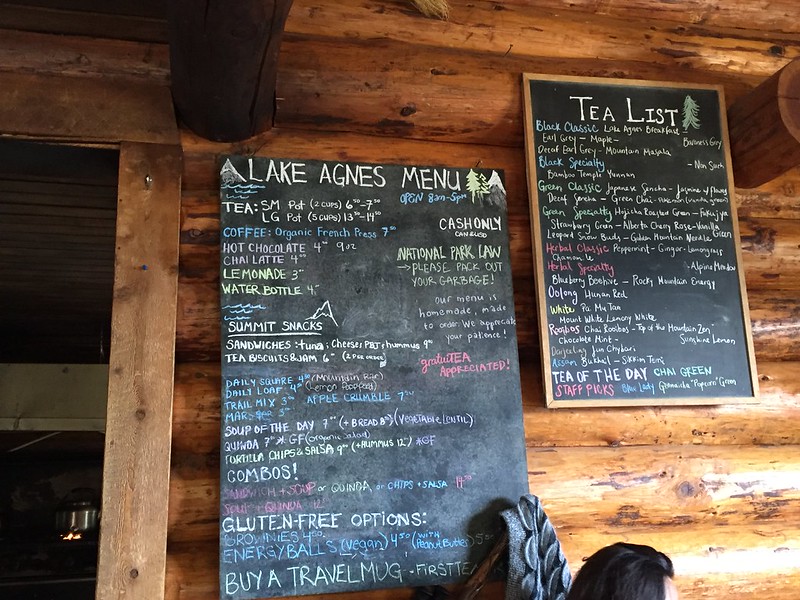 And it’s right by this extremely beautiful little lake: 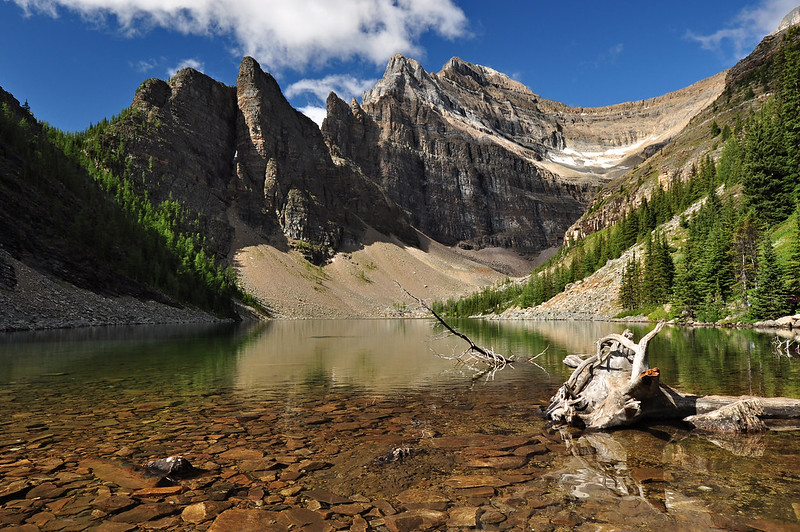 We grabbed a seat inside and ordered biscuits and tea. Very satisfying! After our little snack we hiked up to the Little Beehive, where a fire lookout once stood. All that remains is the foundation: 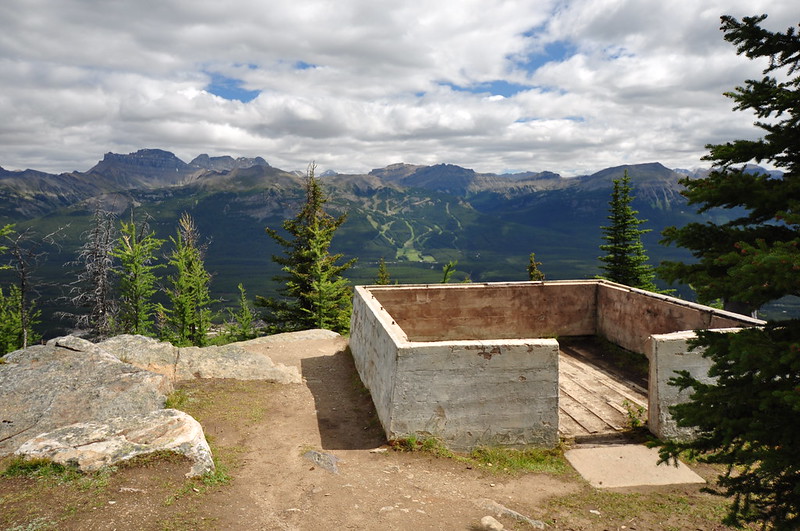 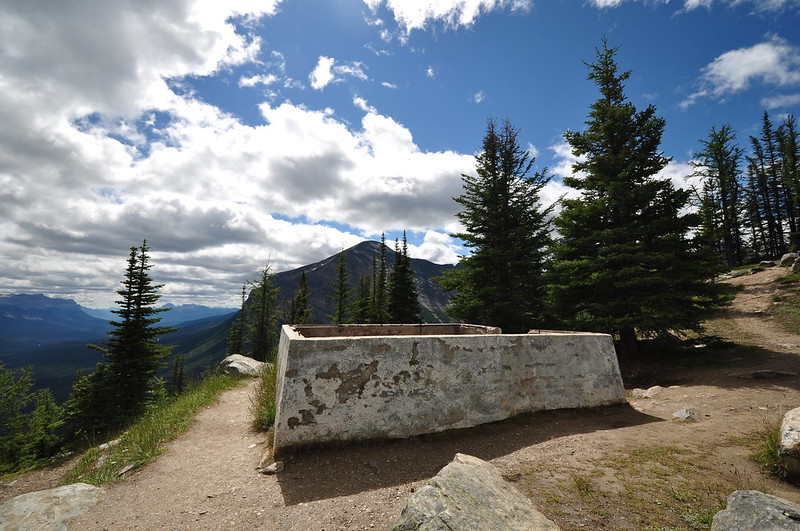 And of course the stunning view of the Bow Valley: 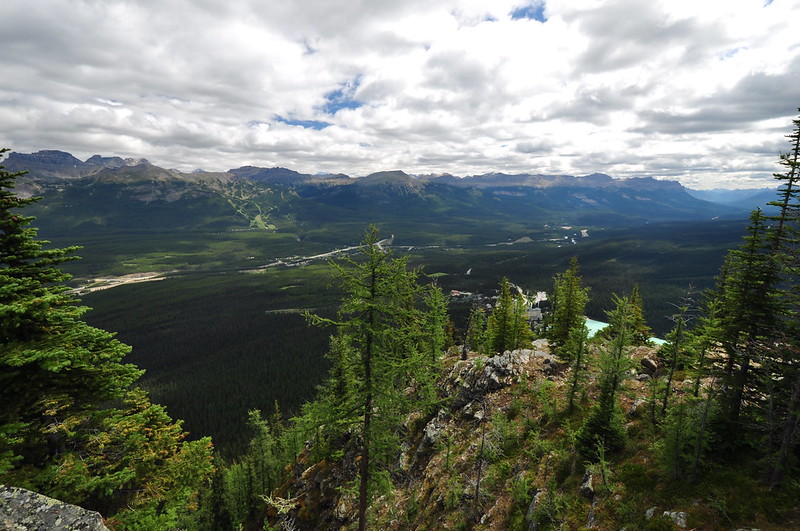 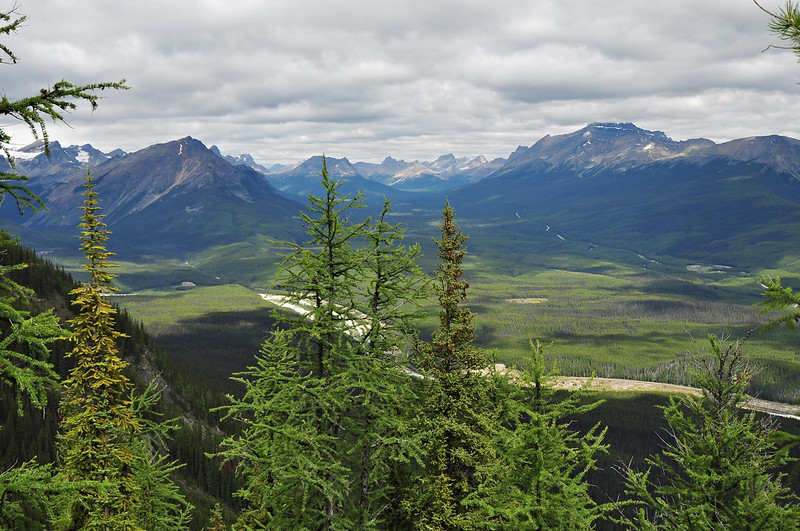 A jay hung around, hoping for handouts: 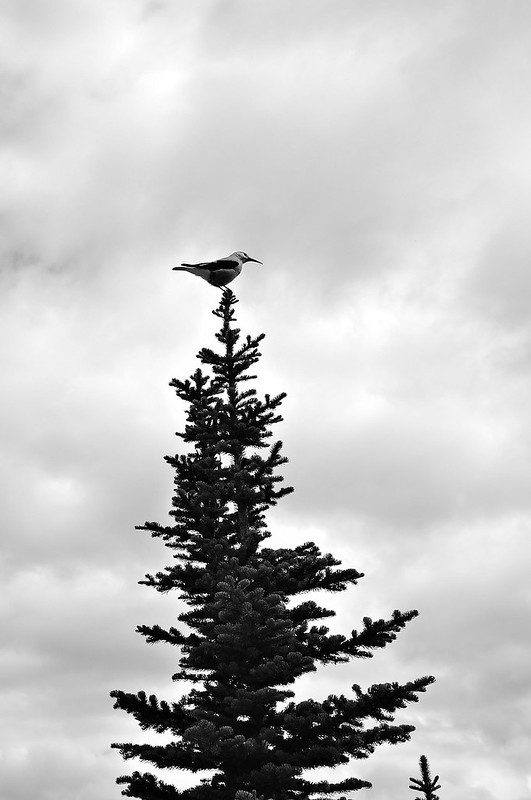 On the way back down we saw the view that had been at our backs on the way up. The long turquoise lake on the left is Lake Louise and the little lake in the center is Mirror Lake. The high point to the right of Mirror Lake is the Big Beehive, to which we were headed next. 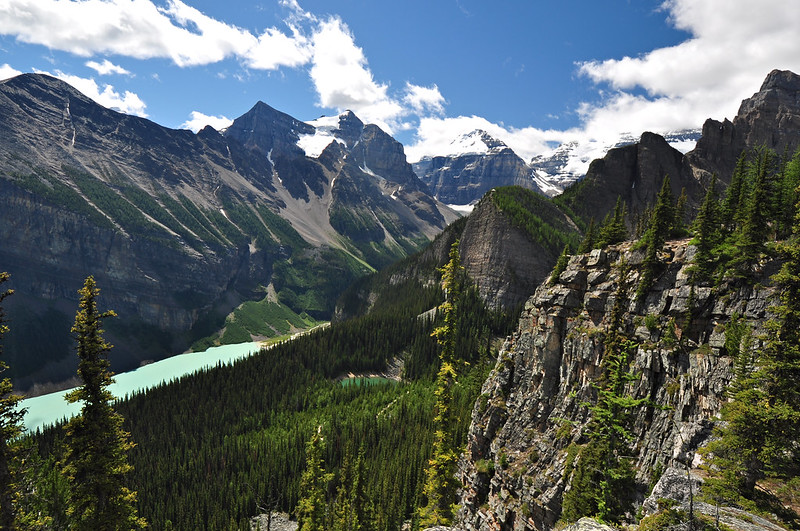 We hiked along the shore of Agnes Lake: 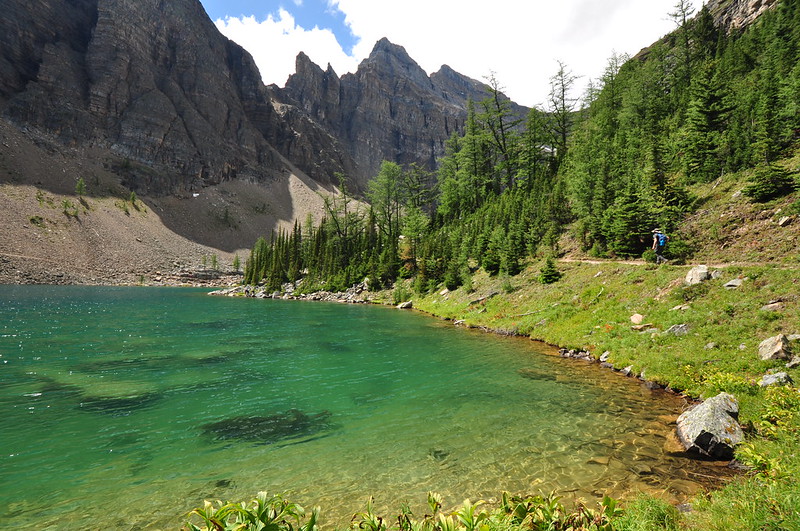 We had an impressive view to the other end of the lake where the tea house sits: 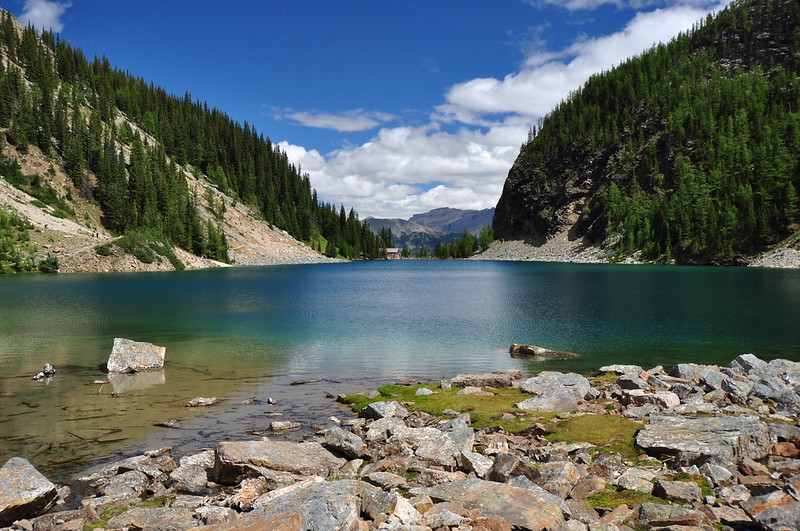 The trail starts climbing up and we could see across to the other side of the lake where we had been hiking a little while before: 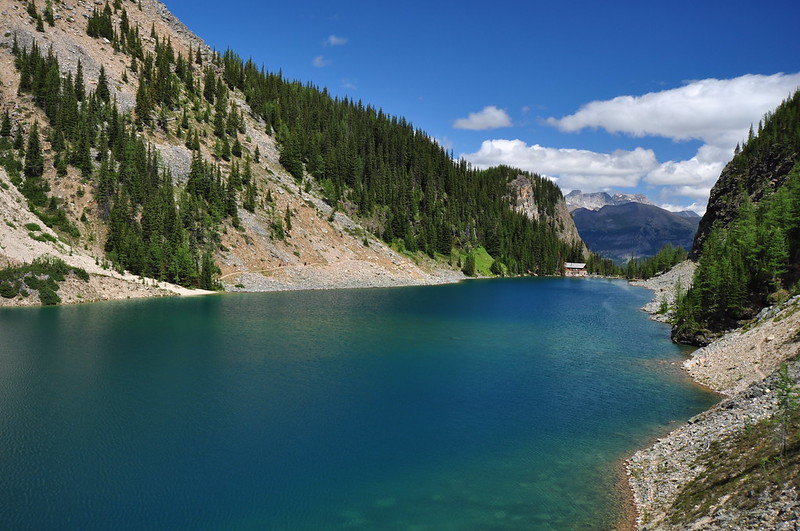 After a stiff climb, we reached the summit of the Big Beehive, which has a little wooden shelter: 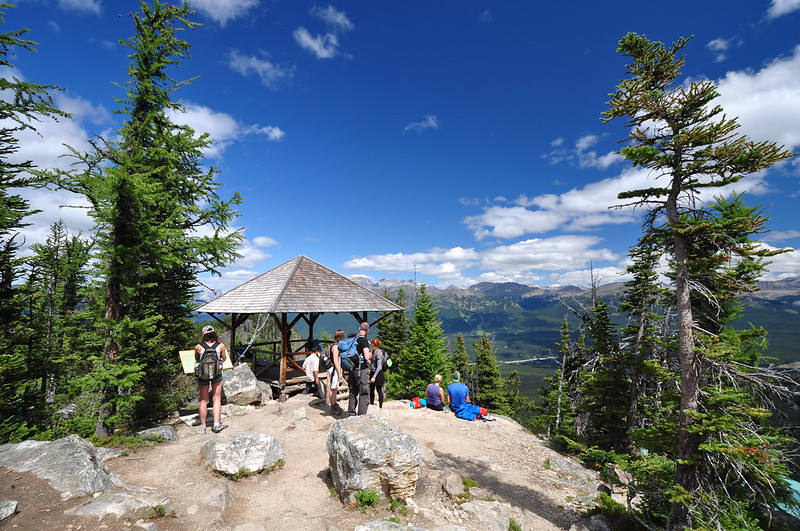 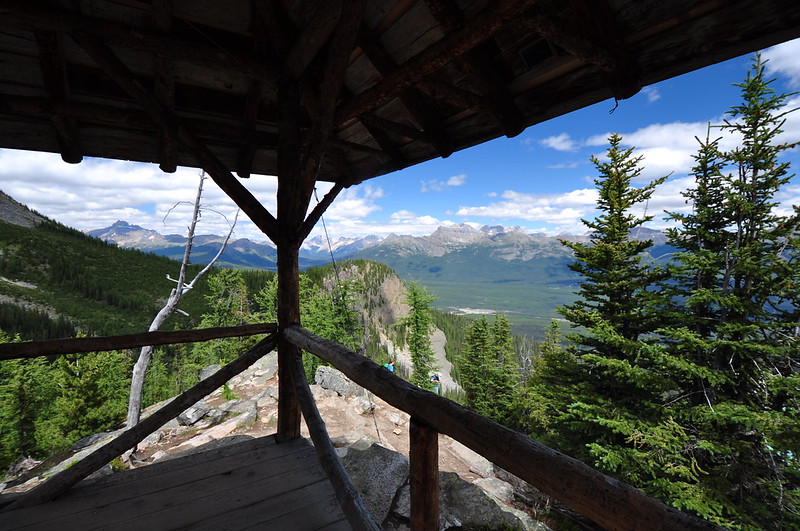 The views were incredible. Looking down on Lake Louise and the Bow Valley: 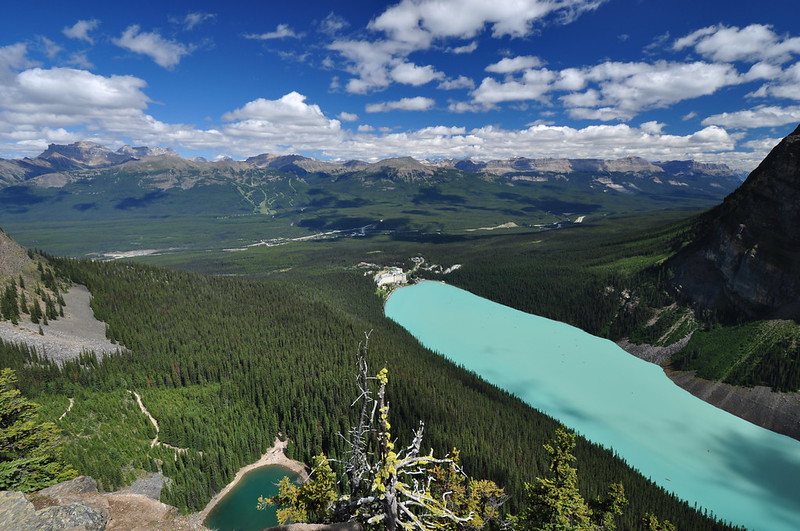 Looking up the Bow Valley. You can see the Little Beehive in the foreground: 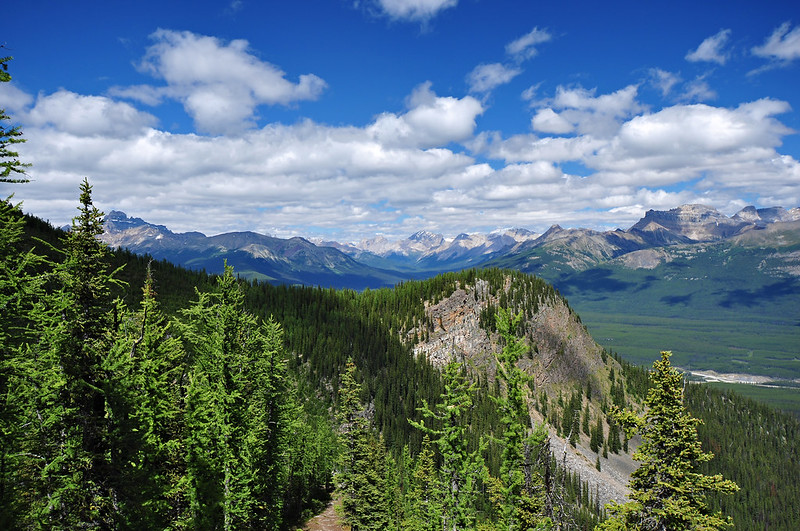 While we were chilling out and enjoying the view we were approached by another couple who asked if we’d take their photo. Turns out they were on their honeymoon too. They were from Australia and were on a 16-week tour around North America. WOW! Portland was on their list so we gave them some recommendations about what to see and do there.

This was probably the most crowded hike we did the whole trip, but the scenery was spectacular so it was definitely worth it.