When we woke up this morning we were delighted to see blue skies over the campground. 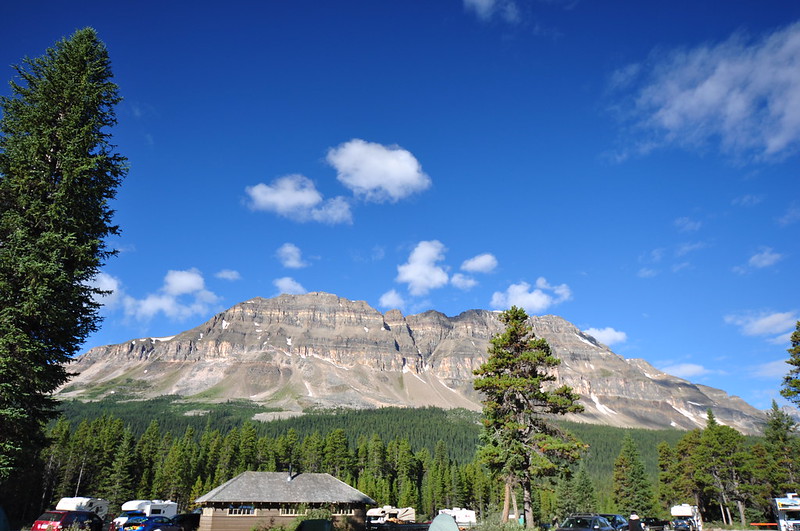 We decided to hike to Bow Summit, which involved parking in the same lot as all the people visiting the Petyto Lake viewpoint and hiking up an old fire road. Peyto Lake is a HUGELY popular stop on the Icefields Parkway and the place was crawling with people. It’s about a 10 minutes walk from the parking area to the viewpoint, where there were many people and many selfie sticks. I snapped a very quick photo and then we kept moving. 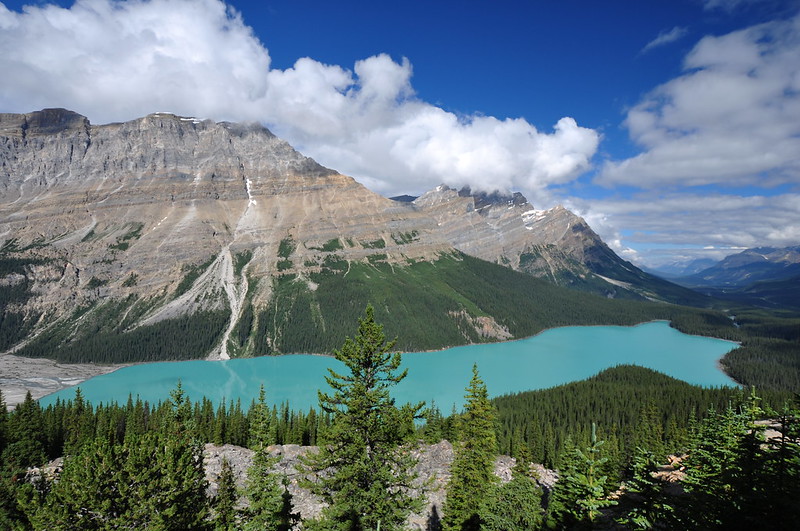 This place is obviously LOVED TO DEATH. One of the signs of that are the many user trails cutting through the forest. There were dozens of them. Yeesh. 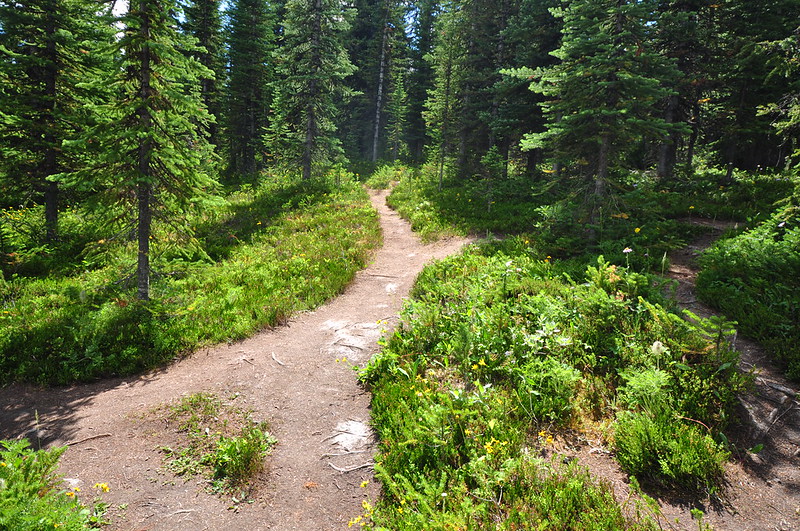 Once we left the paved trail and hopped on the old road, we quickly left the crowds behind. 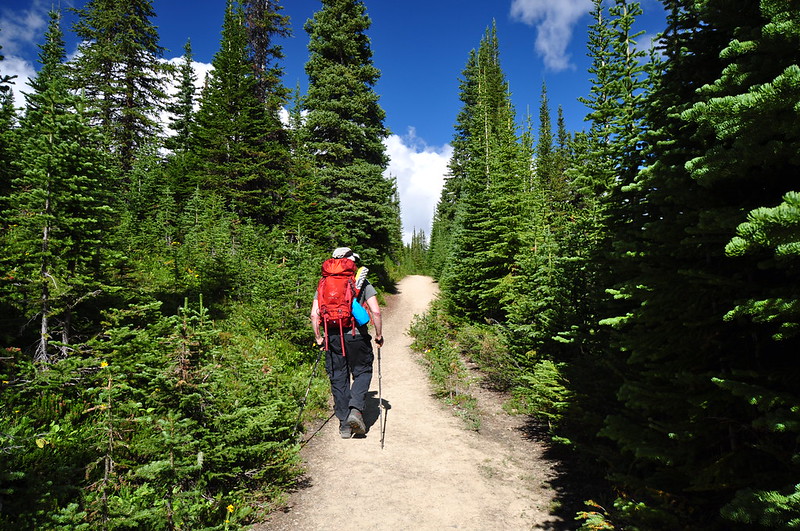 The views got better and better as we climbed: 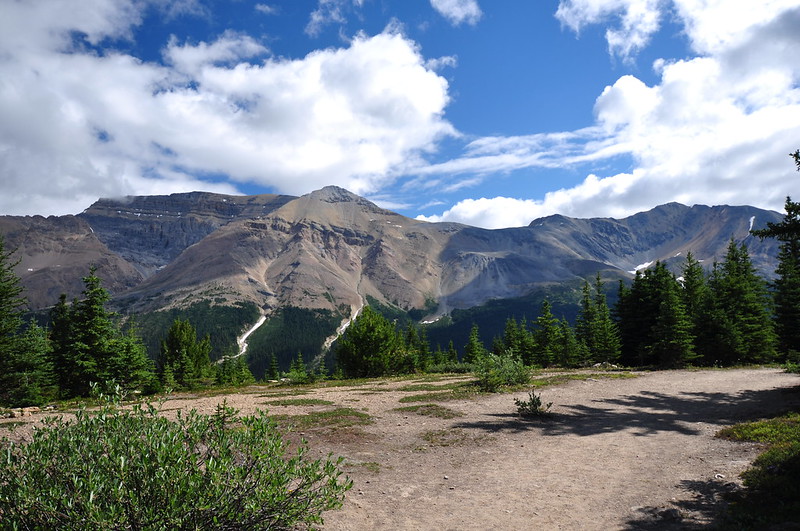 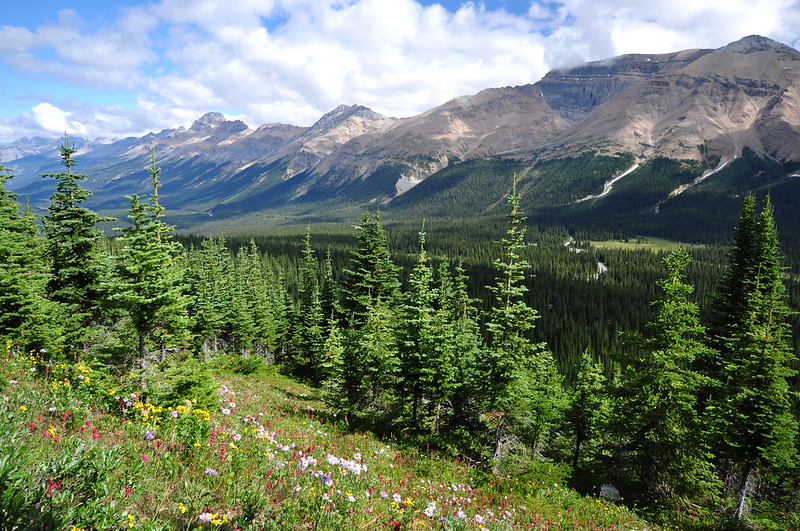 We reached a confusing “junction” where an unofficial boot path scrambled straight up the hill to a viewpoint. It looked like most people went that way, but Bow Summit was not up there, and the path looked steep, sketchy, and crumbly. We stayed on the old road and kept going. 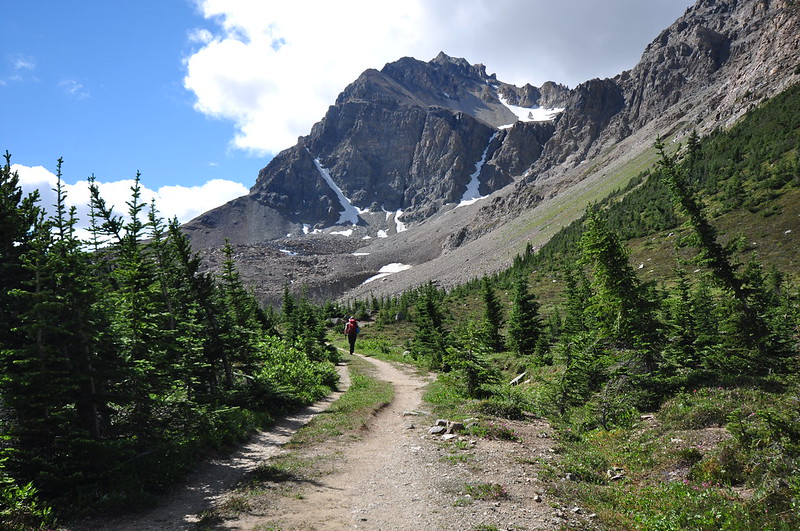 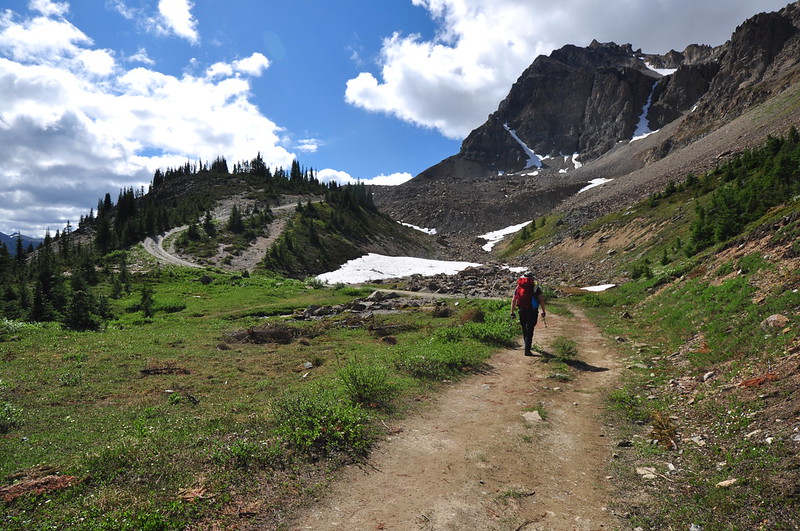 We got a rocky area where we saw two marmots hanging out. Didn’t get the greatest photo, but here it is: 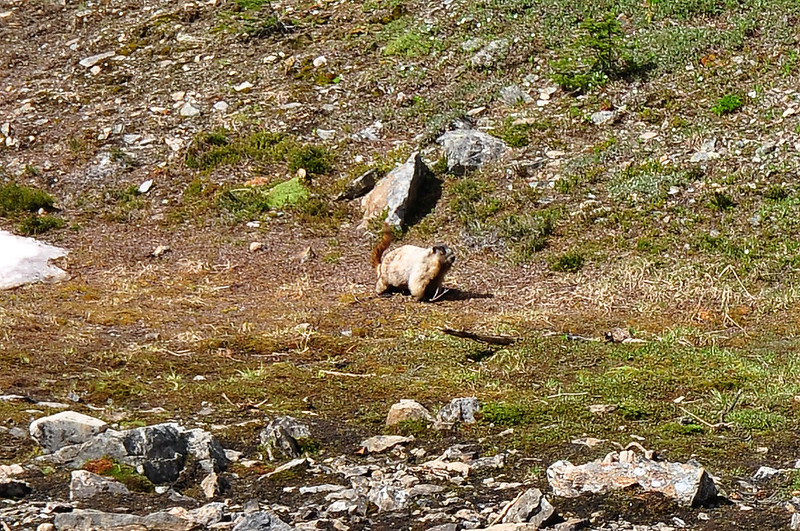 The road ends at Bow Summit, a grassy knoll where a fire lookout once stood. 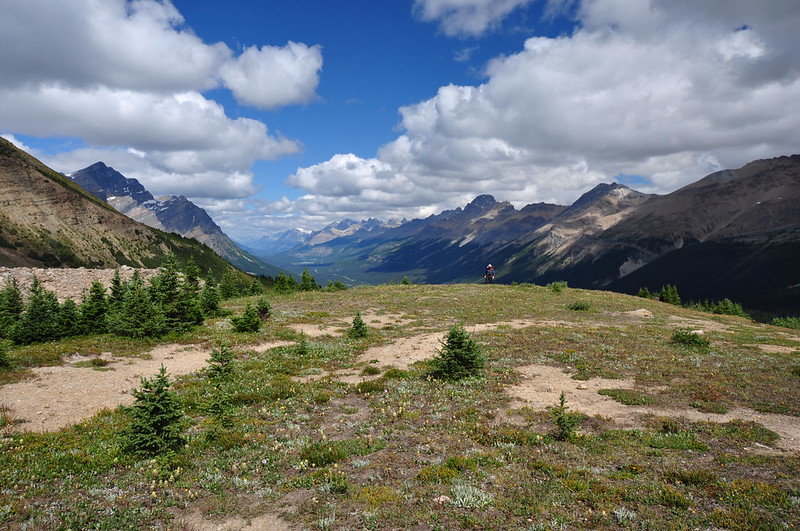 The views are spectacular. This is looking north: 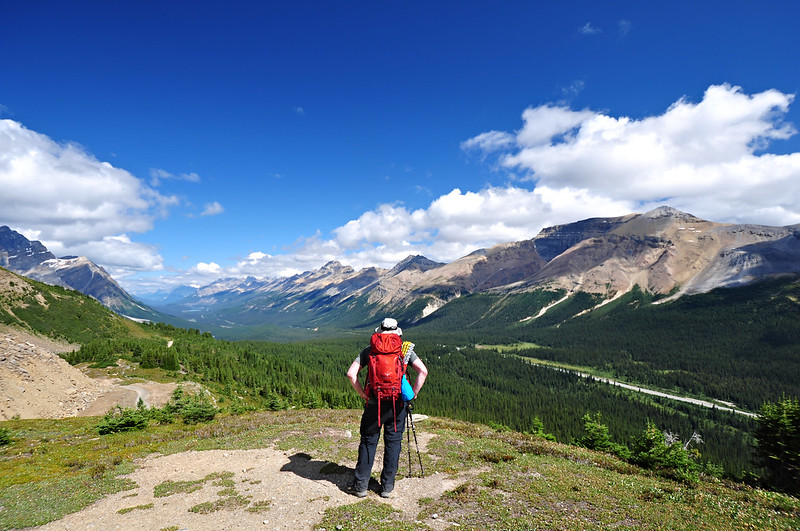 We sat and ate a snack here, then followed a short trail a bit further beyond the knoll to get views of Bow Lake to the south: 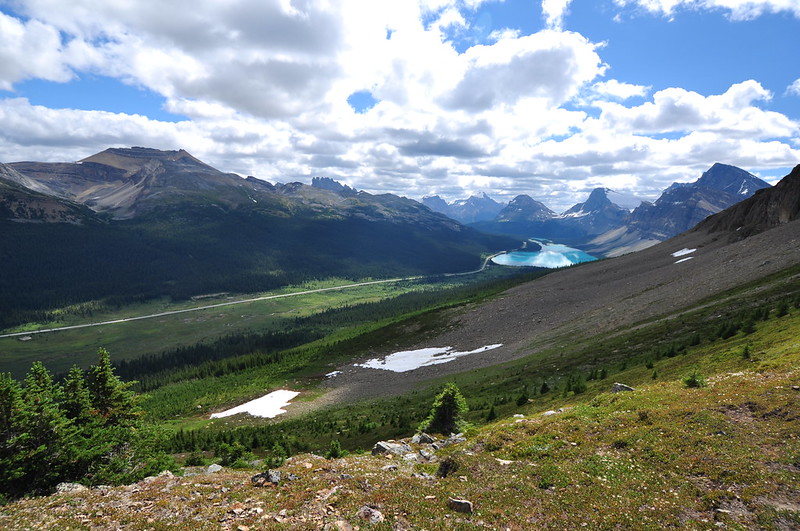 Looking back at Bow Summit and the views beyond: 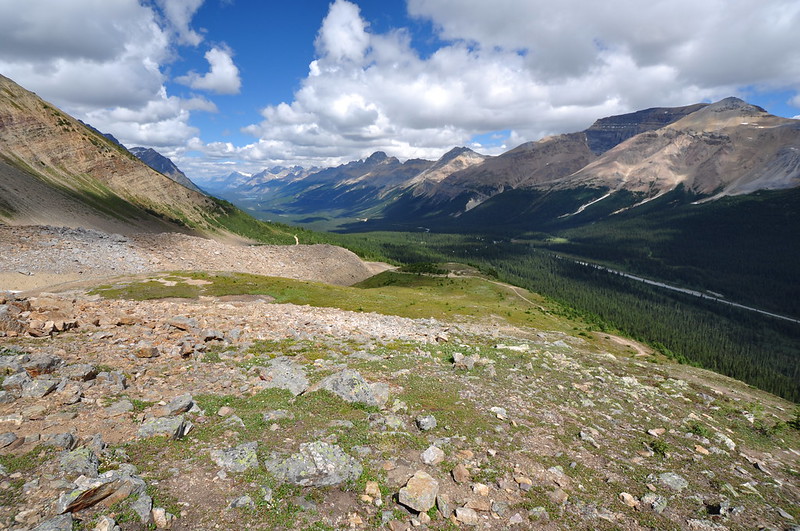 As we hiked back down the road we spotted a pika on a rock in a big rockslide. He held still for a photo, amazingly enough! 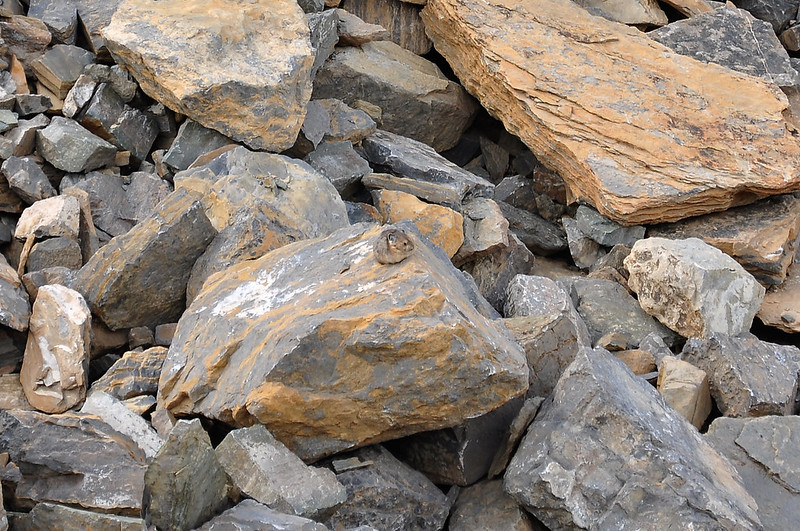 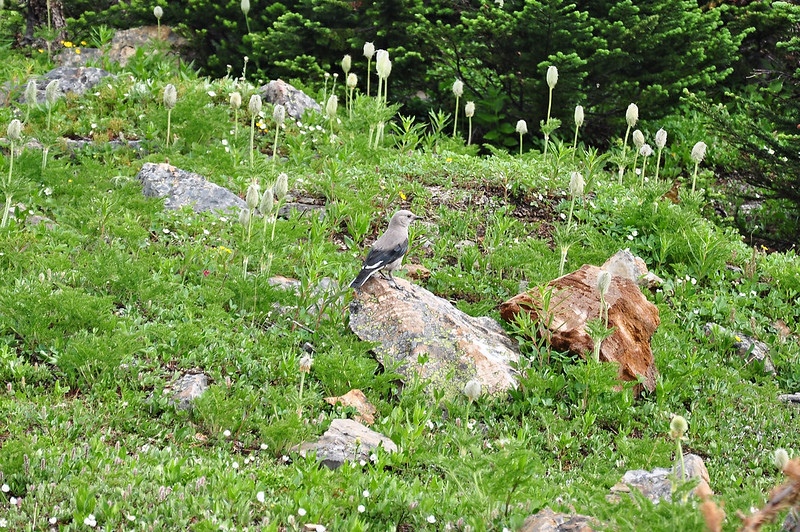 Greg and I spotted a trail branching off the road to the left and heading across the meadows. It appeared to lead to that other viewpoint, the one with the steep scramble trail. This trail looked like a nicer approach so we took it. 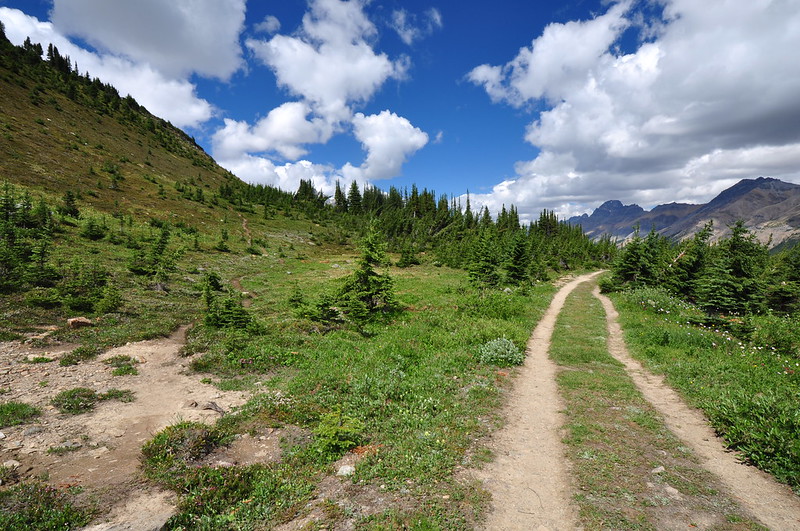 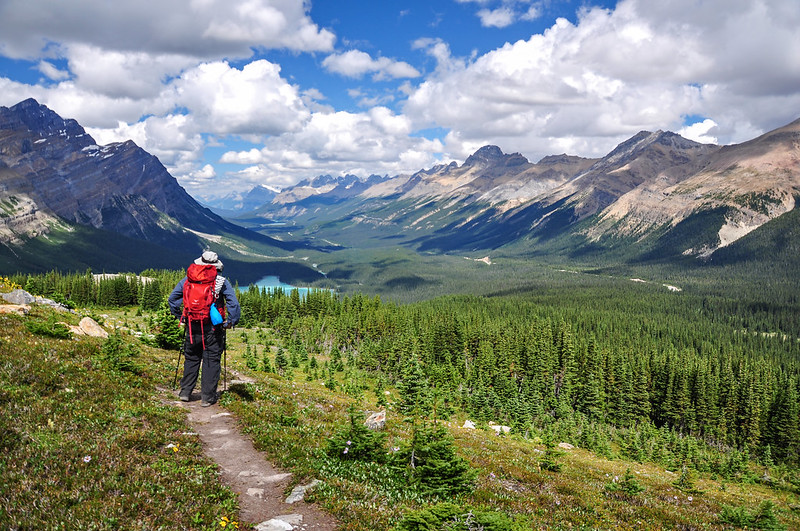 We hadn’t seen much in the way of wildflowers so far, but that changed on this little spur trail. Yowza! 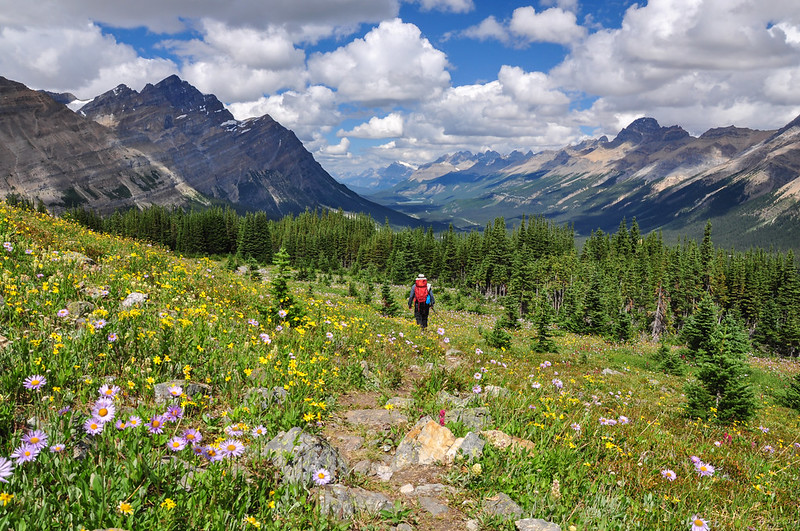 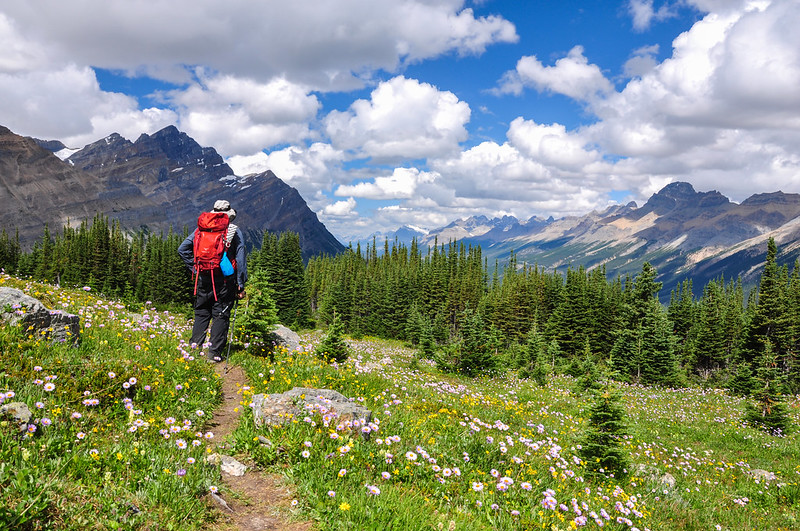 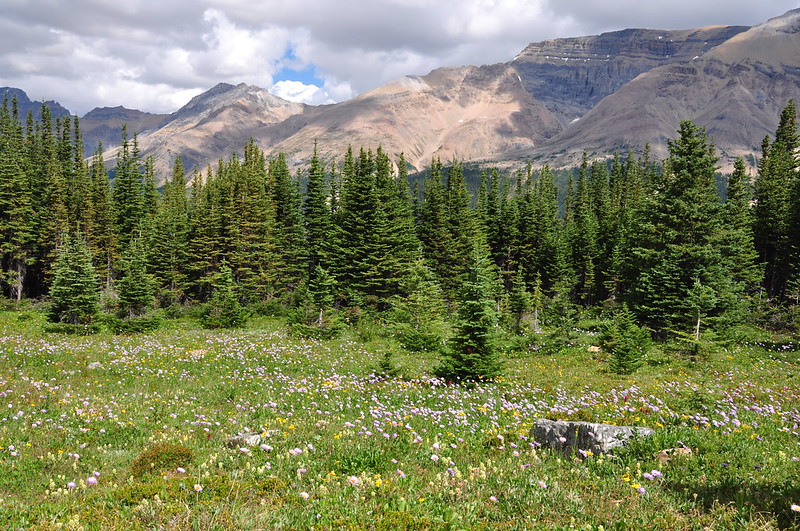 The trail ended at a huge rocky area where lots of people had erected rock stacks. People, please don’t do this! At the far end of the rocky area was a viewpoint overlooking Petyo Lake. This was a much nicer way to view the beautiful lake than from the crowded viewing deck far below! 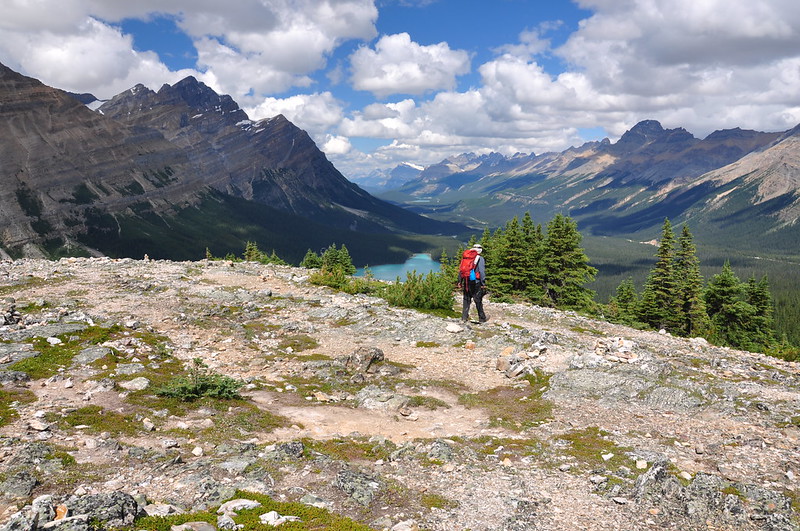 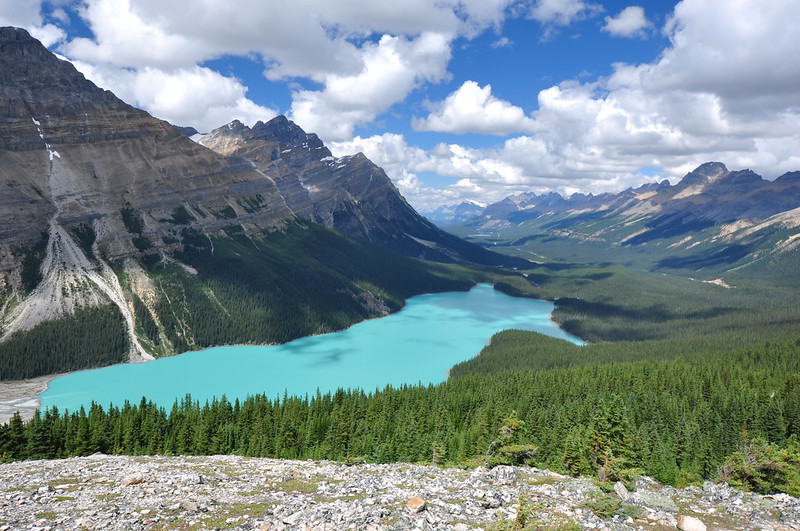 We could see the alluvial fan at the inlet end of the lake: 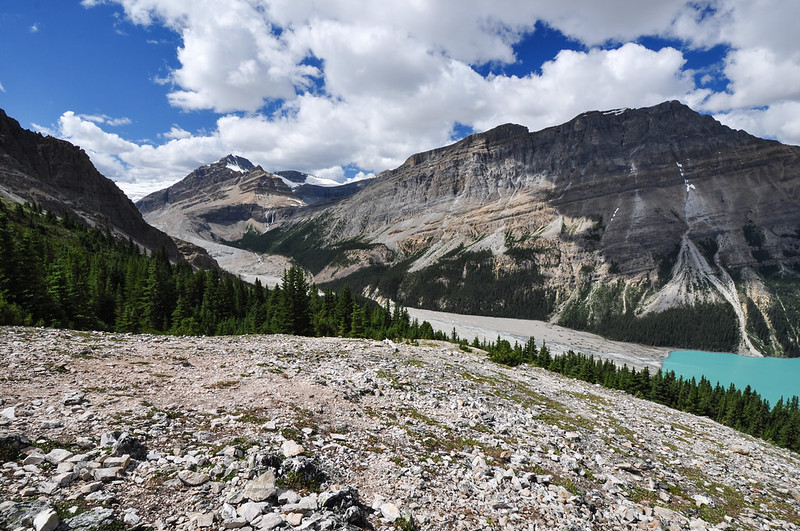 We retraced our steps back to the road and followed it down. 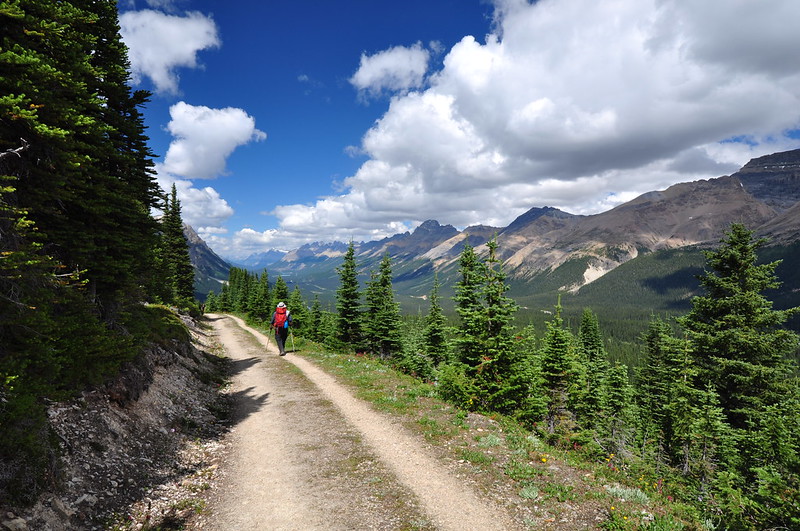 There were even more cars in the lot than there had been several hours earlier. We headed south to Bow Lake. We had originally thought about doing a second hike today, to Bow Falls. But we decided to just hang out by the lake instead. We managed to snag a parking spot, then headed to Num-Ti-Jah Lodge to check out the gift shop (ahem, “trading post”). The lodge was built by hunter and trapper Jimmy Simpson. It is pronounced “numm-TAH-zjah” and is a Stoney expression for the pine marten. The lodge is still in operation today and you can pay a lot of money to stay in one of the rooms. 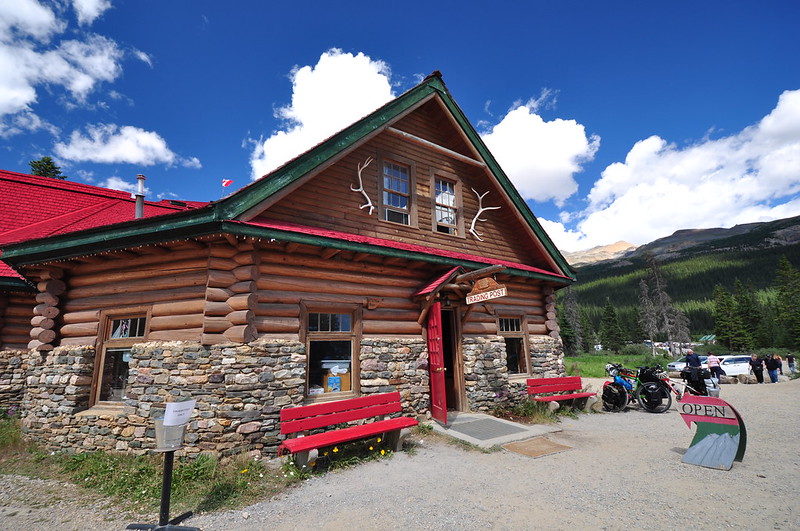 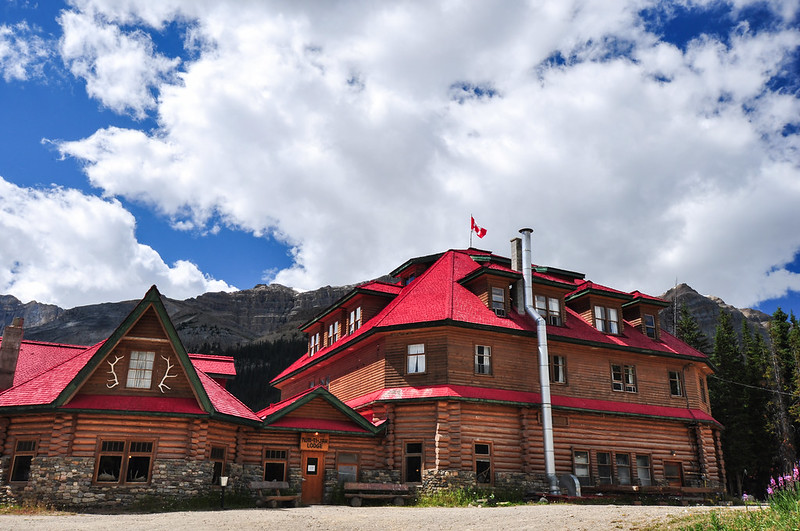 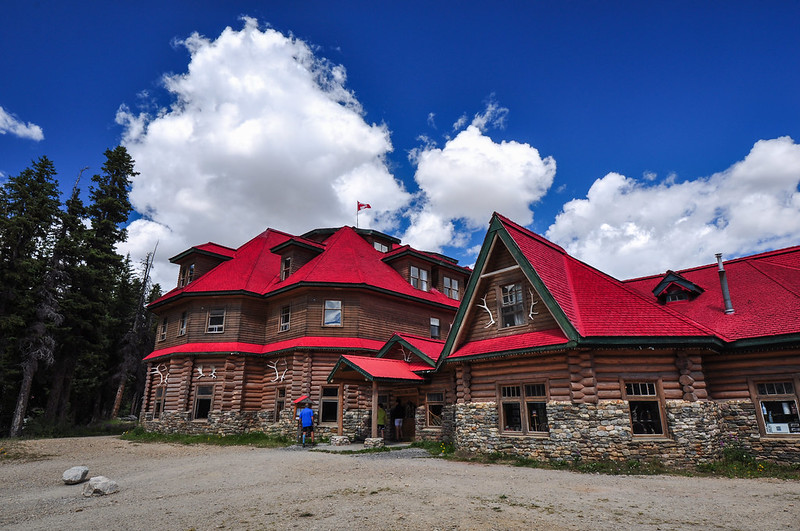 The gift shop was playing the most dreadful soft rock music. Blech! We did not linger and got the hell out of there. It was much nicer down by the lake. The people-watching was fascinating, especially as tour buses came and went. One woman was wearing a turtleneck sweater despite the relatively warm day. Another woman was dressed very nicely, like she was going out for a nice evening, including nice dress shoes. Lots of people had new-looking hiking boots or sneakers. We ate snacks, read, and chilled out. It was nice. 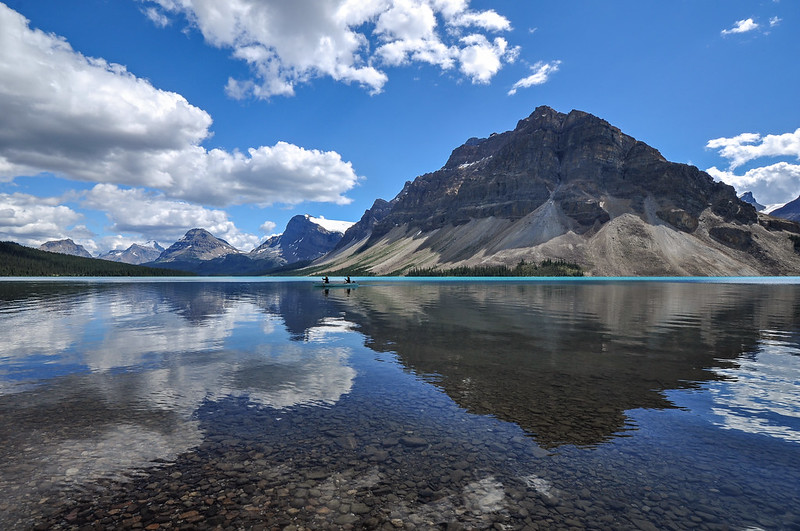 At the campground that night I got a few nice shots of Mosquito Creek, which really is quite pleasant. 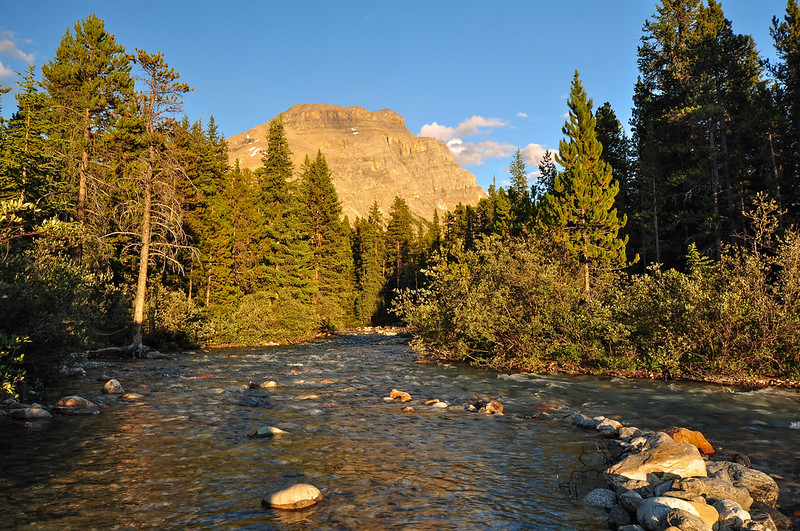 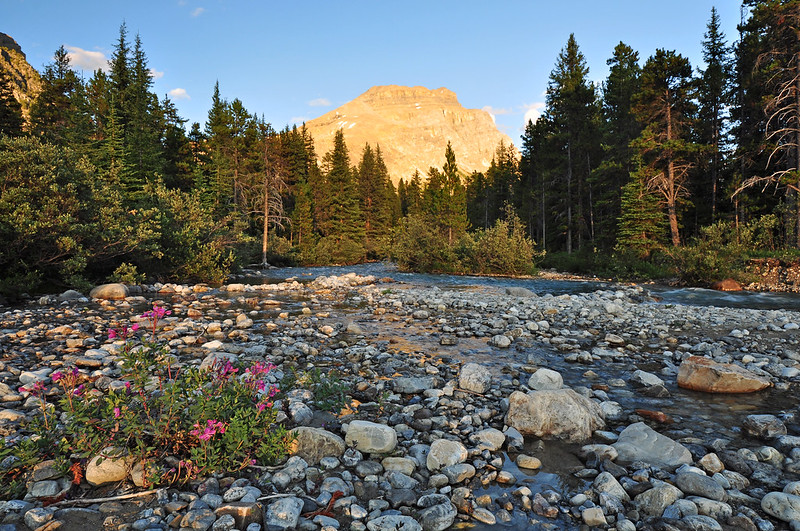