We decided it was pointless to backtrack and try to find a site at Kicking Horse Campground in Yoho National Park. Our chances were just too slim. So we broke camp at the Herbert Creek picnic area and headed north on the Icefields Parkway to see if we could snag a site at Mosquito Creek Campground. When we arrived there was only one site available so we took it and felt lucky to get it. The coming Monday was a holiday in Canada so the long weekend meant campsites would be impossible to get. The fact that we got the last available site I took as a sign that we were meant to stay in the area (last night we had been debating whether we should head for Montana or Idaho or something). It was pretty windy the previous night and that seemed to clear out the smoke. 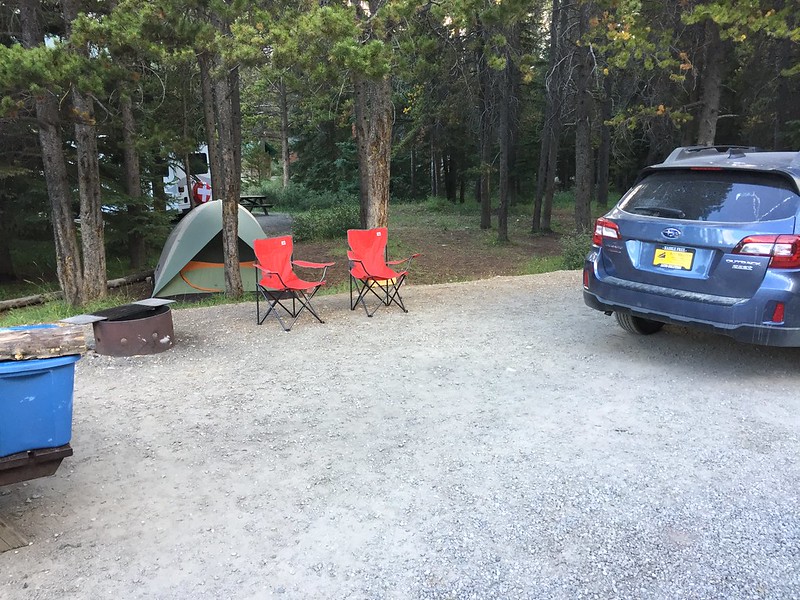 An alcohol ban notice was posted at the campground registration kiosk. I said to Greg that it was probably a situation where a few bad apples ruined it for everyone once and now this ban has been put in place. When I got home and looked it up, sure enough, that’s what happened (Noisy campers mar long weekend). What’s weird is that it only applies to some campgrounds in the parks, not every single one of them. 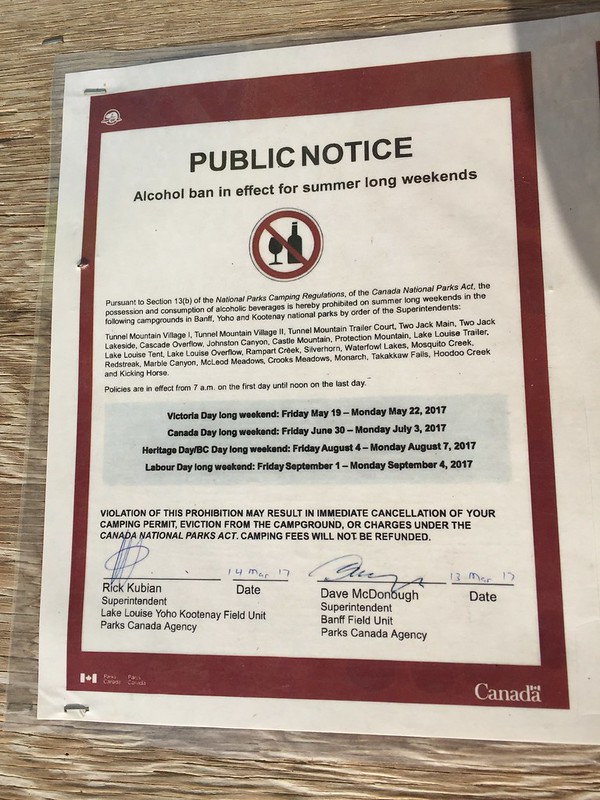 We headed north, crossed into Jasper National Park, and briefly stopped at the Columbia Icefield Center for a weather report. It had been mostly sunny at the campground but gotten increasingly cloudy as we drove north. The weather for Jasper called for a 30% chance of rain, but we decided to do the Wilcox Pass hike anyway.

The first stretch of trail was eroded with many exposed roots, although we would come to learn that this was NOTHING compared to later hikes on this trip. 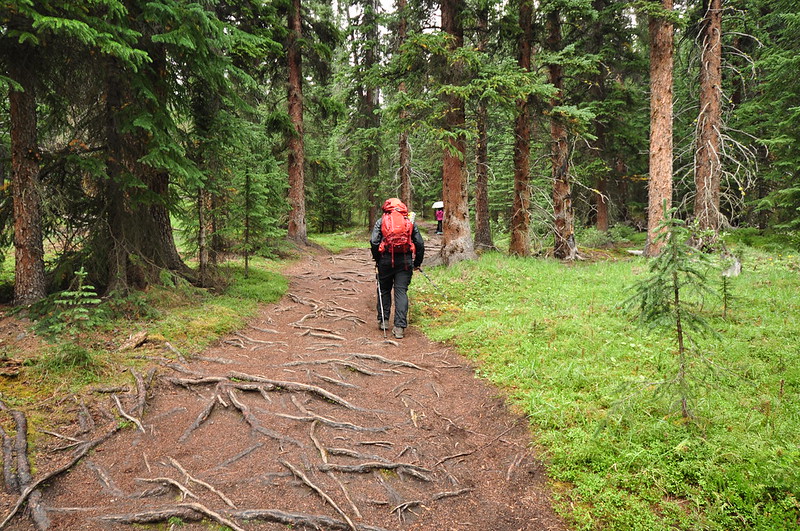 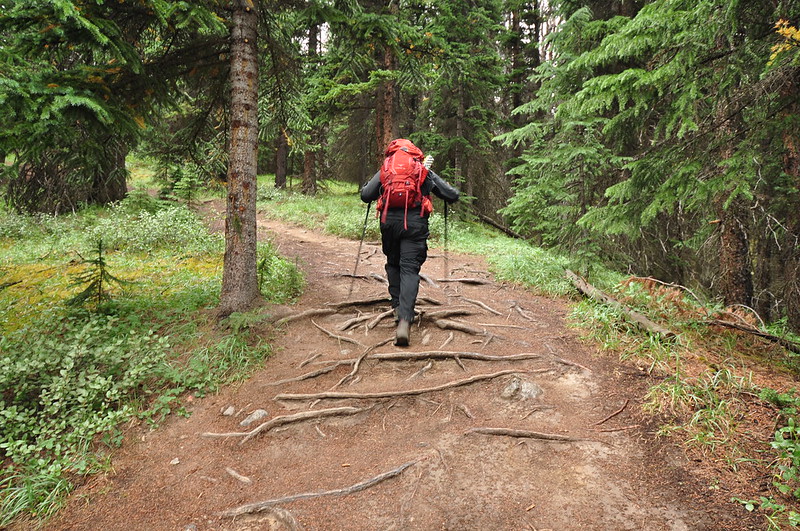 We broke out of the trees and started getting views down to the highway below and across to the mountains on the other side: 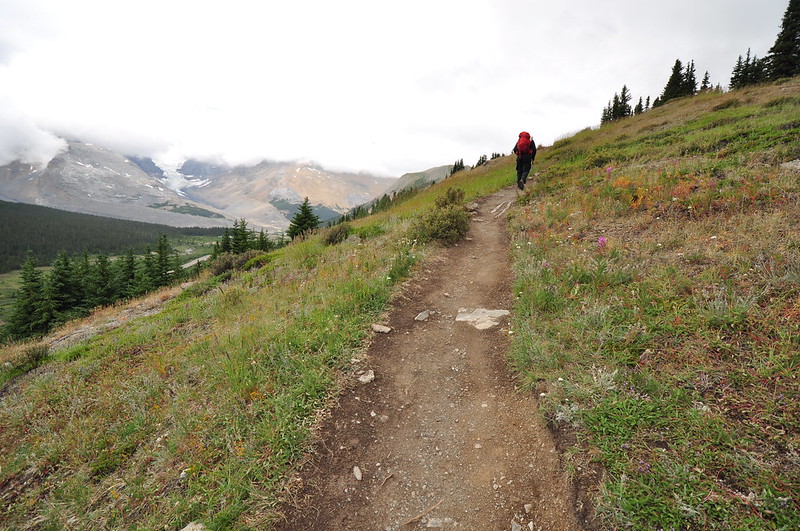 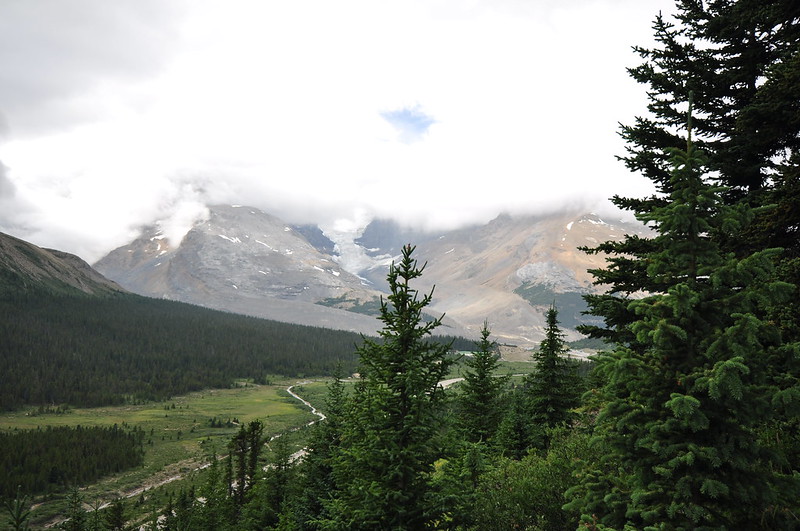 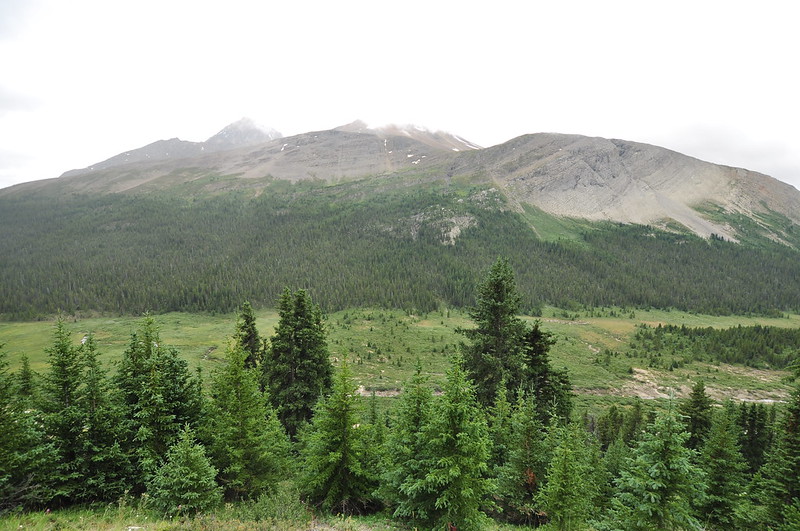 From here on out the trail stayed out in the open: 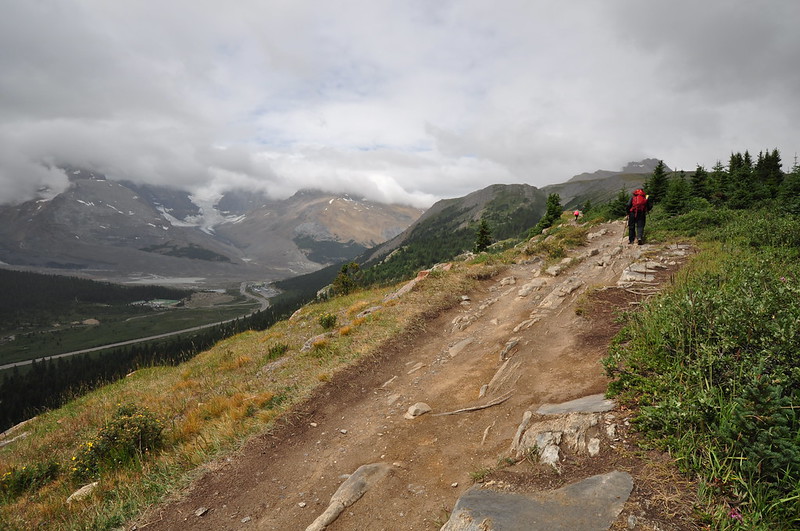 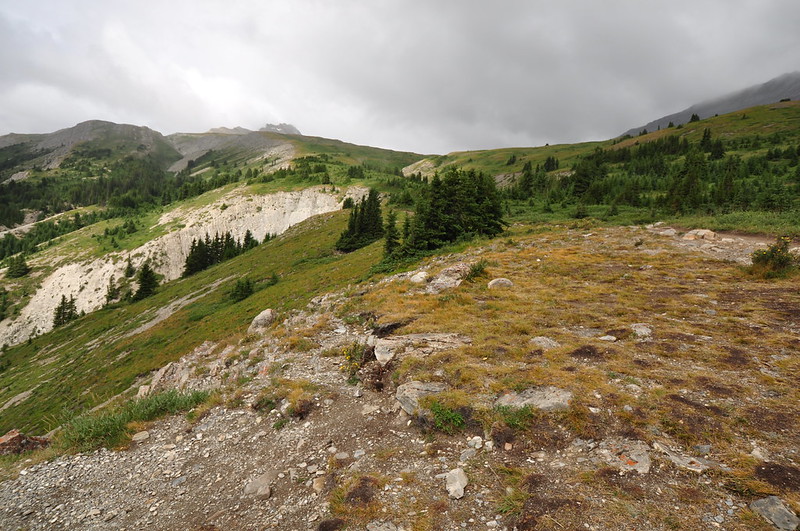 Red chairs at a viewpoint: 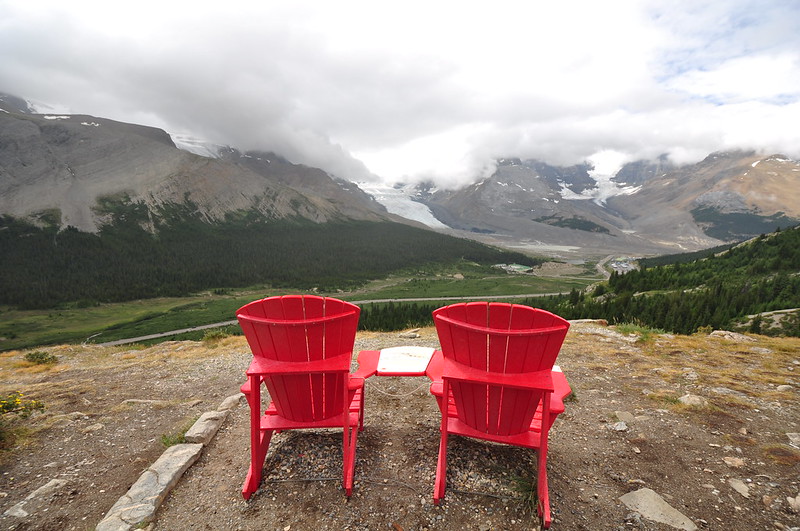 From the red chairs we could see the Athabasca Glacier and the Icefield Center, although later we’d get even better views of it. 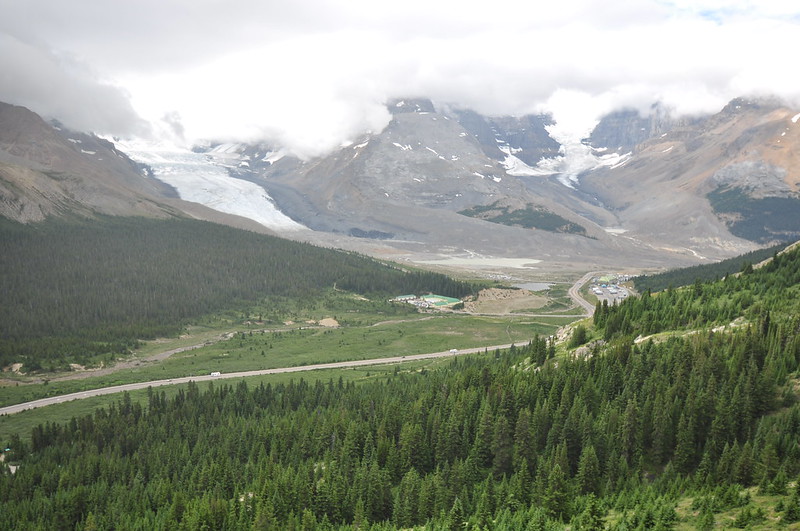 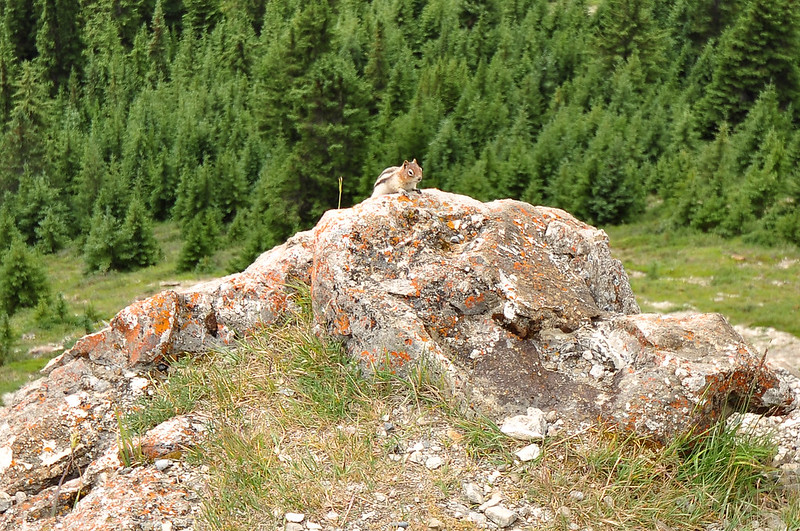 The trail traversed meadows that felt like the Scottish moors, especially under the cloudy skies: 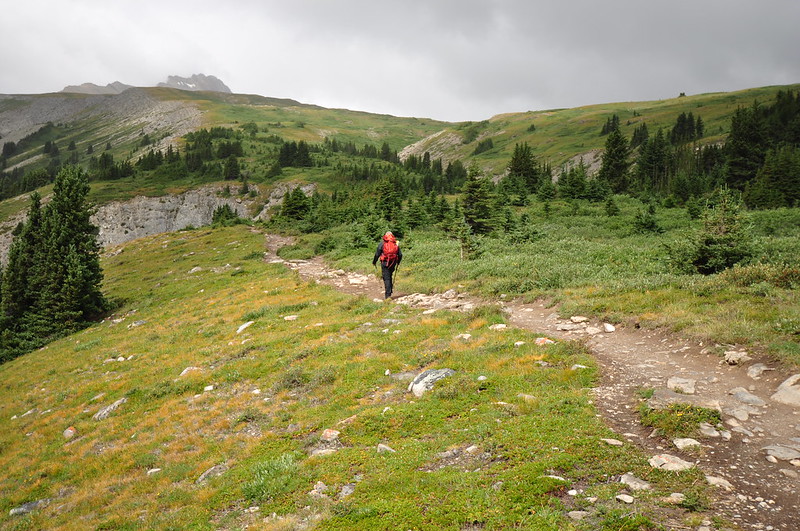 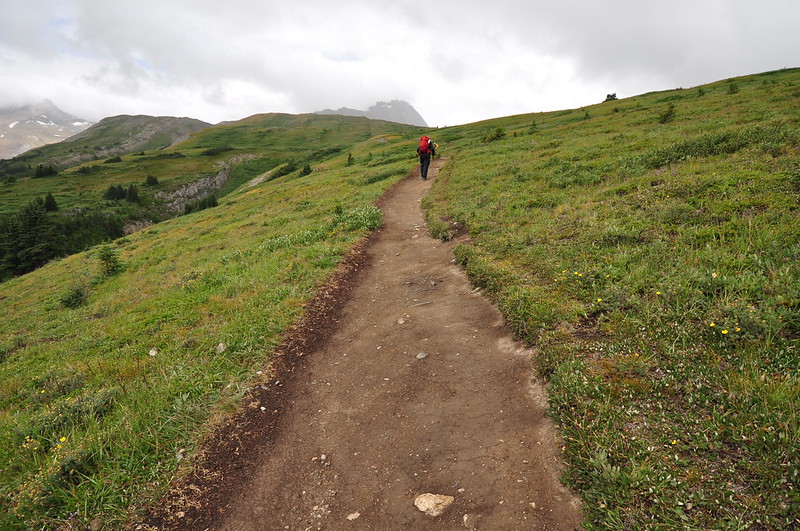 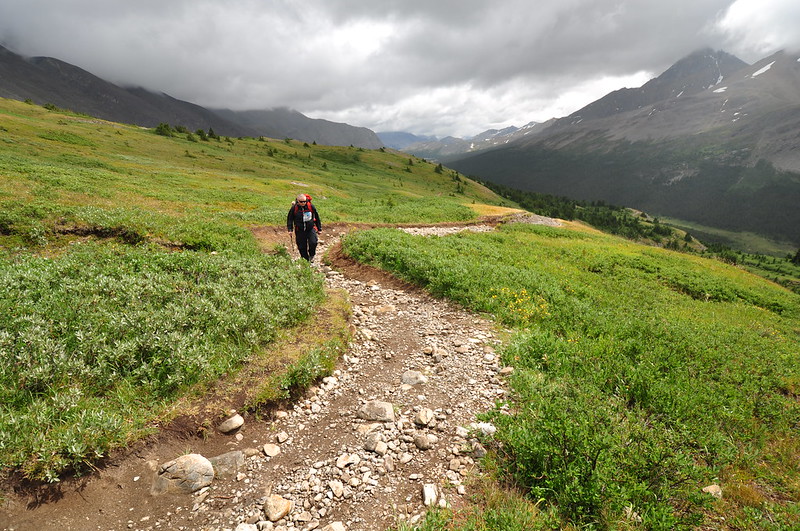 We crossed a lovely gurgling creek: 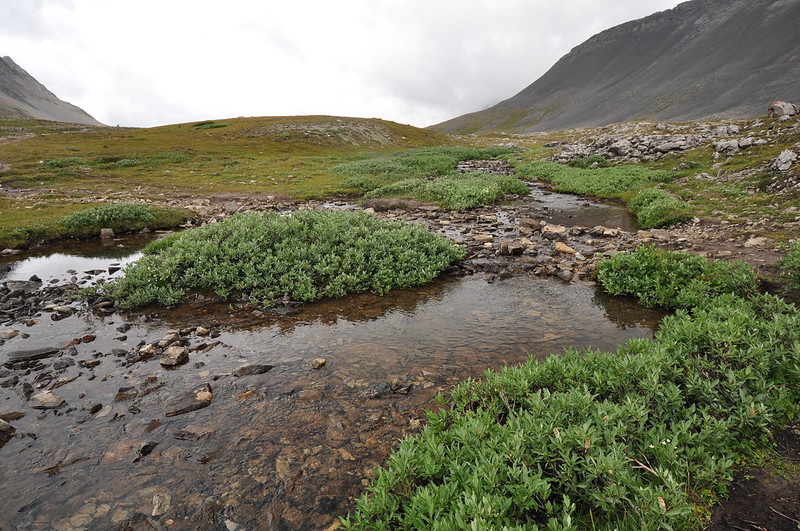 Then the trail turned abruptly left and headed to the viewpoint overlooking the Athabasa Glacier. From here the trail was clearly defined, but was nevertheless marked by wire-enclosed cairns that were put in place by the park. Unfortunately people had felt the need to pile onto these cairns with rocks of their own. What the hell? This one was particularly bad, with rocks piled up in front of the yellow diamond that make these cairns visible in cloudy or dark conditions. 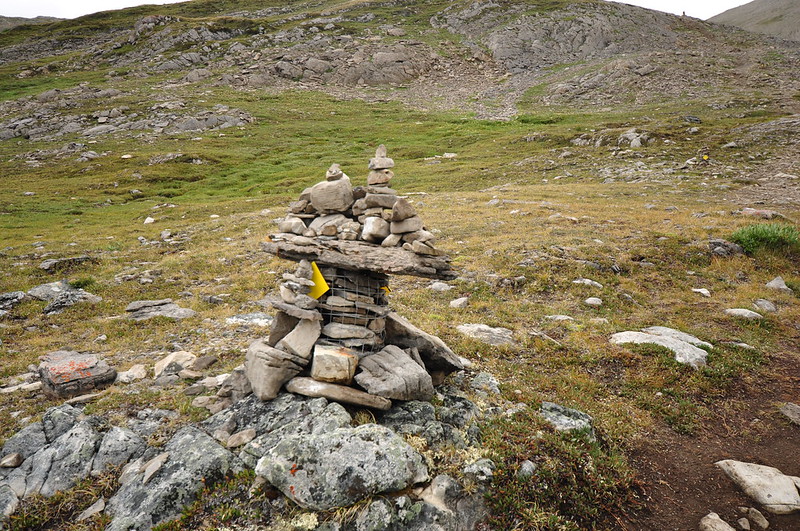 Looking back at our route, with Nigel Peak on the left: 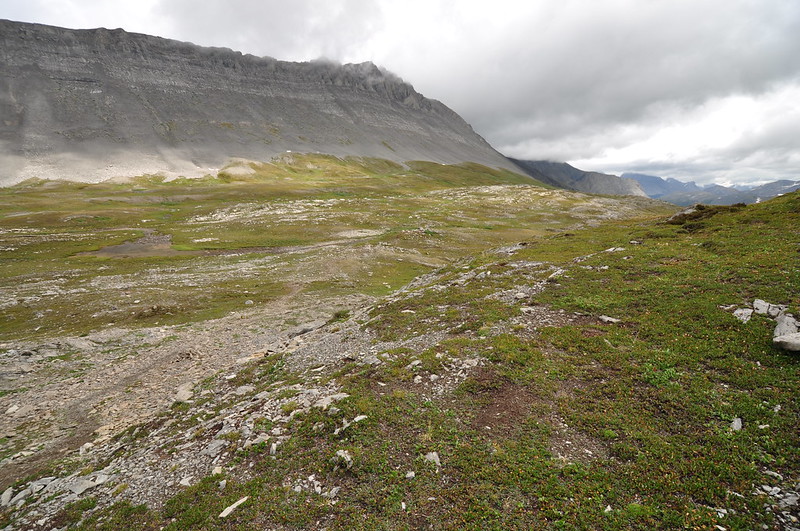 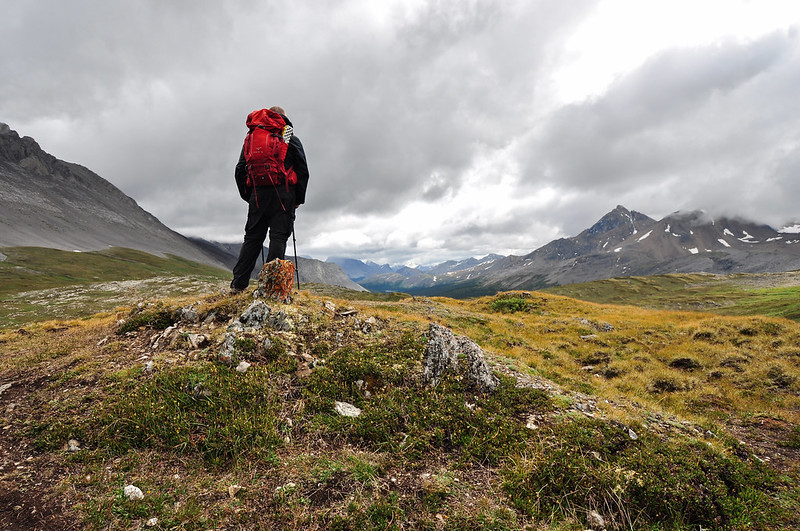 There weren’t a ton of wildflowers, but we saw some: 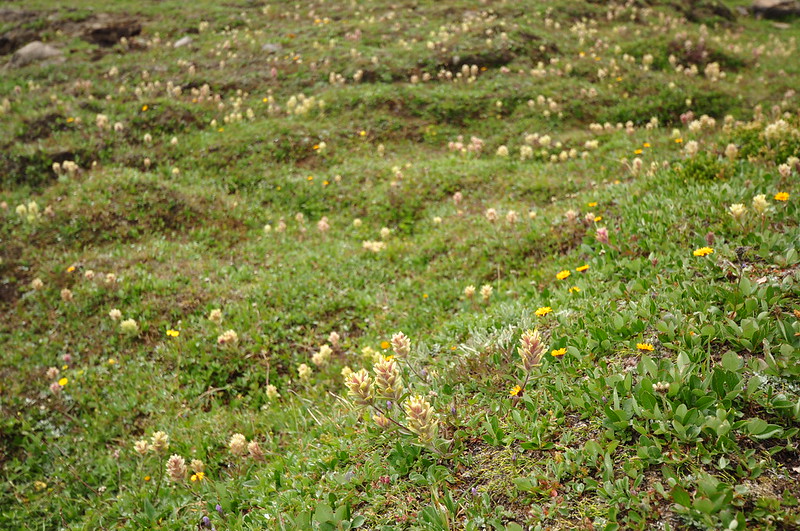 Approaching the viewpoint, with the Athabasca Glacier beyond: 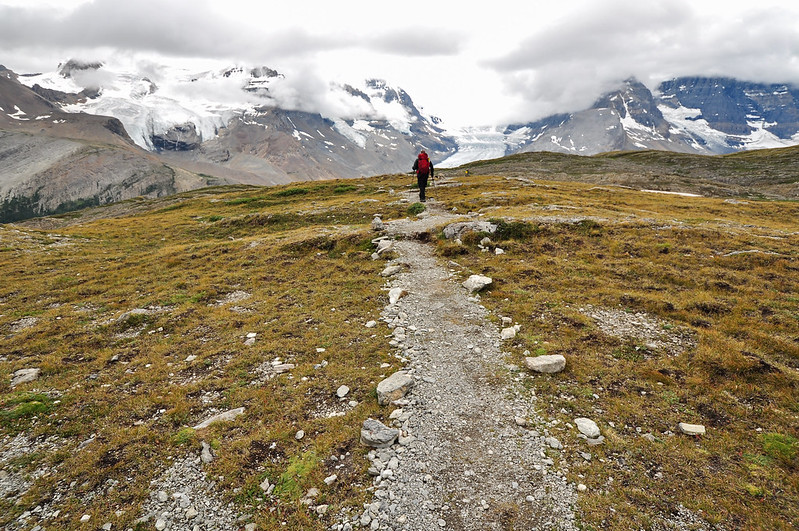 From the viewpoint we could see the Columbia Icefield Center below us and the Athabasca Glacier beyond: 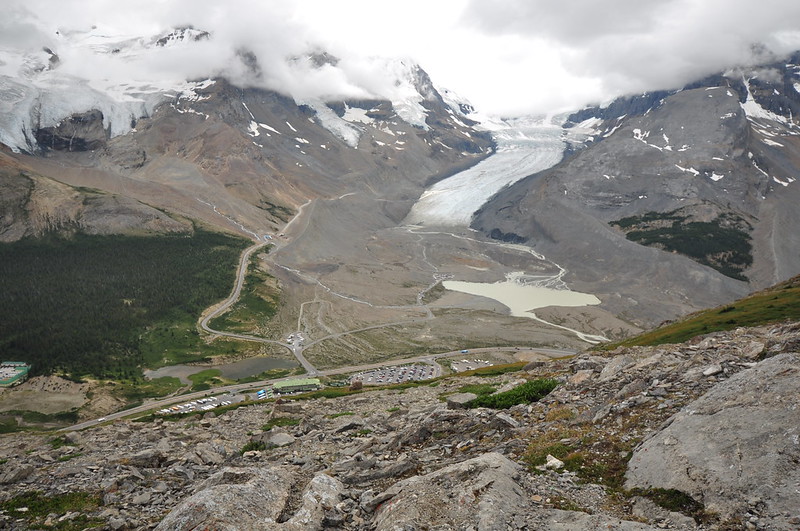 Looking south from the viewpoint, down the Icefields Parkway: 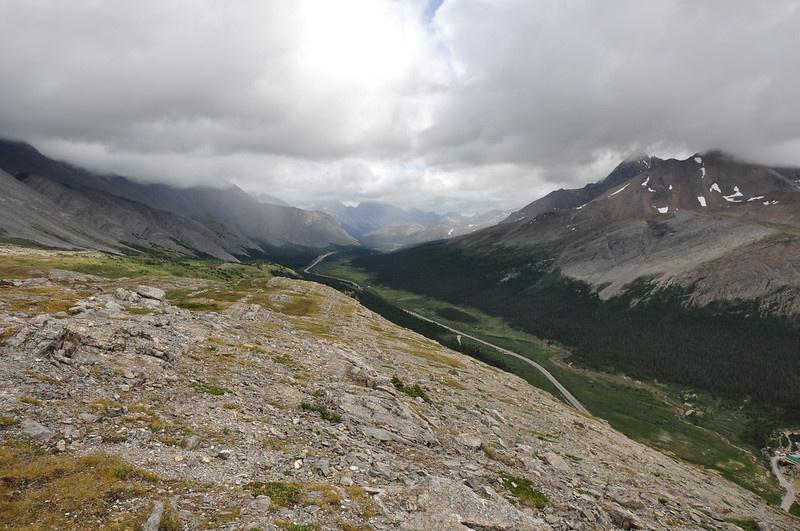 View of Dome Glacier. Part of the Athabasca Glacier is visible on the left: 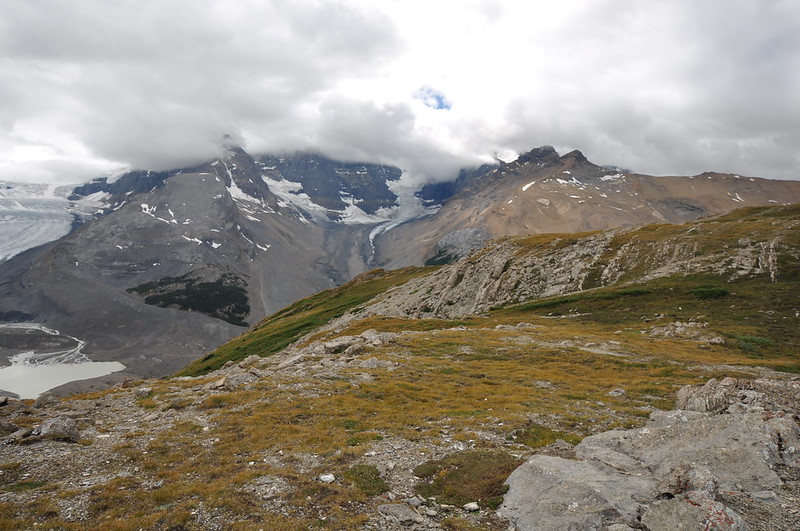 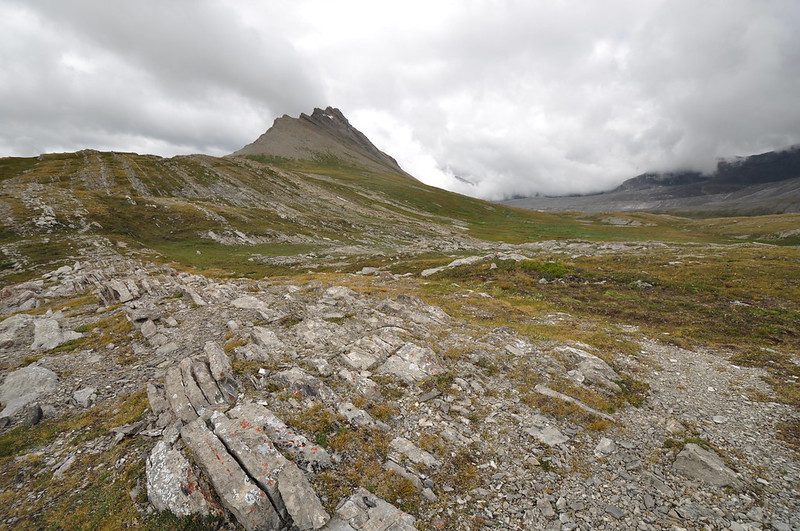 A panorama encompassing west to north, with the Athabasca Glacier on the left and Wilcox Peak on the right:

Hiking back down, with Mt. Athabasca beyond: 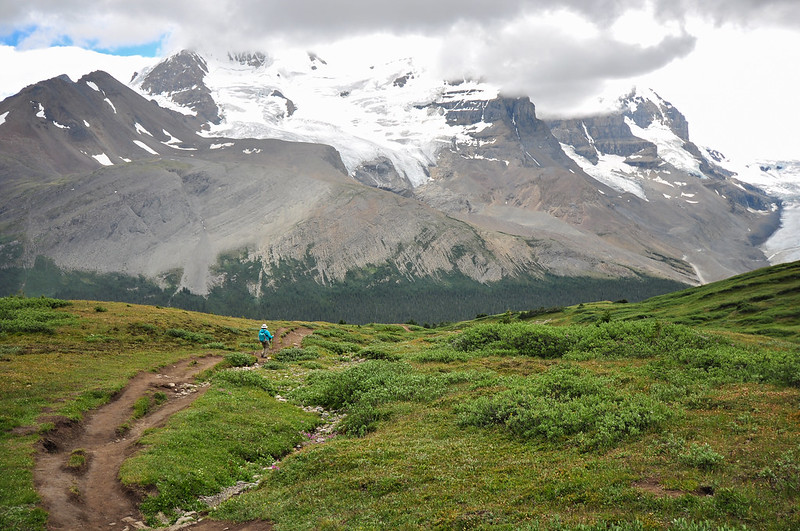 This was a good starting hike for our trip: six miles round-trip with 1300′ elevation gain! Although it was cloudy for the whole hike, it only sprinkled a few times.

Back at the campground we found sunny skies again. Such a relief to be free of the smoke! We weren’t free of mosquitoes, though. They weren’t terrible, but they were present. We had a nice view of Mt. Hector from our campsite: 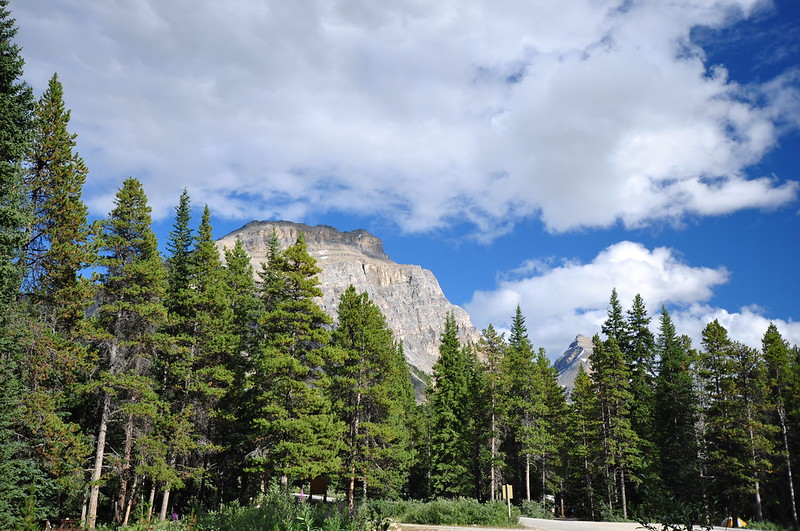 Mosquito Creek runs along the edge of the campground: 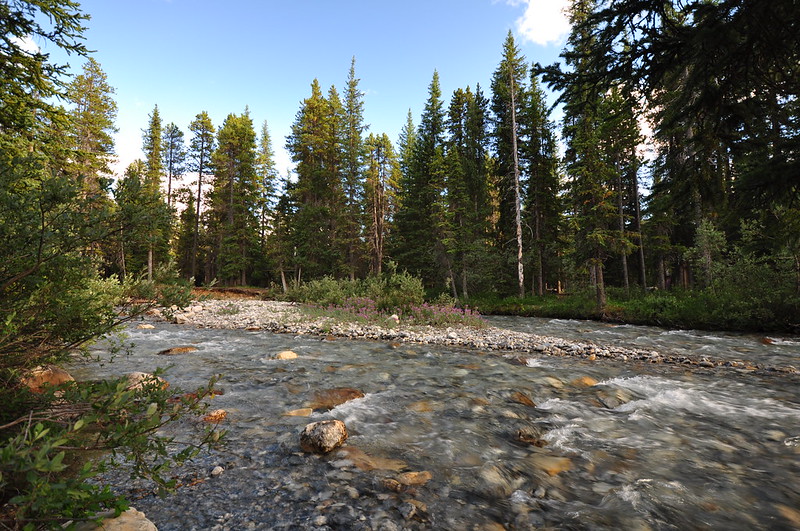