Months ago when we scheduled a trip to British Columbia for early August, we were coming out of a horrible wet cold winter with a lot of snow. Little did we realize that summer would be bone dry and that by early August BC would be burning up with over 100 wildfires. The day we were to leave we woke up in Portland to find hazy skies and the weather forecasters said it was smoke from the BC wildfires. Aw crap. The only good news is that extreme triple digit heat was in Portland’s immediate future and we were not going to be around for it, thank goodness.

We could not see Mt. Hood as we drove east on Interstate 84. The smoke was thick in the Gorge. 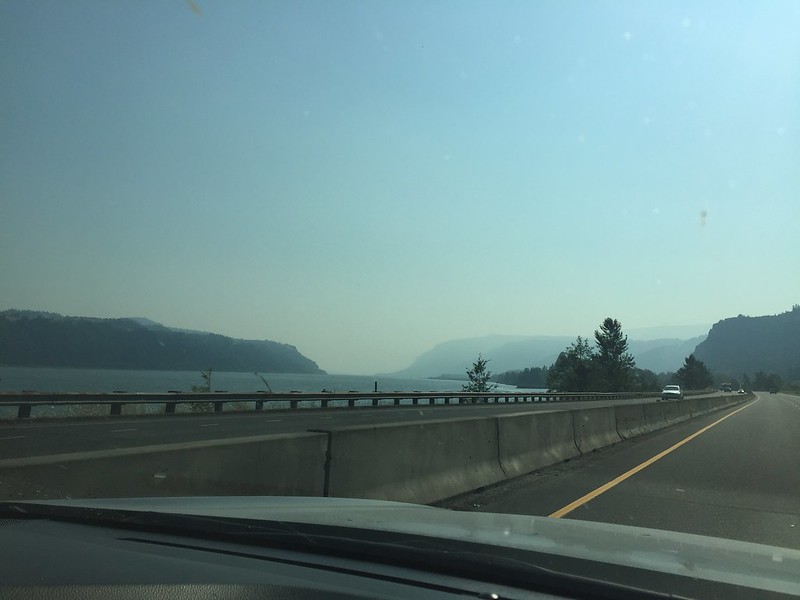 We drove 560 miles across Oregon, Washington, and BC and had smoke the entire way. It was a relief to reach Kaslo, BC and our smoke-free hotel room at the Kaslo Hotel and Pub (nice hotel, highly recommended): 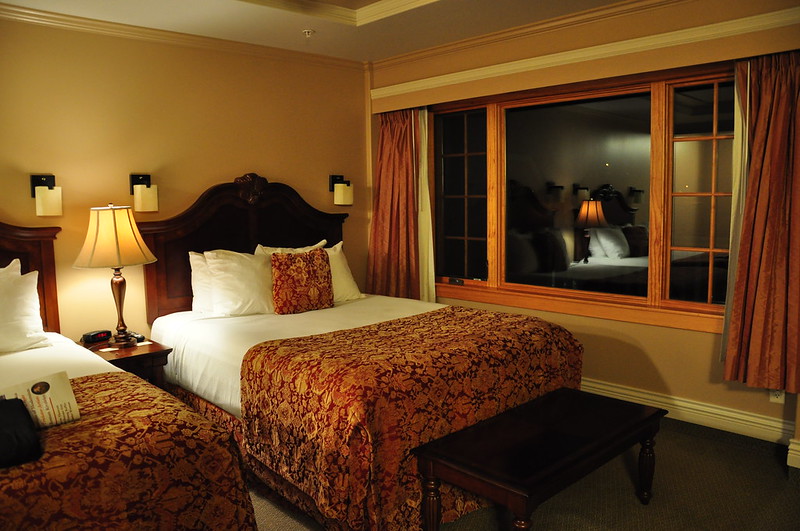 The situation had not improved in the morning. The smoke was bad: 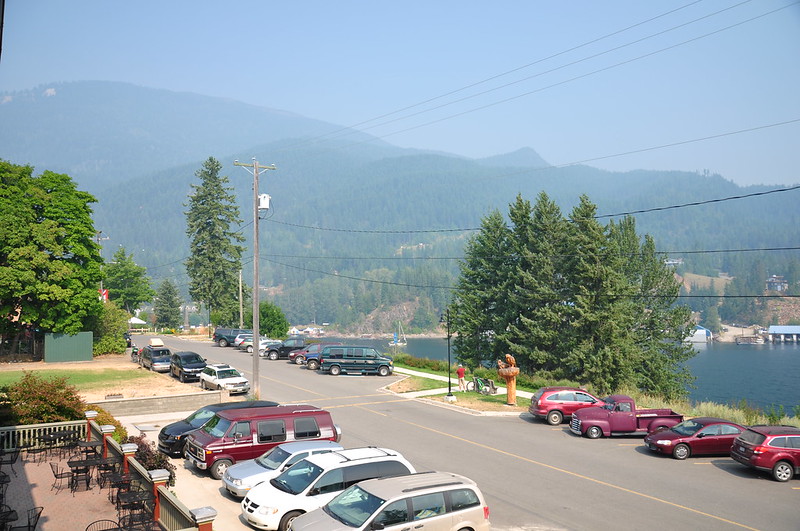 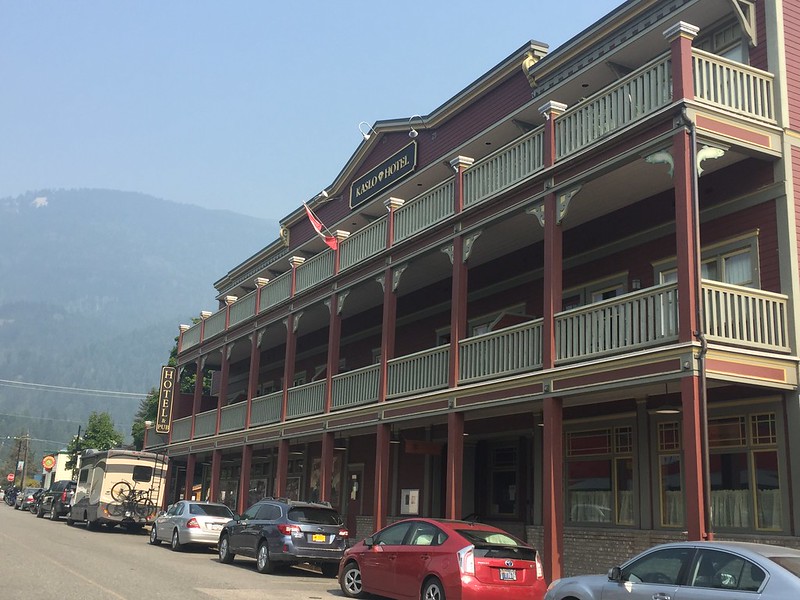 We could not even see across Kootenay Lake: 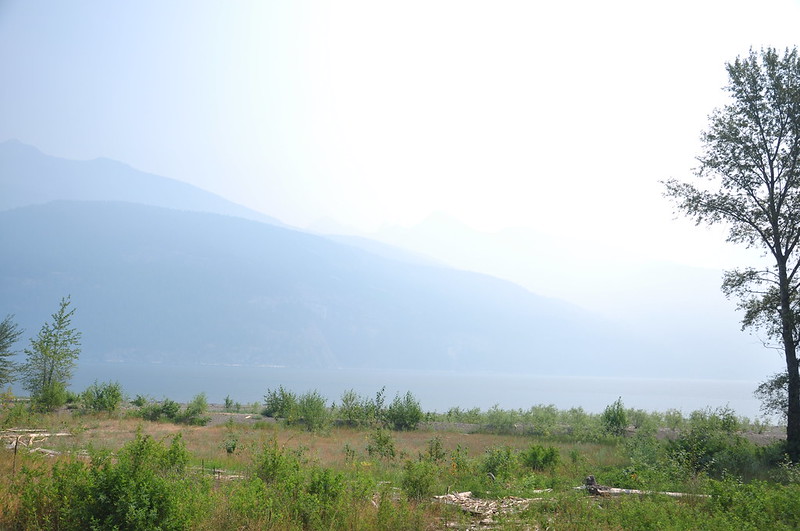 We decided we could not camp and hike in these conditions. We already knew we could not do the hikes we came here to do (Monica Meadows and Jumbo Pass) which became inaccessible due to wildfires a few days earlier. We had come up with other hikes to do, but these were terrible hiking conditions. We ditched the first part of our trip itinerary and decided to head up to Yoho National Park earlier than planned. We arrived at Galena Bay a tad too late and we JUST missed the 1:30 ferry. We had to wait an hour for the next one: 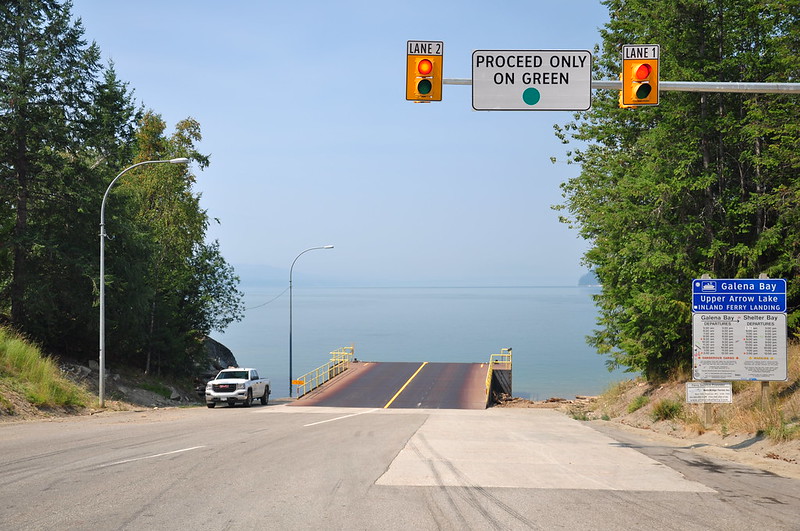 We got out of the car and stretched our legs while we waited. I’m sure Upper Arrow Lake is scenic and that we would have enjoyed good views on a clear day. Today was not that day: 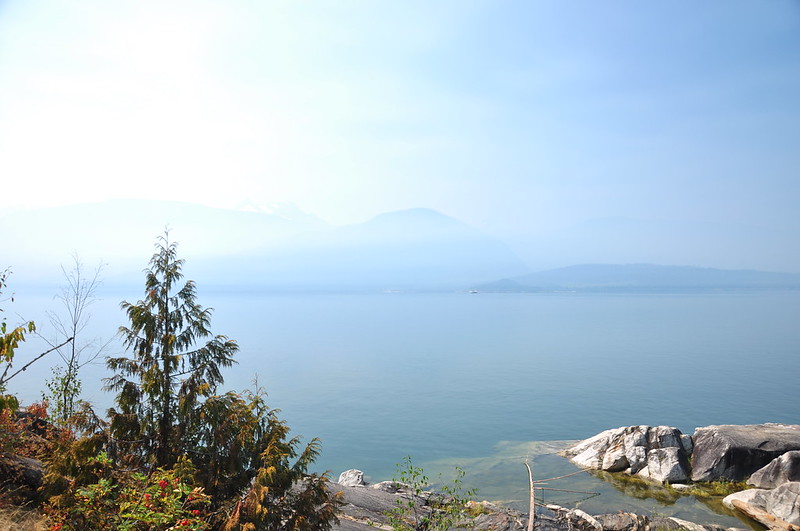 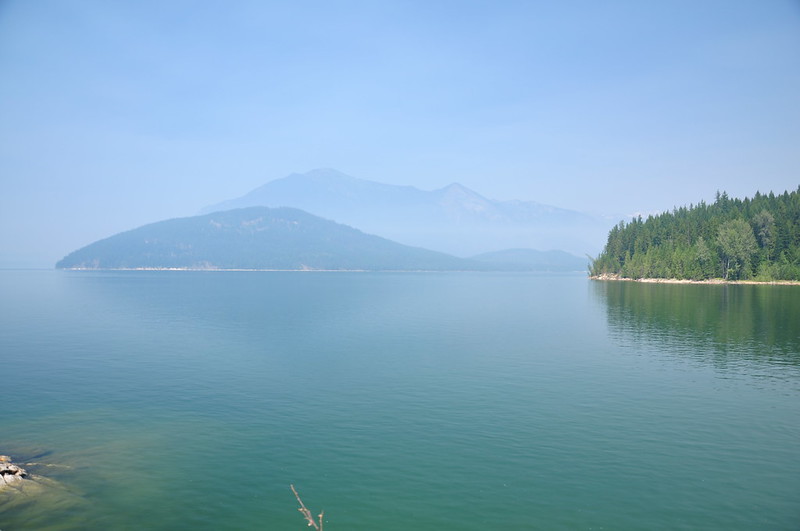 We could clearly see a wildfire above Galena Bay as we waited for the ferry. On August 4, the next day, this fire would flare up; an evacuation alert would be issued the day after that. 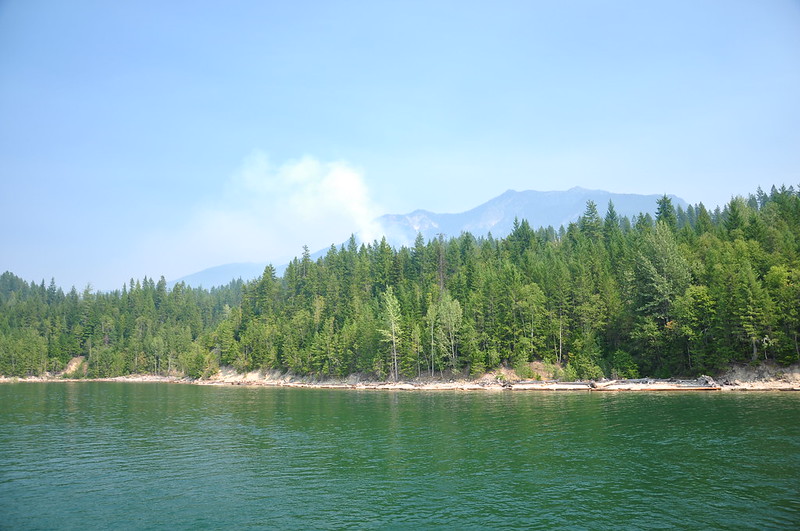 Once the ferry pulled away we could see that fire more clearly: 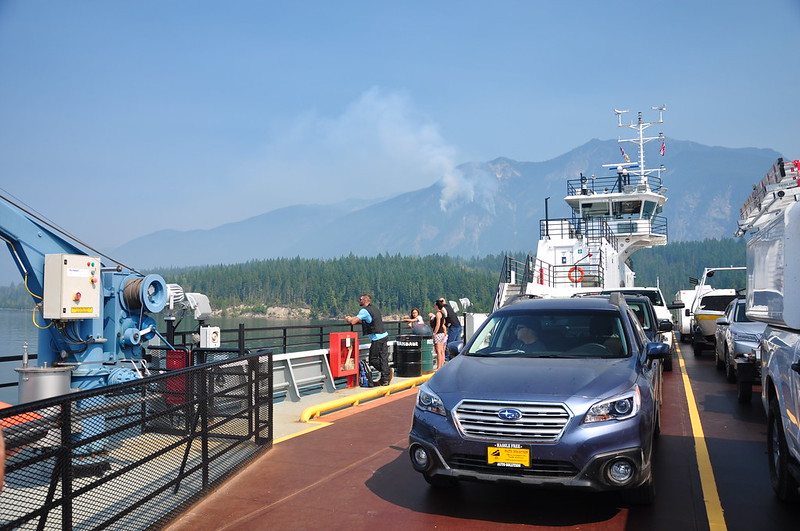 Smoky view from the ferry: 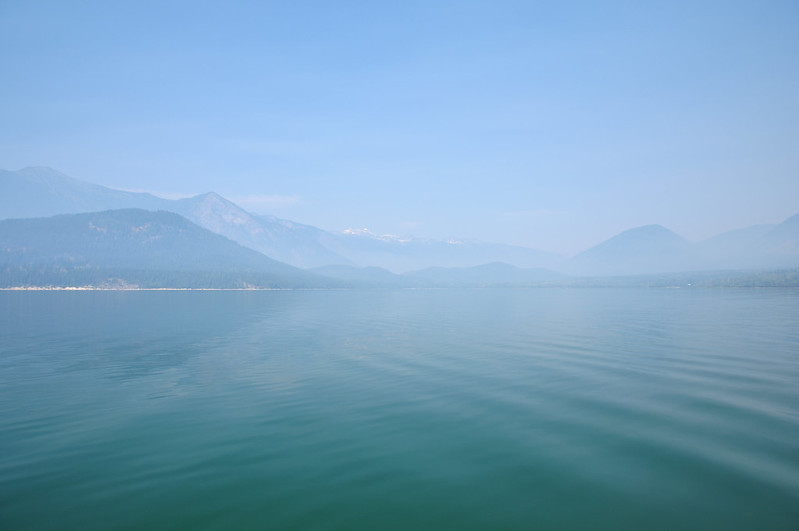 We kept driving, always through smoke. When we got to Glacier National Park the smoke got worse since there are several active fires in the park. We could actually see some of the fires on the slopes above us. The haze obscured the mountains: 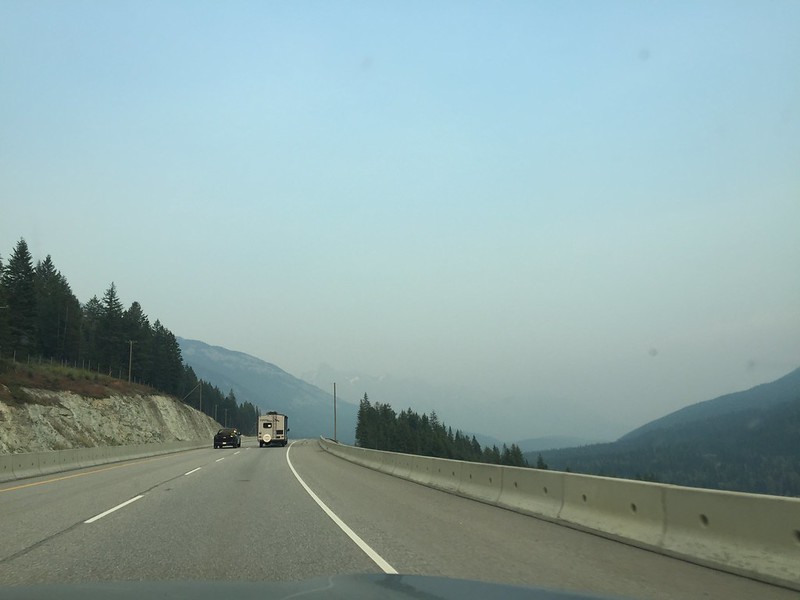 Yoho National Park only has two campgrounds – Monarch and Kicking Horse. They were both full. Ack, now what! We eventually ended up at the Herbert Lake picnic area in Banff National Park. No camping is allowed there, but it was getting late and we were out of options. Sorry Parks Canada! We were desperate! 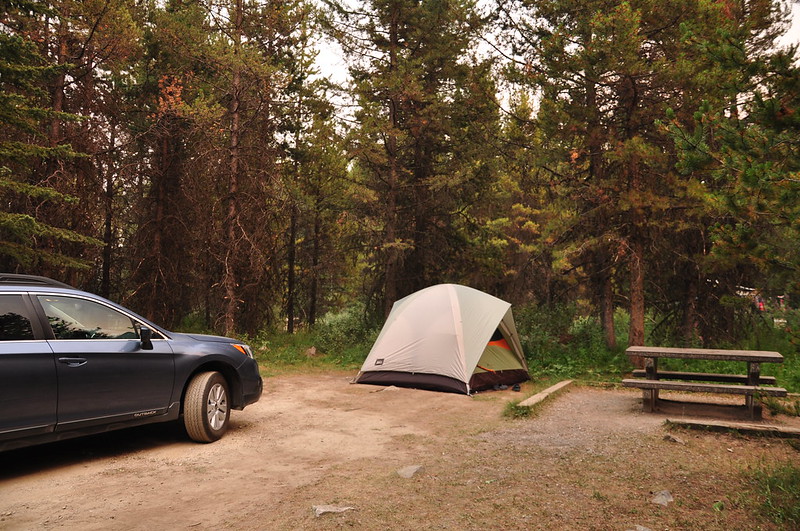 We talked about what kind of backup plan we might be able to come up with, but there were fires everywhere. It seemed there was no escaping the smoke. I went to bed feeling extremely discouraged and I had no idea what we should do. I had spent a considerable amount of time planning this trip. The thought of throwing out the plan and starting over was exhausting and discouraging.