We fell asleep last night to the sound of crickets and an owl. So awesome! The stars were also amazing: 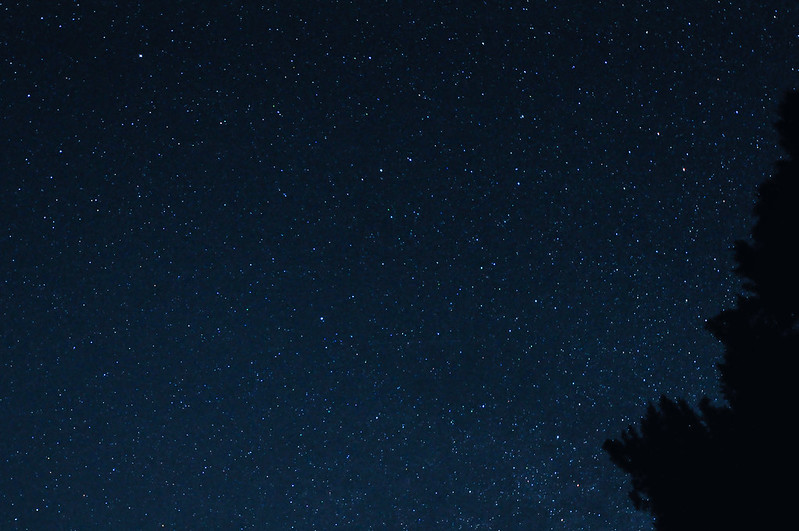 On the advice of our campground neighbors, Wednesday morning we drove up the Kleinschmidt Grade. This road on the Idaho side of the canyon has been around for quite awhile. It was built by entrepreneur Albert Kleinschmidt in the 1880s so he could haul copper and gold from the Seven Devils area to the Snake River. That venture didn’t pan out, but the road still exists. It’s steep and narrow in places, but it’s in good shape and is doable in a passenger car. We stopped at this lovely pullout part of the way up. The landscape and vegetation changes pretty quickly as you climb up and away from the canyon: 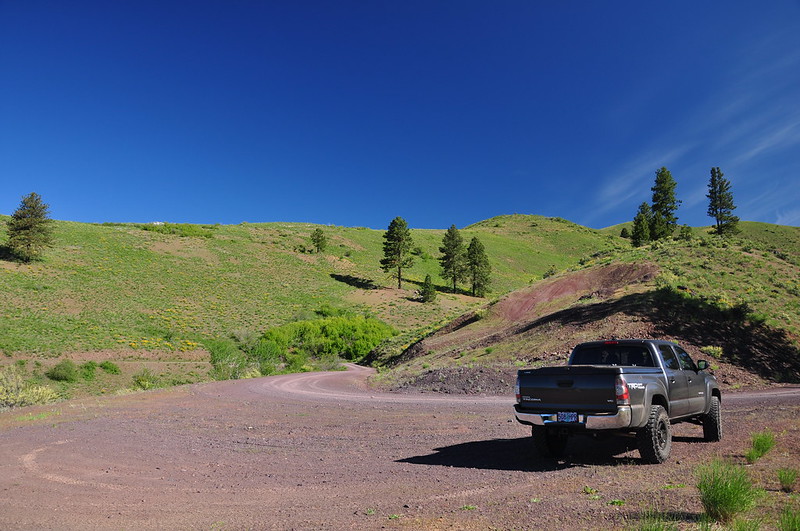 Before driving up to the Lynes communication tower we checked out the little community of Cuprum, which seemed to mostly consist of vacation cabins and a handful of year-round residences. According to Donald C. Miller’s 1976 book Ghost Towns of Idaho, “Cuprum was in the Seven Devils Mining District, about twenty-eight miles northwest of Council, located among still reportedly immense, untapped copper deposits. The town still exists, but as a logging and summer cabin settlement, rather than as a mining town.” 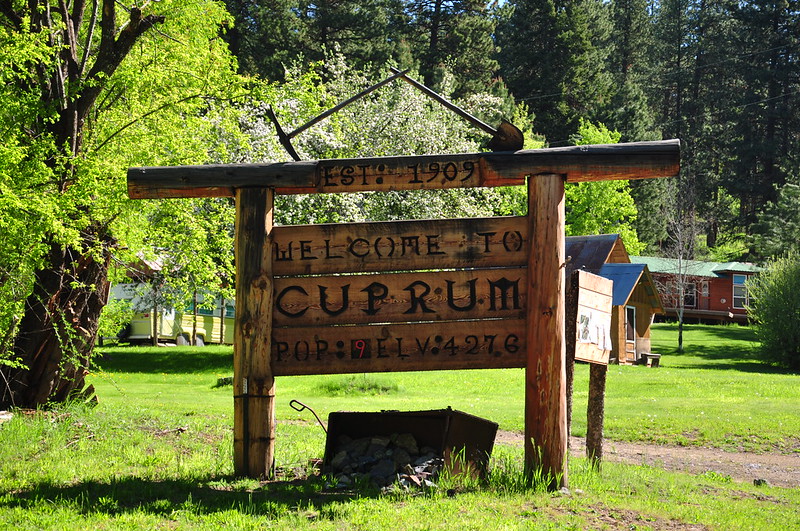 Then we drove up the road to the communication tower. This two-mile stretch was pretty rough and rutted. The Outback probably could have made it, but I was glad we had the truck. It was DEFINITELY worth the drive up, because the 360 degree views were spectacular!

Some of Idaho’s mountains to the southeast: 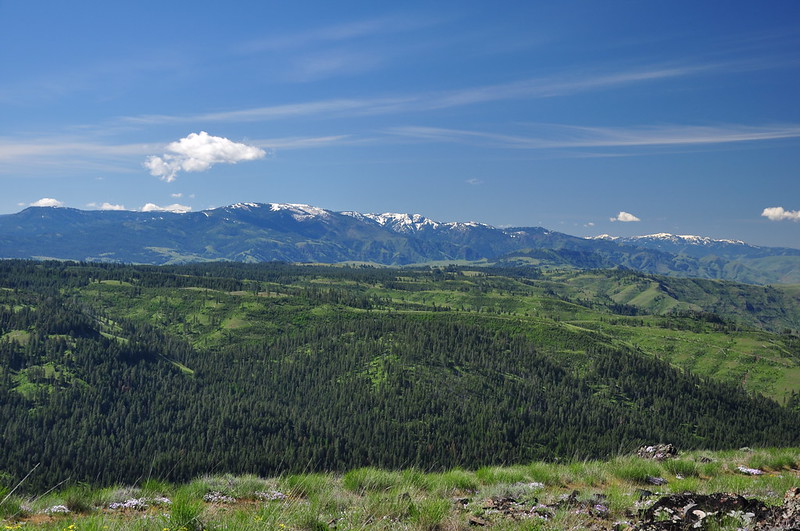 The communication tower (we had a great phone signal up here): 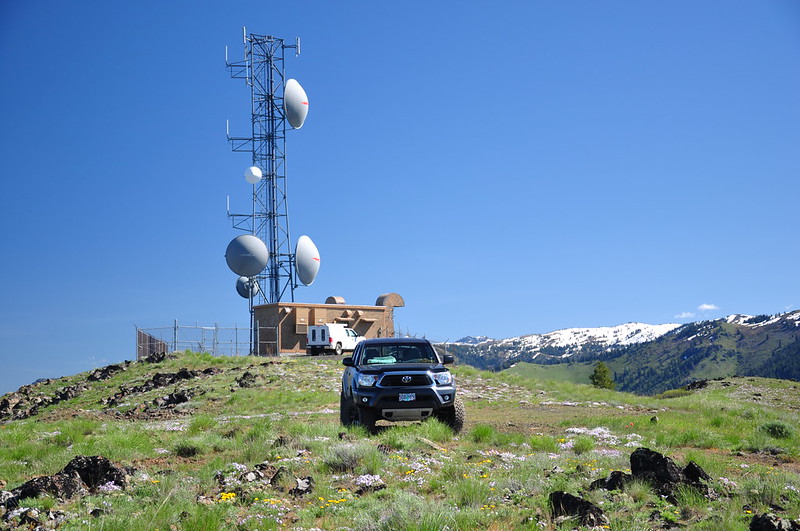 The Wallowa Mountains to the west: 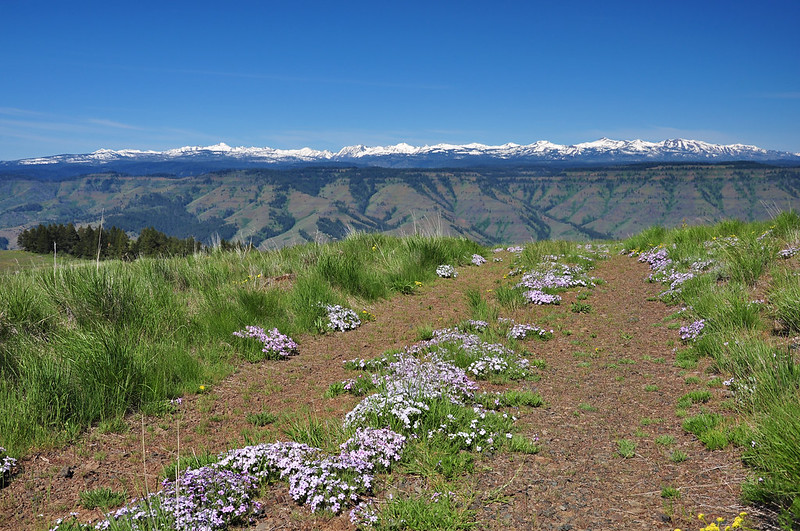 Looking south down into the canyon: 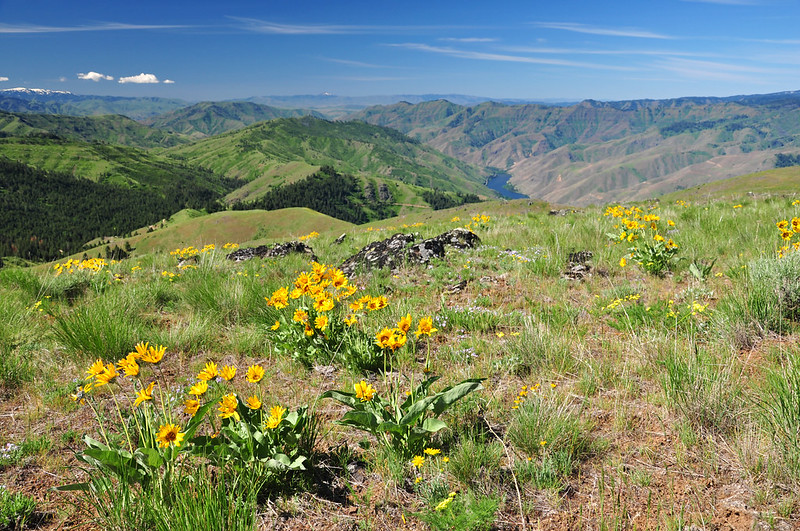 Mountains directly to our north: 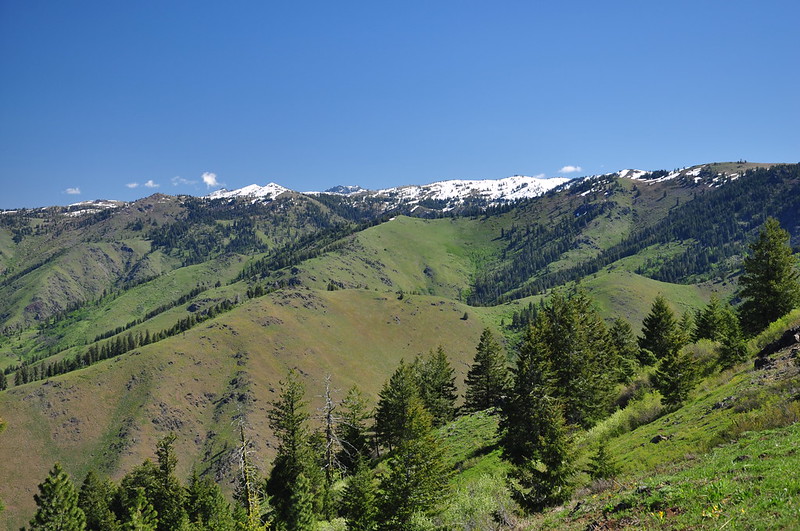 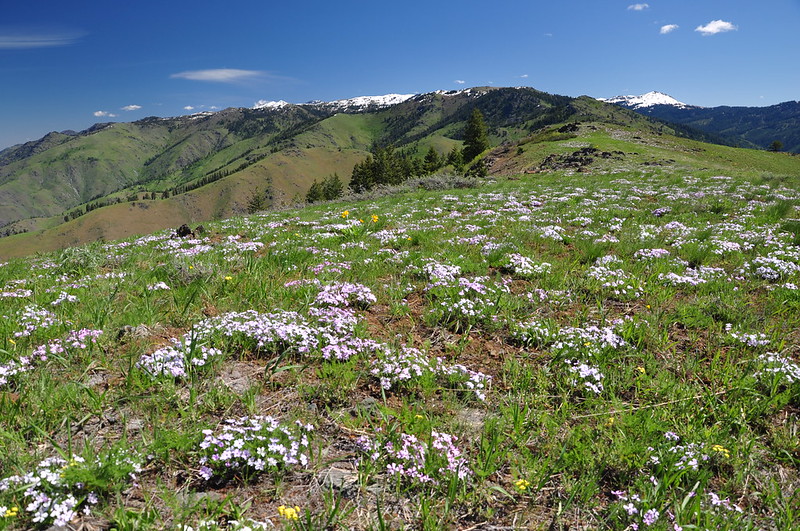 We could just make out the lookout on nearby Horse Mountain: 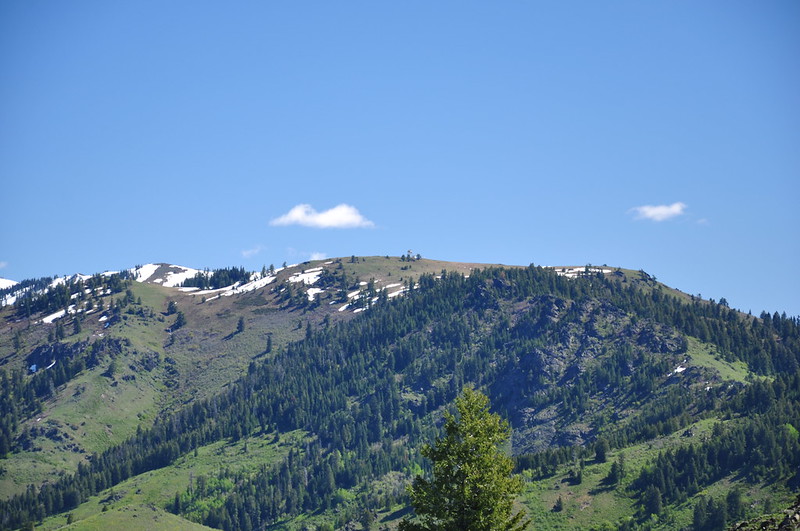 Looking back at the road we drove to the summit: 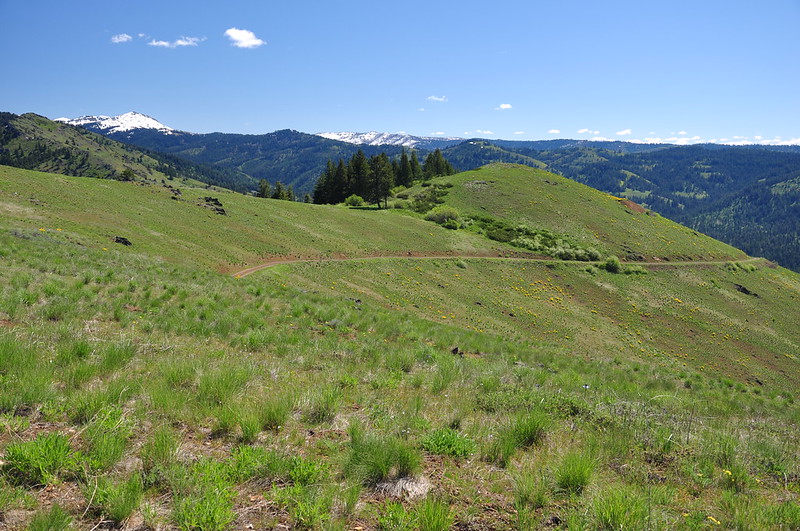 We soaked up the views, looked at things through the binoculars, identified mountains with the PeakFinder app, and generally just enjoyed the scenery. It was beautiful and sunny with only a bit of a breeze. After hanging out up there for awhile we headed back down. I shot this picture of the river on the way down, which shows the green Idaho side and the less-green Oregon side: 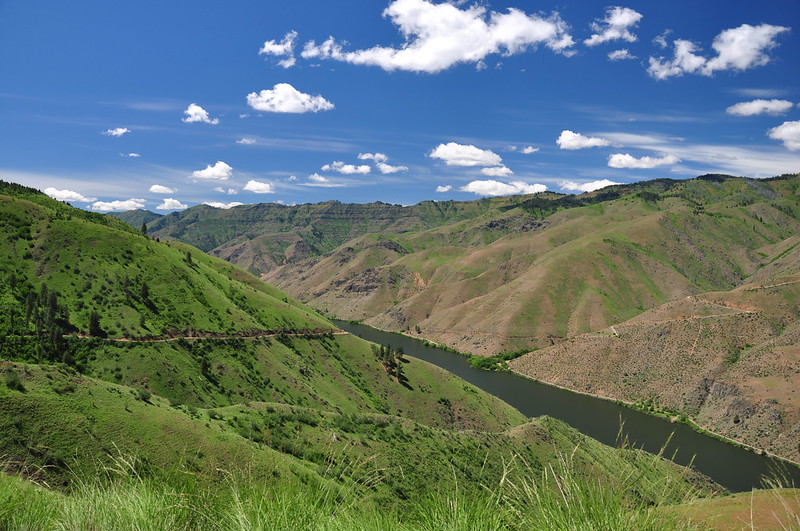 Looking down on our campground from the road above: 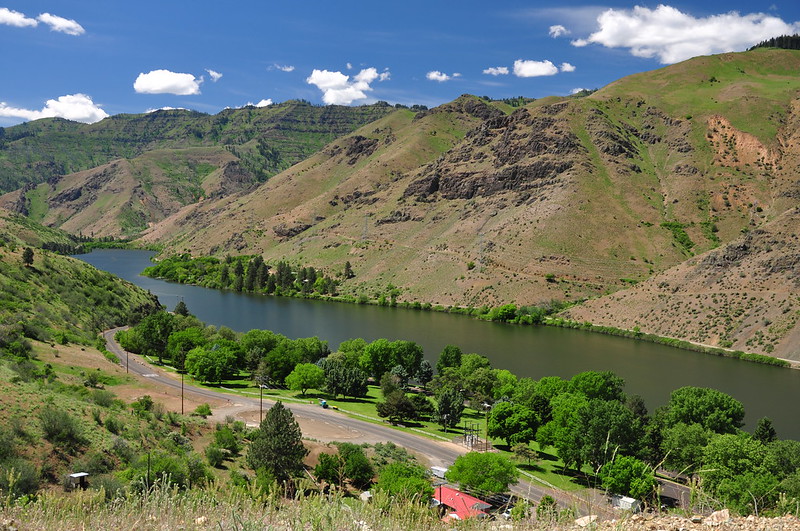 After a bite to eat at our campsite, we drove up the riverside road to the Hells Canyon Dam. It’s actually quite a scenic drive this time of year! Once we reached the dam we drove across it to the Oregon side and parked at the visitor center. 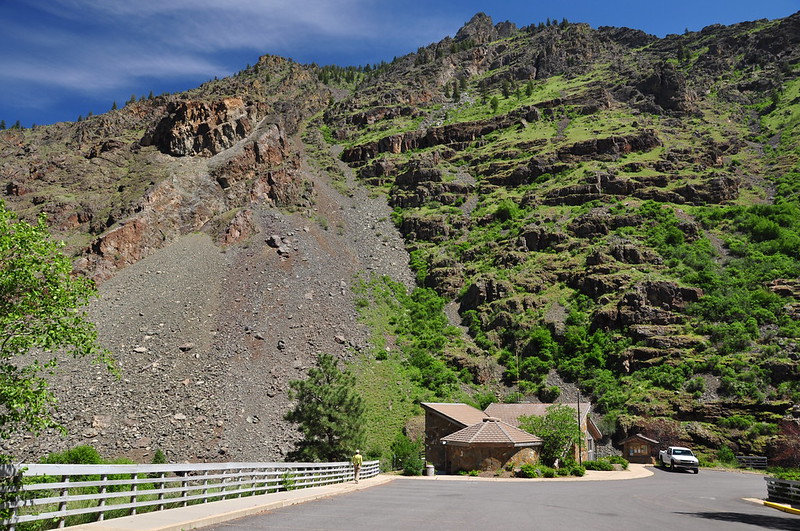 Idaho Power operates this dam along with Brownlee Dam and Oxbow Dam. The original dam proposal was for one 710-foot-high dam with a reservoir that would have extended 89 miles upstream. But that plan was abandoned and the three smaller dams were built instead. The dams were built without fish passages. According to the Native Fish Society, “The Snake River was once one of the most important rivers for the spawning of anadromous fish-—which are born in the headwaters of rivers, live in the ocean for most of their lives, and return to the river to spawn-—in the United States. The river supported species including chinook salmon, coho salmon, and sockeye salmon, as well as steelhead, white sturgeon, and Pacific lamprey. It is known that before the construction of dams on the river, there were three major chinook salmon runs in the Snake River; in the spring, summer and fall, totaling about 120,000 fish, and the sockeye salmon run was about 150,000. The historical barrier to fish migration on the Snake River was Shoshone Falls, a waterfall that occurs as the Snake River passes through the Snake River Plain.”

At a picnic shelter near the visitor center I heard squeaking. I looked up and there were a bunch of bats roosting up there. Cool! 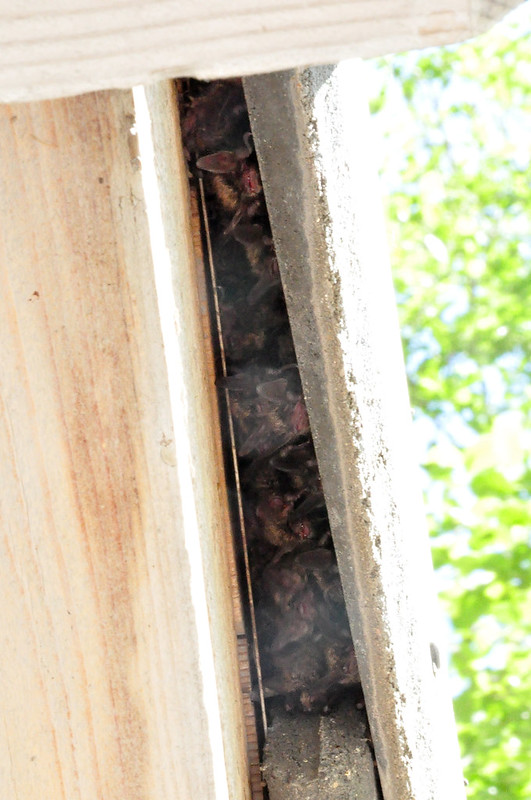 There is a mile-long riverside trail on the Oregon side and we meandered down that way: 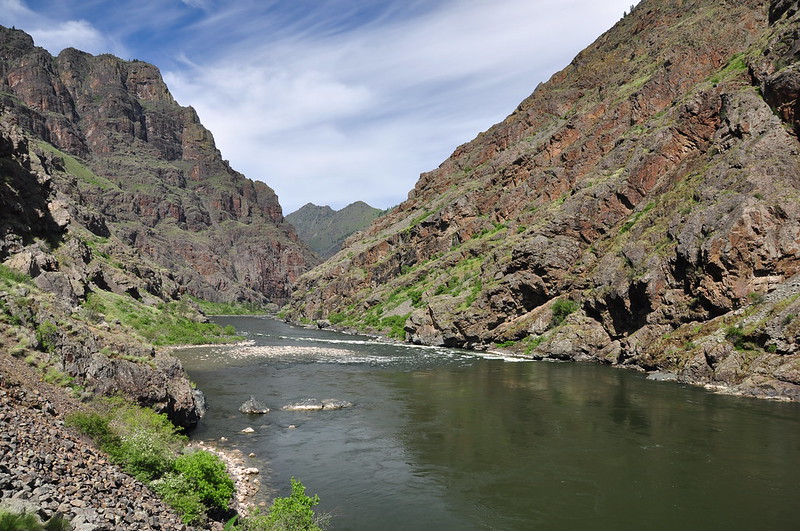 This jumble of rocks is known as Rush Creek Rapids, the remains of an enormous 400-foot-high landslide 10-15 thousand years ago. Wow! 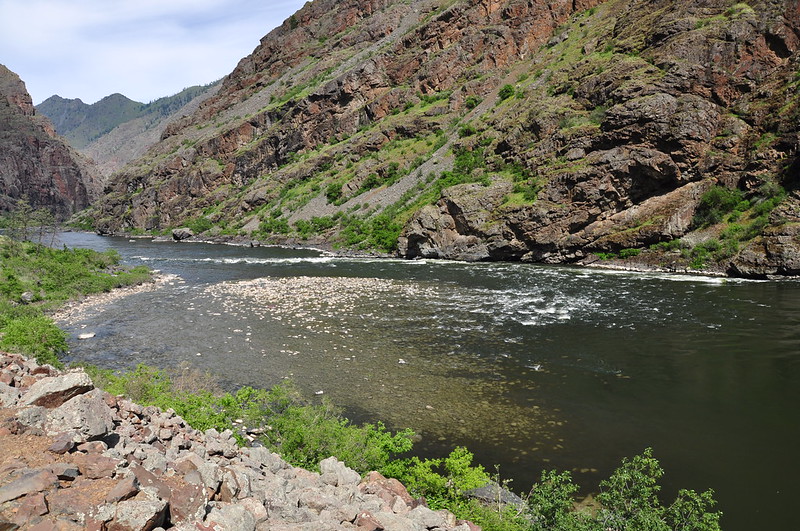 Looking back at the dam: 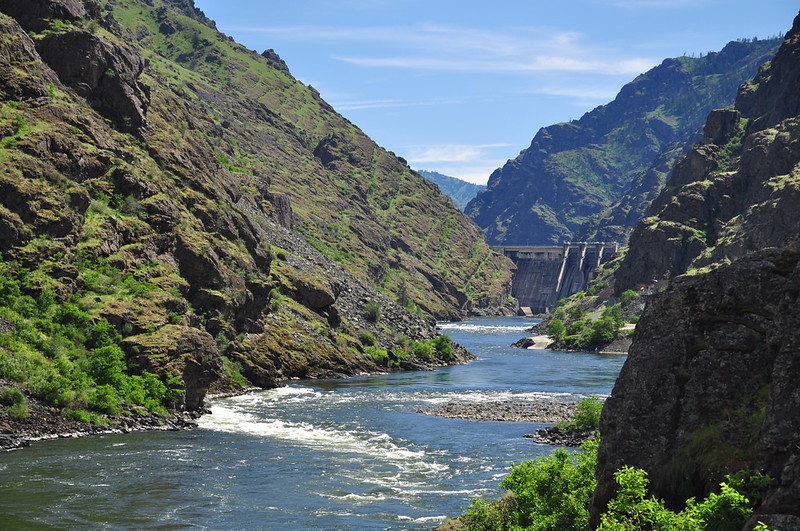 I think we encountered more poison ivy on this hike than all our other hikes this trip: 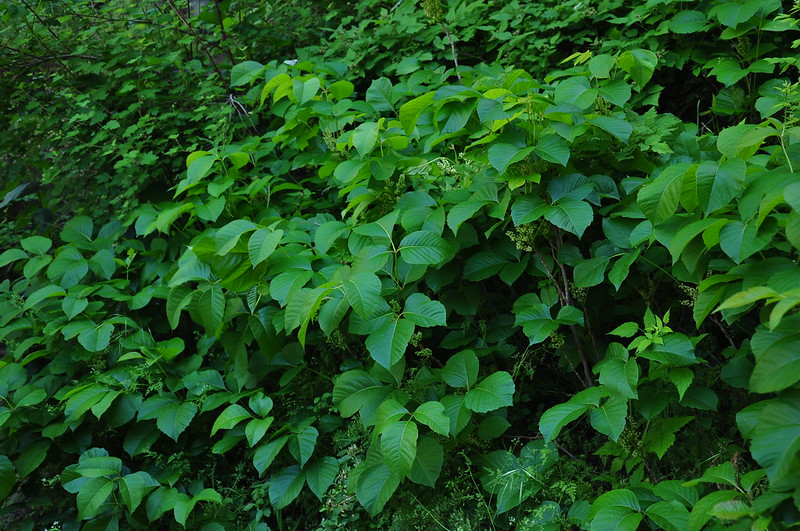 It was pretty cool to see the Snake River as a river and not a reservoir. We stopped at a big flat rock with a fine view and stayed to soak up the view for awhile. It was incredibly beautiful! 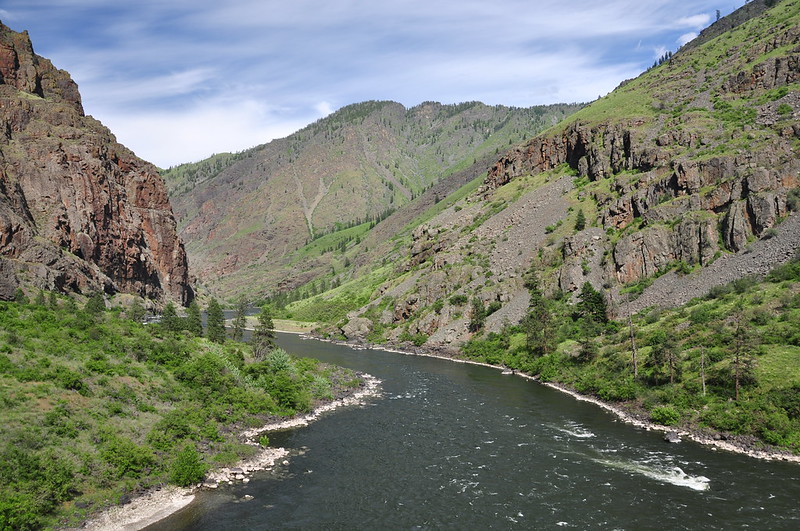 We hiked back to the truck and drove back across the dam to the Idaho side. On that side is the Deep Creek Stairway, which was built in 1989 to provide safe river access for Idaho anglers. 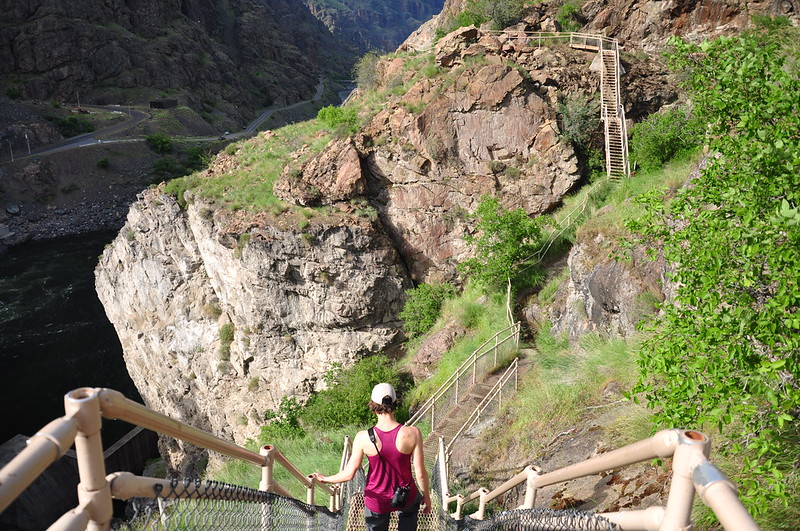 It’s a crazy stairway, going up, over, and around the rocky cliff face. I hoped it had passed inspection in the recent past: 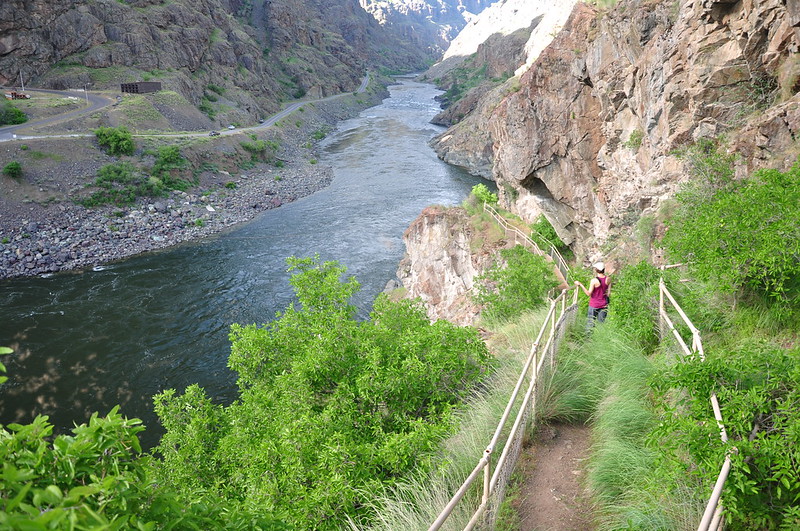 At a muddy spot on the trail we saw a bunch of butterflies: 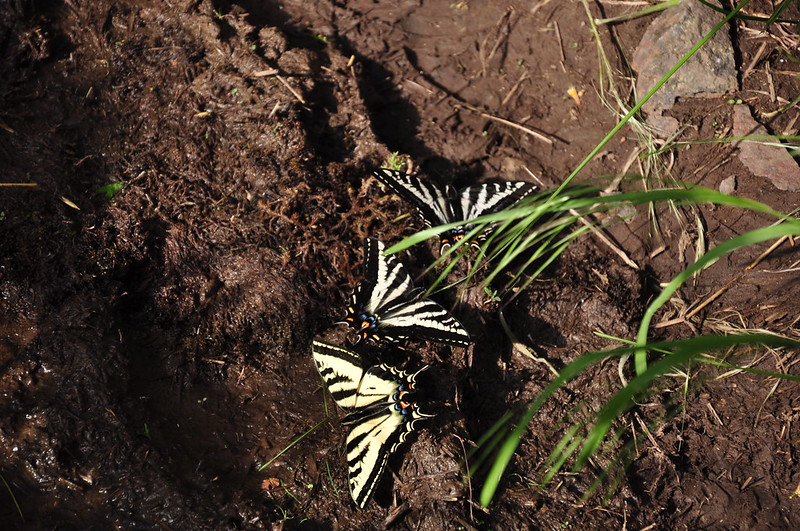 And here’s the view of the 330-foot dam from below: 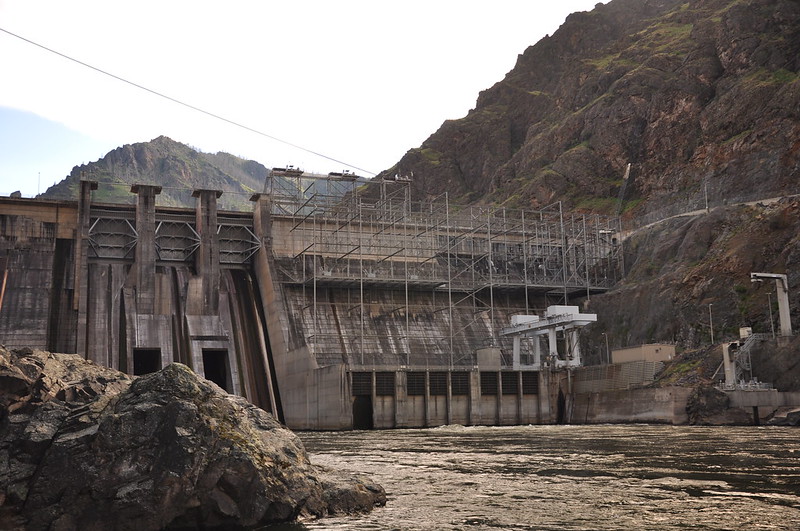 We made the scenic drive back to the campground where we enjoyed a calm windless evening. All we could hear were the birds and crickets. It was so peaceful. New neighbors arrived at about 8:15. It looked like they were grandparents with their young grandkids. They had this massive old-fashioned canvas tent that must have been hell to put up. But at least they were quiet neighbors.