I’ve been wanting to head up to Bonney Butte in the fall for several years now, so I decided to go on Saturday. There was no way I was going to tackle the miserable access roads that get you to the foot of the butte. My Outback could have handled it, but it would have been a VERY slow and jarring drive and I’d rather spend that time on the trail. So I parked on Road 48 and hiked up Bonney Meadows Trail #471.

The hike up is totally uninteresting. The only thing worth noting is that right around the spot when I was below the end of Road 250 I smelled exhaust fumes. It was overpowering and nauseating and lasted for about five minutes worth of hiking. I don’t know who was up at the end of that road or what they were doing, but the fumes were BAD (and I don’t even have a very good sense of smell!)

The trail pops out on Road 4891. I turned left and walked down the road for about half a mile. It is indeed as awful as I’d heard, with rocky ruts and large boulders. I turned and walked up gated Road 130, the spur that gets you to the summit. 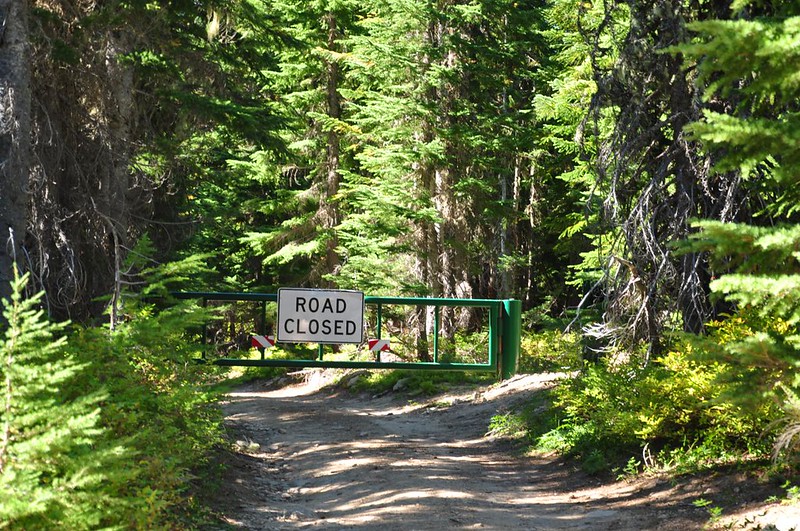 The Forest Service has built a nice vault toilet off to the side. 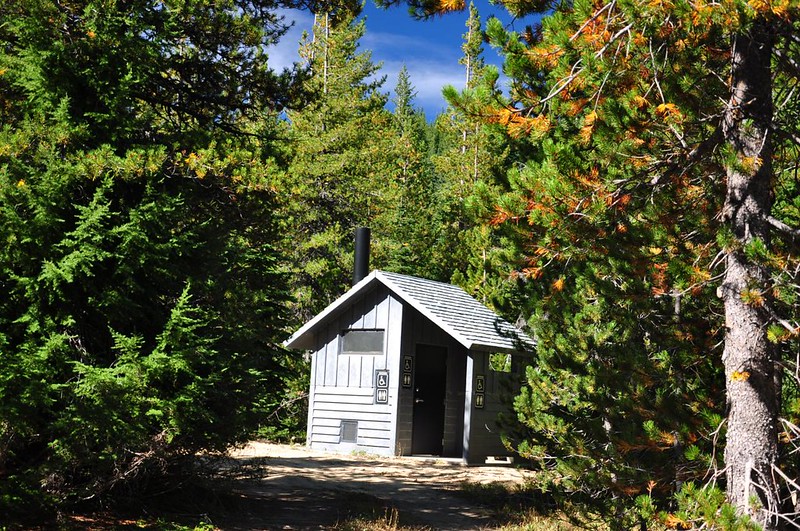 It was crazy windy at the top. I met several staffers from Hawkwatch International. They are up here August 27 through October 31 every year, counting hawks and banding birds. You can read more about what they do here It’s pretty cool!

There weren’t so many birds around that day because of the wind. But the views were still pretty nice. Looking down on the White River: 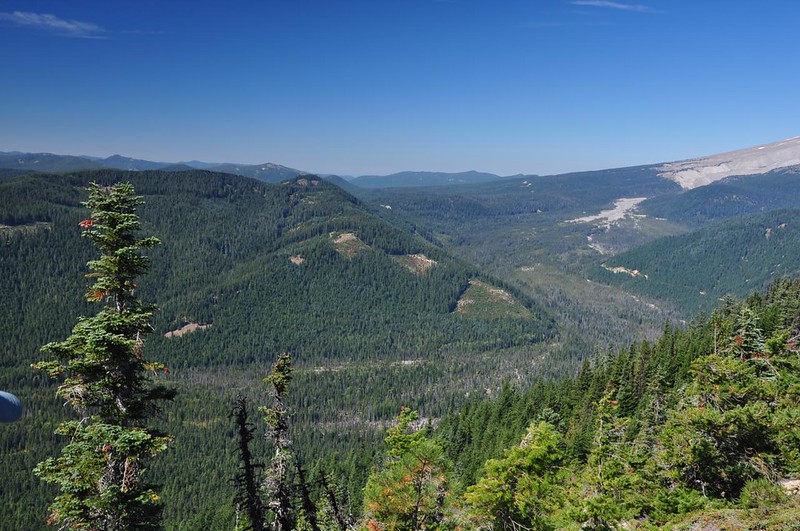 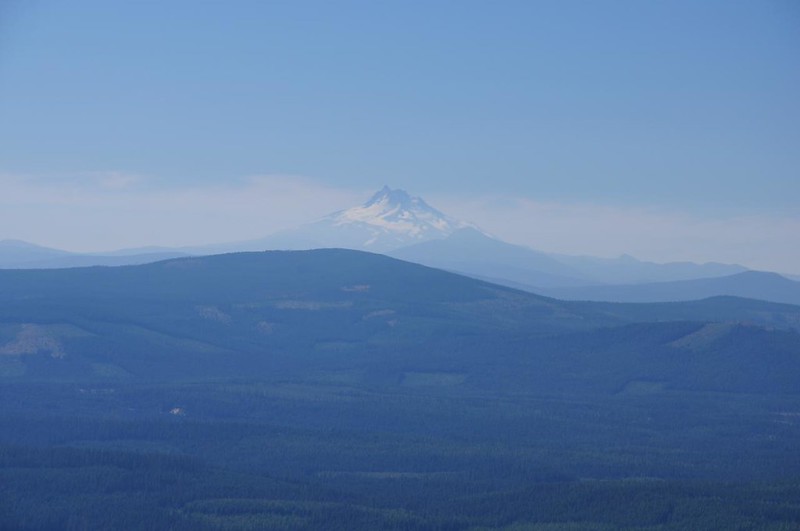 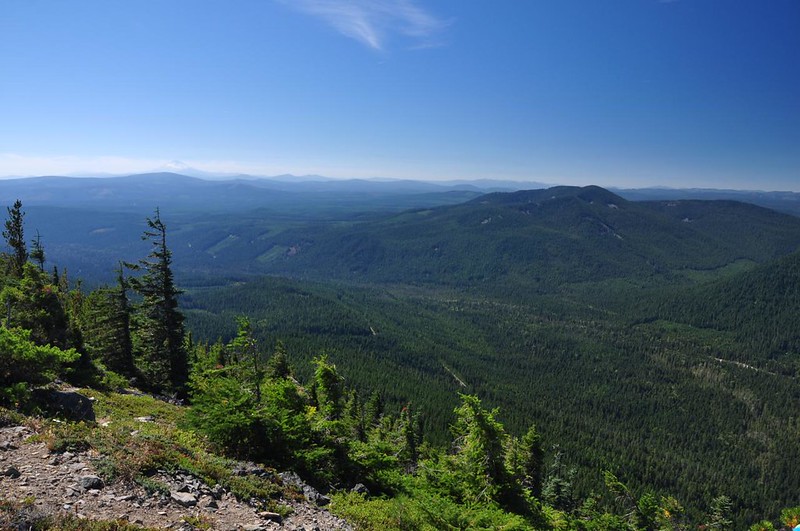 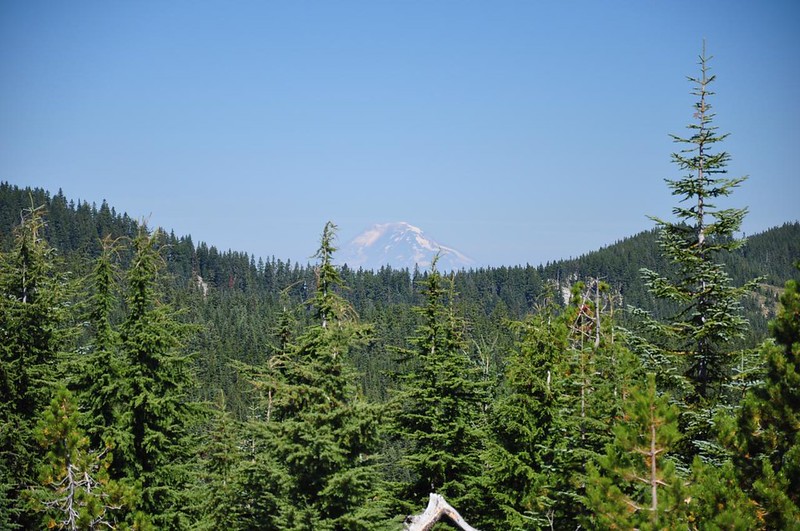 Badger Butte on the left. Not sure, but maybe the hump on the right is Flag Point: 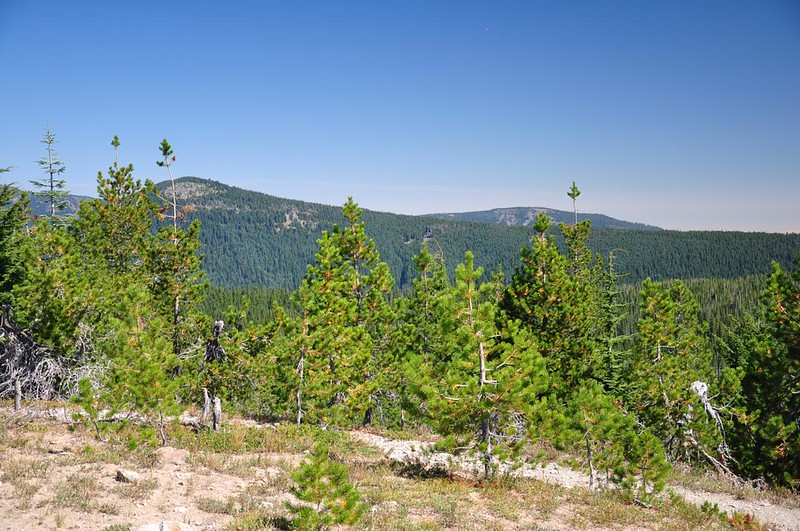 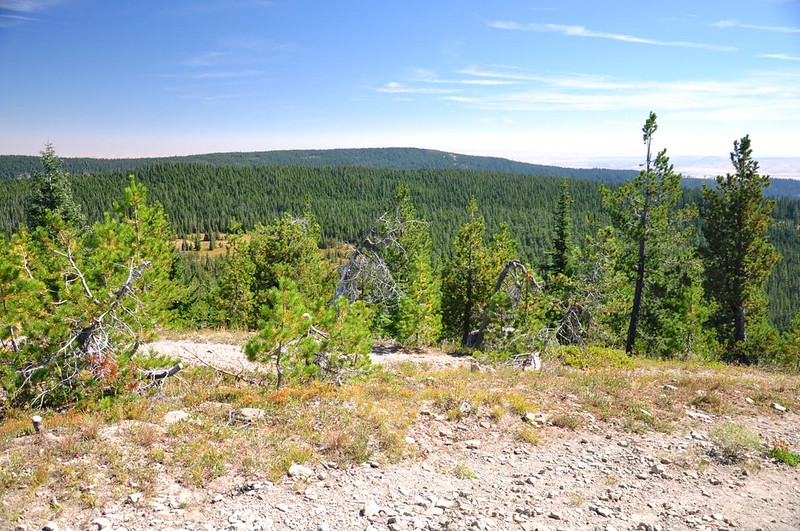 Looking down on Bonney Meadows:

More hikers arrived and one of them had a 10-week-old puppy with her. Cute! I’m a total sucker for puppies. This little gal was named Juniper and she flopped down on her back between my feet and chewed at my boot laces while I rubbed her tummy. It was pretty freakin’ adorable. 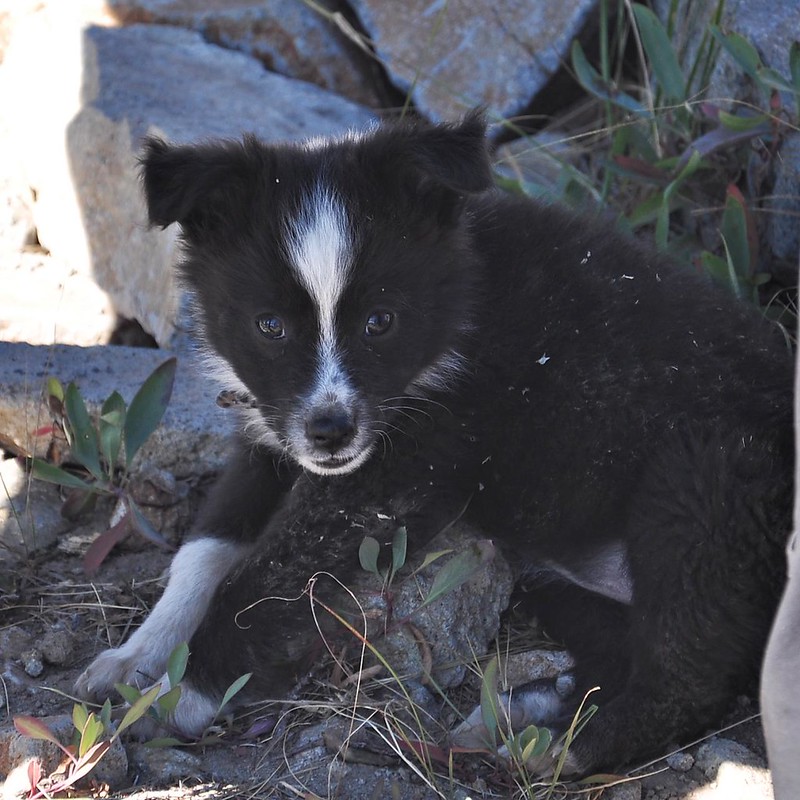 And of course lovely Mt. Hood (and the not-so-lovely scar of Mt. Hood Meadows): 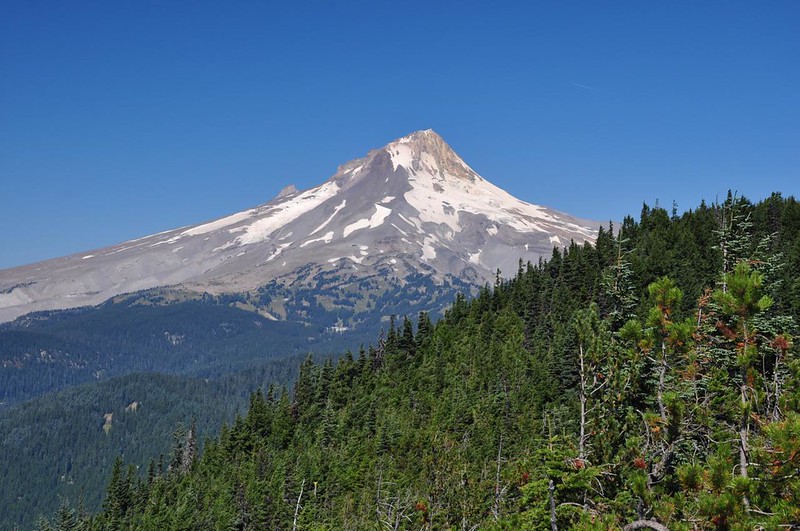 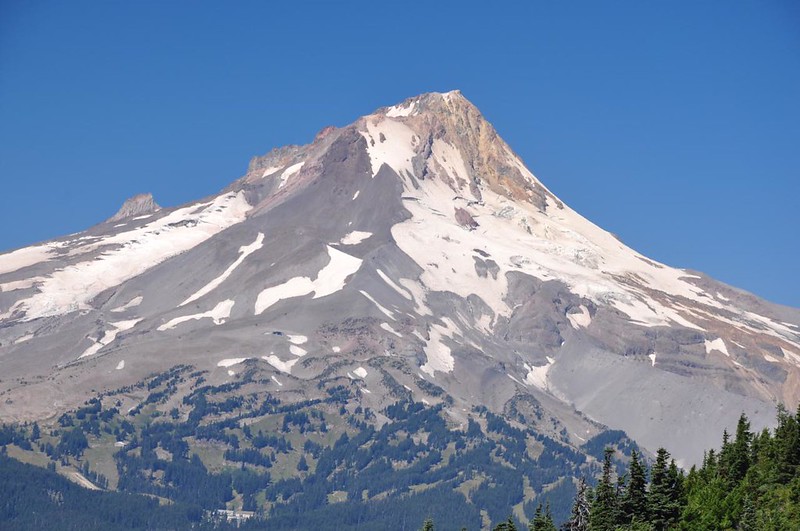 There used to be a lookout up here, but like so many others it was deliberately burned down in the 1960s. After enjoying the summit for awhile I headed back down. On my return route I popped over to check out the tiny Bonney Meadows Campground. This is the not the first time I’ve seen a place name spelled incorrectly on a Forest Service sign. 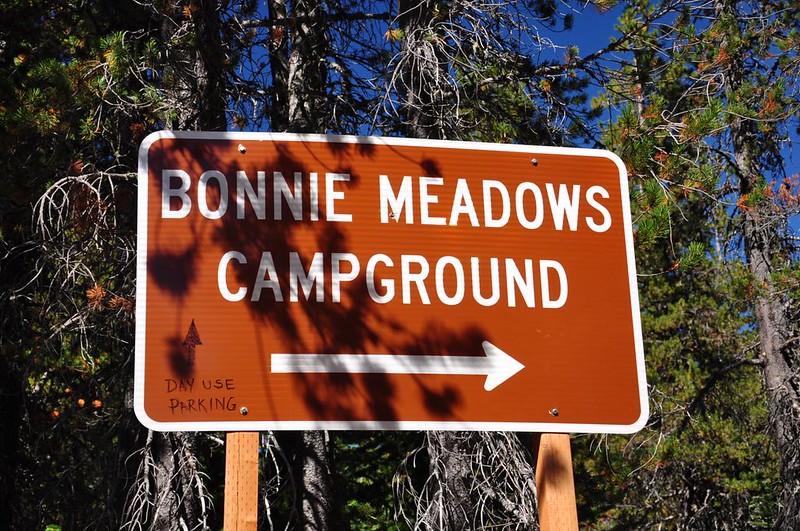 A few hundred feet down the road is the correct spelling: 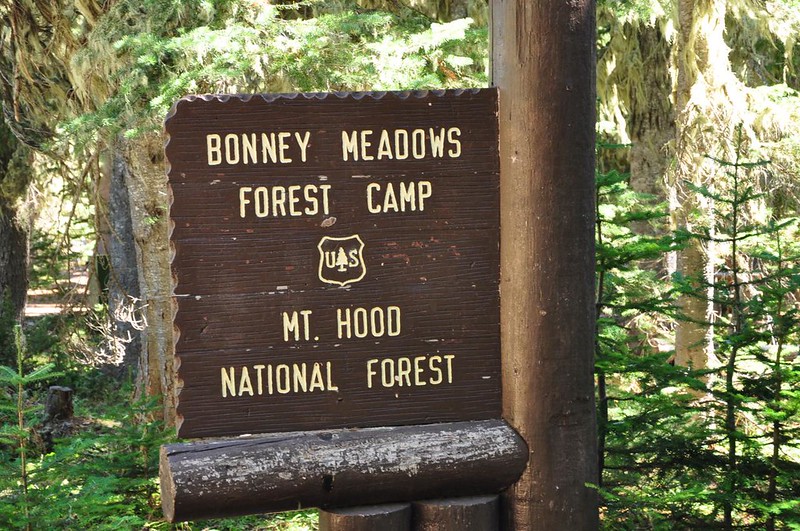 Most of the sites were taken (much to my surprise, considering the horrible road). I even saw a low-clearance sedan in one site! Brave soul. The USGS map shows Trail 472 and Trail 473 heading out from the south side of the campground. I wanted to pick up 472 which would connect me with 471 and take me back down to my car. But I couldn’t for the life of me find either of these trails, so I just set off cross-country across the dead meadow. This was an incredibly un-fun off-trail trek through leg-scratching grass (should have zipped the pant legs back on) and boggy areas. On the other side I crashed around in the trees until I found 471. In retrospect I should have just gone back to the road and picked up 471 there. 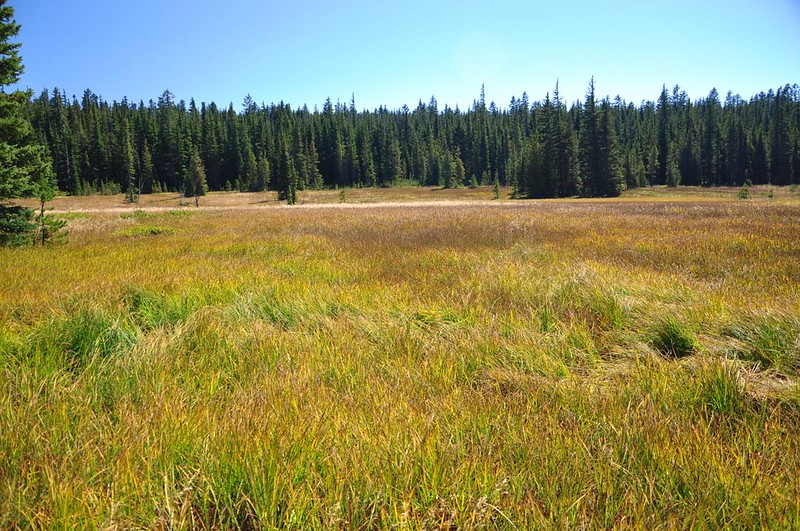 An hour later I was back at the car and heading home. Next time I go up to Bonney Butte I’ll start at the Boulder Lake Trailhead. Although it’s more driving, it would be a far more interesting hike.