Greg and I spent the weekend hanging around Olallie Lake. I drove out Friday night after work and grabbed a spot at Paul Dennis Campground, setting up the tent in the dark in VERY windy conditions. I didn’t stake it down well enough and a strong gust of wind sent it cartwheeling, even though I had my sleeping bag and other things inside. I had to stop cooking dinner to grab the tent and stake it back down.

Despite the strong wind I set up the tripod for some shots of the night sky. A full moon meant that the stars weren’t as bright or as numerous, but it was still pretty nice. 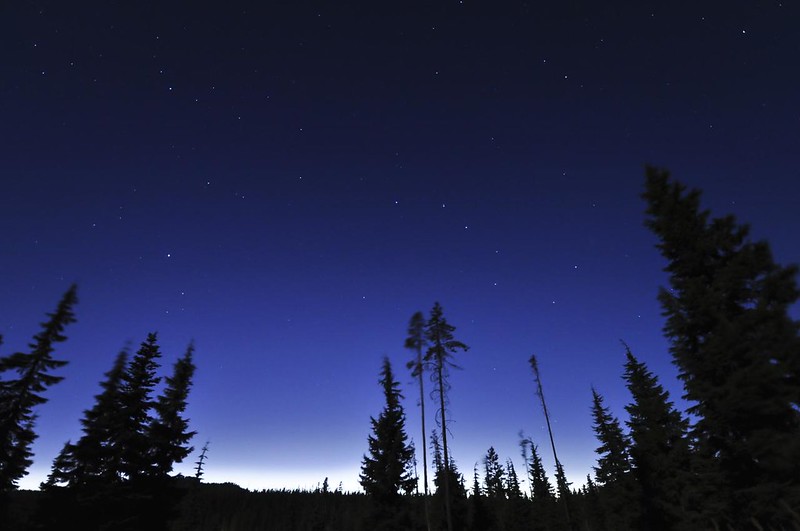 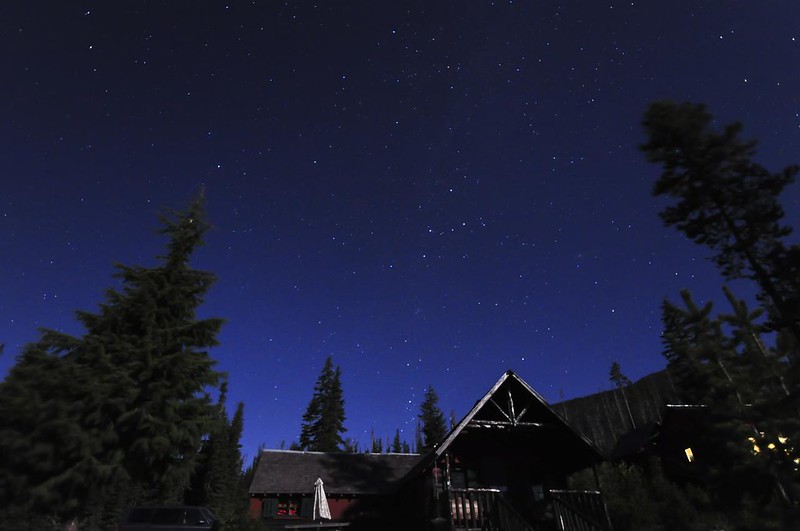 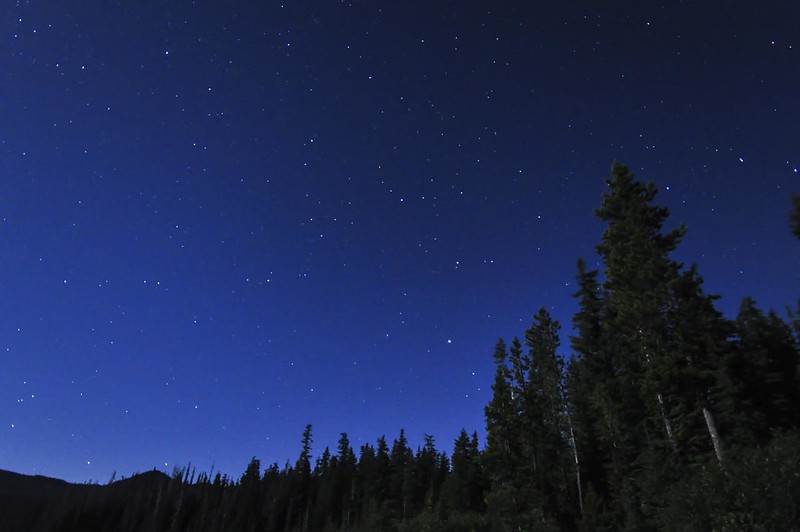 Greg joined me on Saturday and we headed up to the Sisi Butte Lookout. There is no trail to the summit, but there is a road. The road is gated at the bottom to keep out the vandals (which only works some of the time, I’m afraid). 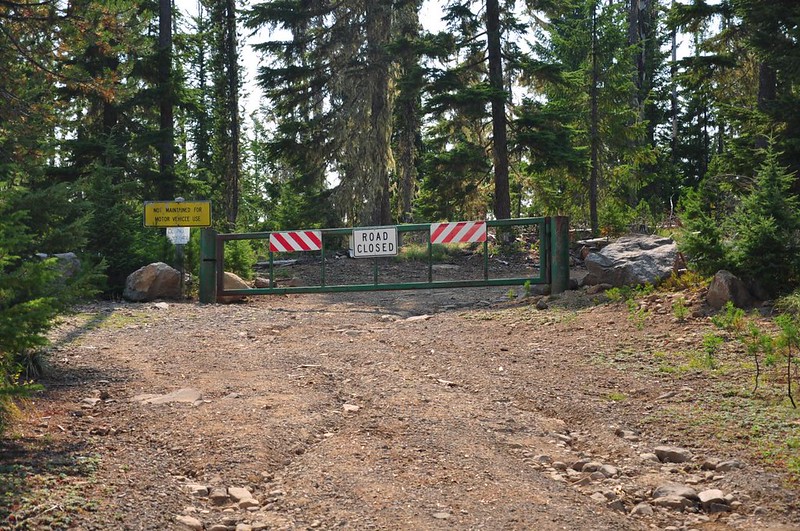 It’s 2.8 miles and 1,400 feet of elevation gain on this road hike, which is fortunately mostly shady. The road is in terrible shape (as are most lookout access roads, in my experience). It is very rough and rocky and rutted in spots. I’m not entirely sure my Outback would have made it up even if the gate had been open. 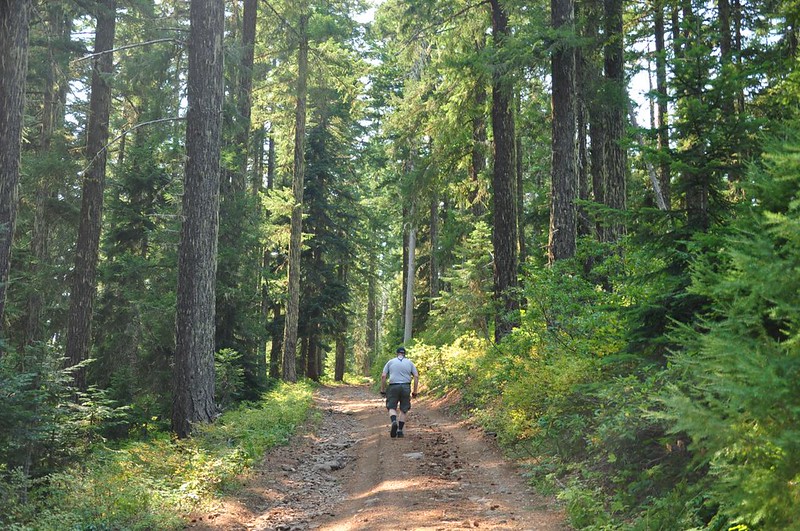 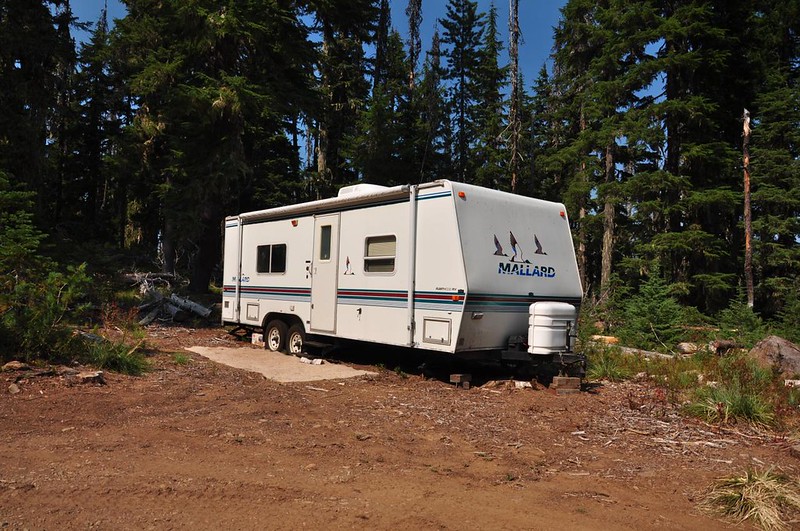 We made it! This particular tower was built in 1997. It is 50 feet tall and has an unusual eight-sided cab that I’ve never seen anywhere else. The previous tower that stood here was built in 1940. 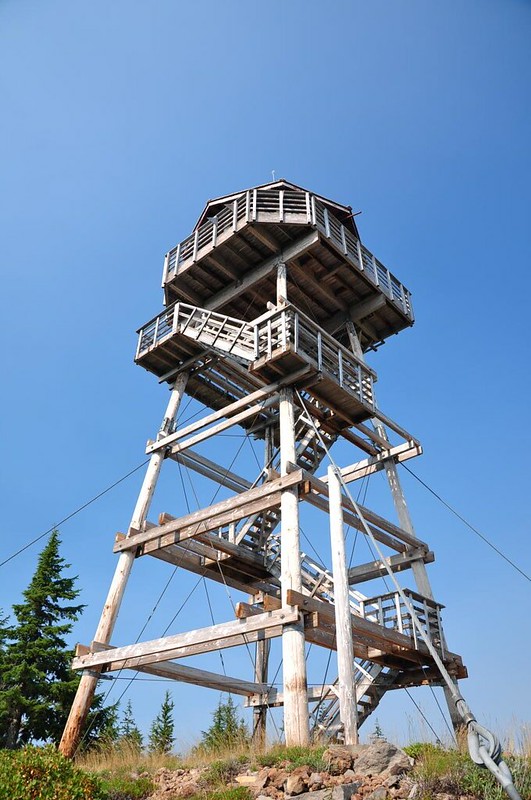 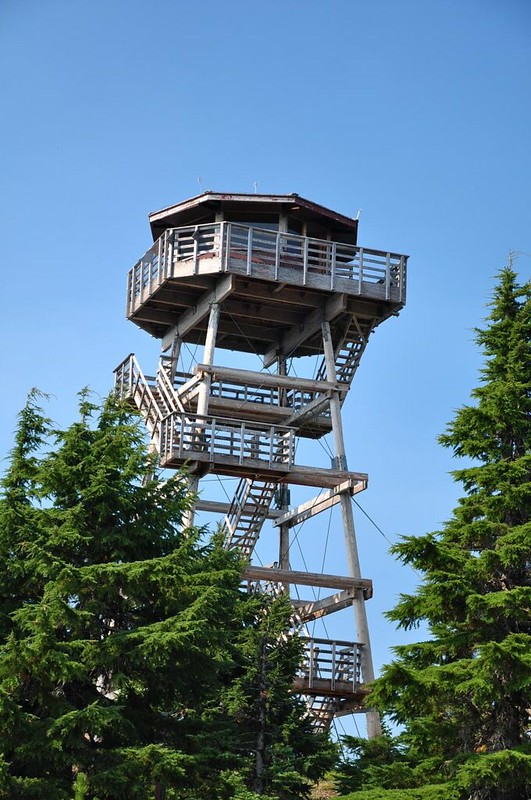 A nice man named Floyd Walker was manning the tower and invited us up to enjoy the views. Unfortunately the views were pretty smoky thanks to smoke drifting up from the Lizard Fire. Mt. Jefferson: 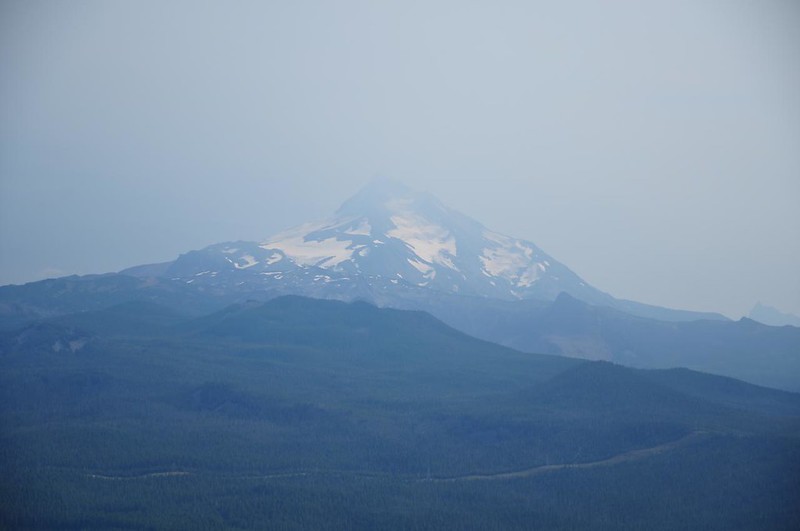 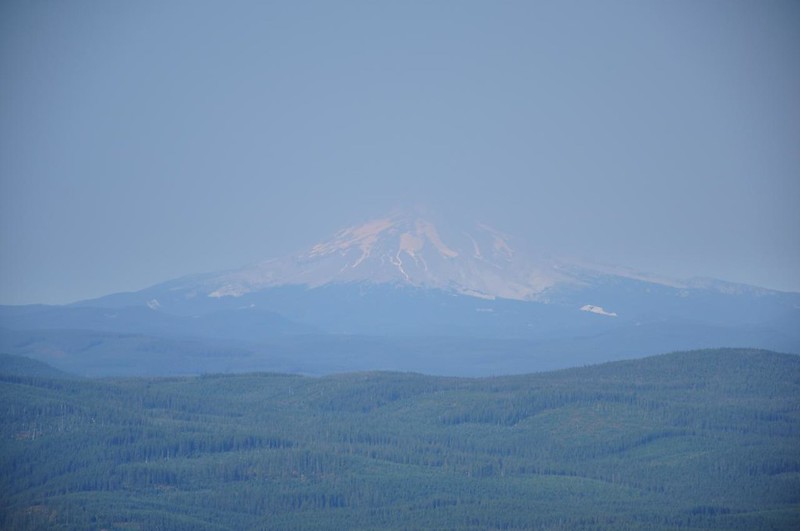 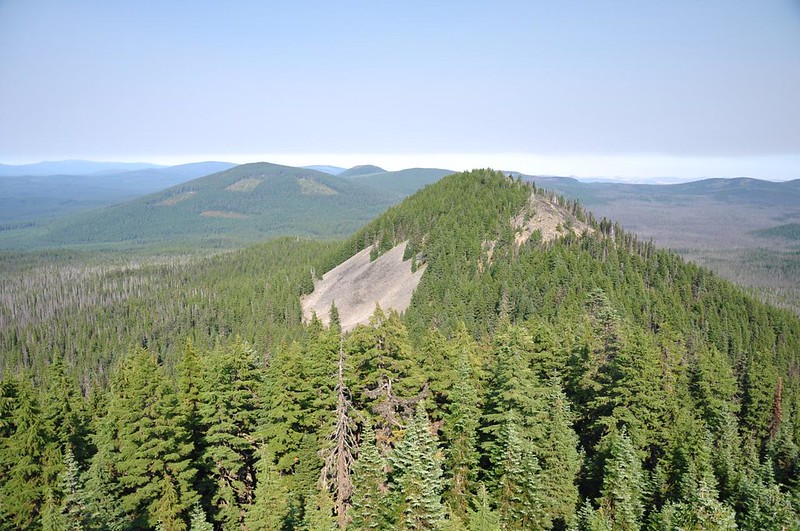 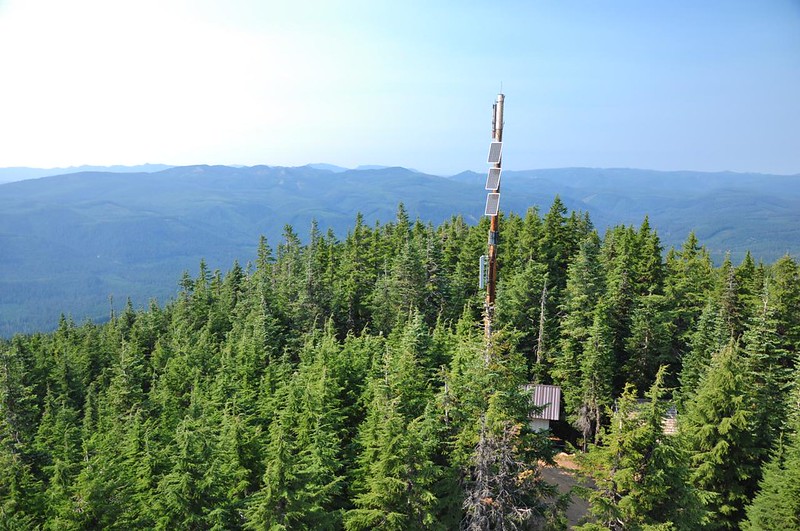 Floyd said the forest didn’t keep a full-time lookout up here, just when the fire danger was high. He also told us that despite the locked gate vandalism is still a problem, even in winter (thanks to people coming in on snowmobiles). He said the lookout had been broken into in the past and items had been stolen. Vandals also stole the copper wire that grounds the tower in a lightning storm. Ugh. People like that are nothing more than pond scum.

Going down is always a little trickier than going up. 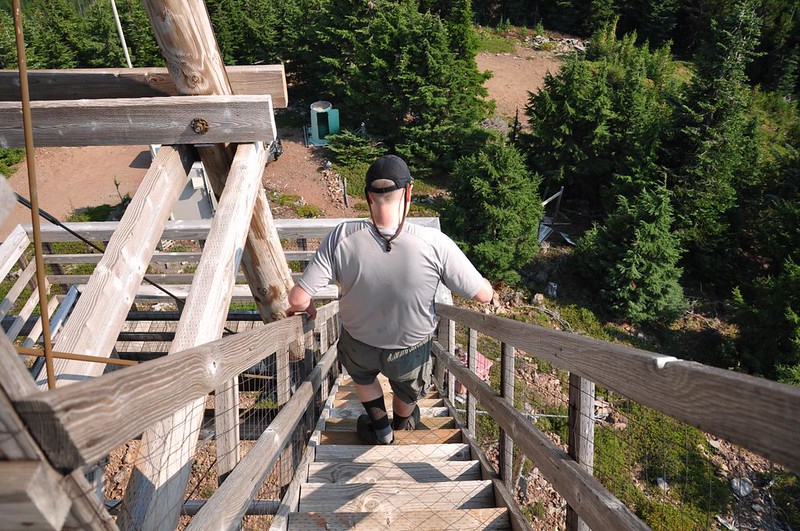 Back at camp that evening we were plagued by yellow jackets at our campsite. This area is notorious for mosquitoes in July and August but I didn’t know yellow jackets were such a problem later in summer.

We managed to camp right next to some morons who were listening to a football game on the radio Saturday evening. They apparently wanted the WHOLE campground to hear the game. Dude, that is TERRIBLE campground etiquette. if it’s that important to you, stay home. Don’t inflict it on the rest of us who are trying to enjoy nature.

The skies were nowhere near as clear that night as the previous night because of all the smoke that had blown in. But it was still pretty. Mt. Jefferson was beautifully illuminated by the moon. 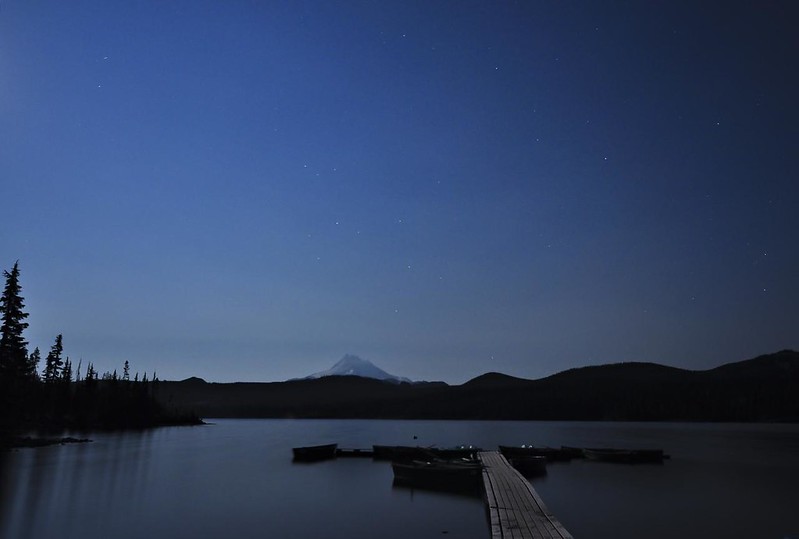 Sunday morning we took a short walk along the shore of Monon Lake to find a geocache. Nice views of Olallie Butte from there. 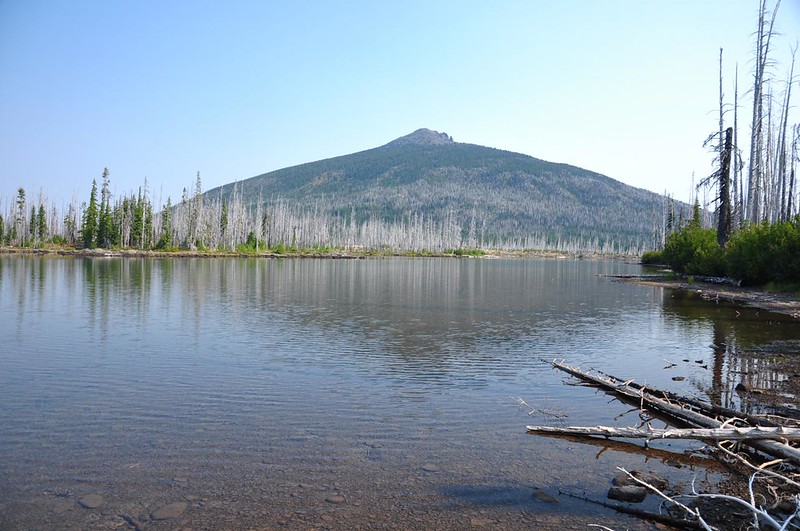 We also did the short jaunt down to Lower Lake, which looks like it would be good for swimming. 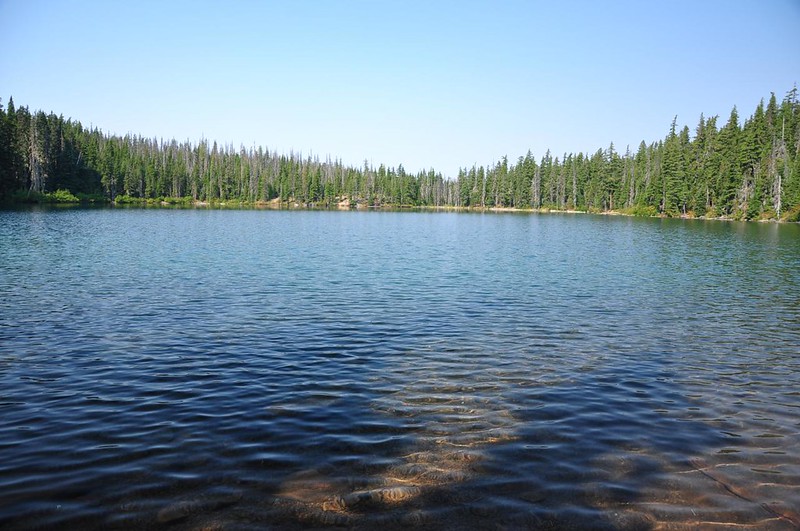 We tried to get to Horseshoe Lake. I had heard the road was bad but passable up to that point, and that the road beyond Horseshoe was utter crap and pretty much impassable. However we discovered the road actually deteriorates much sooner than we thought and becomes utter crap after you pass Monon Lake. About 0.2mi beyond Monon we reached a bit that looked something like this stretch of road we walked down in the Willamette Forest last fall: 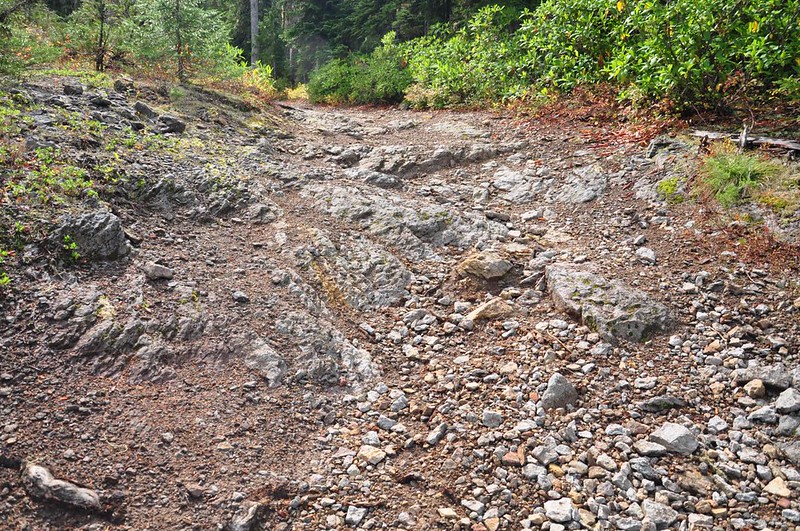 No thanks. I backed down the road until I could execute a five-point turn.

Beautiful weekend! Wish there had been less wind and smoke, but that’s par for the course this time of year. 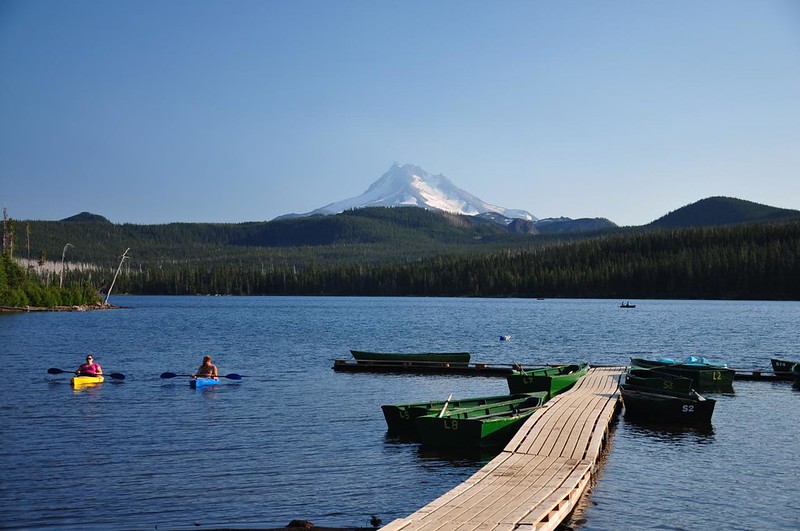