My sister and I were supposed to go backpacking in the Goat Rocks over Labor Day Weekend. But the dismal weather forecast forced us to change our plans and choose a hike that didn’t have views. We decided to hike the Laughingwater Creek Trail up to Three Lakes, which is in the SE corner of Mt. Rainier National Park. About 6 miles one-way, 2,800 feet elevation gain.

We drove north after I got off work on Friday, planning to camp overnight somewhere near Packwood. We knew that Ohanapecosh and La Wis Wis would be full, so we headed up Road 4510 to the Summit Creek Campground. That tiny campground was full too, but we found a flat spot to pitch the tent alongside the road.

After picking up our backcountry permit at the Ohanapecosh Visitor’s Center in the morning, we hit the trail a little after 10:00. It was mostly sunny, but chilly. Fortunately, we kept plenty warm hiking up that trail. The first two miles are thigh burners, then the trail mellows out for a few miles, then the trail steepens again. The trail crosses many seasonal creeks, and we had heard that these are dry in late summer, which proved to be true. But we had plenty of water and it was not a hot day. As for the creek for which the trail is named, we saw it from a distance a couple of times, and only once did the trail get near enough that we could bushwhack over to take a closer look. We had the trail pretty much to ourselves; we only saw two trail runners and two different couples who were hiking down.

We arrived at Three Lakes around 2:00. There is a pretty nice-looking patrol cabin here. It was renovated in 2005, so it looks pretty sharp. Has a decent view of the lakes too. We had also been told at the visitor’s center that there was a bear pole on which we could hang our food. But the bear pole was definitely not functioning as it should be, with several parts laying on the ground. We managed to make it work for us….sort of. (There is a notebook log outside the cabin and reading entries from the past five years, it seems that the bear pole has been broken for pretty much that whole time!) 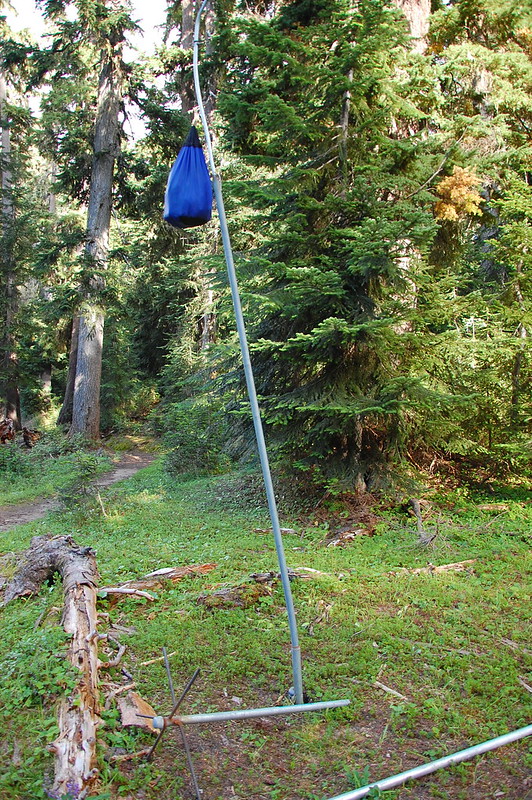 The third lake of Three Lakes is a little further down the trail and is actually just over the border in the National Forest. We went and checked it out. That couple we talked to earlier had also told us they had climbed the bluff by the third lake and had great views, so we gave that a try. But of course, it was too cloudy to see Mt. Adams or Mt. Rainier. 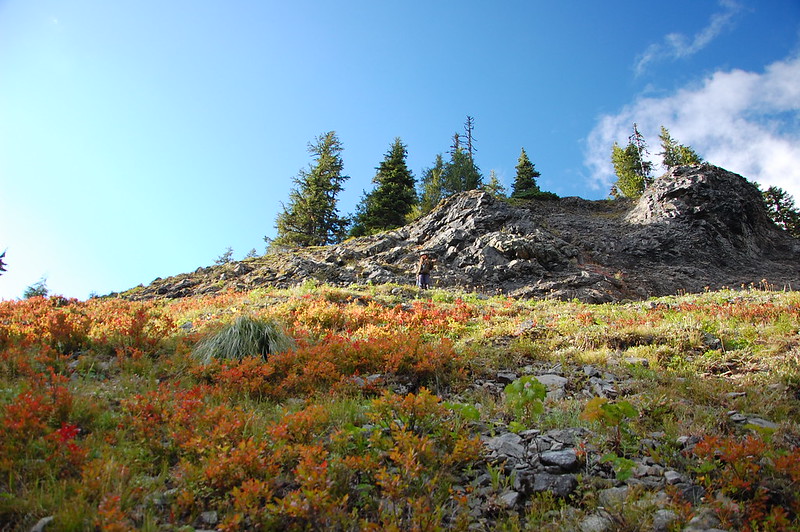 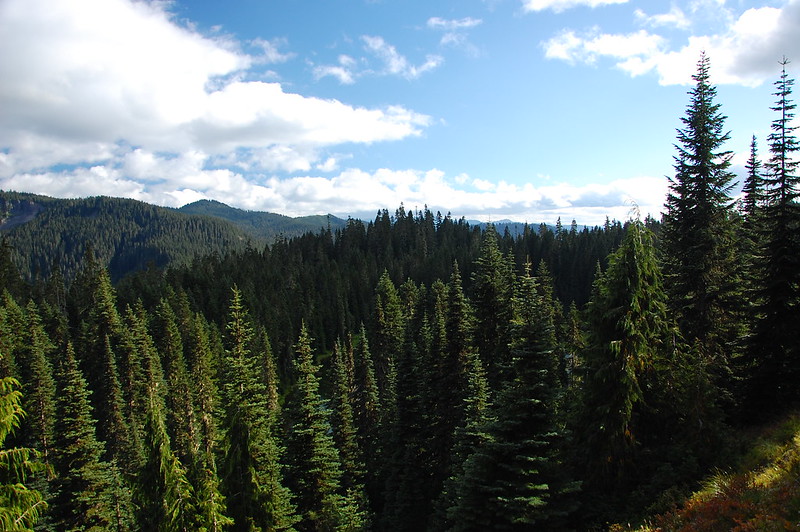 Despite the relatively sunny weather, it was quite cold, so back at camp we hung out in any patches of sunshine we could find. (FYI, Three Lakes is at 4,880 feet.) After dinner we played gin rummy and watched the lakes slowly disappear into dusk.

We sorely wished we could build a campfire; there was plenty of dead wood around. But no fires allowed. Good thing we didn’t try to have a sneaky campfire, because a park ranger showed up in the late evening with two female hikers. They had hiked down from Chinook Pass and stayed in the cabin that night. We knew that the area didn’t see much in the way of hiker traffic, so we asked why there was this nice maintained cabin up there. He said it was mostly used in the autumn during hunting season. Since the park/forest boundary is just a stone’s throw away, the park likes to keep a ranger presence up there to deter hunters from coming into the park. The ranger offered to store our food in the cabin overnight since the bear pole was so iffy. When we brought our food there and stepped inside, we didn’t want to leave! There was a woodstove in there and it was so cozy and warm! Our glasses fogged up from the sudden and massive difference in temperature between inside and outside. We dropped off our food and returned to our chilly campsite.

After a cold and rainy night, in the morning we awoke to thick fog. We were in the clouds. 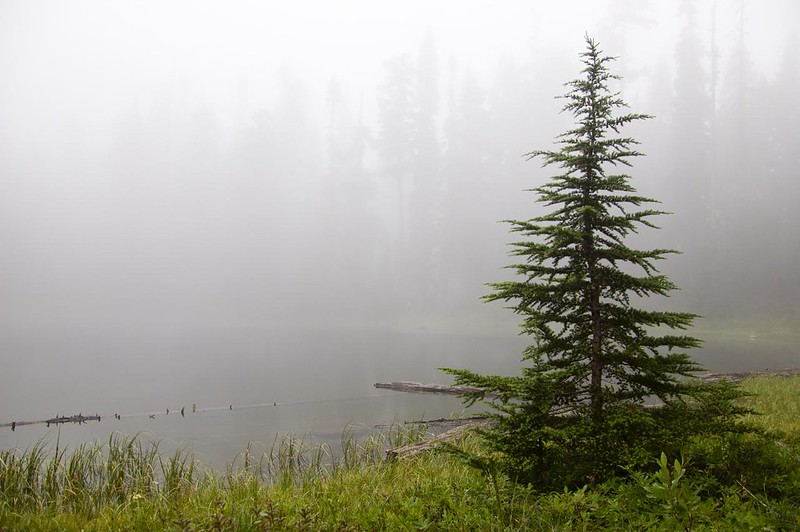 Breakfast was dry but very cold. I inhaled my oatmeal in three minutes flat because I hate eating cold oatmeal and it lost its heat so very quickly. We retreated to the tent to warm up and soon after that it started raining and continued to rain for five sold hours. Thank God for that deck of cards we brought!

When the rain finally let up around 3:00, we emerged from the tent stiff and sore from being cooped up and cramped in there for five hours. After filtering some water, we decided to stretch our legs and hike the 1.5 miles up to the PCT. Our original plan for the day had been to hike north on the PCT to Two Lakes or beyond, but we didn’t have the time or energy now.

Beyond Three Lakes, the trail climbs steeply and we warmed up in no time. We passed a pretty pond in a bowl below the trail. 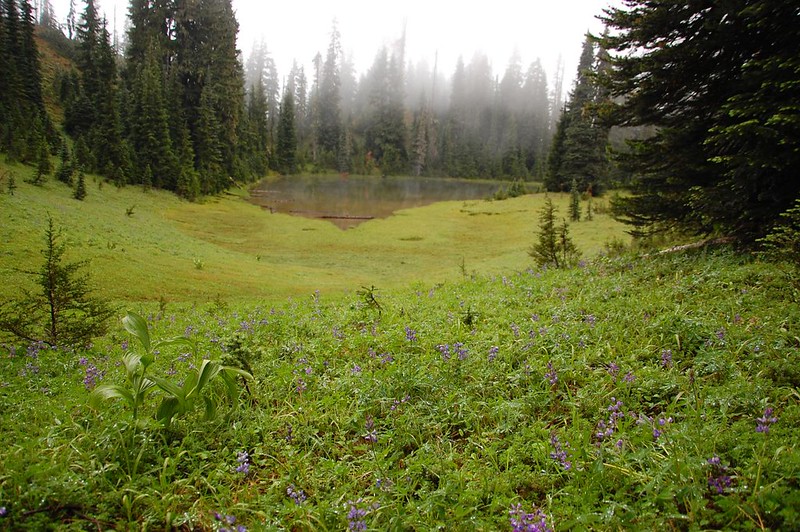 To our surprise, the trail passed through a number of awesome-looking meadows. I bet these are gorgeous (and buggy) in August! We were pleasantly surprised to see lupine still blooming. 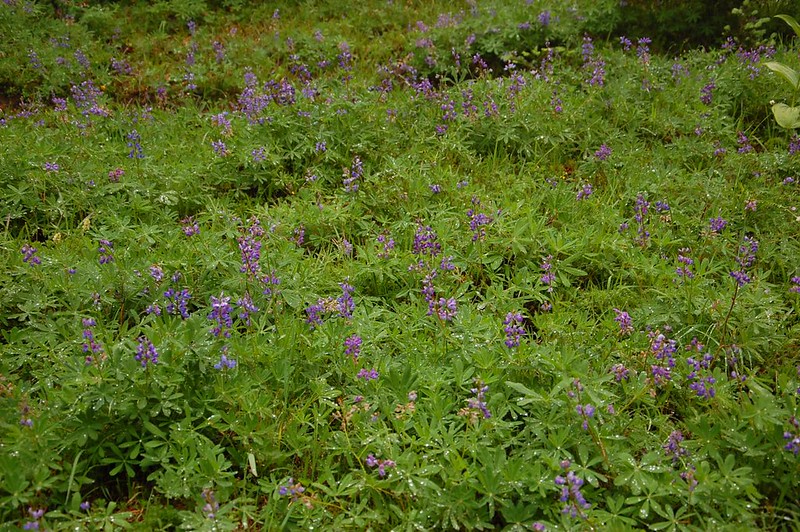 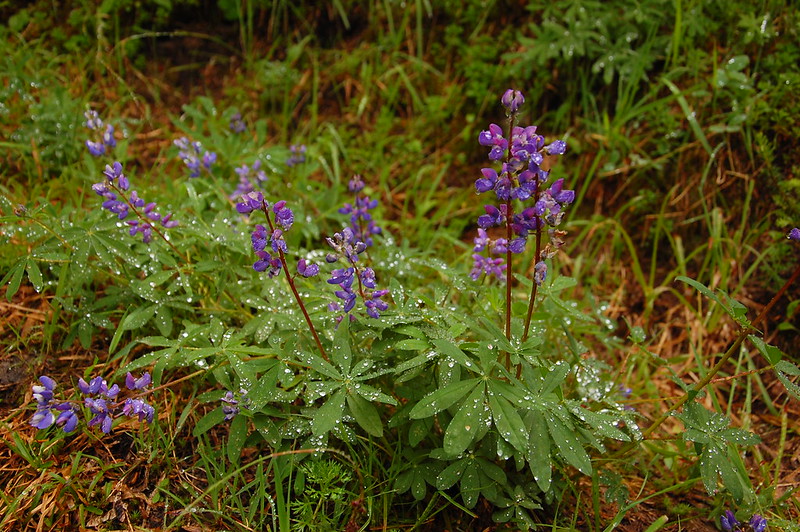 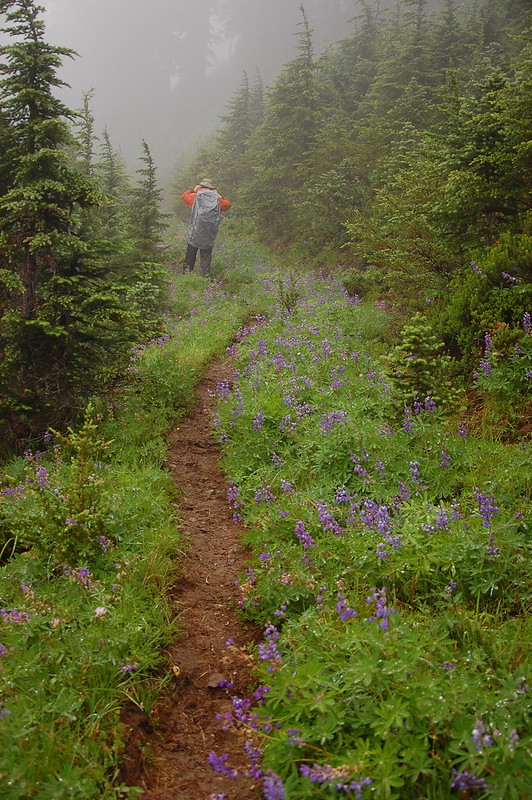 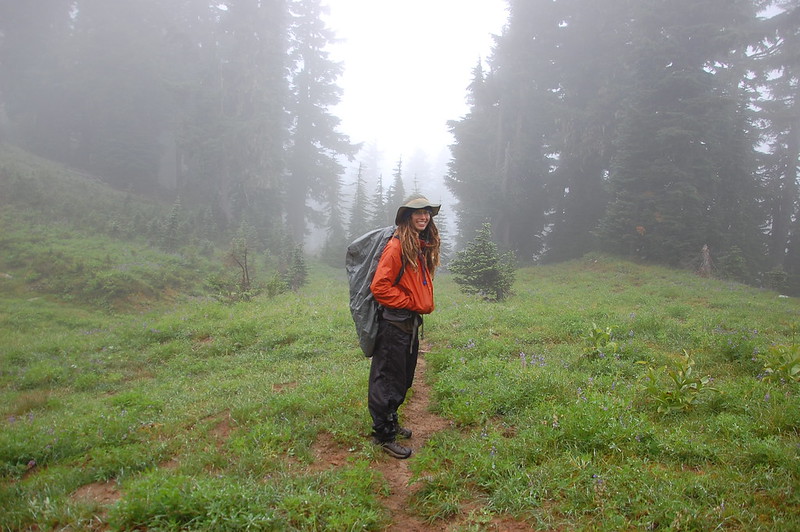 We had read that there were views of Mt. Rainier from up here, but our only views were of the inside of a cloud. 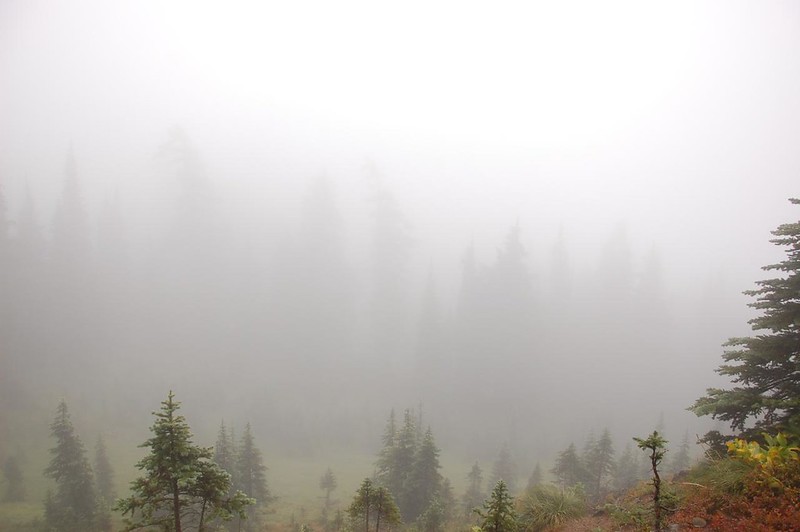 Once we got up to the PCT, we turned around and headed back down. On the way back to camp, we saw two elk in the forest, but they were pretty skittish and galloped away. Dinner was another hurried affair, eating it fast before it got cold. The ranger and his companions had left earlier in the day, but another couple showed up to spend the night in one of the campsites. We played cards outside until we couldn’t stand the cold and then went in the tent to play some more before turning in for the night. 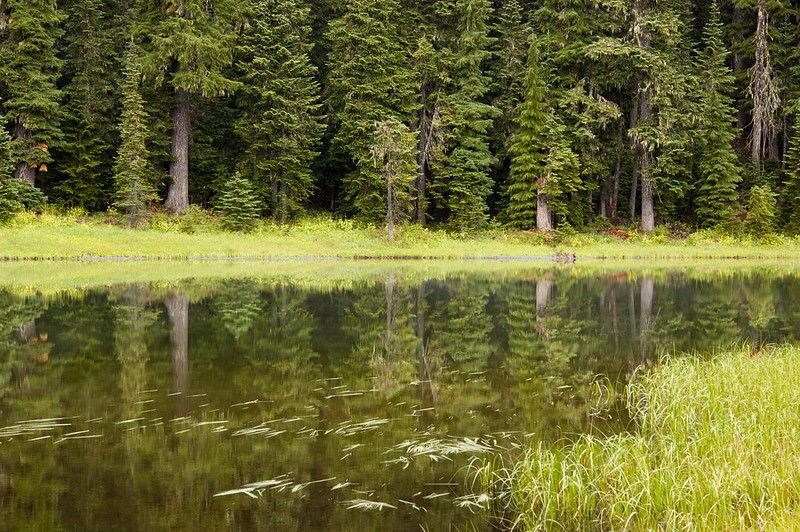 I didn’t sleep well either night, not being able to get comfortable for some reason. It rained again Sunday night, but Monday morning was cold, foggy, and dry. 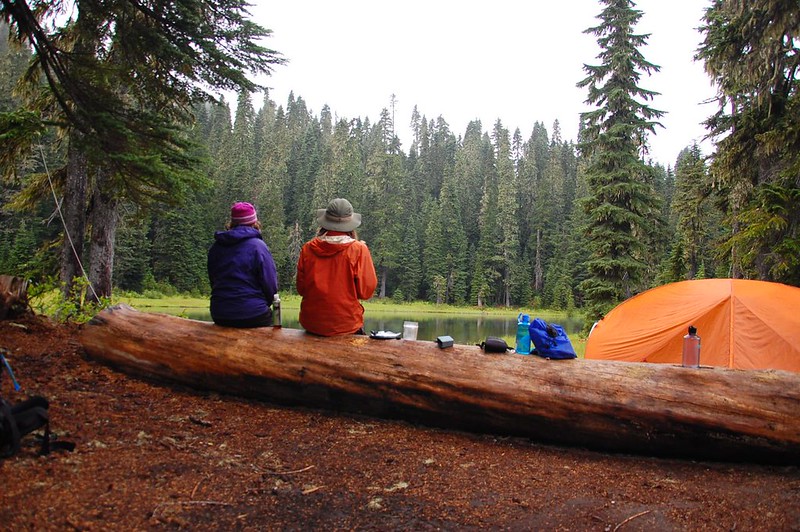 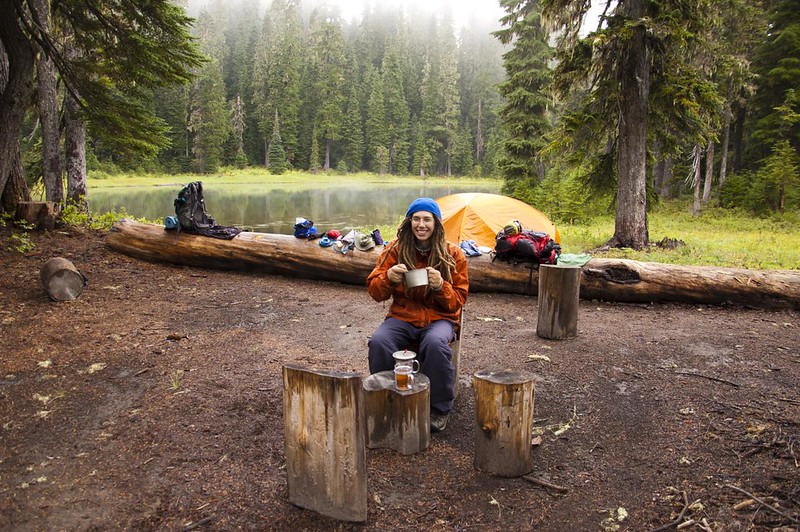 We saw three people, five horses, and two dogs pass by on their way out from the PCT. Stock is allowed on the Laughingwater Creek Trail, but like all the park trails, dogs are not, and there is a sign at the boundary saying so. We also saw two hikers later in the day with an off-leash dog. Doesn’t anybody read the signs??

After breakfast we packed up our wet gear and headed down the trail. It seemed like the clouds might burn off a little, but they never did. At least it didn’t rain any more that day. We hiked out in about three hours. 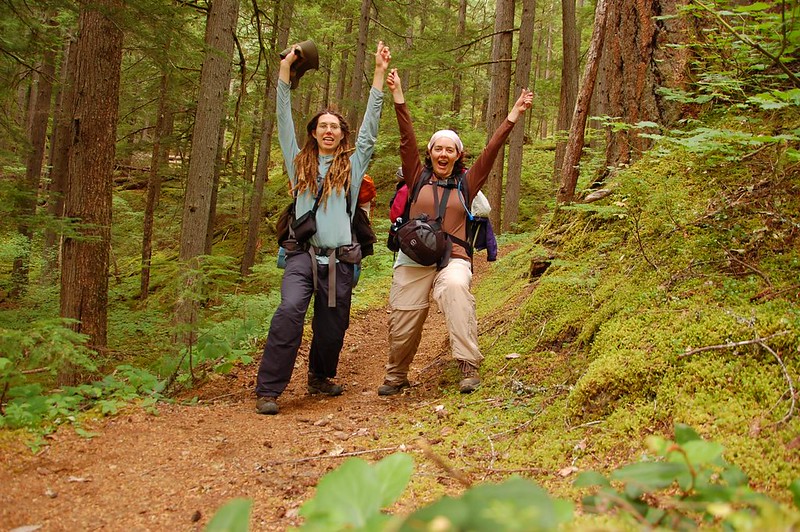 Very cold wet weekend, with some pretty gray, depressing weather, but it was still great to spend time with my sister! And we are gin rummy pros now.

We hit Grove of the Patriarchs before heading home. Ran into a loud obnoxious group of tourists that kind of ruined the peaceful experience of those big trees, but it was still cool.

One important lesson from this trip: If you’re going backpacking in the cold, especially if you’re going to have a good amount of down time, make sure you’re allowed to build a campfire.