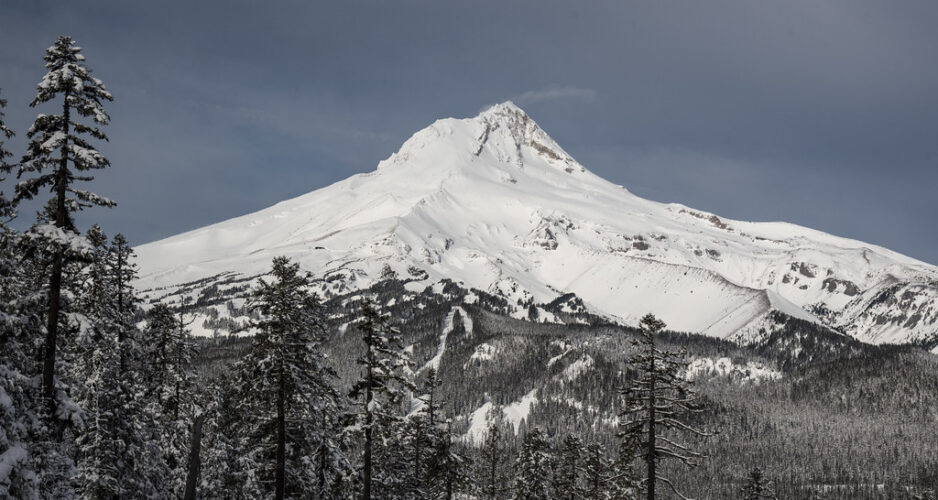 After a month of no hiking I was eager for some time in the mountains so I got an early start this morning and headed up to Bennett Pass Sno-Park.

I could see that the sunrise was going to be gorgeous so I stopped at the Jonsrud Viewpoint in Sandy to see if I could get some photos. The viewpoint was packed with photographers and their tripods so I only snapped a quick photo before sunrise really got going, then kept driving up the highway. 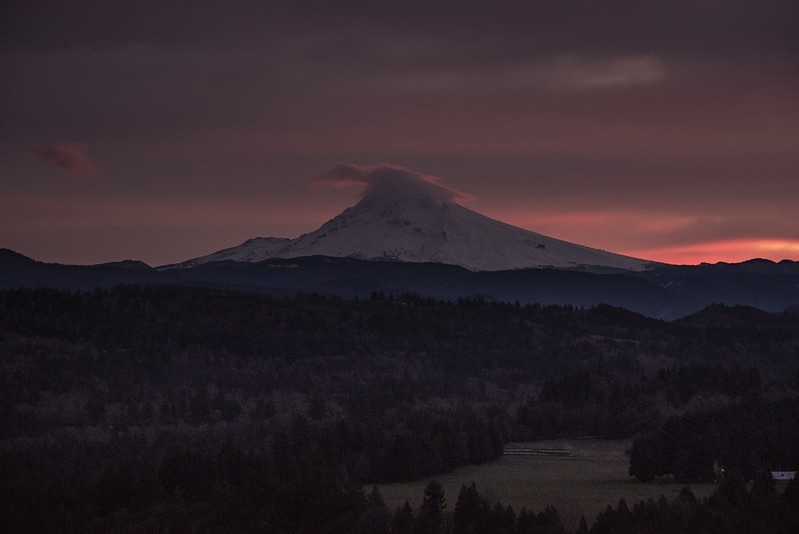 As I drove through Government Camp at 8am there was a sign saying that the lots at Timberline Lodge were already full. Fortunately when I arrived at the Bennett Pass Sno-Park at 8:20 there were only about eight cars there. Mt. Hood loomed to the west: 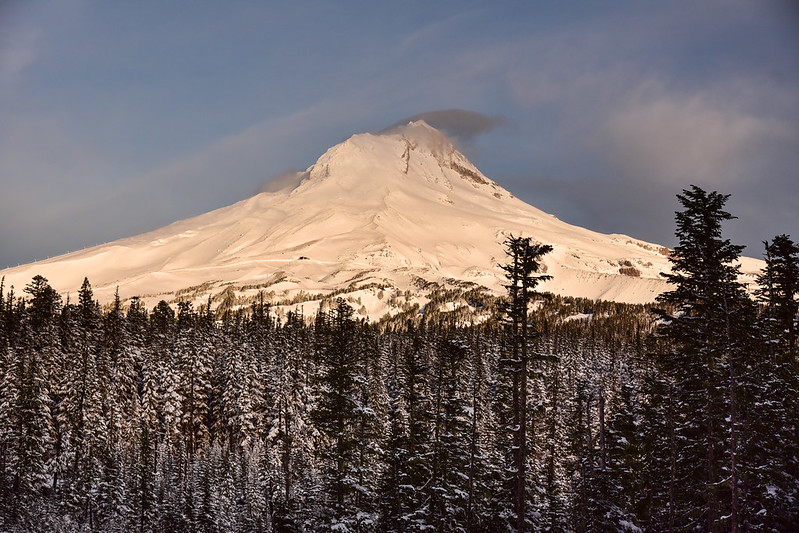 I put on my snowshoes and set off down the road. It was pretty quiet except for the occasional nearby explosion which I assume was avalanche control at Mt. Hood Meadows: 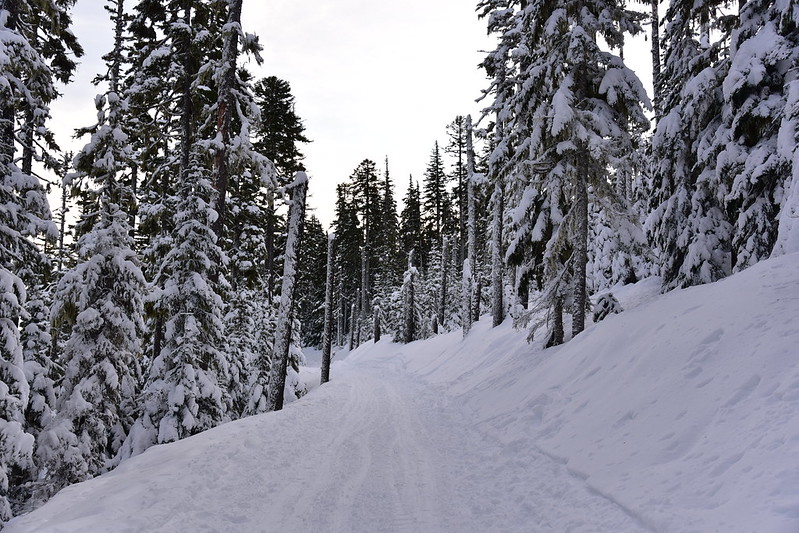 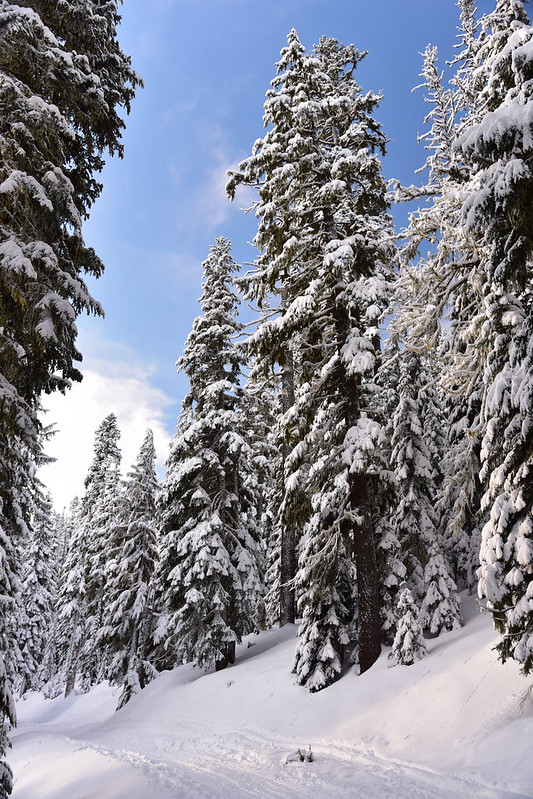 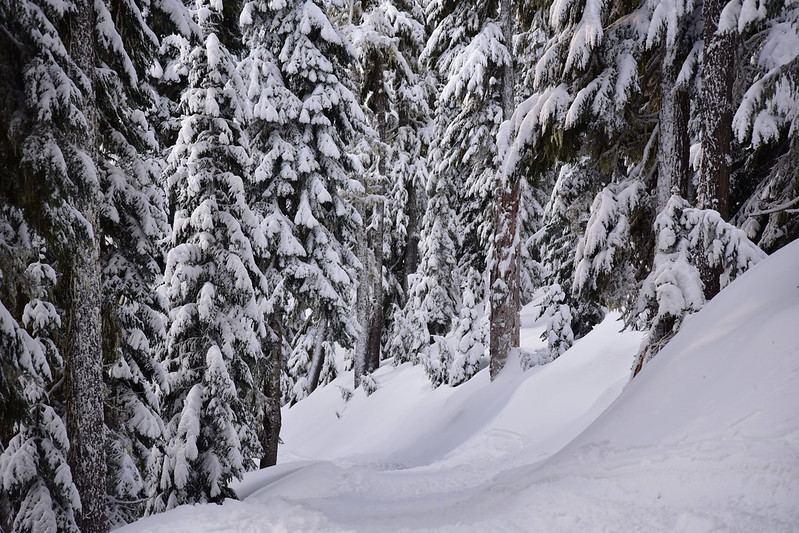 I got a peek at Mt. Hood through the trees: 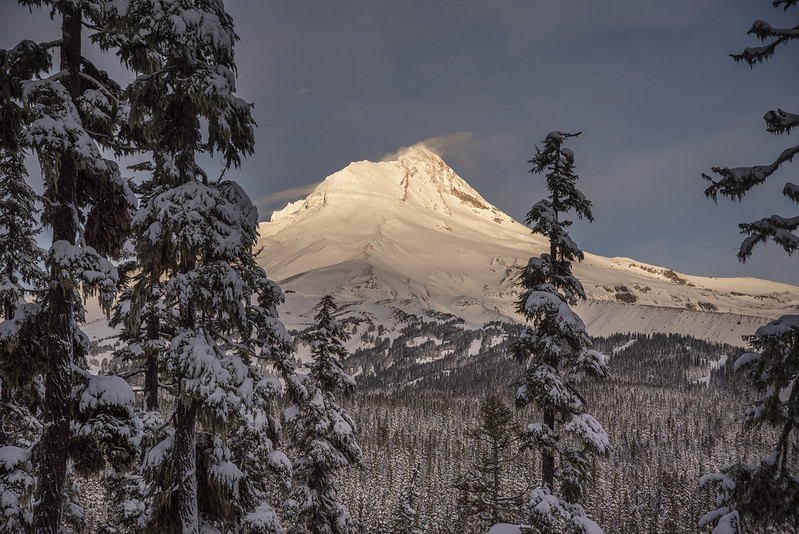 After 1.7 miles I reached a spectacular viewpoint of Mt. Hood: 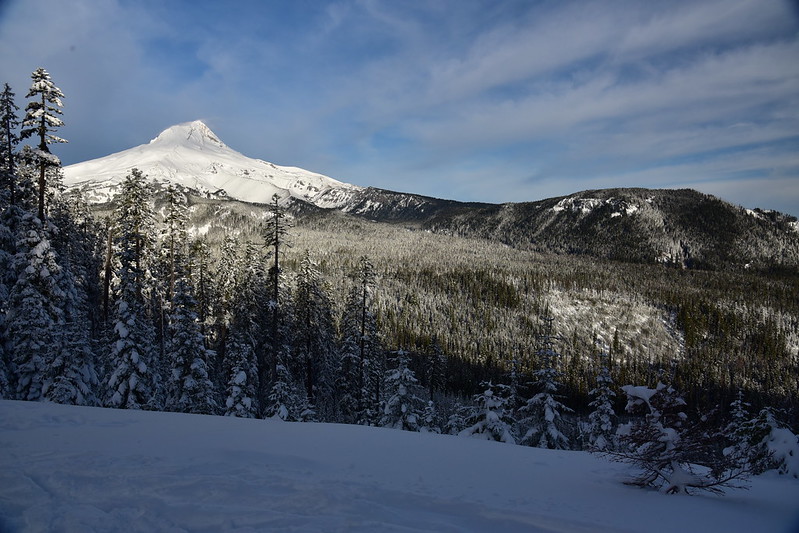 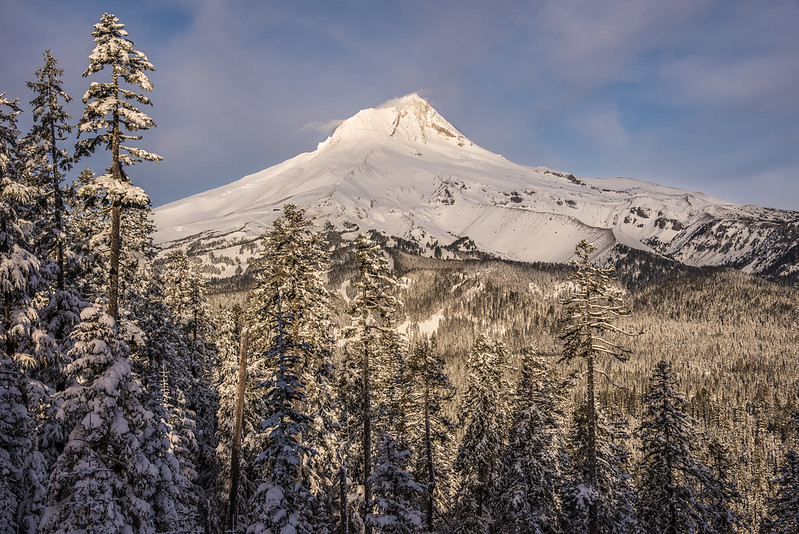 After lingering for awhile to enjoy the view I continued up the road: 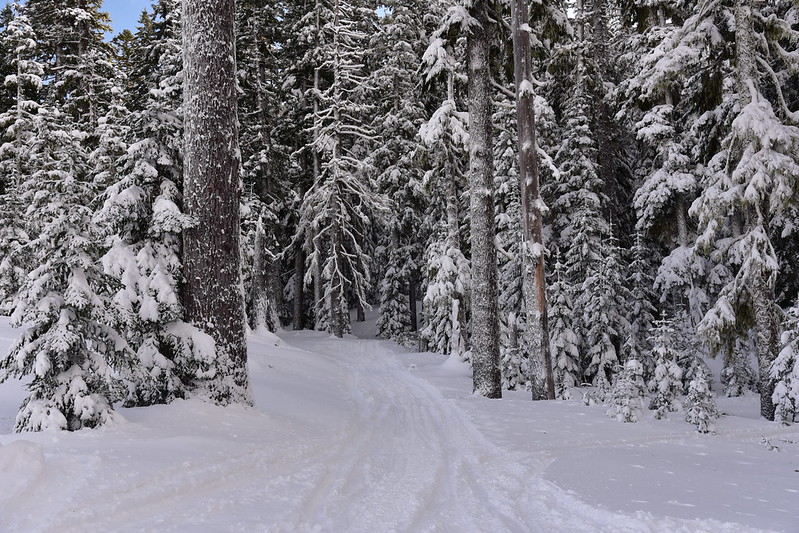 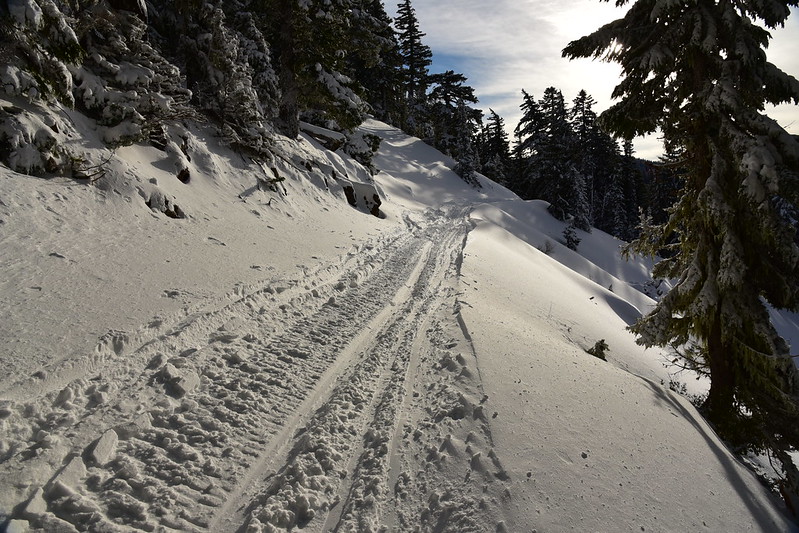 There was a nice stretch where I could see south to Mt. Jefferson: 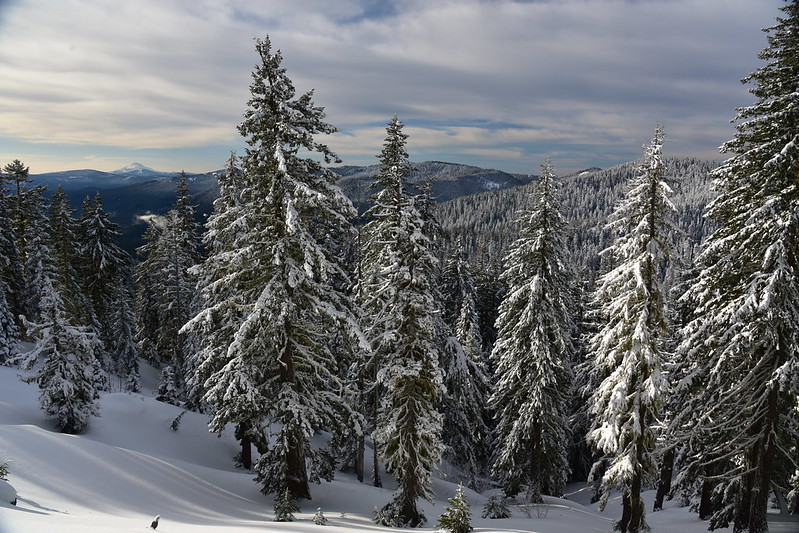 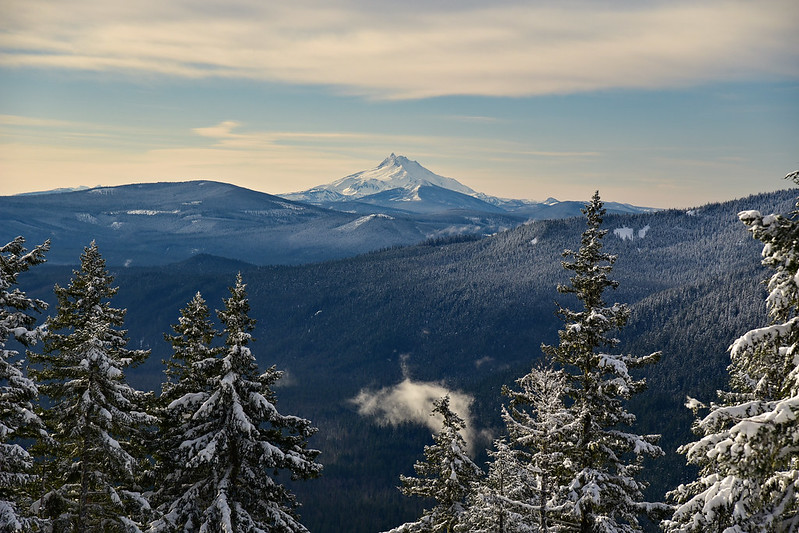 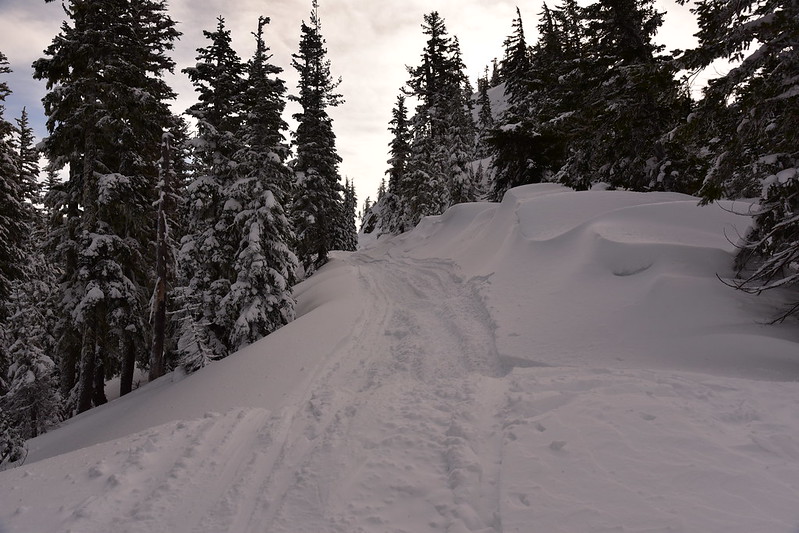 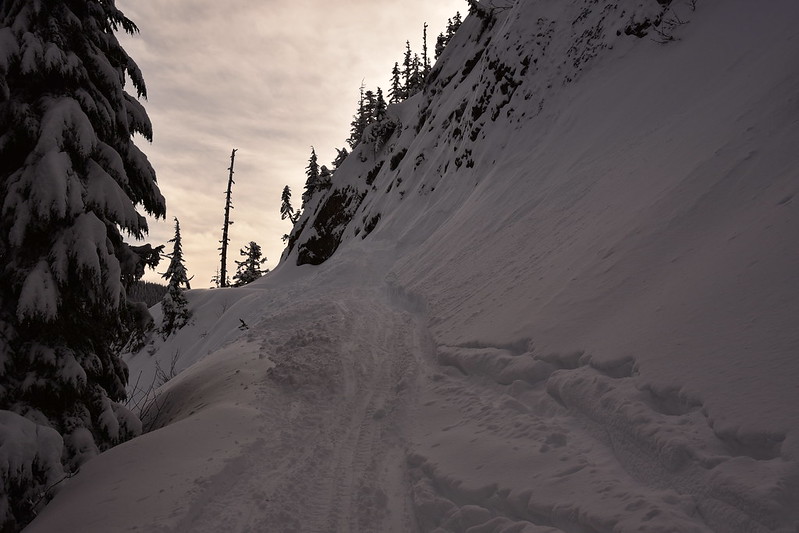 At 2.5 miles the road passed between two big rocks and started descending, so I made this my turnaround point: 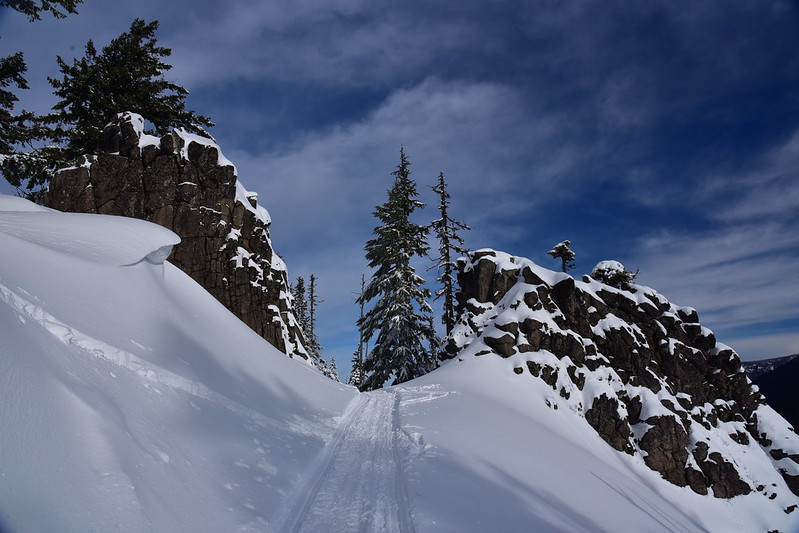 I had seen no other people on the road so far, but now started seeing more and more people. I got some nice views of Mt. Hood on the return trip: 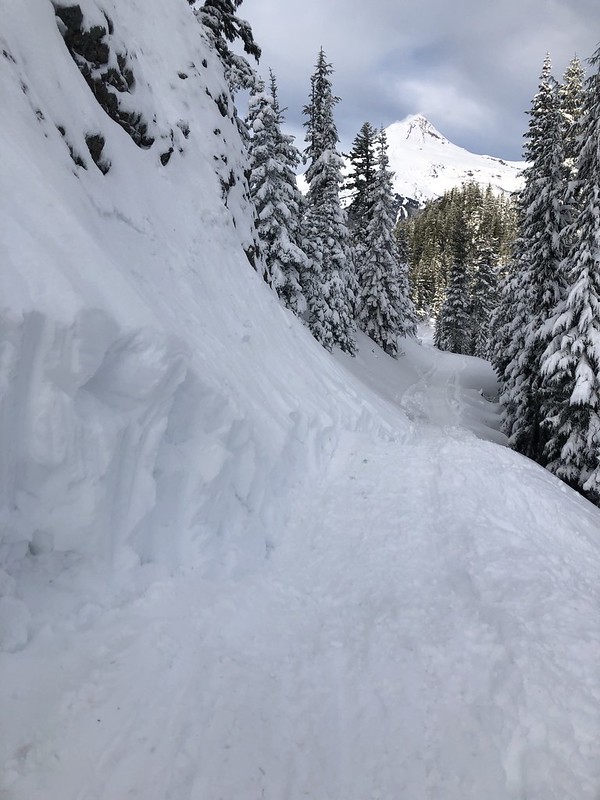 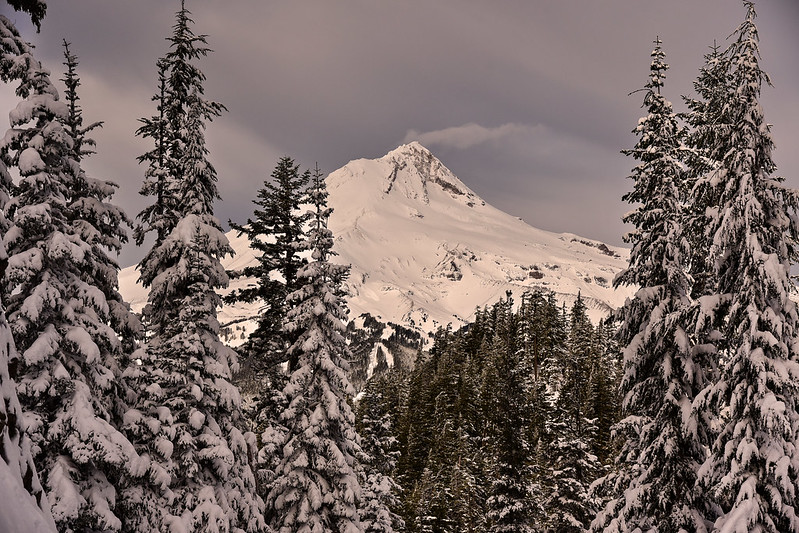 I stopped at the viewpoint for one last view of Mt. Hood before continuing to my car: 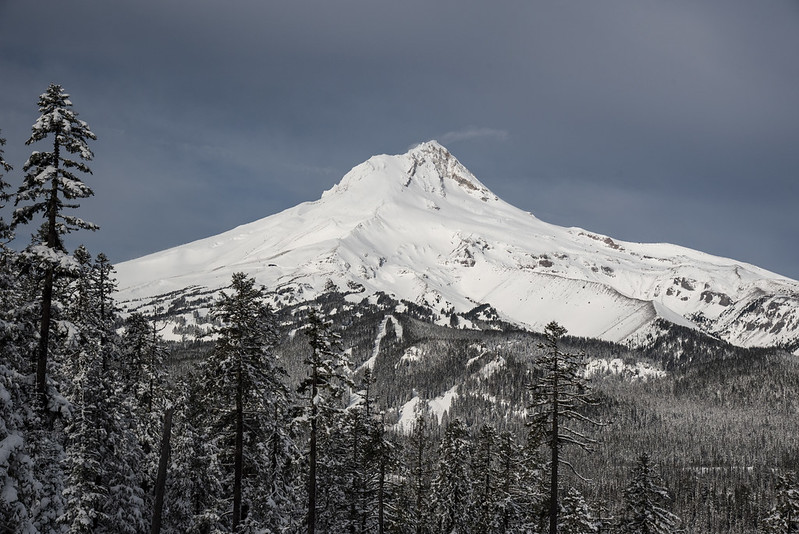 When I got back to the sno-park a little before noon it was a zoo. There were cars and people everywhere. As I was pulling out, there was an enormous pickup truck with a snowmobile trailer trying to shoehorn himself into a parking spot that may have worked for a car, but not for him. With that big a rig, you need to arrive a lot earlier than noon! When I drove past the White River Sno-Park it was an absolute nightmare. The big lot parking lot was full, and there were cars parked on both sides of the highway, which I’m pretty sure is illegal. Traffic was backed up for more than a mile going in the opposite direction, but fortunately was moving in my lane. Driving through Rhododendron later I passed eastbound traffic that was backed up for several miles going eastbound. The pandemic + nice weather + Christmas break has brought people out in droves to the great outdoors this week. I’m glad I got an early start.