On the final day of our long coast weekend we decided to visit the Oregon Dunes National Recreation Area which stretches about 50 miles from Florence at the north end to the town of North Bend at the south end. We stopped at the Oregon Dunes Visitor Center (only open weekdays) in Reedsport, which is about at the halfway point between Florence and North Bend: 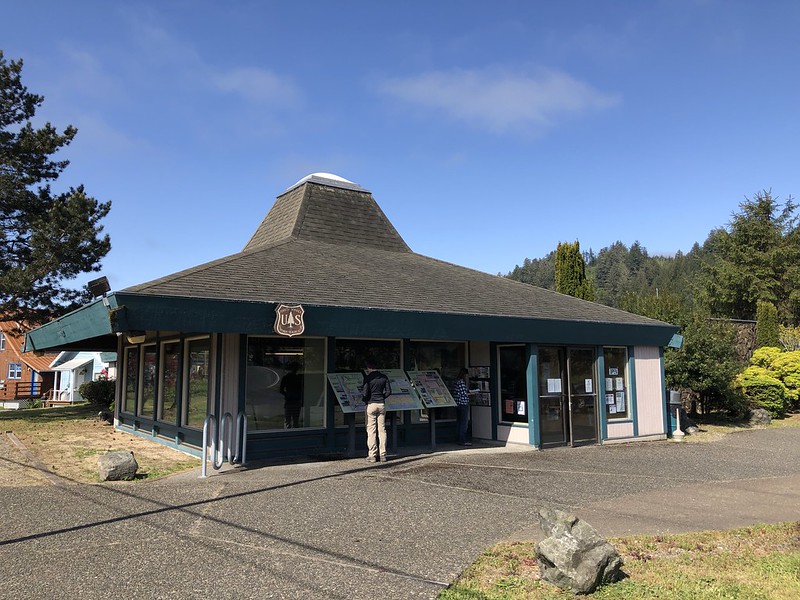 We intended to do a hike starting from the Oregon Dunes Day Use Area, but we accidentally parked and started hiking from the Tahkenitch Creek Trailhead just south of there. We quickly realized our mistake, but decided to go a short distance and then drive over and do the hike we had intended to do. 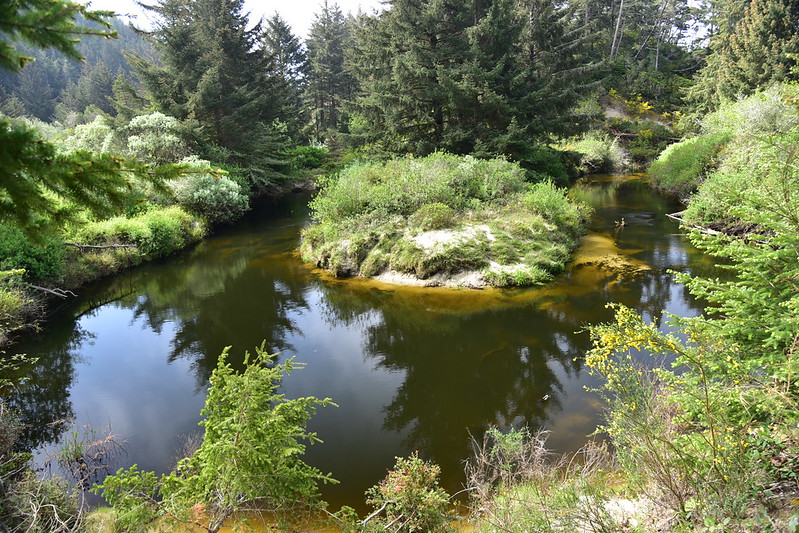 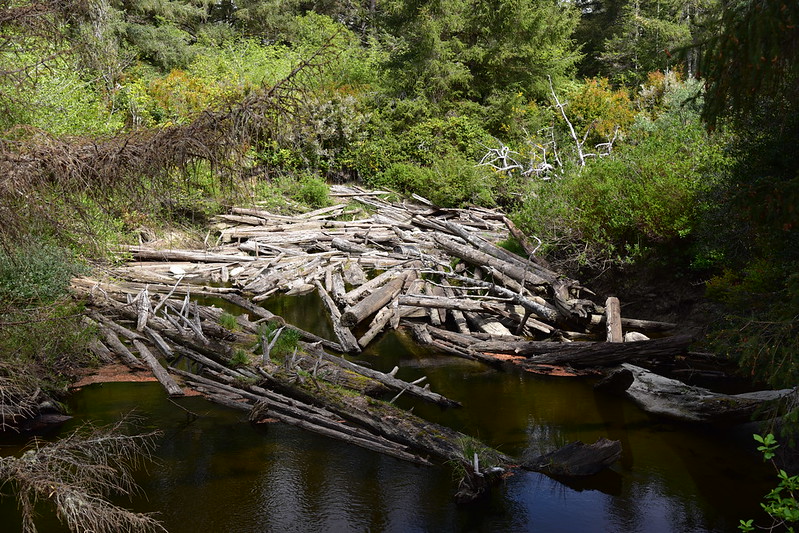 After hiking a little bit, Deb said “let’s take a shortcut!” The car was very close by as the crow flies, but it turns out we should have stayed on the trail. Although this “shortcut: started out in sandy dunes, it quickly took us into some thick brush that got more so as we proceeded. Stupidly, we decided to keep going, rather than turn around. The brush was unbelievably dense and the going was slow. At one point Deb grabbed my pack (because it kept getting hung up on the brush) and forged ahead to scout the best route, often doubling back and looking for a better way. I only took a few photos during the ordeal and these were in sections where it wasn’t quite as bad, so imagine something far worse than this: 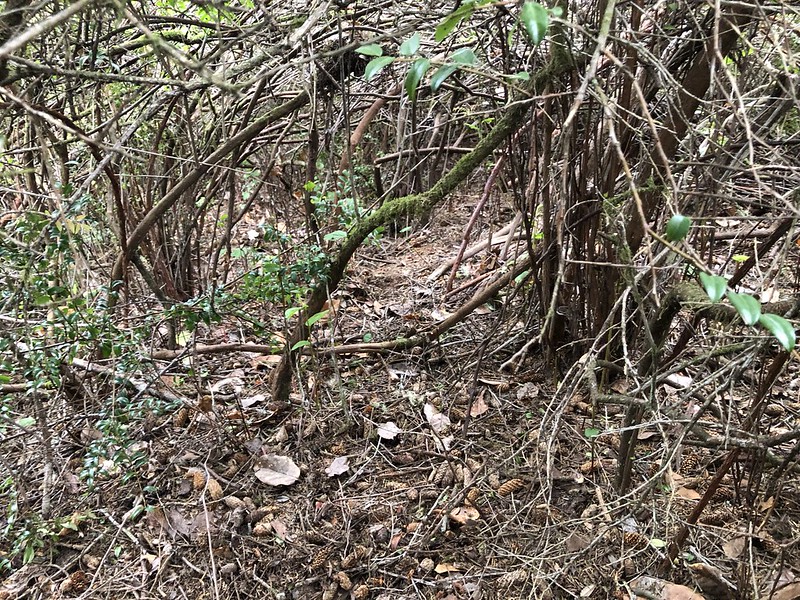 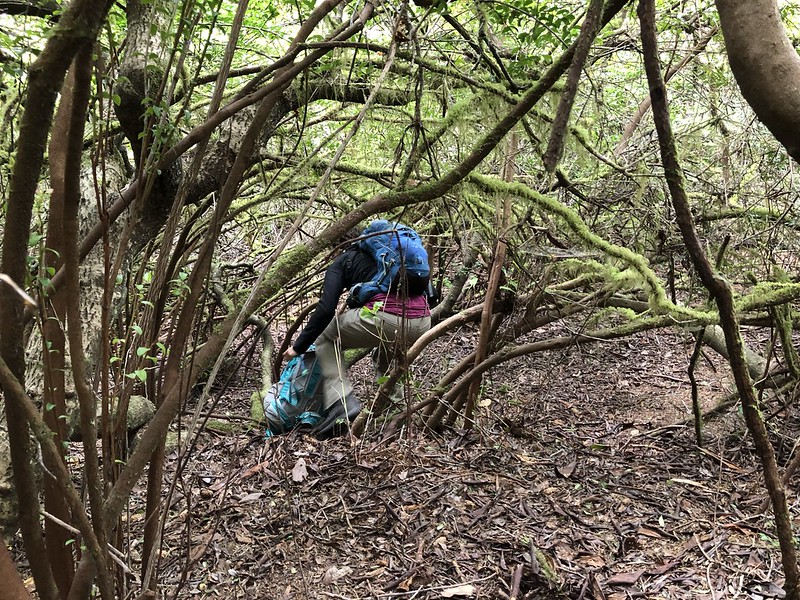 By the time we got back to the car I was bruised and tired and in no mood to do any more hiking, so we never did the trail we had intended to do. Instead we drove back to Reedsport and stopped in at the Umpqua Discovery Center: 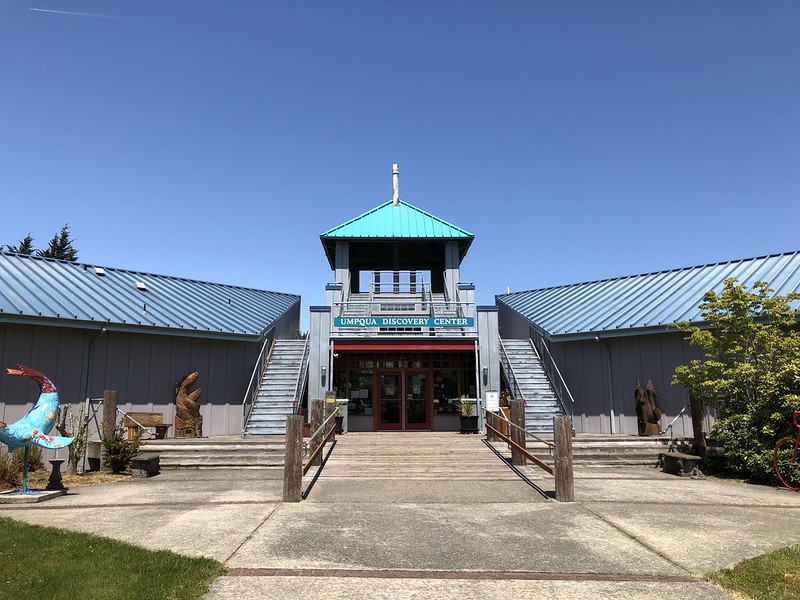 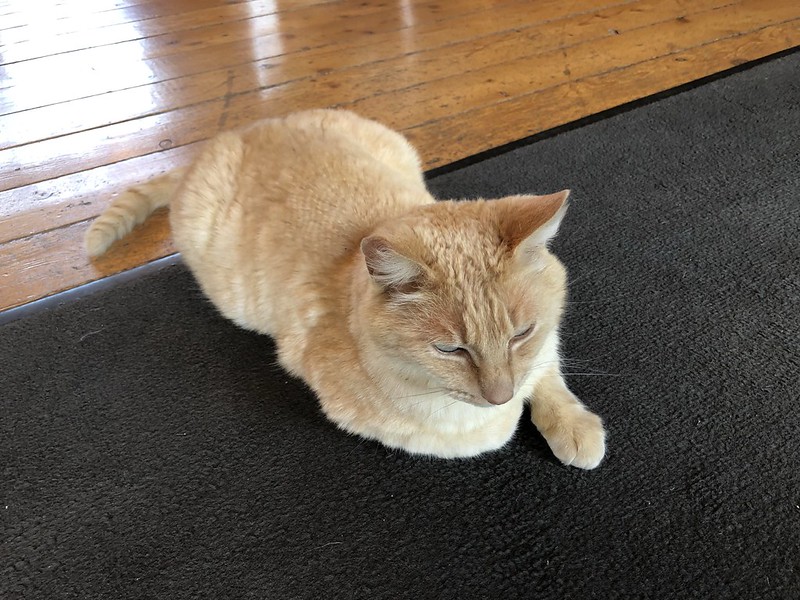 Why yes, I’d be happy to stretch out and let you pet my tummy: 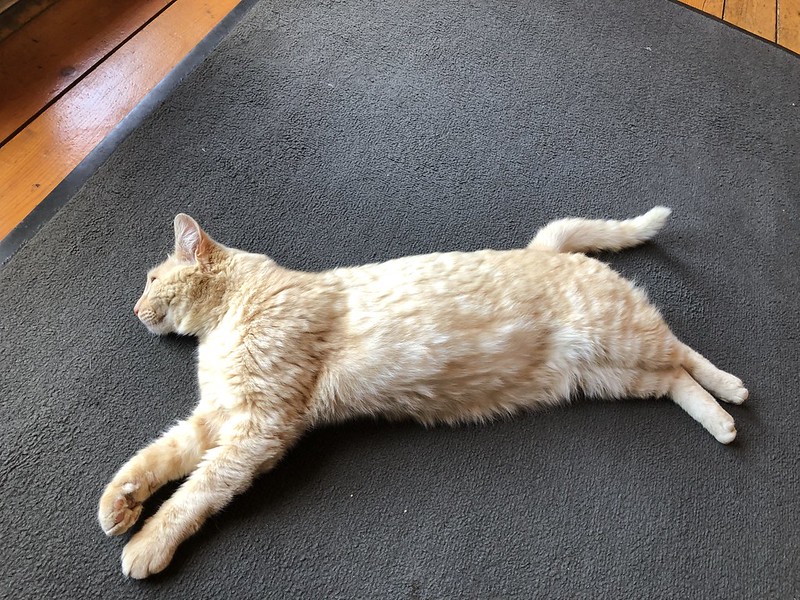 The museum’s exhibits covered the natural and cultural history of the region. It wasn’t a comprehensive history, though. The whole white-men-displacing-the-natives story wasn’t told. But the painted panels throughout the museum were quite beautiful: 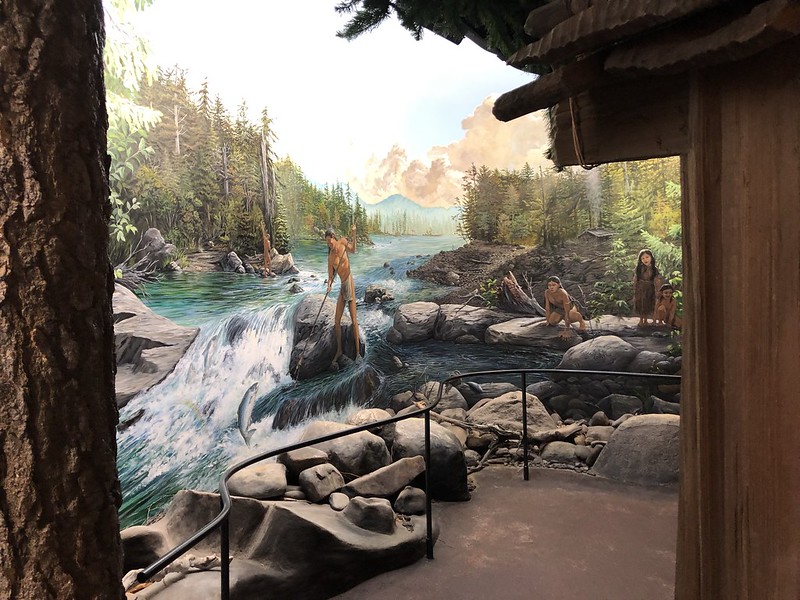 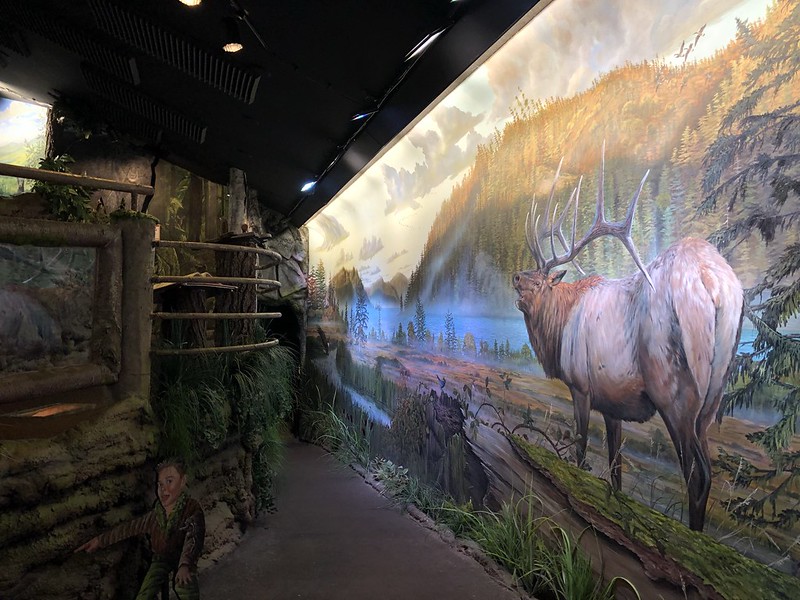 Afterward we went up to the viewing platform on top of the museum for a nice view of the Umpqua River: 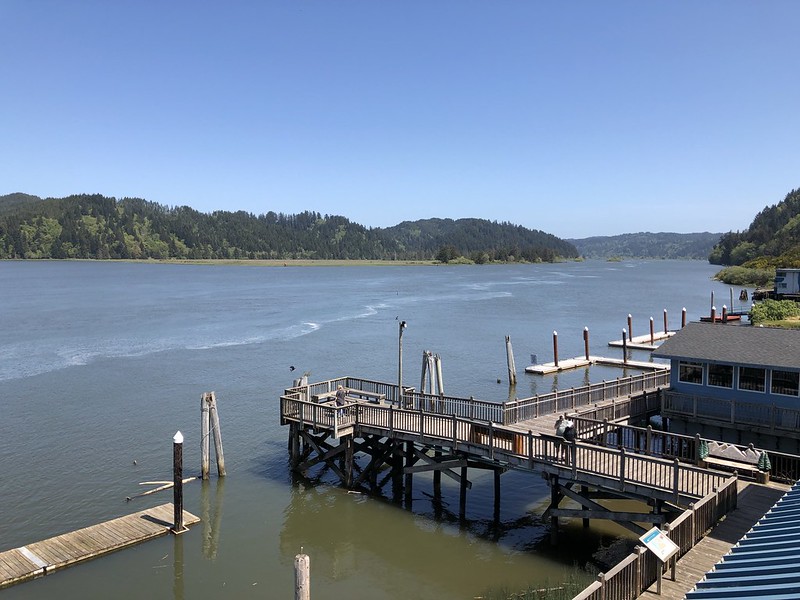 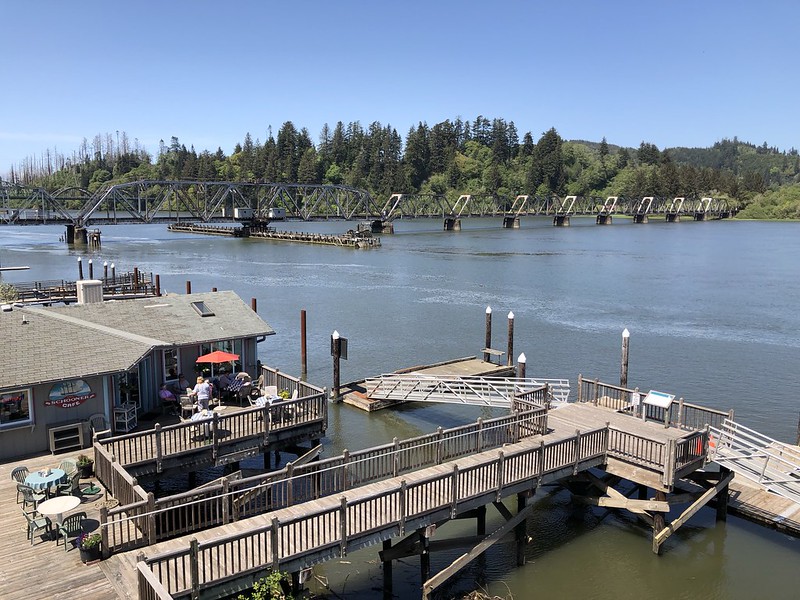 We had a bite to eat in Reedsport and then started heading home on Highway 38. It was such a warm gorgeous afternoon and we weren’t quite ready to end the day. On Google Maps we saw a park called Umpqua Myrtle State Park on Henderer Road west of Elkton, so we drove over to check it out. 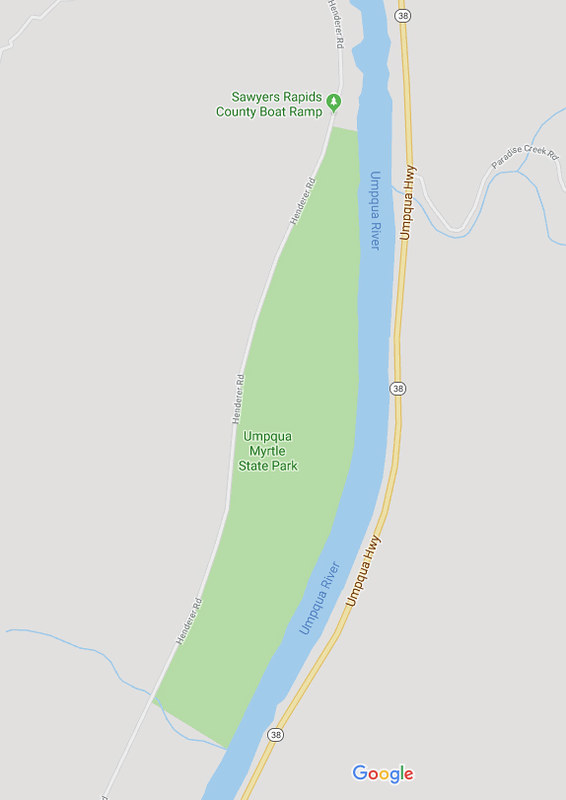 It turned out, however, to be non-existent. The Sawyer’s Rapids County Boat Ramp was nearby, though, so we parked there and walked down to the river to check it out: 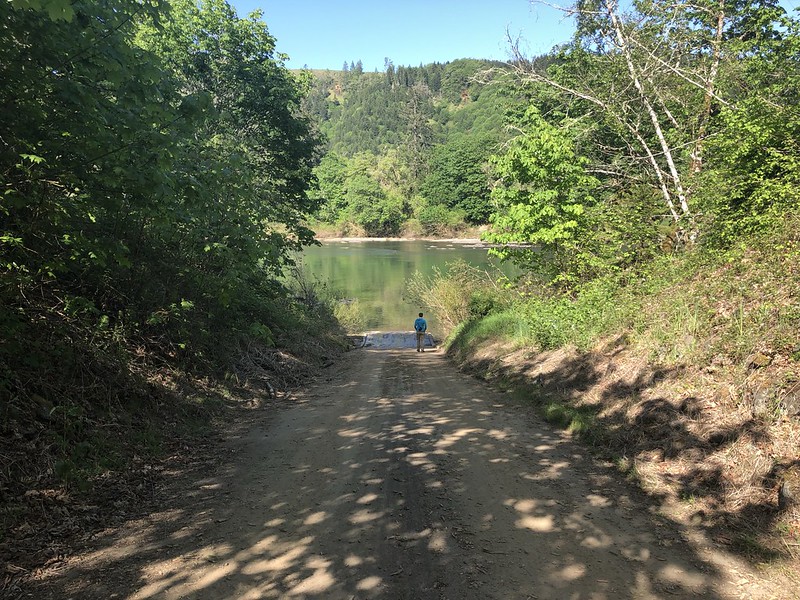 Because the river was so high there was no shoreline for us to walk on, but it was still pretty standing there at the end of the boat ramp: 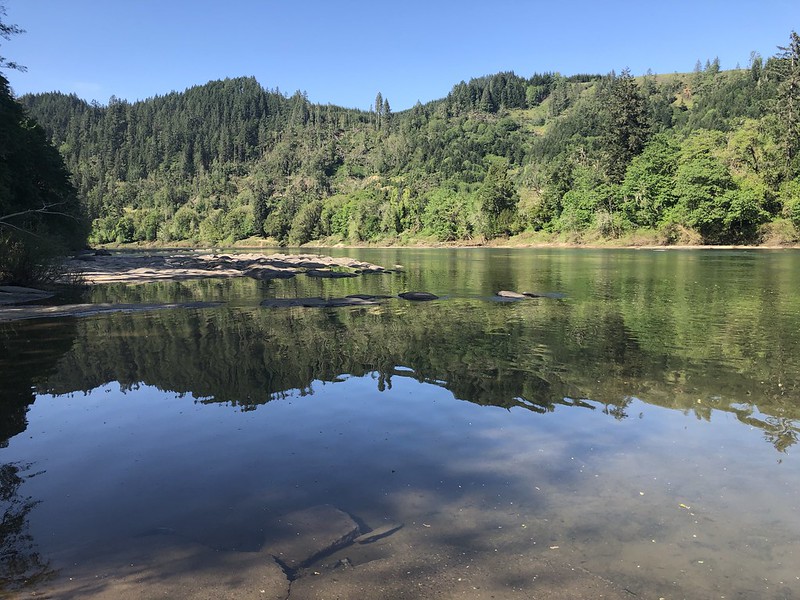 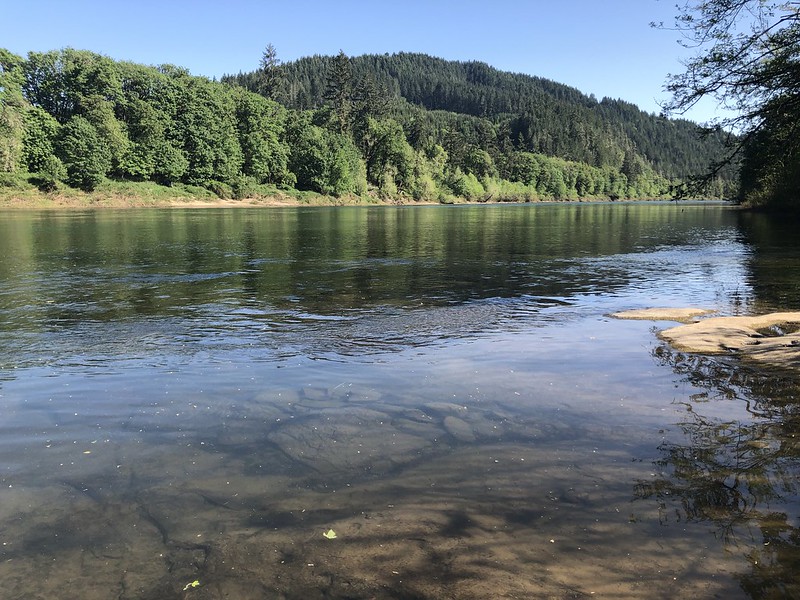 As we drove back to Highway 38 on Henderer we saw this flock of wild turkeys in the grass. Their heads sticking up above the grass totally cracked me up! One of them gave a “gobble” which made my day. 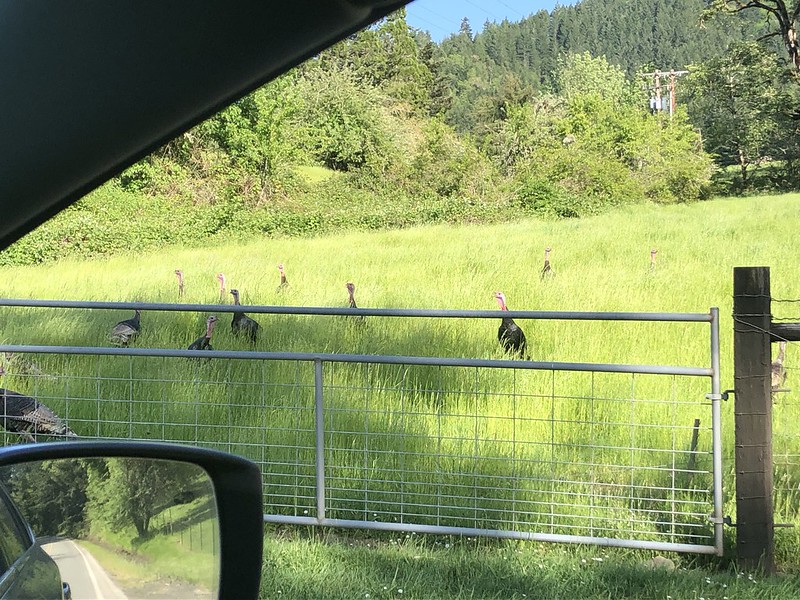 So that was our long weekend at the coast! We were EXTREMELY fortunate to have such good weather. It never rained, and while we had a lot of wind, we also had a lot of sunshine. Four straight days of sunny weather at the coast is pretty remarkable! It was a fun and beautiful weekend.