On the 4th of July we did one last hike before driving home from southern Oregon. In William Sullivan’s book, he recommends a nice 4.8-mile round-trip hike up the Sturgis Fork Trail, then north on the Boundary Trail to an unnamed high point at 6,420′. But, as you will see, we were stymied by a meadow: 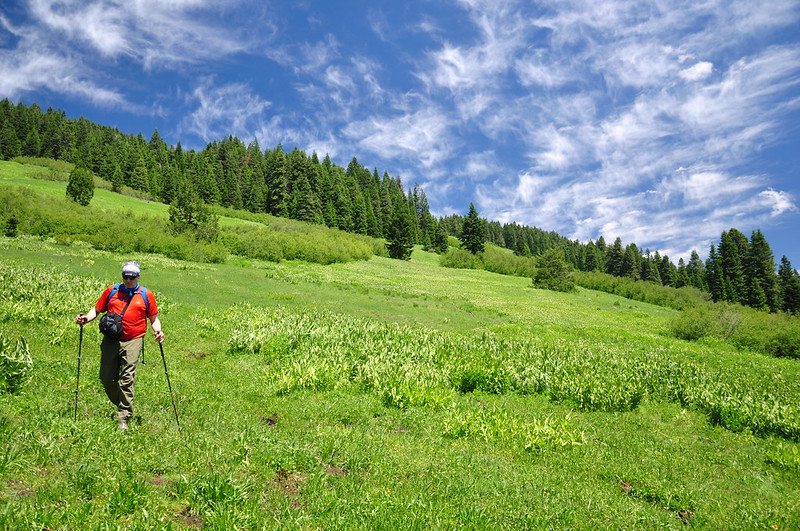 We broke camp and drove south past Applegate Lake where we stopped to enjoy a nice view that included the Red Buttes: 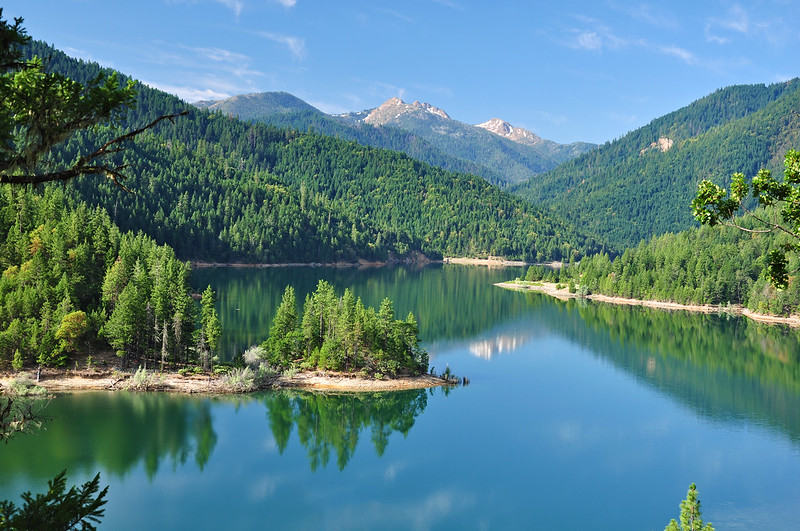 The last half mile of road to the trailhead is horrible. It’s very rough and very rocky. We made it okay in the Outback, but I don’t see how a low clearance car could ever make it up. I was surprised to see a horse corral at the trailhead. I can’t imagine how one would get a horse trailer up here. 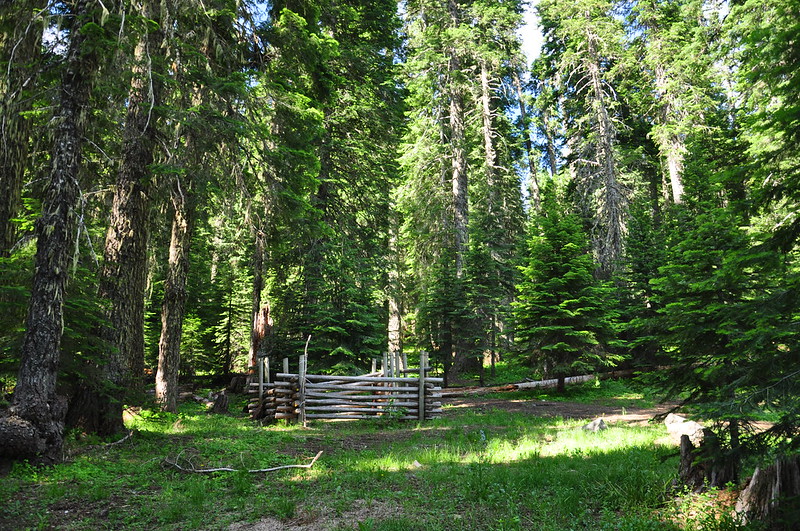 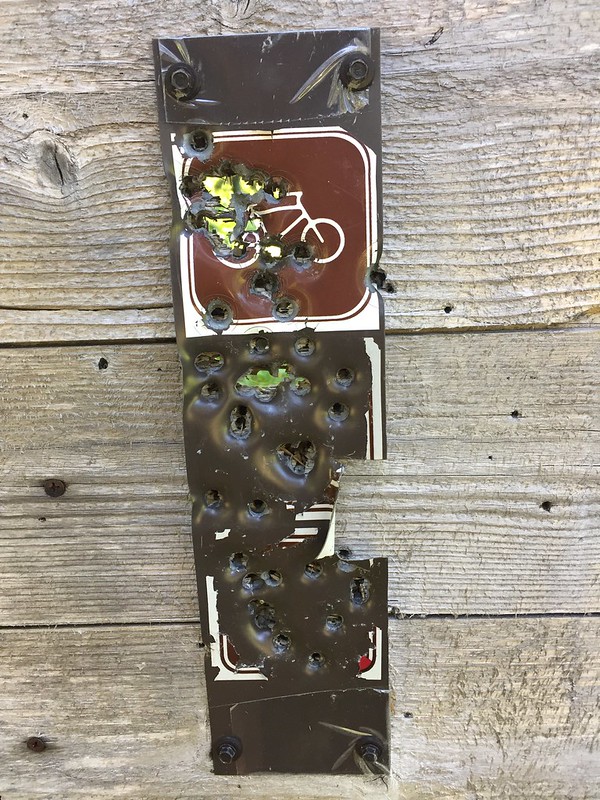 It was a quick uneventful 0.7mi hike up the Sturgis Fork Trail. There was no sign at its junction with the Boundary Trail. Nor was there a sign a quarter mile further along in this little meadow, where apparently the Mt. Elijah trail (#1206) heads off to the left. We did not see any trail at all heading off that way. 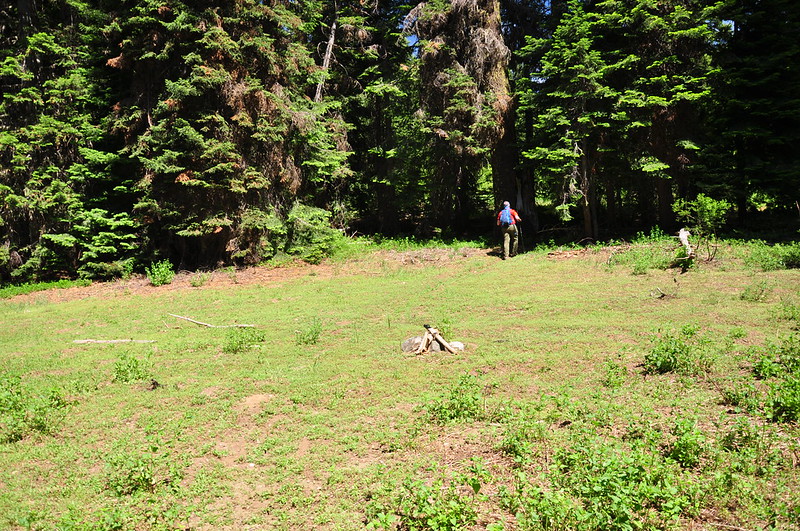 Then we came to this huge sprawling meadow. Unfortunately the trail totally vanished at this point. 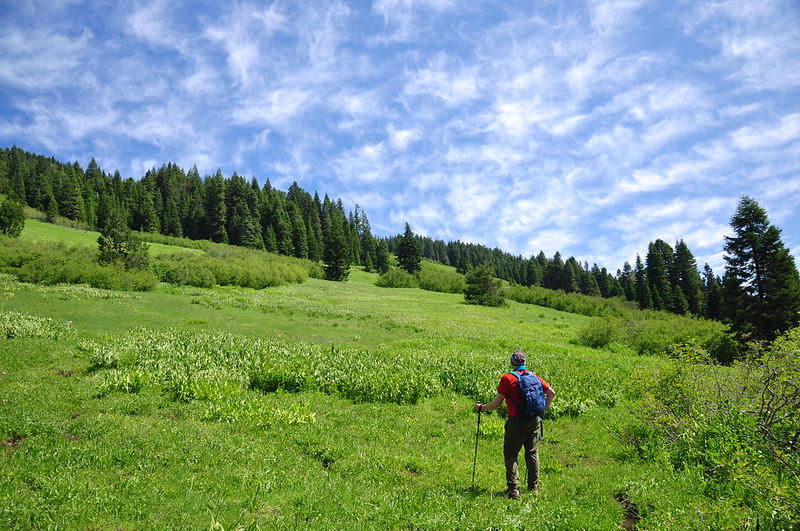 The GPS said the trail went up a bit, then traversed straight across, so that’s what we tried. We ended up on something that looked like it may have been a trail once. But the vegetation was thick, and it was hard to tell. 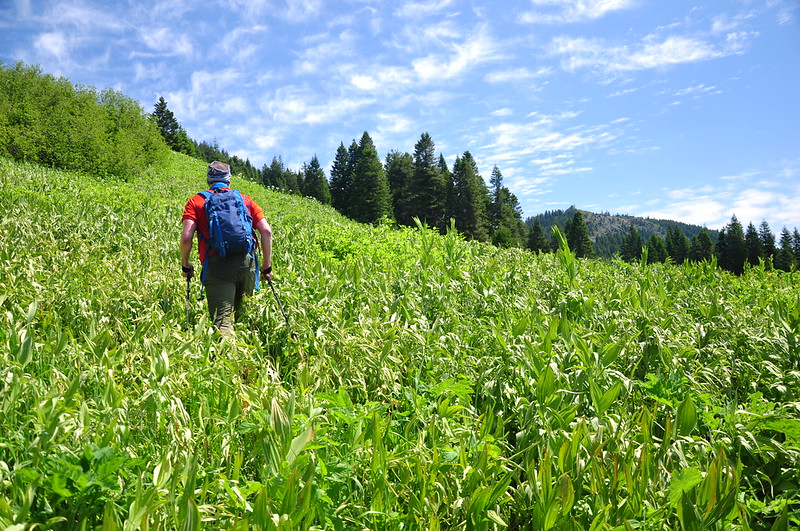 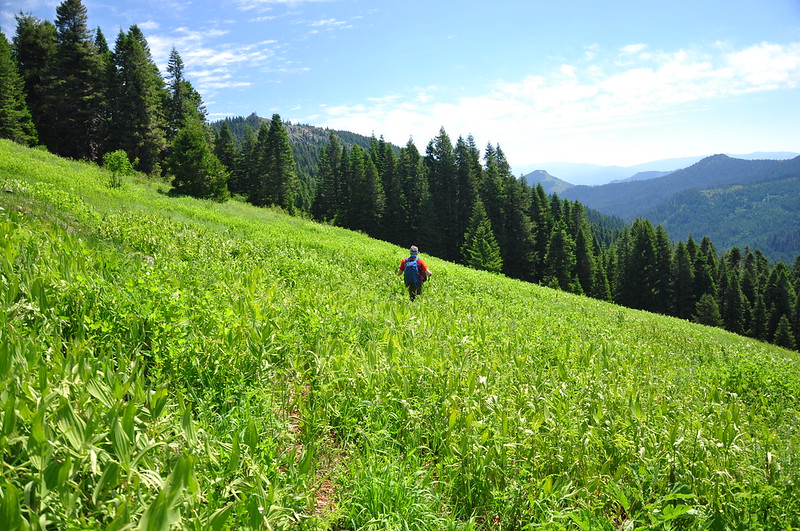 We ended up in some brush and some trees. We crossed a gully with a stream. No pictures were taken during this part of the adventure. According to the GPS we were on track, but there was absolutely no sign of trail here. Then we hit this: 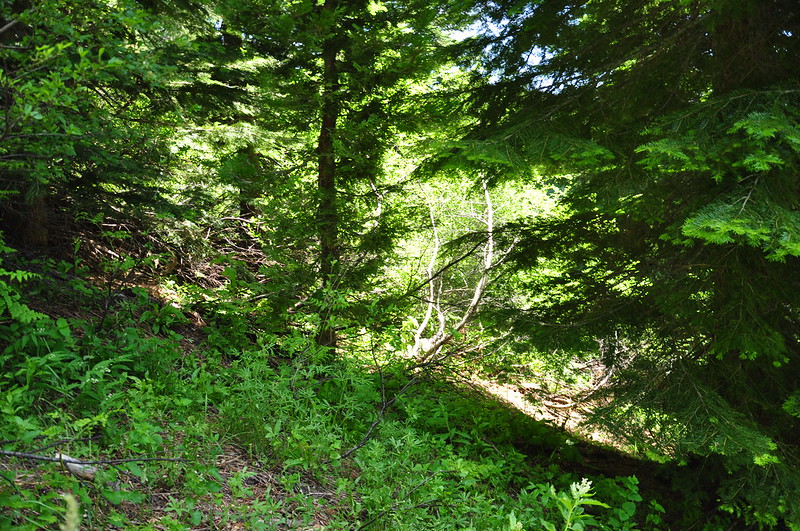 With a thick wall of brush in our way, we gave up. It wasn’t worth it. We went back to the meadow, found some shade from a tree, and sat enjoying the view: 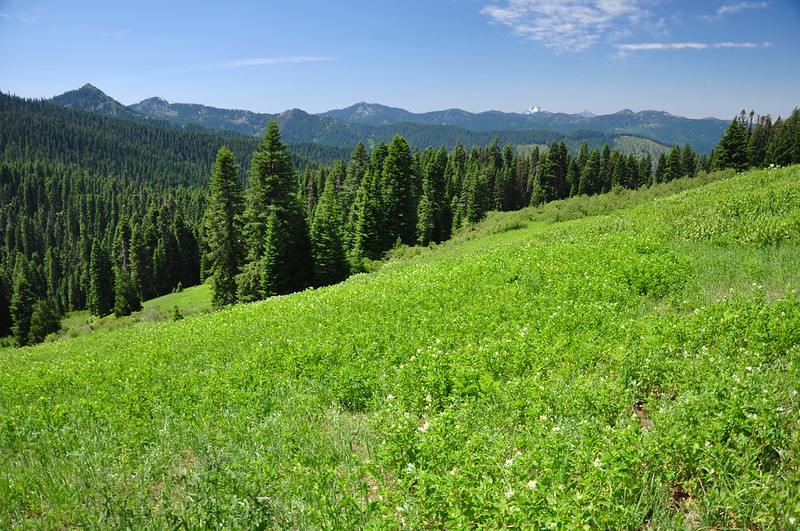 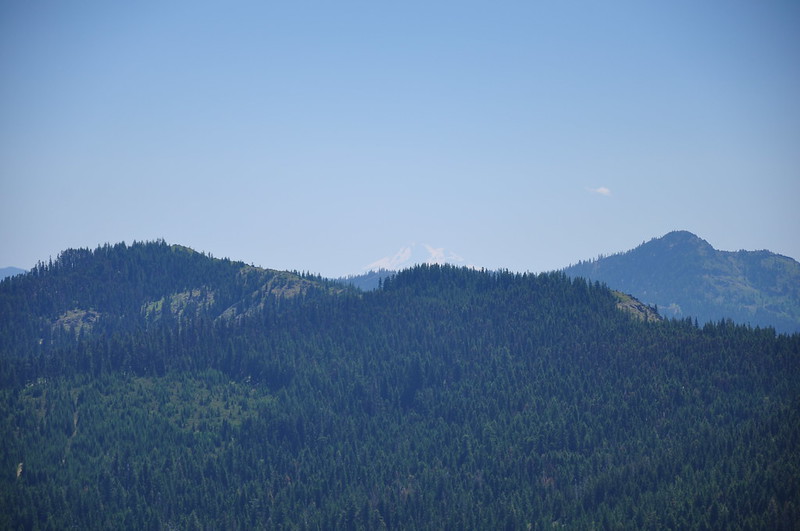 It was pleasant in the meadow, with birds and bees and butterflies, so it was not a bad consolation prize. 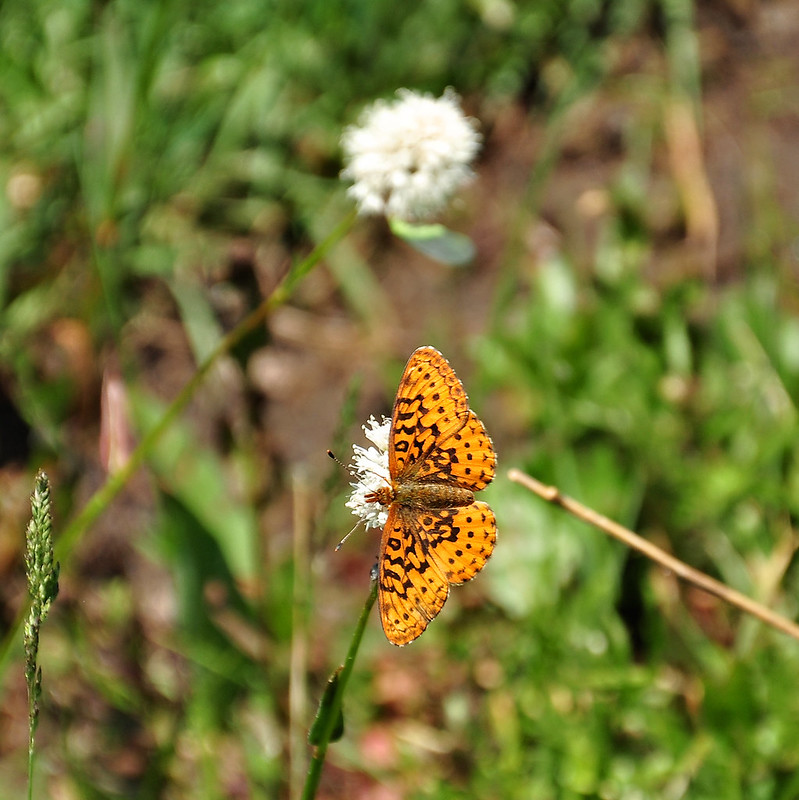 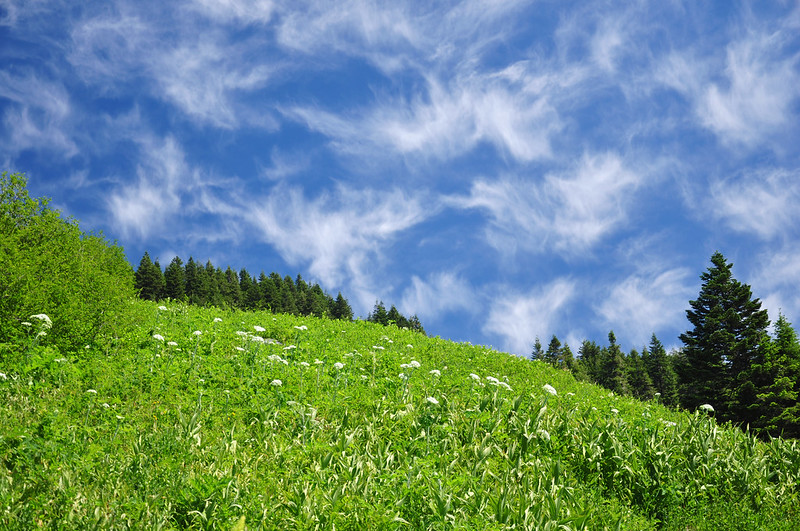 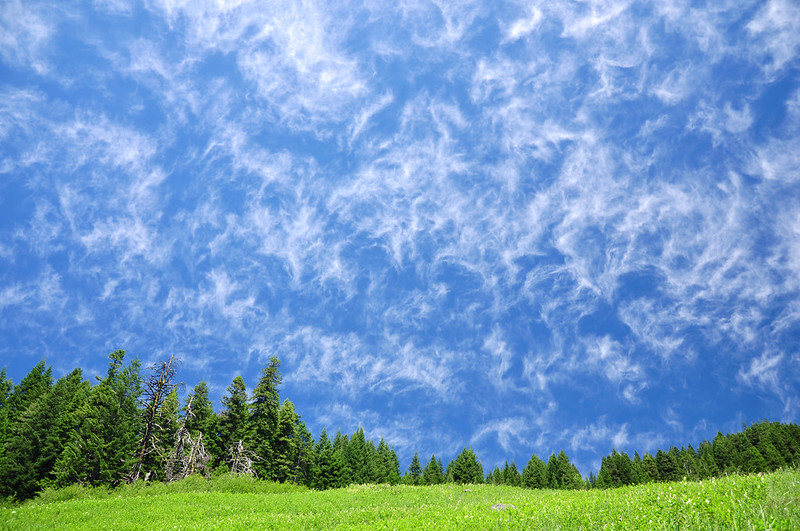 Then we headed back: 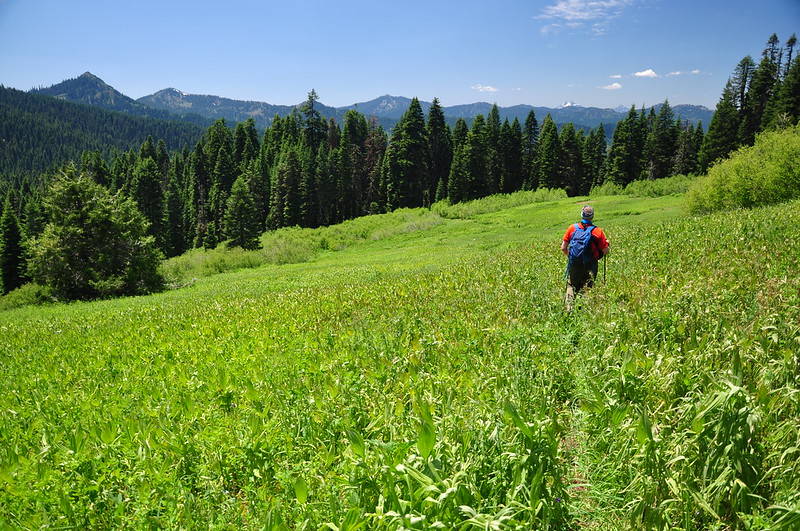 I later learned from a fellow hiker online that the trail on the topo map is incorrect and that the actual trail is a bit further down the slope from where we were. You can see his map here. He also said that even if you’re on the right path, it’s still hard to follow this time of year when the vegetation is obscuring the trail.

I did a track on the way back, starting from our lunch spot. You can kind of see on the satellite view the trail below us. 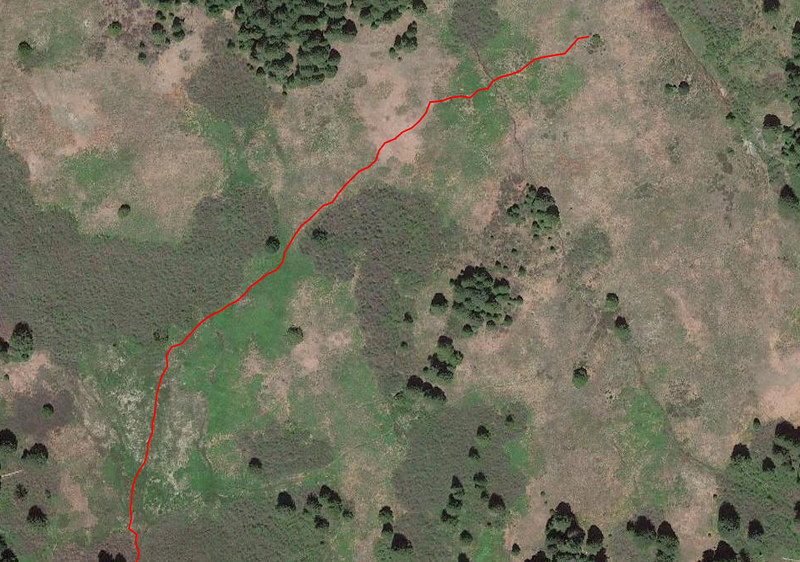 When I first learned about the Boundary Trail on this trip I thought it would make a cool backpacking route. But now I’m not so sure. It’s certainly scenic, but signage and maintenance seem sporadic.