On New Year’s Day Greg and I went snowshoeing at Edison Sno Park, which is a few miles south of the Cascade Lakes Highway on Road 45. It was a bit of a white knuckle drive due to low visibility, questionable road traction, and several cocky drivers, including a giant jacked-up pickup coming at us in the opposite direction in our lane while passing. Going way too fast and driving way too recklessly for the conditions. Good grief.

Anyway, it was a relief to get out of the car and hit the trail. 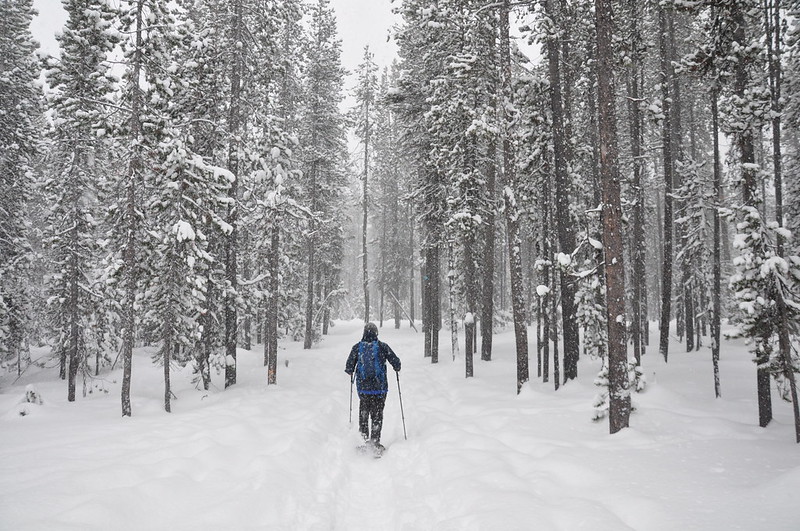 It was a winter wonderland out there with all the snow. 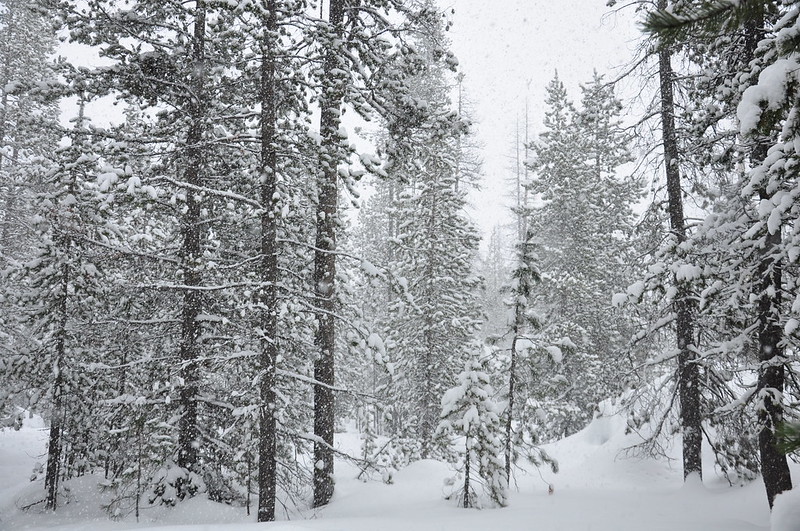 I’ve never snowshoed on the east side of the Cascades before and I was delighted by two things over there: 1) how the beautiful red ponderosa bark looked in the snow and 2) how fluffy the snow is! Snow on the east side is fun snow, not the awful sticky icy junk we get here in Portland. 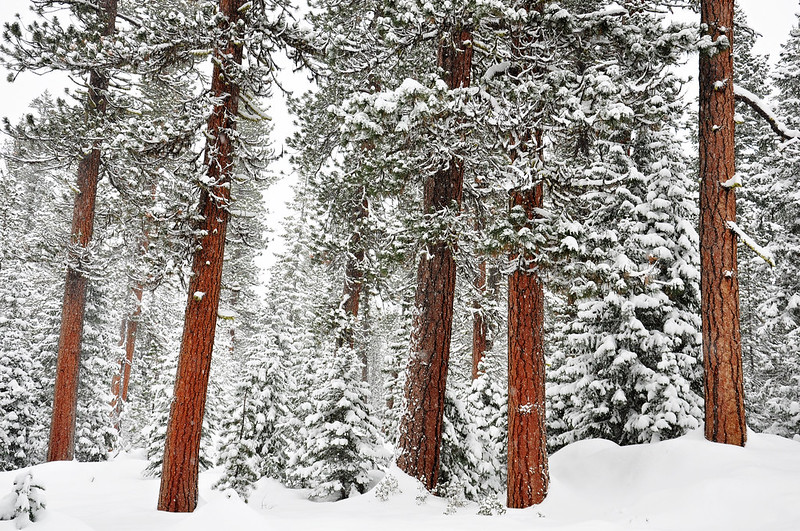 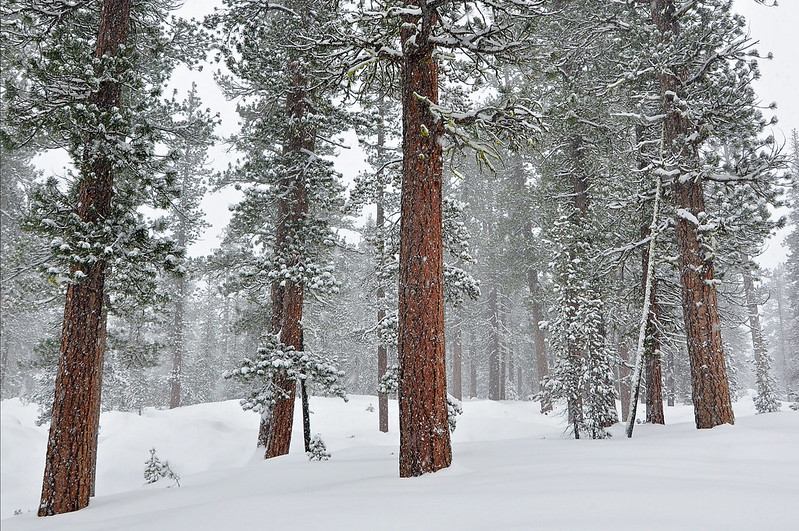 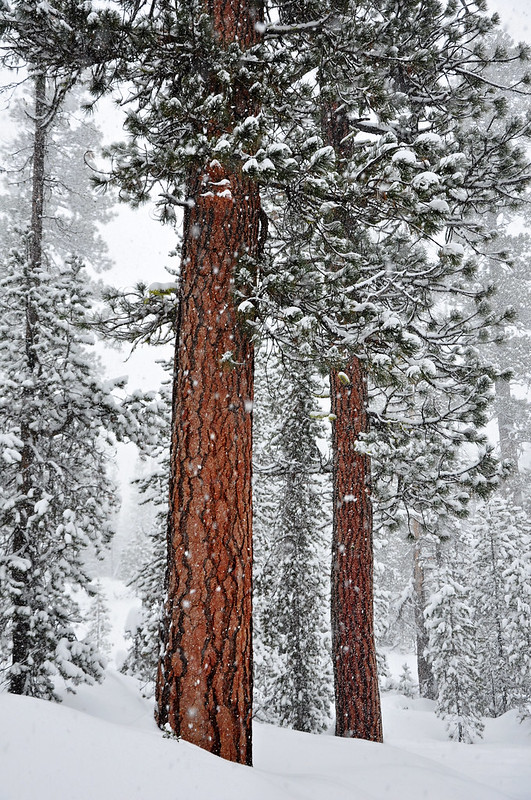 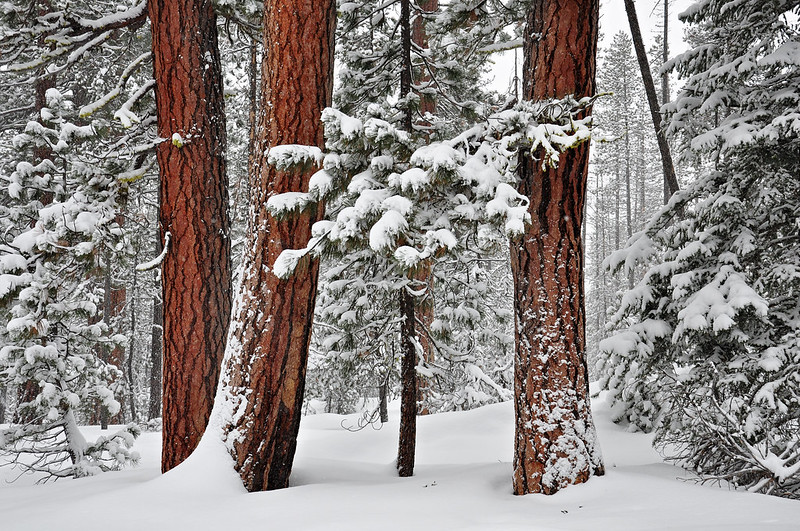 The network of trails at Edison is quite a maze. It’s actually quite confusing. Some junctions are signed and some are not. 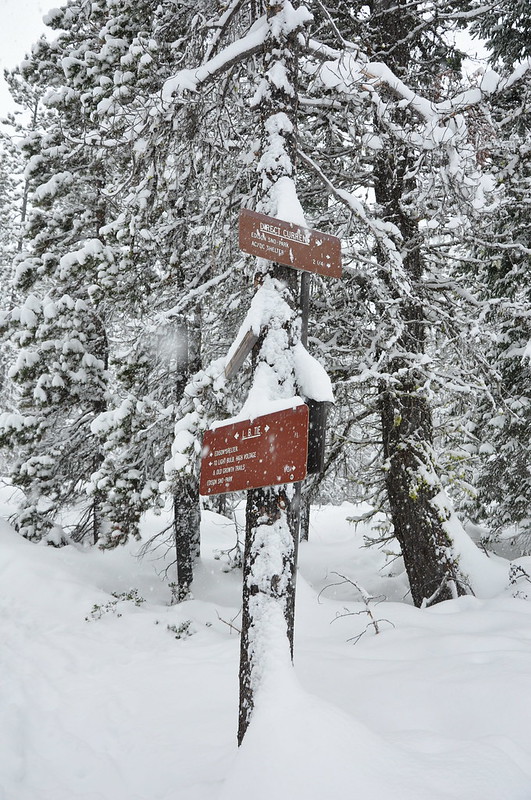 We managed to navigate our way to the Edison Shelter, which had an impressive amount of snow on the roof. 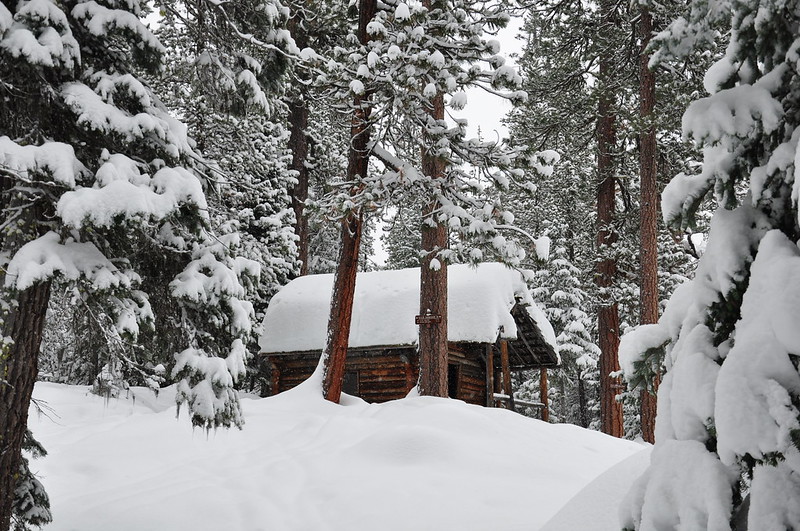 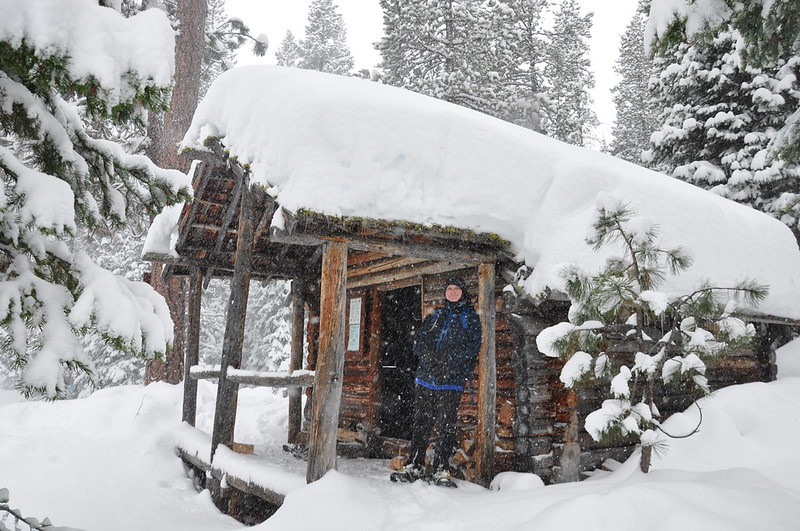 We sat inside enjoying the warmth of the stove and the view out the door to the snowy forest beyond. Don’t let the people-less photos fool you. We saw over a dozen people while we hung out here. 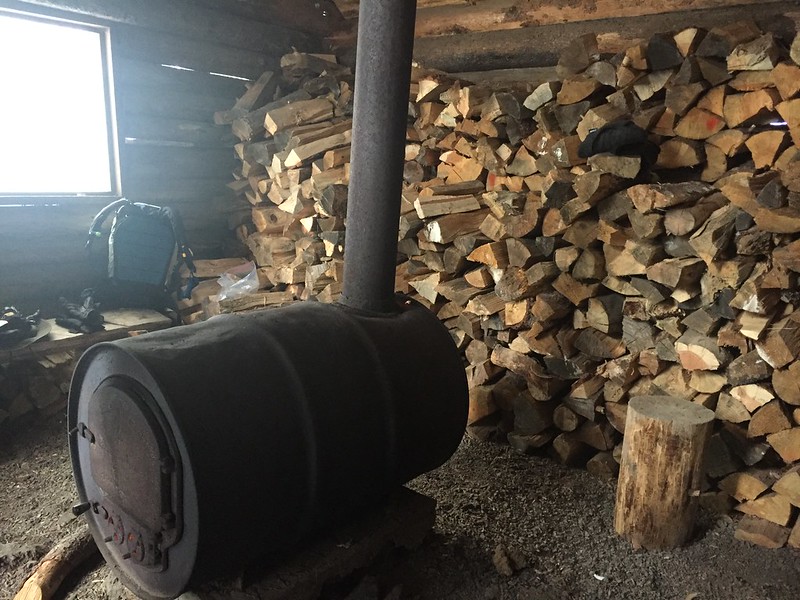 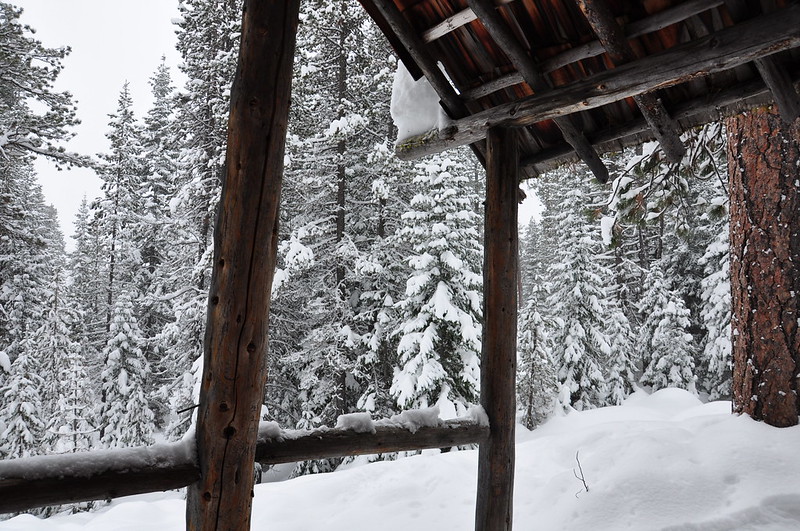 It was unclear which trail we needed to finish our loop back to the parking lot, so we followed a sign that said 1.5 miles to the sno park. Along the way passed this massively weird snow mound. I’m guessing there’s a pile of lava or boulders under there. 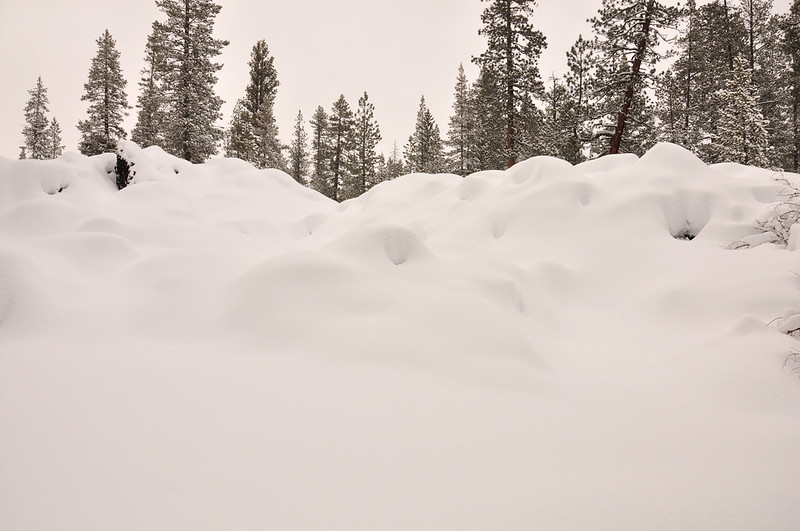 I think we did about 3.5 miles or so and I couldn’t tell you which trails we took. Next time we’ll bring the GPS. The map on the Forest Service page is only so-so, but there’s a better map here.

We enjoyed some beer in Ben before heading back to our cozy Airbnb cabin. 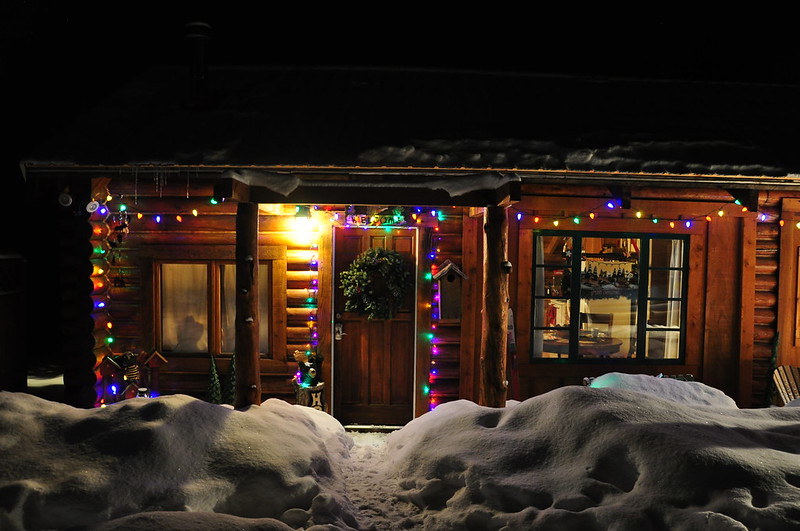 BTW, we had an interesting time getting home on Monday. We had considered doing the Tumalo Falls snowshoe before heading home, but Greg had a committment in Portland in the evening and we didn’t think we had enough time. Turns out we were right. It took us just under six hours to drive from Bend to Portland via Highway 20/22. Most of the time we were going about 30 MPH due to the heavy traffic and the snowy conditions. Sure was a beautiful drive, though, with the fresh snow on the trees. 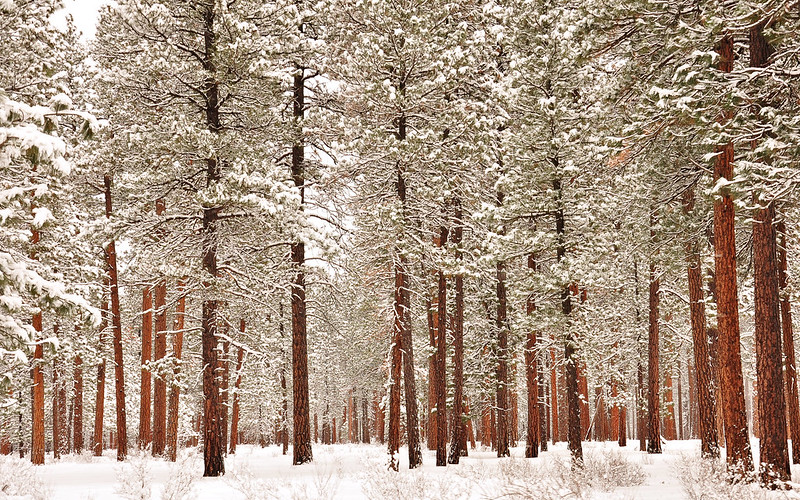 Our AutoSocks did great, although after so many miles (we put them on near Black Butte and took them off just after Detroit Lake) they are starting to show wear. Might only get one or two more uses out of them. 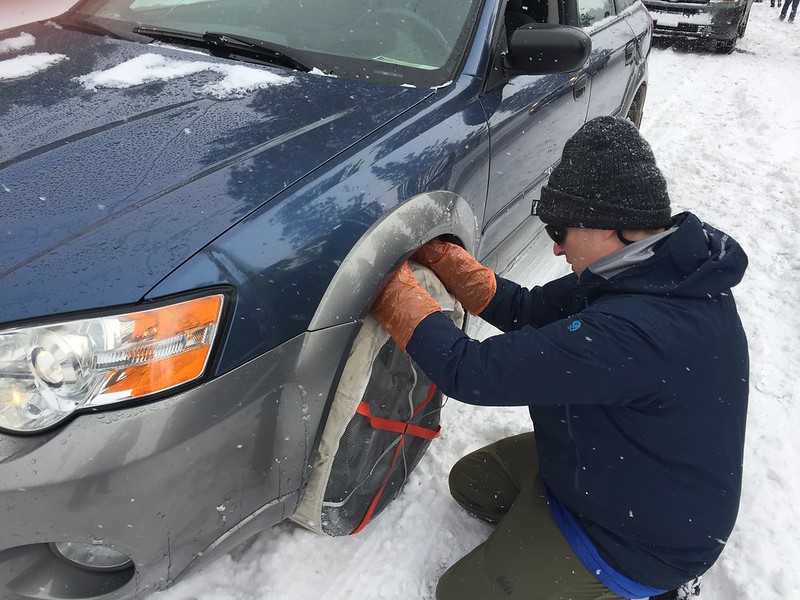