The campsite at Denny Creek Campground was only ours for one night, so we packed up camp this morning (royal pain in the ass) before heading over to the trailhead to start hiking. Our destination was Pratt Lake but the Granite Mountain hike also starts here and it’s VERY popular. There were at least 100 cars at the trailhead.

We started hiking at 10am. I’ve never seen ranger reports at trailheads before, but I like it. I wish more forests did this. 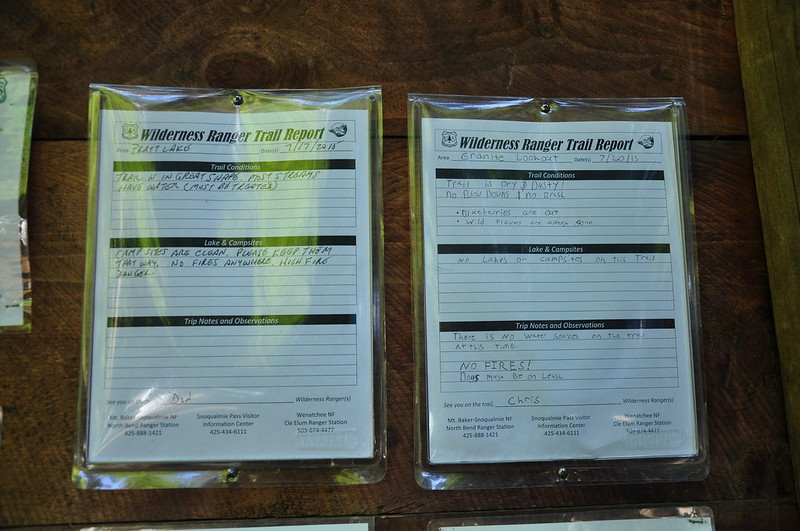 At some point along the trail is this long boardwalk: 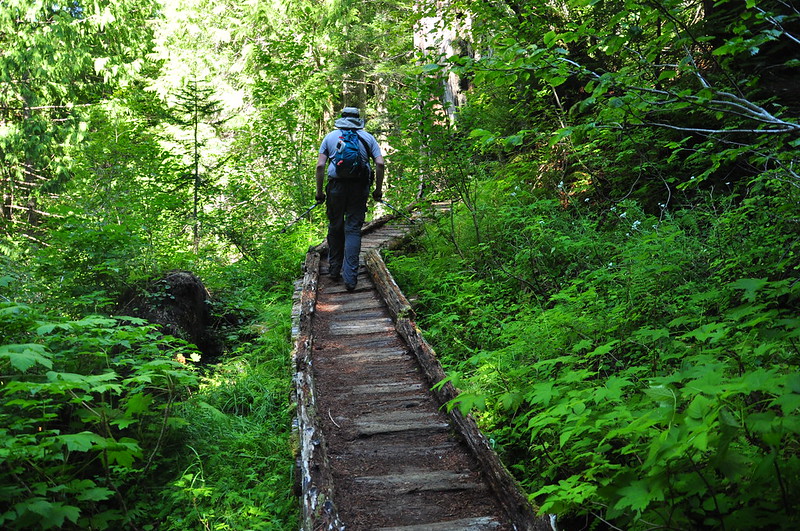 About 10 seconds after I took that picture I was about a third of the way across when some trail runner came blasting up behind me. He asked if he could pass and I said I would let him pass once we were off the too-narrow-for-passing boardwalk. He told me he was trying to win a $500 race and I repeated what I’d said before. Learn some trail manners, jerk. I’m not falling off this boardwalk so you can win $500.

For the first four miles of trail we were stuck in the forest with nothing to see. It’s an extremely uninteresting stretch of trail and I was starting to get antsy. We got a tiny view of Olallie Lake and Mt. Rainier through the trees, but that was it. 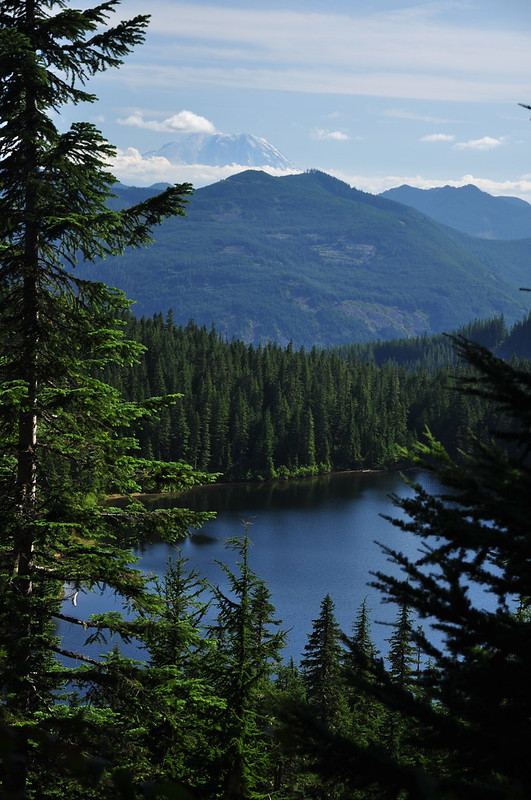 Near that spot was a patch of fall color on a rock slide. No! I’m not ready!! 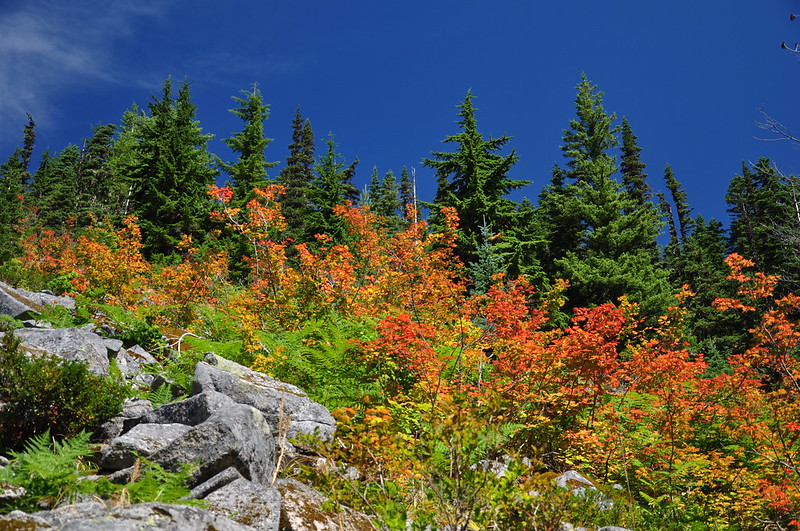 We encountered some bizarre discrepancies in our hiking books that we could not reconcile with reality. In the third edition of 100 Hikes in Washington’s Alpine Lakes the authors mention a spot at three miles called Lookout Point. In Day Hiking: Snoqualmie Region the author says “At around 3 miles you’ll find a fine viewpoint at 3400 feet. Pause to take pictures of the Snoqualmie Valley and the peaks above the Olallie, Talapus, and Pratt Lake basin.” Sounds like a mighty fine view, not one that would be easily missed. And yet we saw no sign of this viewpoint. Weird.

After two hours and four miles we reached a junction with the Mount Defiance Trail where we expected some views. The authors of 100 Hikes mention a “view south to Mt. Rainier at a junction with the Mt. Defiance trail.” They also have a picture looking down on Pratt Lake from the “4150-foot saddle” which in the text is described as being right before the trail junction. 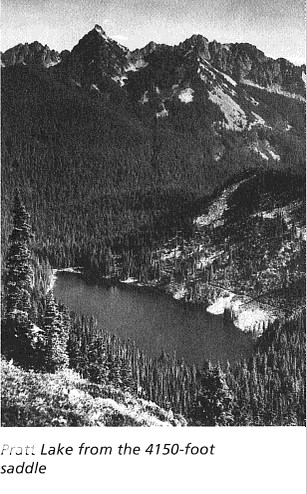 We saw no views in any direction and it seems like it would be physically impossible to see Pratt Lake and those mountains from this spot. The angle is all wrong. In any case, all we saw was a wall of trees: 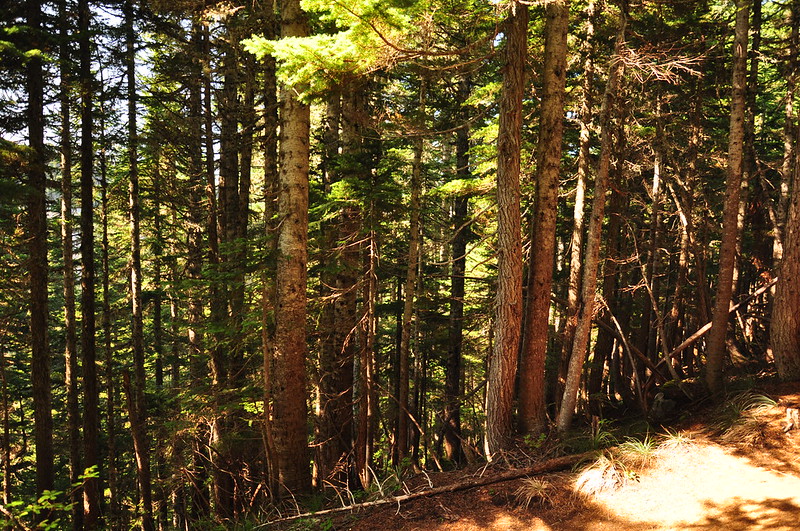 From the saddle the trail goes down, down, down into the lake basin. This section of trail is rough and rocky and it makes for slow going. I took this picture of Greg ahead of me on the climb back out of the lake basin later: 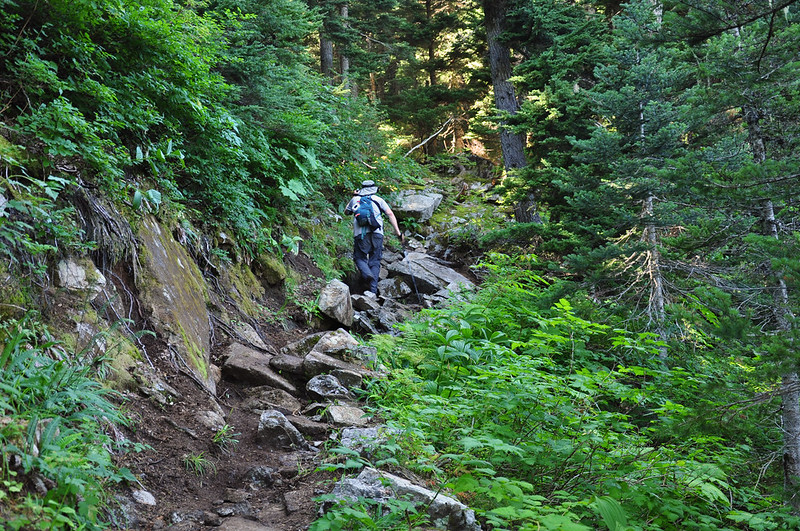 FINALLY we had some views, looking down into the lake basin (trees block the view of the lake from here) and pointy Kaleetan Peak (kaleetan is Chinook jargon for “arrow”): 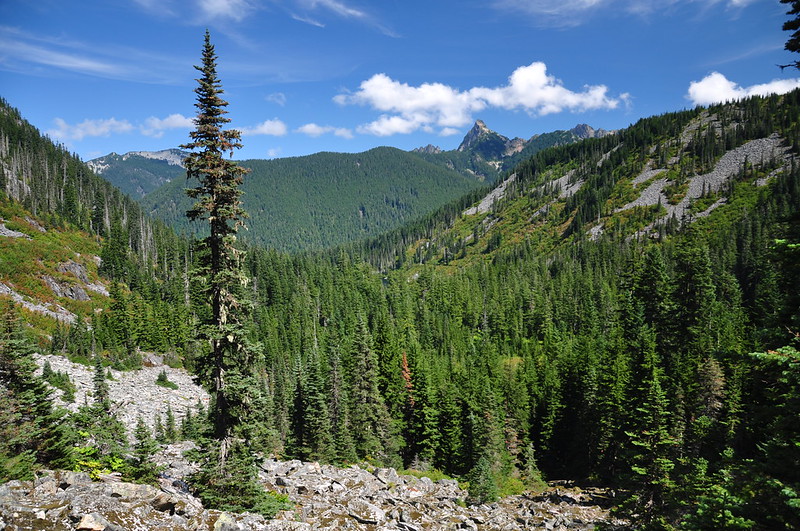 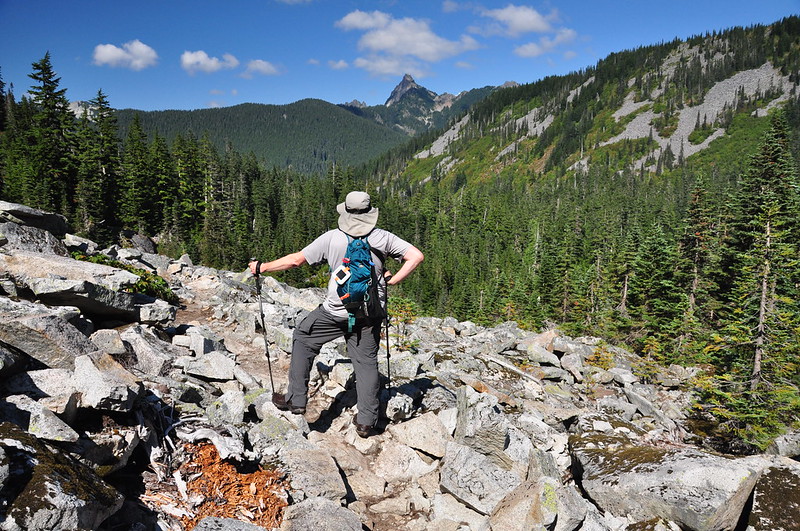 Just before the lake the trail passes through a lush green forest with a lot of moss. 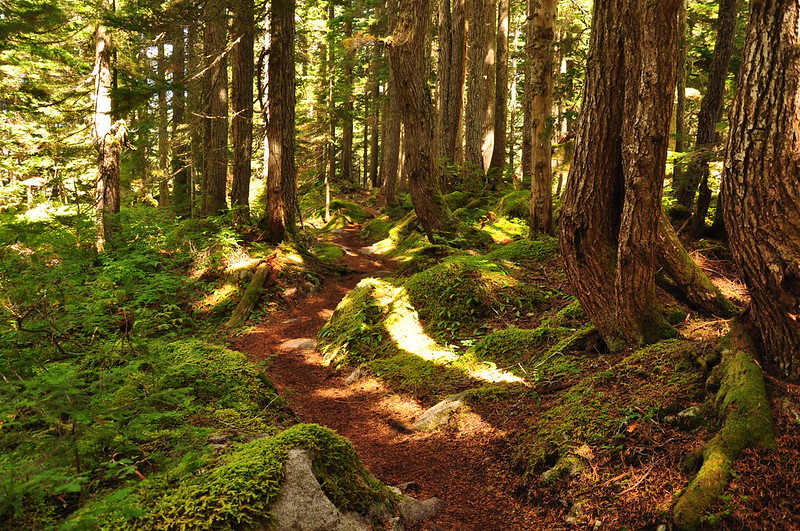 The trail traverses the slope above the eastern shore of the lake. 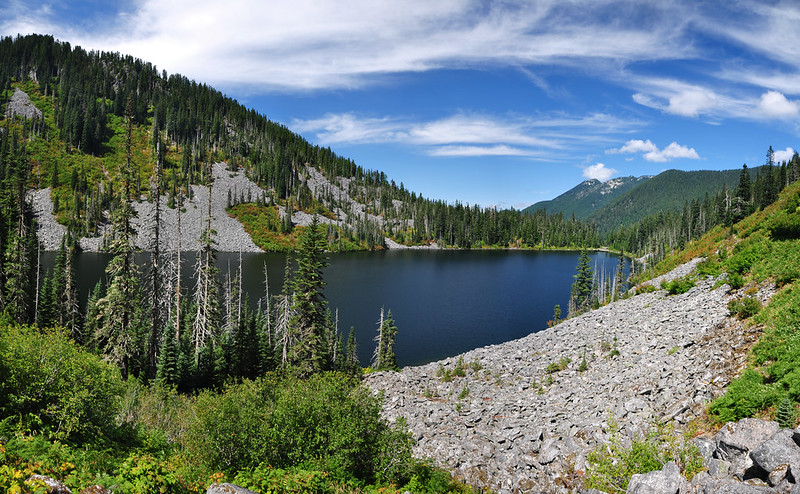 The day use area and campsites are at the far end, where had a nice view down the lake. This lake was named after Mountaineers member John W. Pratt of the Seattle Post-Intelligencer. 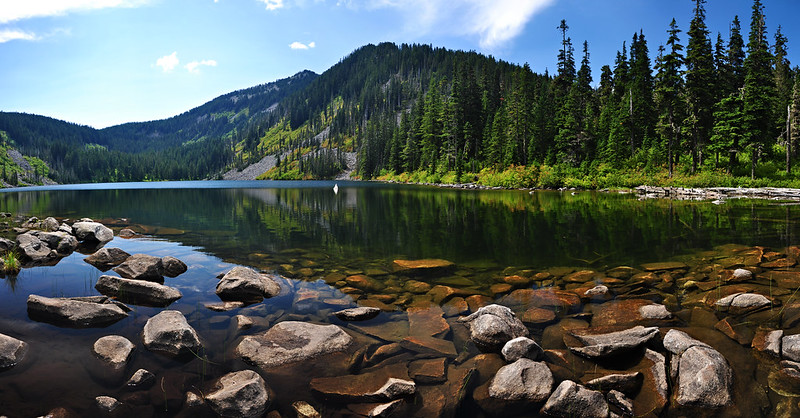 We sat and rested for awhile and then I decided I wanted to go half a mile further down the trail to see Lower Tuscohatchie Lake. Greg decided to stay at Pratt Lake and chill out. Almost immediately I was pleased with my decision to explore further as I encountered a nice mountain view from the trail: 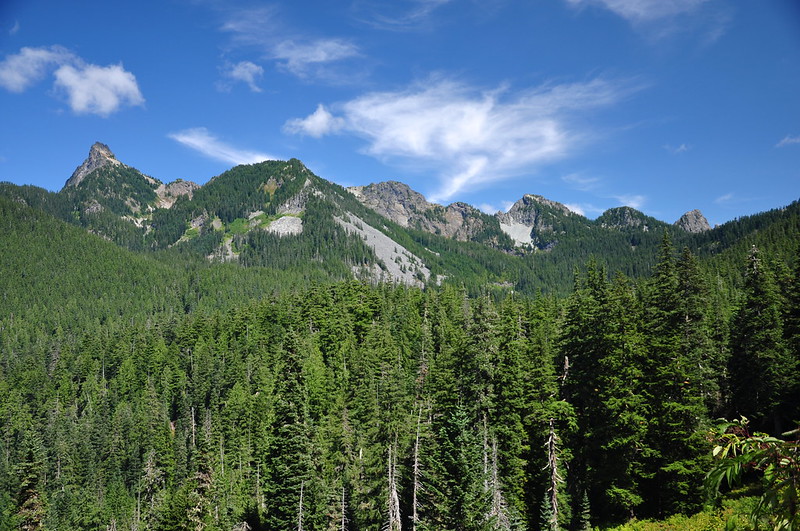 Looking down the valley of the Pratt River: 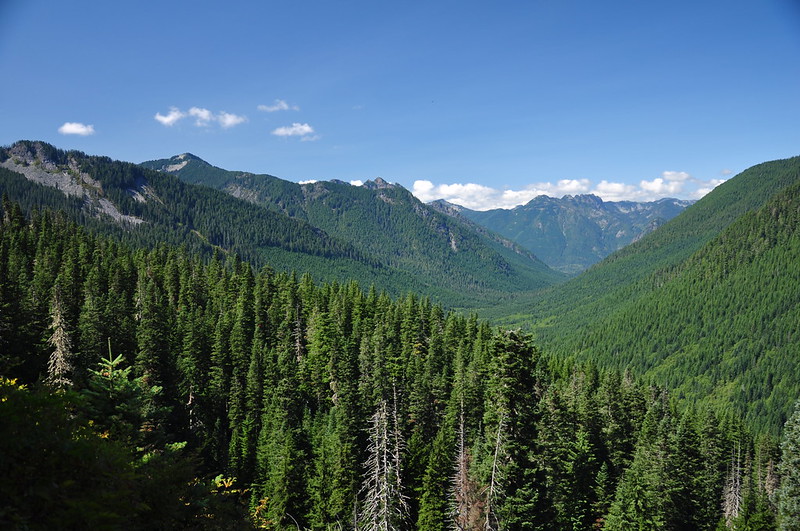 The trail crosses a logjam at the outflow of Lower Tuscohatchie Lake via a bridge. 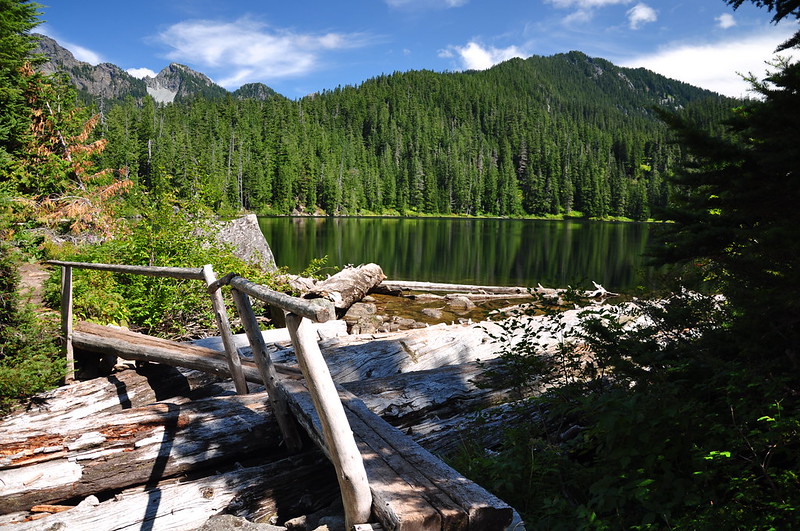 I went out on the logs for a good view and was not disappointed. Pratt Lake is pretty, but this one is more beautiful. The name may come from the Muskogian Indian name for “stream of the warrior” (“tushka” is warrior and “hachi” is a stream”.)

I reunited with Greg back at Pratt Lake and at 3pm we began the long long slog back the car, getting back at 6:30. It was a 13-mile day for Greg and a 14-mile day for me. I was so sore and tired and just wanted to eat dinner and go to bed. But the Denny Creek Campground was full and it looked like we might be homeless for the night. Fortunately the camp host let us stay in the large “multi use” site. It was a huge non-reservable group site and had the longest picnic table I have ever seen. 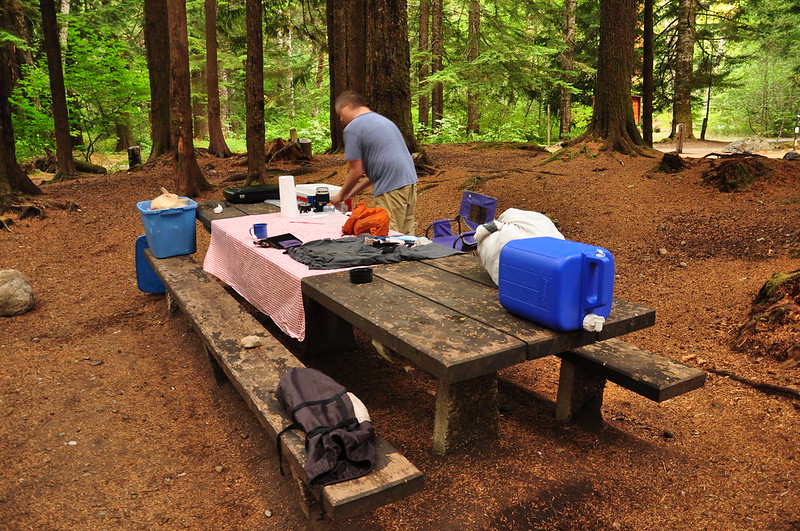