Jefferson Park is one of my favorite places on earth and for a variety of reasons I haven’t been there since 2011. So with the beautiful forecast Greg and I headed there this weekend. This is the first time we’ve gone there in July and it will be the last. Best to wait until the bugs are gone. 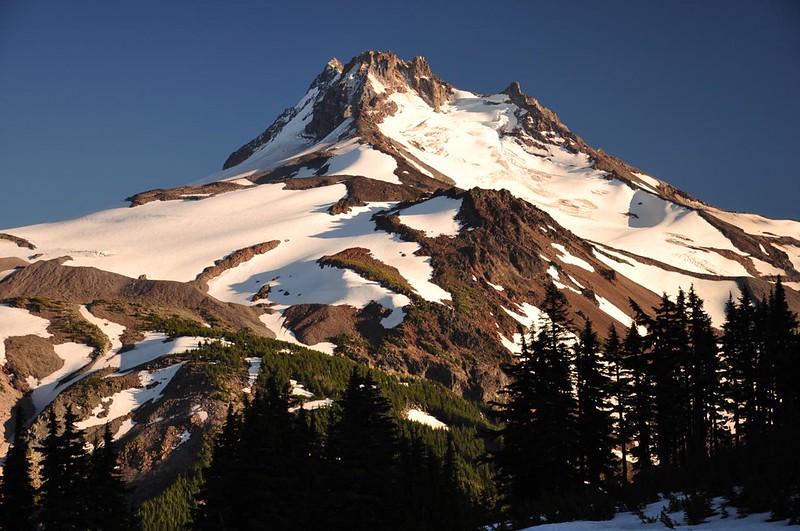 We got a later start than we planned on Saturday morning and didn’t get to the Whitewater trailhead until 11:20. We counted 43 cars!

We hiked past quite a lot of bloomed-out beargrass. Looks like it was a good year for it here….about three weeks ago. 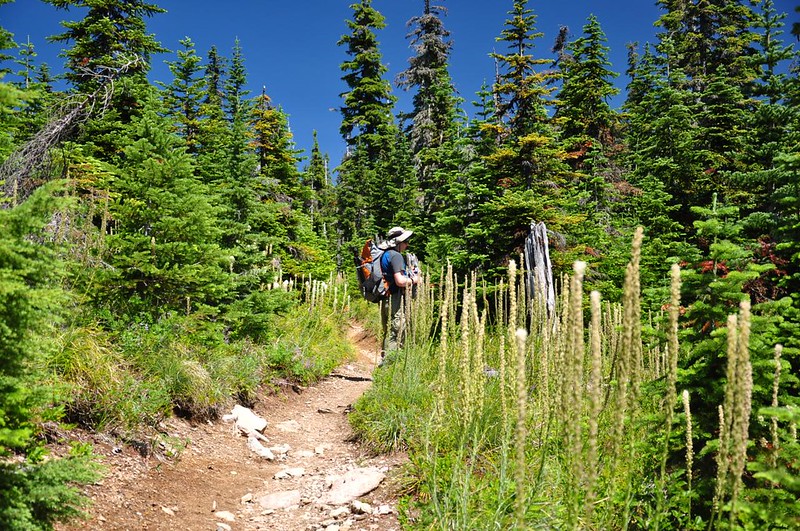 Loved the up-close view of the mountain as we hiked. 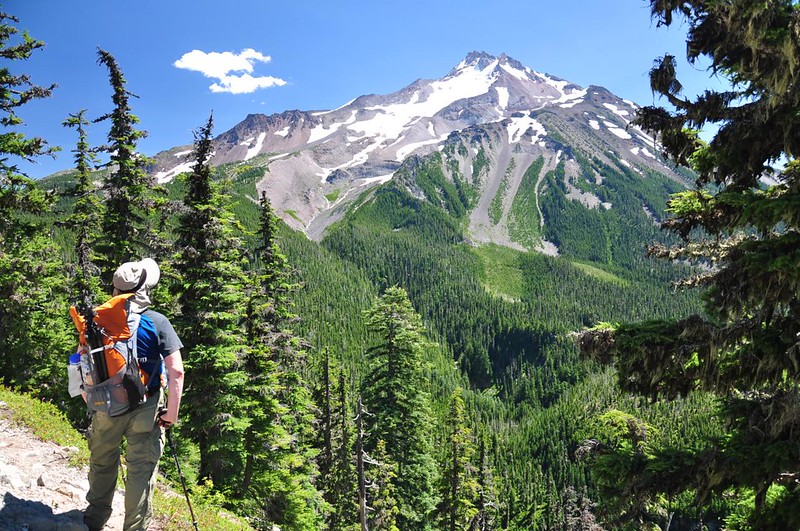 Whitewater Creek was a welcome and refreshing site on this hot afternoon. 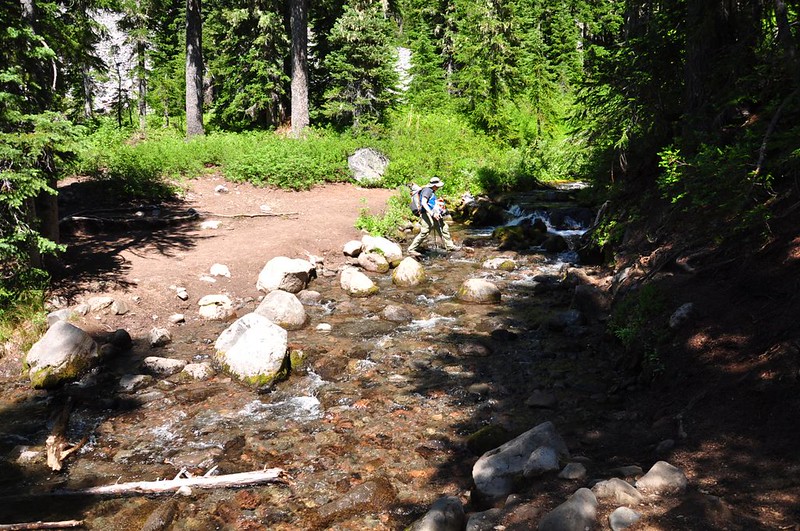 About a mile before Jefferson Park we ran into a wilderness ranger, an experience so rare that I’m not even sure this has ever happened for me before. He reminded us to camp in designated sites only (marked by posts) and that no campfires were allowed. He had been up about two weeks before and dismantled 15-20 fire rings around Scout Lake alone. He said that one time he had encountered two different groups camped in the rain who had built a fire to stay warm, but in the process of doing so just got even more cold and wet, and of course the fire didn’t burn very well. Good grief, people.

We got to Jefferson Park about 3:30 and started looking for a campsite, accompanied by thousands of mosquitoes. We were worried about finding a site, after seeing all those cars at the trailhead. Fortunately we grabbed a spot at the southwest tip of Scout Lake. We quickly discovered why no one was camped there: it was a large site but almost none of it was flat!

I went on a quick jaunt along the shore of Scout Lake to see if there were any better campsites, but there weren’t. Nice view though! 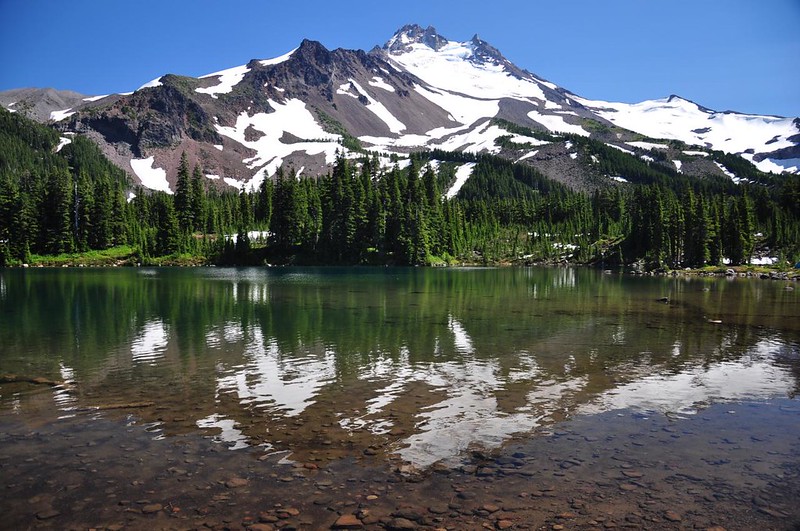 Saw plenty of people not camped in designated sites, including two tents right by the lake shore. We didn’t see those tents later, so I’m assuming the ranger asked them to move.

Rather than tromp around to the other lakes with our heavy packs we kept our sloping site and squeezed our tent into a tiny piece of flattish ground amongst the trees. Our original plan had been to grab a site and then head up to Park Ridge. But due to our late start it was now after 4:00, plus Greg’s foot was bothering him. He would not be deterred, though, so we headed up.

Jefferson Park is still dotted with snow patches, some of which you have to cross. The melting snow has converted the trail into a long puddle in some spots. 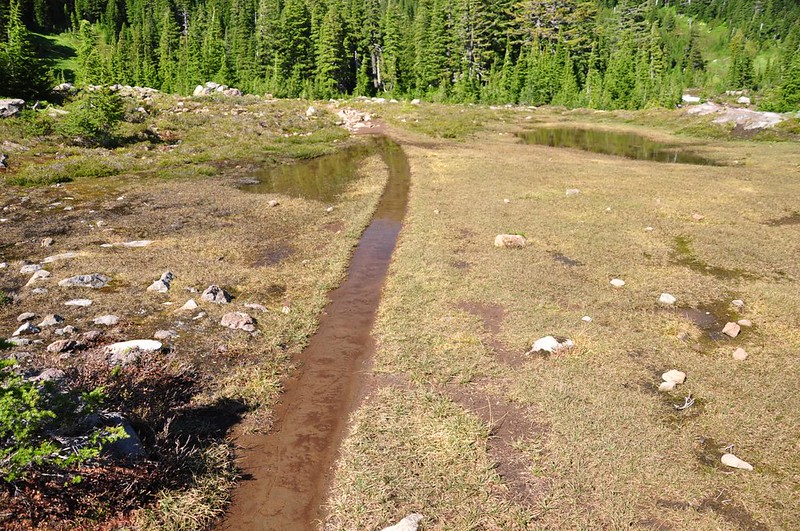 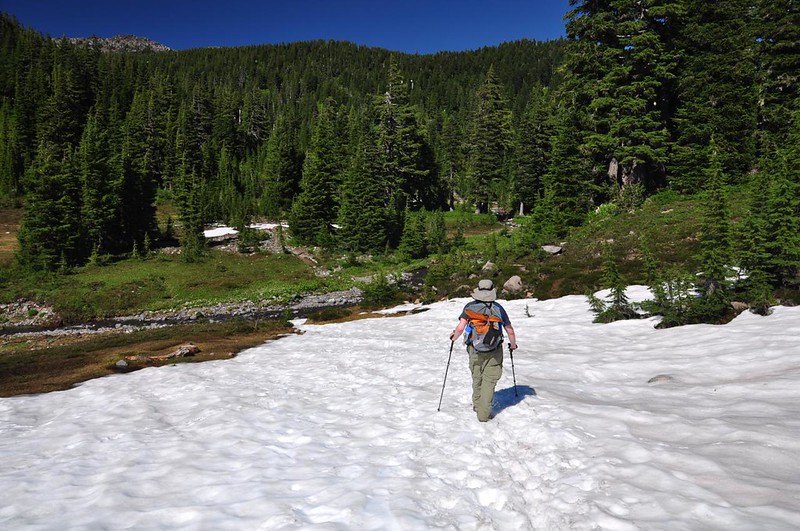 The wildflowers are JUST getting started. We saw some paintbrush and heather in bloom, but no lupine. Usually the bugs and the flowers occur at the same time, so the fact that we had to suffer the mosquitoes without the benefit of the flowers felt like a gip! 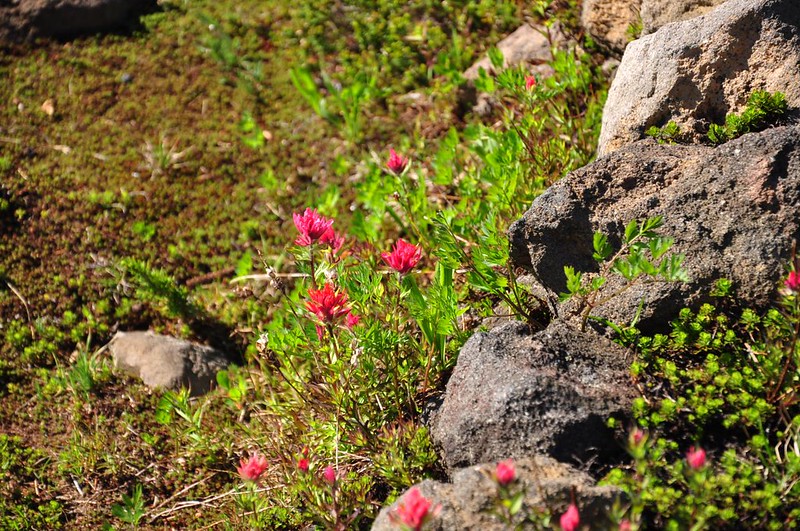 Up we climbed, looking back occasionally to see the mountain. 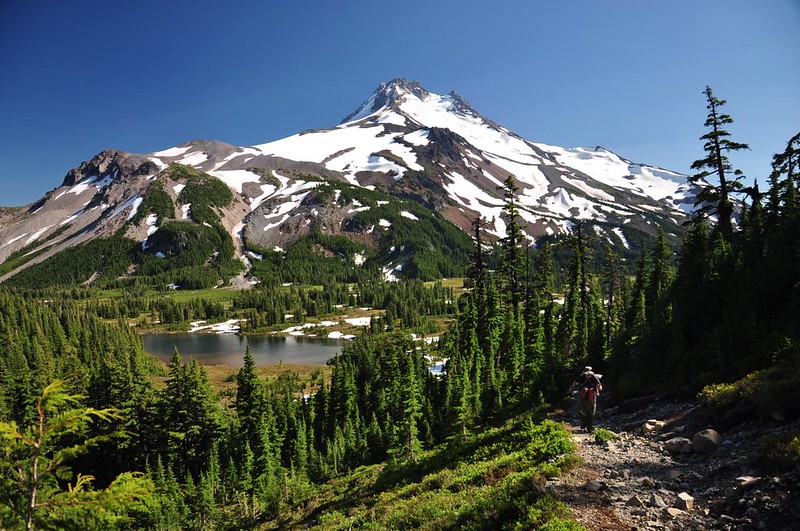 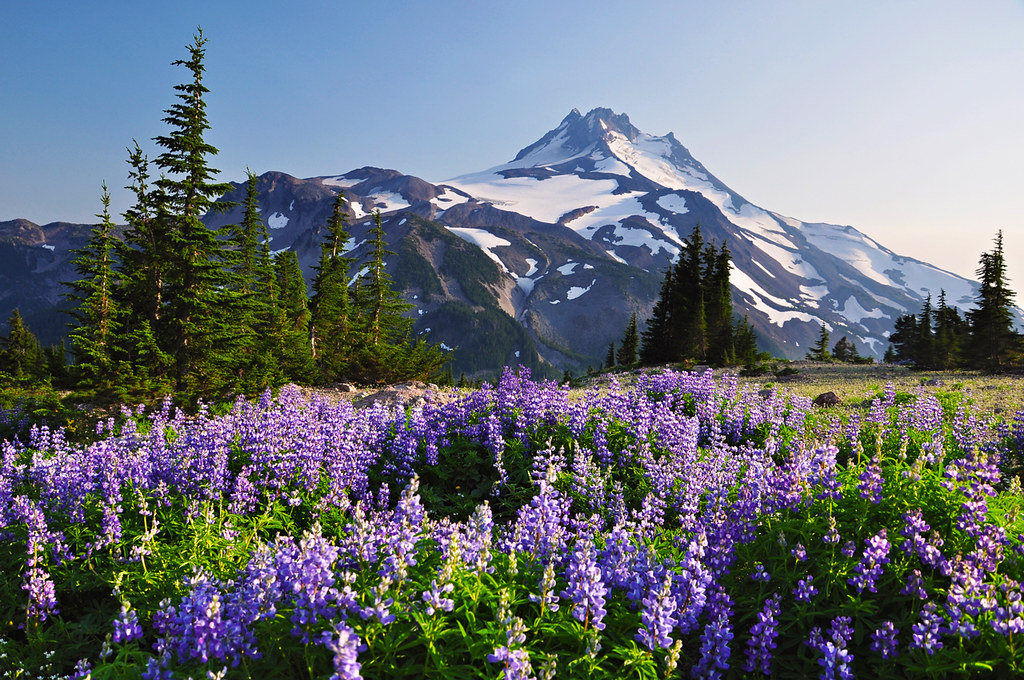 Roughly the same spot this weekend: 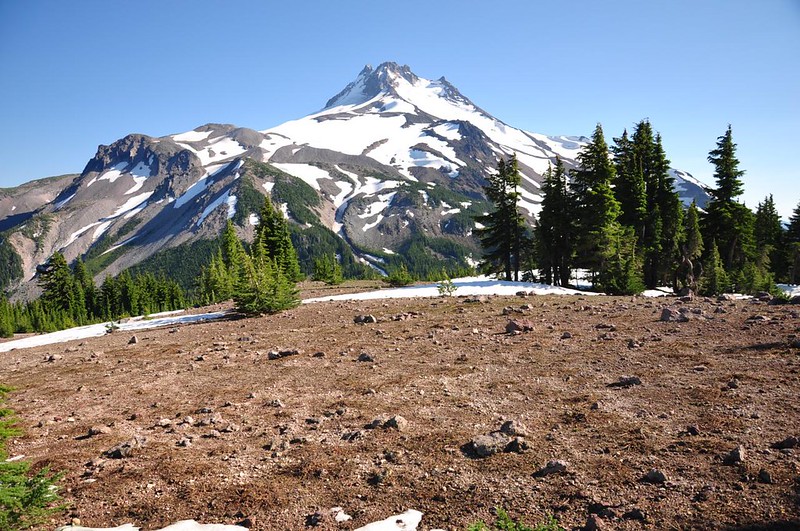 Greg hiking across one of the many huge snowfields we encountered: 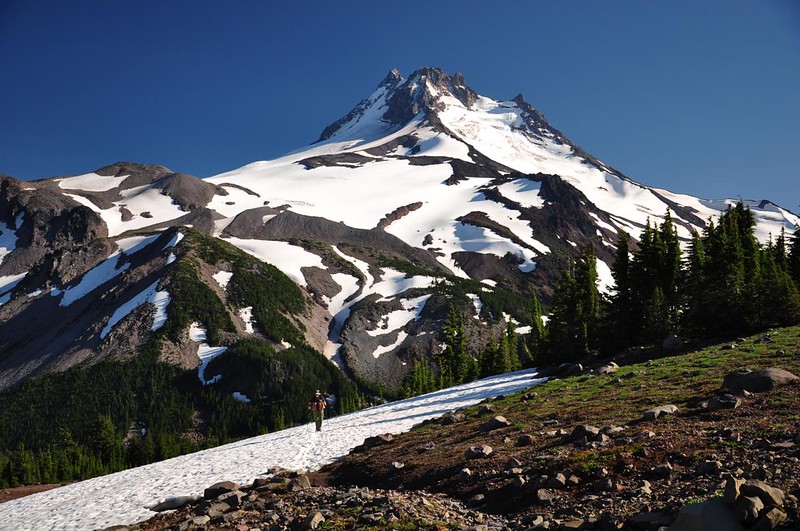 Greg took this shot of me climbing up and over a snowfield: 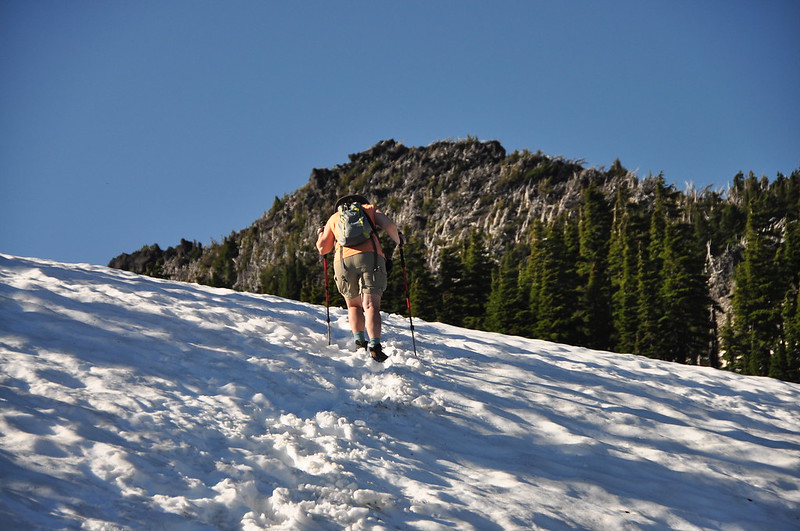 Greg’s foot was really slowing him down. I’m no speedy hiker myself, especially going uphill in the heat. But to my frustration I couldn’t slow my pace enough to match his because the mosquitoes would swarm me if I did. So I kept going to the top. The view north to Olallie Butte and Mt. Hood: 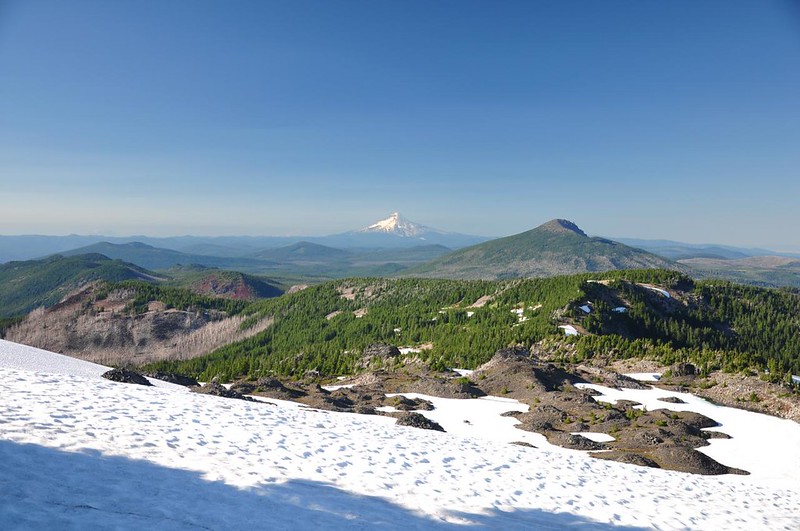 And of course the jaw-dropping view of Mt. Jefferson: 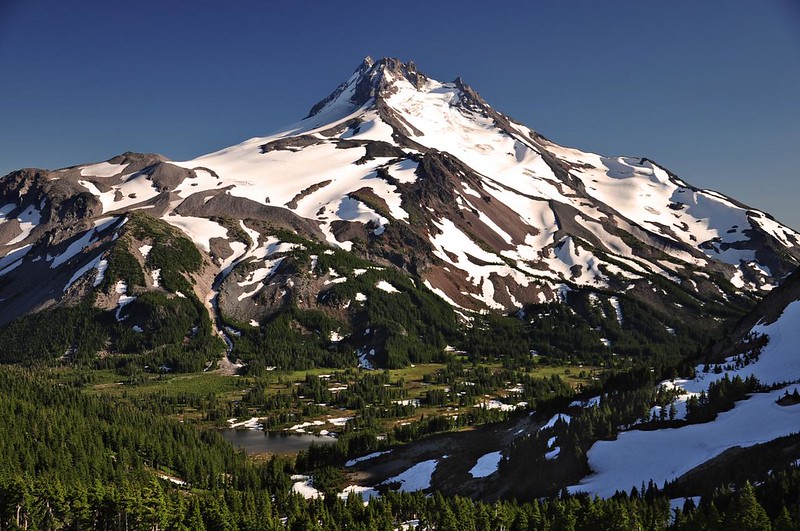 I tried to wait for Greg but the mosquitoes were even worse up on the ridge than down at the lake. After five minutes I had to get moving to get away from the little buggers. On the way down I passed Greg making his slow way up. He was determined to keep going so I kept heading down, going as slowly as possible so he’d eventually catch up. Descending that trail is pretty amazing since Mt. Jefferson is in your face for so much of the way. 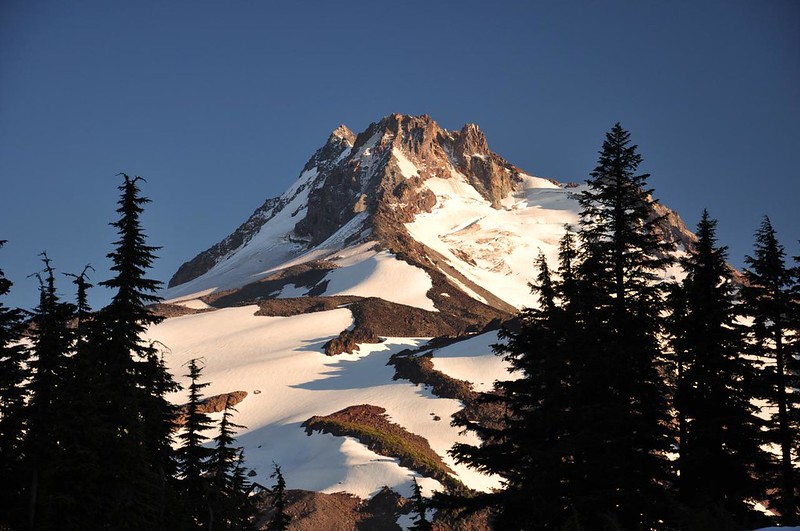 Greg finally caught up to me near Russell Lake. We passed a tarn with a fabulous reflection of Mt. Jefferson so of course we stopped and whipped out the cameras. 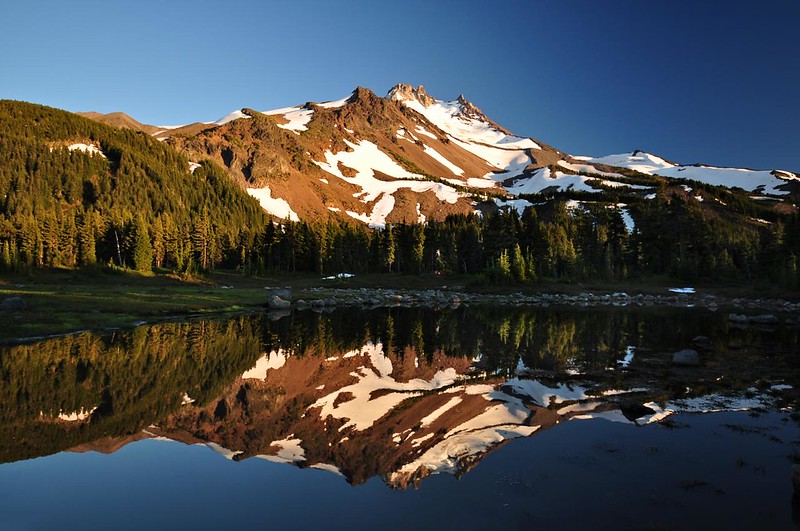 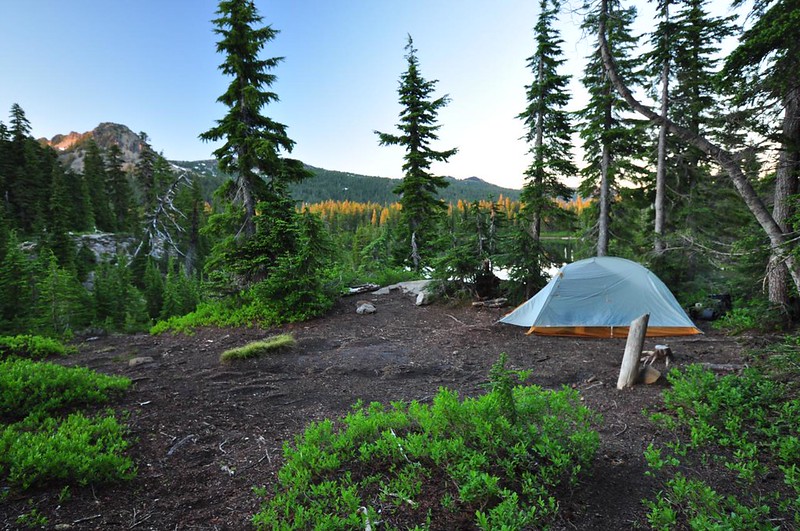 Greg fired up the JetBoil. Love that thing! 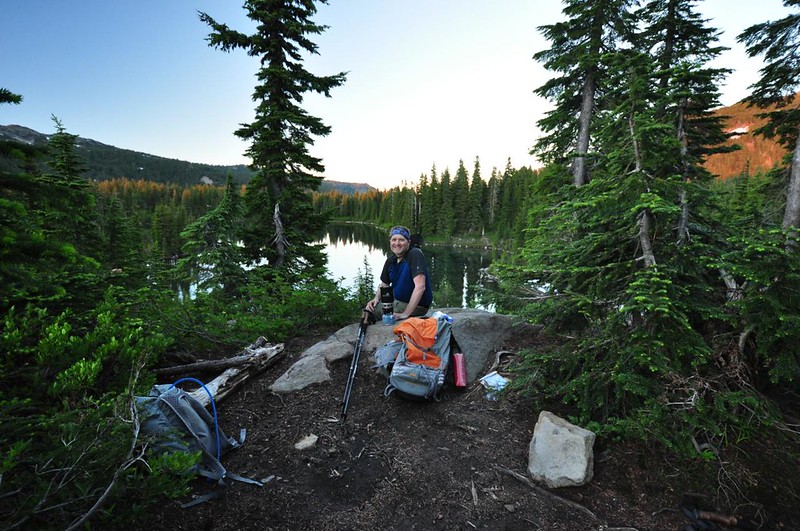 We sat on our rock above the lake and gobbled down dinner, then sat for awhile and enjoyed the view. The mosquitoes finally quit bothering us and the temperature didn’t take a nosedive, so it was REALLY nice sitting there sipping wine and nibbling chocolate and watching the light slowly fade. 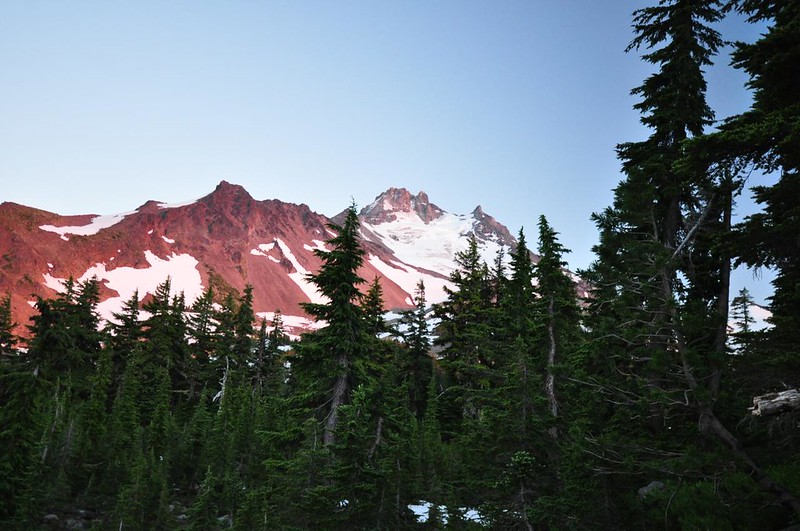 And then the stars came out. WOW. 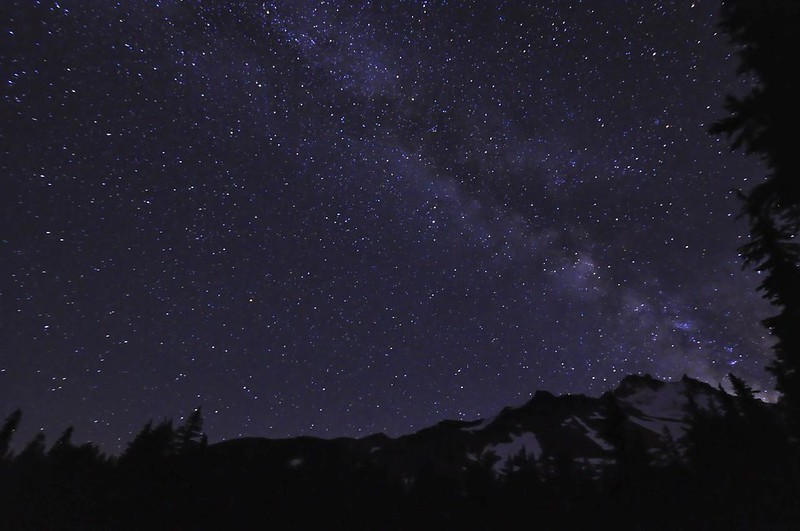 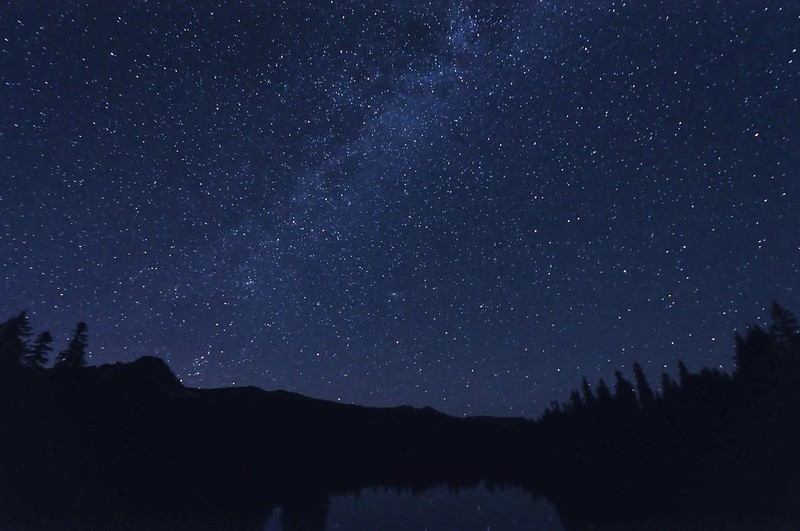 After all the hiking we were exhausted and we both slept soundly. Morning was beautiful, warm, and windy, which mostly kept the bugs away. 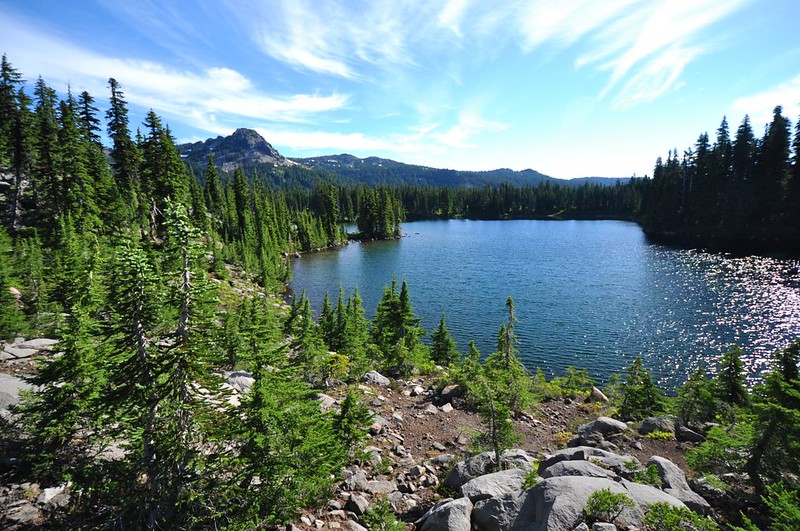 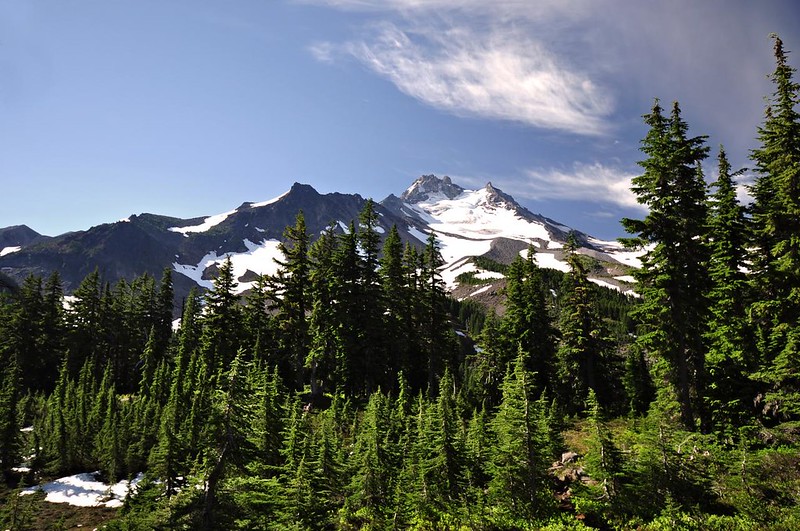 Greg took this shot of me enjoying the beautiful morning from the comfort of my new Alite Monarch Butterfly Chair: 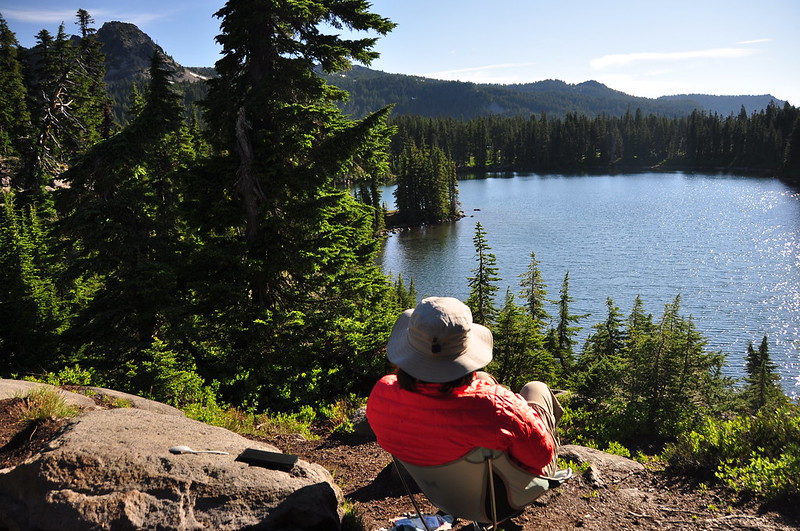 A high layer of clouds started rolling in as we hiked out, so we were glad for our good timing. 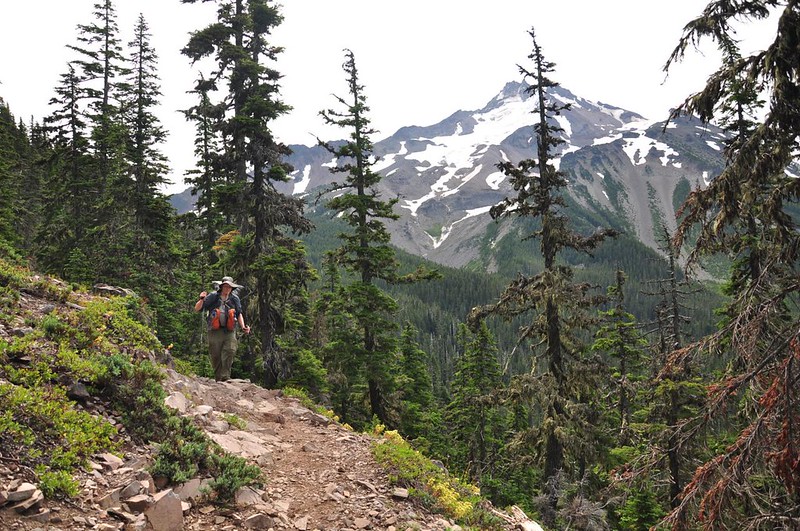 We stopped in Mill City on the way home where we almost (but not quite) devoured an entire large pizza.

So glad to get back up to Jefferson Park after three years away. Despite the mosquitoes (oh, how I itch today!) the scenery was worth the trip!