In the fall larch trees turn a brilliant golden color and it’s quite a sight. Unfortunately larches aren’t common in the Oregon Cascades. There are some, however, on the east side of the Mt. Hood National Forest in and around the Badger Creek Wilderness. So on this gorgeous fall day Greg and I drove over there do a hike along the Fret Creek Trail and Divide Trail with Flag Point as our destination. It was a spectacular drive with beautiful fall color along the road including the larches we had come to see: 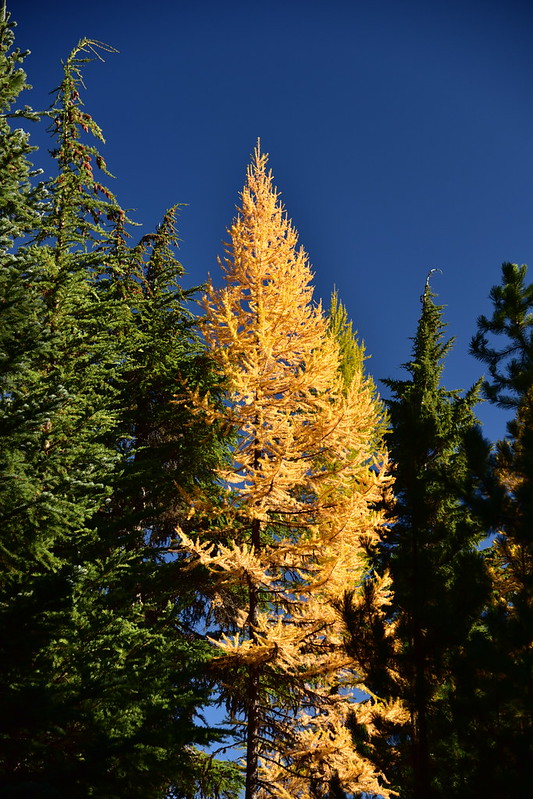 We parked on road 2730 near the Fifteenmile Campground and started up the Fret Creek Trail: 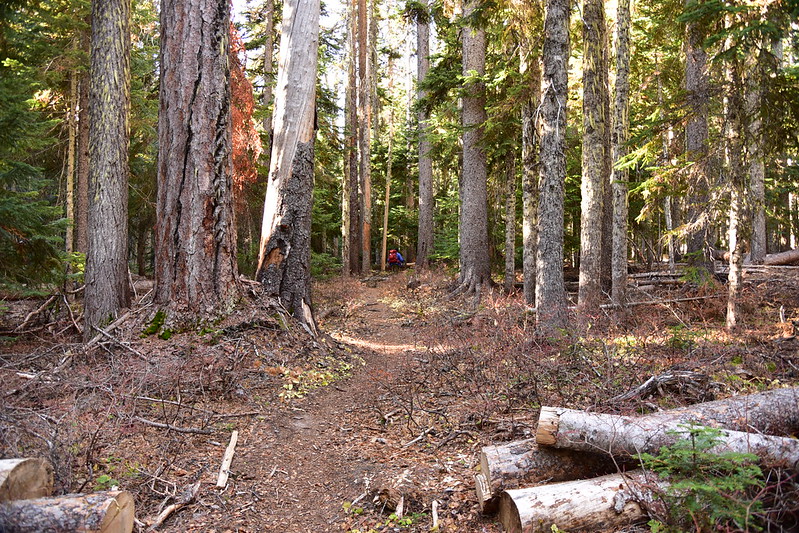 Many of the huckleberries had already dropped their leaves, but not all: 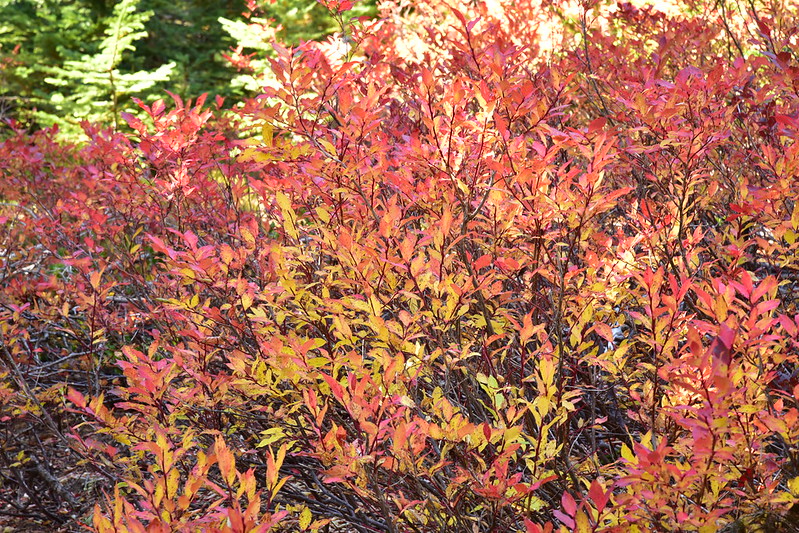 After a steep 2.1 mile climb we hit the Divide Trail and turned left heading east. We got a view of Lookout Mountain to the west (if we had turned right on the Divide Trail we would eventually end up there): 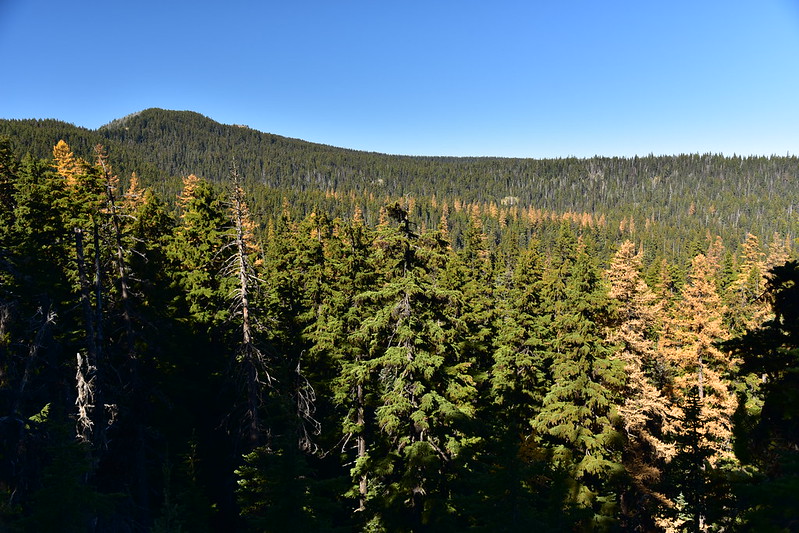 Soon we got our first view of Flag Point and its 41′ lookout tower: 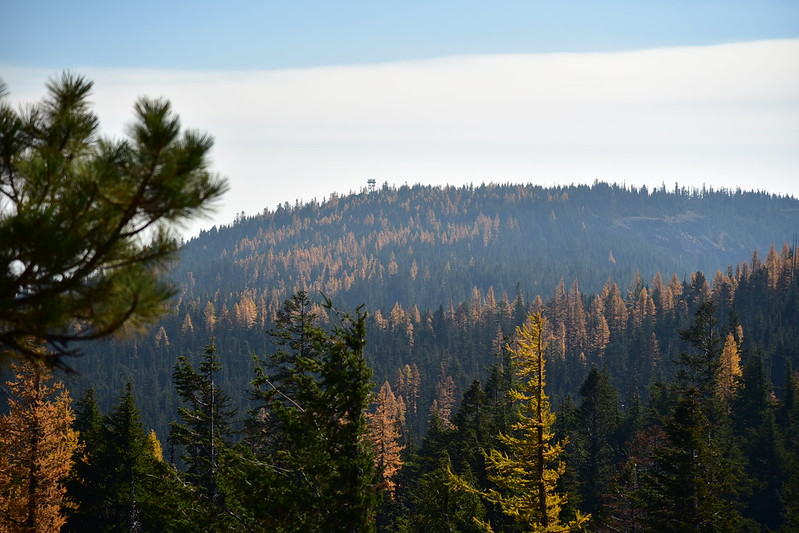 We continued on the Divide Trail: 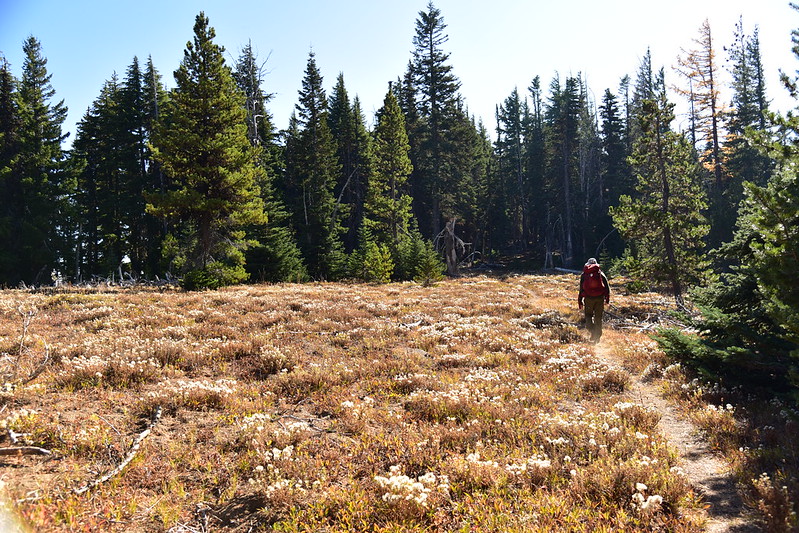 The larches against the blue sky looked beautiful: 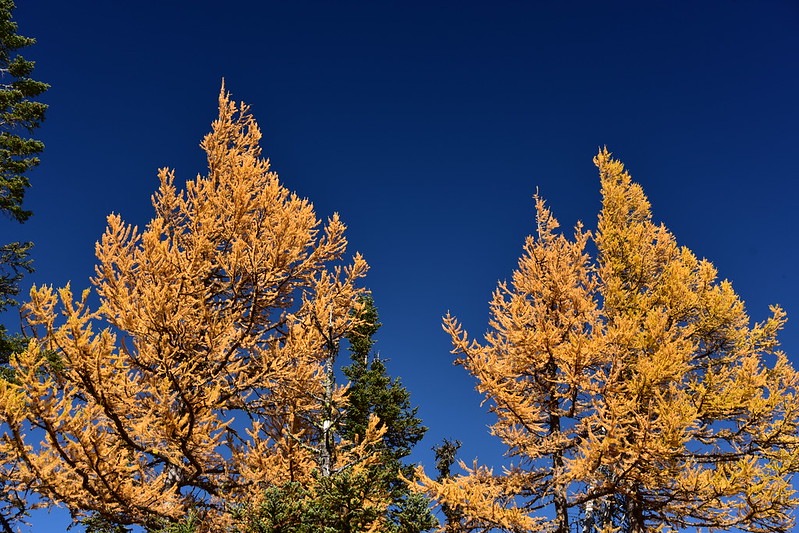 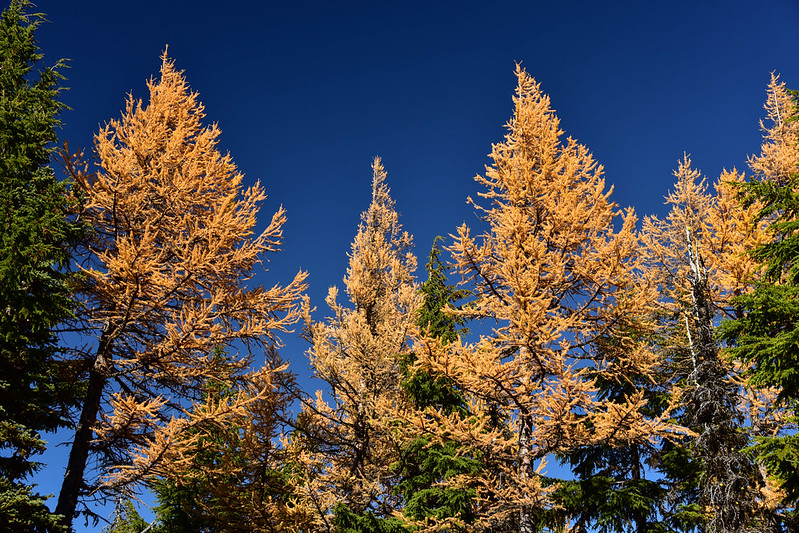 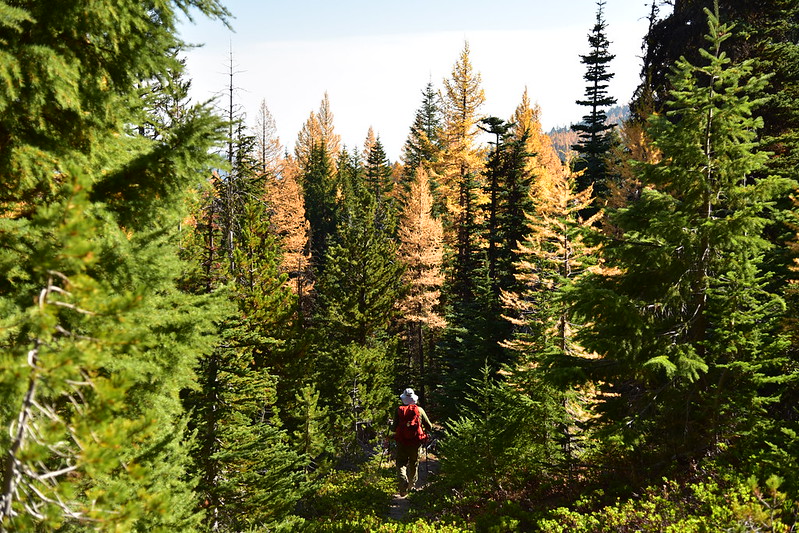 After 3.7 miles the trail reached Road 200, the access road for the lookout, and turned right. Yes, you can drive this road, which we have done before, but it’s very rough. Much nicer to hike. We reached the gate that keeps people from driving all the way to the lookout and hiked past: 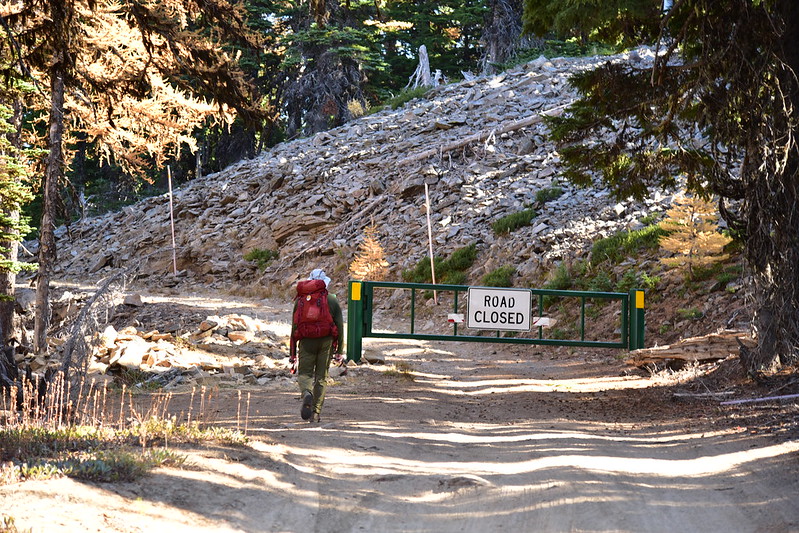 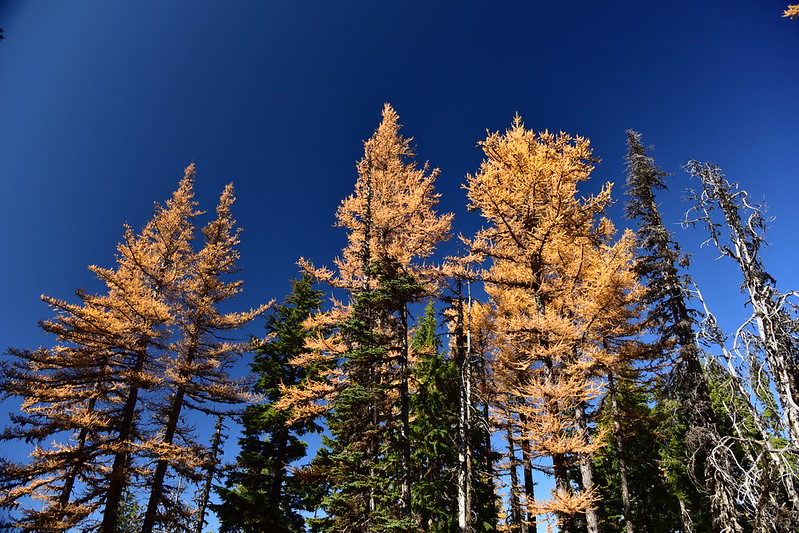 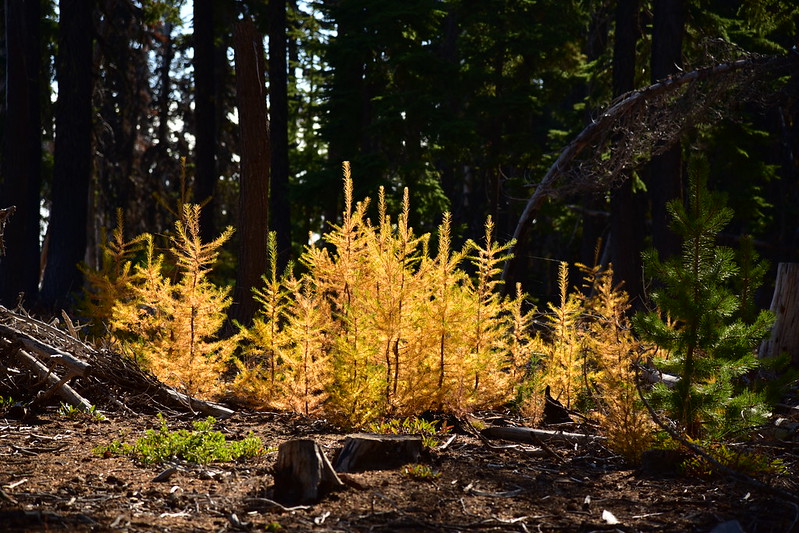 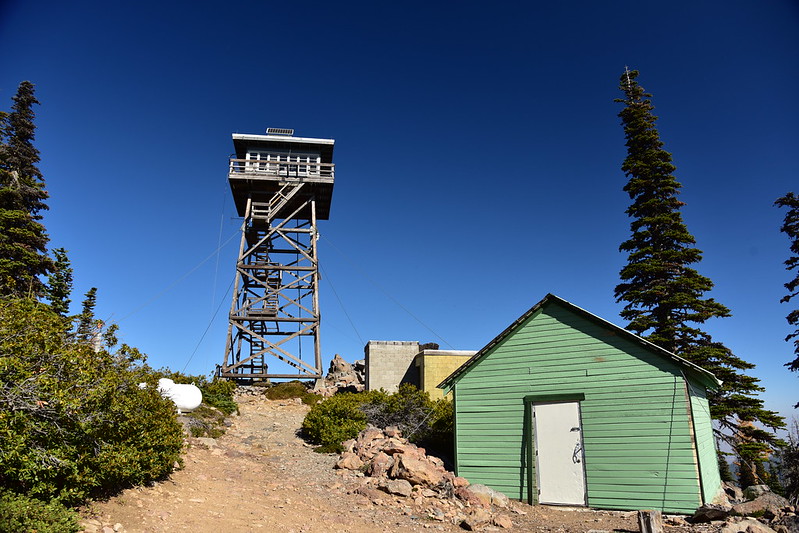 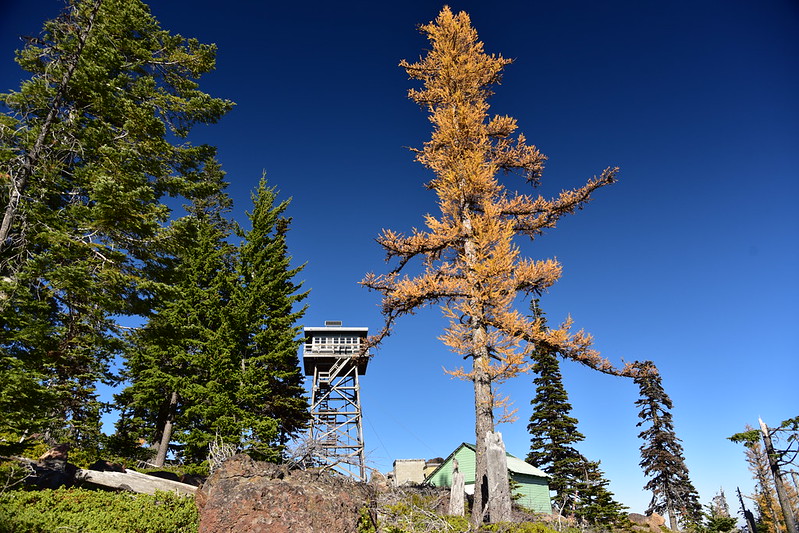 The lookout was unstaffed which meant that the hatch to access the catwalk was locked. But we were able to sit on the stairs below the catwalk and enjoy the spectacular view of Mt. Hood with the golden larches peppered throughout the forest below us: 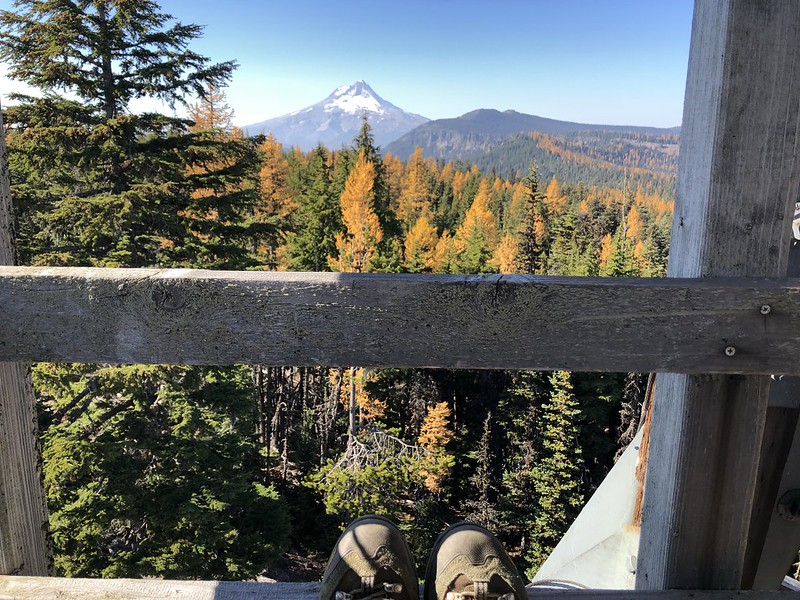 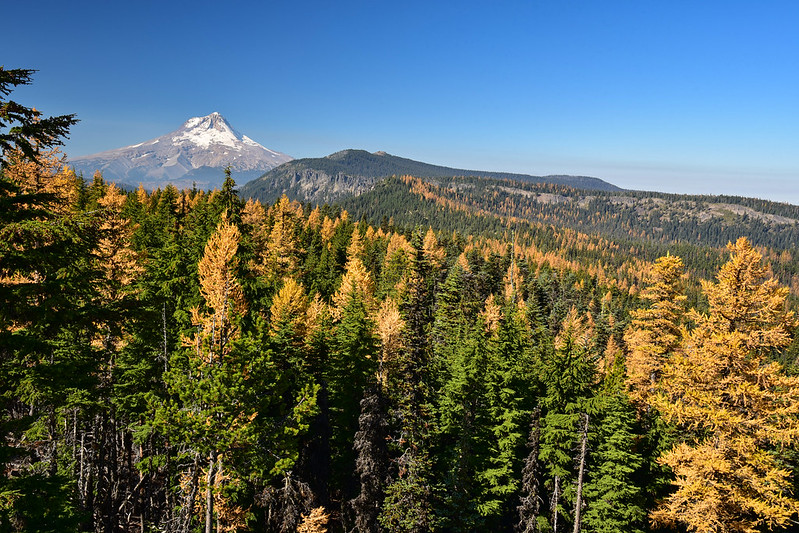 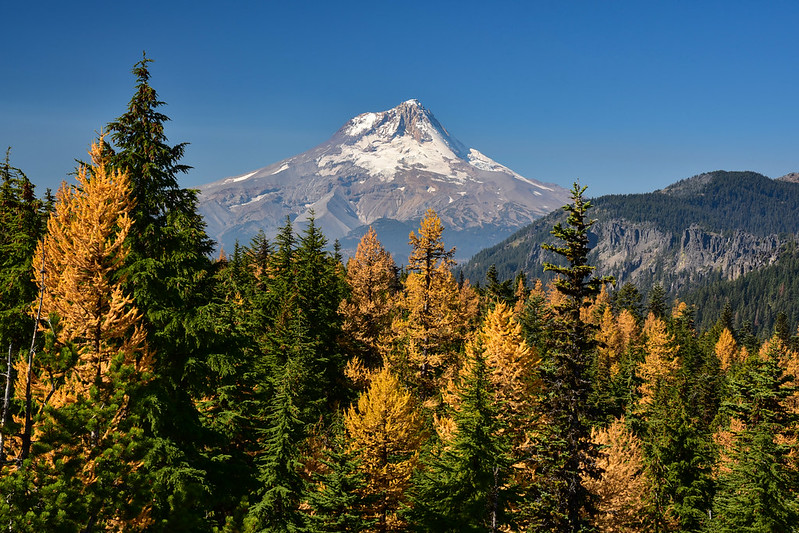 We could also see Mt. Rainier and Mt. Adams, although haze prevented a clear view of them: 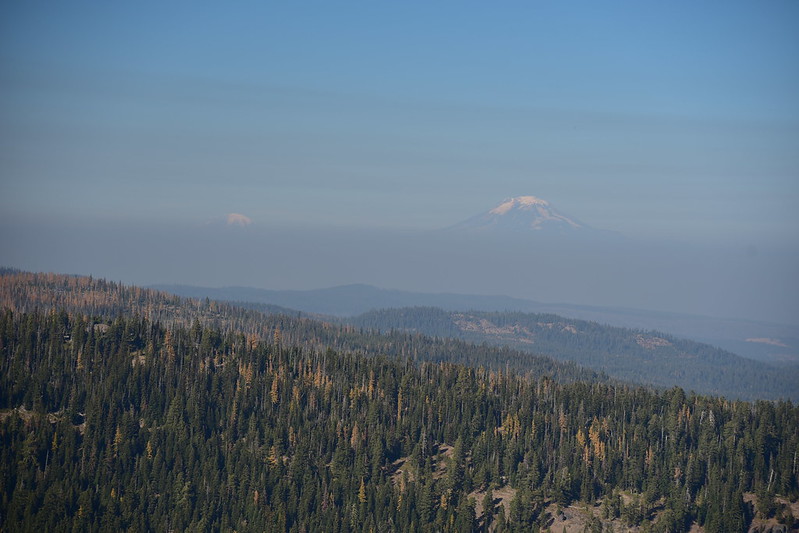 And we could see east to the dry side of the mountains: 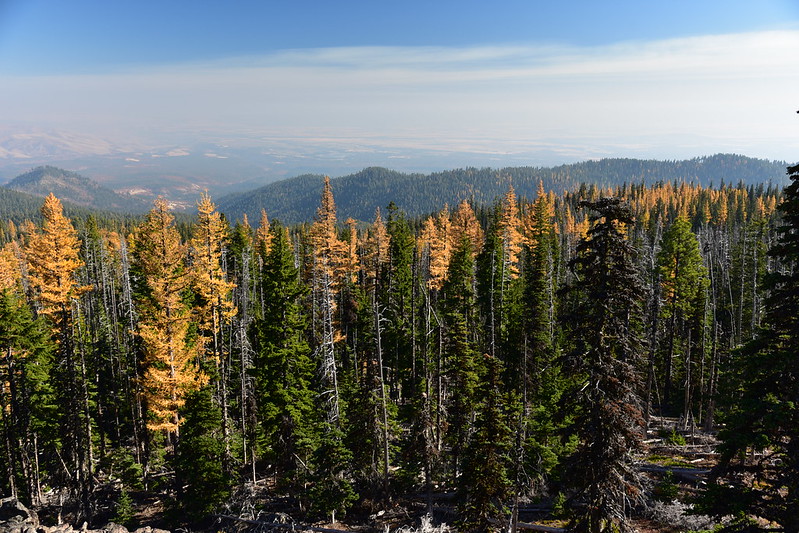 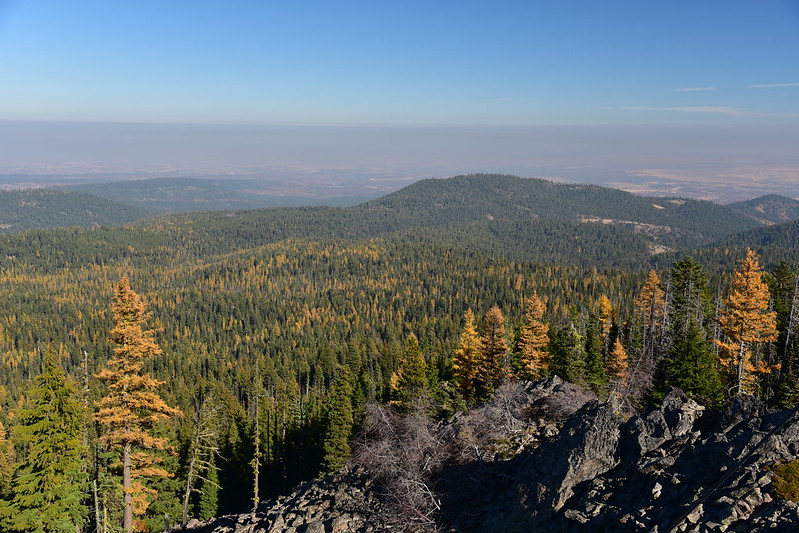 We had the place almost entirely to ourselves. A man and woman hiked up from some point down the road where they had parked. Some cyclists also stopped by and said that friends had come here yesterday and reported that the lookout was staffed and the guy fed them pancakes! It must have been his last day.

The temperature was perfect with just the right amount of warmth. The view was amazing. After spending nearly two hours sitting there soaking it all up we finally tore ourselves away at 2:30 and started heading back. After climbing up the Divide Trail regaining the elevation we had lost, we stopped and turned around for a last view of the lookout: 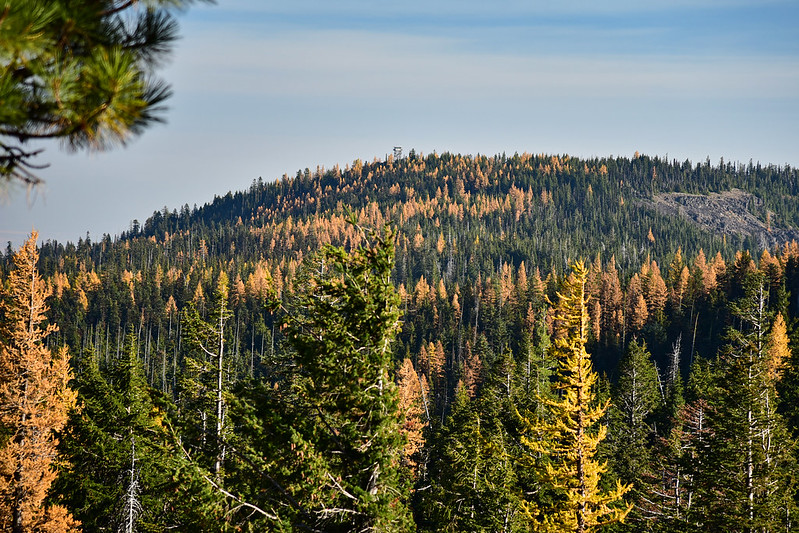 Our total for the day: 8.8 miles, 1700′ elevation gain. This is definitely now one of my all-time favorite autumn hikes. Even though there is some road-hiking involved and even though there is elevation to gain in both directions, the larches in their fall splendor is a sight to behold. Getting views from the lookout on a clear day is icing on the cake. Gorgeous! 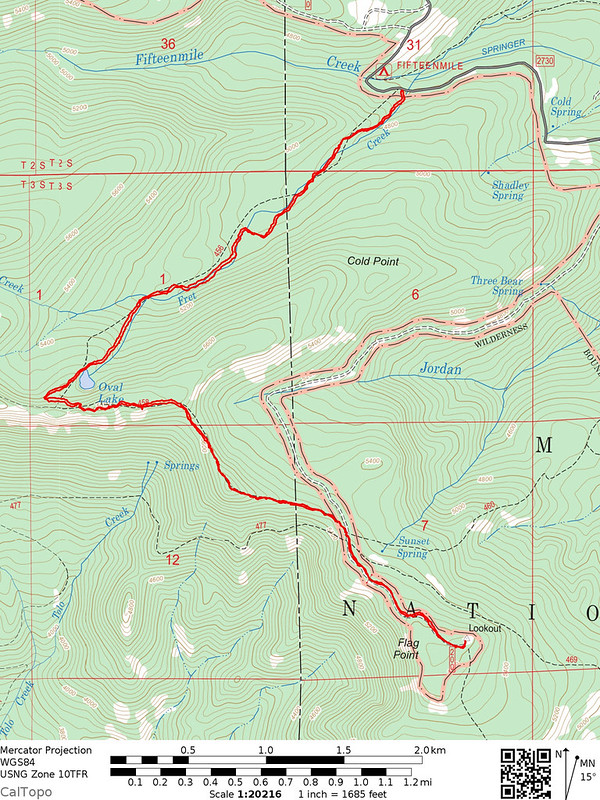