Last night we left our campground and got a hotel room, so instead of waking up to the sound of birds outside our tent we woke up to the sounds of our AC unit. We walked next door and got in line for a delicious waffle breakfast at the Morning Glory Cafe. YUM! 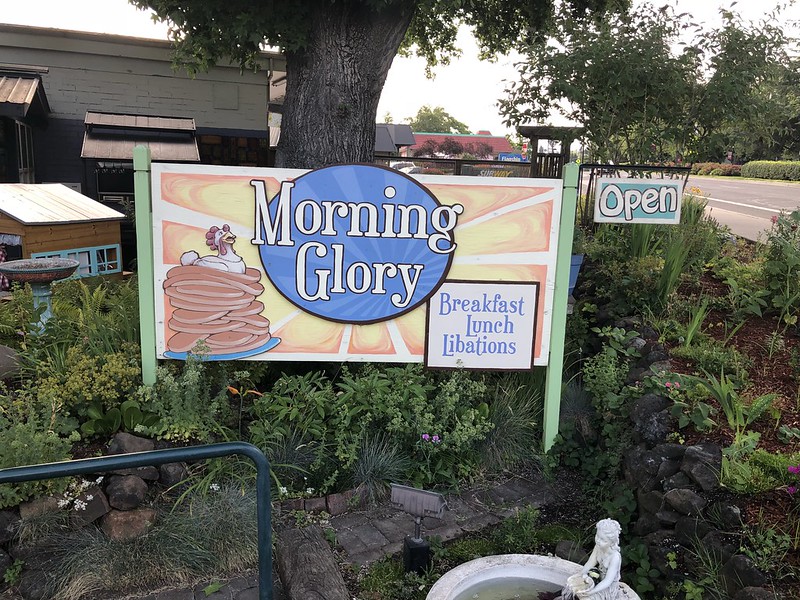 In an effort to escape the wildfire smoke that now blanked the Ashland area, we decided to head to the Umpqua National Forest. After driving for several hours we reached the Tiller Ranger Station and stopped in to get some information and a map. Then we drove Road 28 along the South Umpqua River and pulled in at the Camp Comfort Campground where we grabbed a site. (The Forest Service website says this campground has five sites, but it only has four because one of them has been closed due to safety issues.) We were not happy to discover that we had traded one annoyance (smoke) for another (mosquitoes). 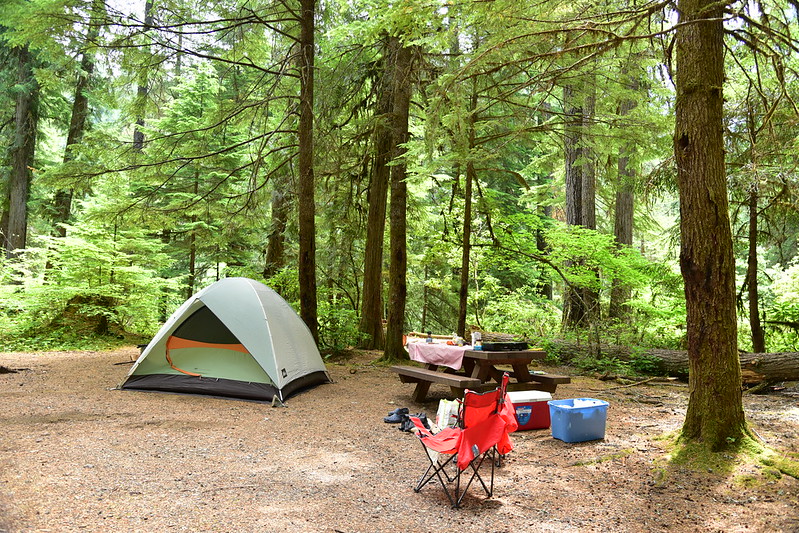 We had some lunch and then set out for a short hike. We drove good gravel roads up to the Beaver Swamp Trailhead and set off for Fish Lake. 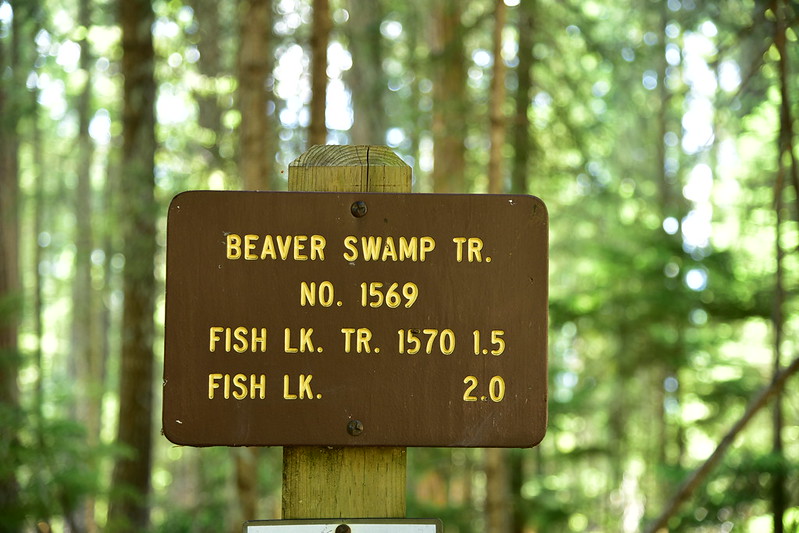 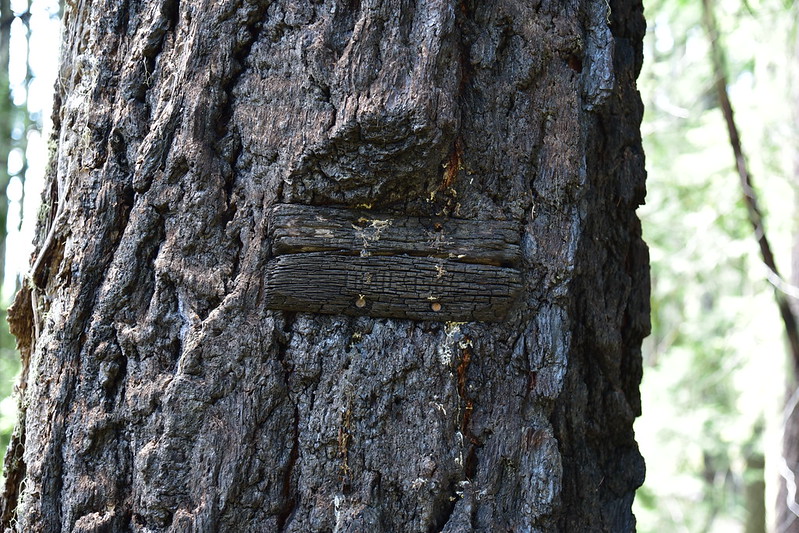 This forest was burned in the 2002 Tiller Complex Fire, which consisted of eight large and many small fires. These big trees survived the fire but are still blackened on the outside. 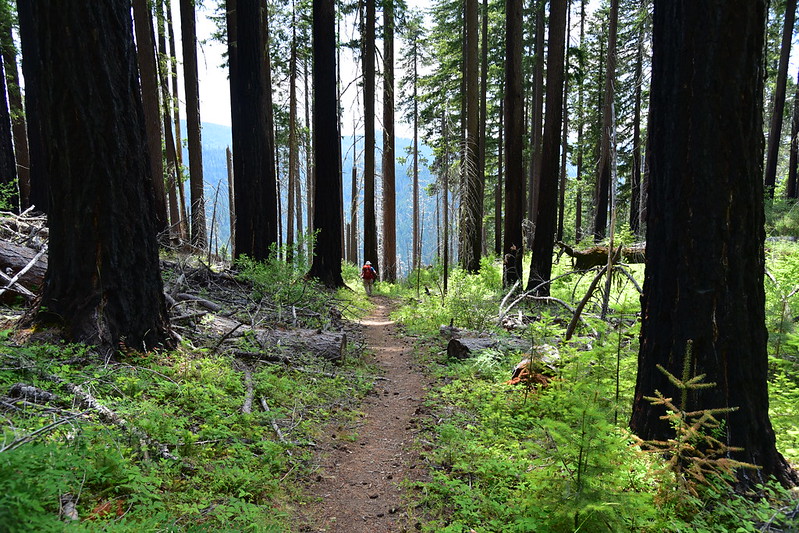 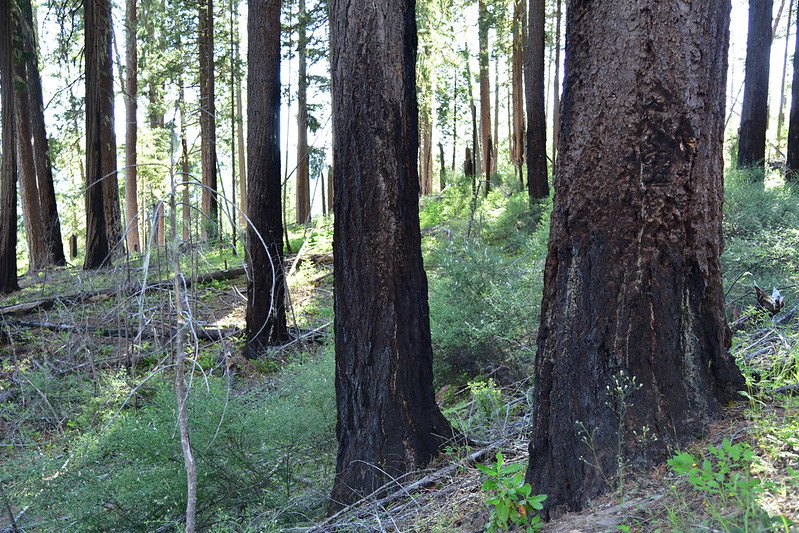 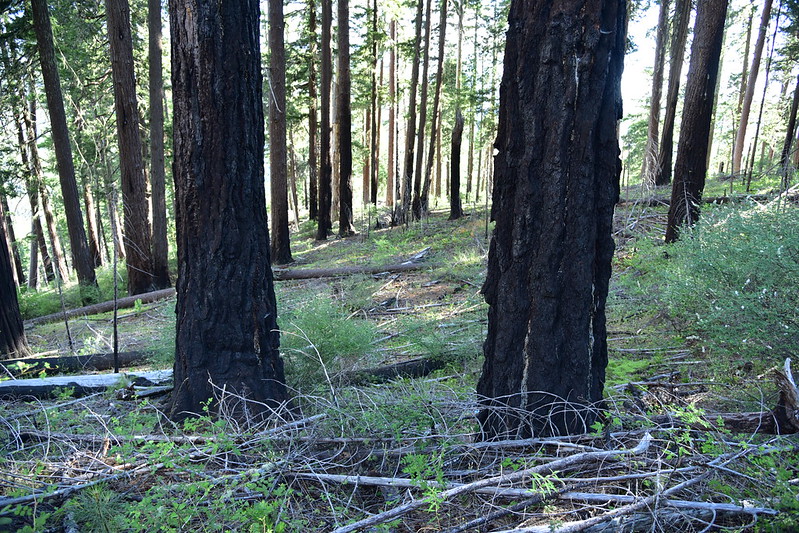 This tree’s center burned out: 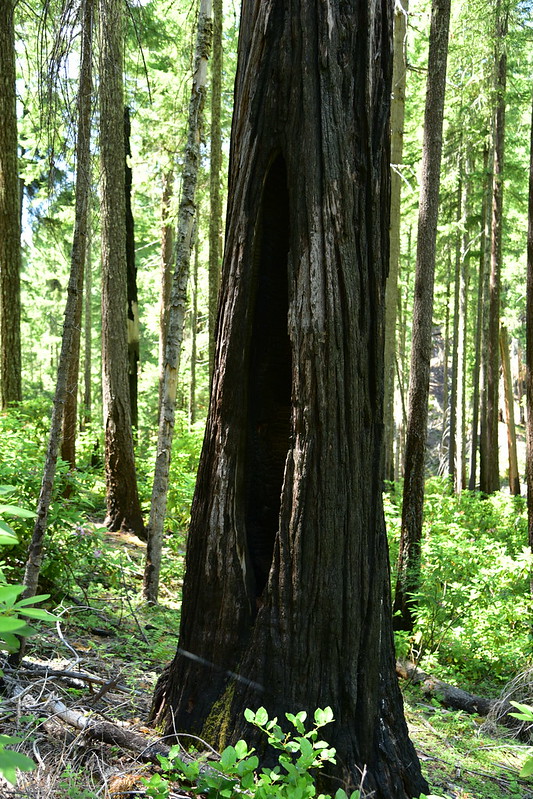 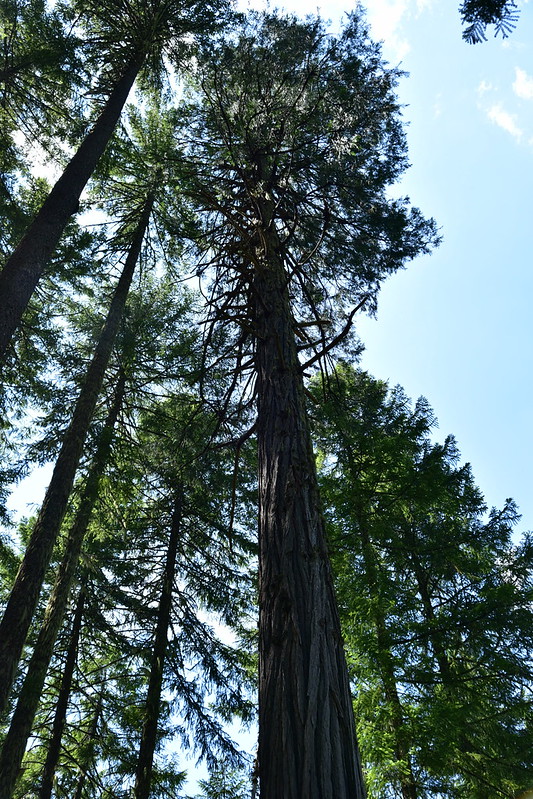 The forest is actually pretty lush in many places: 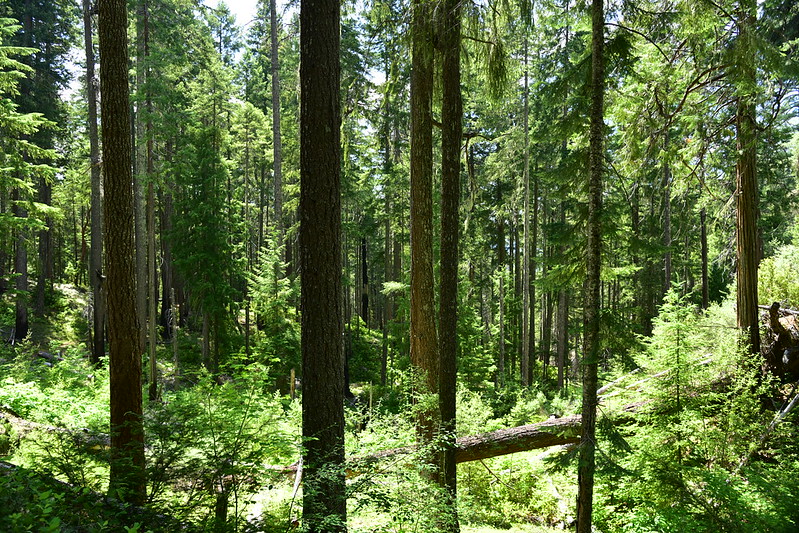 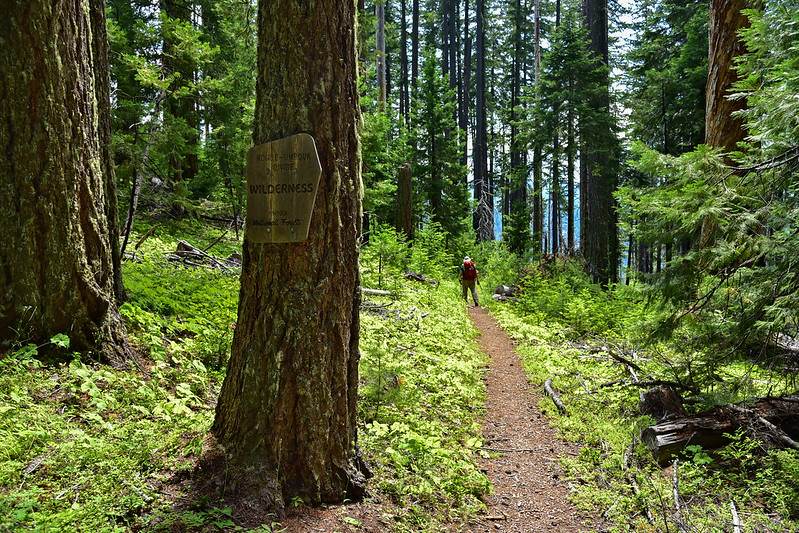 We saw hundreds of butterflies on this hike: 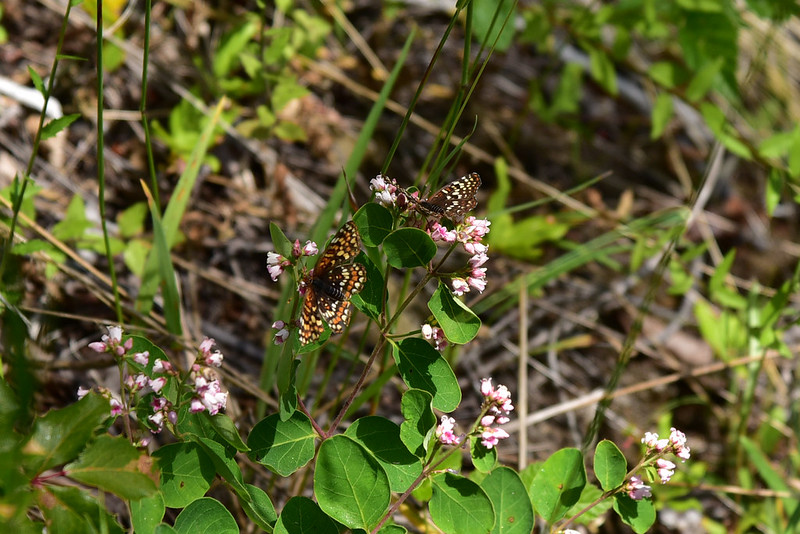 There are a lot of incense cedar in this forest: 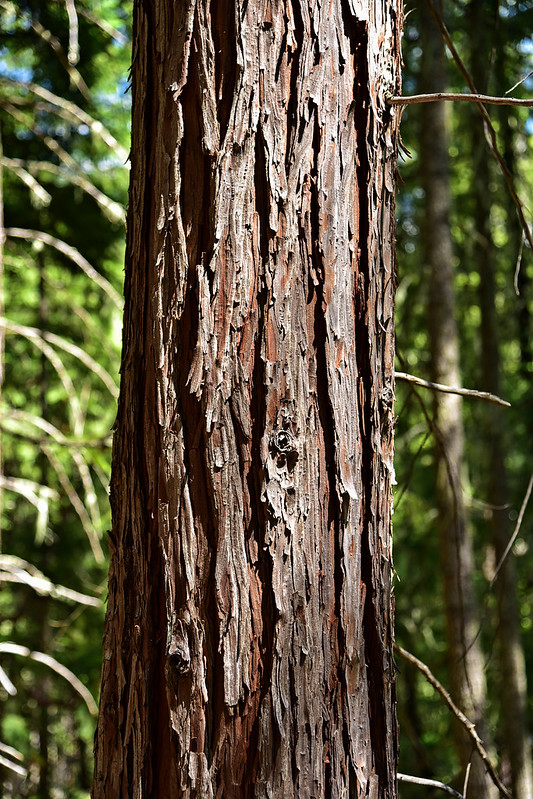 After descending the Beaver Swamp Trail, at 1.3 miles we turned left onto the Fish Lake Trail. Another 0.3 miles later we reached the lake outlet and this old broken sign. (Of course, even if the sign was new and in-your-face people would still not follow the 200-foot rule) 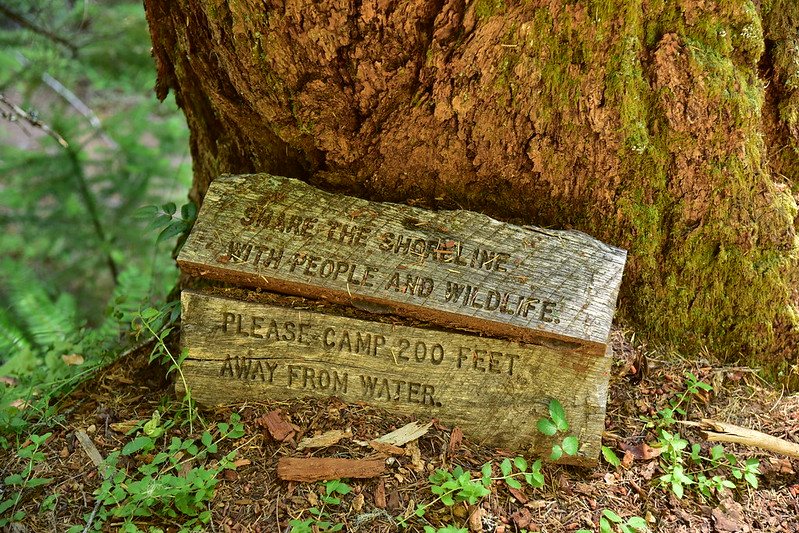 Highrock Mountain towered above the lake: 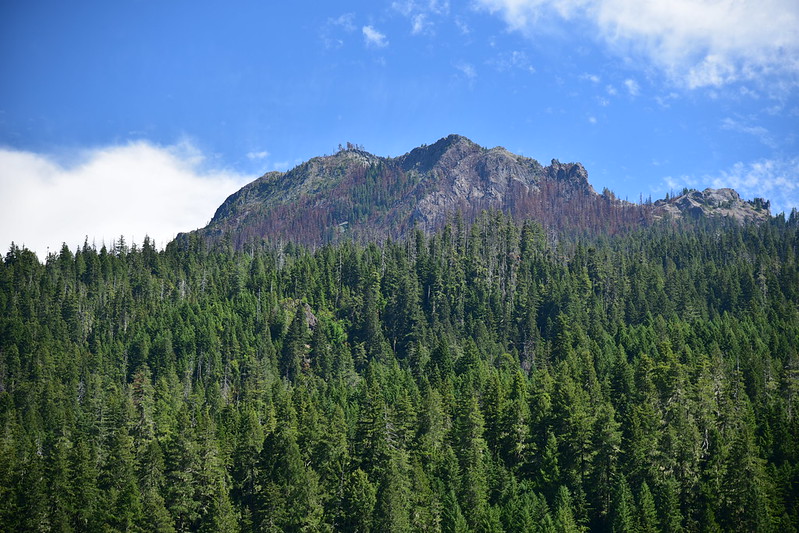 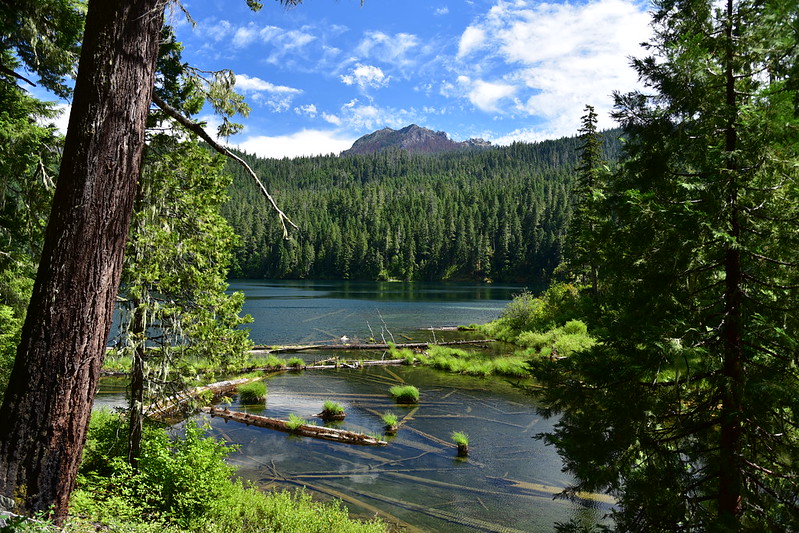 Another 0.3 miles down the trail we reached a nice peninsula where we dropped our packs and enjoyed a nice long rest. Bonus: no mosquitoes! 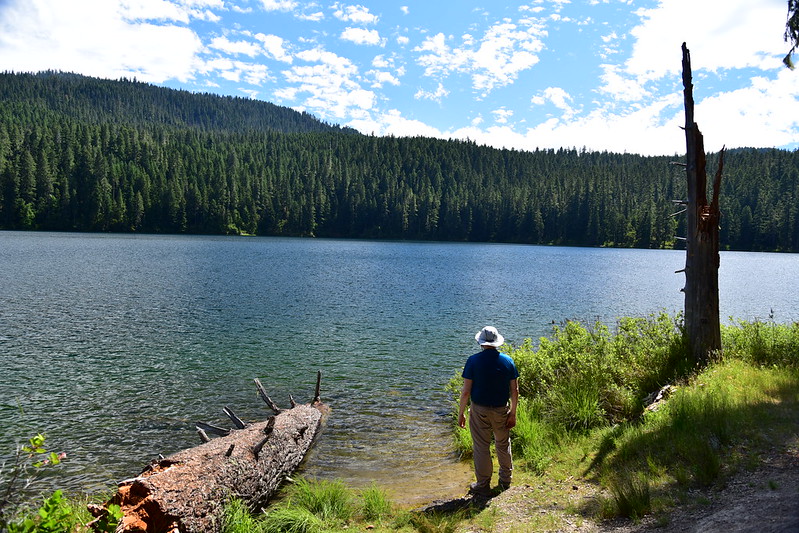 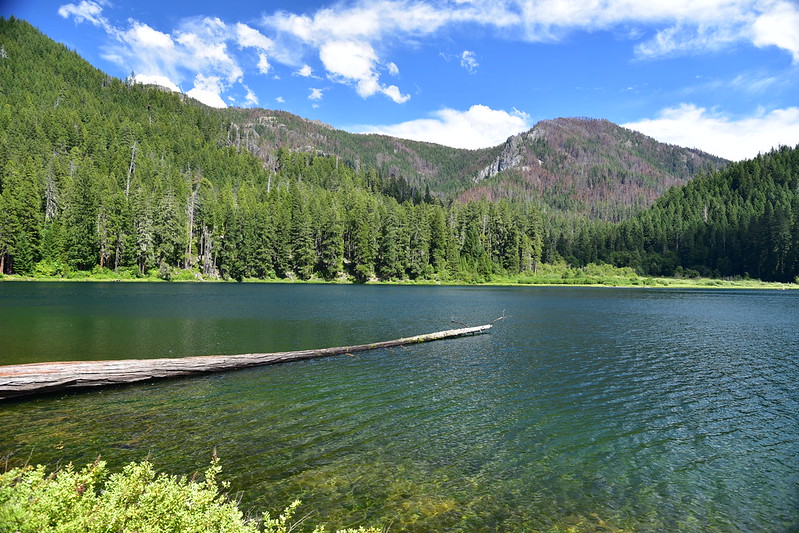 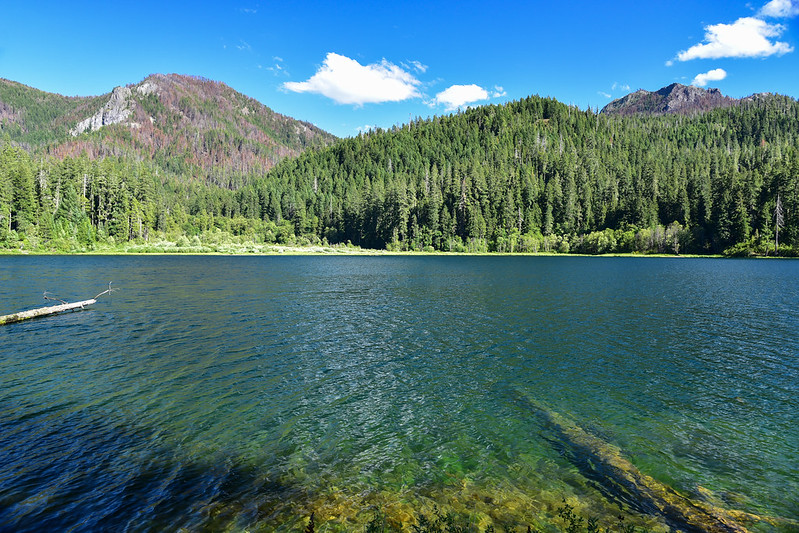 Greg noticed this tenacious fireweed growing on a log: 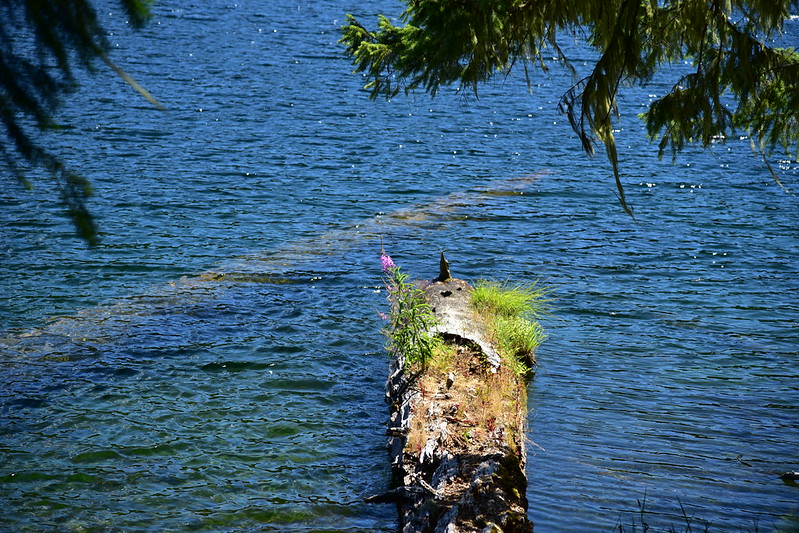 Greg stayed by the lake while I went exploring further along the trail. There’s a nice campsite just beyond the peninsula: 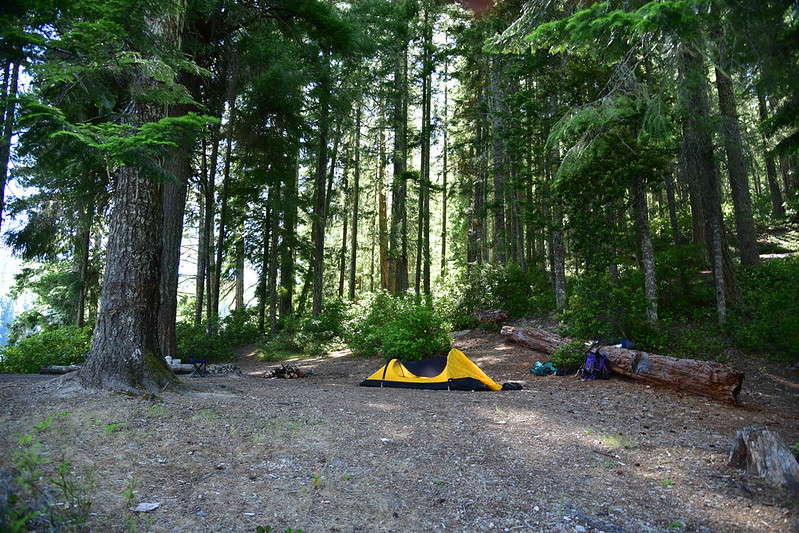 I went another quarter mile down the trail, which was very muddy in spots. I came to an illegal lakeside campsite and was dismayed to see quite a lot of trash that had been left behind: 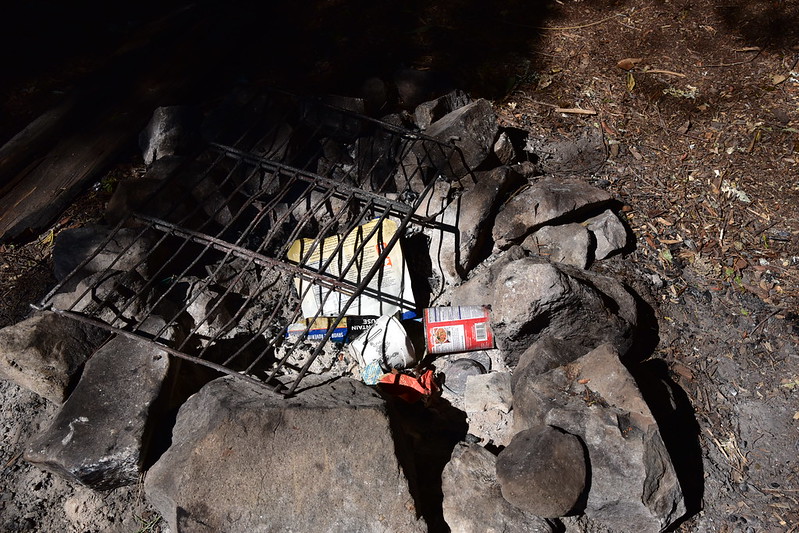 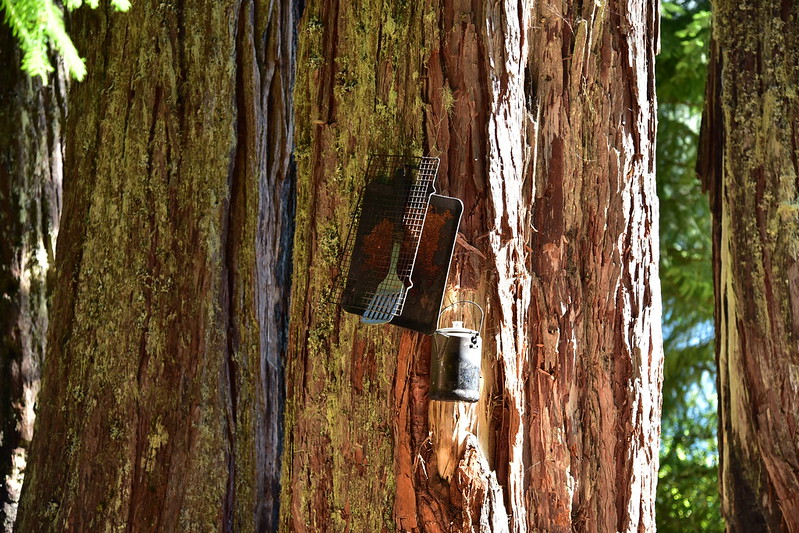 Someone had hauled in a very heavy cast iron griddle and then just left it here. It was too heavy to haul out, so I grabbed what I could of the other trash and carried it back to where Greg and I were hanging out. I had left my trash bag with Greg or else I would have been able to pack out everything. As it was we had trouble getting everything to fit in the bag, especially since we had also found trash at the peninsula: 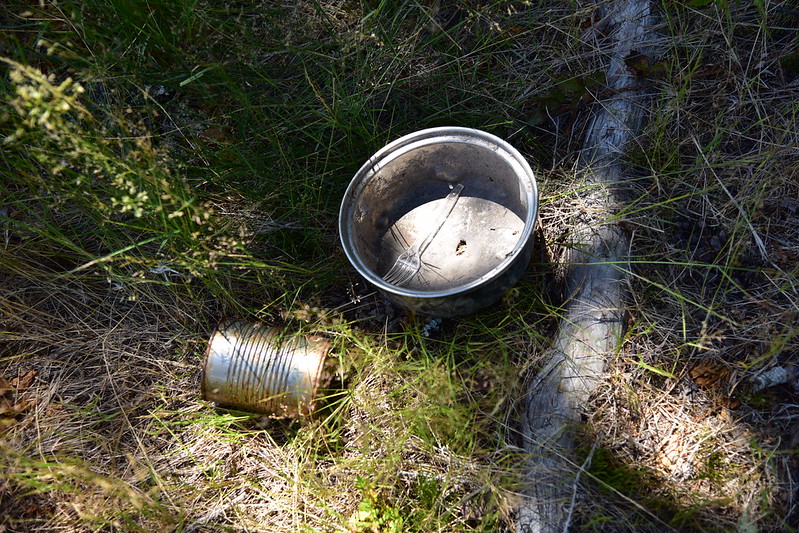 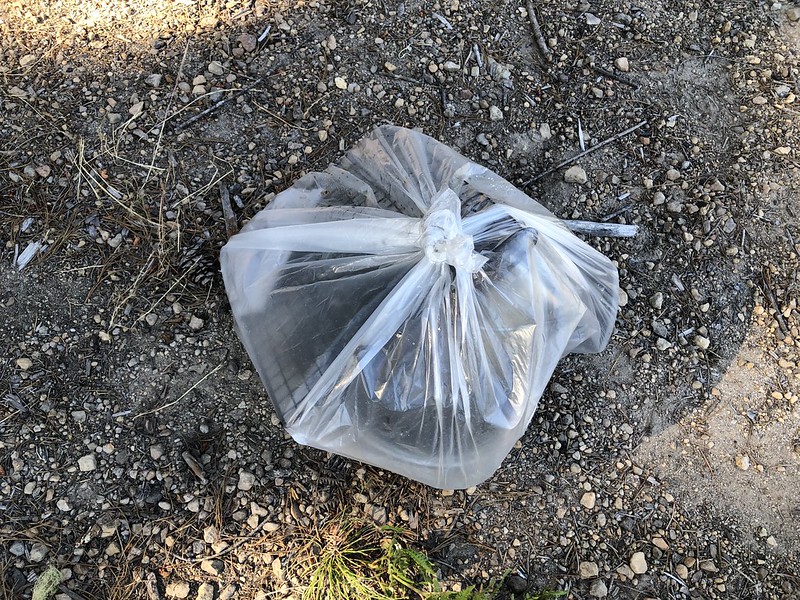 We started hiking out at 5:30. I noticed this log munching on a branch! 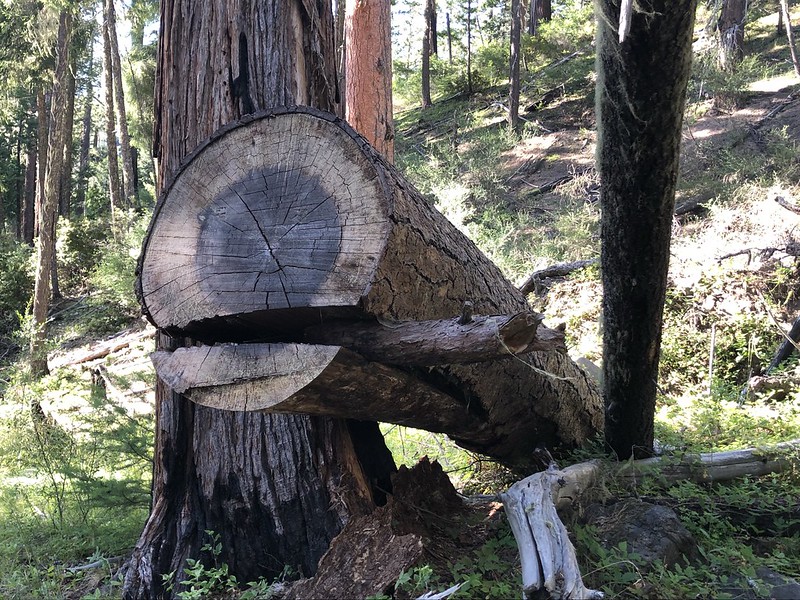 A note: later I would learn that Fish Lake was once the site of a guard station. I can’t tell for sure from the old maps, but I believe it may have been at the east end of the lake where Highrock Creek flows in. I didn’t go that far to explore, although I would have if I had known. Here’s a photo from 1944: 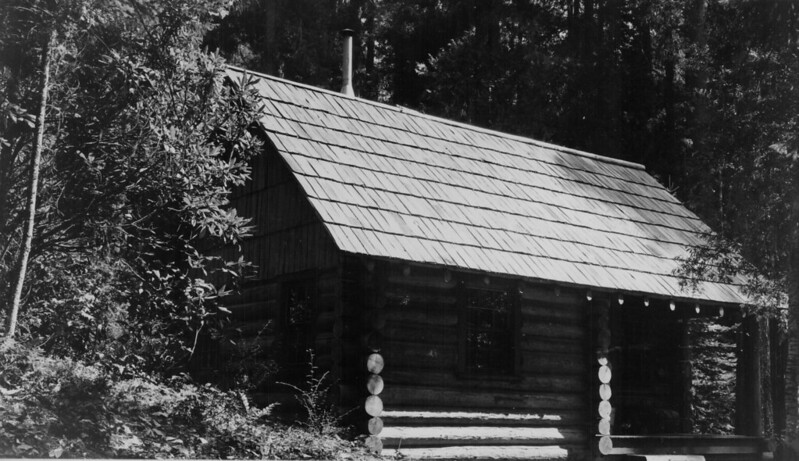 Back at our campground I made dinner with my headnet on. We couldn’t get our new Thermacell to work (after some testing at home it turns out you need a COMPLETELY full fuel canister for it to work. Half-full is not good enough.) Throughout the evening the whine of mosquitoes was drowned out by the very obnoxious sounds of dirt bikes racing up and down the road on the other side of the river. It went on for hours.