After a long 12+ mile hike to McNeil Point on Saturday, Greg and I were ready for something short and sweet on Sunday. So after sleeping in and chilling out in the morning we headed out to the McIntyre Ridge hike in the afternoon. 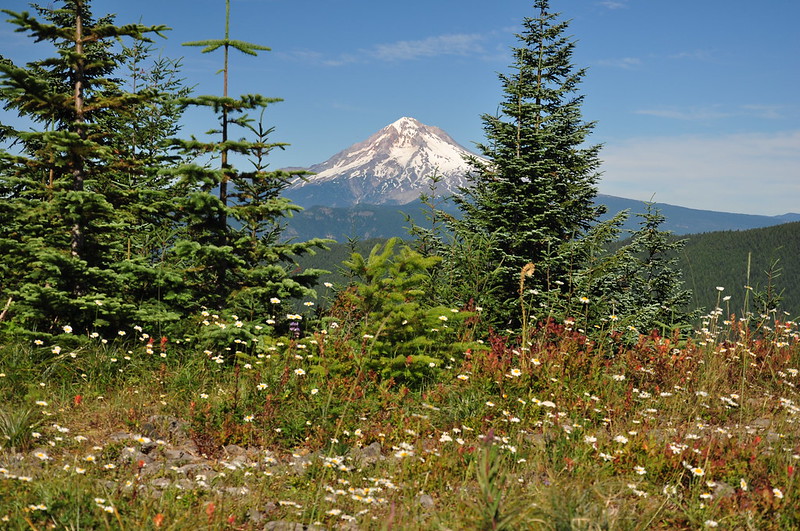 If you’re unfamiliar with the history of this hike, the old trailhead used to be at the end of Wildcat Creek Road at the north end of the ridge, until the Forest Service gated the road in 2005 due to its deteriorating condition. At that point the easiest access was to park at the old gravel pit/quarry at the end of Road 150, then hike the Douglas Trail up to McIntyre Ridge. That quarry was a scary place, though. It was totally trashed and there were shotgun shells all over the place. An ad hoc “trailhead” was established around 2009 at the end of spur Road 108, which dead-ended just a short ways downhill from the McIntyre Ridge Trail. Following an old skid road up the hill brought you to the trail, and it was a nice 4.5 mile round-trail hike to the viewpoint bench and back. Unfortunately, the OHV crowd liked this access as well and they were actually driving on the trail. 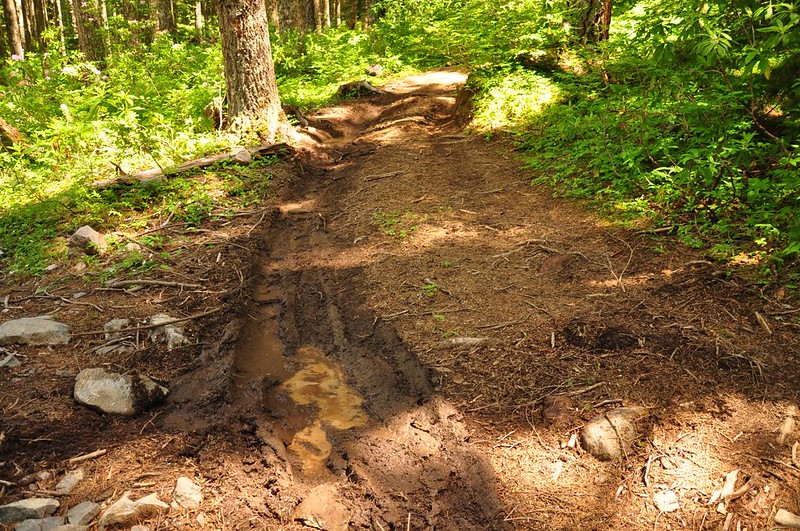 So the Forest Service gated that access too. But they also closed the old gravel pit and decommissioned Road 150, establishing a new trailhead further back. TKO helped build a connector trail from the new trailhead to the Douglas Trail so you don’t have to walk the decommissioned road, which now looks like this: 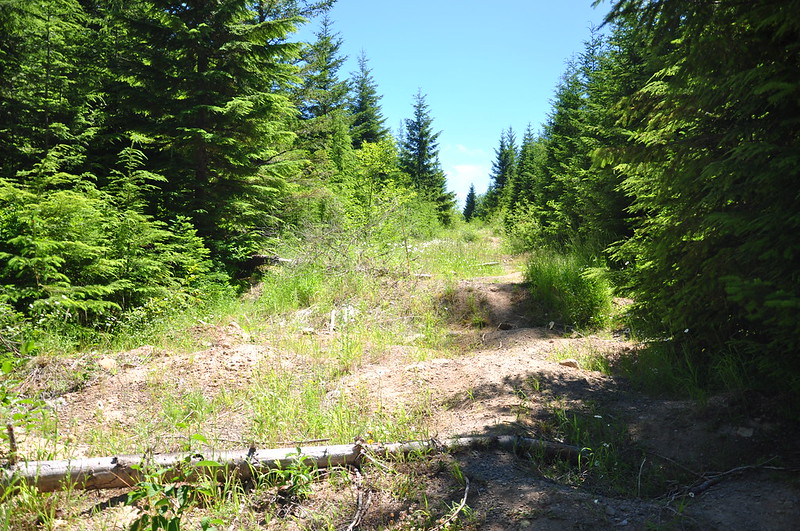 There is not a lick of signage at the trailhead (probably because it wouldn’t last long thanks to the numerous target shooters in the area), but the trail is easy to spot: 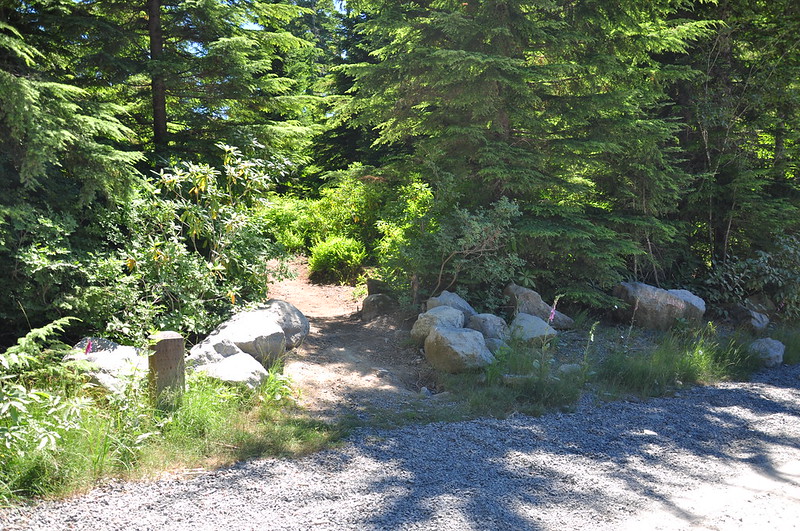 The trail skirts around the edge of the old gravel pit then connects up with the Douglas Trail where there is an old shot-up trail sign. 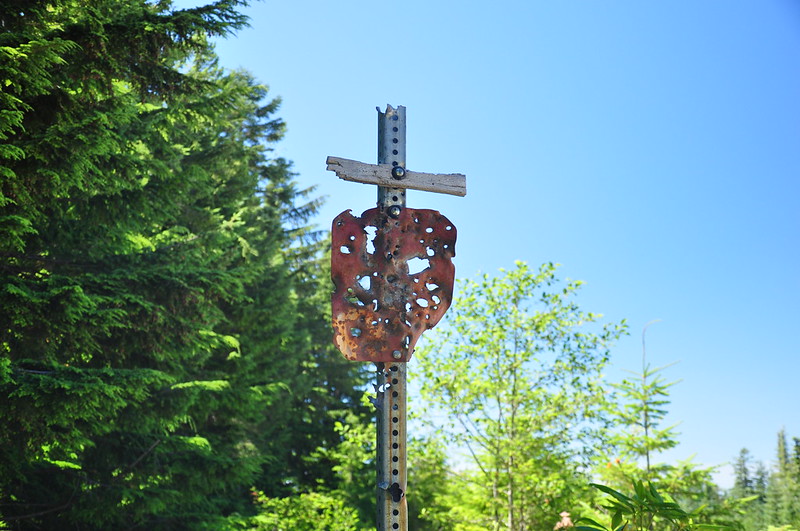 On the Douglas Trail (accompanied by the sounds of target shooting): 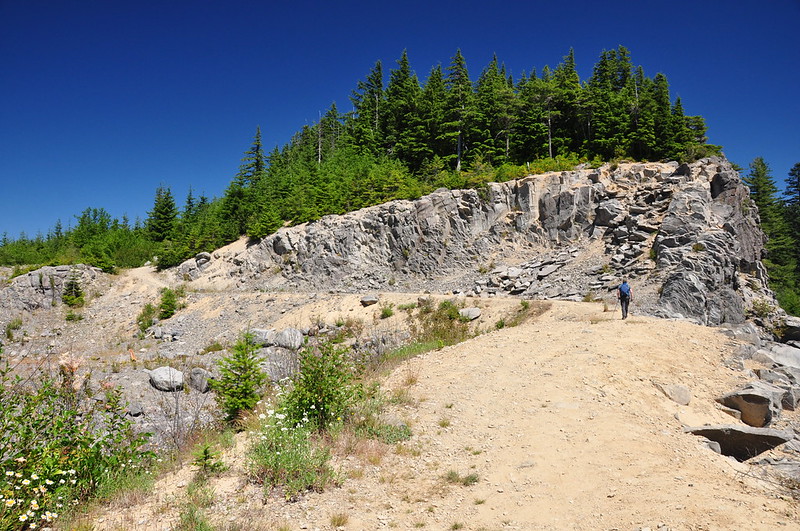 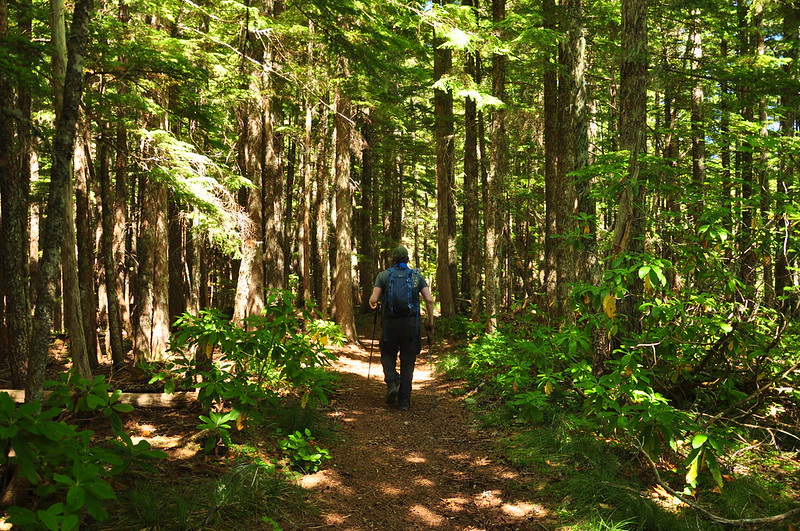 This is a lonely forgotten corner of the Mt. Hood National Forest and I bet this trail receives little to no maintenance. So we were surprised to find it in excellent condition. This was the only blowdown: 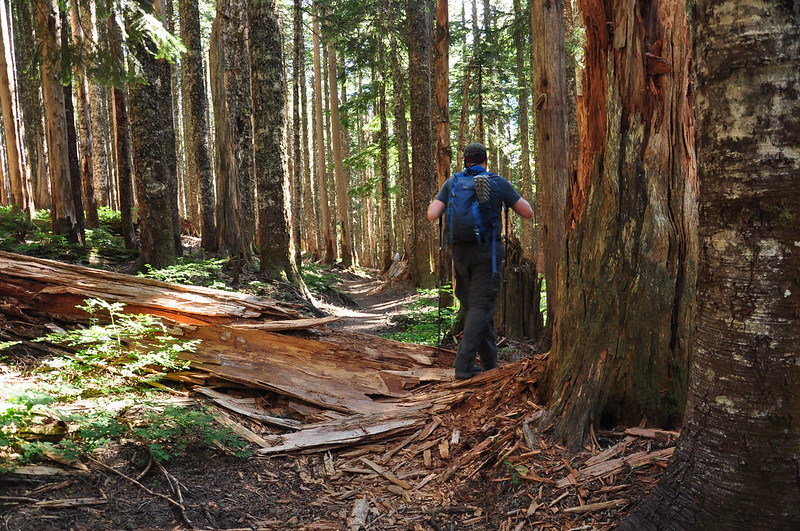 We hiked 2.5 miles up to Wildcat Mountain. No sign of course, but the trail is fairly obvious and there was also some flagging: 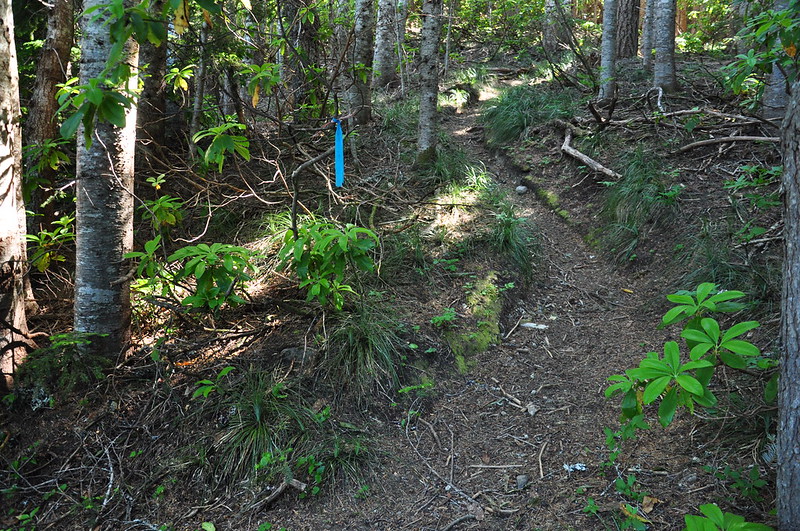 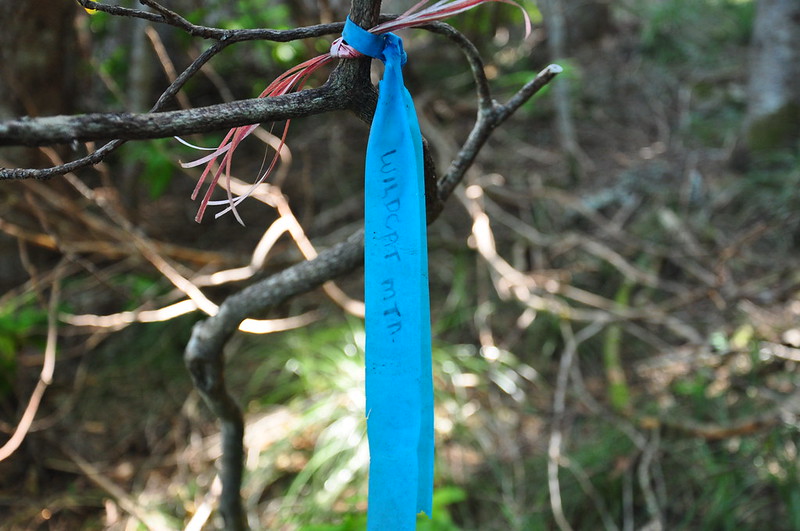 The rhododendrons are THICK up here: 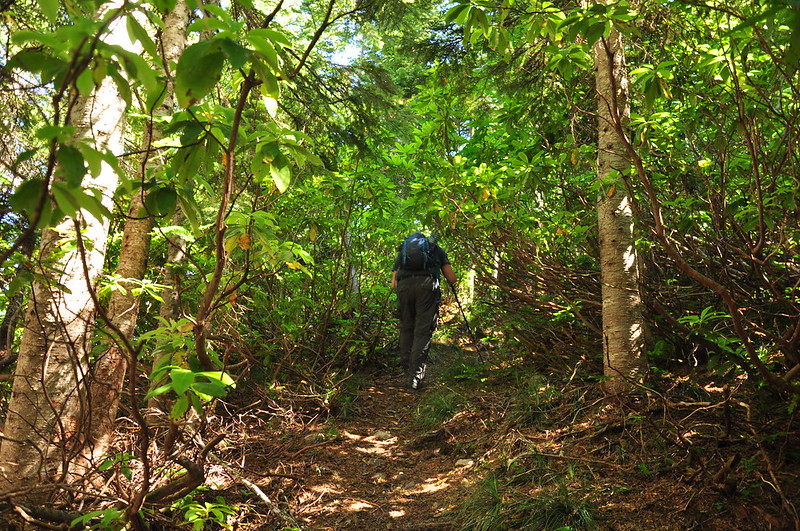 The summit is just a jumble of rocks surrounded by rhododendrons and trees: 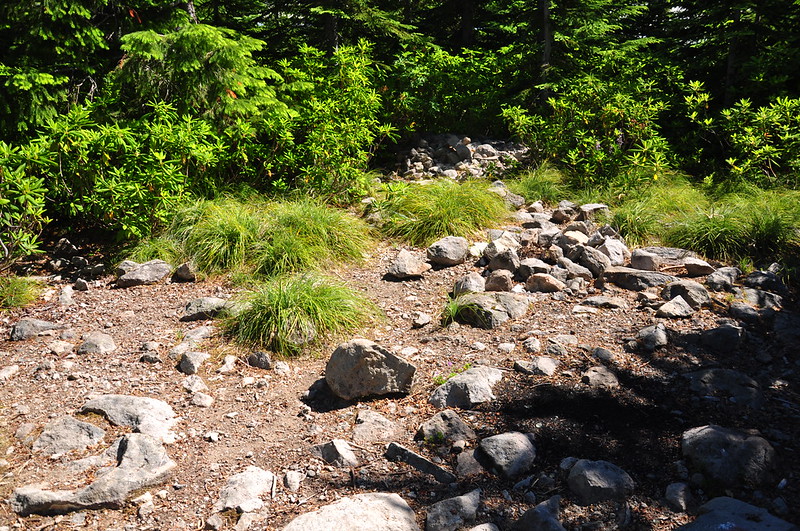 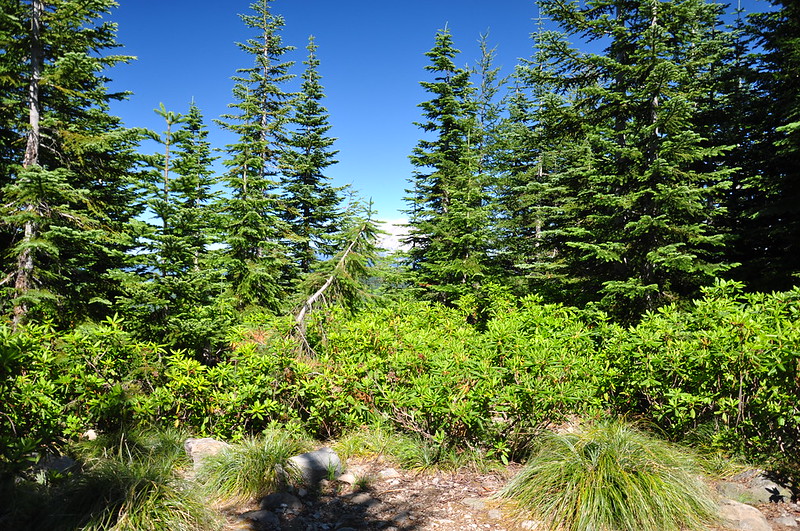 There is almost no evidence of the lookout that once stood here, not even the usual concrete footings. But there are lots of bits of melted glass: 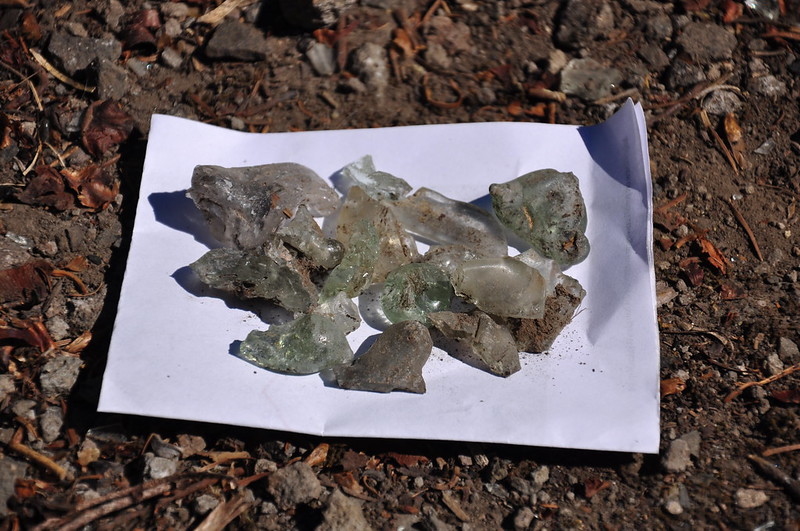 I’ve never come across a photo of this lookout, which was burned down in 1953. Panorama photos were taken here in 1933 and boy, have things changed!

And today the summit views just look like this: 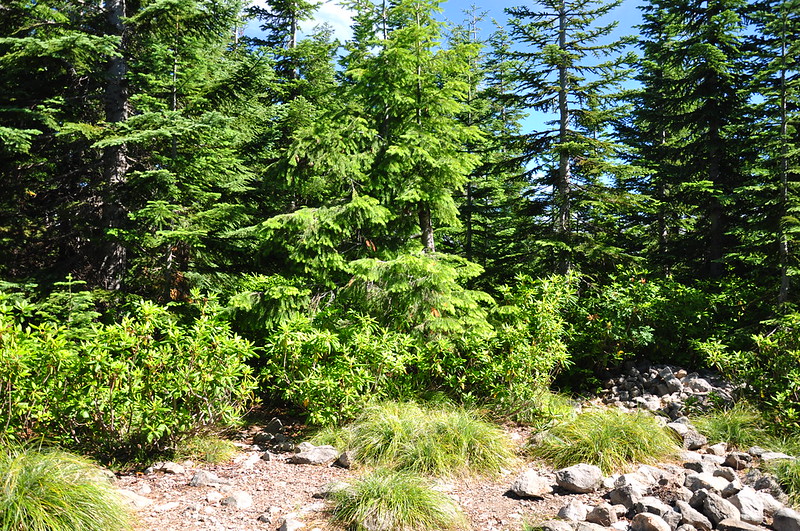 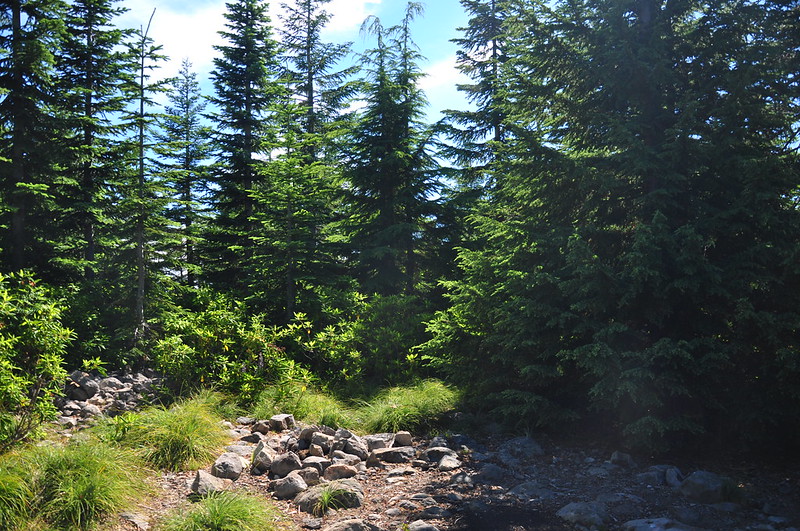 We pushed through the rhododendrons on the east side (it looked like someone at one point had cleared a path here) to a semi-viewpoint. Not really a good place to hang out since the slope is steep here. Some dope actually tried to build a campfire here! 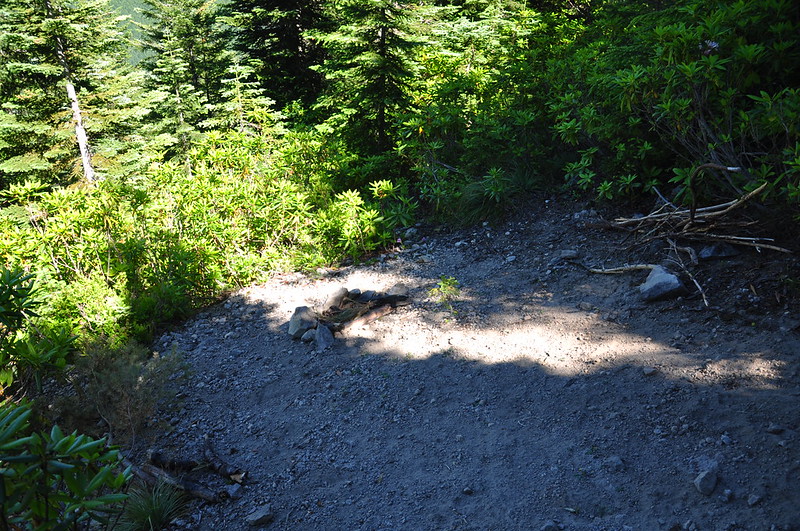 But if you carefully move around you can get some views. Mt. Hood: 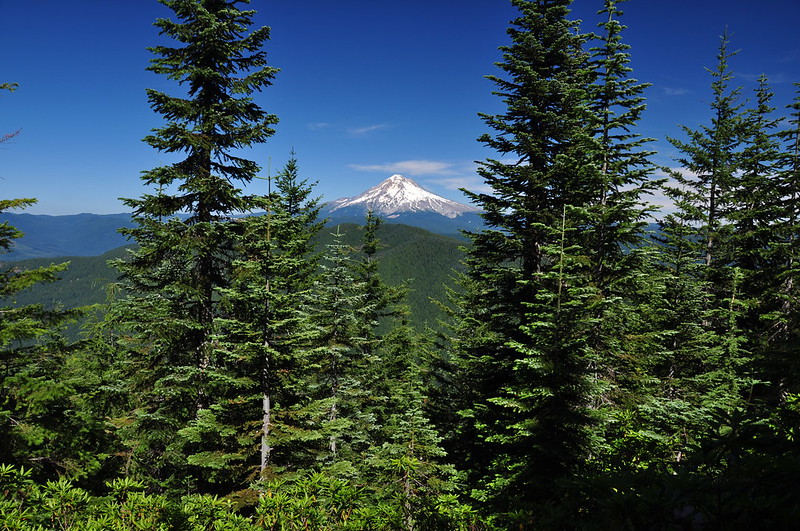 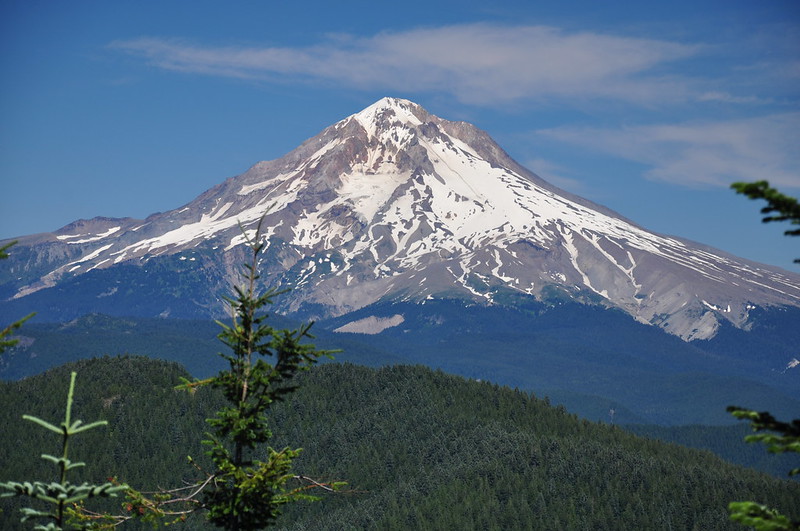 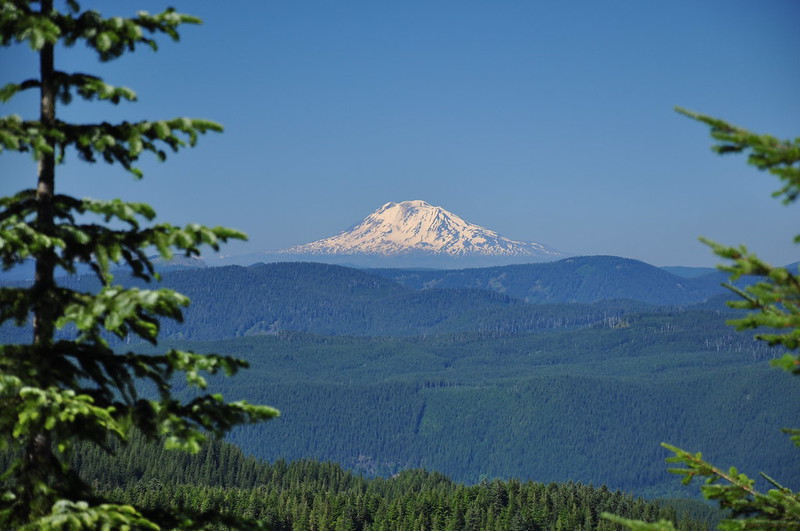 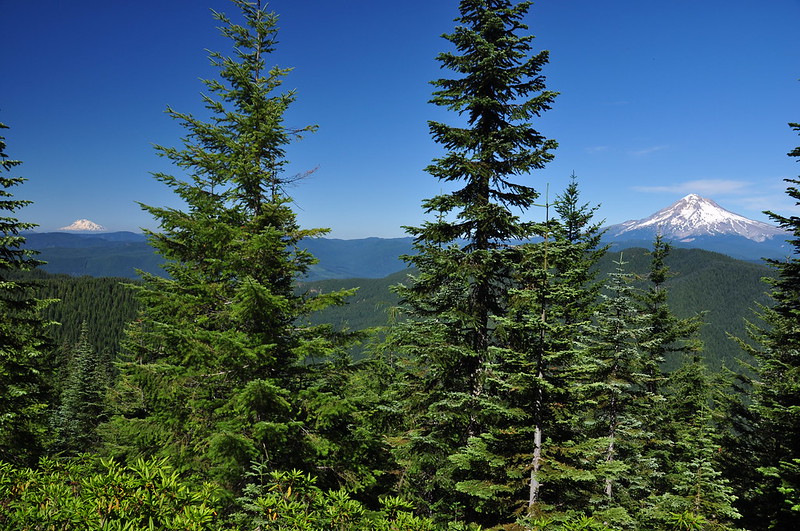 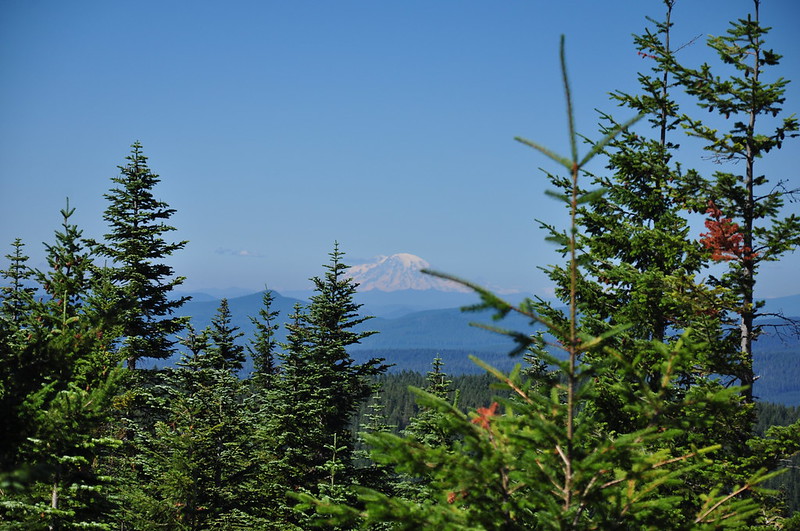 Back down the Douglas Trail to the intersection with the McIntyre Ridge Trail (again, no sign), which we followed north: 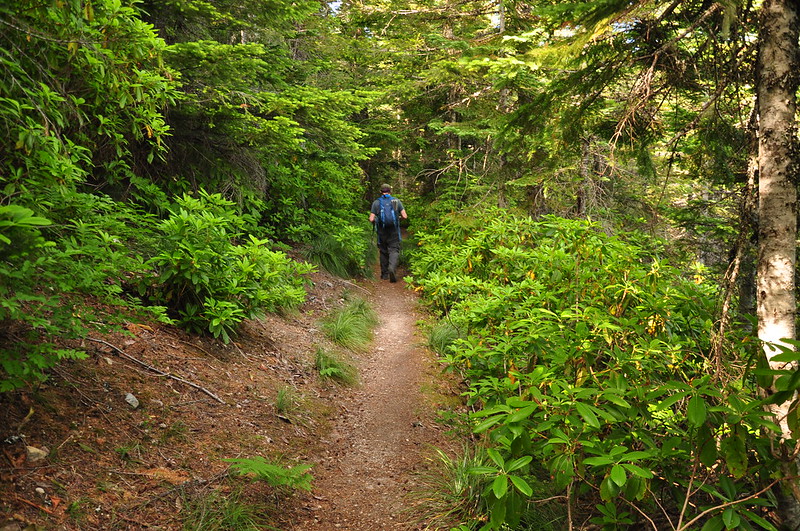 After 0.7mi we reached the fabulous viewpoint with the memorial bench, which is now a recliner: 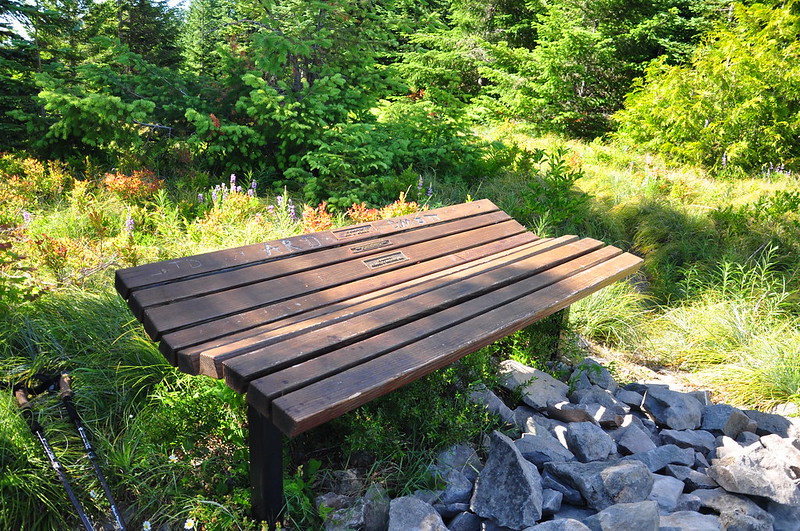 The view was fabulous, with Mt. Hood presiding over the clearcut-free Salmon-Huckleberry Wilderness: 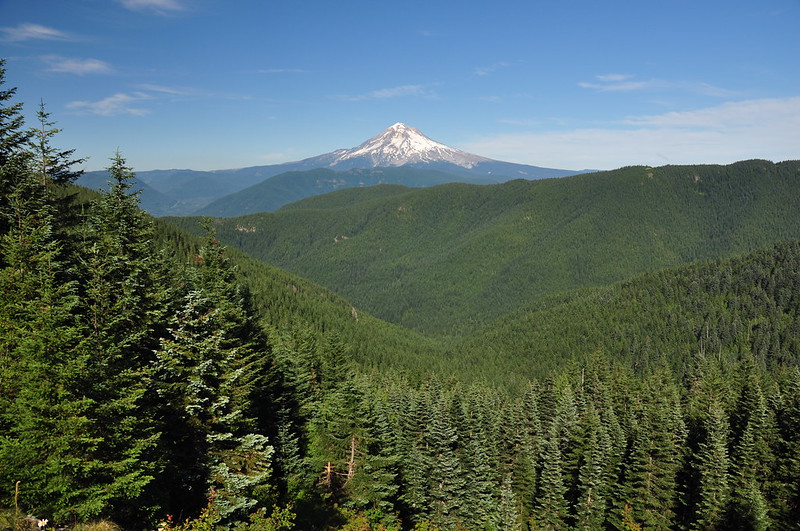 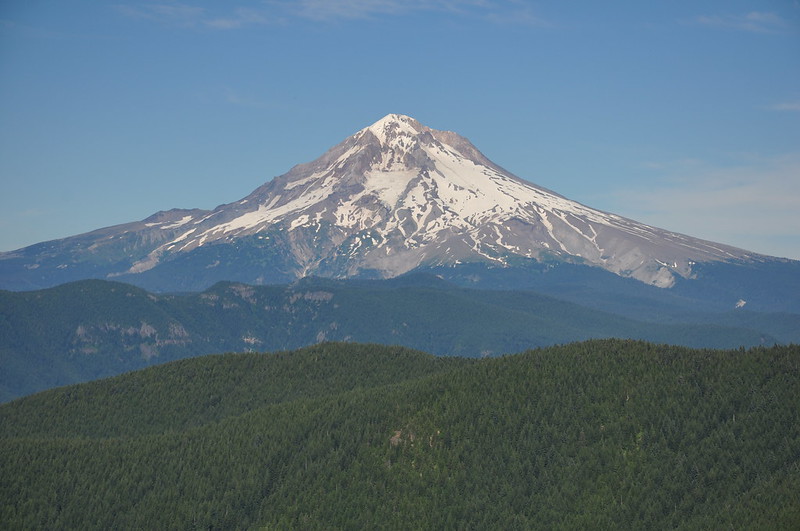 One more minute down the trail past the bench is another nice meadow where the daisies were going gangbusters: 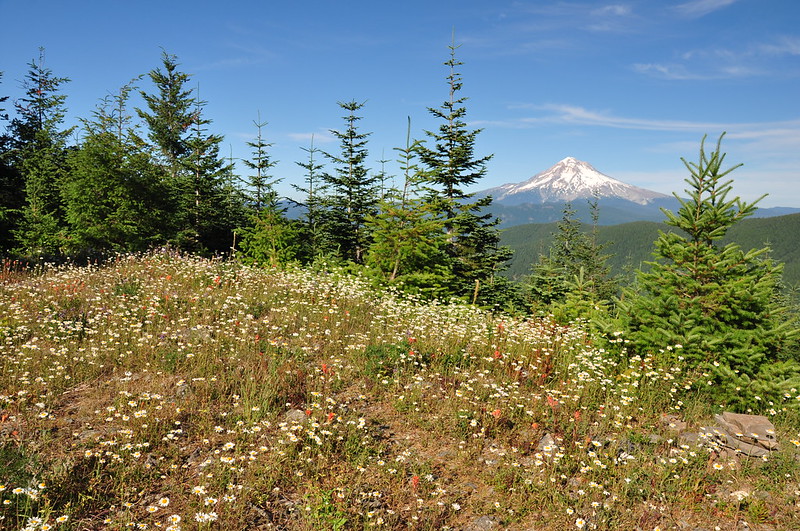 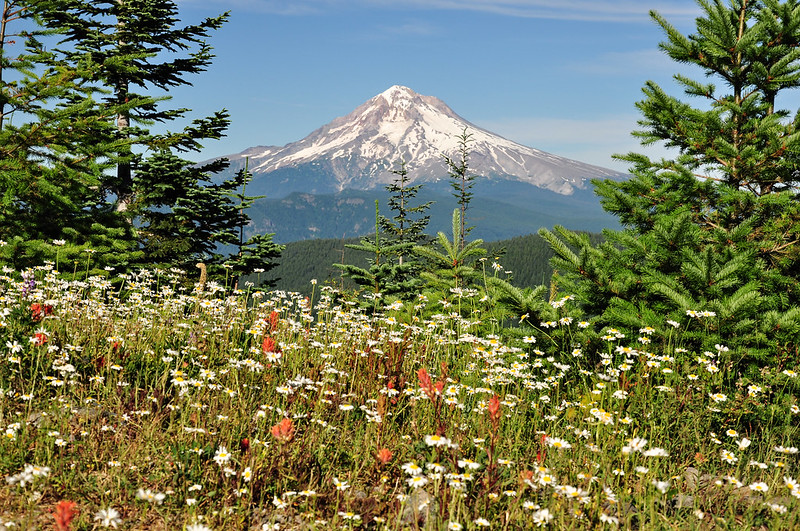 Along with some other wildflowers: 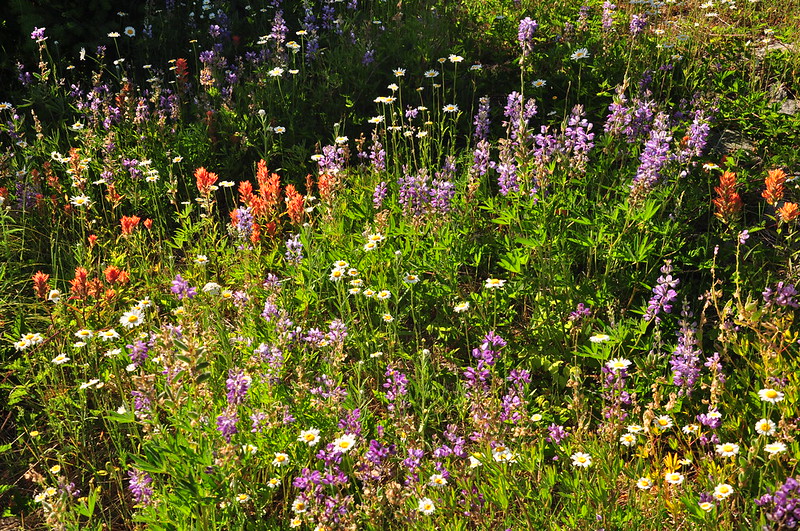 The target shooting had continued off and on throughout the whole hike (boy that sound really carries), but shortly after we arrived at the viewpoint it mercifully ended. We had brought a picnic dinner and some wine with us and sat in the shade enjoying the food and the peace and quiet. 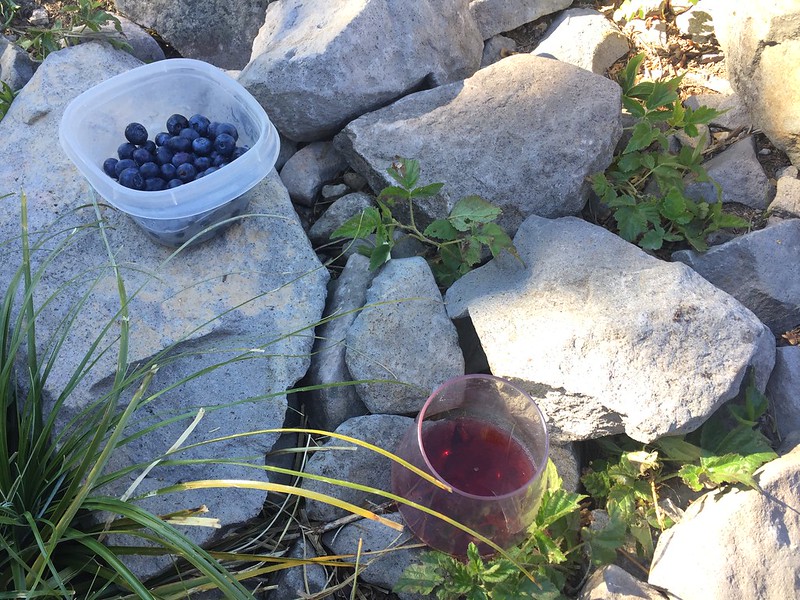 On the hike back down the target shooting started up again. At least we got a reprieve at the viewpoint.