This morning we packed up and headed south out of Jasper National Park, making several stops along the way as drove the Icefields Parkway towards Banff. The weather was cloudy and rainy today, which was disappointing. But at least today wasn’t a hiking day.

Our first stop was Leach Lake, which was calm and deserted on this cloudy morning. 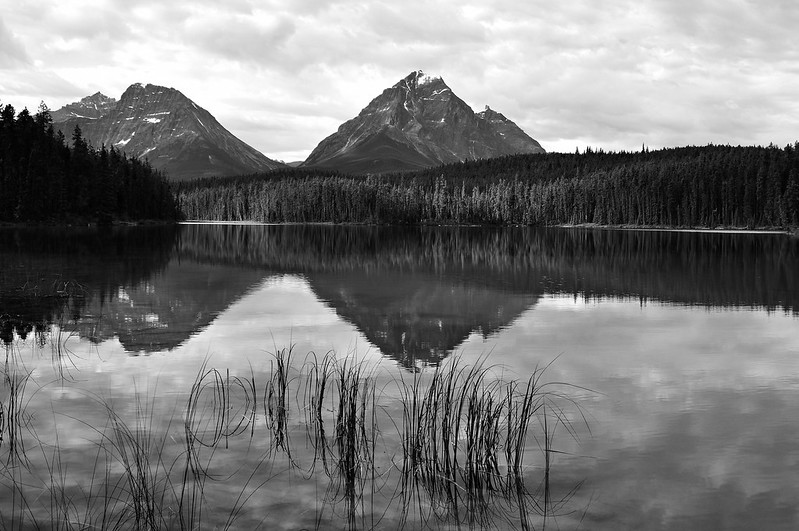 Athabasca Falls was thunderously impressive. What you can’t see in this photo are the hoards of people and the plethora of awful selfie sticks. 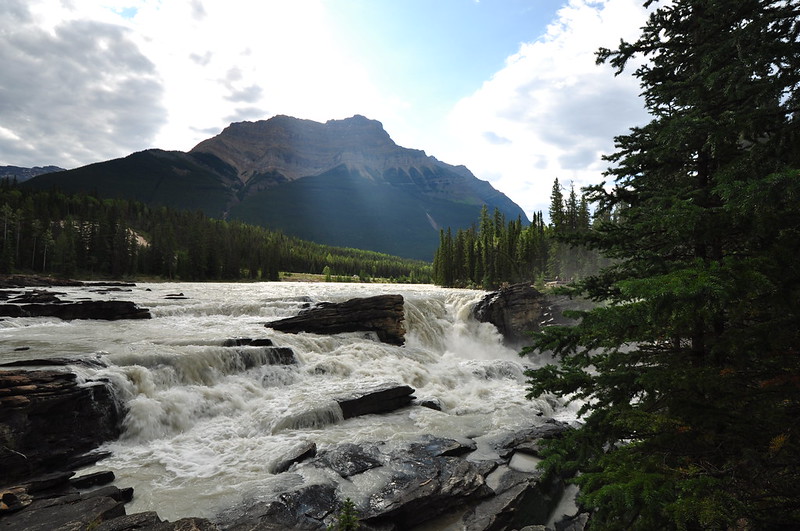 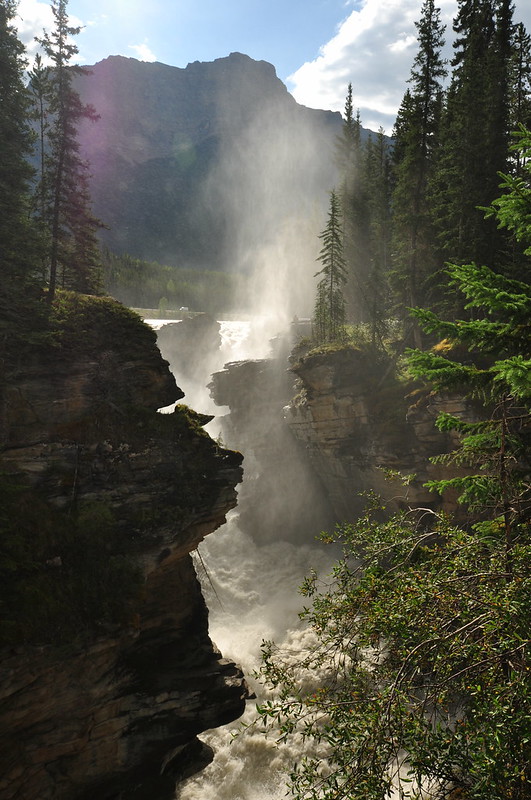 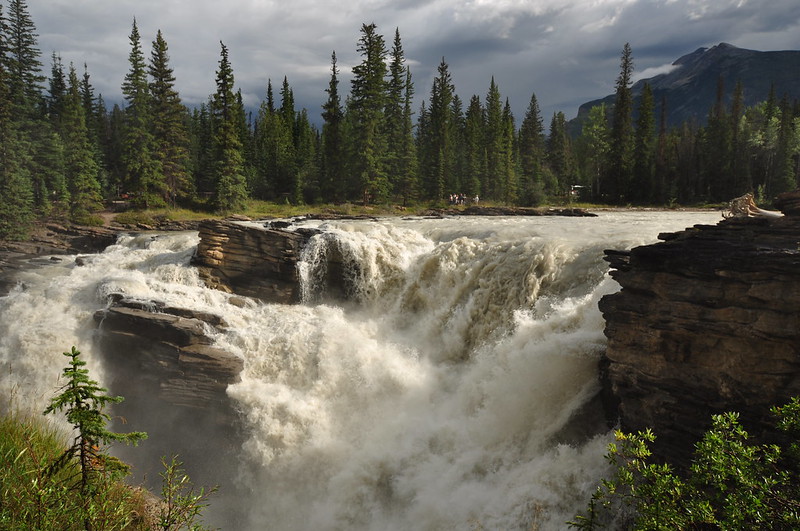 We stopped at Sunwapta Falls, which was a tad less crowded. 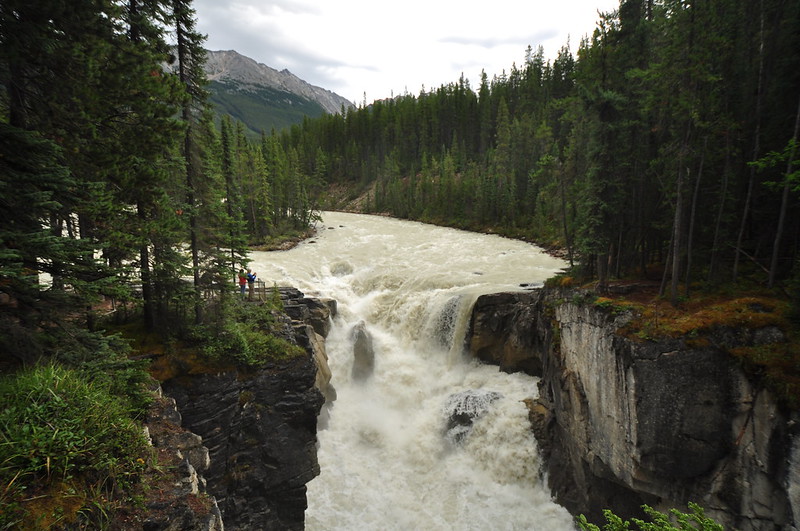 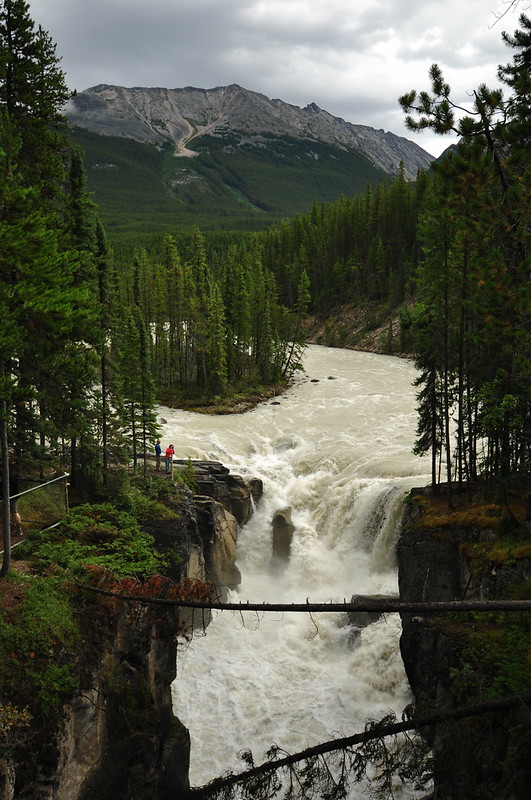 We stopped at this neat roadside pullout called Bubbling Springs on the map, but it was totally unsigned from the road. There’s a picnic area and a little natural pool of quicksand. Super cool! 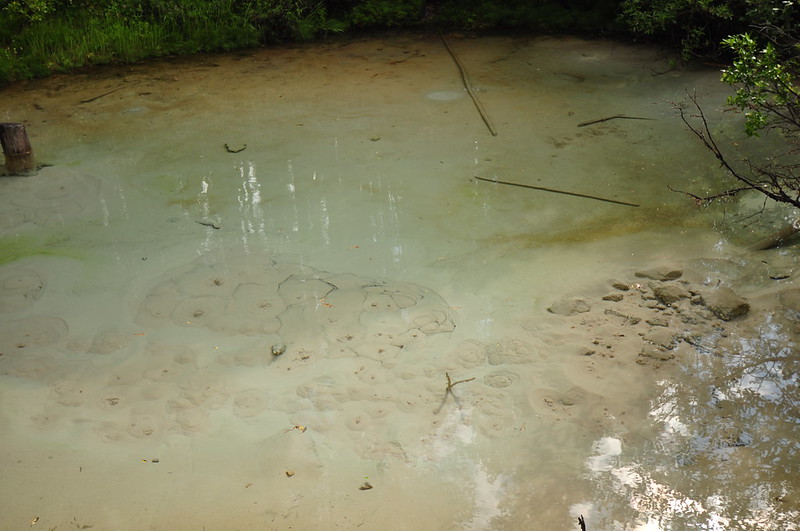 We pulled over at the Mushroom Peak viewpoint along the Sunwapta River. It was a beautiful spot although in terms of photography the light was dreadful. This is Tangle Peak to the south: 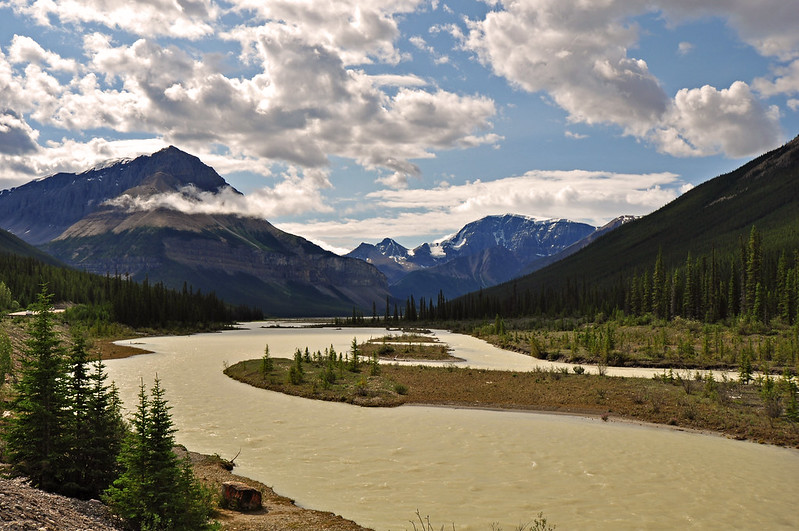 Tangle Falls is right alongside the road: 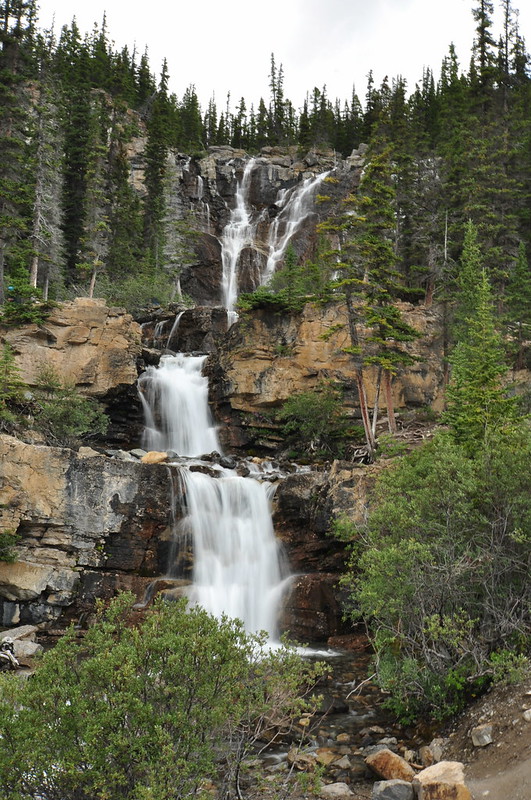 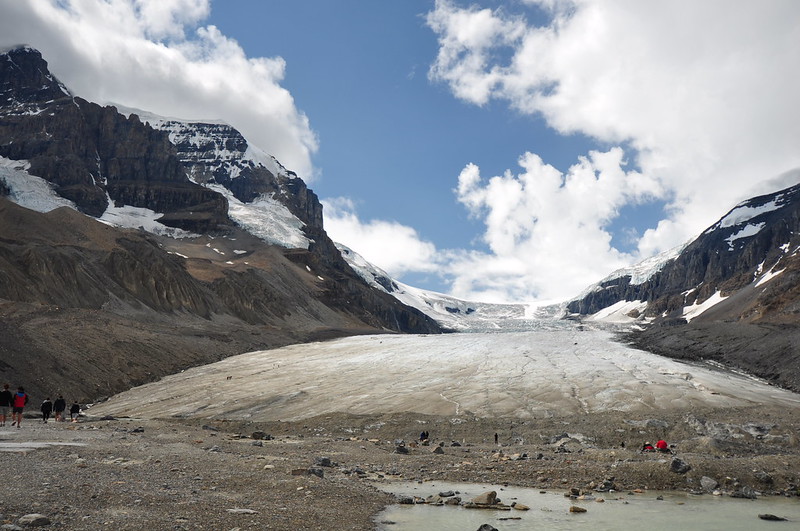 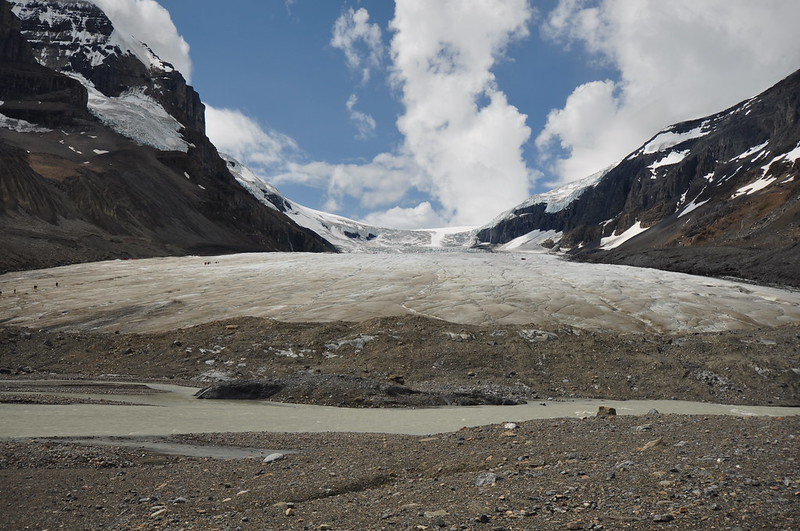 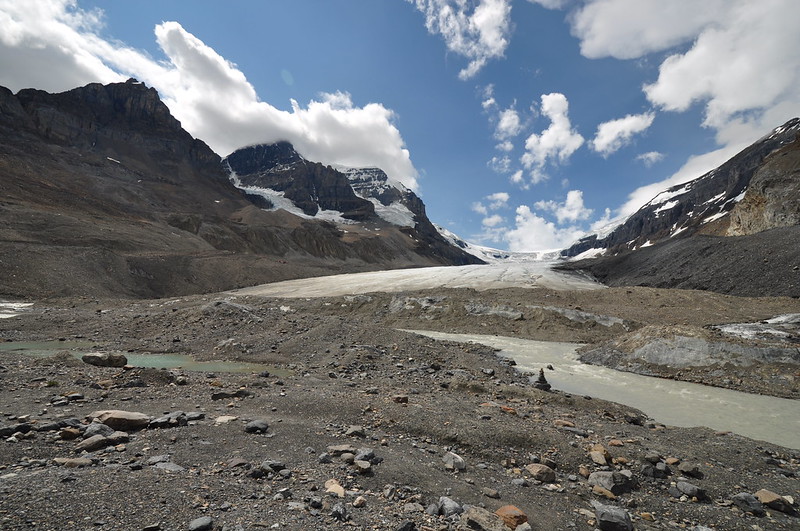 Dark ominous clouds were gathering to the north and they looked to be headed our way. 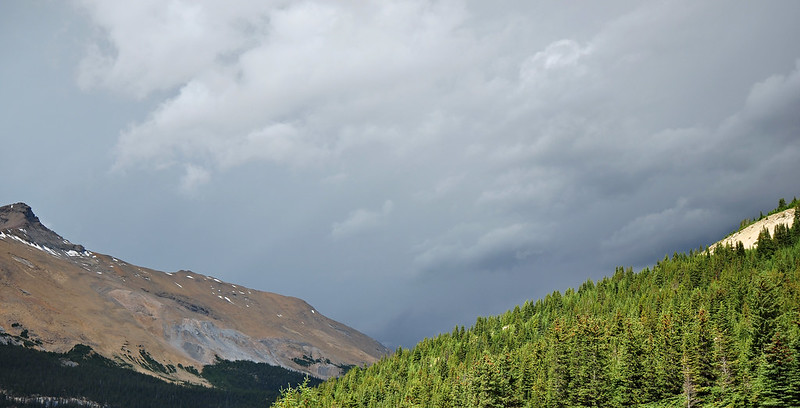 So as soon as we were done checking out the glacier we retreated to the Columbia Icefield Centre across the highway where we bought an overpriced lunch and through some minor miracle managed to snag a little table by the window. 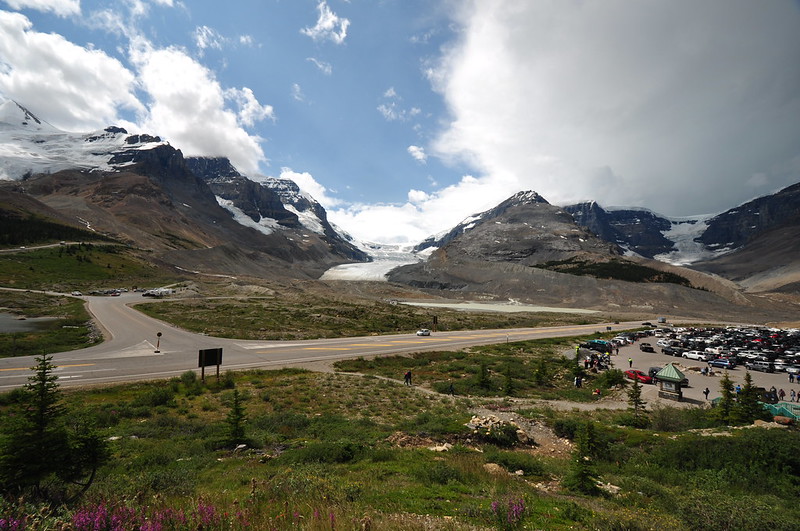 As we sat there eating and admiring the view, the storm arrived and it was a doozy. It was a hail storm like I’ve never experienced before. The hail was pouring off the roof and through the downspouts, piling up everywhere like snow. It was crazy! 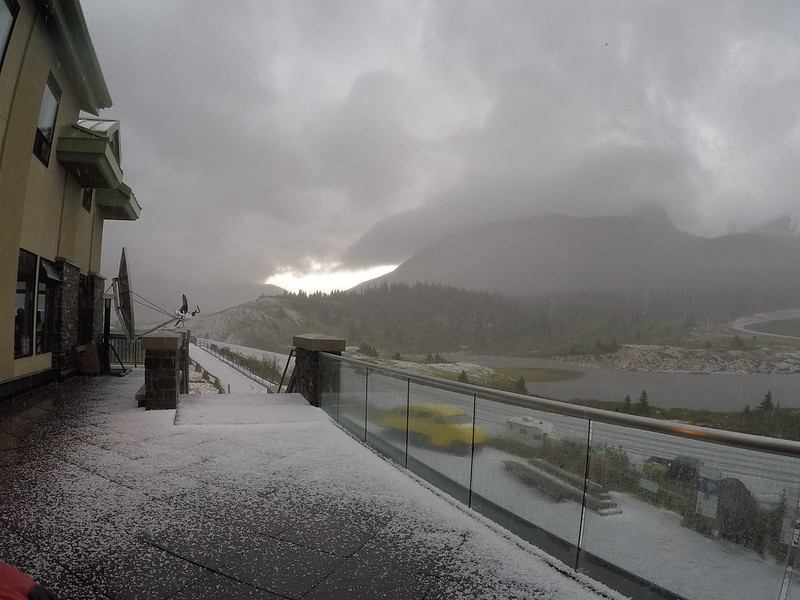 The hail ended after about 10 minutes, but it was still raining and I had left my rain jacket in the car. Greg ran to the far end of the parking lot to get the car while I waited at the building entrance for him. While standing there, a guy from Hawaii who had just arrived asked if all the white stuff everywhere was hail or snow. Then a woman asked me if it was safe to drive with all the hail everywhere.

We stopped at Mistaya Lake. Unfortunately the weather and the light were both pretty terrible : 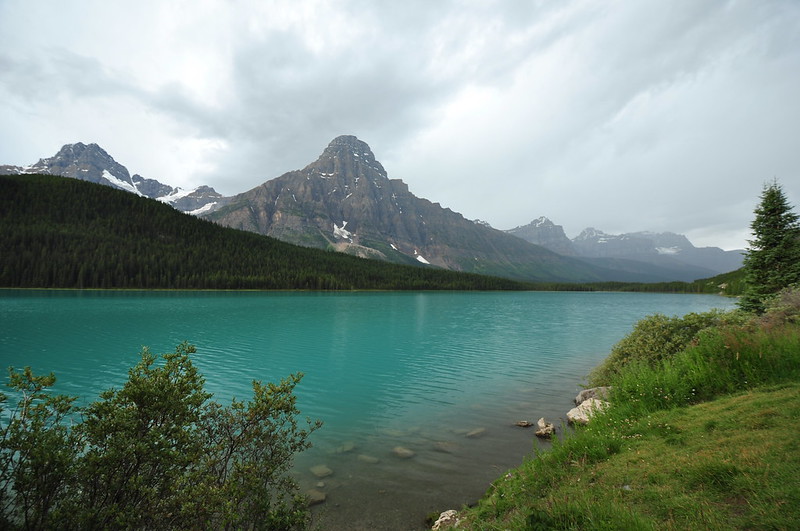 Our final stop before connecting up with Highway 1 was Hector Lake: 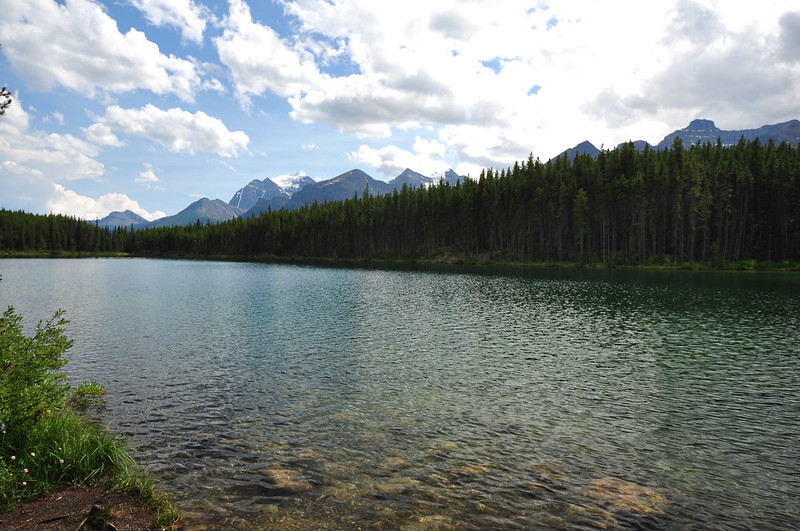 We checked into our hotel in Canmore, went out for dinner, then Played Mr. Jack at the hotel room before turning in for the night: 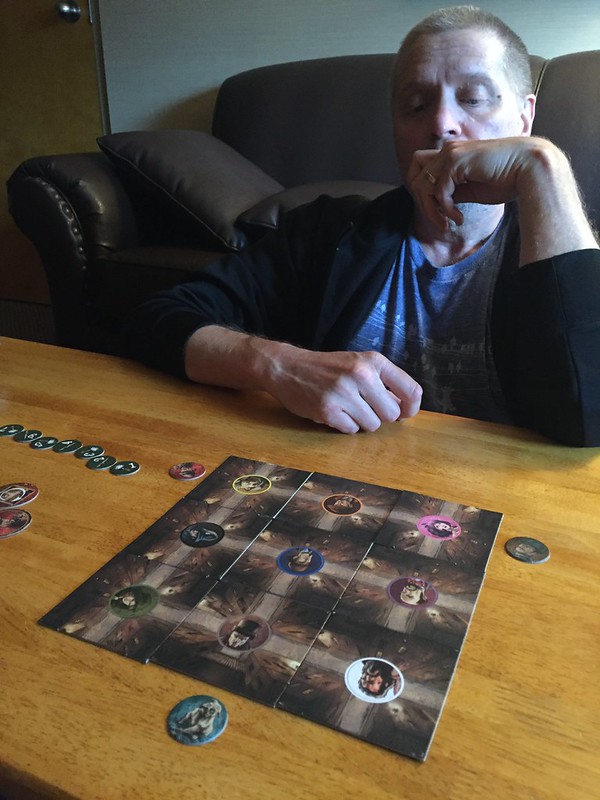 Another pounding rain storm passed through around 10:30 that night.