After canceling the rest of our North Cascades trip because of the cloudy weather, Greg and I hung around Portland waiting for the weather to improve, then headed up to Elk Cove for a quick one-nighter before the dreaded Monday return to work. Glad we did, since the wildflowers were AWESOME! 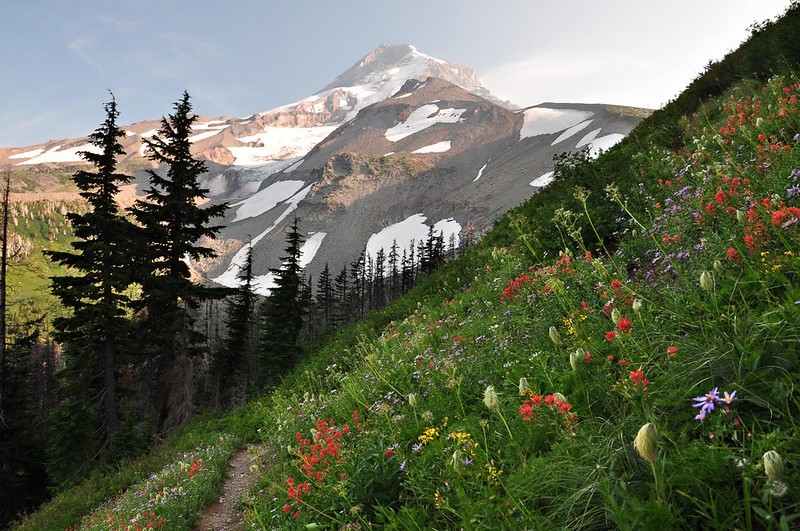 On the drive up, just pass Lolo Pass we got stuck behind a slowpoke Lexus that was moseying along at about 15 MPH. It refused to pull over to let us pass, even though they clearly weren’t sure where they were going. We finally got past them where Road 16 goes straight (which they started to do) and you have to make a hairpin turn onto Road 1650.

There were 15 cars at the teeny tiny trailhead when we got there, and five more (including the Lexus) pulled in before we hit the trail. That parking lot is WAY too small.

The burn area has lots of fireweed in bloom right now. 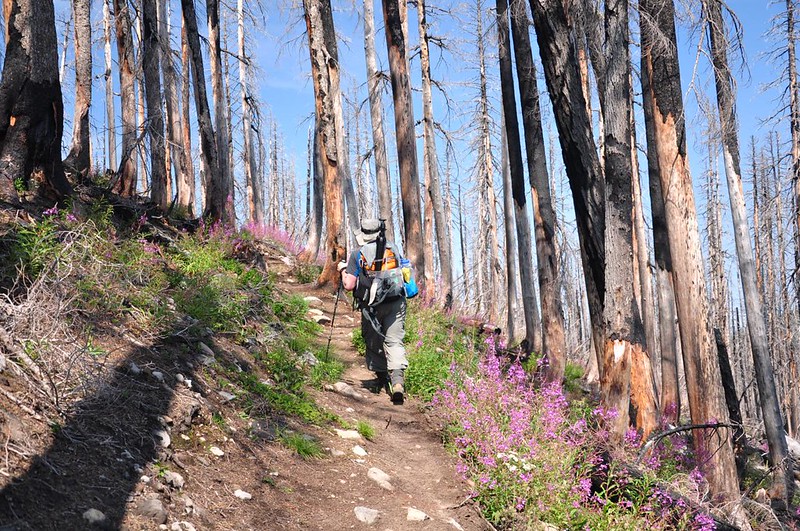 Less than a mile from the wilderness registration box, shortly after a switchback, is a stretch of trail where the huckleberry bushes managed to escape the flames. They were absolutely LOADED with berries! Nom, nom.

Once we hit the Timberline Trail the wildflower show began in earnest. 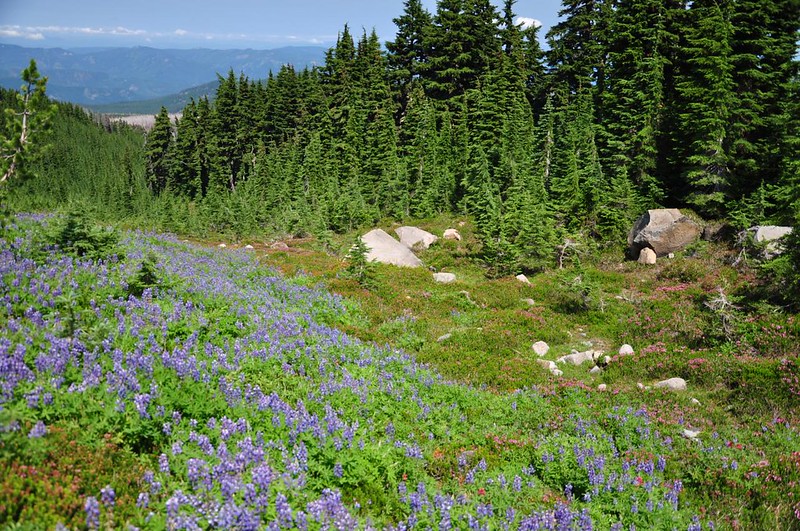 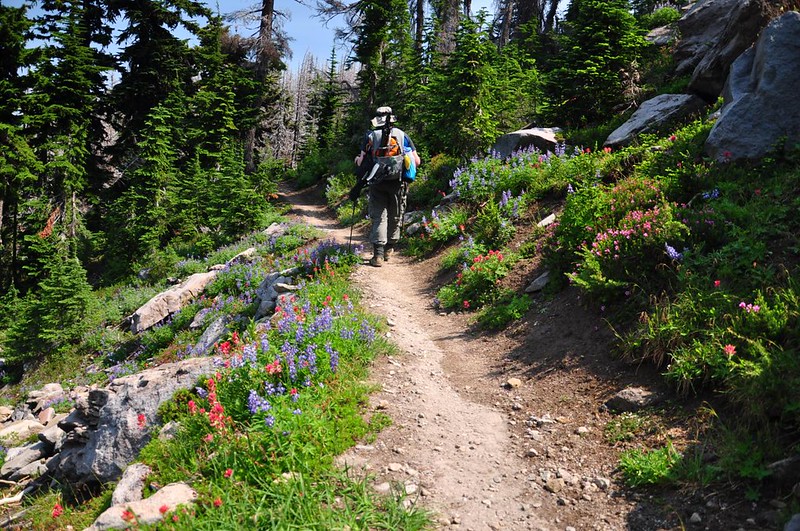 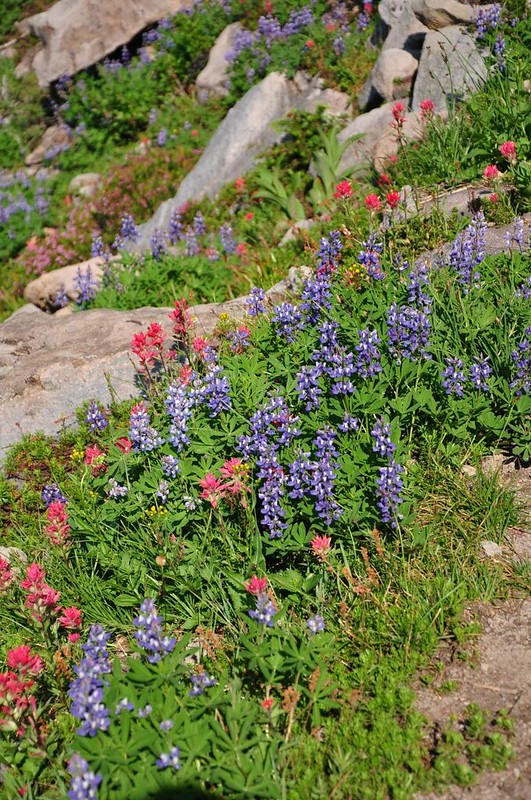 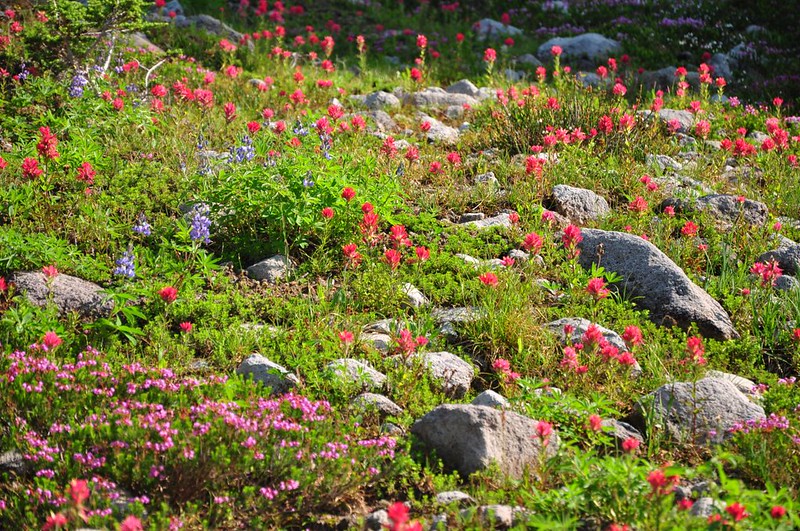 We even saw some lingering glacier lilies. We speculated that there must have been snow lingering there later into the summer than the other areas. 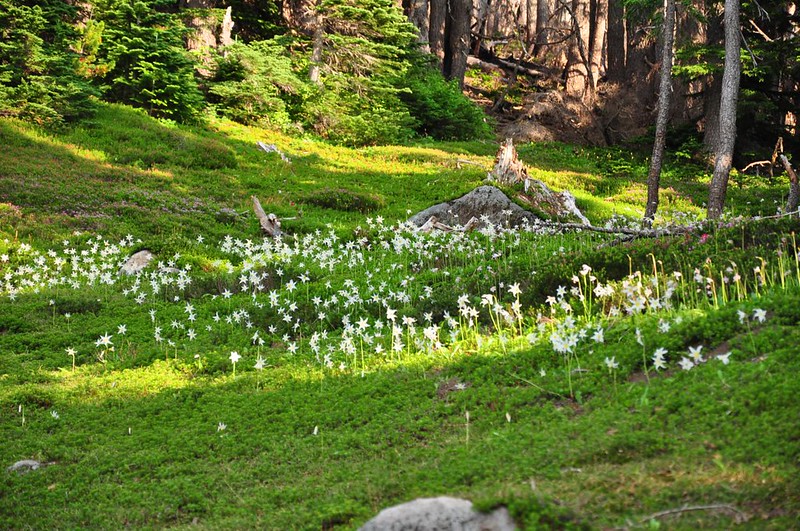 The flowers at Elk Cove weren’t too shabby either. 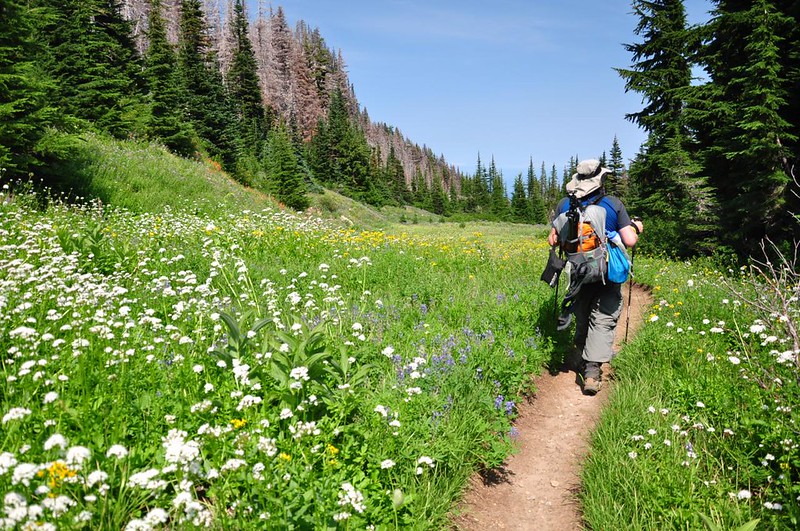 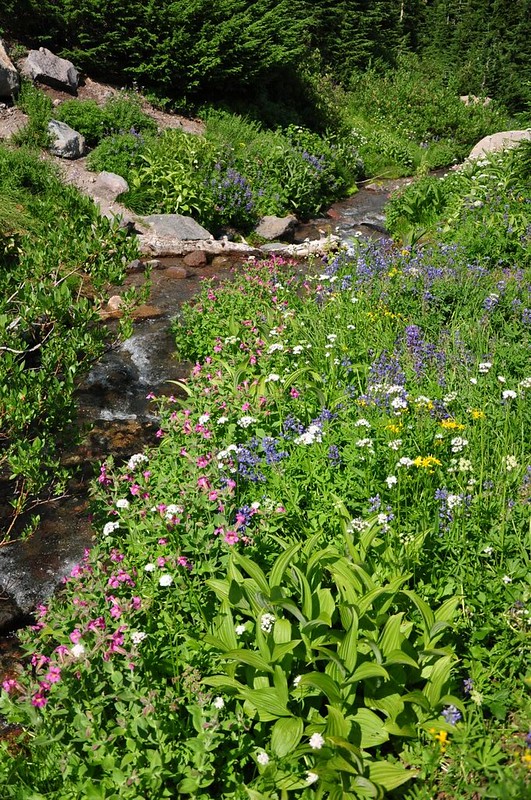 The campsites are along the Elk Cove Trail, so after crossing the creek we turned down there and started looking. We only saw two sites and one was taken, so we took the other. We later discovered that it was literally a toilet, with tp bits scattered under the trees near our site. We even found unburied poop out in the open. Ick. The flies and mosquitoes were much worse at the campsite than by the creek. 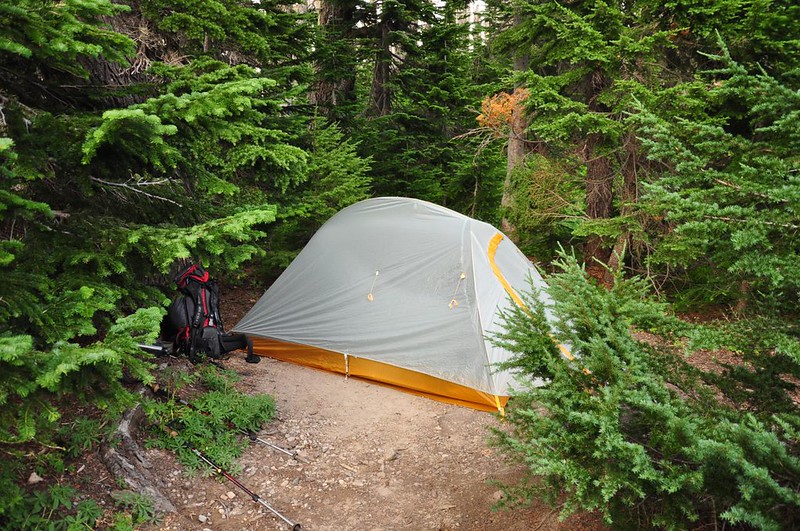 It was a hot day so we went and sat by the creek for awhile, took our boots off, and cooled down. That water was COLD! 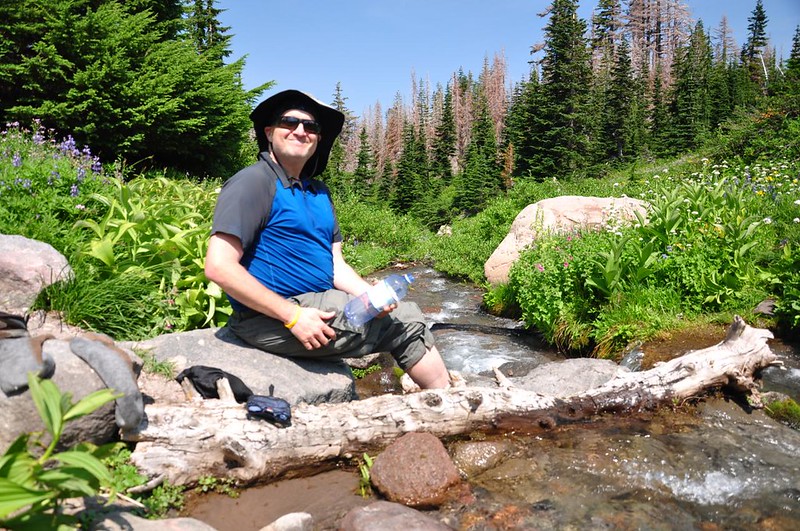 Greg wanted to see Cairn Basin and a lovely stretch of creek just beyond there and above the Timberline Trail. So we headed back that way, moving faster now without our heavy packs. Views to the north were hazy. No Washington volcanos visible. I wasn’t aware of a fire in the area, but we did repeatedly hear and see a helicopter in the Owl Point vicinity with a water bucket beneath it. 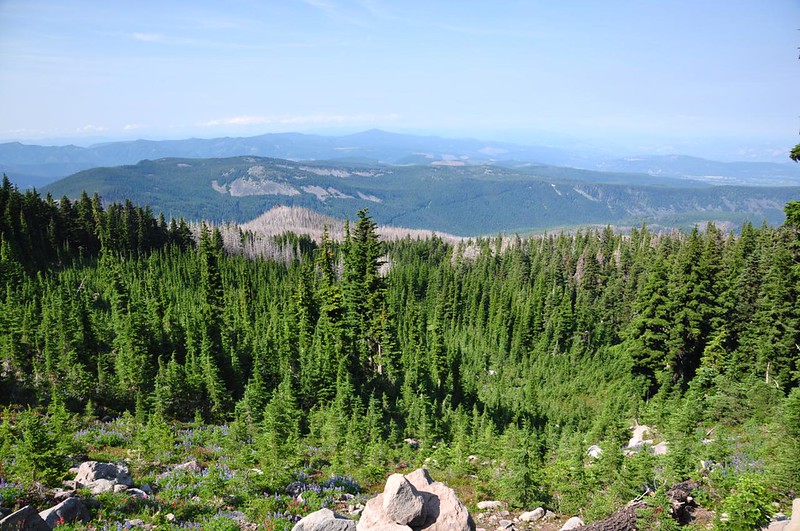 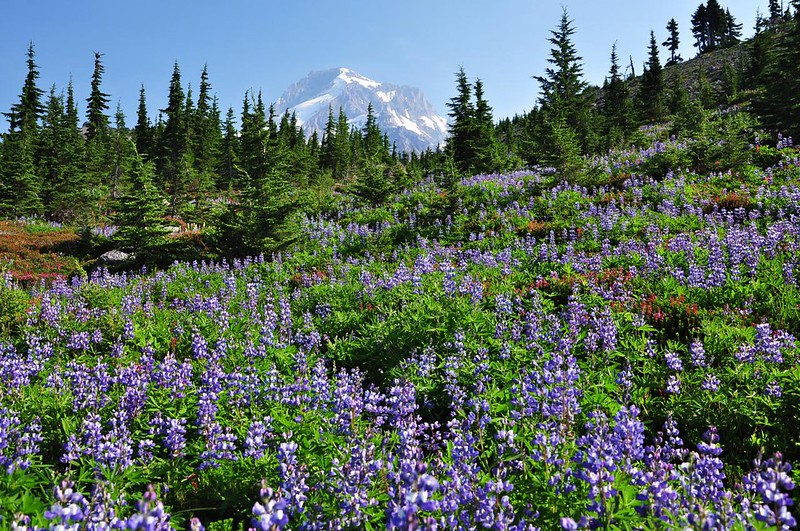 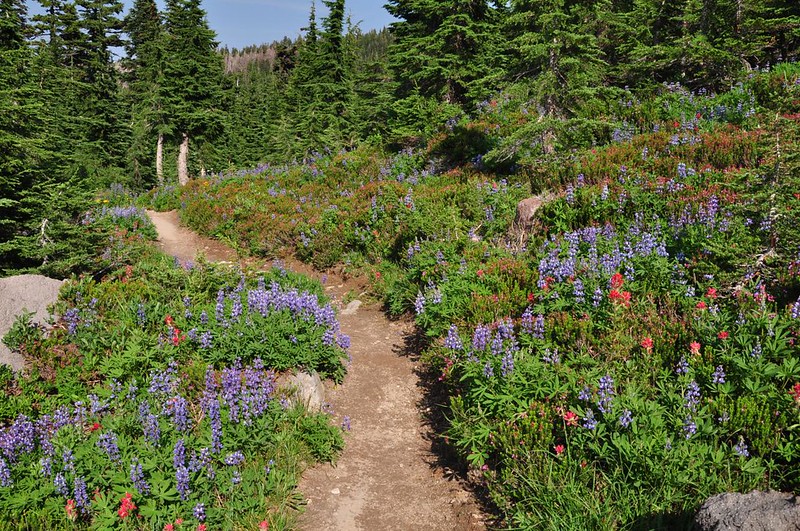 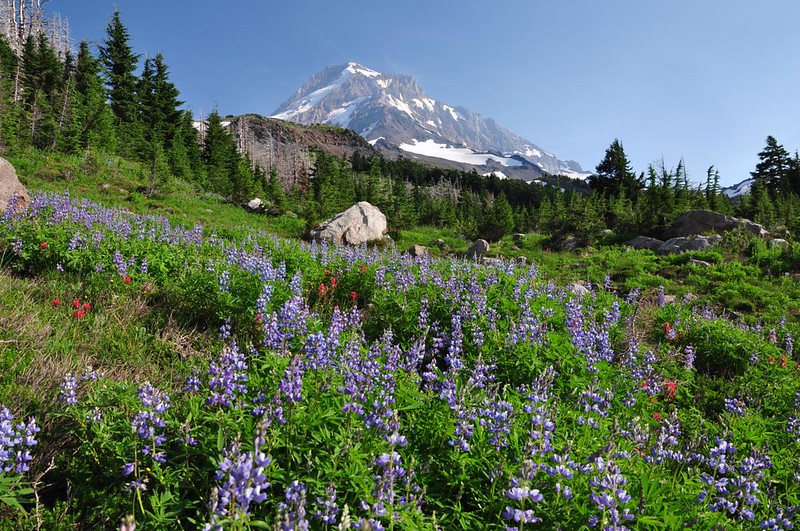 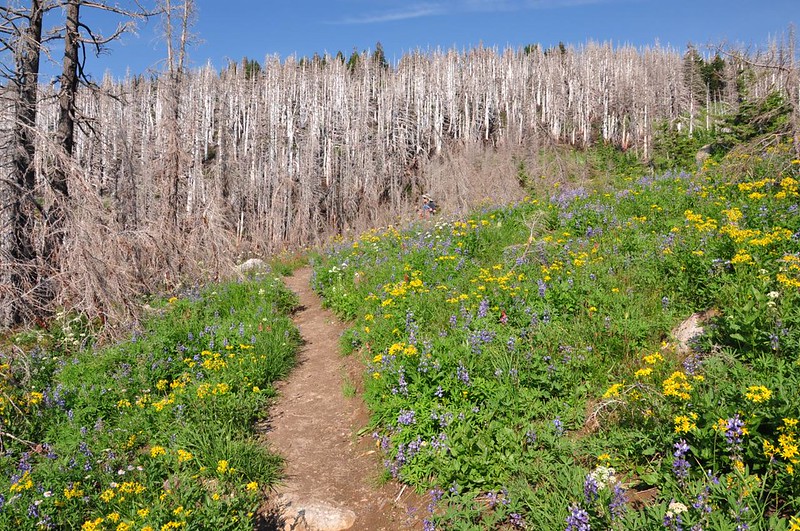 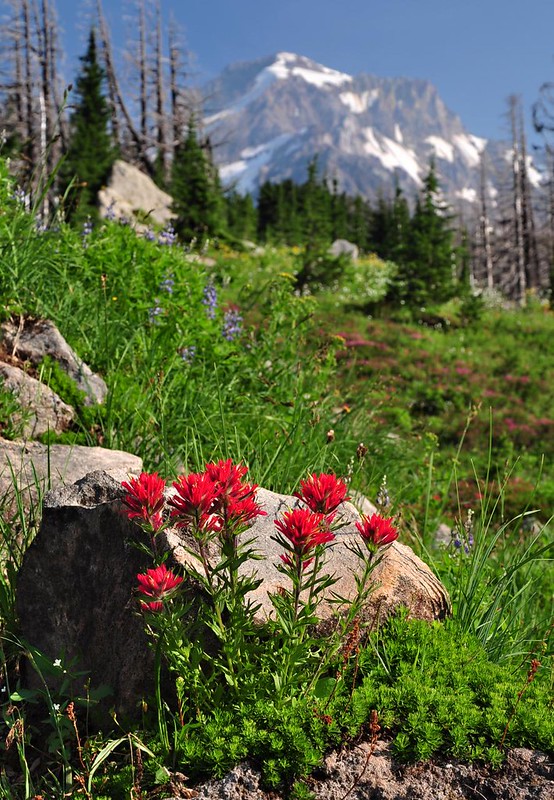 At the top of the descent down to Ladd Creek I declared hunger and decided to head back. Greg decided he wanted to head back too. The light on Mt. Hood was looking pretty nice as descended into Elk Cove. 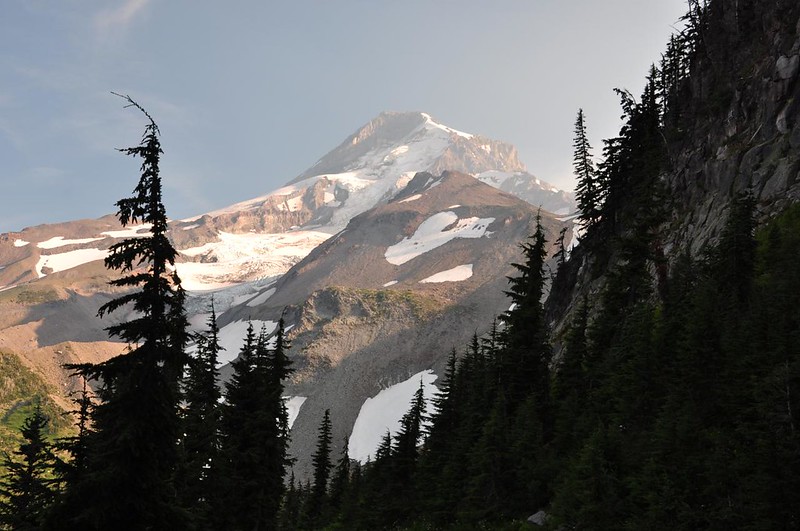 I took more shots of that fabulous creek. This is, by far, the most enchanting stretch of creek I have ever come across in all my hiking travels. I adore it. 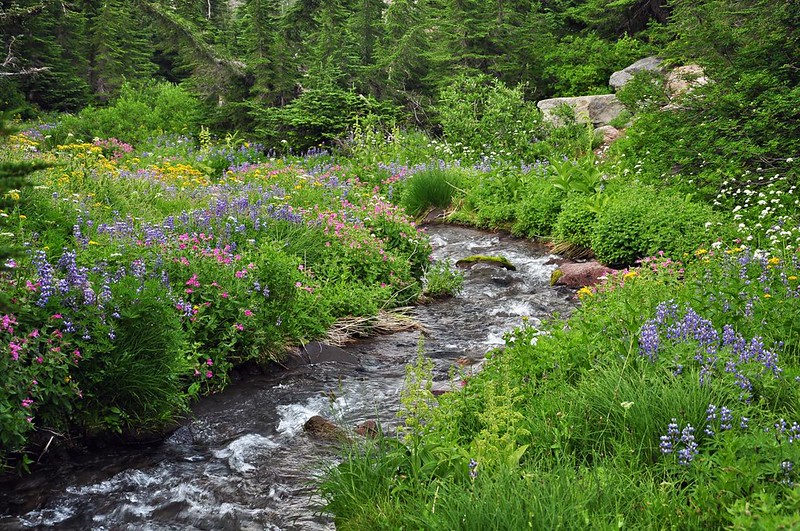 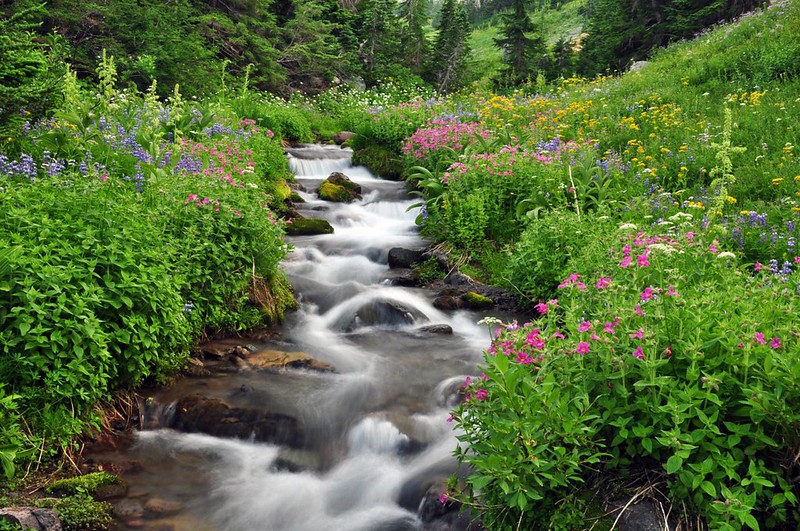 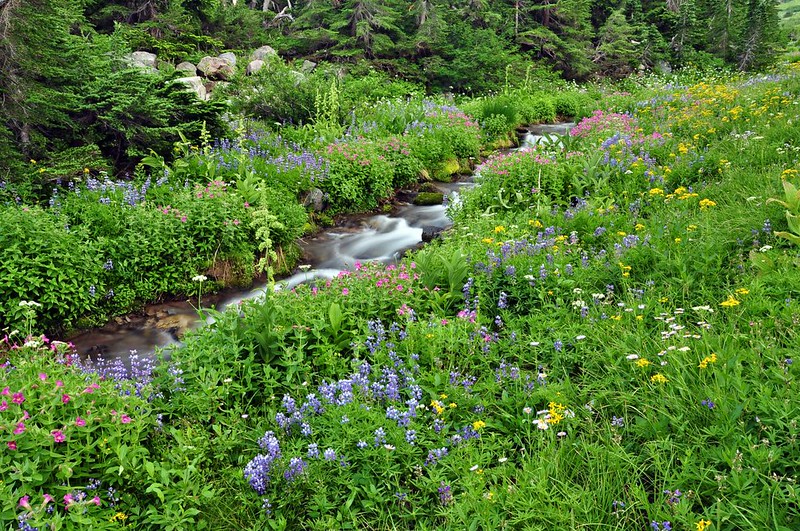 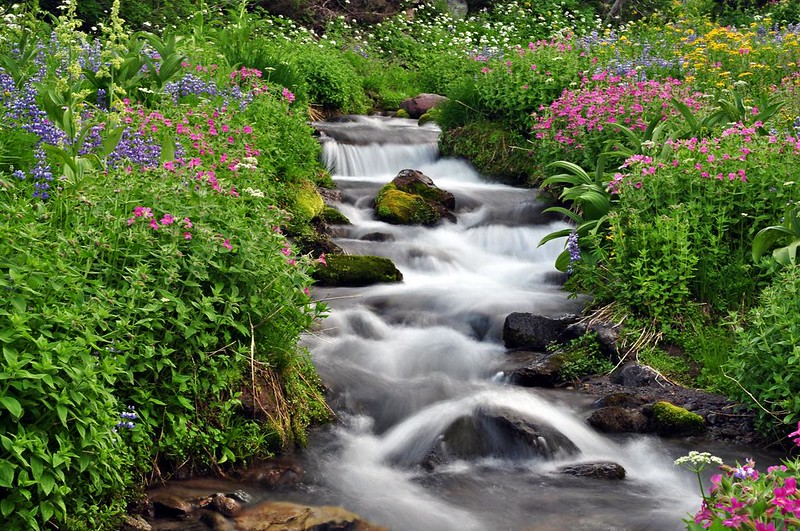 We were too tired to stay up and wait for the stars to come out, so we went to bed before it was dark. When I got up for a bathroom break at 4am I saw that Mt. Hood was illuminated by the quarter moon. NICE! 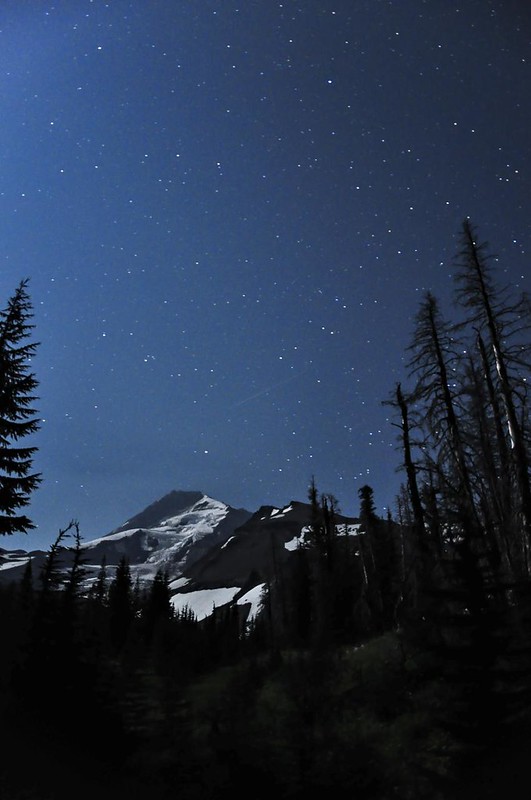 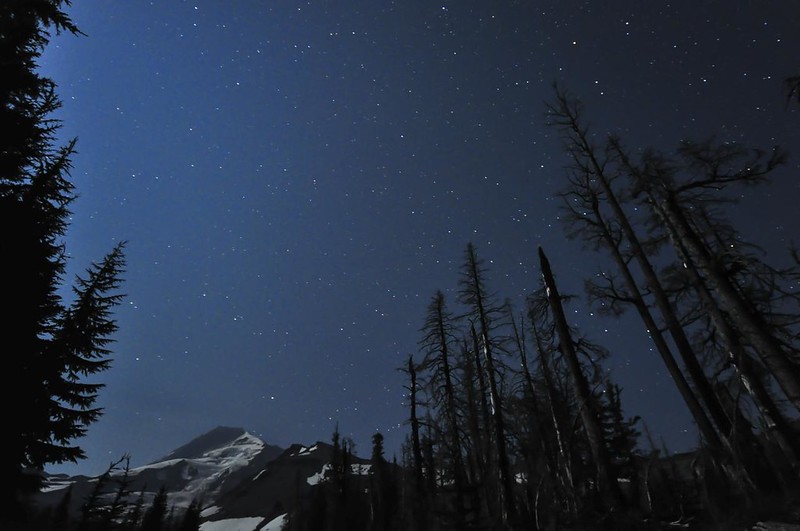 In the morning we took our time with breakfast and packing up, lingering and enjoying the quiet before the hoards of day hikers arrived. 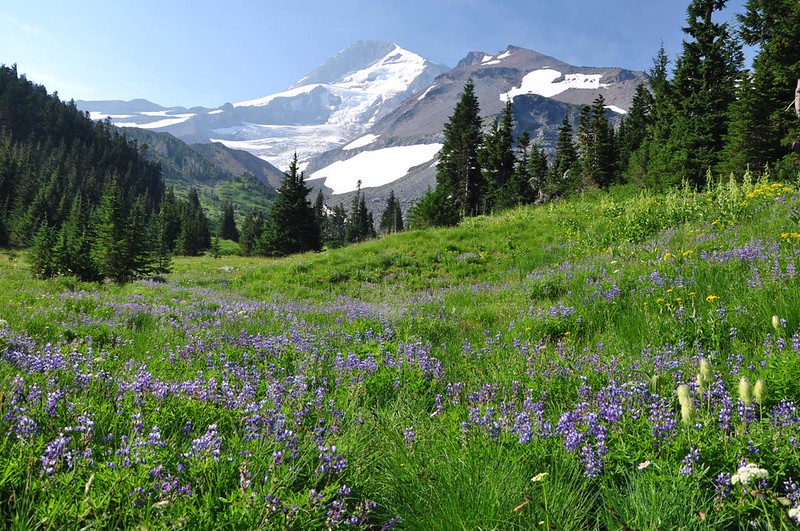 On the hike out, just above Elk Cove, a hummingbird flew into my shot! You can make it out below the row of paintbrush on the left. Neato! 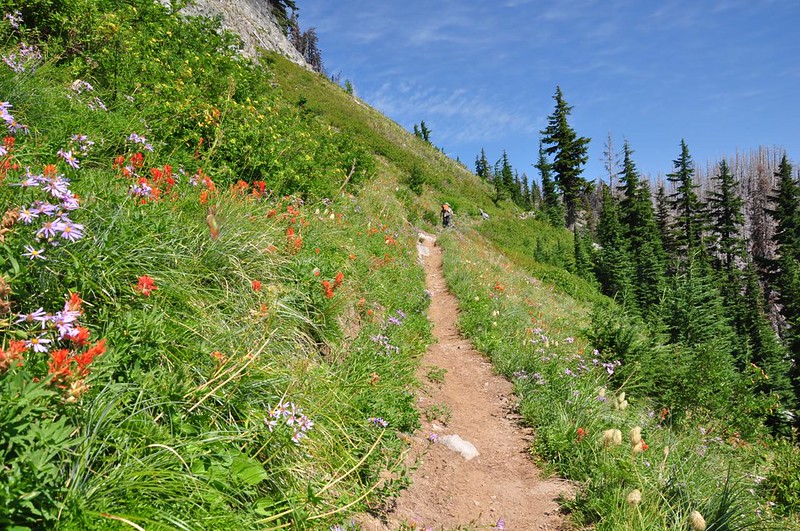 It was still hazy, but we could just make out Mt. Adams. 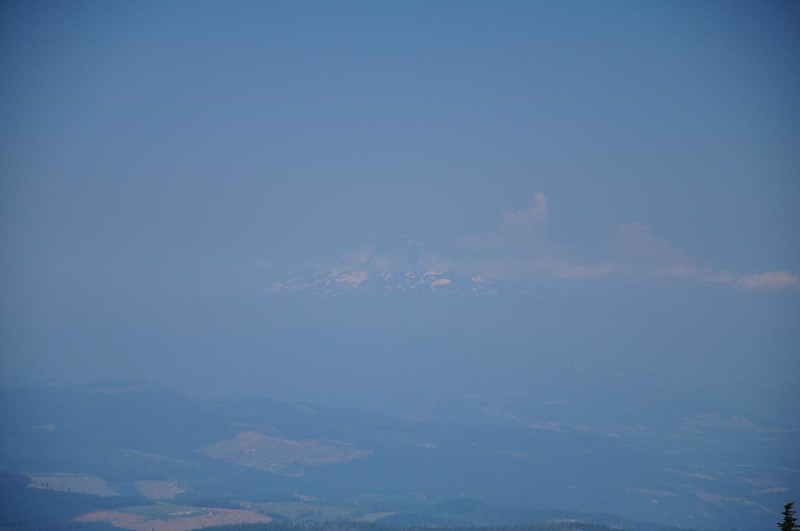 On the way back down the Vista Ridge Trail we took 15 minutes to gorge ourselves on huckleberries. There were SO MANY. I have never seen such such a huge, healthy, abundant crop before. 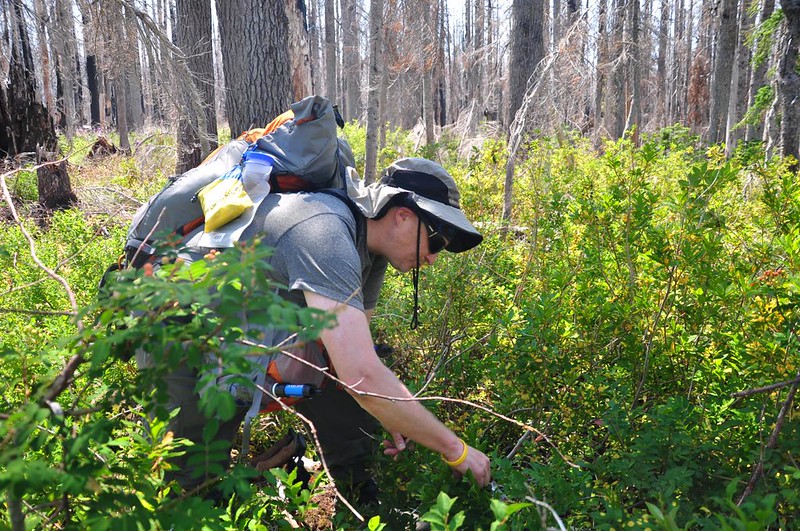 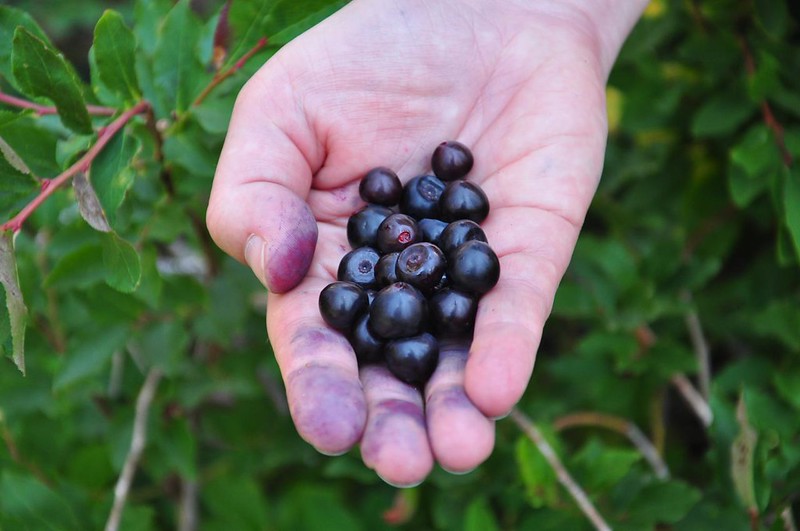 Elk Cove has a tie with Paradise Park for being my favorite spot in the Mt. Hood Wilderness. Glad we got up there at the right time for some sunshine and wildflowers. Such a beautiful area up there.