When we woke up this morning, all traces of yesterday’s clear weather had vanished and the skies were completely overcast (so much for the “partly sunny” forecast). We drove up to Artist Point anyway, where we planned to hike the Chain Lakes Trail. We hoped things would be different there. Maybe we’d be above the clouds. Nope. This was the “view” of Mt. Shuksan from Artist Point: 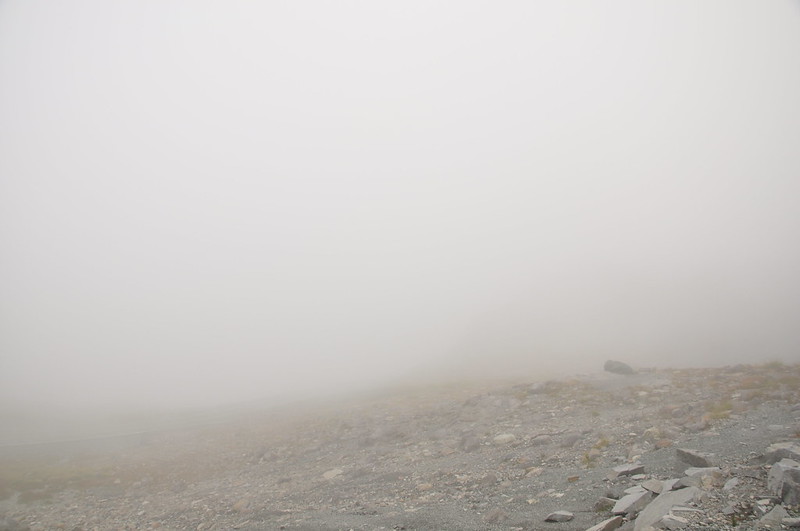 How disappointing. This trip was plagued with bad luck. We’d only had three clear days so far, and one of them (yesterday) was spent mostly in the car. We decided to do the hike anyway and see what would happen. 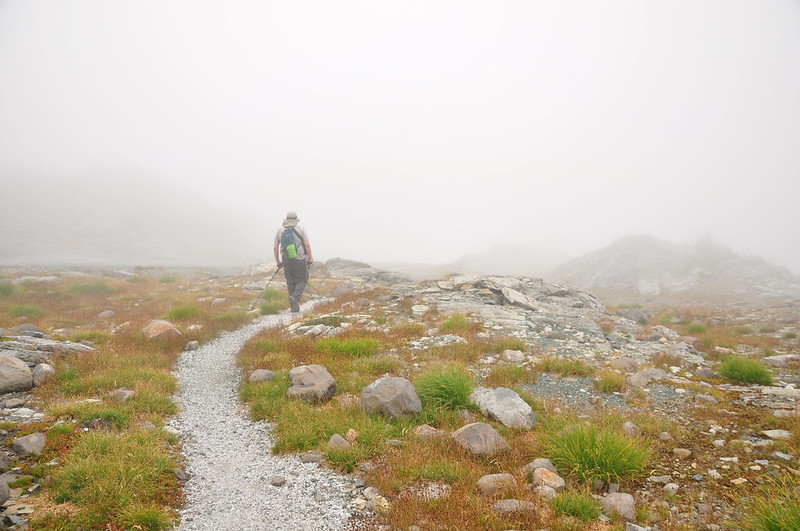 The trail descends from Artist Point and heads towards the Austin Pass trailhead and Bagley Lakes, all of which we could see below us: 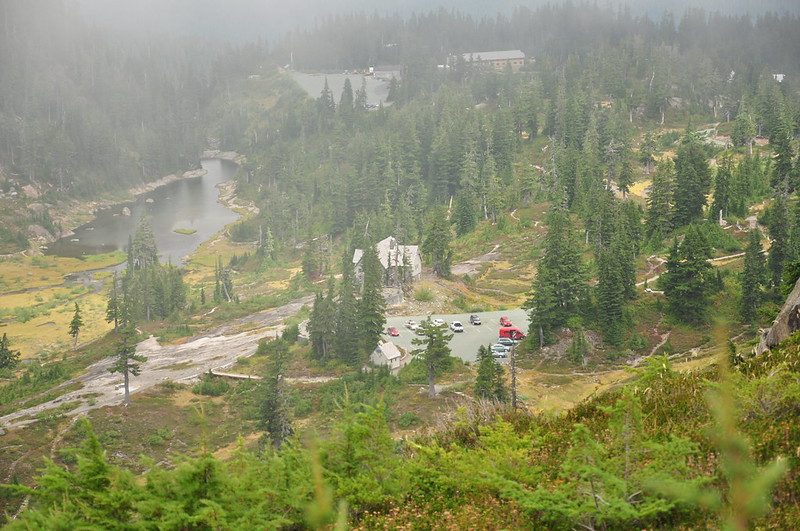 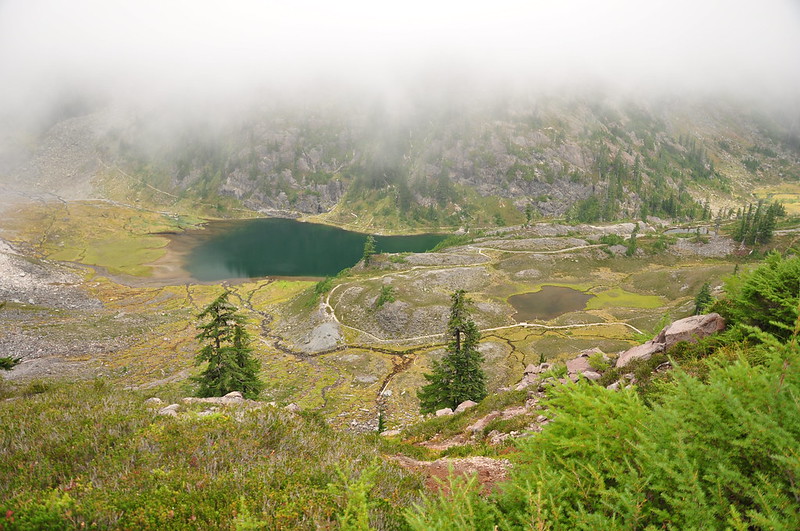 At Austin Pass we stopped in at the Heather Meadows Visitor Center. This neat old building was built by the Civilian Conservation Corps in 1940. Those guys really knew how to build structures that last, and attractive structures at that. This building was originally built as a warming hut for skiers, but now serves as a Forest Service information center. 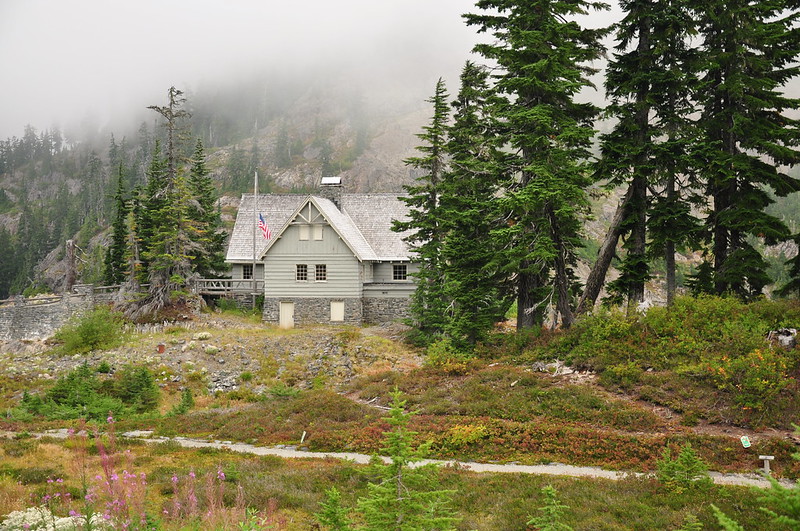 After the Visitor Center we descended the trail down to Bagley Lakes. This is looking back: 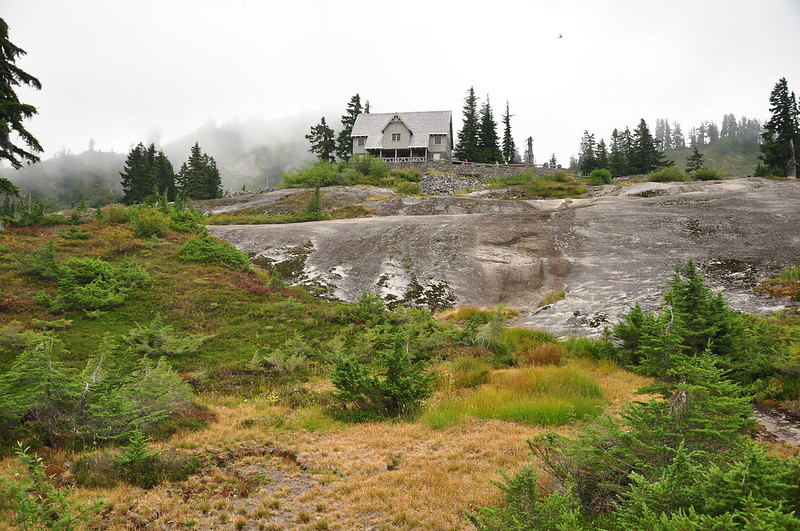 In addition to Bagley Lakes there are a few smaller lakes, more like ponds. 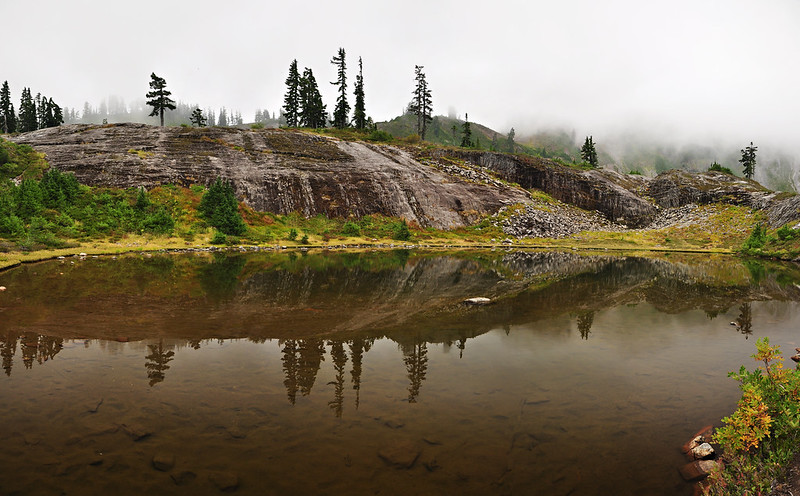 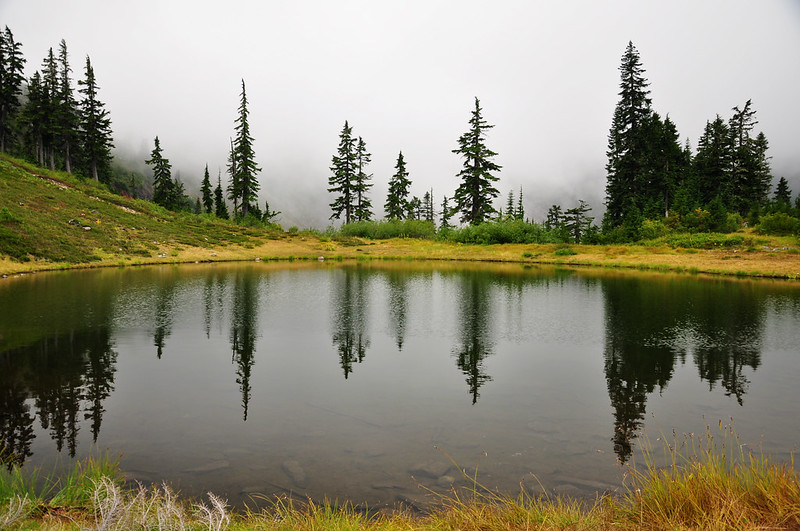 This photo by Eric Rolls shows how the scene just above should have looked:

We crossed a beautiful stone bridge: 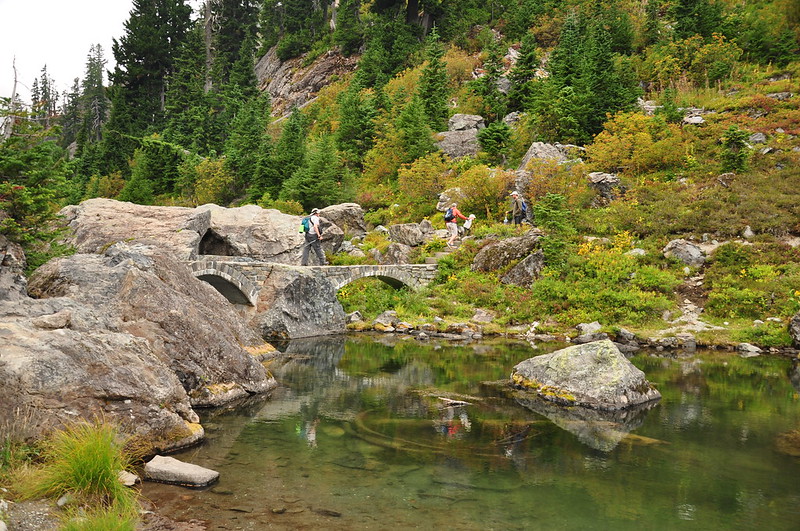 Then the trail climbs up, up, up toward Herman Saddle: 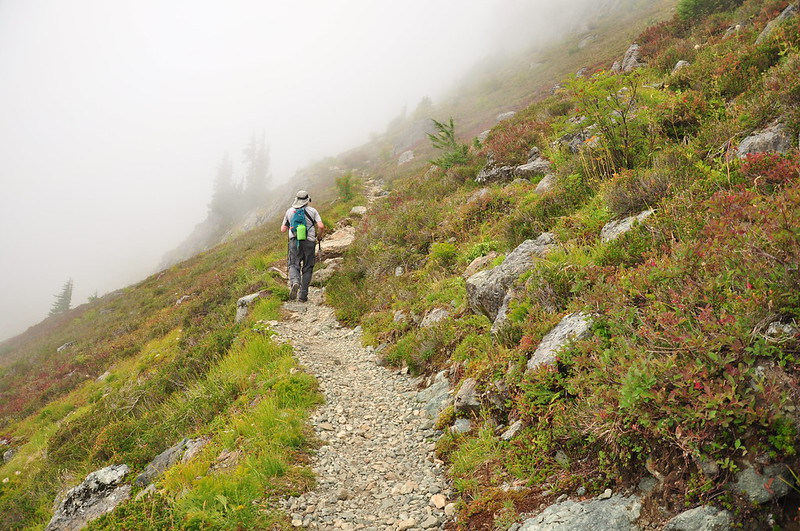 After which we went down, down down to Hayes Lake: 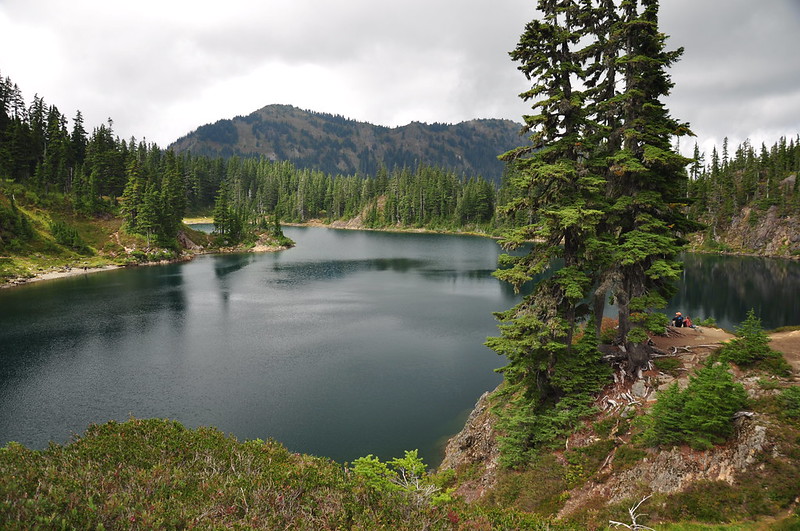 Just beyond is Iceberg Lake, where we stopped to have a snack, and caught a brief glimpse of a patch of blue sky. The mountain on the right is Table Mountain, which we had hiked up the evening before: 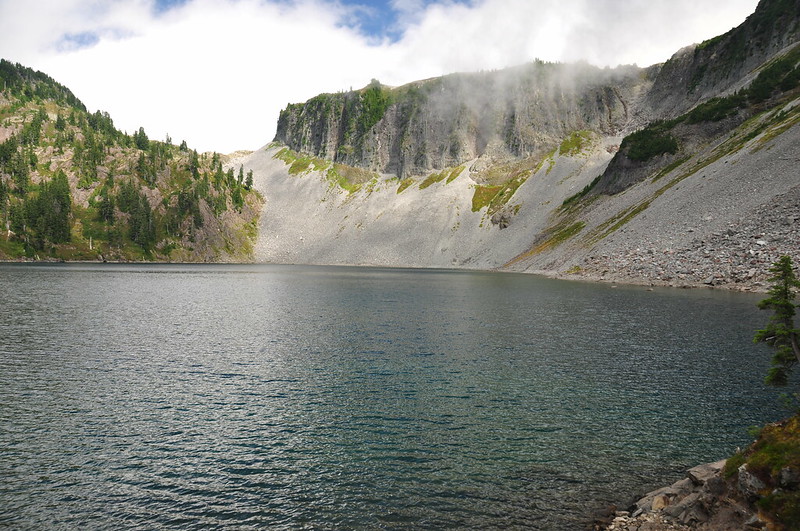 Iceberg Lake is really low. All this gravel area should be underwater:

After resuming our hike we passed by Mazama Lake: 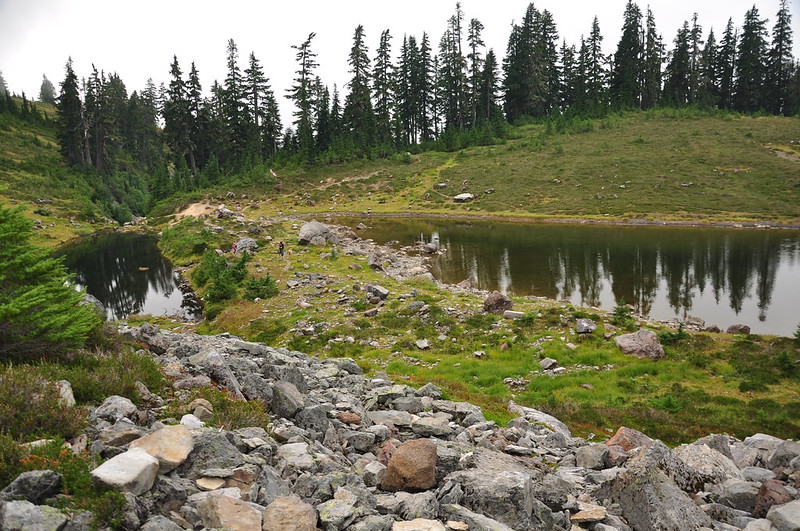 See those people down by the lake? They had an off-leash dog that was running around everywhere, trampling the sensitive alpine vegetation. Dogs are not allowed off-leash here, but I guess these people don’t care. 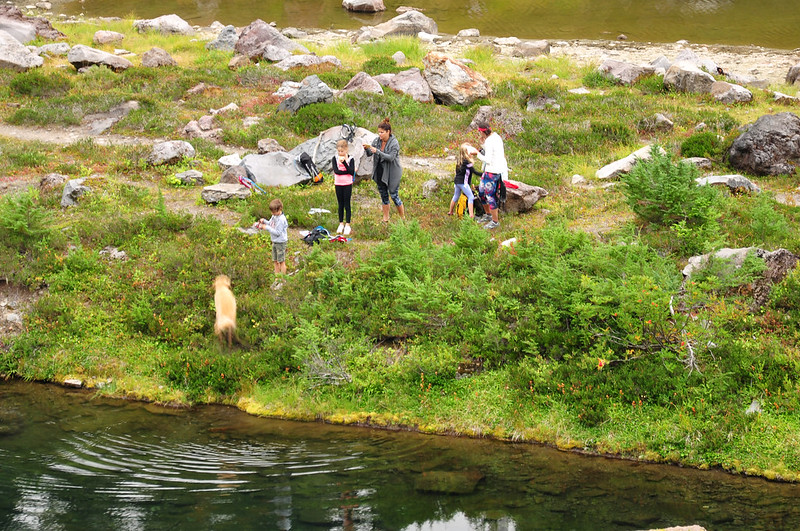 After Mazama Lake the trail climbs yet again. This hike has a lot of ups and downs! There are supposed to be views of Mt. Baker here: 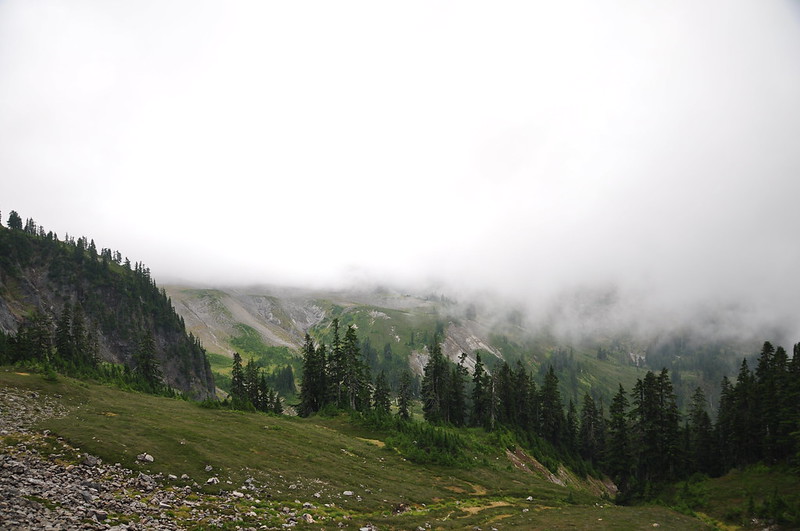 The last stretch back to the car. By the this point we were incredibly discouraged by the clouds and lack of views: 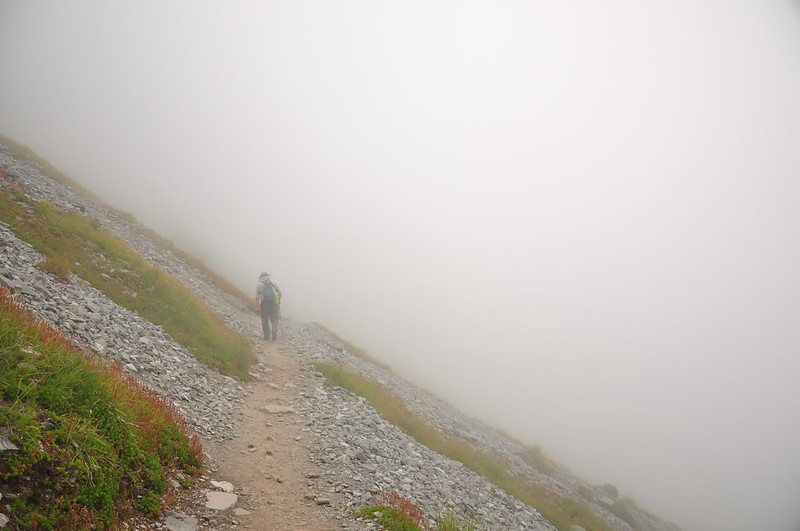 After our viewless hike we checked out the weather forecast and saw that there was a 40% chance of rain the next day. Translation: “it WILL rain, and it will be overcast and you will have no views.” The forecast for the day after that was partly sunny. Translation: “overcast.”

Now that Plan C had failed, we gave up. We packed up and started heading home, three days earlier than planned.

We got to see some beautiful scenery on this trip, but the constant uncertainty about smoke and weather was stressful. Since August hasn’t been good to us for two years now, we may take out trip in July next year.