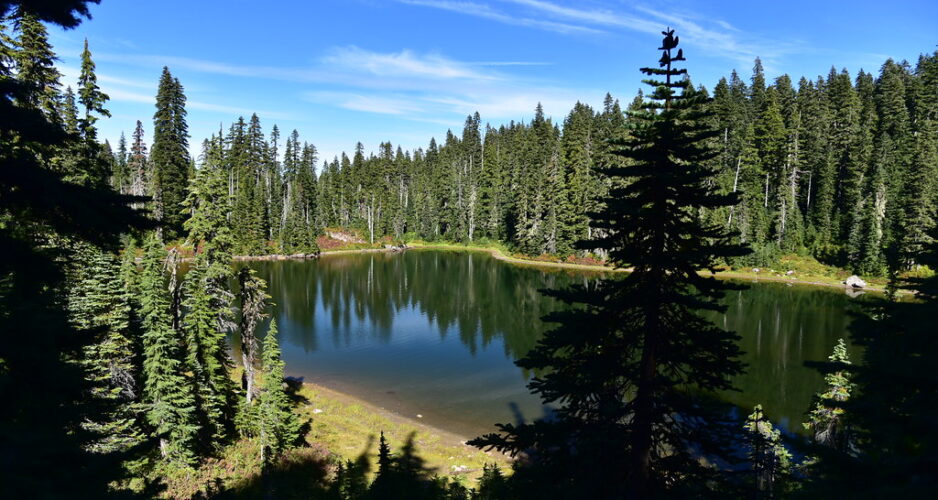 Greg and I spent the weekend in Trout Lake and did two hikes in the Indian Heaven Wilderness.

Several months ago we booked a cabin on Hipcamp. It’s on someone’s property outside of Trout Lake. It’s rustic with no electricity or plumbing; it’s basically like camping with four walls and a roof. But it suited our purposes: 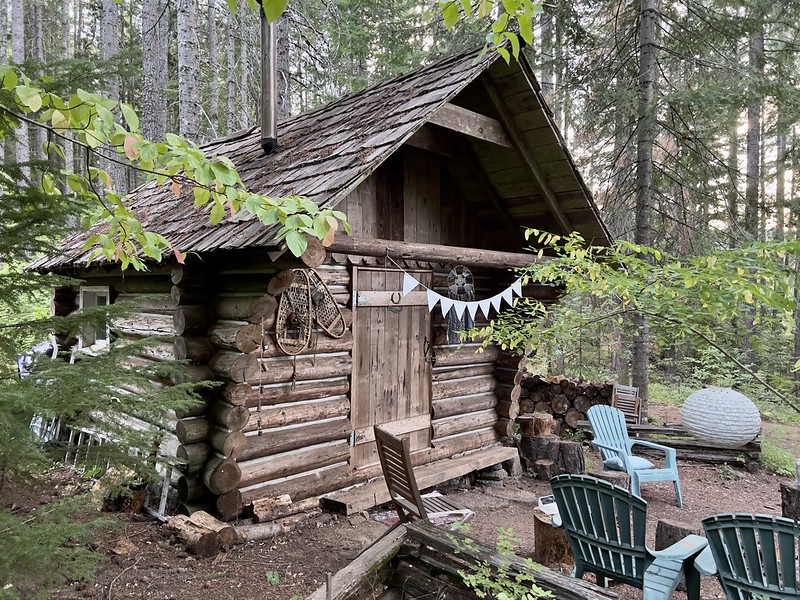 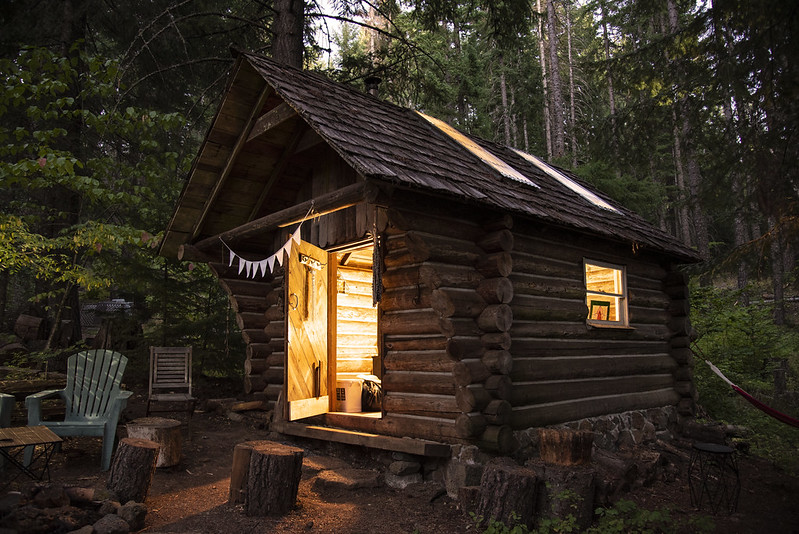 We drove out on Friday and arrived at dusk. We made dinner and went to bed. Saturday morning we drove to the Cultus Creek Campground to start our loop hike. There were very few campers but tons of hikers, with cars crammed into every nook and cranny. Fortunately nearly everyone was headed up the Indian Heaven Trail towards Deep and Cultus Lakes. We would pass those later, but we started off by heading up the Cultus Creek Trail (which isn’t actually along Cultus Creek, go figure): 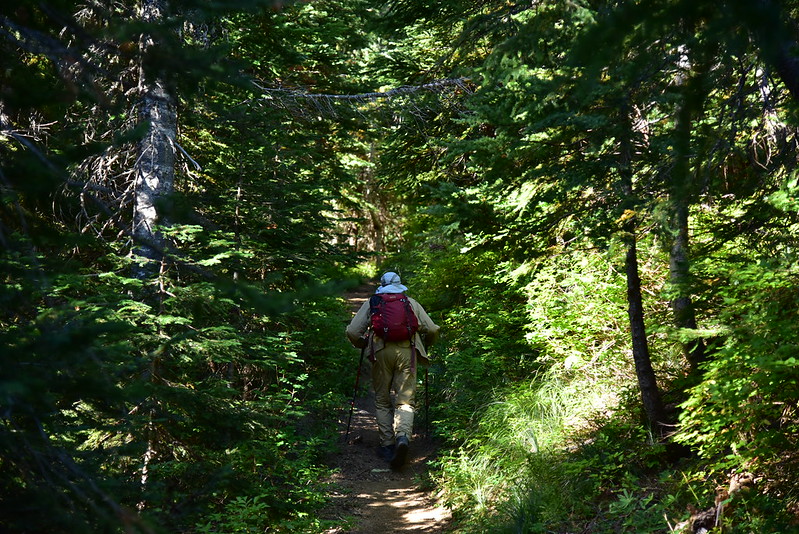 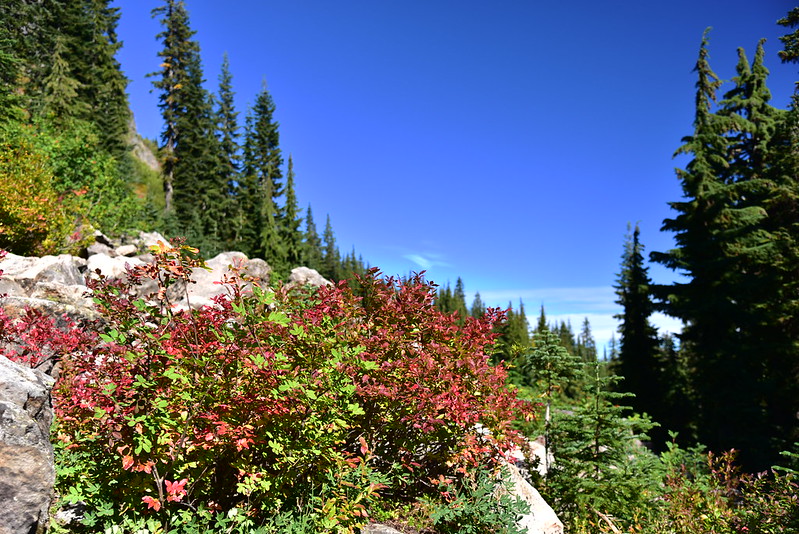 A glimpse of Mt. Adams on the way up: 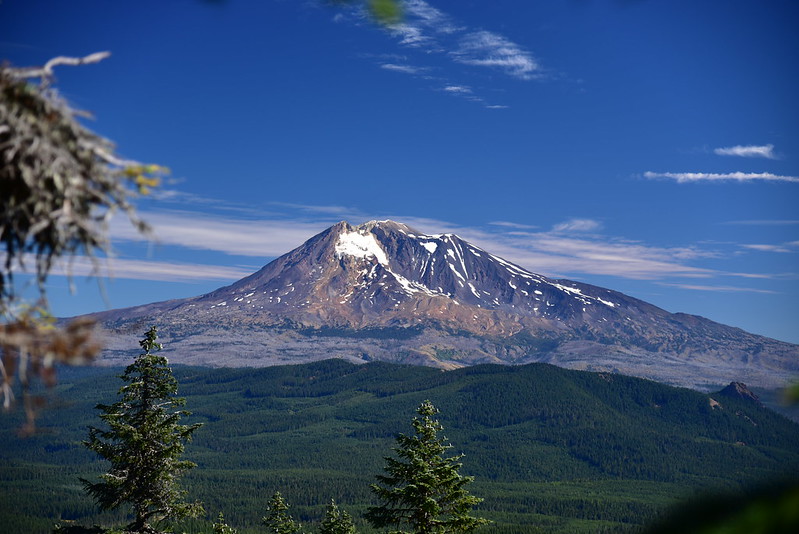 After 1.5 miles we reached the junction with the PCT and turned left: 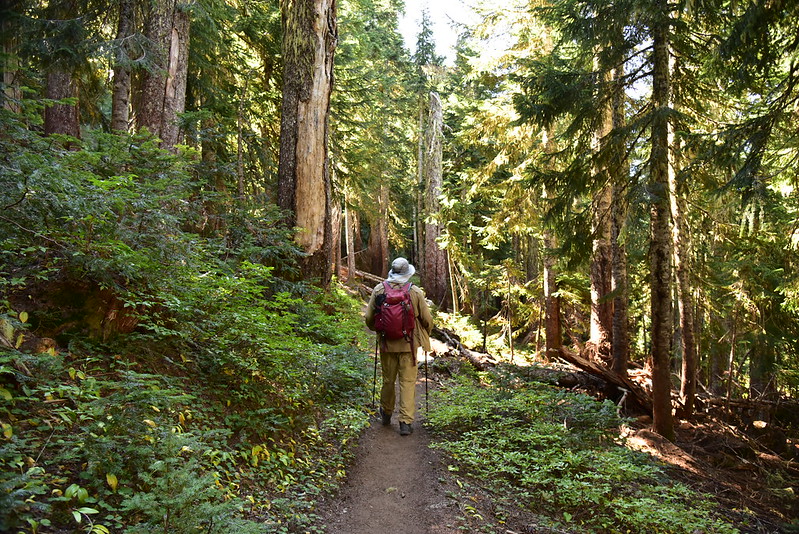 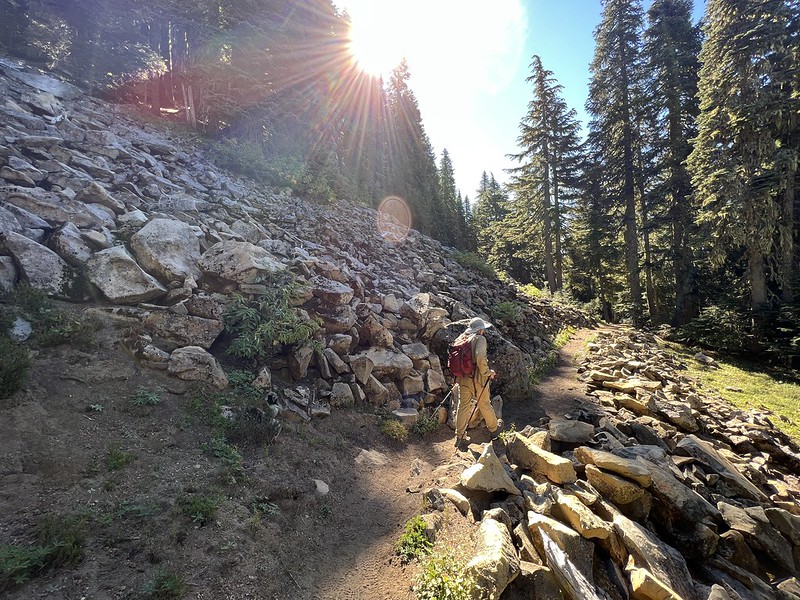 At the 3.5 mile mark we reached the junction with the Indian Heaven Trail and turned left. We soon reached Clear Lake where we took a break: 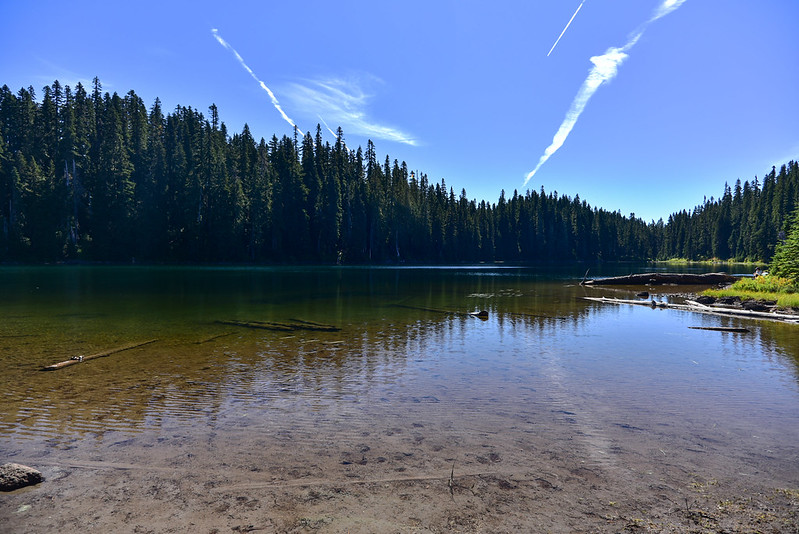 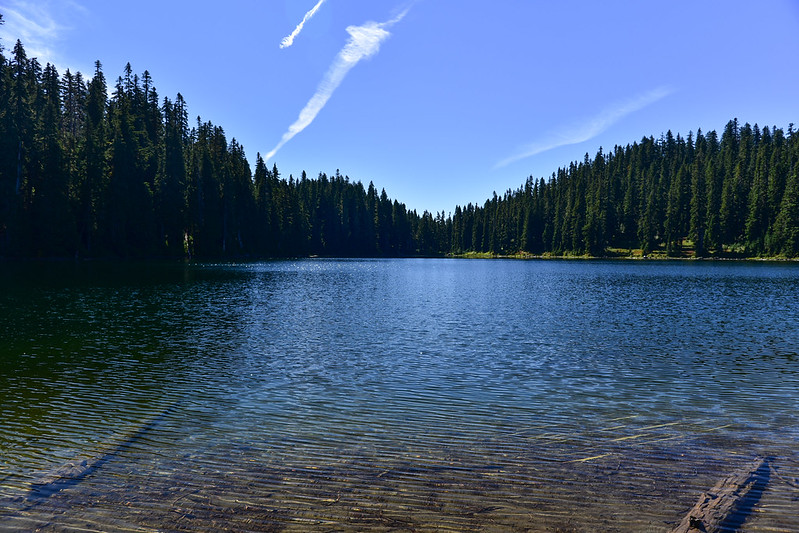 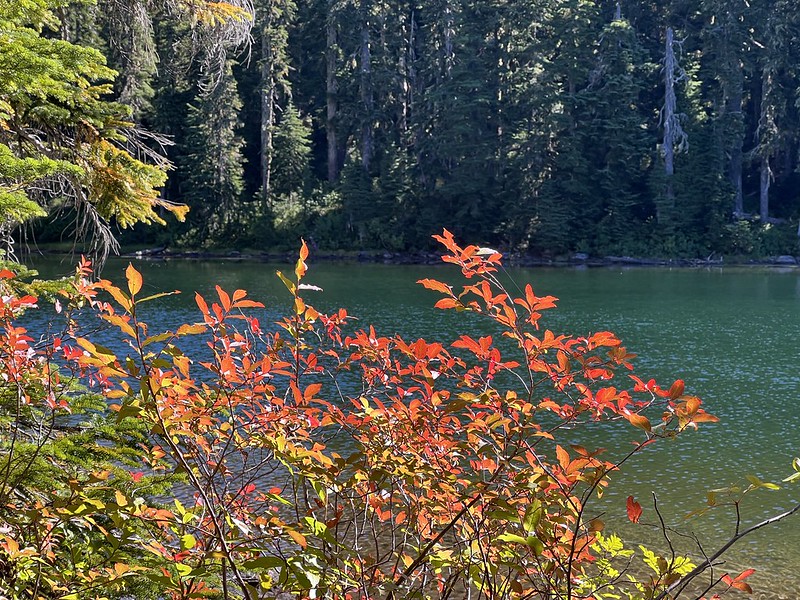 The last time we were here we were hustling out of the wilderness because of a wildfire during Labor Day Weekend 2017. That was a very stressful day. Today was much more relaxing: 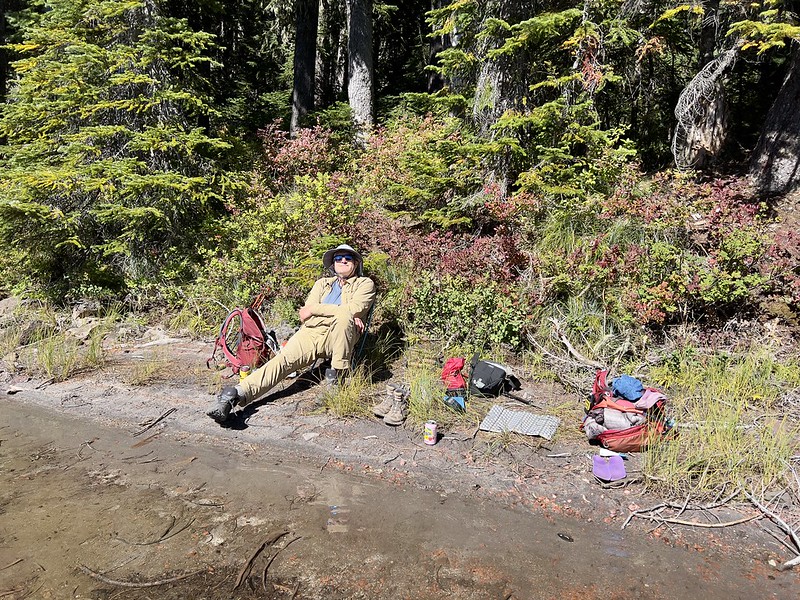 It was pleasant here and we actually got kind of hot sitting out in the sunshine. It was extremely warm for late September. Some jerk started flying his drone over the lake, even though drones aren’t allowed in wilderness areas. A much nicer flying object was this fuzzy bee who landed on my pack: 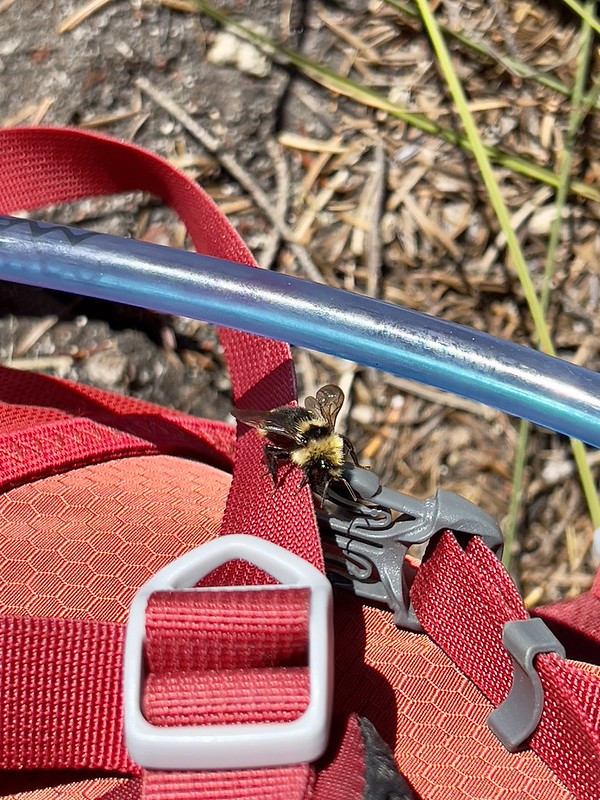 After our break we continued on. Soon we reached Cultus Lake: 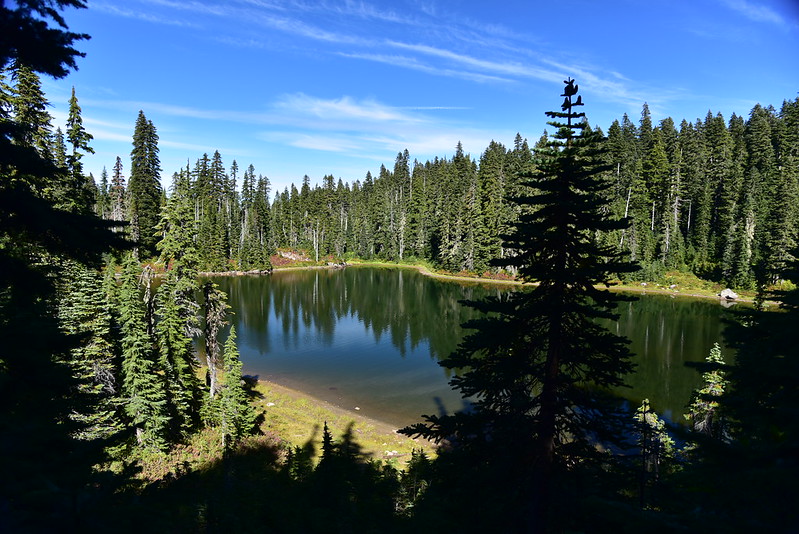 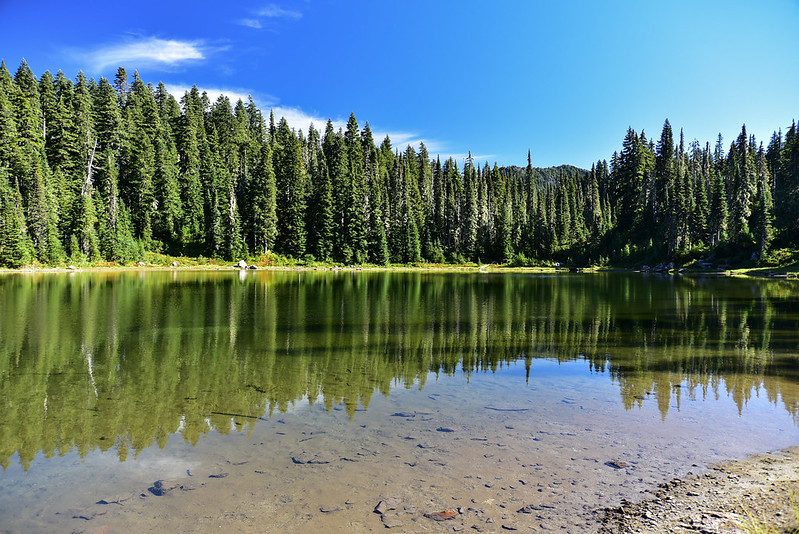 There’s a side trail that heads to Deep Lake so we headed over there: 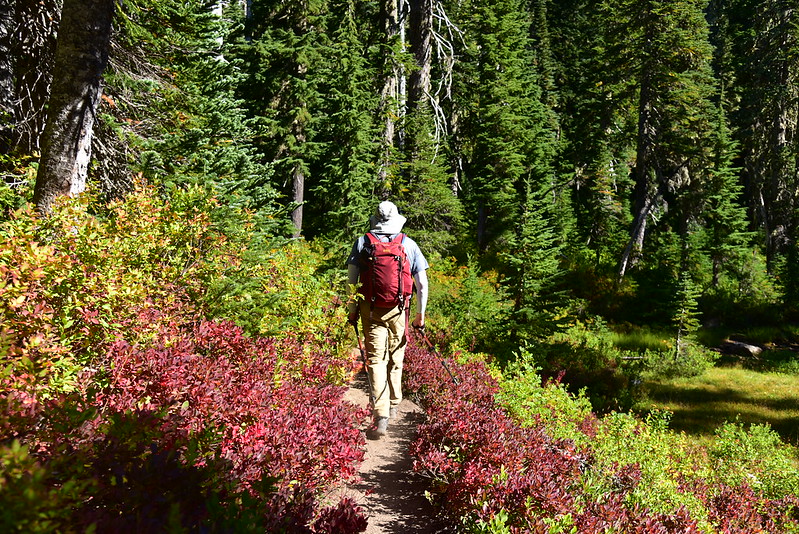 You can see the very top of Mt. Adams: 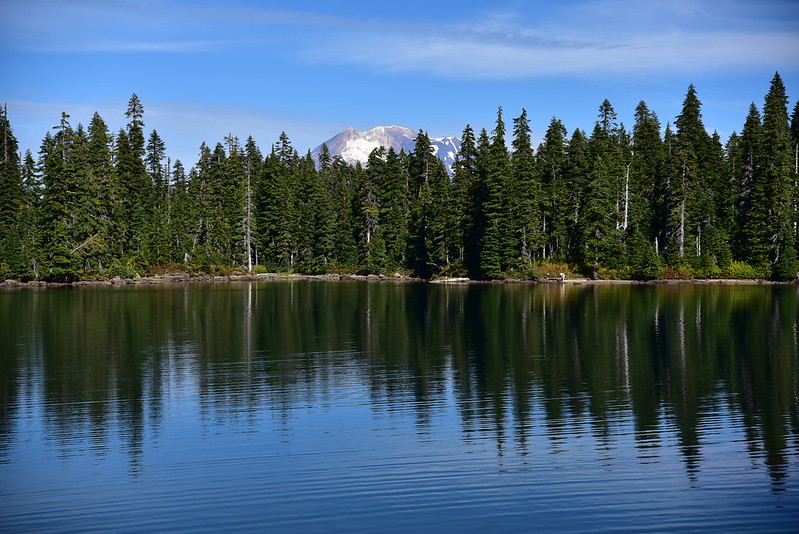 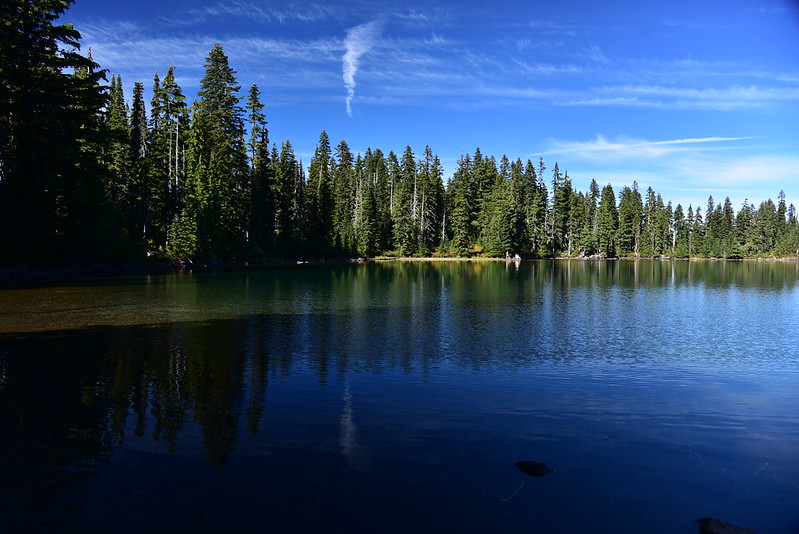 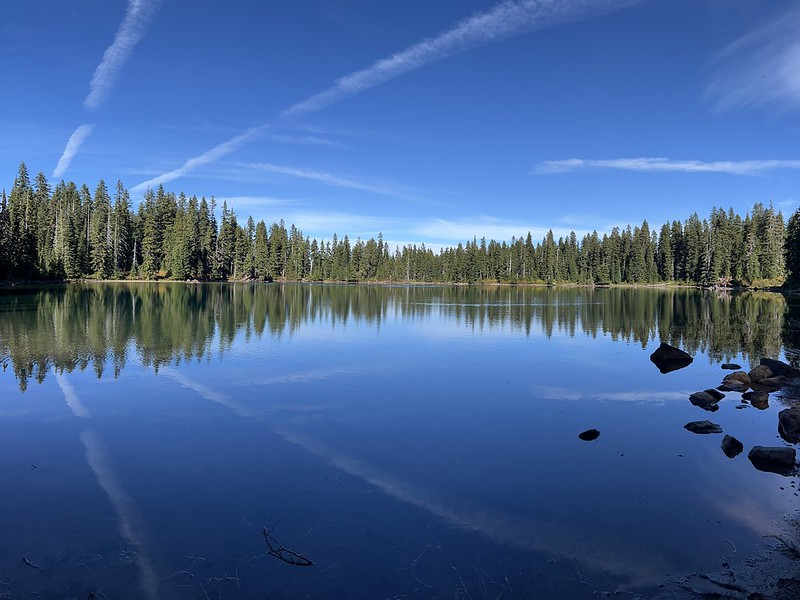 After a short break at Deep Lake we headed back to the main trail: 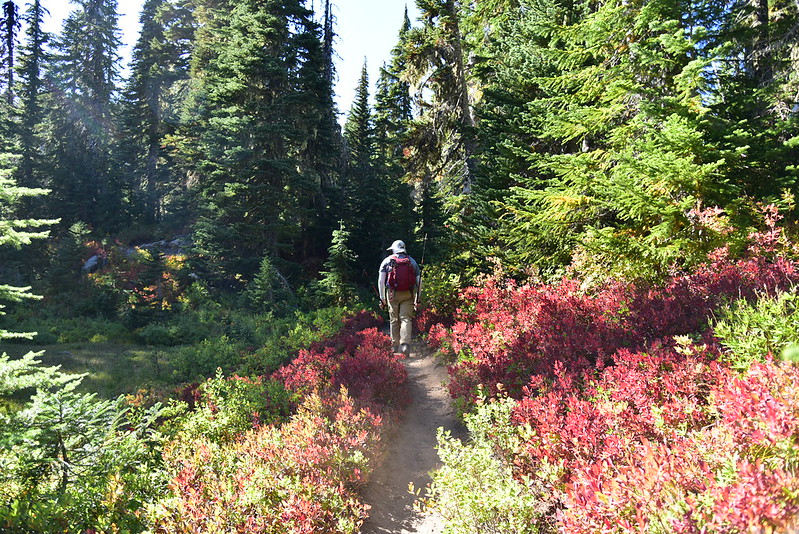 Then we began the descent down to the trailhead: 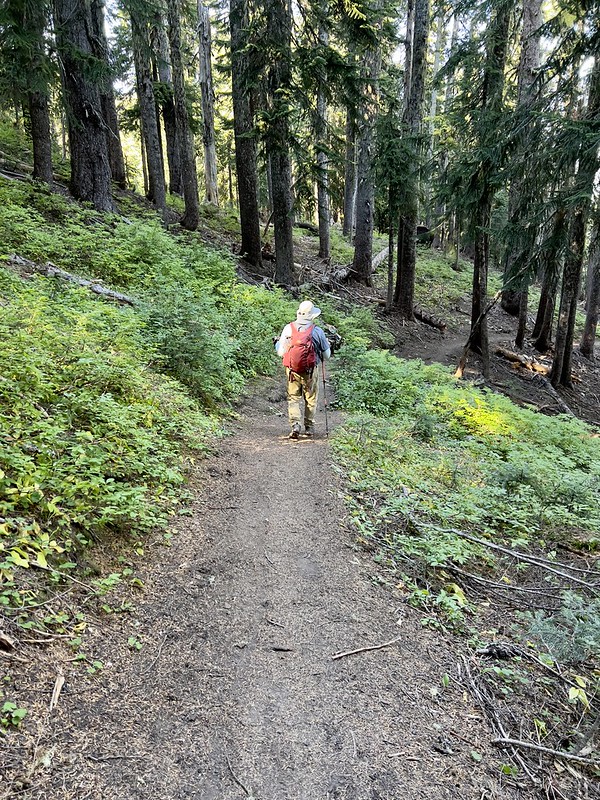 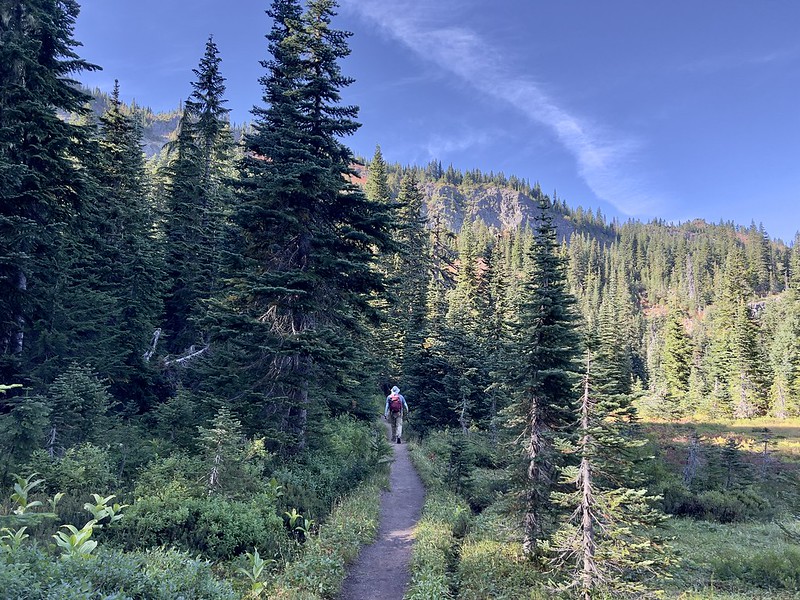 There’s a nice spot with a view including Mt. Adams: 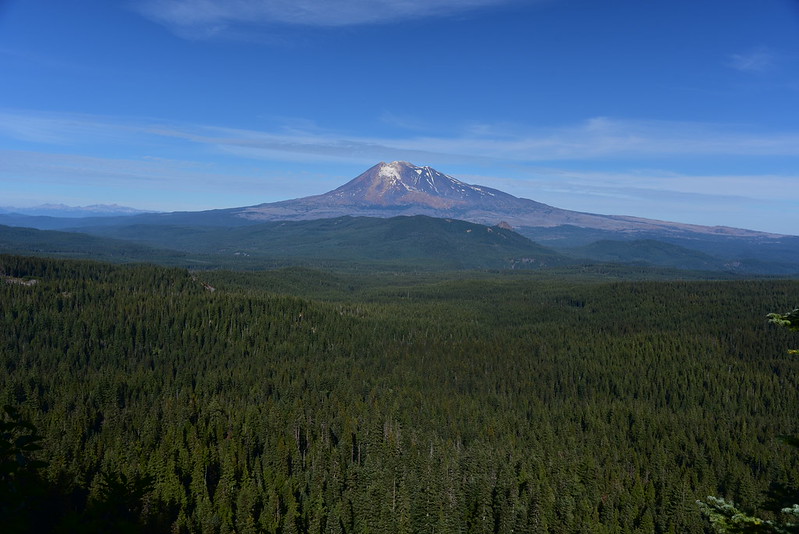 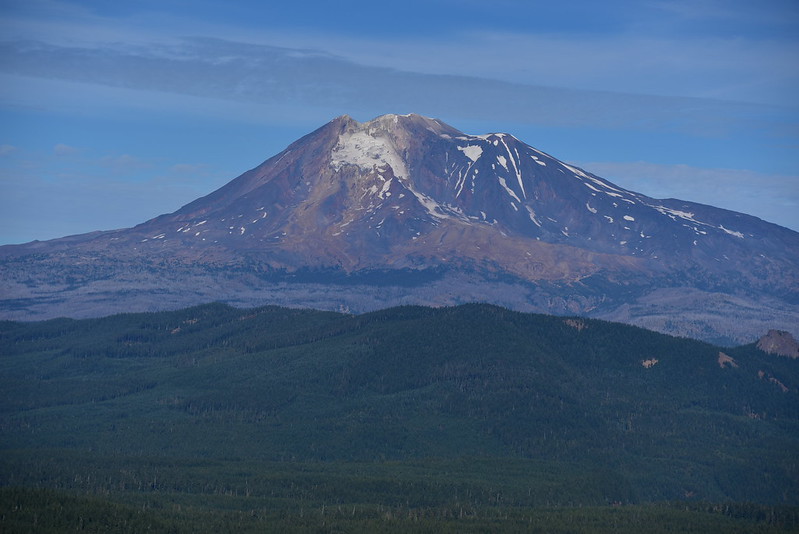 Steamboat Mountain and the Goat Rocks: 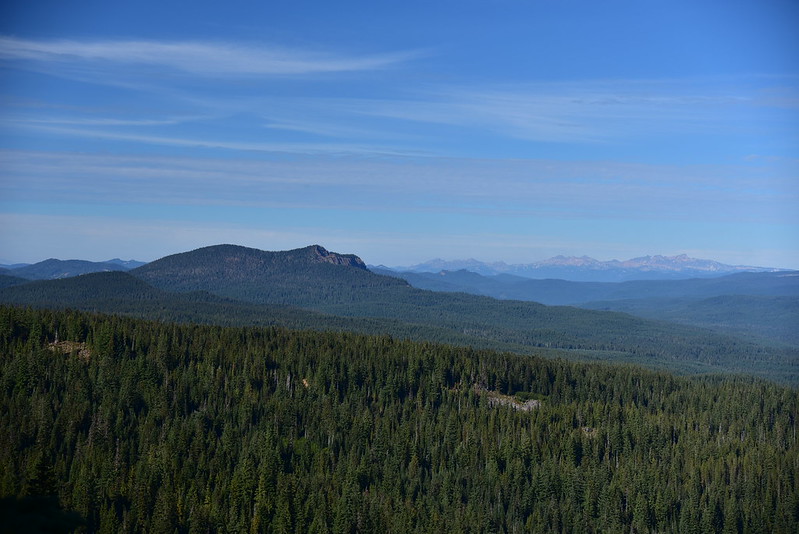 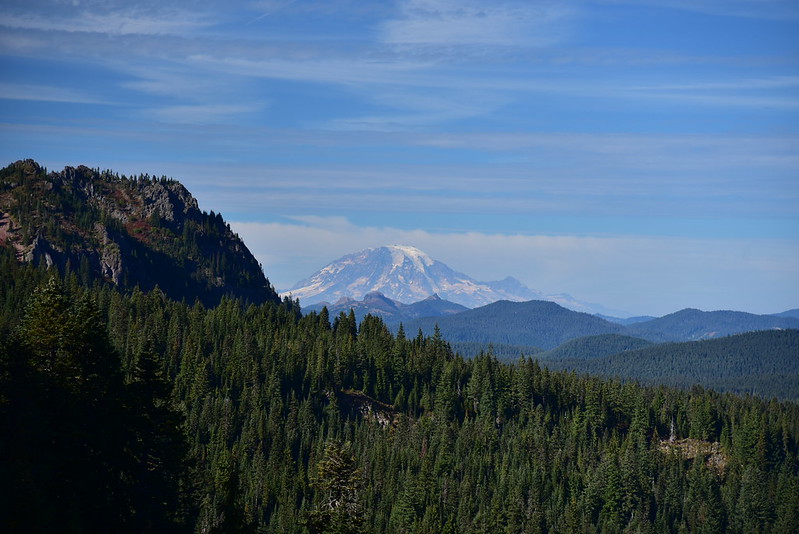 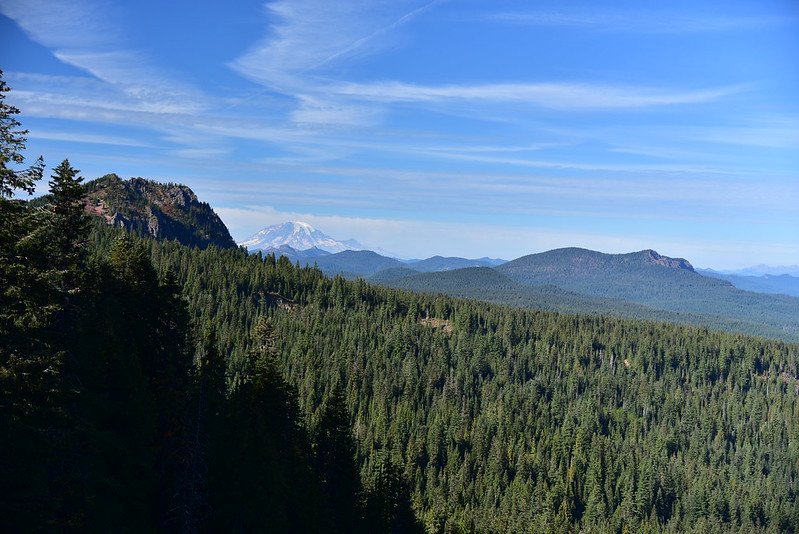 The PCT was well-maintained, of course, but there were several downed trees on the Indian Heaven Trail: 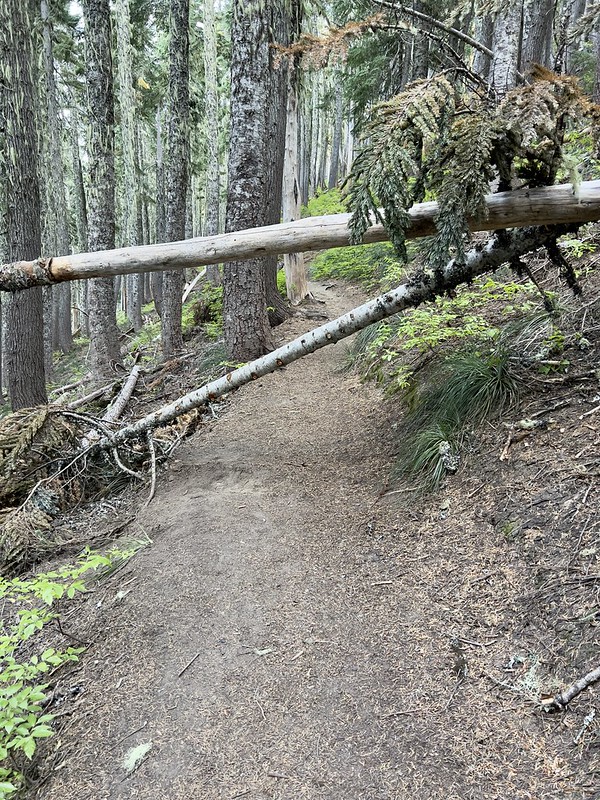 Many of the cars were gone when we reached the parking lot at 4:20. We saw dozens of hikers and backpackers today, everyone out enjoying what might be the last summer-like weekend in awhile. We were about 1-2 weeks early for nice fall color, although we did see the start of some.