I have a very strange work schedule, so I occasionally have weekdays off, which was the case this past Thursday. So I headed down to the Mt. Jefferson area to go for a hike. I originally intended to go up to Pamelia Lake, having never been there, but when I stopped in at the Detroit Ranger Station for the required permit, I was told the trail was closed for a few days. Apparently they were doing some blasting where the PCT crosses Milk Creek, to try and make the crossing better after it was ripped to shreds in the November storms. So I decided to do Marion Lake instead.

I was surprised to see half a dozen cars at the trailhead. On a weekday towards the end of the September, I thought I’d be the only one up there. I never saw the occupants of most of those cars, though I did pass a group of four men who were taking a break at Lake Ann, who had started on the trail about ten minutes before me. I didn’t see them again the rest of the day.

When the trail forks after Lake Ann, I took the right fork and then tried to find Marion Falls, without success. So I continued on to Marion Lake, where I ate lunch along the shore. 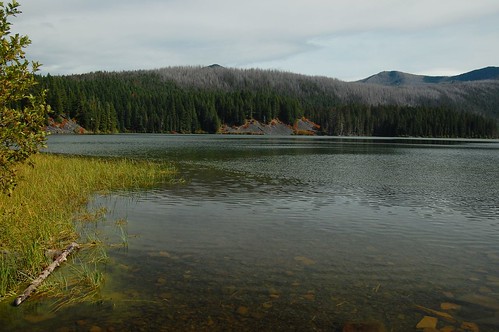 There was a little fall chill in the air, and the day was a little overcast. The weird thing is that you can tell this lake is popular and overrun with people in the summer because of all the little trails down to the shore and the huge trampled camping areas. But there were no campers there that day, and no other hikers. It was a little like being in a ghost town.

While eating lunch, I could see the huge rock slide to my right, across which the Blue Lake Trail crosses. There were a lot of colorful vine maple there, so I headed up that trail just as far as the rock slide so I could revel in the gorgeous beauty of all that fiery red color. It was fantastic! I absolutely love vine maple in the fall! 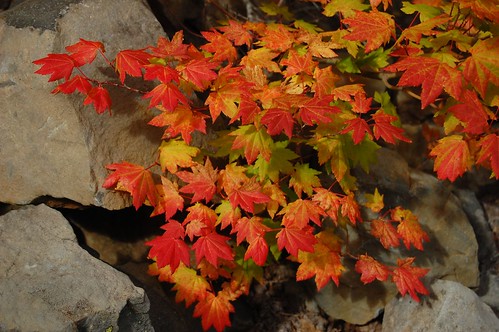 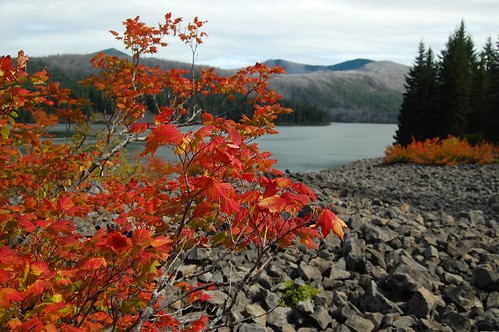 There are a lot of patches in the forest where vine maple grows here, but only the exposed ones on the rock slides are in color right now. There are several rock slide areas that the trail passes, or that you can see from a distance, and ALL rock slide vine maple is in color now. It’s pretty spectacular.

Back down on the Marion Lake trail, I meandered down to the peninsula, where I had a pretty nice view of Three Fingered Jack, silhouetted in the afternoon sun. 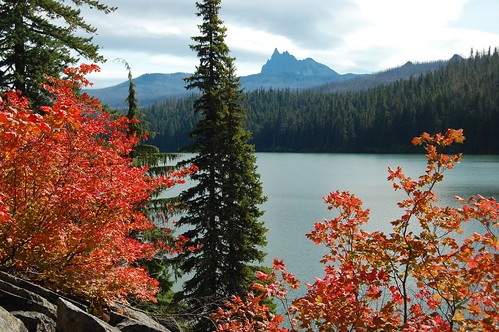 And if you cross the peninsula to the other side, you can see the very top of Mt. Jefferson. 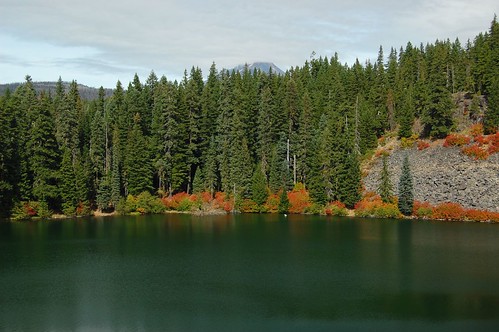 From here, I could also see two horseback riders crossing a rock slide on the Minto Pass Trail, right before it connects up with the Marion Lake Trail. I came across the hoofprints on the trail a short while later, but never did see them up-close. 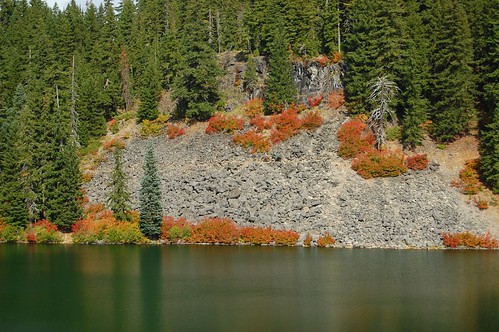 See all my photos from this hike here.

This is a pleasant and easy hike. I am by no means a fast hiker, but it only took me four hours to do the six miles, including my detour to find the waterfall, my lunch break, and my half hour vine maple fix. Makes for a great autumn hike!