This morning we packed up, checked out of our cabin, and headed over to Collier Memorial State Park to check out the outdoor logging museum there. Some background from Oregon State Parks:

The logging museum began in 1947 when the Collier brothers donated a collection of antique logging equipment. Their intent was to show the evolution of logging equipment from the use of oxen and axes to trucks and chain saws. Also spotlighted is the role the railroad played in the timber industry. The museum is recognized as having one of the largest collections in the country. The outdoor exhibits are open year-round, daylight to dusk.

On this chilly Monday morning there was hardly anyone around and we pretty much had the place to ourselves as we explored the outdoor exhibits. 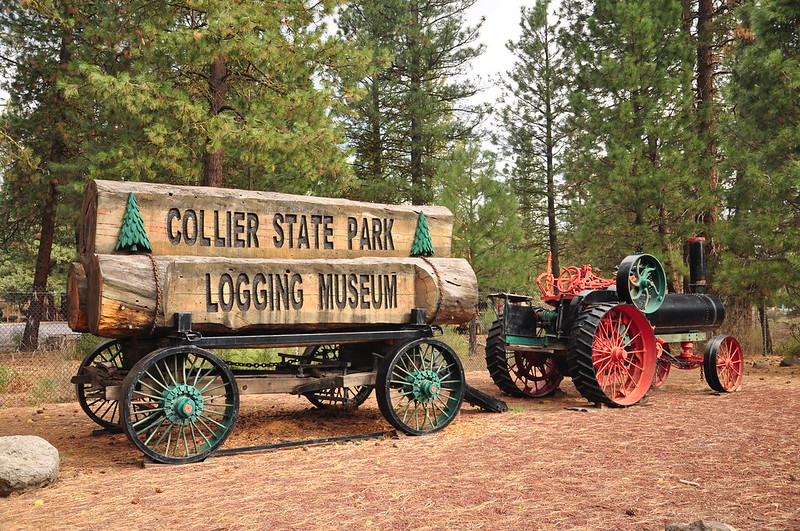 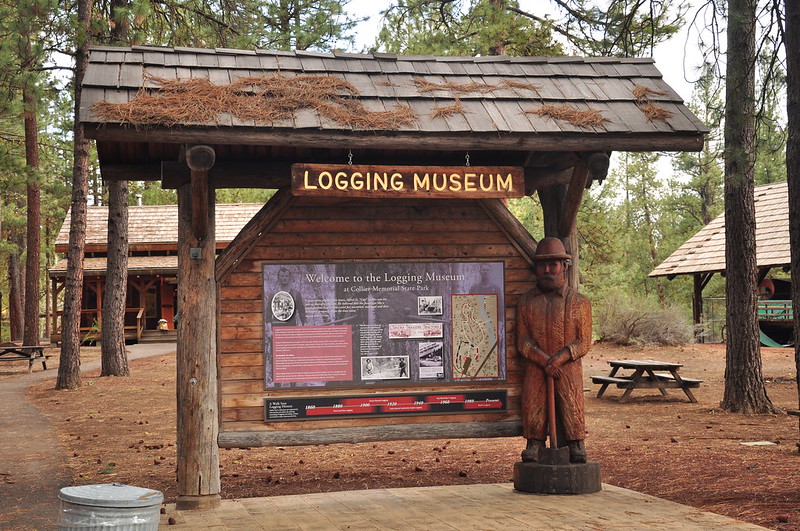 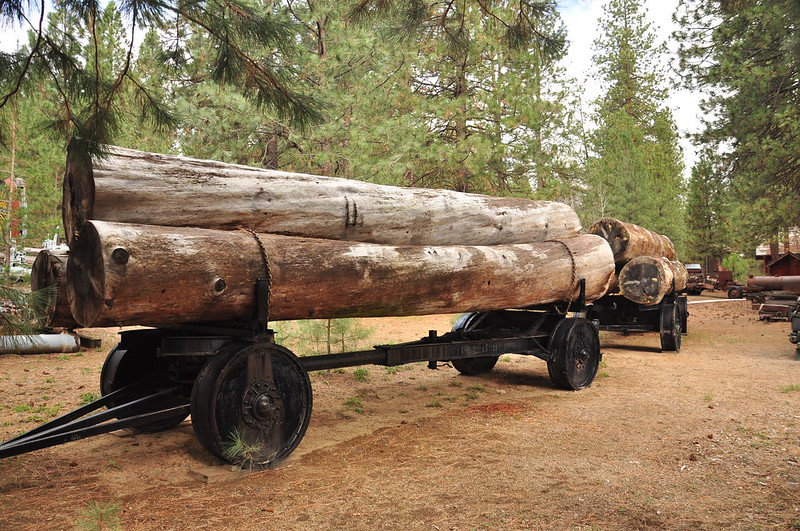 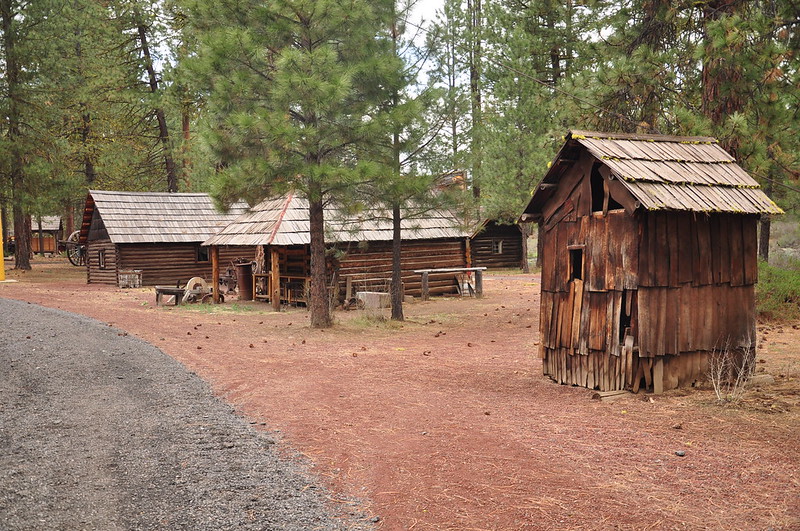 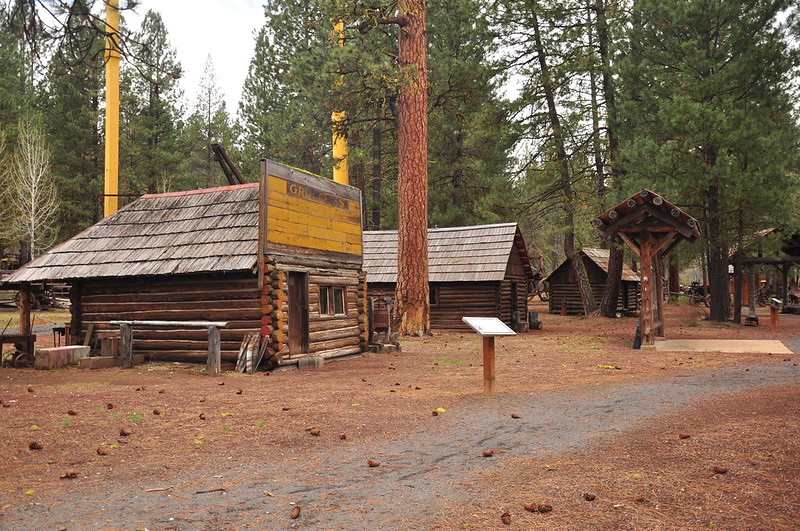 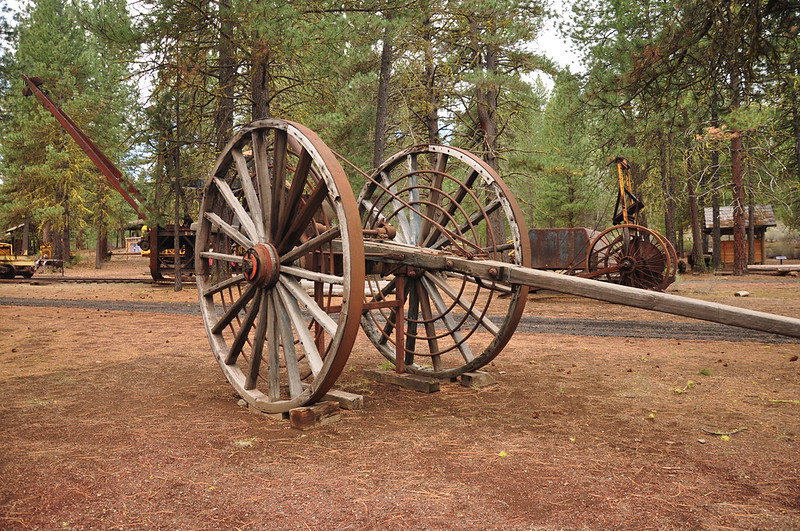 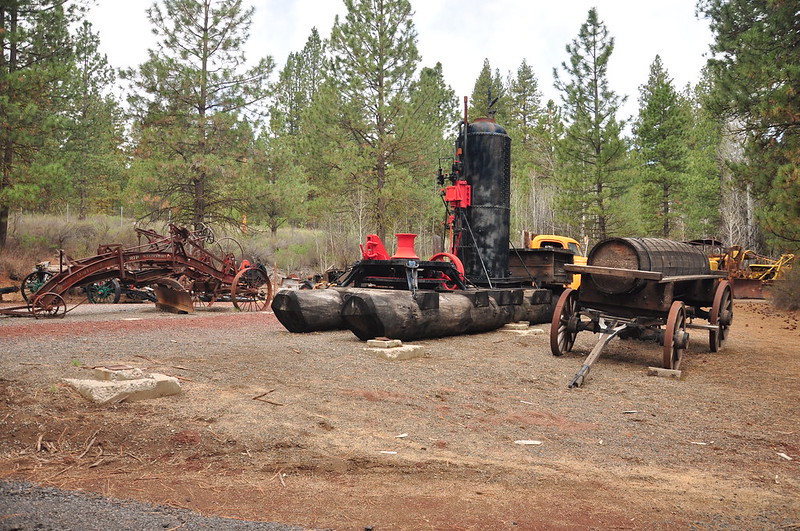 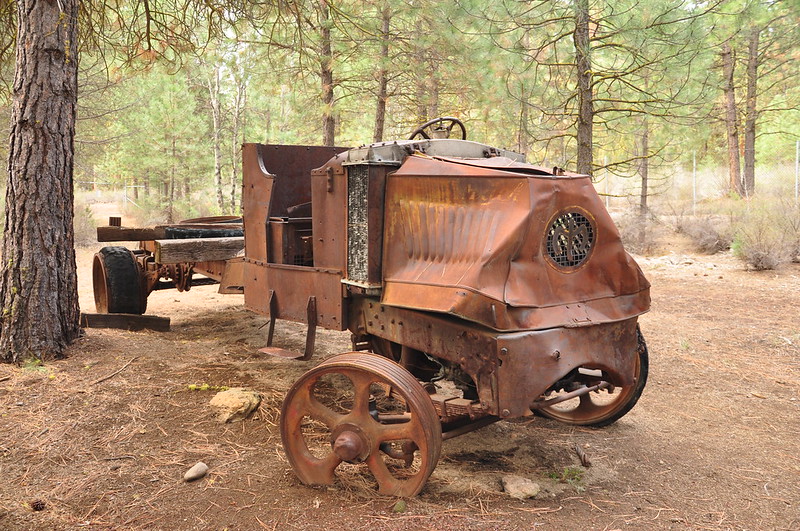 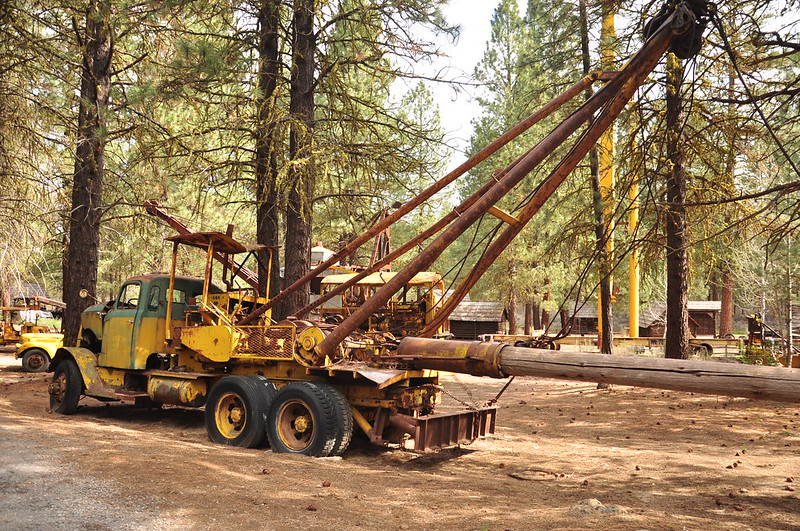 Can you see the goose on top? 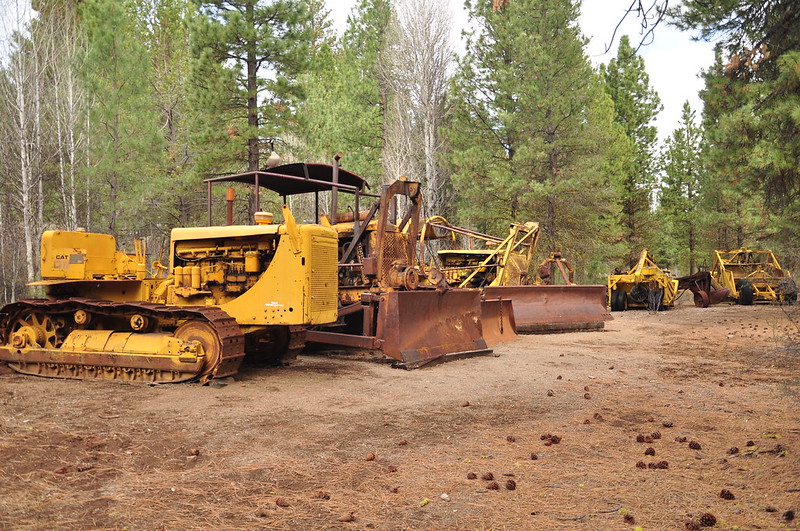 This is a cross-section of the Clatsop Fir. This 700-year-old tree was located on Crown Zellerbach land outside Seaside, Oregon. When it was toppled by the 1962 Columbus Day Storm, it was 200 feet tall and the diameter at the base was more than 15 feet! This cross section came from a part of the tree 38 feet above the ground. 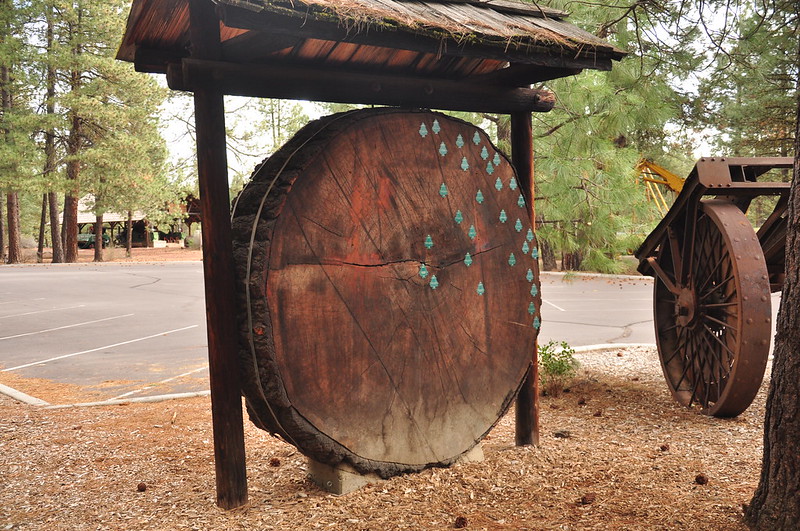 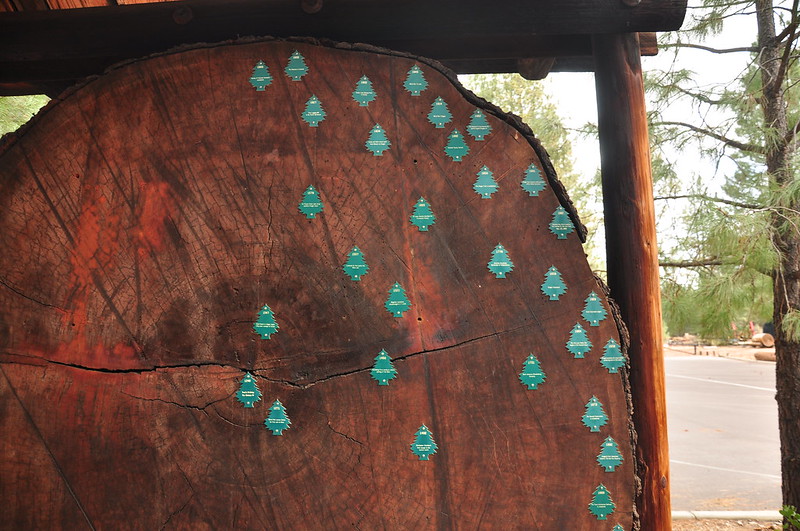 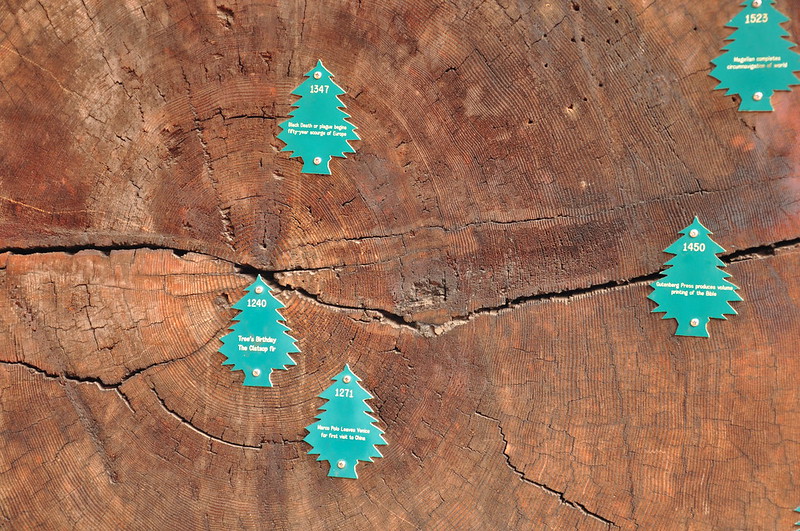 The very lovely Spring Creek flows through the park: 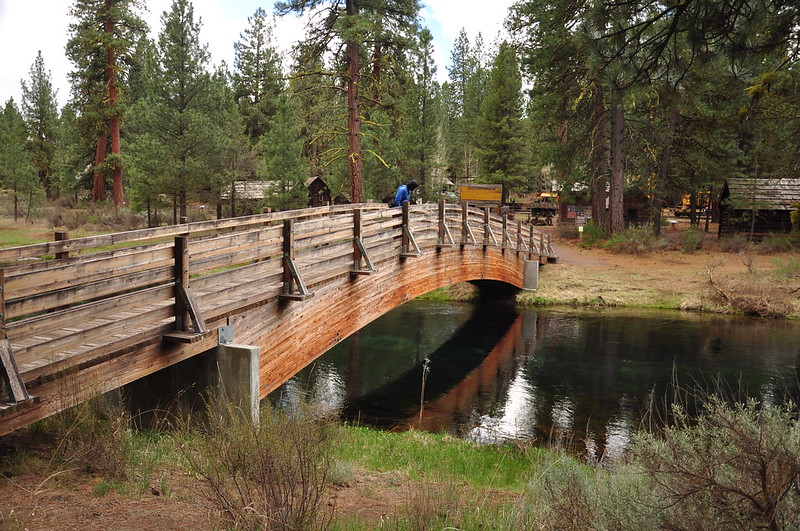 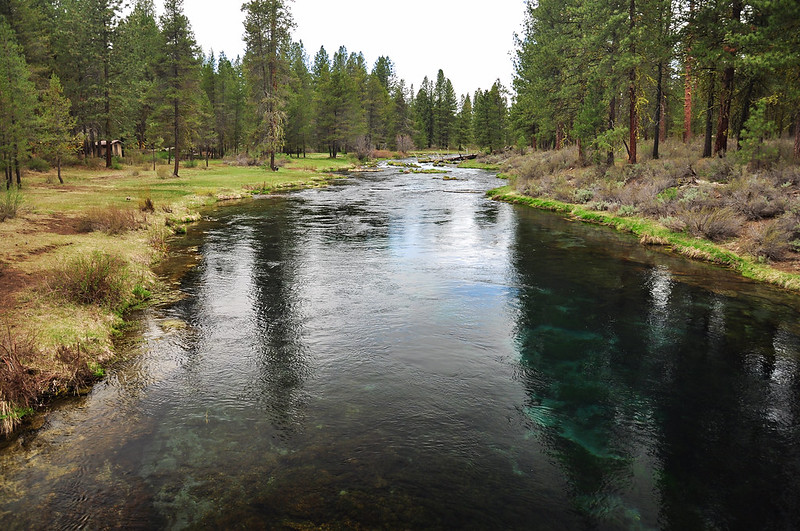 The gift shop wasn’t scheduled to open for the season until May 1 (the next day) but the lady who was getting things set up let us look around: 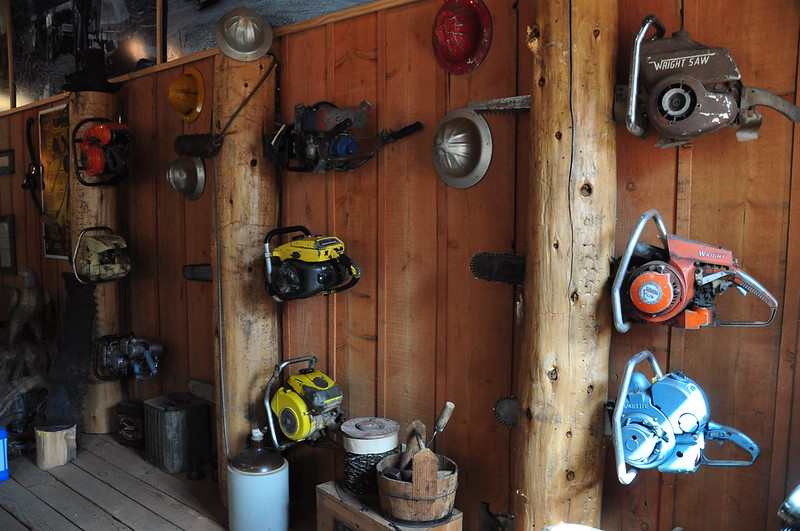 After we left Collier we started heading east on Silver Lake Road. At one point Deb looked in the rearview mirror, and lo and behold we could see mountains! We hadn’t seen any on this trip so far with the bad weather, so we immediately pulled over. The mountain at right is Mt Scott, which towers over Crater Lake: 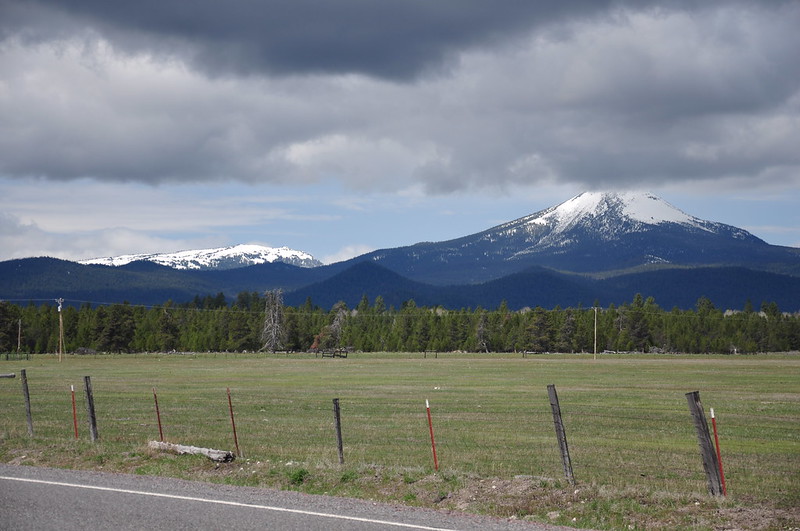 The mountain at left is Mt. Thielsen: 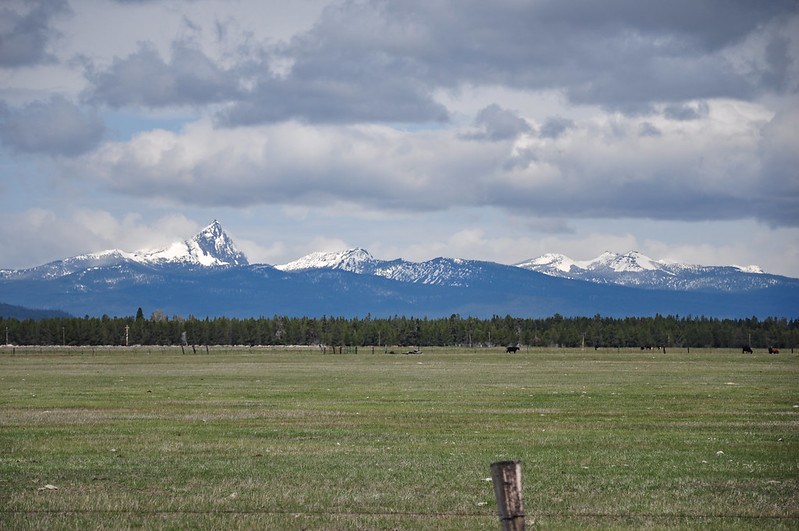 We drove on, crossing the Klamath Marsh National Wildlife Refuge. This refuge doesn’t have any trails so we headed for Road 690 along the eastern shore of Wocus Bay to see what we could see. A very old sign and map at the junction of Silver Lake and Road 690 indicated a picnic area down 690 so we aimed for that. That raod was rough. High clearance is definitely recommended. We reached the picnic area after about 4.5 miles. There’s not much there. Just a parking area and one picnic table. No signage. 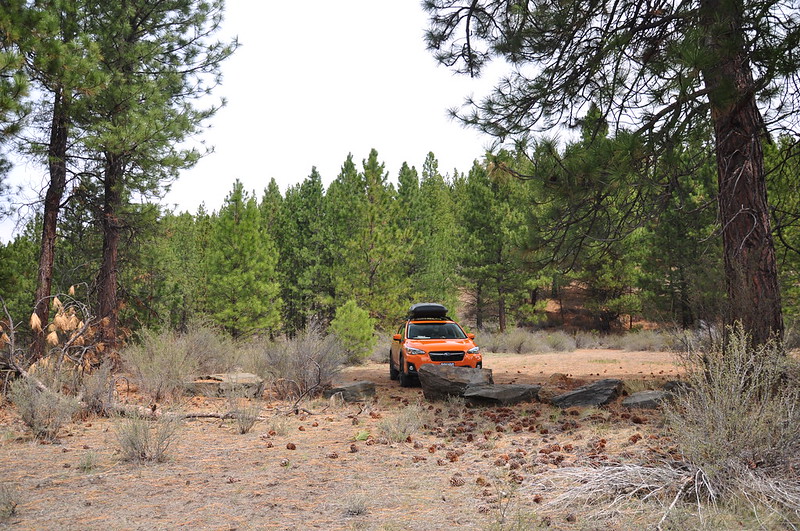 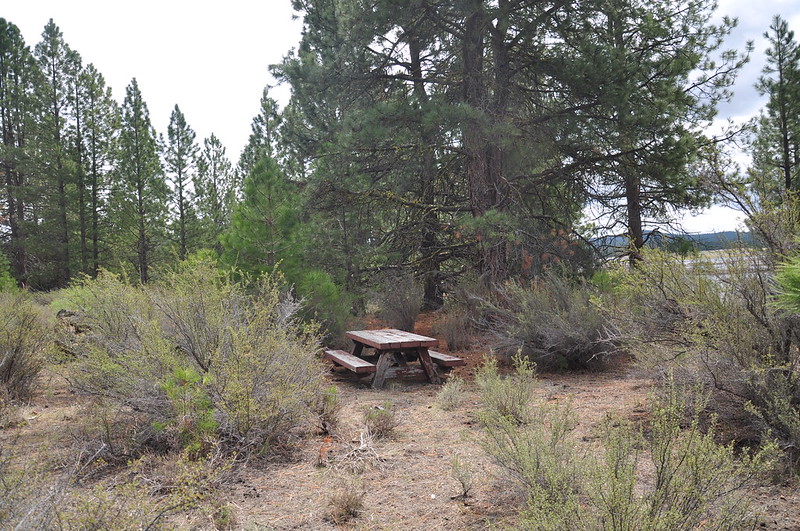 There was nothing to see from the picnic area except trees: 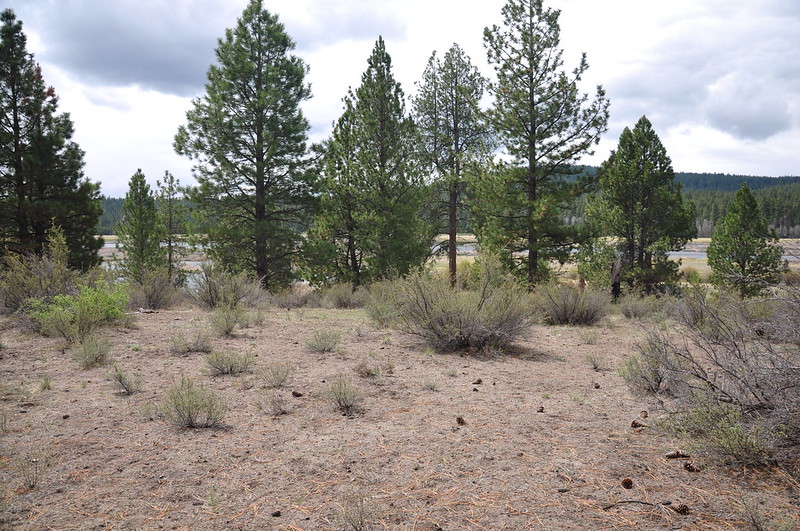 So we went down the hill where we had better views: 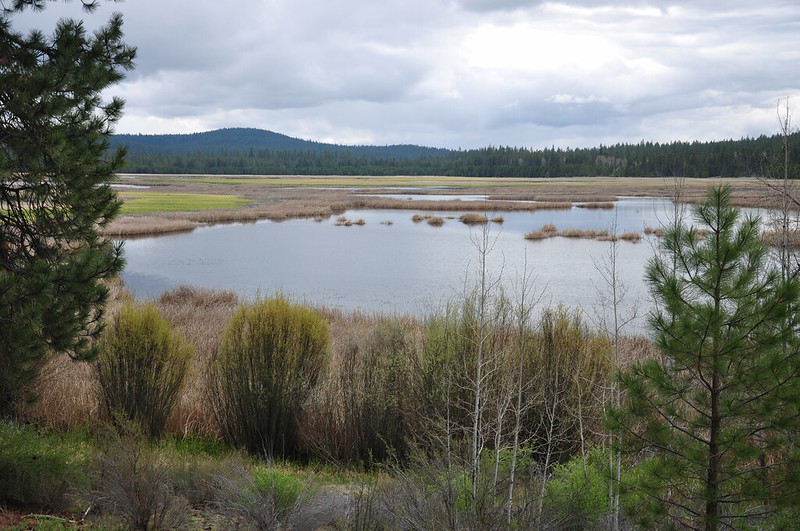 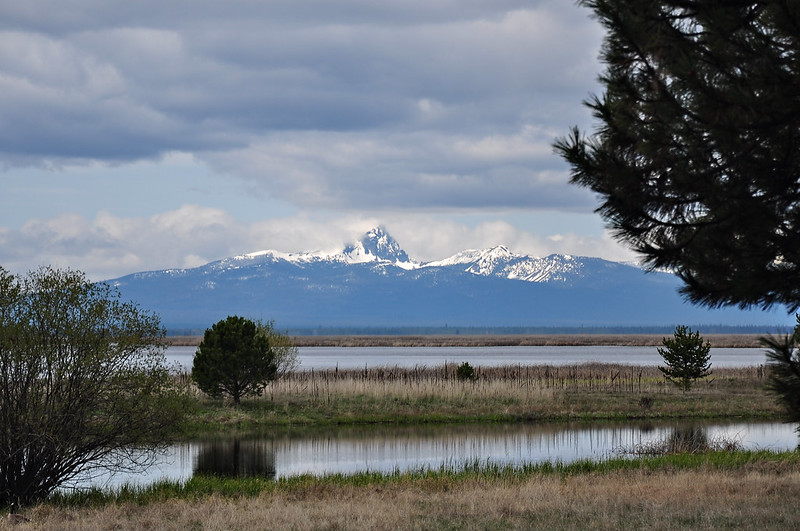 We hung out there for awhile and Deb spotted quite a few birds. After that we continue south on the bumpy road to pick up Road 43 and loop back to the highway.

Earlier while driving the main highway we had spotted an injured turkey vulture a few feet off the road, so we went back to see if it was still there. It was. Deb called the refuge headquarters but even though it was just mid-afternoon no one answered. So then she searched for any nearby wildlife rescue organizations (thank goodness we had a signal). She found the Badger Run Wildlife Rehab based out of Klamath Falls and called them. It turns out that they knew about this bird and had previously been out here looking for it, but couldn’t locate it. Deb was prepared to give them GPS coordinates, but they asked if we felt comfortable catching the bird ourselves. We decided to give it a try and see if we could.

Of course the vulture tried to get away when we approached it. It’s wing was injured so it couldn’t fly, but it kind of flapped and ran away from us and hid in some thick brush. You can see it in the video. To get to the bird, Deb waded into the water and managed to extract him from the brush, wrapping him in a blanket she’d had in the car. 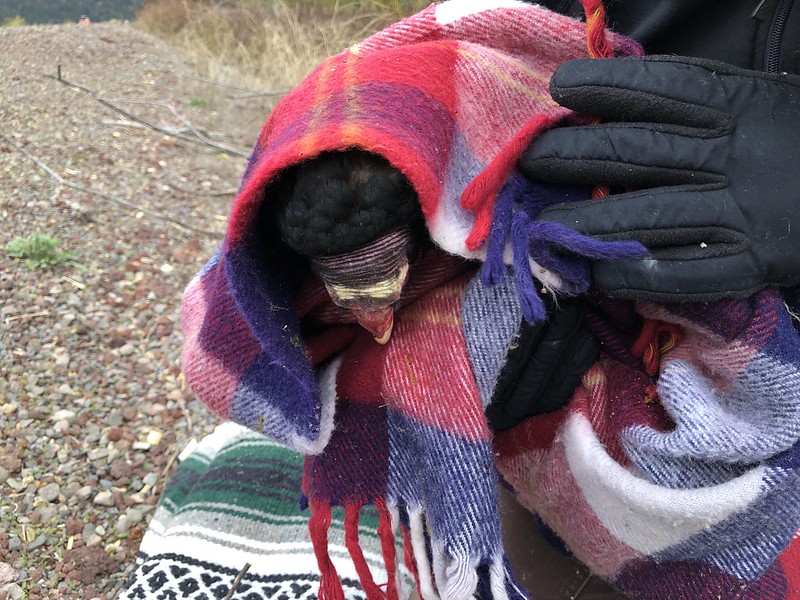 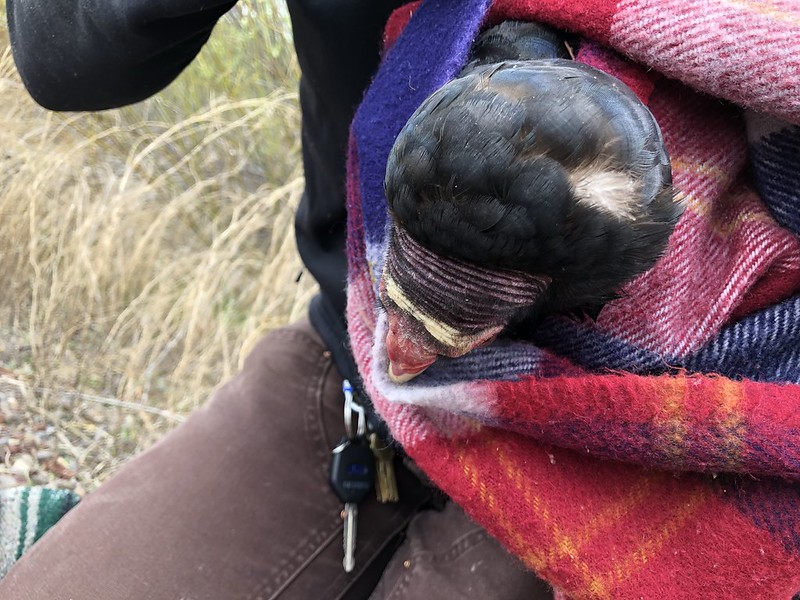 We called Badger Run back and said we had the bird. Then we coordinated with a volunteer who agreed to meet us halfway to pick up the vulture. So we backtracked 30 minutes to Chiloquin to meet her there. We handed off the bird and turned back around to head towards Summer Lake. (The volunteer later called and left a message. Sadly the bird’s wing was too injured to fix and they had to euthanize him.)

The weather was really not cooperating and the temperatures were forecast to get quite cold at night. It wasn’t good camping weather, so we paid for a room at The Lodge at Summer Lake. 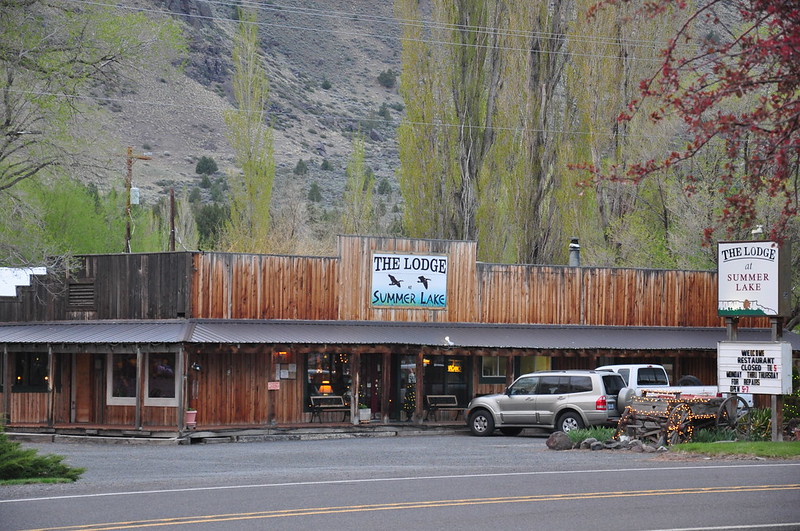 Since our room didn’t have a kitchenette we made dinner on a picnic table outside: 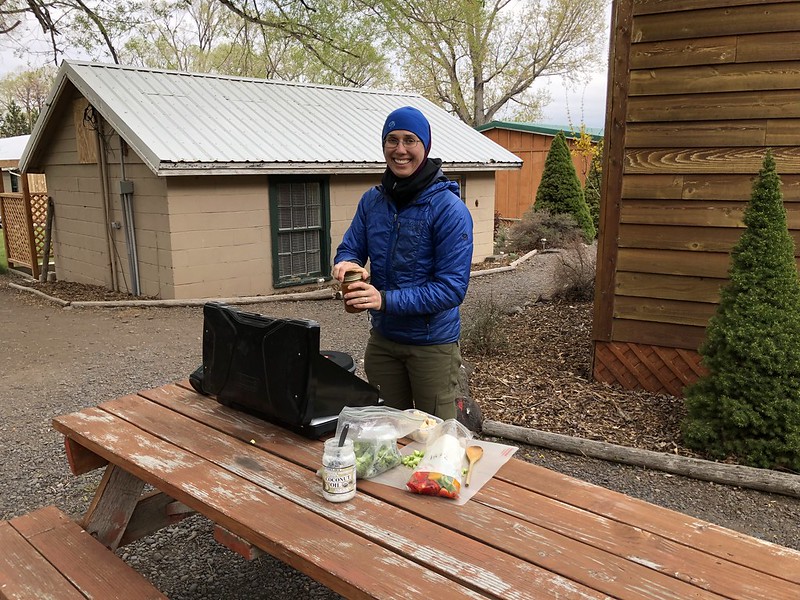 From the lodge we could see Winter Ridge stretching away to the south: 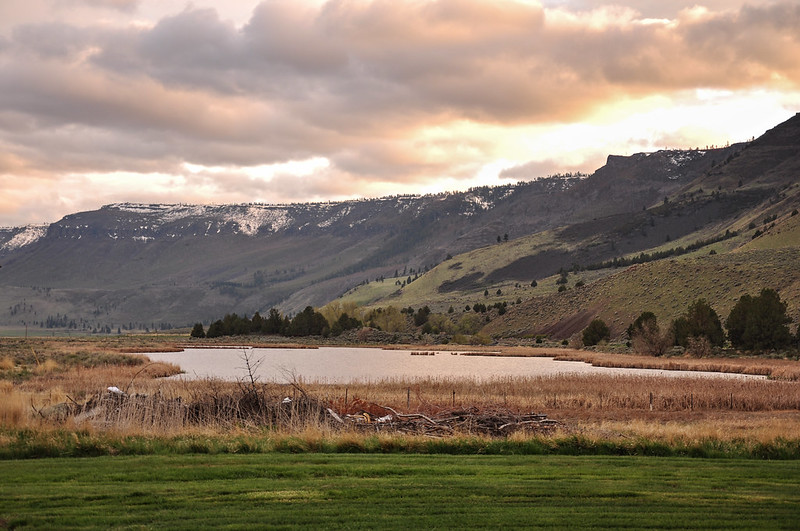 I walked across the road to the refuge headquarters and could see Diablo Rim to the east: 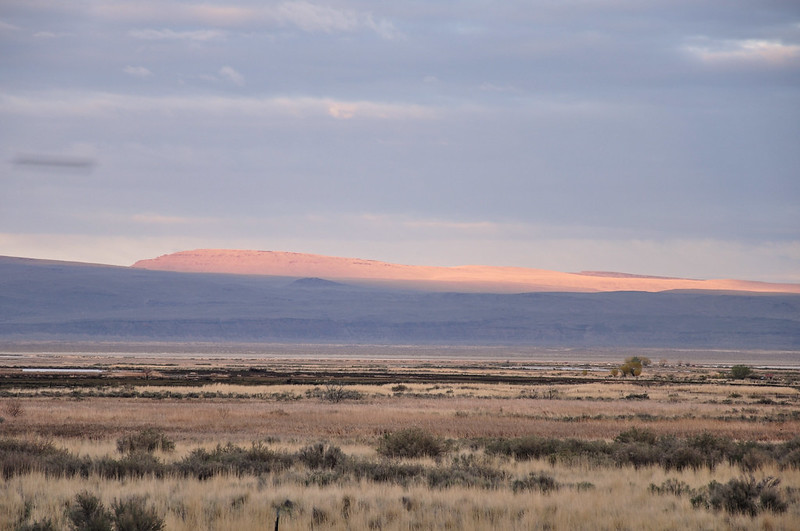