Greg and I spent the third weekend of August in Detroit waiting for the solar eclipse. It was too smoky to hike on Sunday the 20th, so we crossed the Detroit Dam and geocached our way up Kinney Creek Road. The final cache of the day was at a feature called Slate Rock, and hey, it happens to be a former lookout site! We had done zero research on this ahead of time; I had just dumped all the geocaches onto my phone when I had a signal and now here we were.

The parking coordinates were about a mile down Road 640, off of Kinney Creek Road (2212). The person who hid the cache said the old trail was followable for part of the way, but you had to get to it first. From the roadside waypoint it looked pretty daunting, a thick wall of small trees and brush. 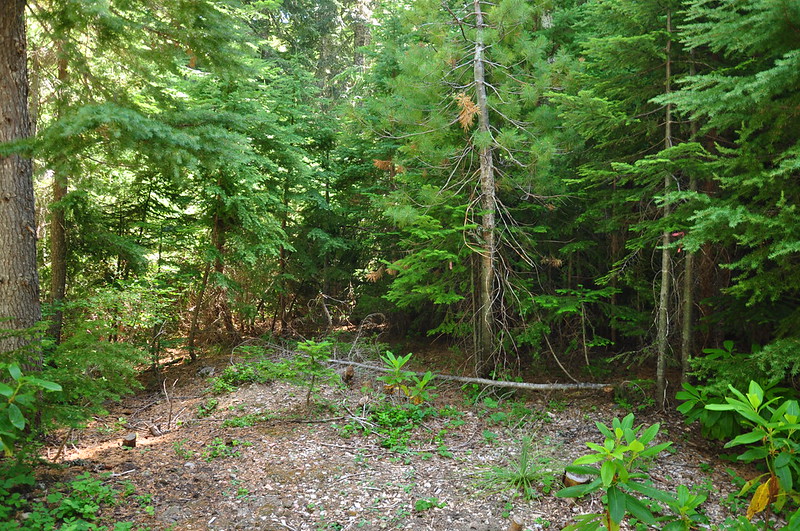 But once you pushed through that initial screen, it opened up into a mature forest, so we decided to go for it. At the “trailhead” we spotted an old road or trail signpost with the numbers 1, 2, and then a 6 or a 9. Cool artifact. 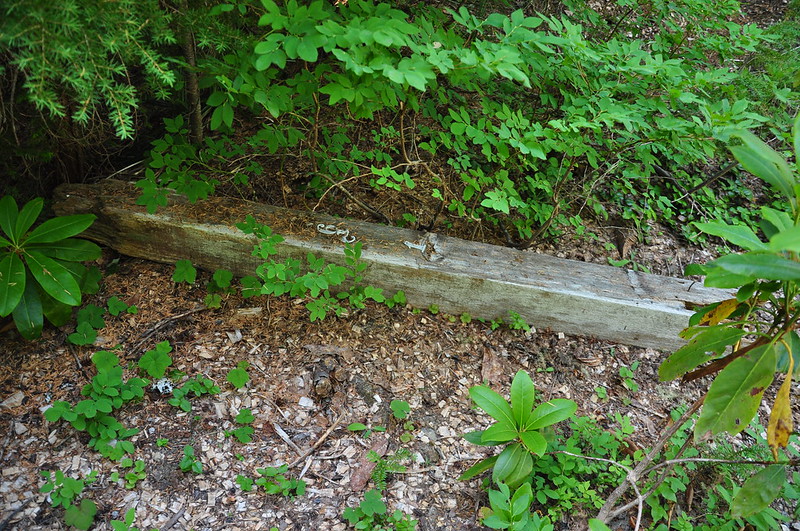 We headed generally uphill towards Slate Rock, hoping to pick up the old trail. There were a number of downed trees and – although they’re not present in this photo – a whole heck of a lot of rhododendrons: 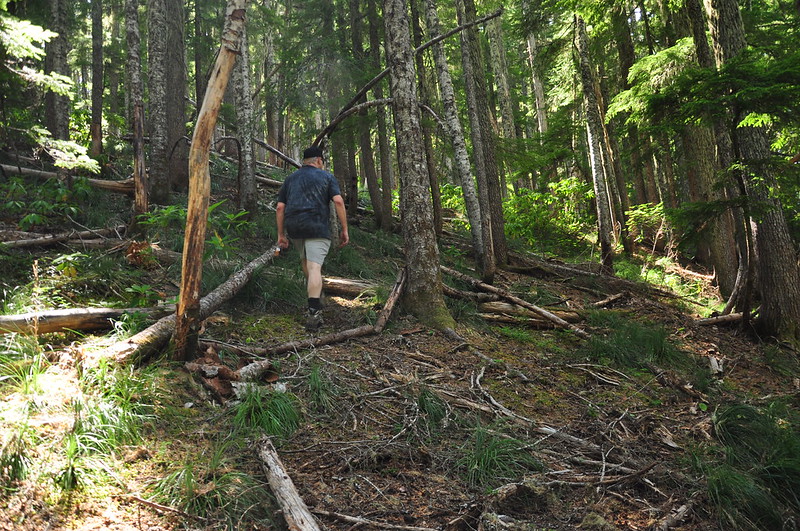 We could not find the old trail, so we just pushed our way straight uphill. It was not fun. We reached a rocky prominence that turned out to be not quite Slate Rock, but we had some views: 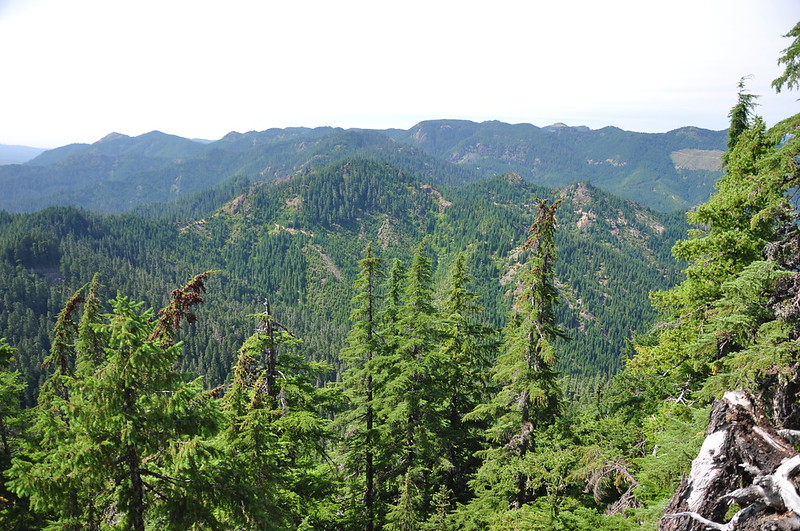 We could see Slate Rock so we made our way over to it. Along the way we got a view of Mt. Jefferson’s summit poking up above all the wildfire smoke. 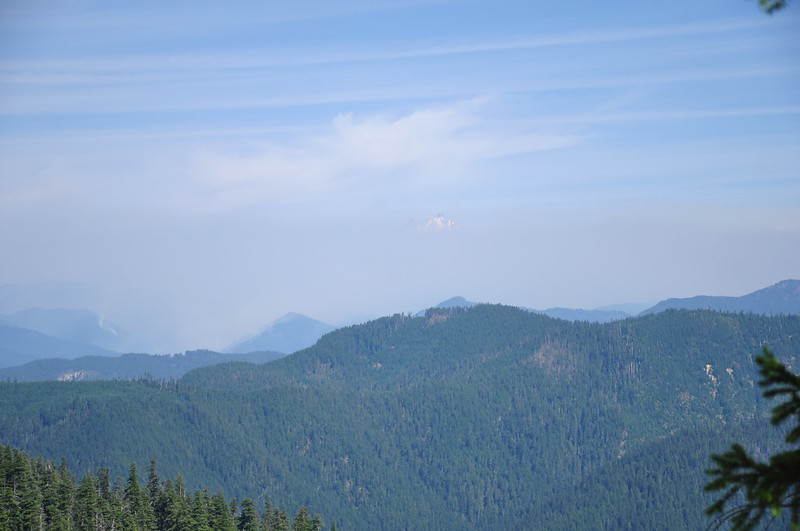 The Cascades south of Jeff: 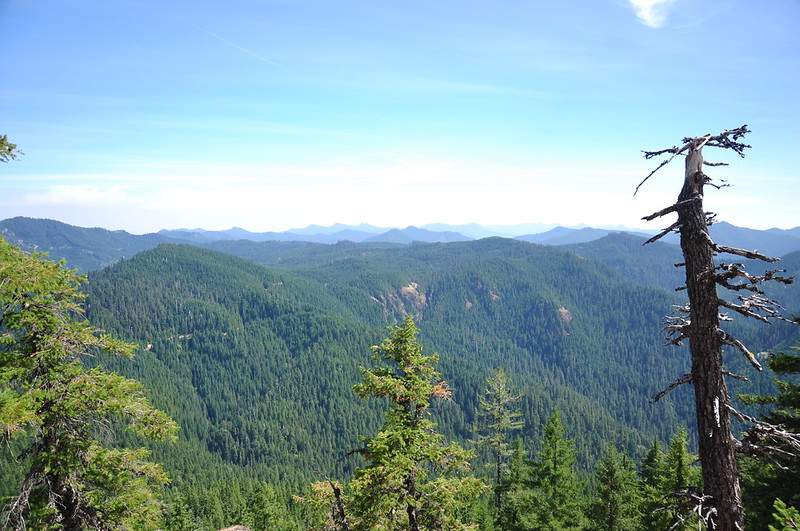 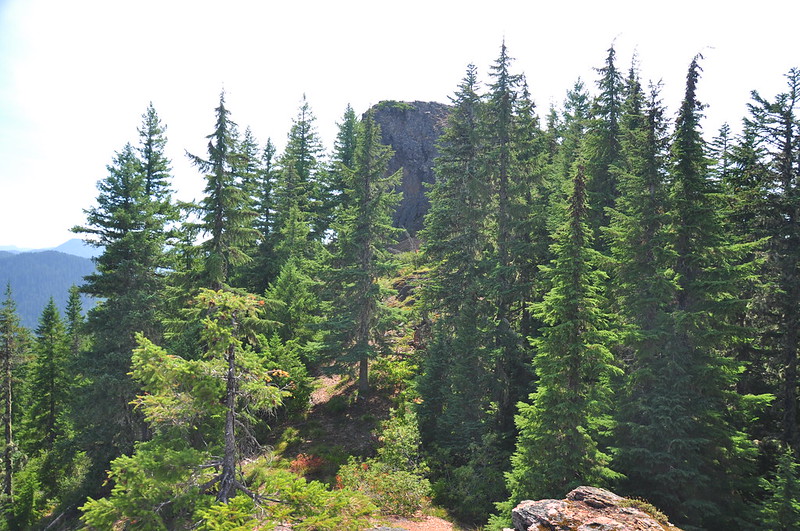 We found a buried stash of old bottles. 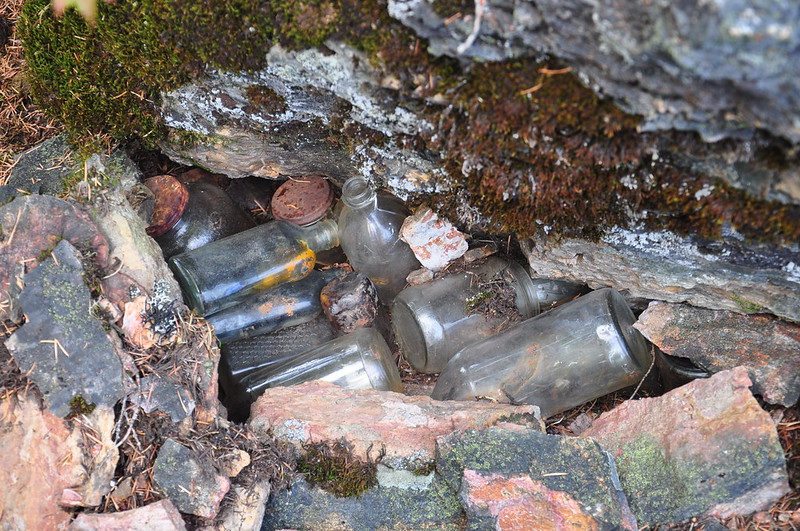 I was wary of climbing up Slate Rock because getting up isn’t the hard part; it’s getting down that can be tricky. But Greg headed up and took some shots on his iPhone. The views are still great up there, which is often not the case at abandoned lookout sites. Here, though, big tall trees cannot grow on the rocky summit: 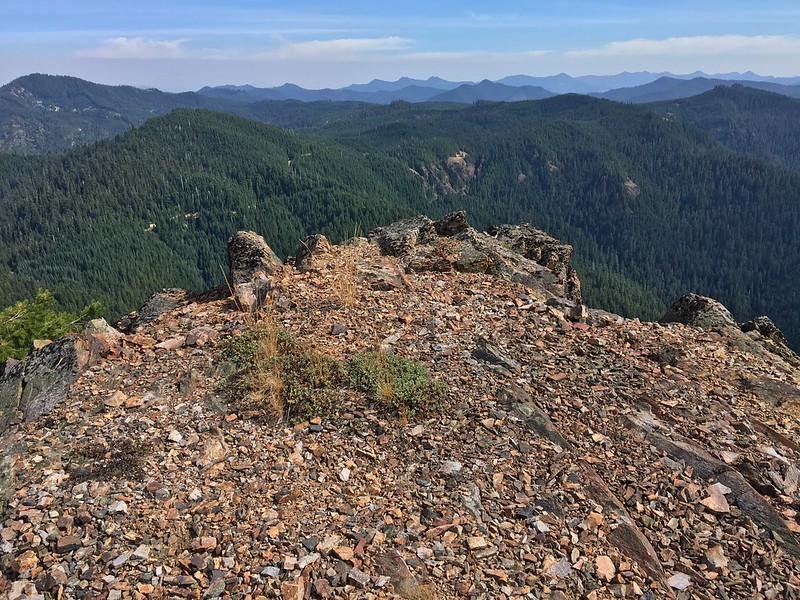 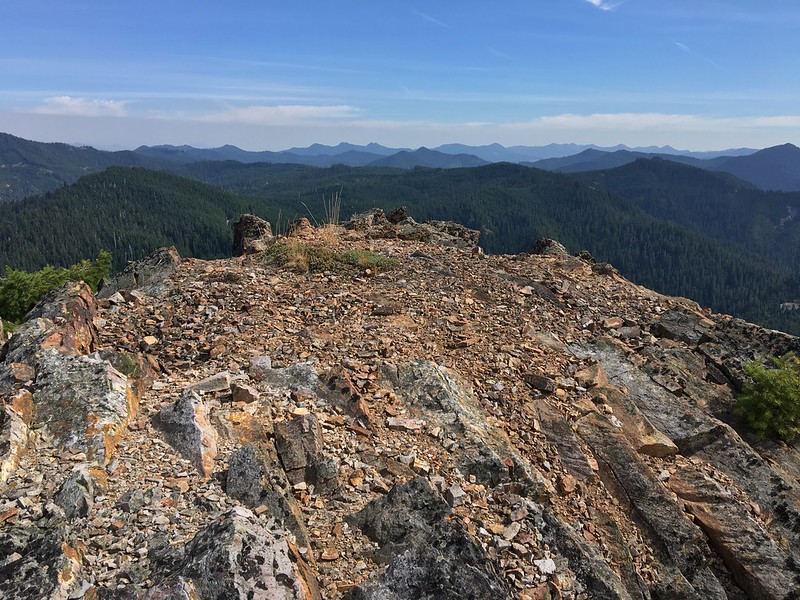 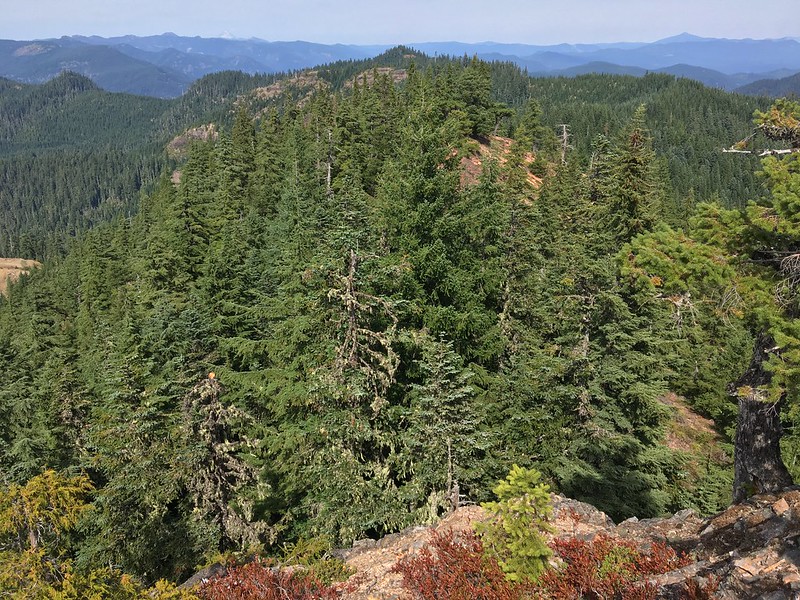 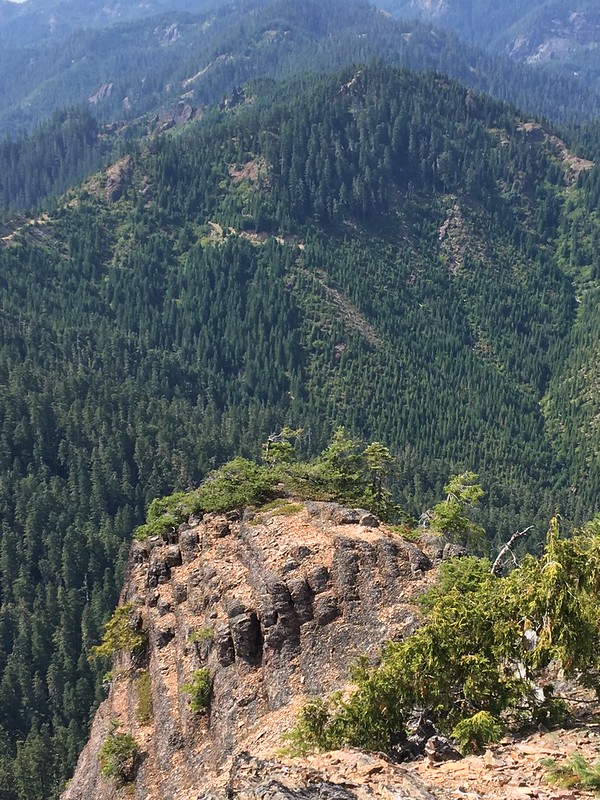 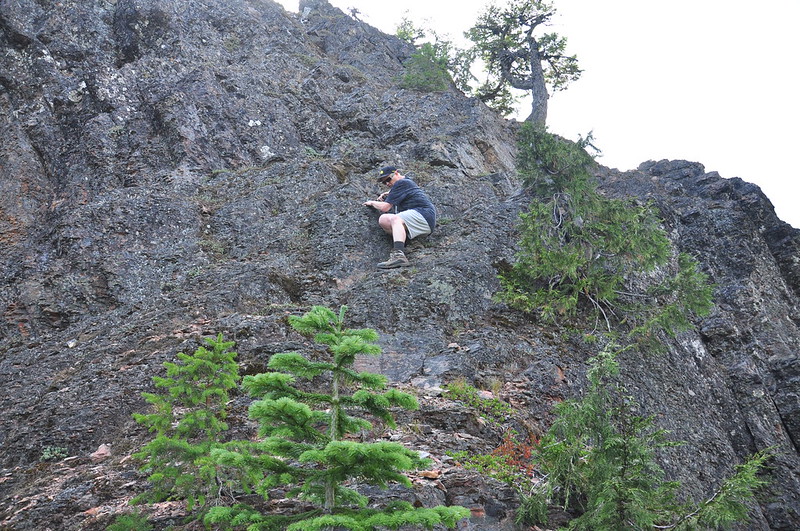 At Slate Rock we could clearly see the old trail so we decided to follow it and see it where it took us: 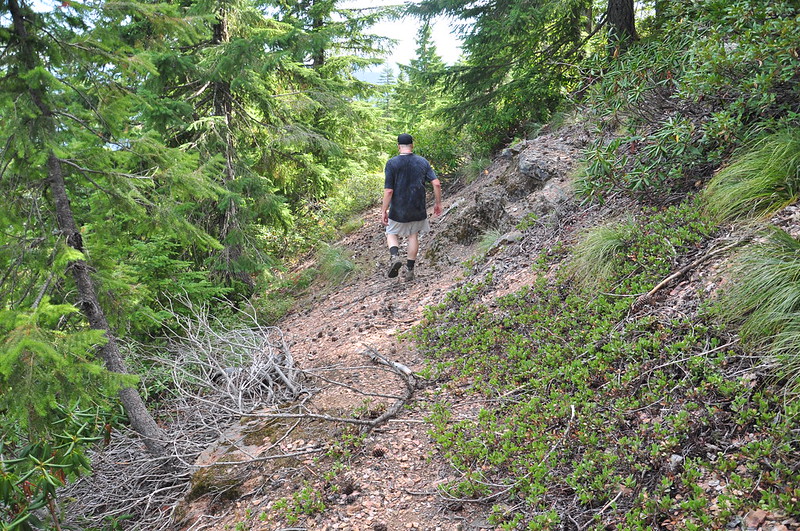 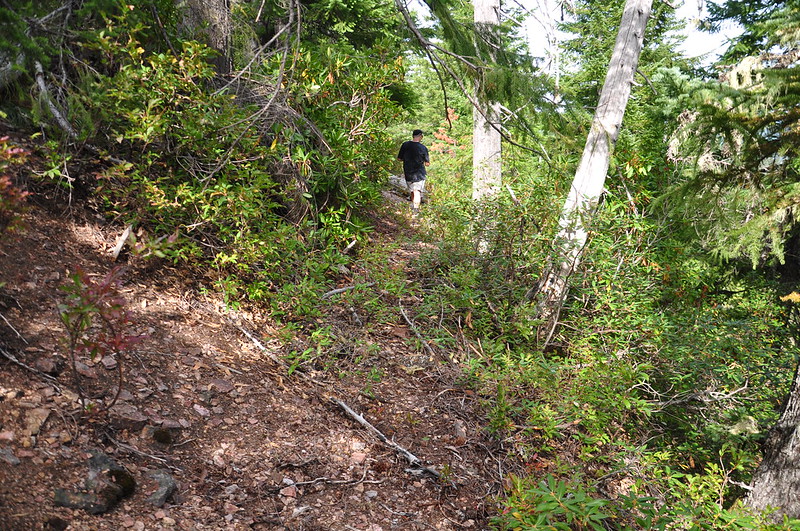 Looking back at Slate Rock from the trail below: 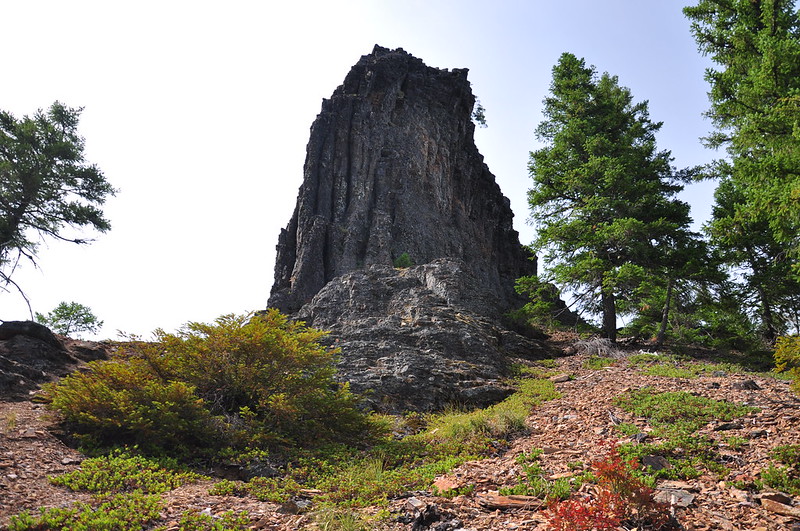 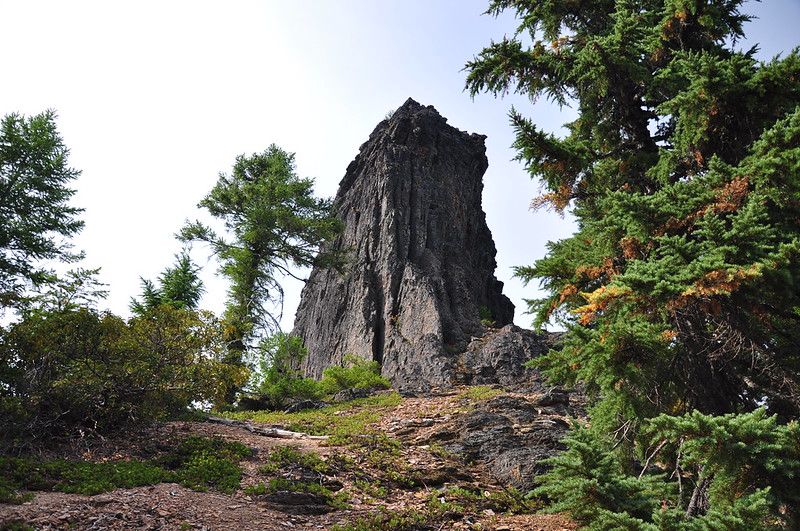 The trail kept going. It was in surprisingly good shape considering how long it’s been abandoned. Sometimes the rhodies had really grown in, but the trail was still easy to follow. 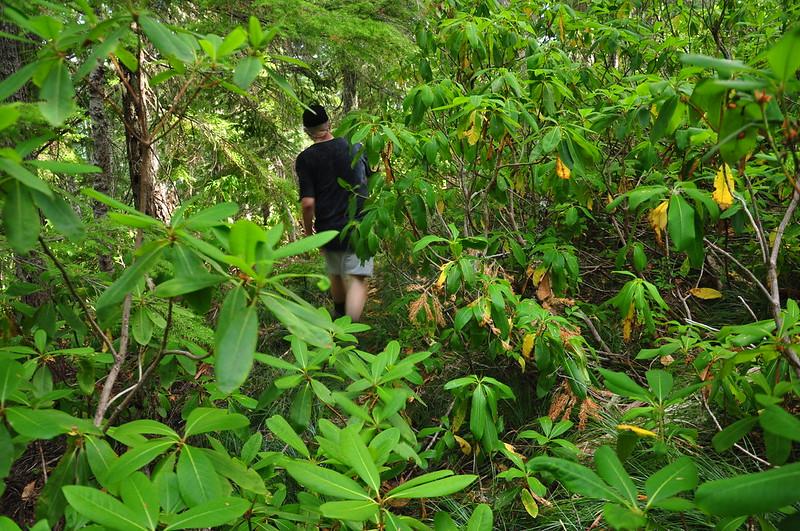 Until it wasn’t. Abruptly we lost the trail. It didn’t seem to go straight so we switchbacked, but it didn’t go that way either. We were close enough to the road, so we just went cross-country, never seeing any more remnants of the trail. When we got back to the car we were covered in pine needles, leaves, and spider webs. The summit is only about 0.3mi from where we parked, but it sure felt further! I’m glad we checked it out, though. It was pretty cool. We said to ourselves that if anyone wanted to bushwhack their way up there, they’d probably have the summit all to themselves for eclipse-viewing the next morning!

Here is our track. The line on top (or the left, depending on how you look at it) was our bushwhack up. The bottom line (or right line) is the route back, mostly via trail. The big X on the topo map is Slate Rock itself. 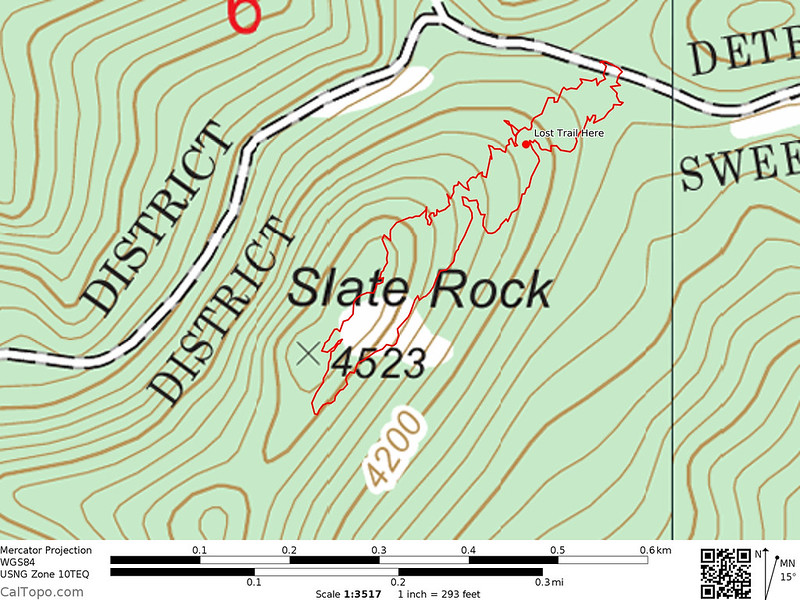 When I got home I looked up the history of Slate Rock. The lookout was built in 1935 and destroyed in 1965. 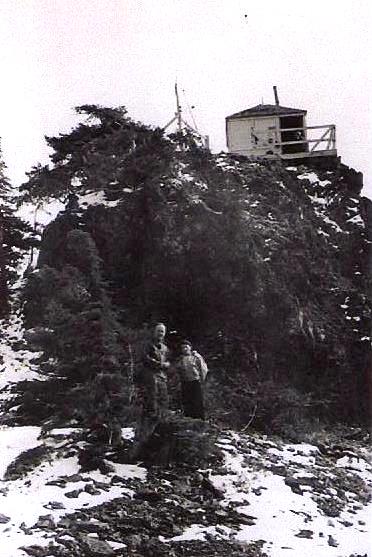 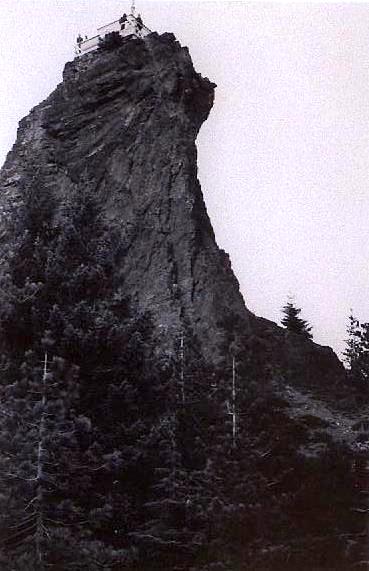 Back in the pre-road days  a side trail from the Volcano Trail (which I mentioned in this report from last year) led up to Slate Rock: 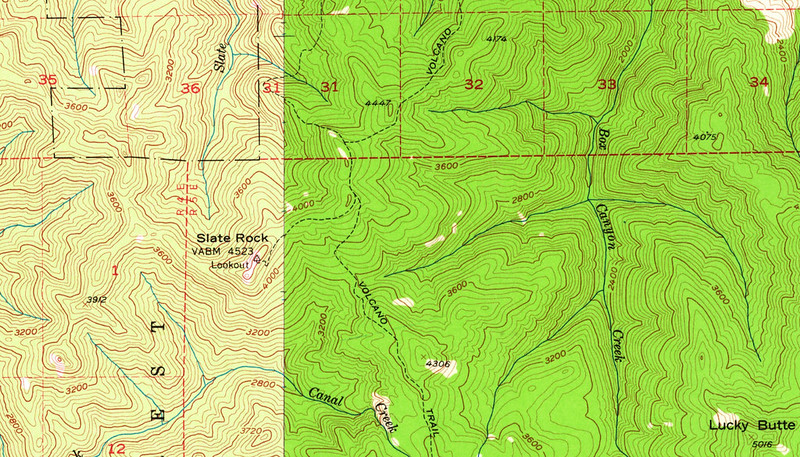 The trail network is still intact on the 1983 North Santiam River USGS map, but the 1985 Lawhead Creek USGS map shows the road, with no sign of a trail. So presumably the trail was abandoned sometime in the early 80s.