On Tuesday we left Vancouver and made the LONG drive across the province to Jasper National Park to kick off the Canadian Rockies portion of our trip. It was a beautiful drive almost the entire way, especially towards the end as we drove into the Rockies. Although we didn’t have time to spend in Mount Robson Provincial Park, we got a picture of the namesake mountain as we drove through the park on our way to Jasper. 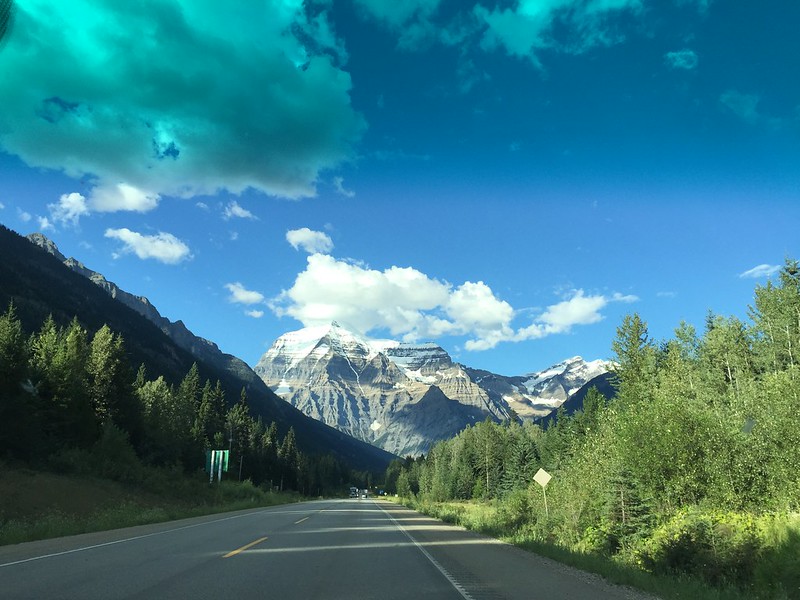 We stayed at a nice place south of the town of Jasper called Jasper House Bungalows. It had a nice little living area, kitchenette, bathroom, and bedroom. 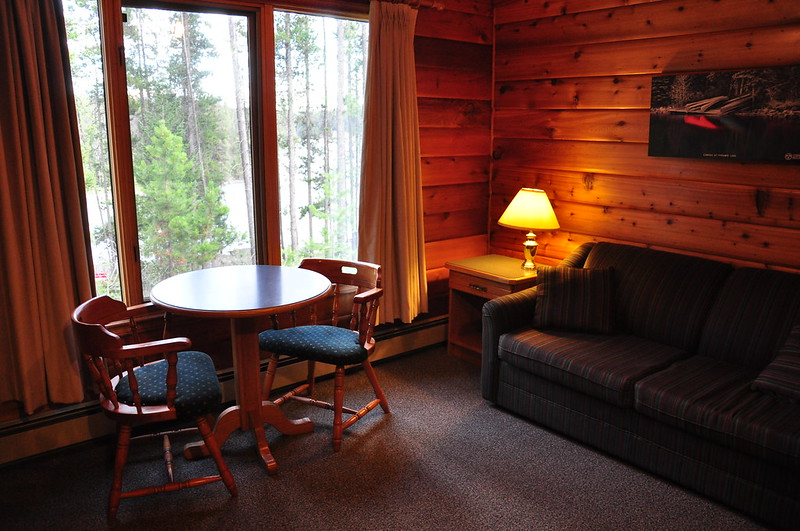 And right outside our door was this. Awesome! 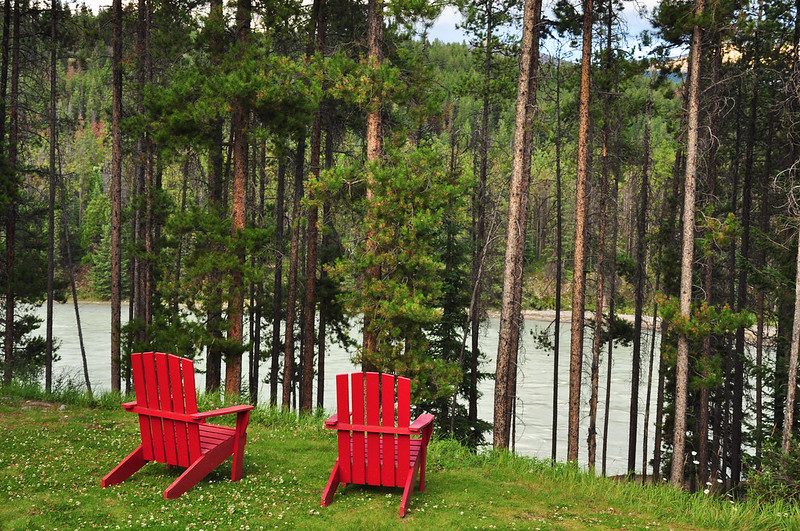 We couldn’t see the full sunset from where we were, but we could see some of the clouds turning colors. Welcome to the Rockies! 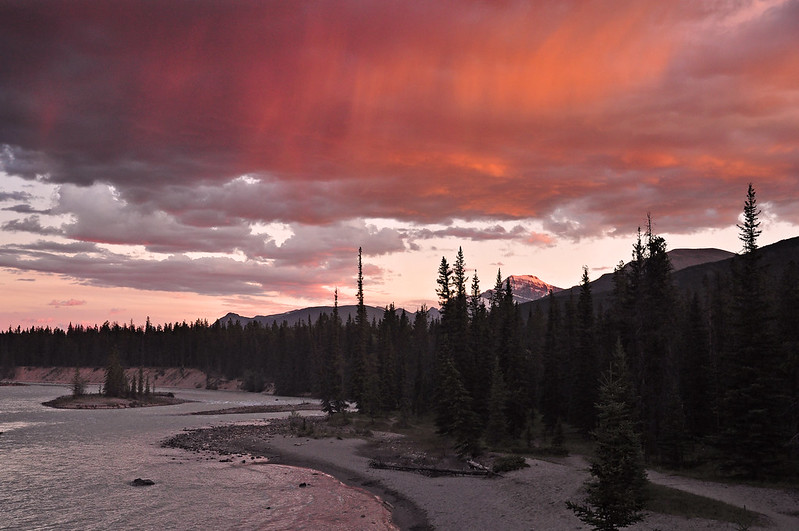 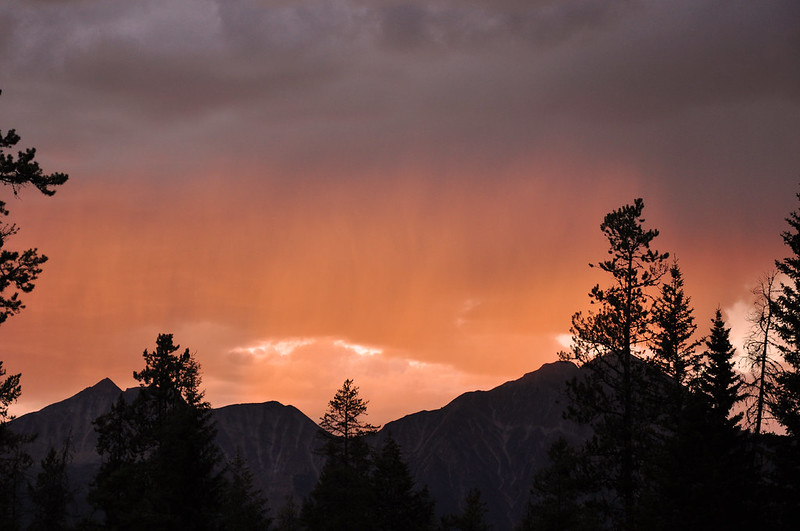 On Wednesday we drove down to Maligne Lake. We got there early before the crowds arrived and it was beautiful and peaceful. Photography was challenging due to the clouds (we would see A LOT of clouds on our trip), but it was still lovely. 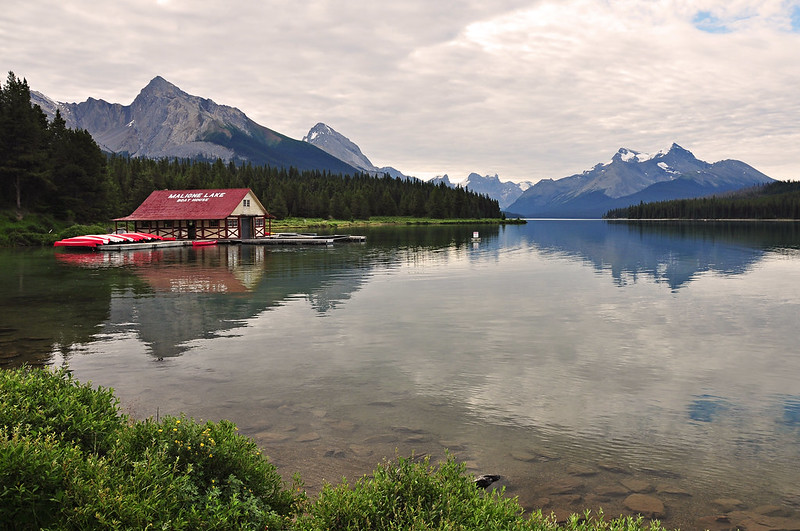 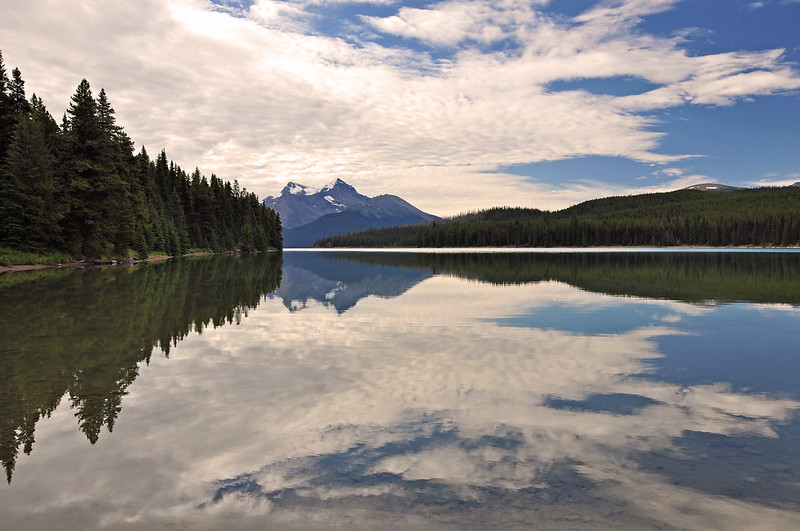 On the way back to the car we saw a deer having breakfast in the forest. 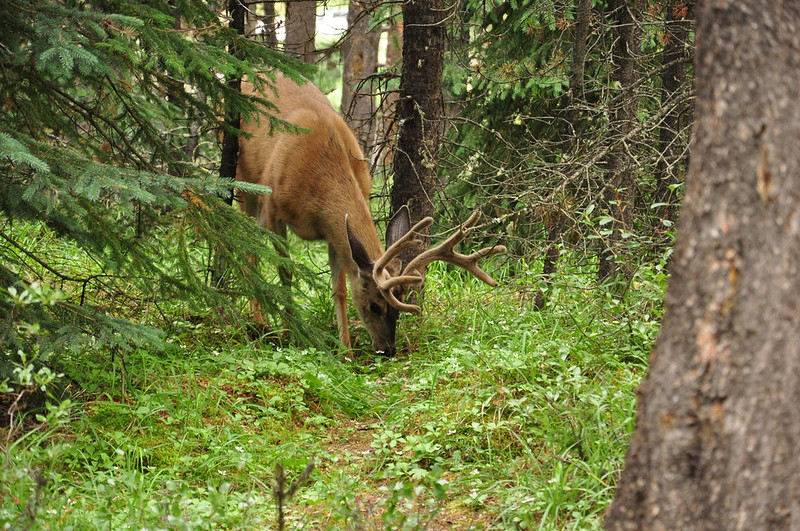 After admiring the lake we started off on the trail to Opal Hills. It is the steepest trail in the park, according to the sign at the trailhead. As ever, the steepness is not properly conveyed in photos. 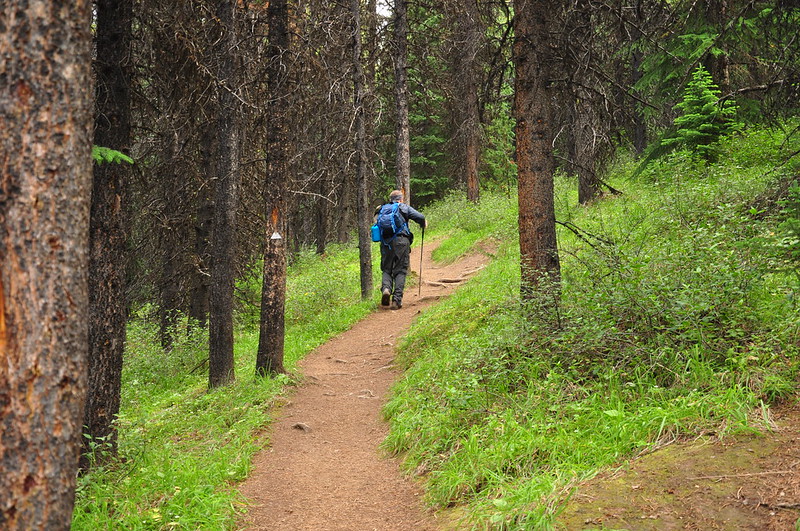 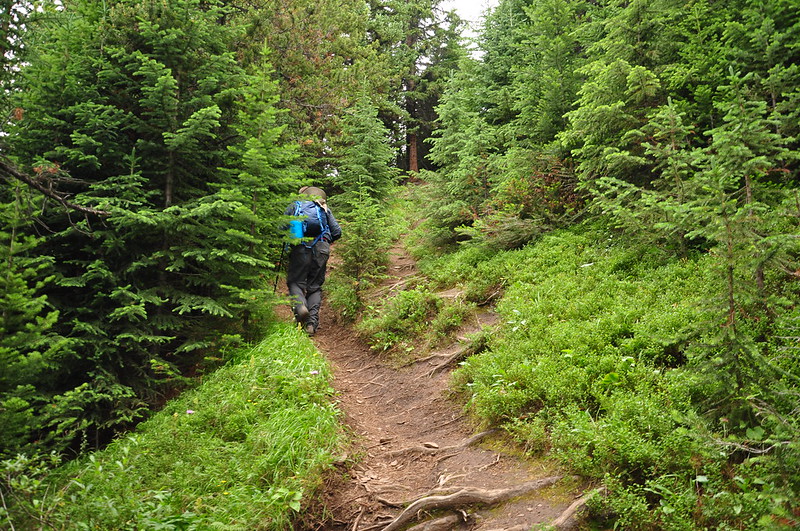 We tried to keep up with a group that was ahead of us, wanting to stay close to their noise since this is bear country. But they shot up the hill like it was flat ground and we soon fell behind. It didn’t help that we were hiking from about 5,500′ to 7,000′, an elevation we’re just not used to. Most hikes in Oregon top out at 4,000′ or 5,000′. The trail finally reached the meadows and we had a bit of a mountain view. This is a pano from my iPhone.

The trail travels through this lovely basin with green meadows and wildflowers. It was quite pretty! 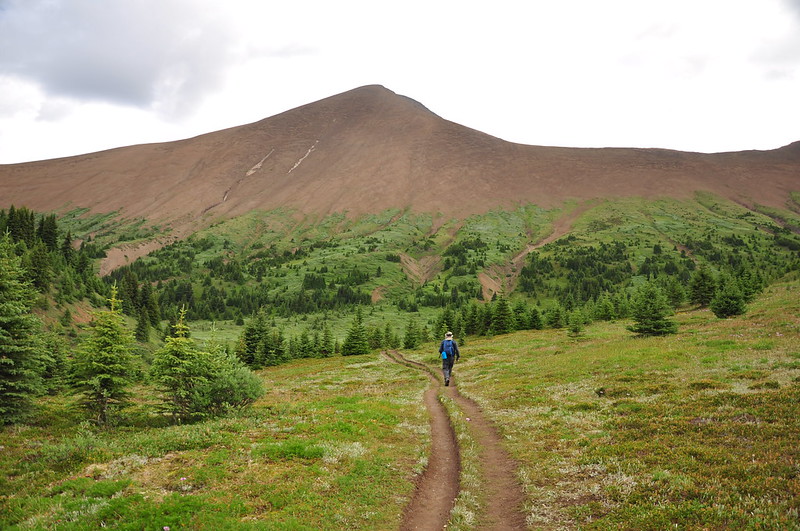 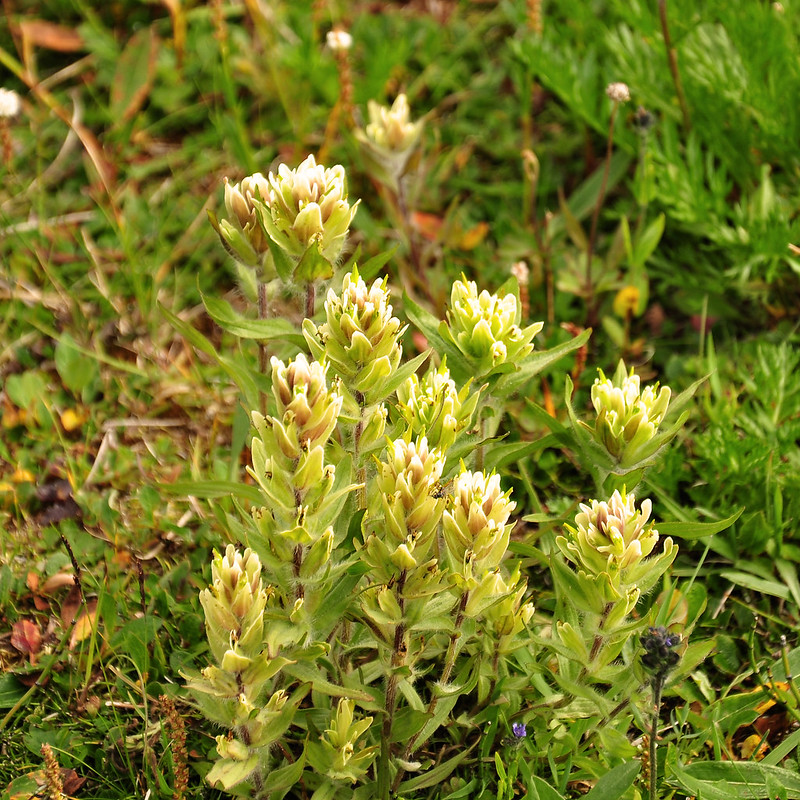 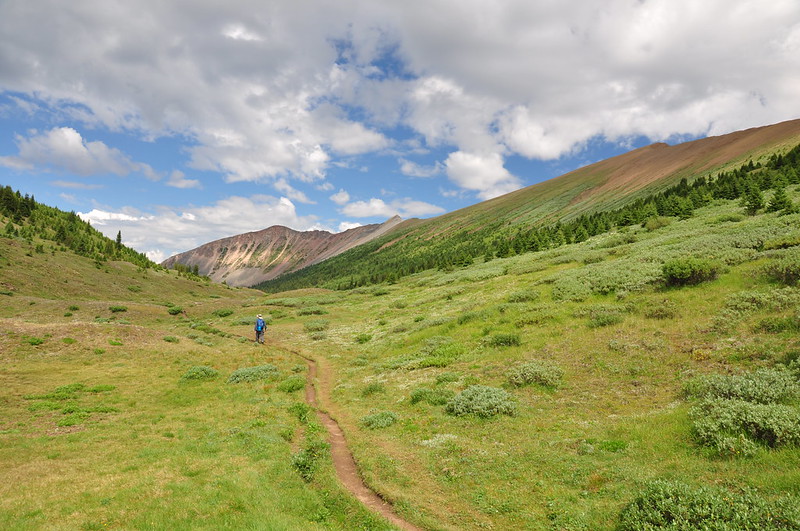 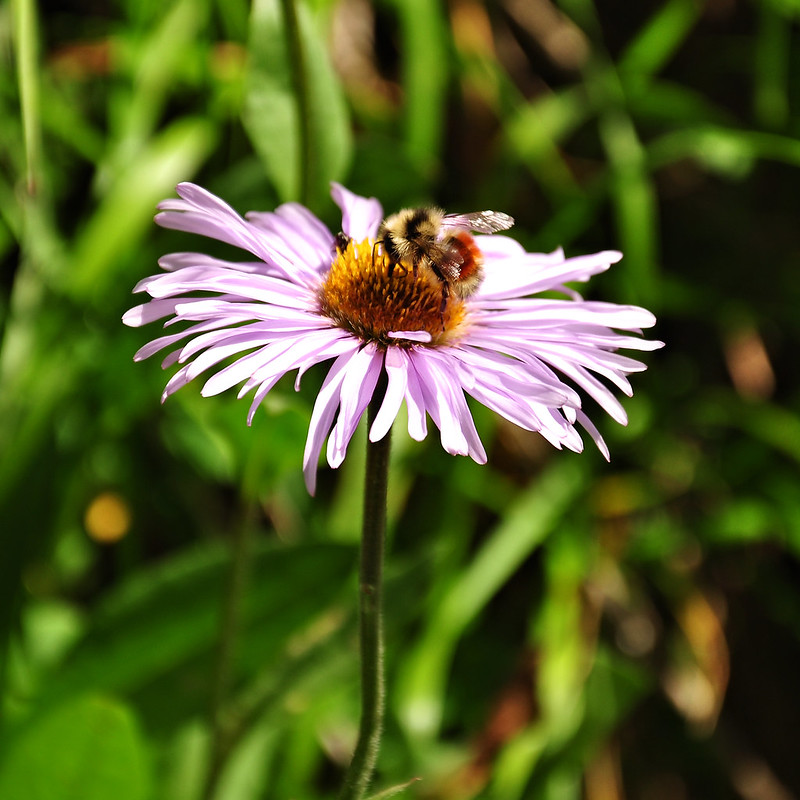 Our hiking book said “climb to the first knoll on the left for the best view of Maligne Lake.” We poked around, but didn’t see any knoll, just a big hill with a very steep slope, which you can see the bottom part of on the left side of the photo below. 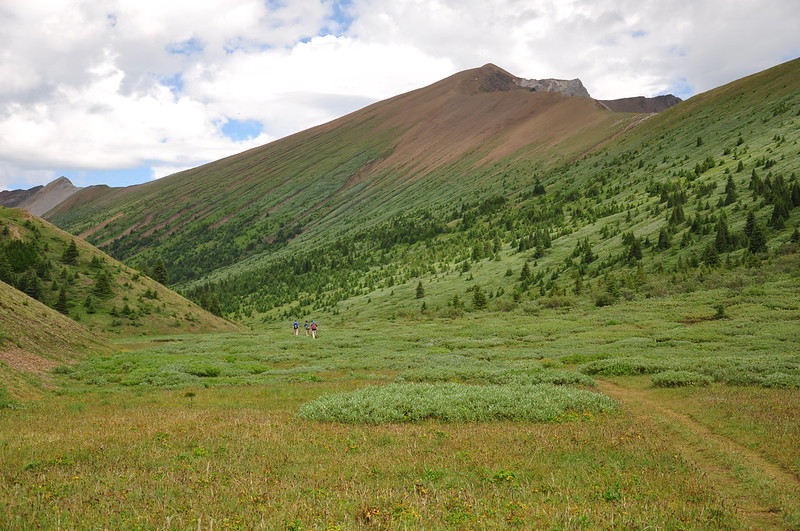 I actually think there may be a typo in the book and that the author meant to say “right” instead of “left.” There WAS a bootpath up a little hill when we first hit the meadows, but it was on the right so we didn’t think that was it. This track on everytrail.com shows the side trip and a photo from the top:

When we got to the northwest end of the meadow we were greeted with this  lovely view of the mountains. 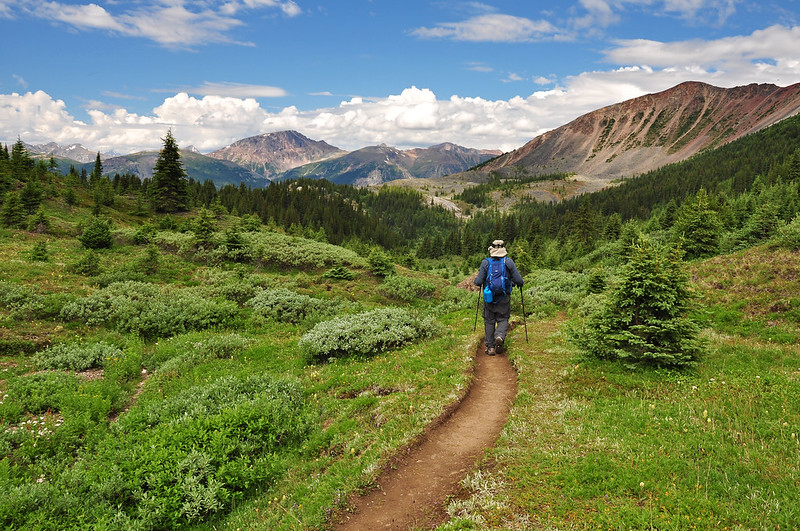 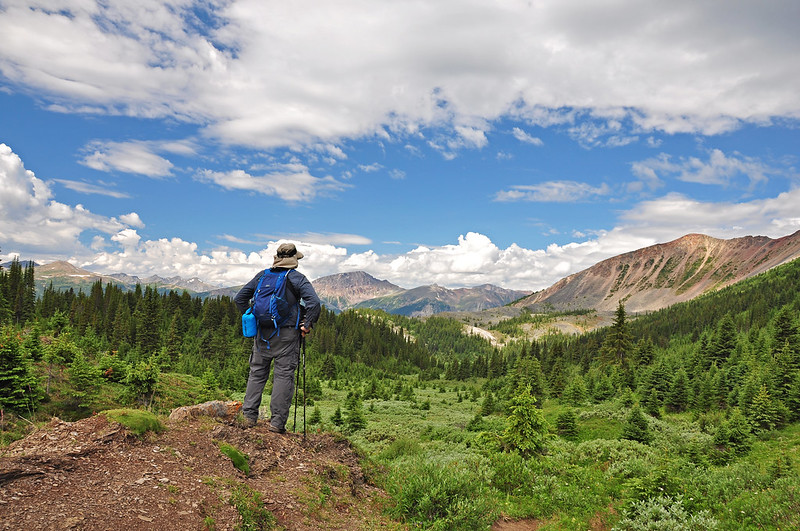 Then the trail dropped back into the trees and we descended steeply back to the trailhead. We had planned to do the nearby Bald Hills hike after this one but since it took us five hours to do the four-mile Opal Hills loop, we didn’t have time (or energy).

On the drive back up the Maligne Road we stopped at Medicine Lake, which is an unusual place. From the sign there:

The bedrock in this part of the Maligne Valley fractured severely during uplift. Rainwater and snowmelt entered cracks and slowly dissolved a network of underground passages.

The upper Maligne River sinks into this passages through many openings in the valley floor. In summer, meltwater from snow and glaciers swells the river, exceeding what the underground system can carry. The surplus water, dammed by a massive rock slide to the north, floods the basin and forms Medicine Lake.

At the onset of cooler weather in late August, the inflow is less than the drainage into the caves. The lake level drops, exposing the lake bottom until the cycle begins again the following summer. 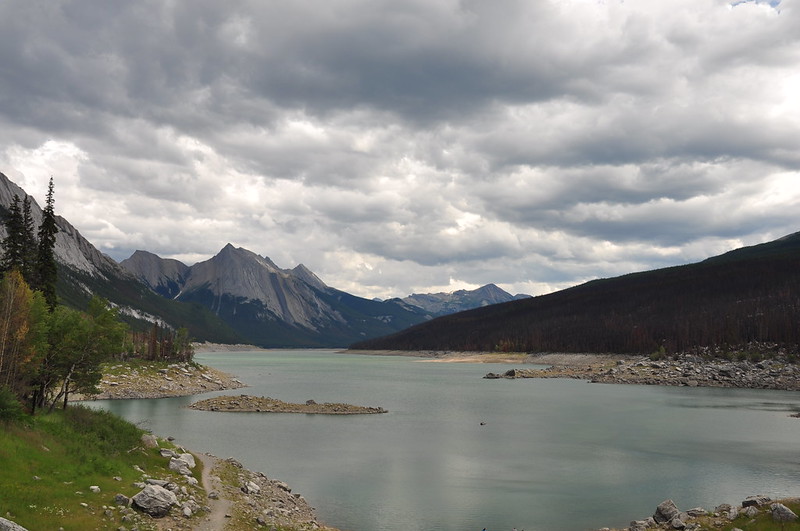 We then made a stop at Maligne Canyon. This is SUPER popular with tourists and was crazy busy, even though it was now early evening. The Maligne River travels through a super narrow limestone canyon here and there are bridges and trails that allow you to get a good look. 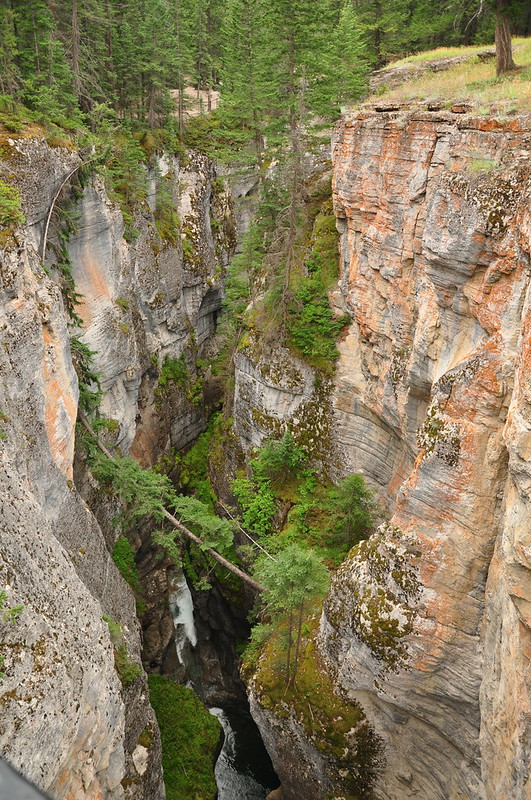 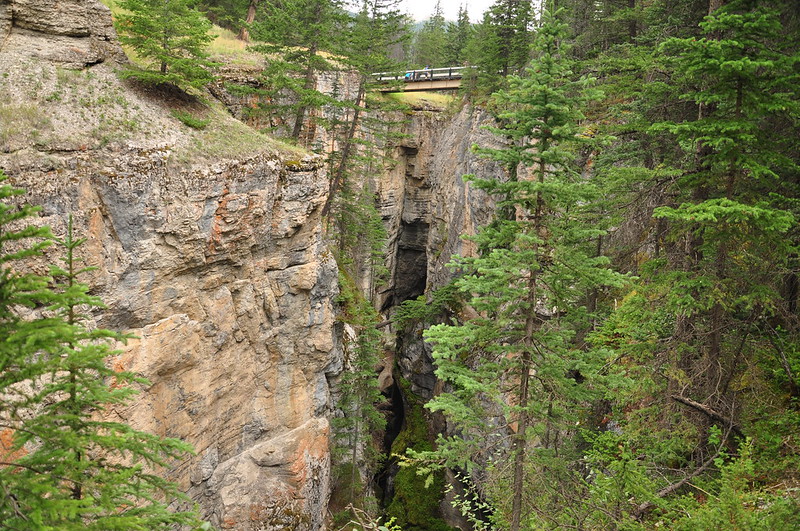 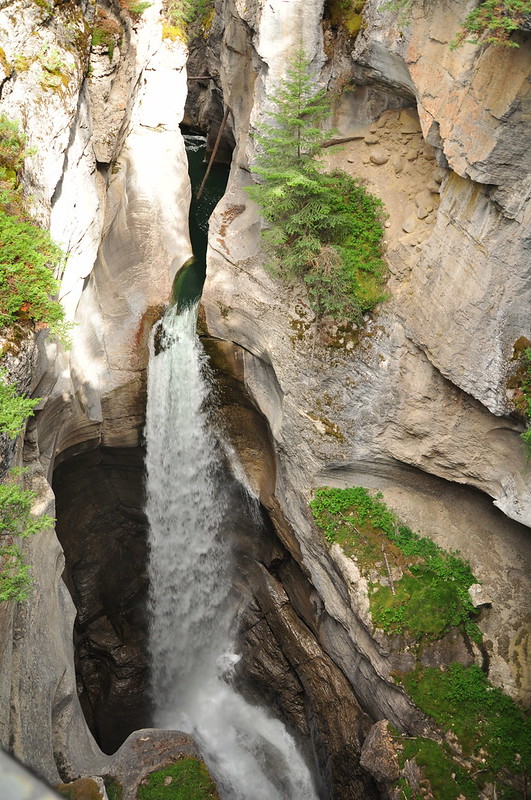 As we were driving back to town we saw a car pulled over, which usually means wildlife is around. Sure enough there was a black bear having a roadside snack. Greg got a few quick pics on his iPhone before we moved along. 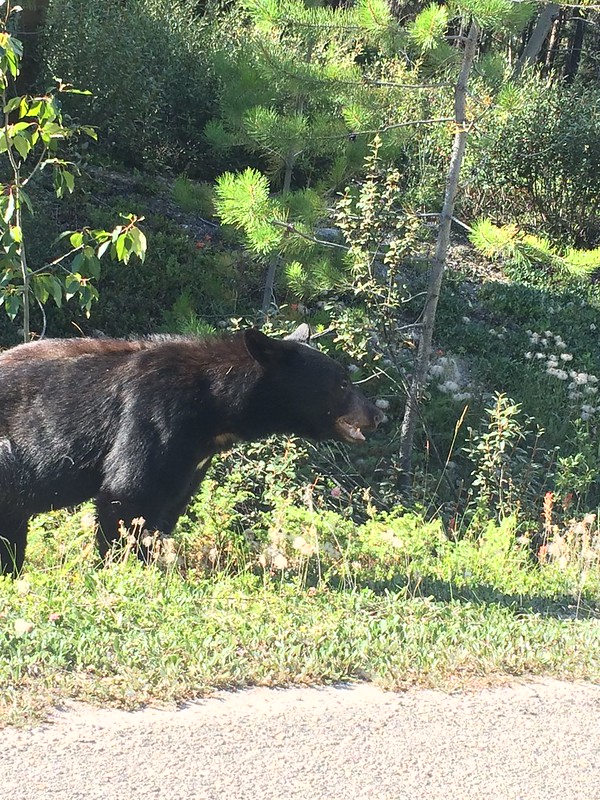 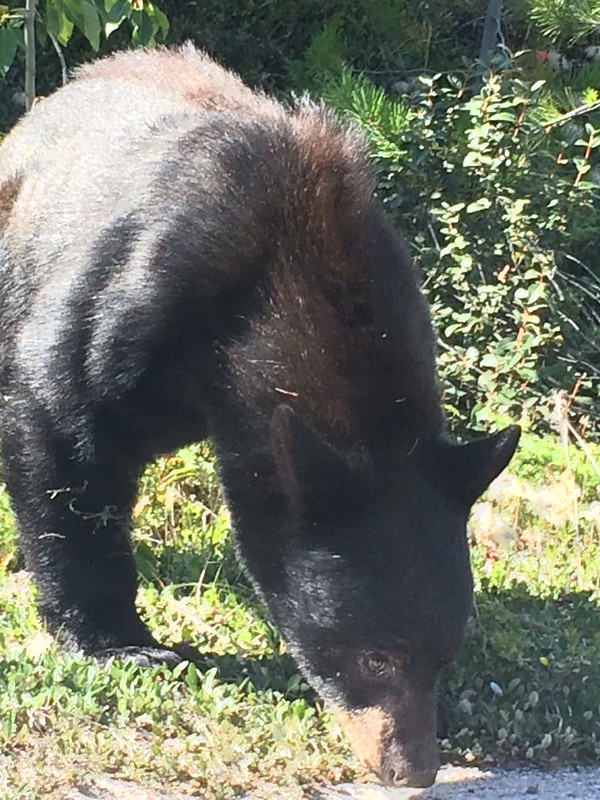 We stopped at Jasper Brewing for a delicious dinner. Our waitress told us that the town’s population swelled from 4,500 to 25,000 in the summer. Yikes! Then we went to the grocery store so we could eat in the next few nights. What a surreal experience. All the shoppers were clearly tourists. I wonder if the locals ever shop there?