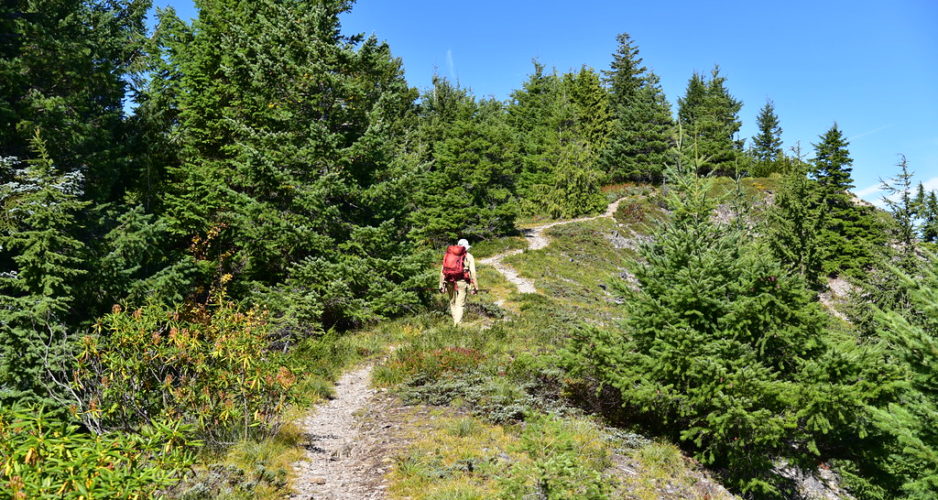 Today was supposed to be gorgeous so Greg and I decided to do the Table Rock hike. END_OF_DOCUMENT_TOKEN_TO_BE_REPLACED

Last year on October 14, my sister and I went hiking in the Table Rock Wilderness and stumbled on some fantastic fall color. There’s a fair amount of vine maple along this hike, especially in the rock slide areas, and it was all quite colorful. Plus, it was a clear enough day that we were able to see the nearest peaks (Mt. Hood and Mt. Jefferson) and we could barely make out Washington’s peaks. Pictures here.

Hoping to see some of that same fall color, Greg Lief and I headed out to Table Rock this Sunday (10/7). It was a week earlier than when I went last year, but the color seems a little early this year anyway, and similar sites with the same elevation are seeing color already, so we decided to go for it. Jarhead already covered the specifics of this hike pretty well in his trip report, so I’ll try not to repeat.

The day was pretty cloudy. At times the clouds were quite low, including when we bushwhacked from the trail to the bottom of the first rock slide. The tops of the trees above us were faint through the fog. But the vine maple on that rock slide was pretty, and worth the effort of hacking through alder and devil’s club to get there. 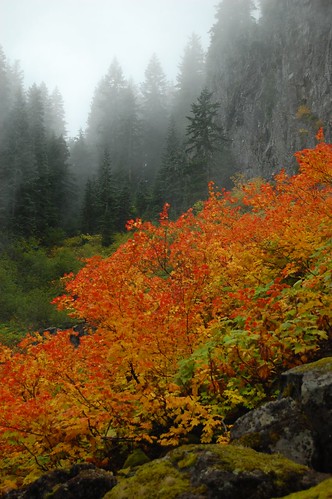 Back on the trail, we passed vine maple that last year had been bright yellow, but on Sunday was just barely starting to turn. Darn it! We continued on to the summit, or rather, the small rocky area just below the summit, where we had a hope of not being blown off the mountain by some pretty fierce winds. It was too cloudy to see even Mt. Jefferson, and sometimes we were totally socked in, not even able to see Rooster Rock or the surrounding valleys and hills. But with the wind and clouds swirling around, we ended up witnessing what I call “cloud dancing” and it was pretty cool. Wisps and swirls and towers of clouds moving about in the valleys below and over the nearby ridge tops. Often, we could see the Willamette Valley to the west beneath a gap in the clouds, which was pretty strange. Sometimes we could see the base of Mt. Hood and the lower parts of the Cascades. 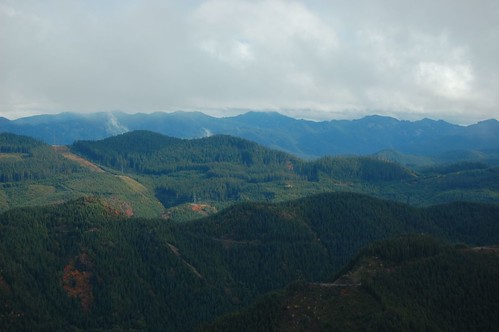 After about 20-30 minutes of watching the dance of the clouds, we headed back down, catching some more rock slide vine maple on that one really big slide that the trail crosses. It had been socked in on our way up. We also heard the delightful “meep!” of pikas, but never saw any of them. 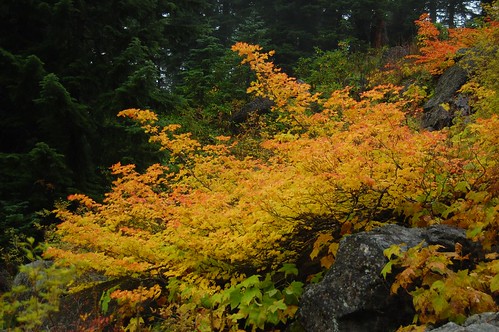 One thing I noticed on this hike that I failed to notice last year is the HUGE abundance of bear grass and rhododendron. So this is a place I definitely want to return to next summer on a clear day, for wildflower goodness and volcano views.

Oh yeah, the drive in to the trailhead is pretty awesome right now, driving up the Molalla River. The big leaf maple along there is truly gorgeous! We stopped once for pictures, even as the light rapidly faded in the shadow of a tremendous rain storm that started dumping about 45 minutes later. We never got rained on while hiking, though! 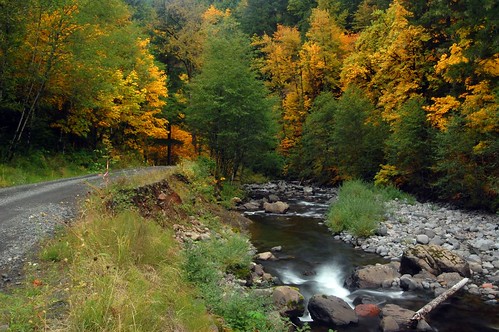 So if you’re looking for some fall color, it’ll probably start looking really vivid there this weekend and into the final weeks of October!