Hiked up to the top of Olallie Butte yesterday. Saw a little bit of early fall color along the trail. Fall is beautiful but I’m not ready yet! After climbing through the trees for a long time we finally broke out into the open. The vegetation is a lot different up here than down below and there are a lot of tree skeletons. Views were awesome even before we reached the summit. Here’s Mt. Jefferson and Olallie Lake. Up on the summit we headed over to the site of the fire lookout that once stood here. Here’s what it looked like in 1932. 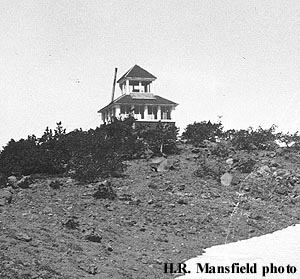 The lookout was abandoned in 1967 and the cupola collapsed through the roof in 1982. In the past 30 years the various pieces of the old lookout have scattered far and wide across the summit and down the slopes of the mountain. Here is the site of the lookout. Looking south across the big wide summit towards Mt. Jefferson, which is enveloped in smoke from the nearby Waterfalls 2 fire. Looking northeast from the summit. Looking west. The foreground bump just right of center is Potato Butte, which I hiked up in 2007. To the left of it you can just barely make out the string of lakes that you hike past if you approach Potato Butte from the west. Here is the reverse view from my 2007 hike, looking at Olallie Butte from Potato Butte. We headed over to the other part of the summit for better views of Mt. Jefferson. It was a pretty smoky view, but we could make out Broken Top and the Three Sisters. Plenty of smoke from the Waterfalls 2 fire. We had checked Inciweb before our hike and we checked it again last night. Despite how it looks the fire is contained. Here’s some of the burned area from the 2010 View Lake fire. Man, this area just keeps getting hit hard by fires! Looking back across to the other part of the summit where we just were. There was some kind of temporary radio equipment up there. It appeared to be there because of the nearby wildfire. On the summit we saw these roots, although I’m not sure what they are roots of. They looked like evil creeping tentacles from some underground creature! Stopping to admire the view again on the way back down. About 20 minutes before reaching the car we could hear target shooting. Great. It sounded like it was coming from the direction of the TH. Sure enough just down the hill from the car were these guys shooting at….the hillside? I hope they cleaned up after themselves, but based on past experience I doubt it. We drove down to Olallie Lake to get a cold drink. In addition to a cold root beer I was able to buy an Otter Pop. AWESOME! We sat on the store’s porch and admired the view. It’s so peaceful here. THANK GOD motor boats aren’t allowed. We were imagining what a nightmare of noise nearby Detroit Lake must be at that moment. Here’s the view of the butte from the lake. I climbed that?? No wonder I’m tired. On the way out we stopped to check out the cabin at Olallie Meadow. Anyone know the story of this cabin? It doesn’t appear to be in the rental program and is pretty grody inside. Lots of mice/rat poop and bird poop and bird’s nests. Too bad they don’t maintain it because it’s a cute little cabin.