After visiting Wagontire Mountain the previous day, today I visited Riddle Mountain. I got an early start knowing that a drenching rainstorm was coming in later. I knew how to get here, but just out of curiosity I turned on navigation on Google Maps. Sure enough it tried to take me down a little-used jeep track at one point. So just a reminder to never trust Google Maps when traveling on public land. Directions are at the bottom of this post, if you need them.

I had read there were gates on the access road. This was the first (Riddle Mountain in the background): 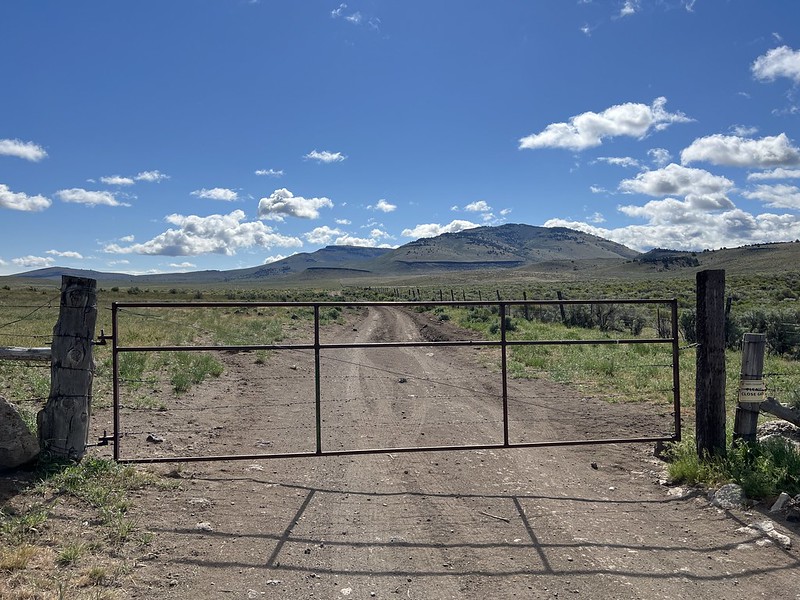 The second and third were open. I stopped at the fourth one and parked. I could have driven on from here, but with A LOT of driving time this weekend I was in need of exercise: 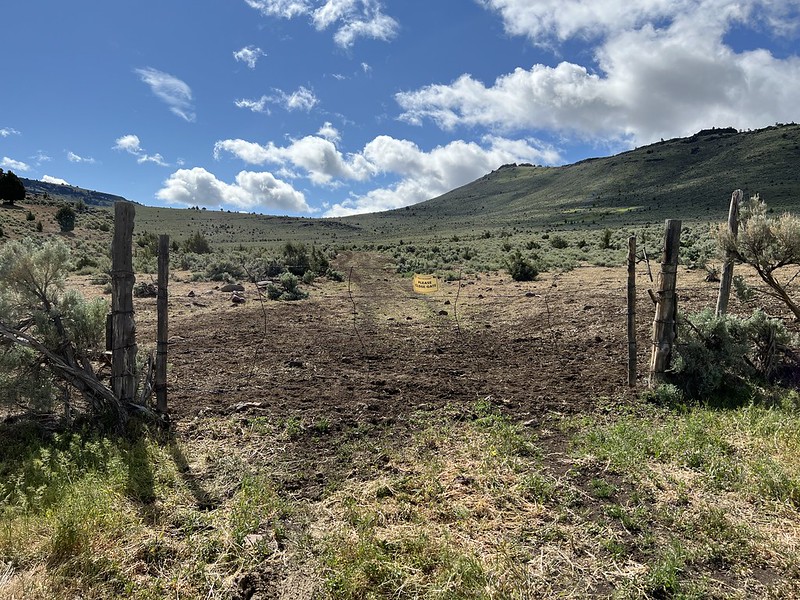 This is BLM grazing land. The cows were curious of me, then afraid: 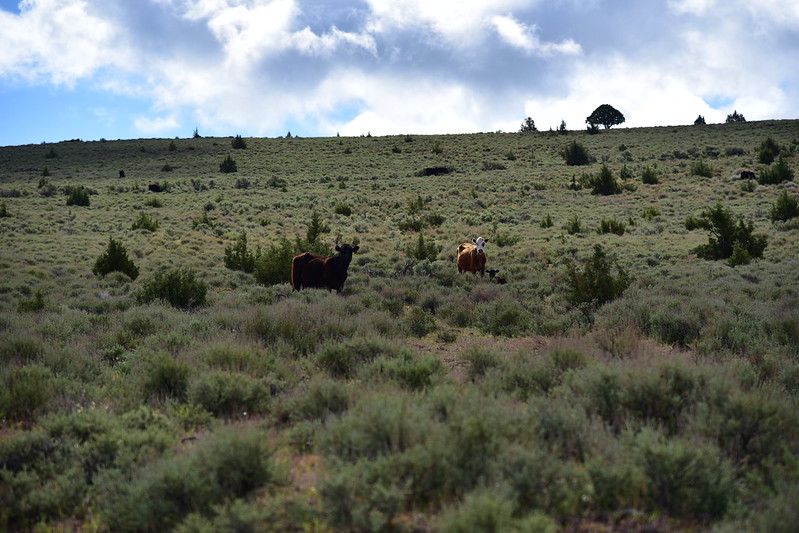 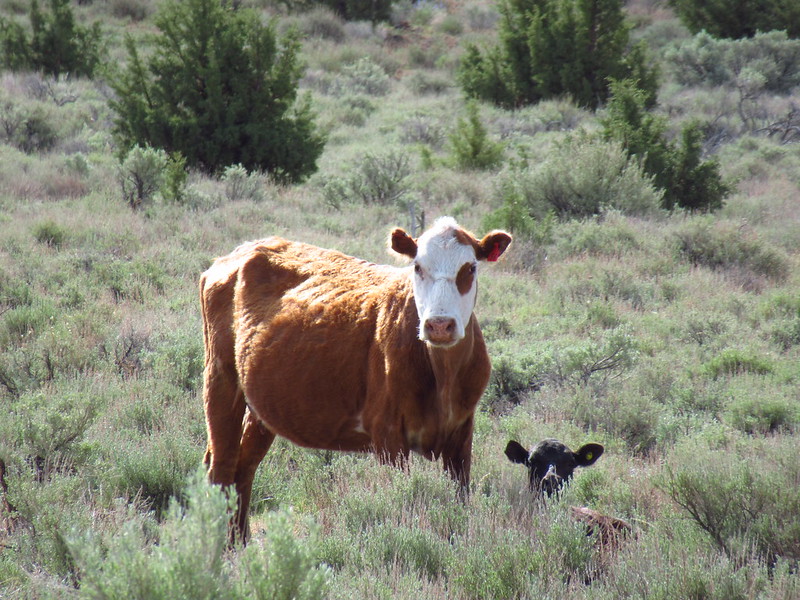 Once the road got steeper I left the cows behind. This section clearly isn’t driven often, and although the middle strip of vegetation was sometimes pretty high, the road was mostly in pretty good shape: 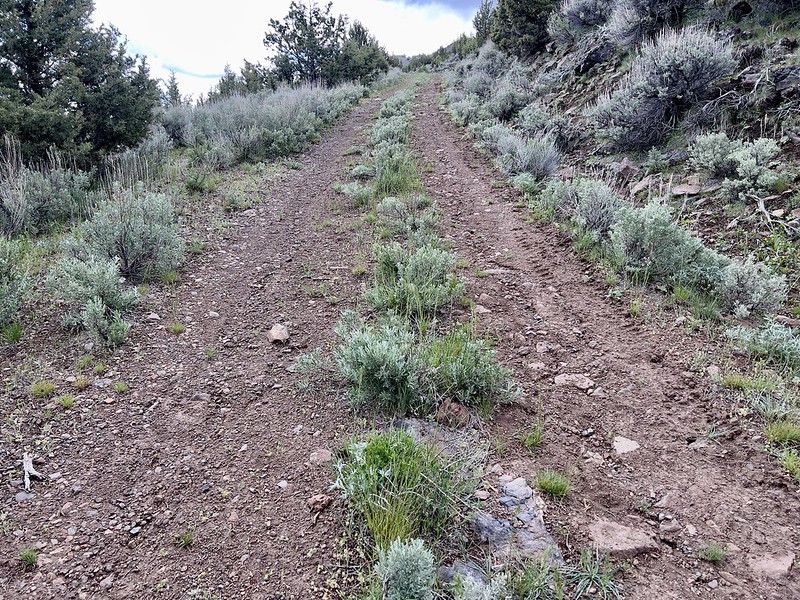 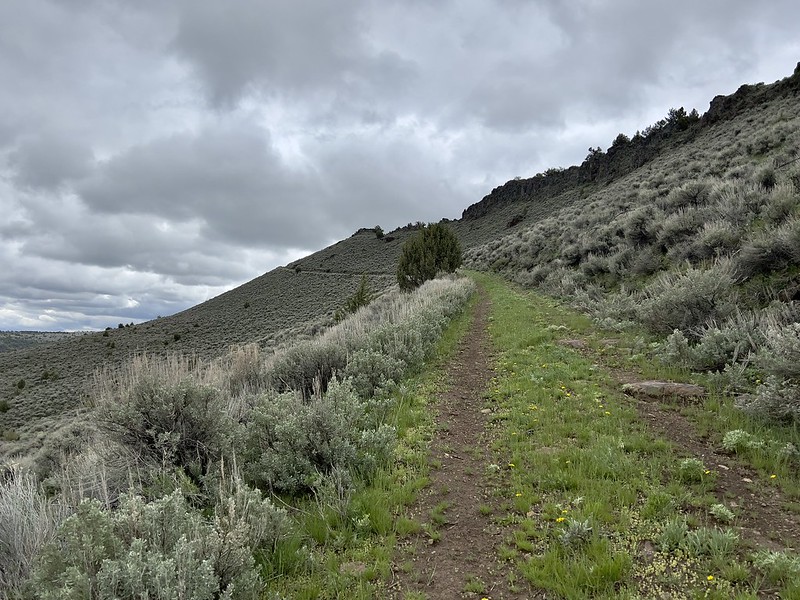 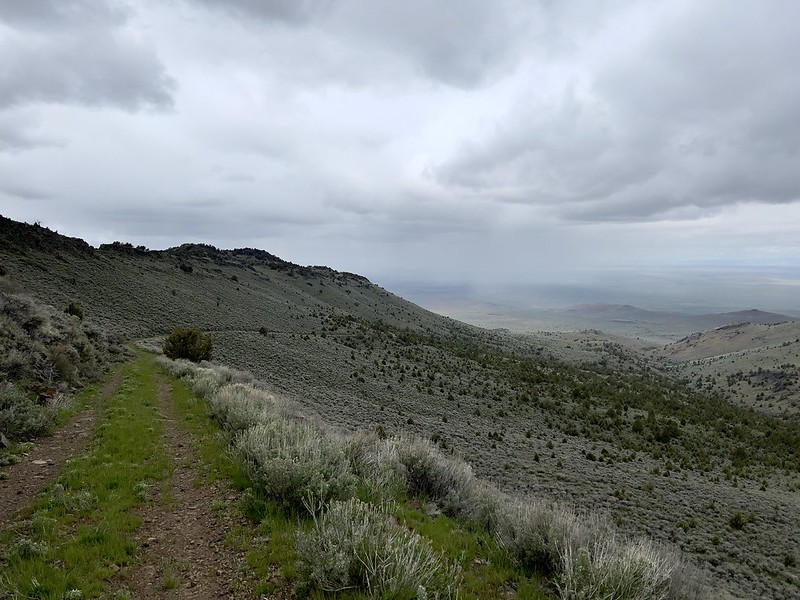 The lookout didn’t come into sight until I was almost there: 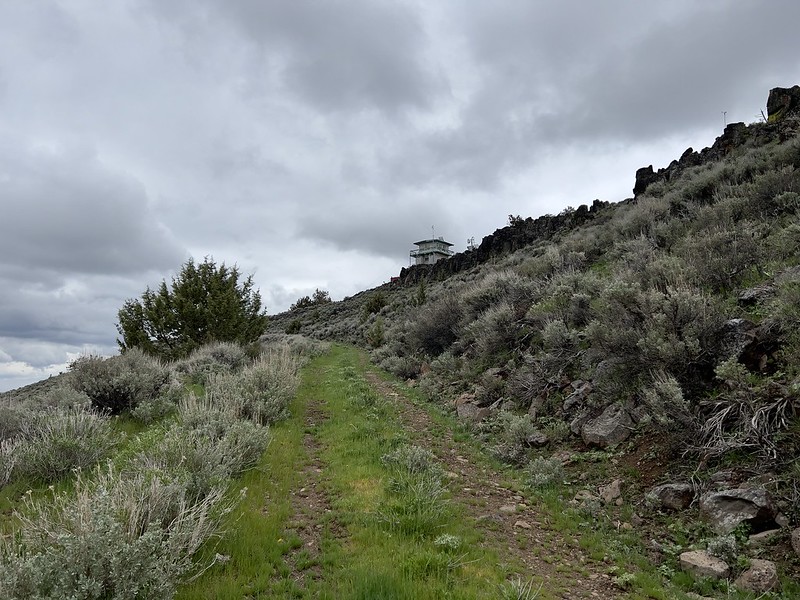 After 2.8 miles and 1,600′ elevation gain I arrived. As I did the day before, I had to shelter behind the lookout due to the bad weather and high winds: 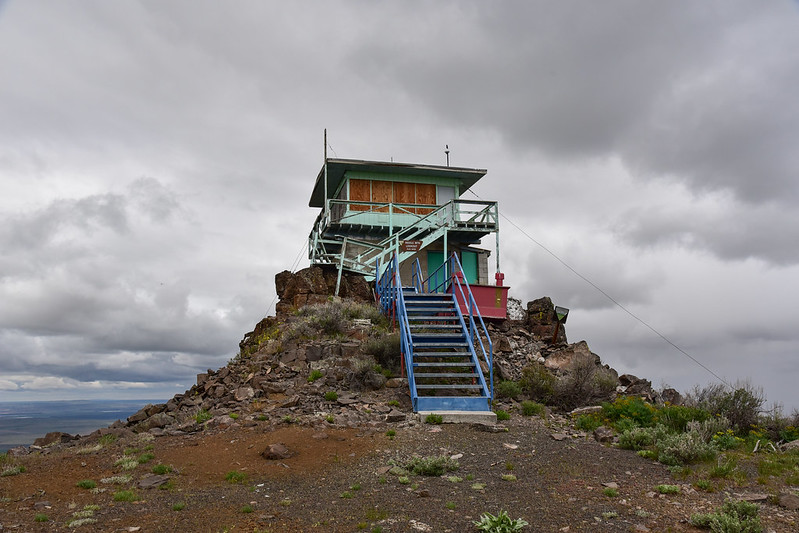 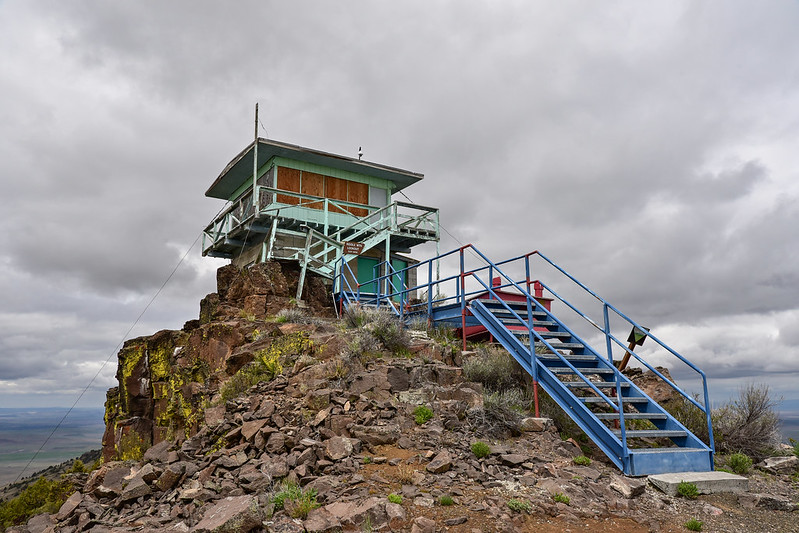 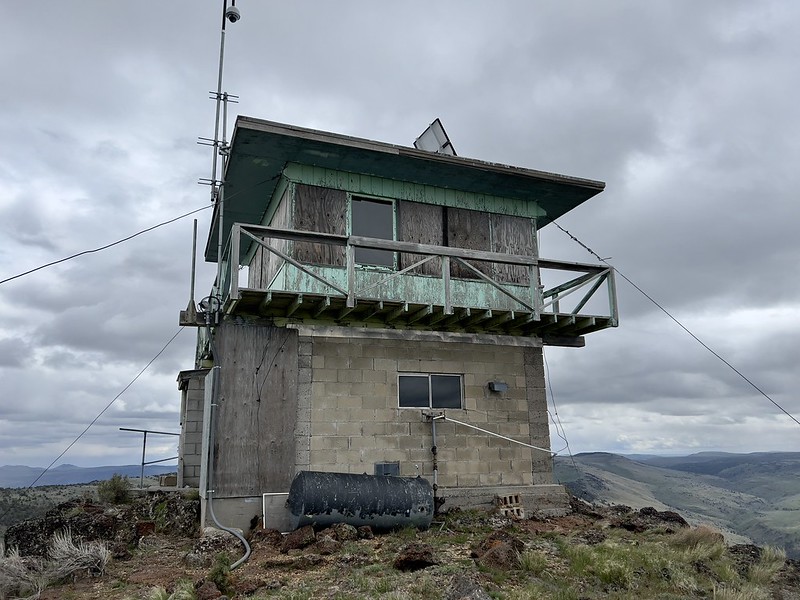 I’m not sure where they got 6,450′ from when they made this sign. That’s not what my GPS said and the official elevation on the USGS quad is 6,352′: 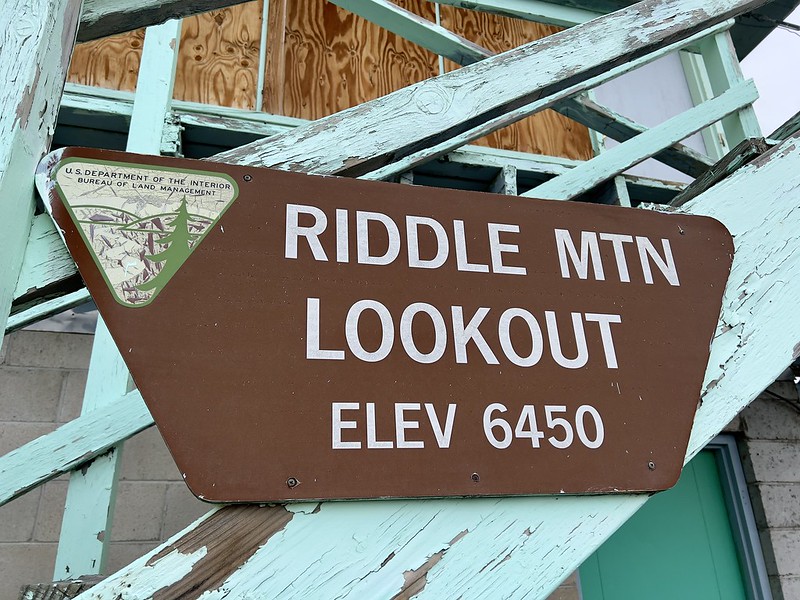 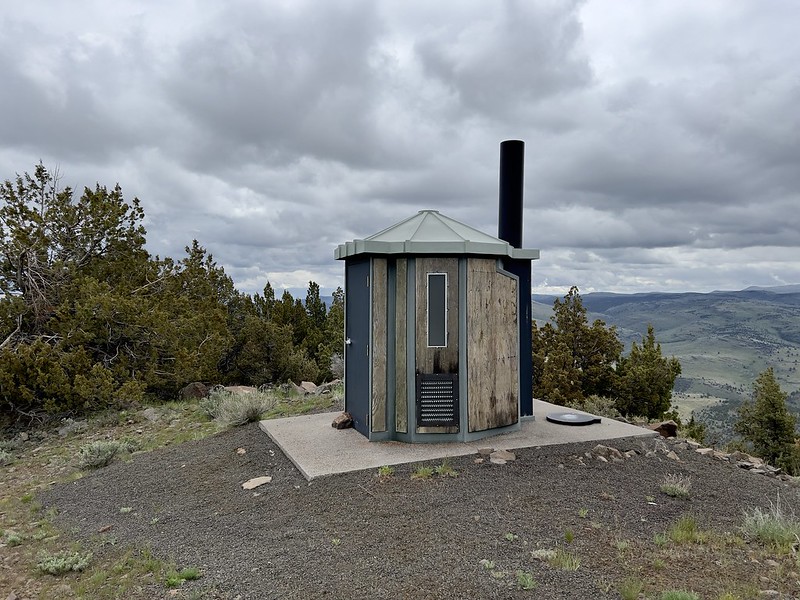 The bottom of the front door was damaged, and I think that’s rodent poop collected in the groove there: 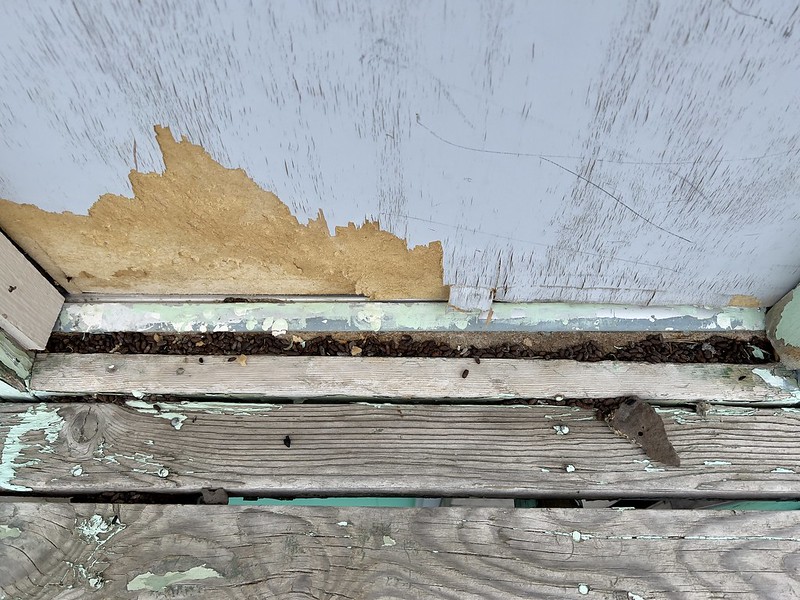 One of the window shutters was gone so I could see inside the lookout: 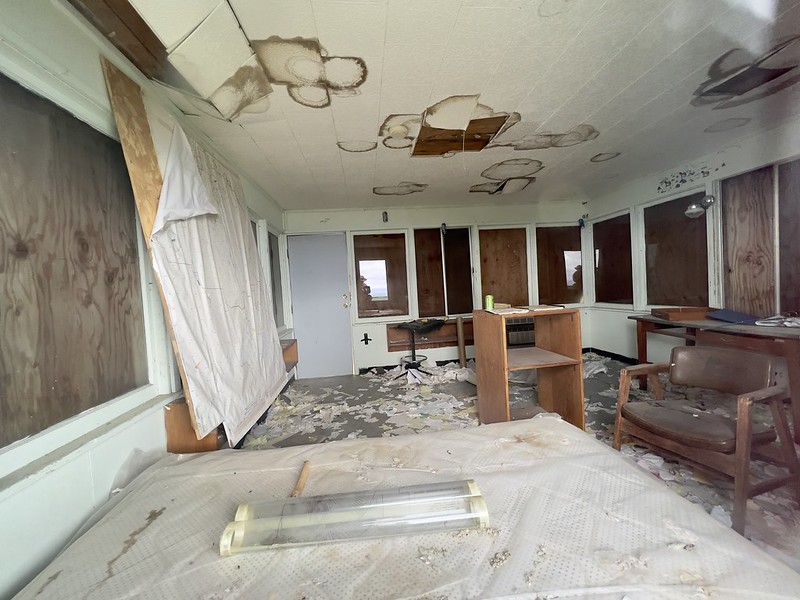 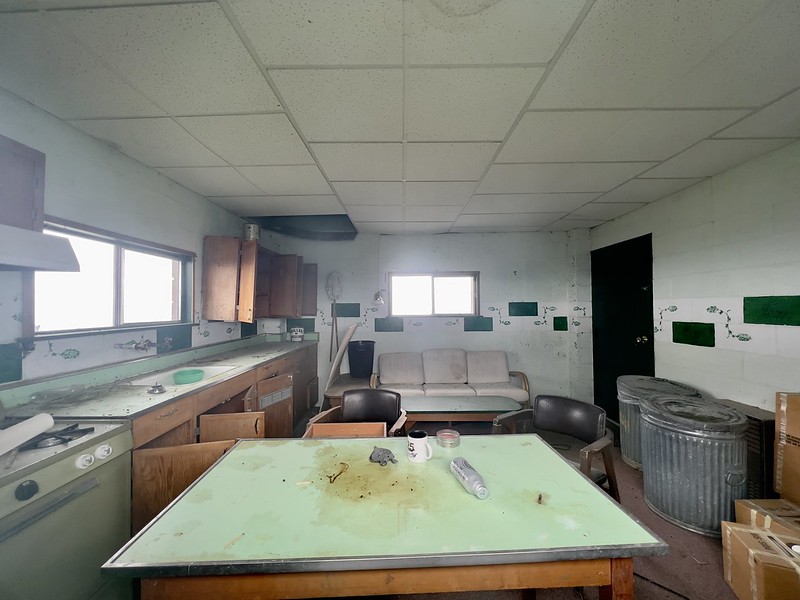 This lookout was built in 1964. Several websites state that it is used in emergencies, but that is clearly no longer the case. The lookout and downstairs living quarters are currently uninhabitable, at least by humans (I’m sure the mice are enjoying it quite a bit). There’s also no firefinder inside. A camera has been installed up here so it looks like this one is now remotely monitored (Update: here is the link to the camera view): 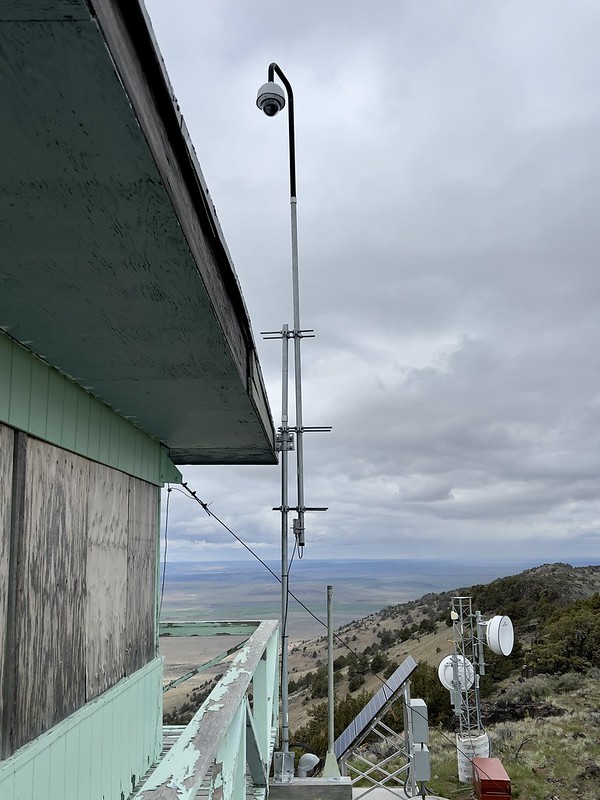 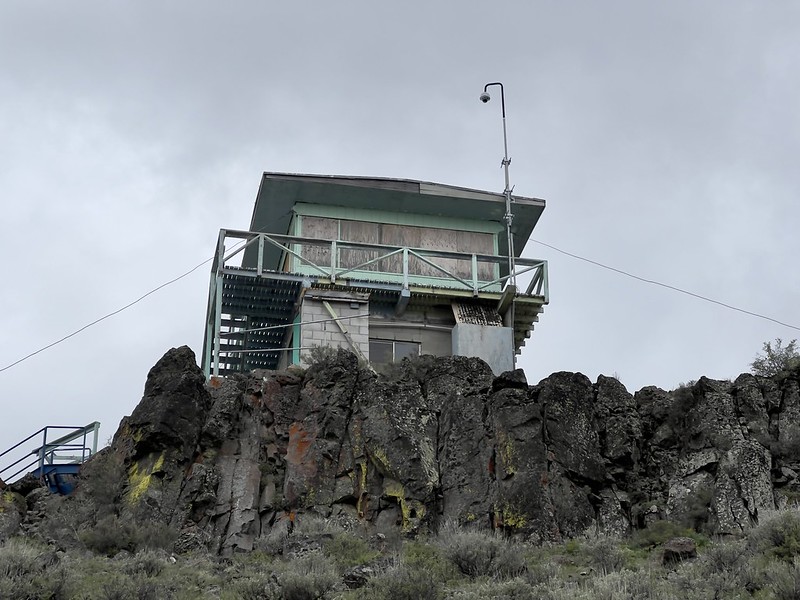 Not much in the way of views on this awful weather day, but it wasn’t a total wash. Looking west: 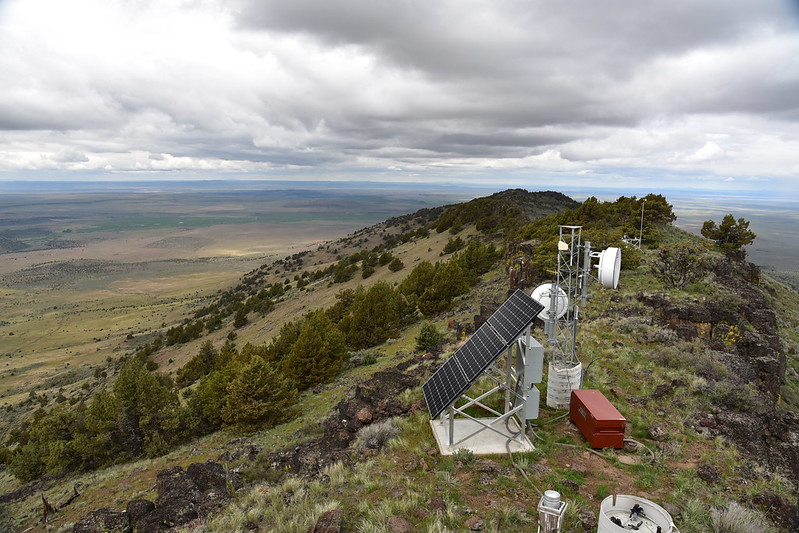 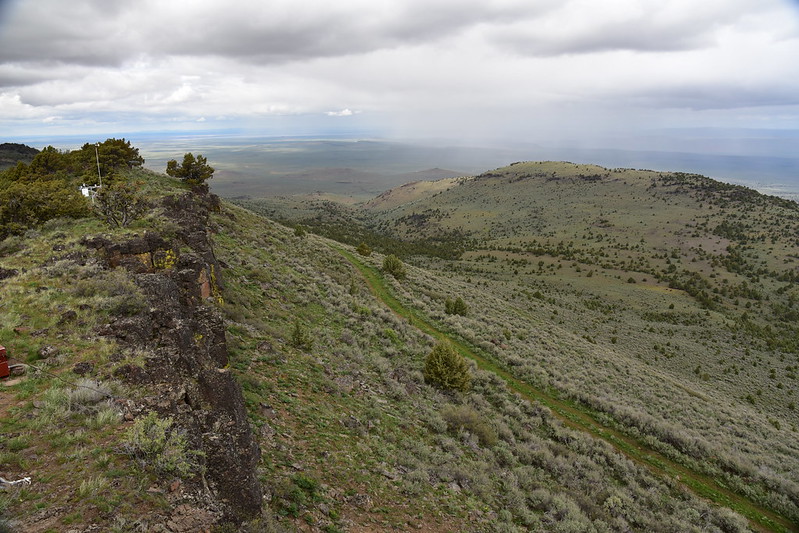 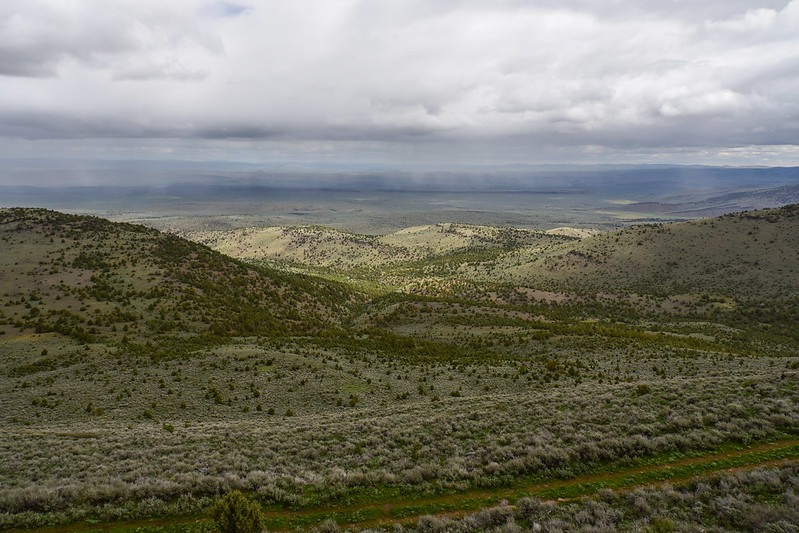 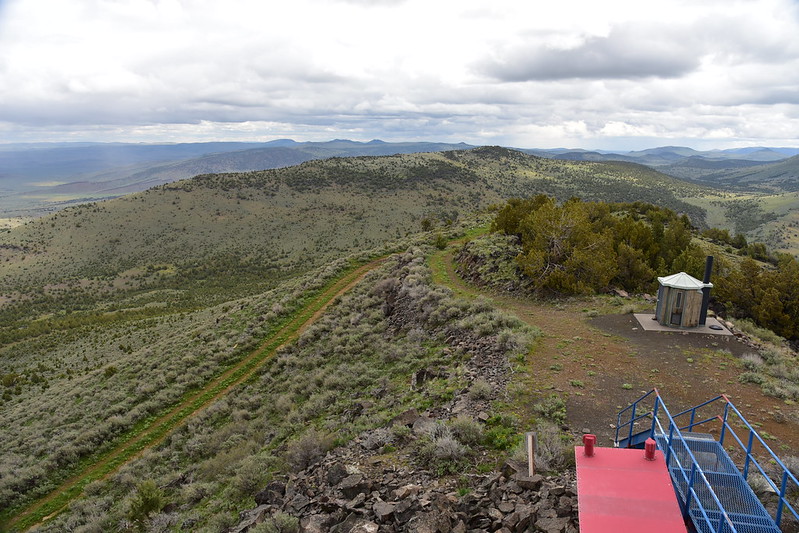 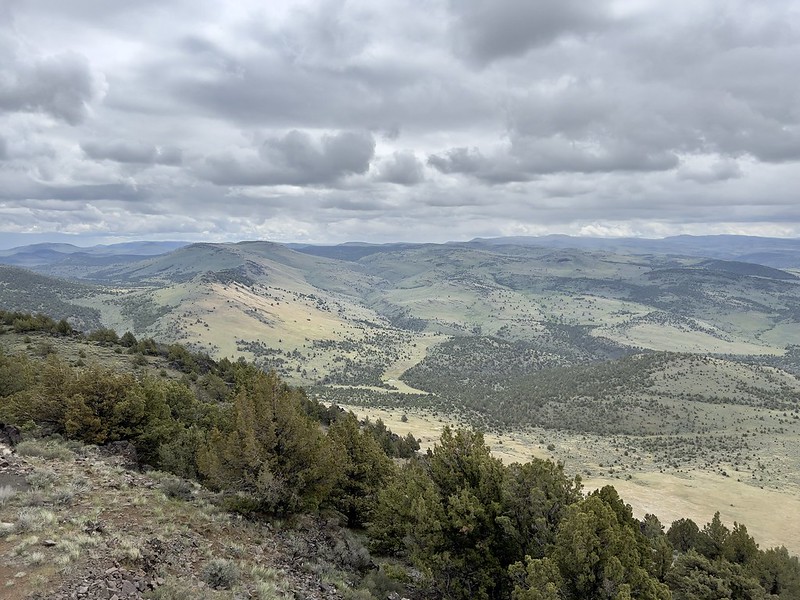 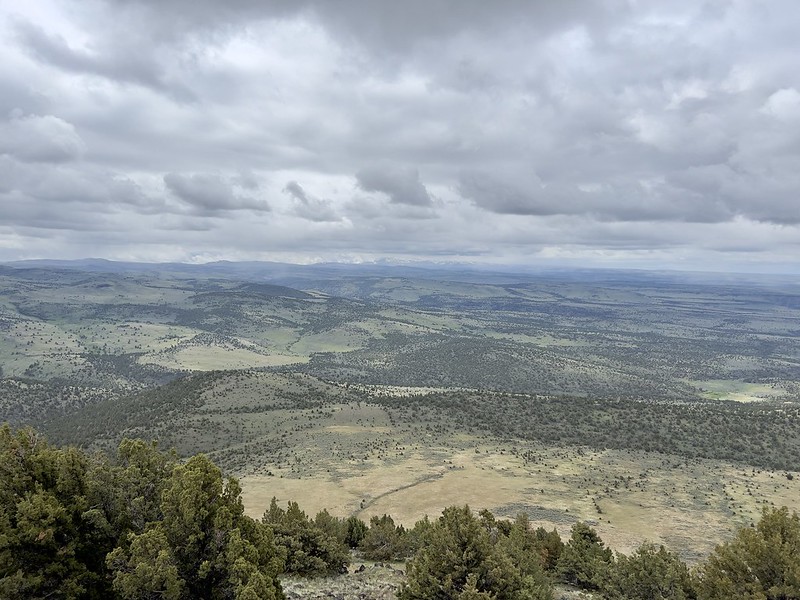 Zoomed-in on Steens Mountain to the south: 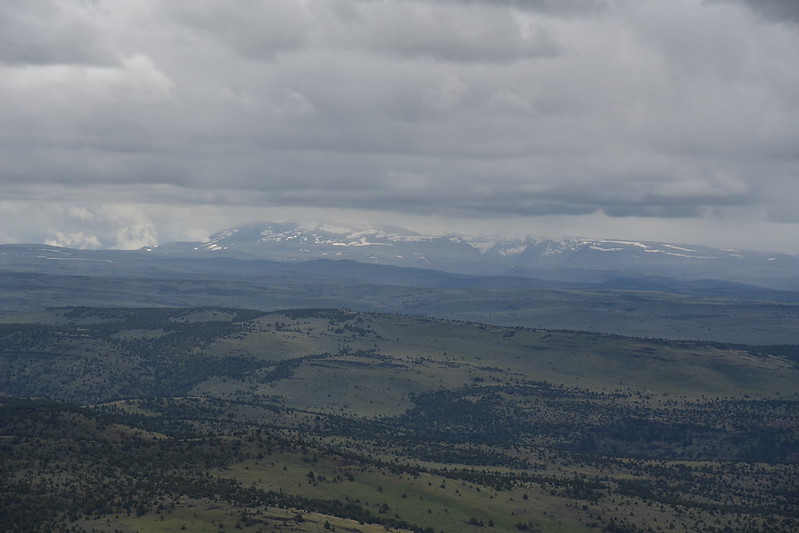 I logged the geocache on way down, and hiked back to my car. I saw a pronghorn antelope from a distance on the hike back: 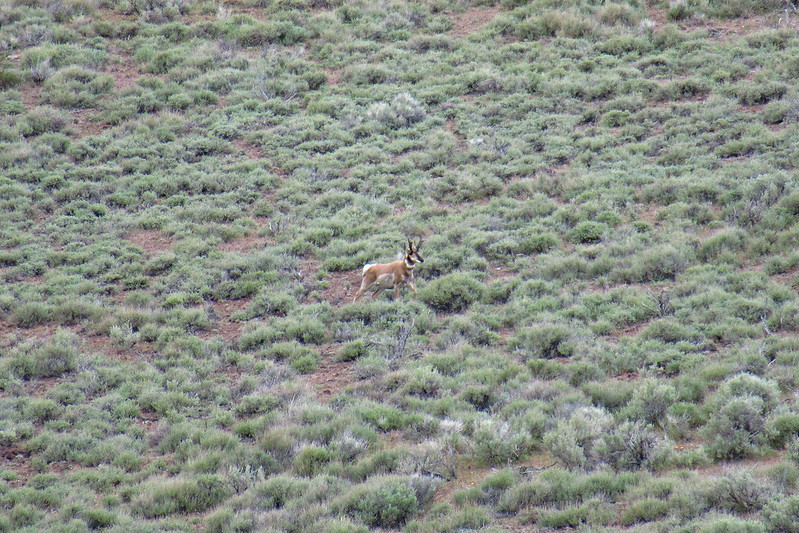 Good thing I visited when I did. As predicted a horrific storm arrived in the afternoon. Wind, torrential rain, and lightning. There was so much rain that for a little while there was flooding on the streets of downtown Burns. It’s mostly dirt road up there on Riddle Mountain and I’m sure it turned into a muddy mess.

Get yourself to the Pete French Round Barn on Diamond Craters Road. Just south of the barn and visitor’s center turn southeast onto Happy Valley Road which soon turns to gravel, then drive 2.8 miles to an unmarked junction. Turn left onto another gravel road which heads north, crosses Riddle Creek, makes a sharp right to the west, and becomes dirt. As you drive west ignore intersecting side roads and jeep tracks. It is approximately 7 miles from the unmarked junction at Happy Valley Road to the summit. I passed through two closed gates and two open gates. Whenever you pass through a gate leave it however you found it. An app like Gaia is very helpful when navigating this area.