On August 31, in response to a question on Facebook about wrapping the Bull of the Woods lookout, the Mt. Hood National Forest wrote “Due to the proximity of the fire, it’s not safe to have firefighters there for the amount of time it would take to wrap the tower. Yesterday they were able to reduce some of the vegetation near the structure, to allow it withstand the fire better.” They had also previously written that there was nowhere to land a helicopter up there.

On Saturday, September 4 this photo was posted to Inciweb, showing how close the Bull Complex Fire had gotten to the Bull of the Woods Lookout: 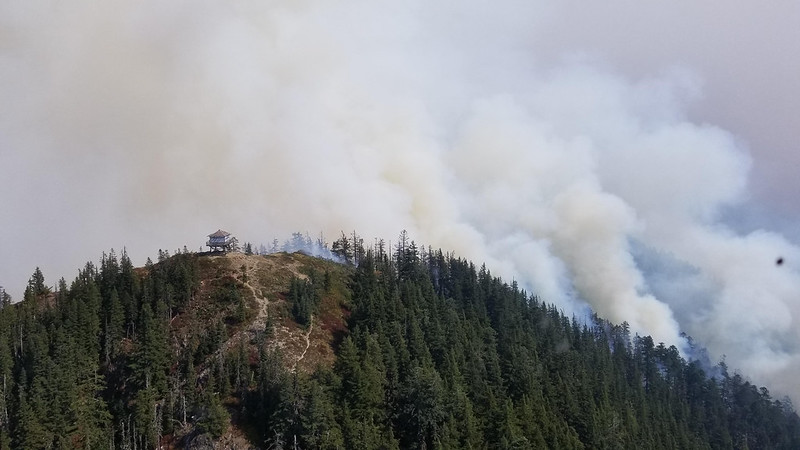 Today they put out this news release:

Sandy, Oregon, September 6, 2021 – Incident Management Team officials confirmed last night that the Bull of the Woods Lookout located within the Bull of the Woods Wilderness was lost due to fire activity yesterday. This Lookout was listed on the National Register of Historic Places and frequently visited by those who enjoy the history and background of Fire Lookouts. “We acknowledge that losing this historic Lookout is a loss that will be felt by many in the area and beyond,” said Rick Connell, Incident Commander of NR Team 4.

Over the past several weeks as the fire moved towards the historic Lookout, several actions had been taken by firefighters to protect it. Plans to wrap the Lookout in structure wrap material were made several times but had to be cancelled due to dangerous conditions to firefighter safety and the unavailability of trained personnel. Working on dangerously high and structurally compromised materials in a remote wilderness location to wrap a structure requires firefighters who are specifically trained for that type of work. If a person falls from a high surface without appropriate fall protection training and equipment the consequences could be severe. The extremely steep terrain on all sides of the Lookout’s location also creates dangerous wildfire conditions where fire can move quickly uphill without warning. The combination of safe forecasted fire behavior conditions and trained personnel needed were never able to converge for structure wrapping. The safety of the public and firefighters is always the highest priority in fire response.

On August 31 a helicopter rappelling fire crew flew to the site and cleared trees and brush around the Lookout to make it more defensible. The crew could not safely remain at the site since it was on steep terrain directly in front of the approaching fire. For the past six days numerous hours of helicopter flight time had been used to drop water to slow the movement towards and intensity of the fire near the lookout. Yesterday, smoke obscured visibility on the north side of the fire and it wasn’t safe to fly aviation in that area.

On September 5 fire activity increased on three slope aspects below the Lookout and made fast uphill runs creating a heavy fire ember shower at the Lookout site. This type of fire behavior is what was concerning for firefighter safety every time the discussion came up about firefighters working at the Lookout site. A smoke inversion and active fire behavior limited visibility for aircraft to safely fly and limited the tactical operations that could be performed for fire suppression. There are no safety zones or roads near the Lookout for firefighters to safely engage in firefighting on the ground. The fire was also making a push and threatening multiple values at risk on other portions of the fire at the same time.

It is disappointing to see a historic structure like this Lookout destroyed by fire. However, many photos and stories have been preserved to continue to tell the story of the Bull of the Woods Lookout for years to come.

The Bull of the Woods lookout was built by the Civilian Conservation Corps in 1942 and replaced an earlier lookout that had stood there. The classic L-4 lookout was staffed into the 1960s but hasn’t been used in decades. It was considered for inclusion on the National Register of Historic Places in 1993. Although that never happened you can see the Inventory Form on the state’s website that includes a lot of the history and background of the lookout.

According to Oregon Geographic Names the origin of the name is unclear:

One account asserts it was named for a nearby mining claim or prospect, but Ron Burnett, in an article in Mazama, April 1979, p. 3, relates that William R. Bagby of the hot springs family once shot a large bull elk and told his friends: “I got the Bull of the woods.” Regardless of the application, “bull of the woods” is an old logger’s term. Walter F. McCulloch, in Woods Words, p. 21, gives three definitions, all relating to big or important men in the logging industry.