From the trailhead at Chetco Pass it’s a 2.7 mile hike to reach Pearsoll Peak, assuming your car can make it up the rough road, and if it can’t you’ll have to hike 4.5 miles from McCaleb Ranch (the Boy Scout camp at the bottom of the road) up to the pass. I had the misfortune of running into the ranch’s caretaker who dissuaded me from attempting to drive the road in my Subaru Outback. I made a mistake in assuming he knew what he was talking about so I walked the road, only to discover that while it’s definitely rough, a high-clearance AWD Outback could definitely handle it. You can read more details about the hike on my adventure blog.

Another note: there’s a gate at the bottom of the road that is only open in the dry season (generally June through September) in order to keep out the root disease that kills Port Orford Cedar. The sign on the gate says “The area behind this sign contains valuable stands of Port Orford Cedar. Vehicle traffic during the wet season can spread the disease.” 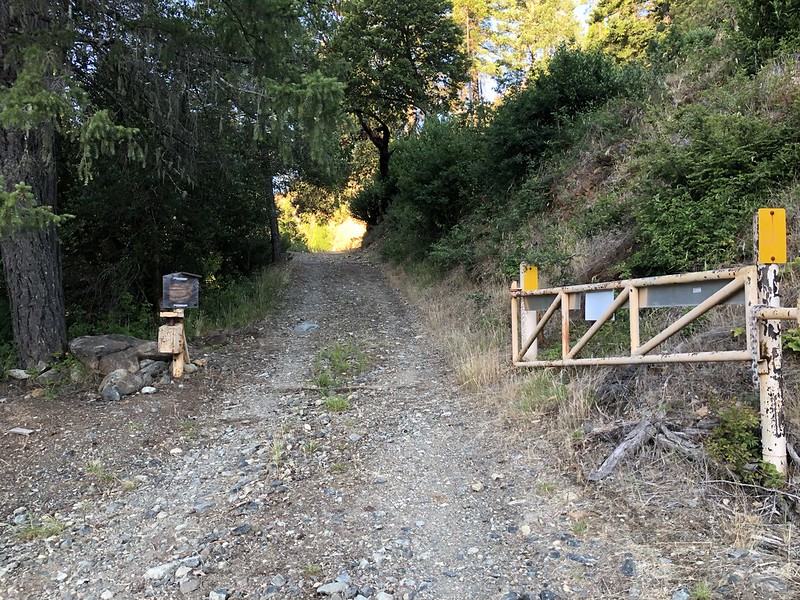 The lookout sits on a prominent peak at the edge of the Kalmiopsis Wilderness. The wilderness boundary actually goes up and over the summit of the peak, although the cabin itself is just outside the boundary: 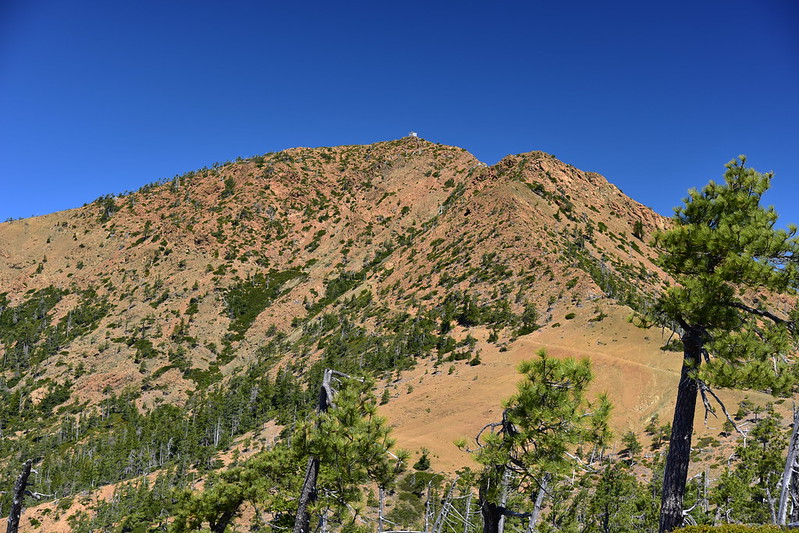 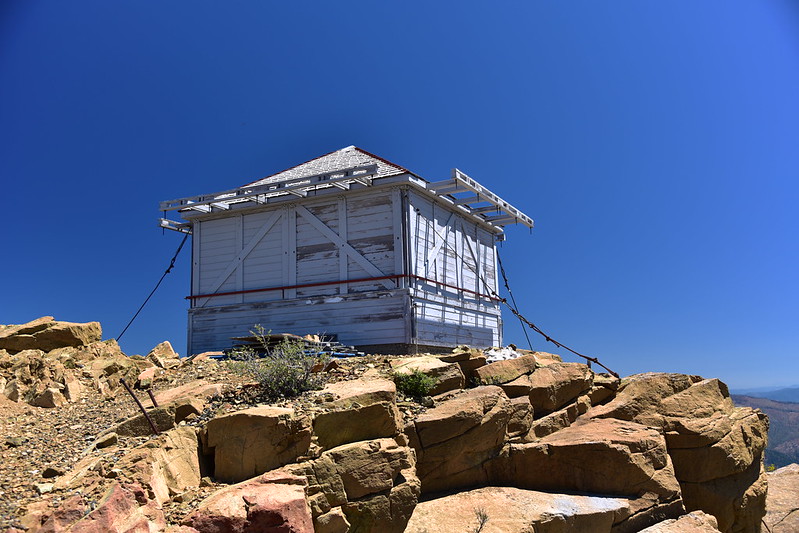 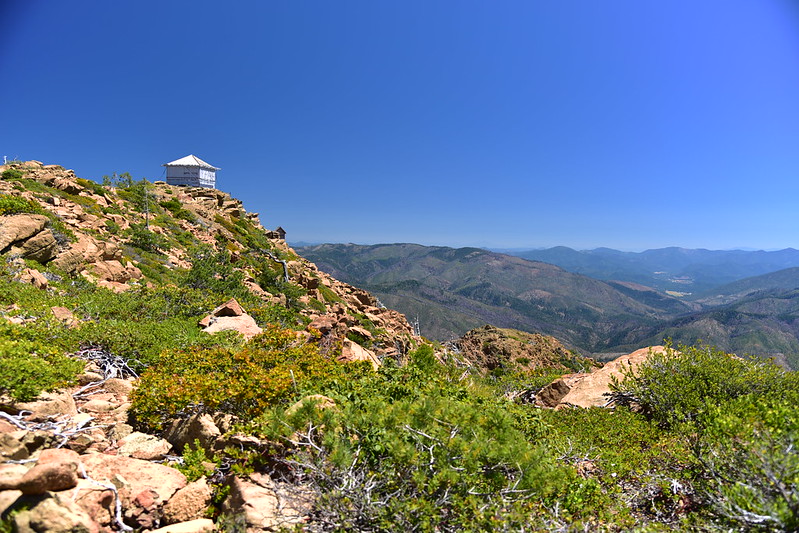 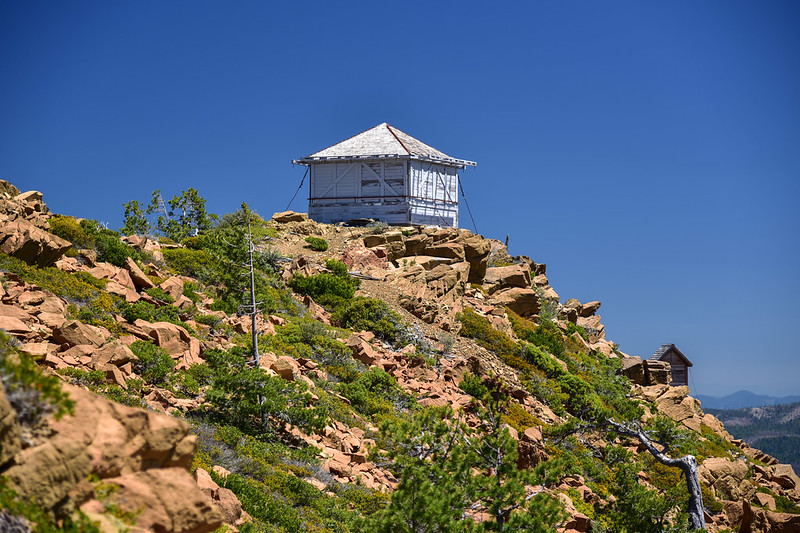 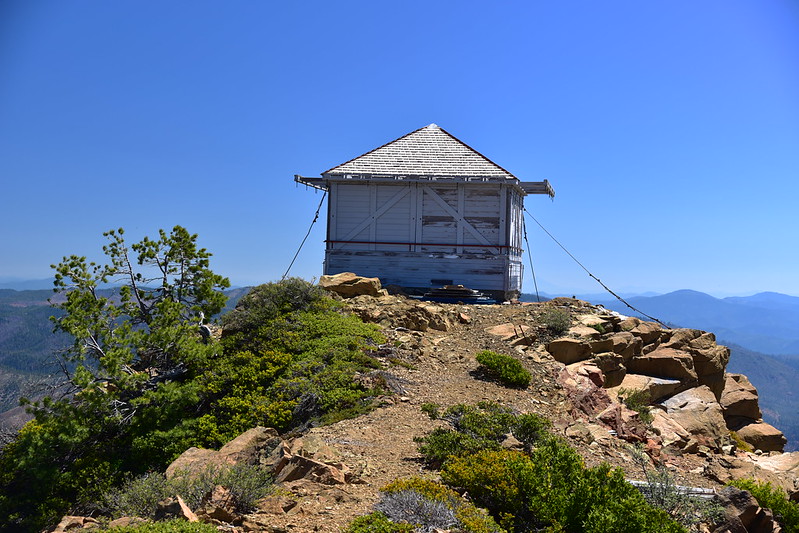 It has a cute little loo just below the summit. It was very very windy and I did not scramble down there to check it out: 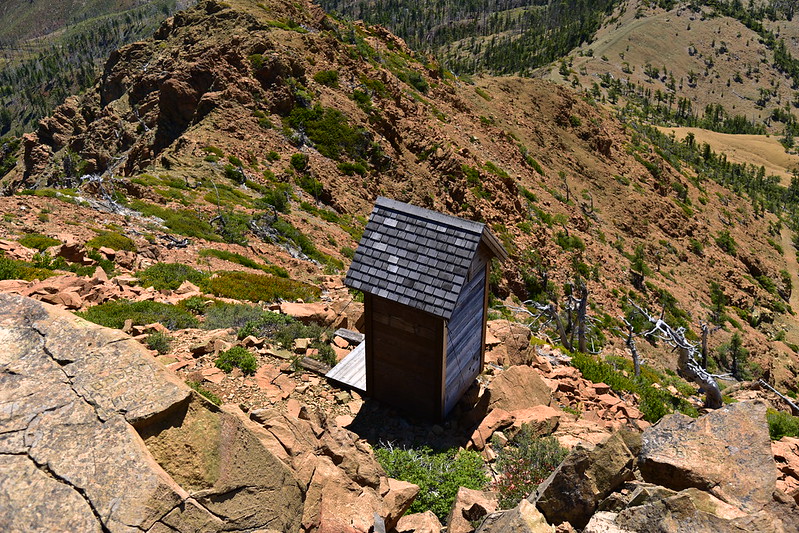 I’m guessing these names carved into the rock are from the people who staffed the lookout back then: 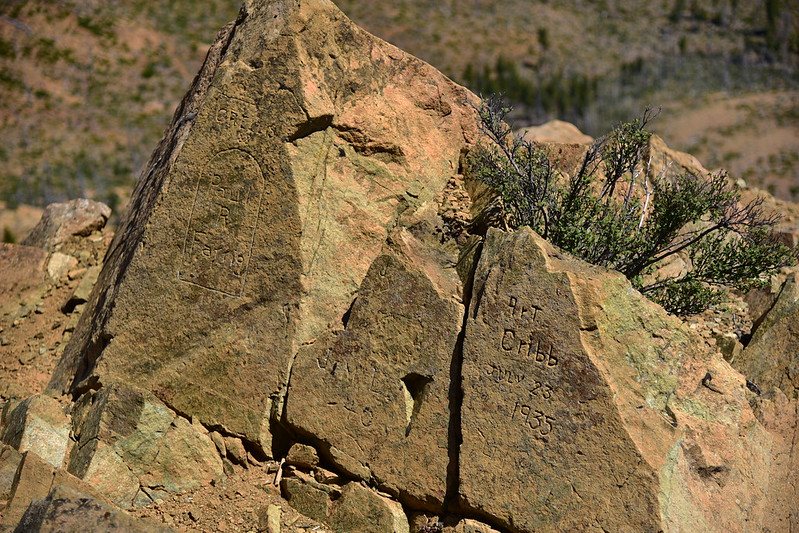 The 360-degree views are impressive, although a majority of the landscape around here has burned in fires (the 2002 Biscuit Fires, the 2017 Chetco Bar Fire, and the 2018 Klondike Fire). Looking west (with the Pacific Ocean just visible): 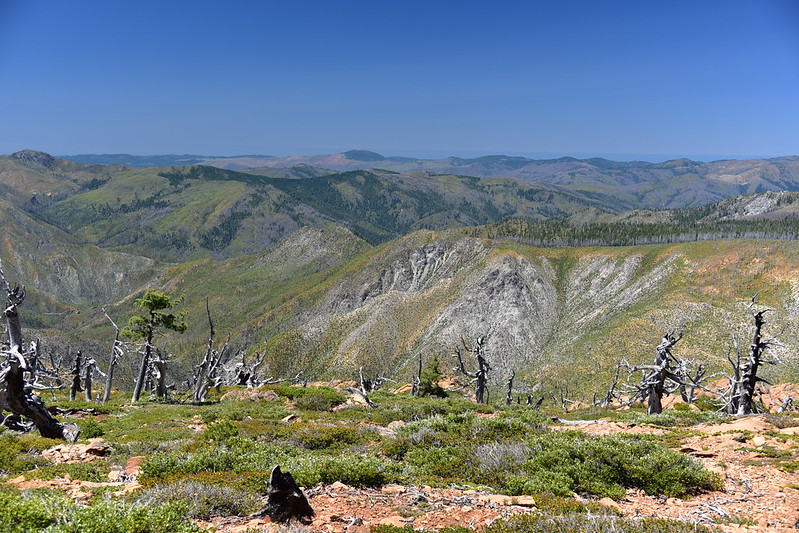 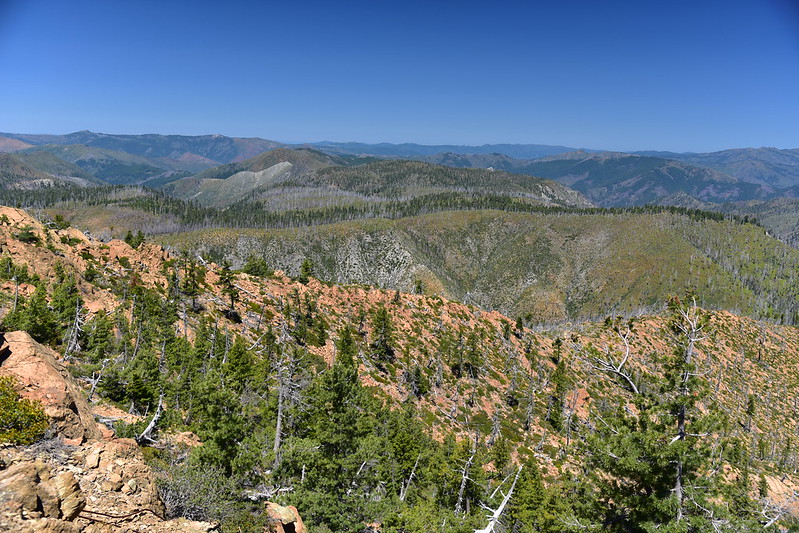 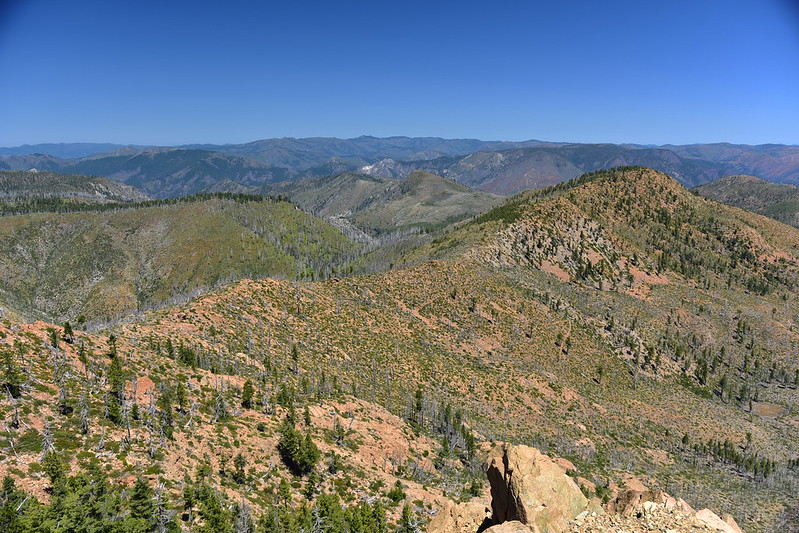 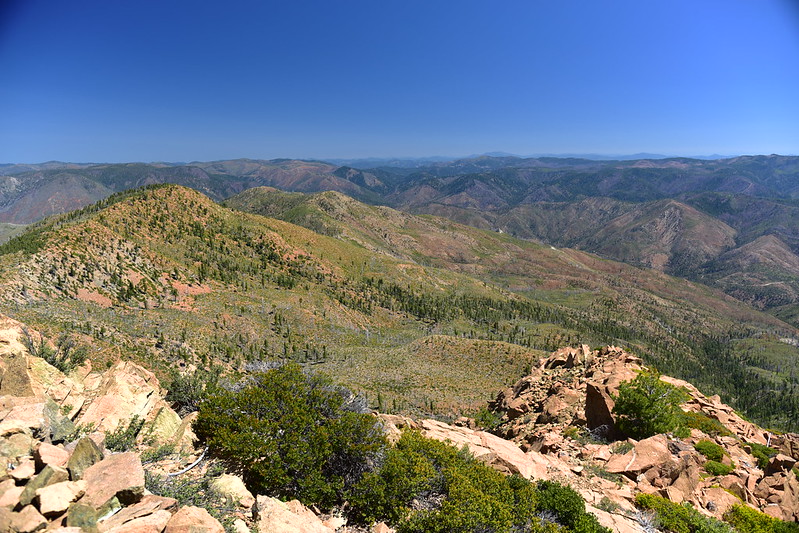 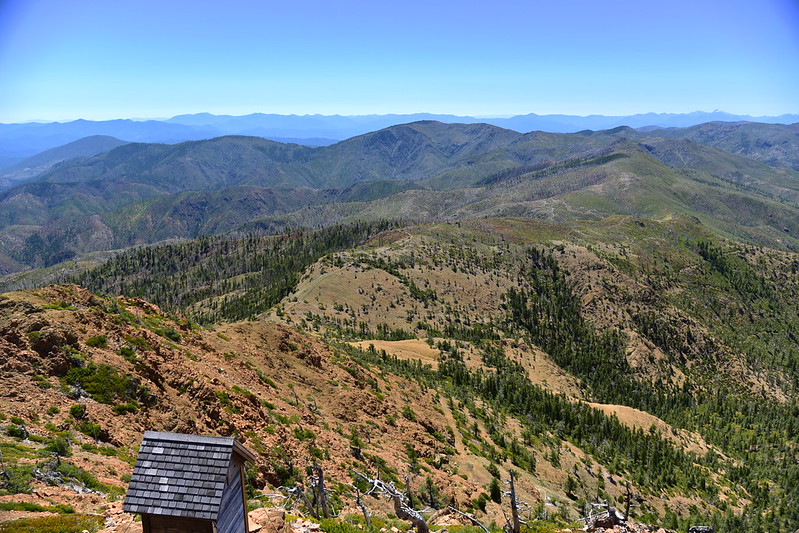 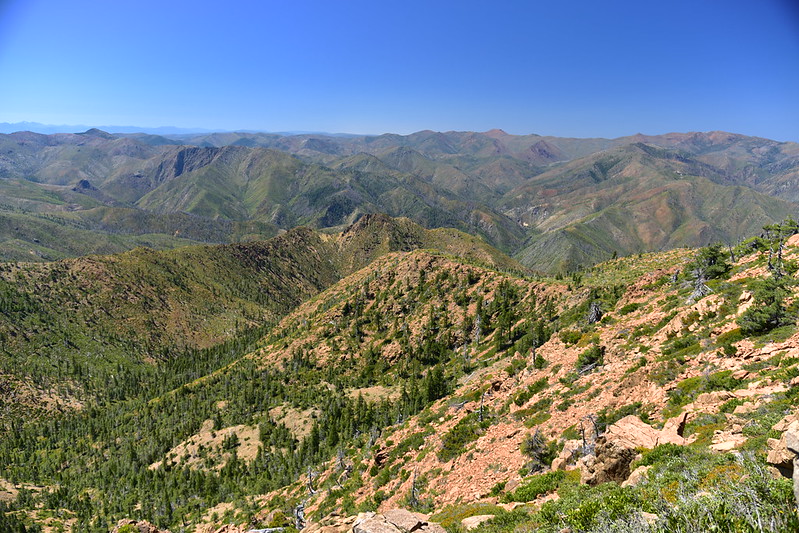 The first lookout on Pearsoll Peak was a D6 cupola cabin that was built in 1920. In 1954 it was replaced with the lookout that still stands on the site. It fell into disrepair, but the Sand Mountain Society has done quite a lot of work at this lookout. The first restoration phase started all the way back in 1991: 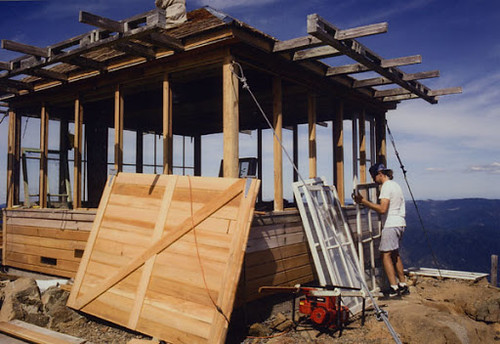 You can read all about the restoration on their website, but this gives you an idea of the meticulous work they have done:

The floor was carefully pulled-up and catalogued (so that it could later be re-laid in the same sequence) and then hauled in bundles to the trailhead. The flooring was then conveyed to Portland where the paint was painstakingly removed by SMS volunteer Tim Nidever over the following winter using a steam process. In 2012, the Team hauled the flooring back to the lookout and re-laid it with the proper orientation. A clear varnish was used (as originally in 1954) to allow visitors to enjoy the beauty of the wood grain.

Some information online claims that you can reserve the cabin to stay in by calling the ranger station so I called the Wild Rivers Ranger Station afterwards to ask about this. They said that is not correct and that the lookout is not set up for overnight stays but that people could go inside and look around. I told him it was locked up, and he said there was a group doing some repairs and that once they were done the lookout would be open and unlocked.