I’ve learned that the Signal Tree Lookout on Kenyon Mountain was torn down in May. This is from the Autumn 2011 issue of Lookout Network (published by the Forest Fire Lookout Association).

On May 26, log truck driver Rod Gould took a wrong turn and ended up at Signal Tree Lookout near Camas Valley where, to his surprise, a crew of about fifteen was getting ready to cut the tower down, since it had not been staffed for a few years and Coos FPA is now using the camera system. By the time Rod got his load of logs and started back down the mountain the 50-year old local landmark was on the ground. The Oregon FFLA chapter was not allowed to assess for salvage of any materials without liability insurance.

The lookout was in the jurisdiction of the Coos Forest Protective Association who is using cameras on Kenyon Mountain rather than the lookout. One less tower I’ll be visiting. 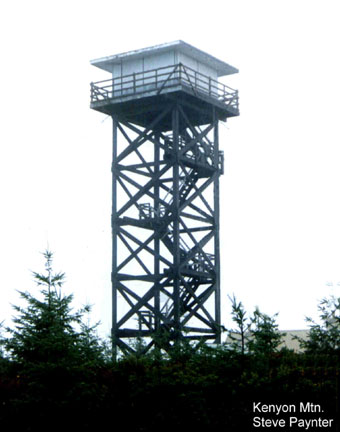 A 1999 photo of the Signal Tree Lookout (firelookout.com)